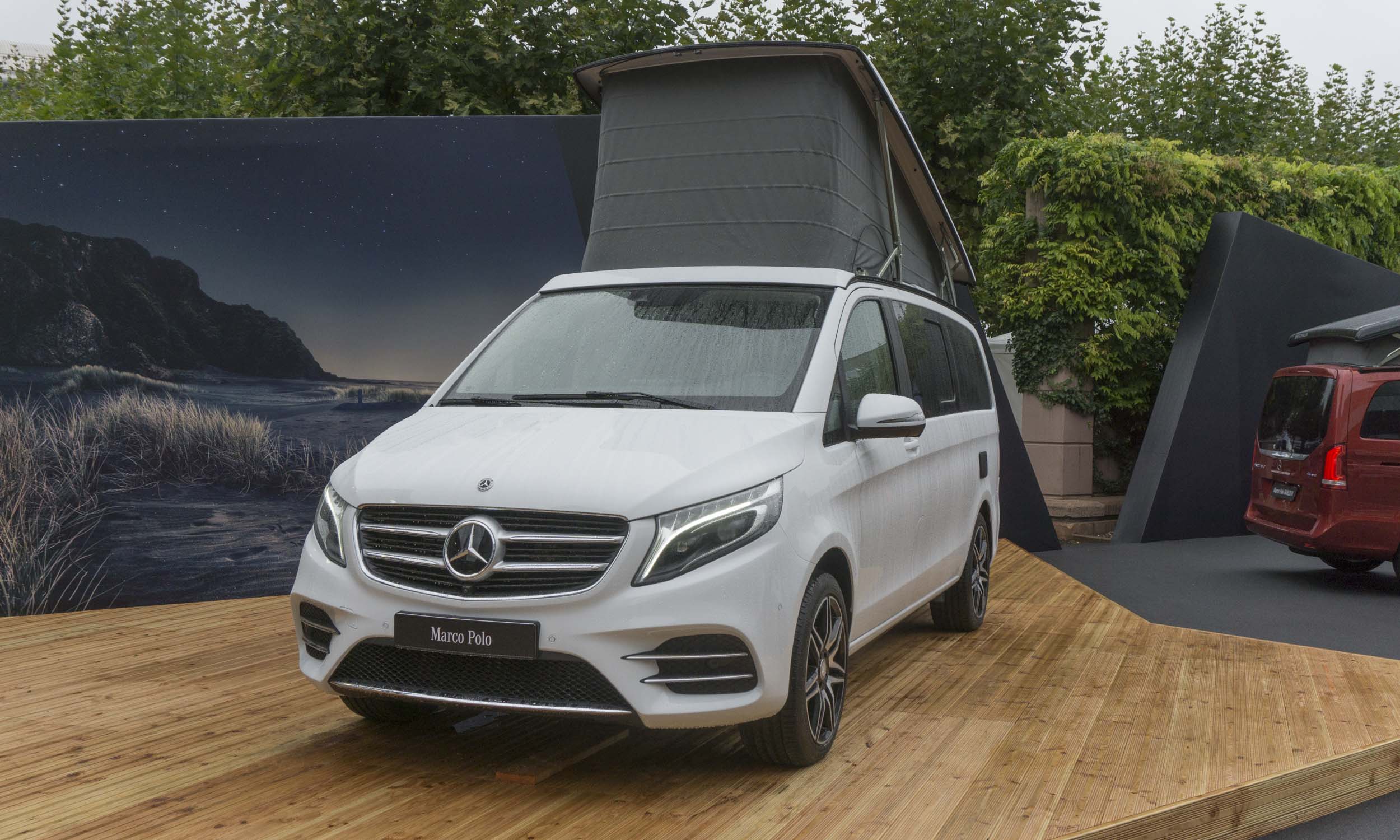 © Perry Stern, Automotive Content Experience
Van Versatility
One great aspect of attending auto shows around the globe is getting the chance to see vehicles in automotive segments that are either nonexistent in the States, or their market share is so small they barely get on the radar. There’s plenty to see at an international auto show such as Frankfurt, but in addition to the exciting concept cars, extreme sports cars and high-end luxury models, there are some outstanding vans on display. Granted, vans and minivans get little to no attention in America since they comprise one of the smallest segments of the massive automotive market. But vans are big in Europe — both figuratively and literally. We looked around the 2017 Frankfurt Motor Show and discovered some unique and interesting vans that could redefine the art of moving people — if the rigs were coming to America — but we feel obligated to point out that most of the following vehicles are currently unavailable in the U.S. 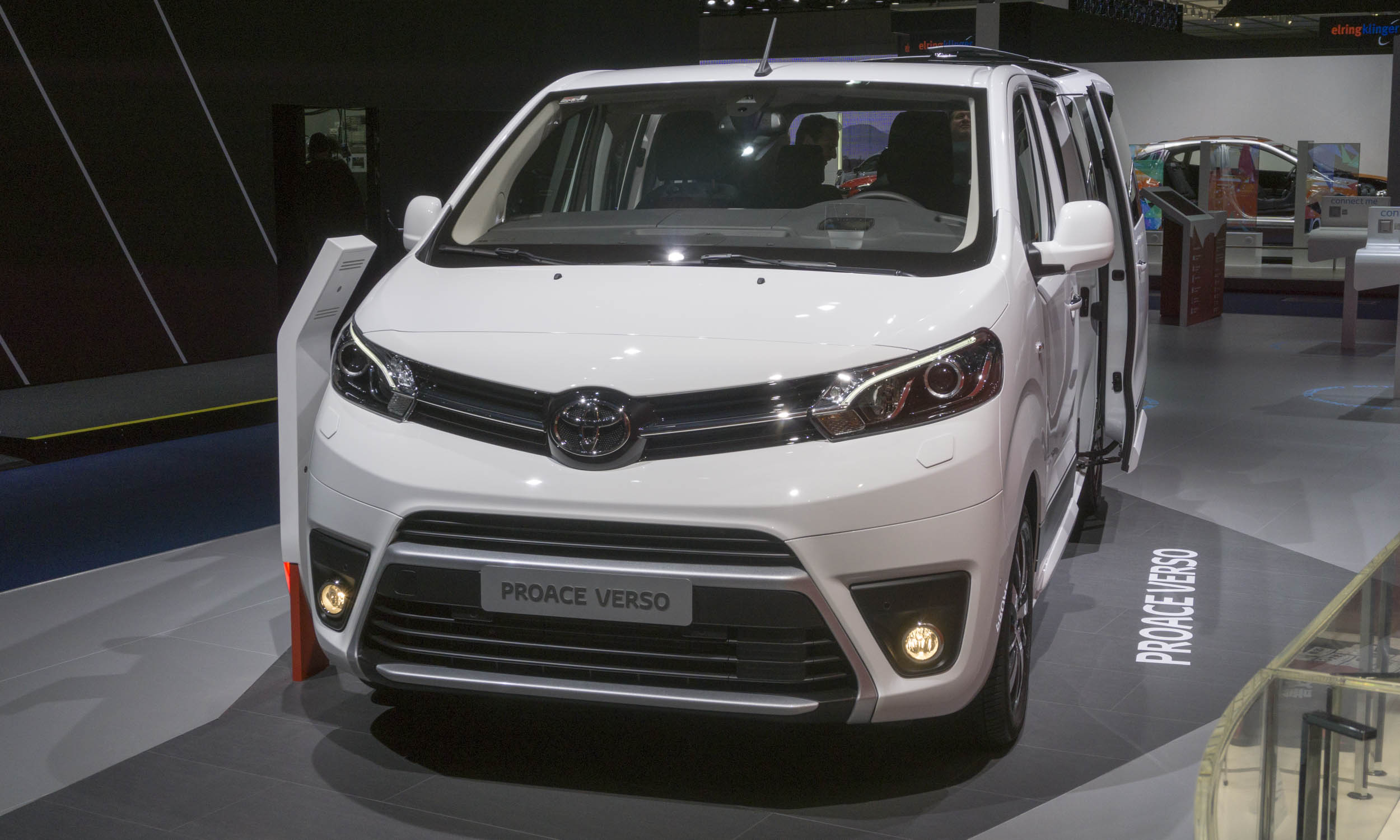 © Perry Stern, Automotive Content Experience
Toyota Proace Verso
In America Toyota promotes the popular Sienna to minivan buyers, but in Europe the Japanese automaker offers the Proace. This versatile van is available in many configurations, ranging from cargo van to the Proace Verso, which was on display at the Frankfurt show. Larger and boxier than a Sienna, the Proace Verso can be configured with a wide variety of features, including a dual-mode rear cargo hatch, automatic sliding side doors and a line of fuel-efficient diesel powertrains. 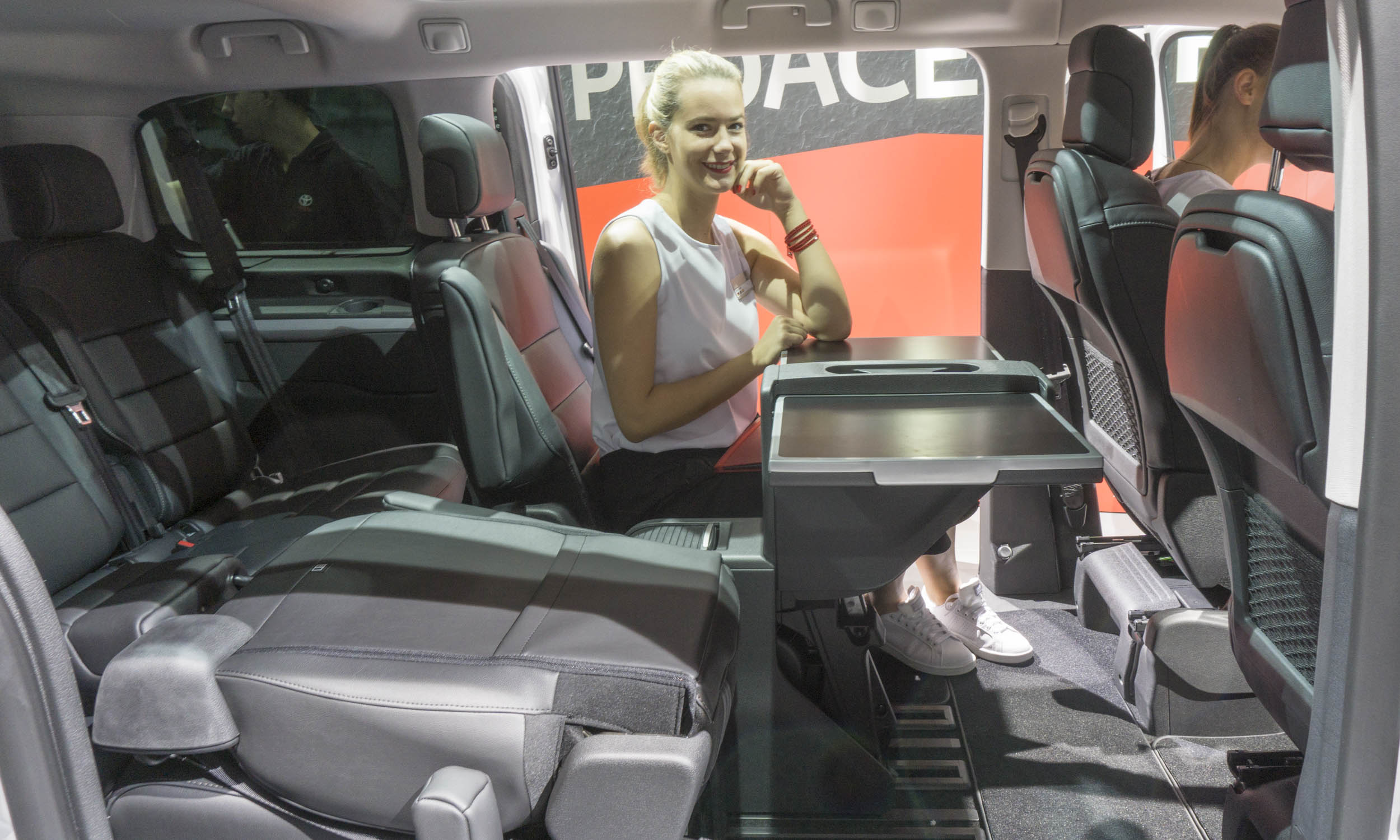 © Perry Stern, Automotive Content Experience
Toyota Proace Verso
Inside the Verso, Toyota crafted a creative travel space. The large van can accommodate three people across without feeling cramped, and second-row seats can rotate to face forward or backward. A second-row center console provides storage as well as folding tray tables. All seats slide on tracks in the floor, so the van’s floorplan can be easily adjusted. A larger version of the Proace also is available, adding an additional foot of length for increased passenger or cargo space. 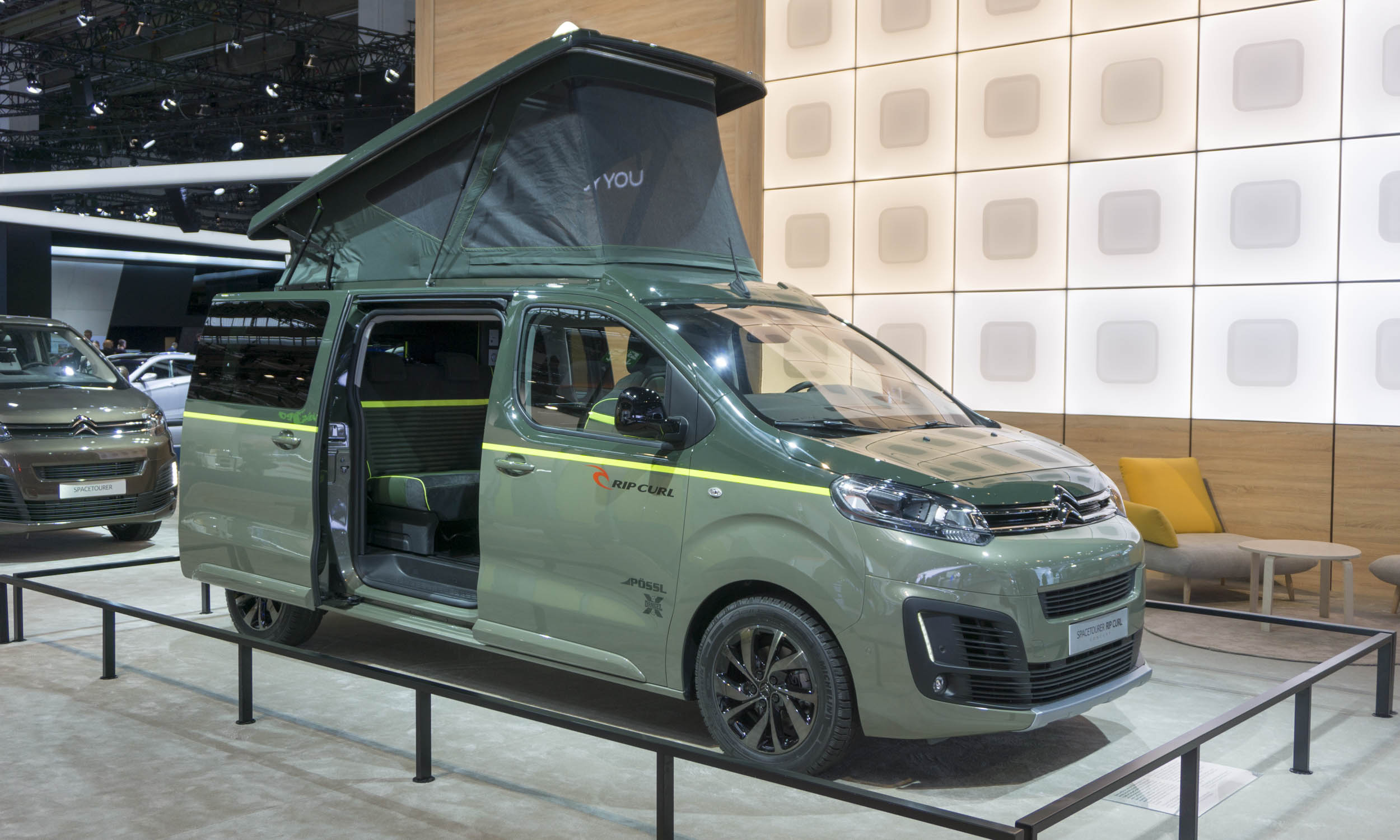 © Perry Stern, Automotive Content Experience
Citroen SpaceTourer Rip Curl Concept
French carmaker Citroen teamed up with Australian surfing outfitter Rip Curl to create the ultimate surf camping van. Based on the Citroen SpaceTourer, the Rip Curl Concept has been configured with a 4-wheel-drive system, enabling access to more remote locations when heading out for adventure. After reaching a destination, wave hounds can automatically raise the roof to create a hard-topped tent space above the van. 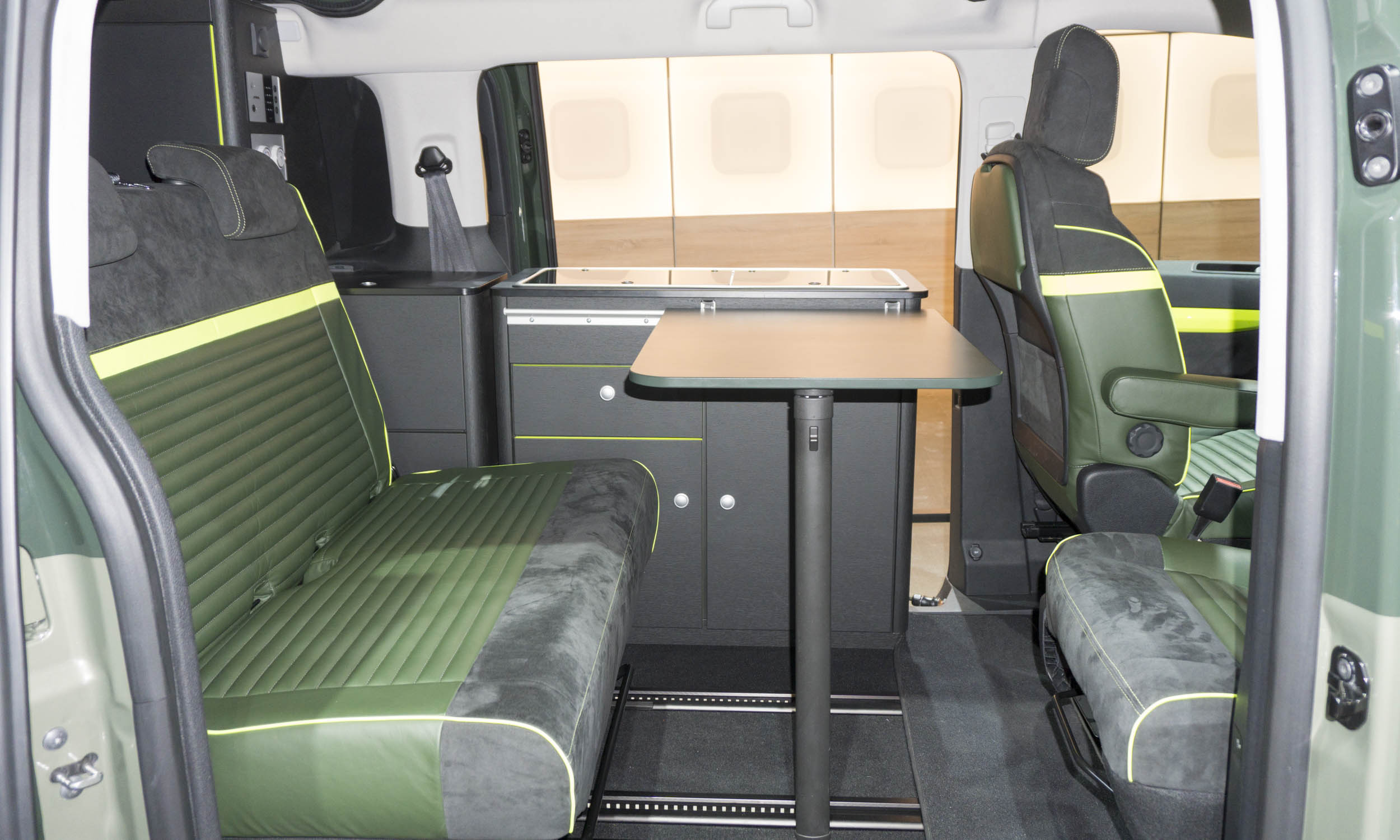 © Perry Stern, Automotive Content Experience
Citroen SpaceTourer Rip Curl Concept
A green two-tone exterior theme with a high-vis yellow stripe carries through to interior materials and design. Seats can be configured multiple ways —facing the folding middle table, or they can be folded down into sleeping position. With the tent above, the SpaceTourer has room to sleep four. An integrated kitchenette with a gas stove and sink complete the camping space. Although the SpaceTourer Rip Curl Concept is simply that — just a concept — it would certainly make an excellent camper van. 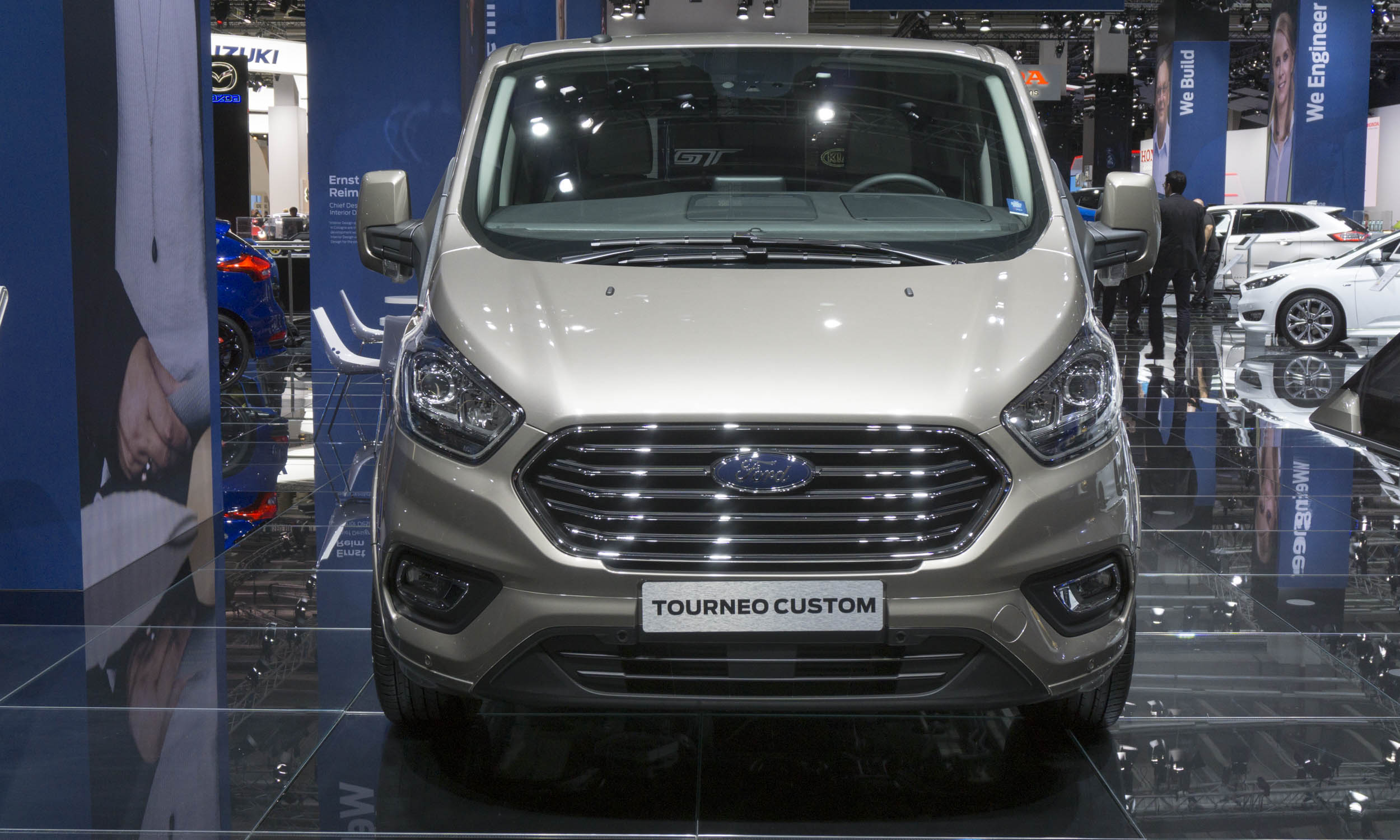 © Perry Stern, Automotive Content Experience
Ford Tourneo Custom
The Ford Motor Company sell vans in America – quite successfully, too. The Transit and its smaller sibling Transit Connect can be configured for myriad tasks, businesses and people-hauling duties. In Europe Ford also sells a van that slots between those two U.S. models in terms of size. The Tourneo Custom has a style common in Europe — at best defined as boxy. But boxy makes for excellent interior space. 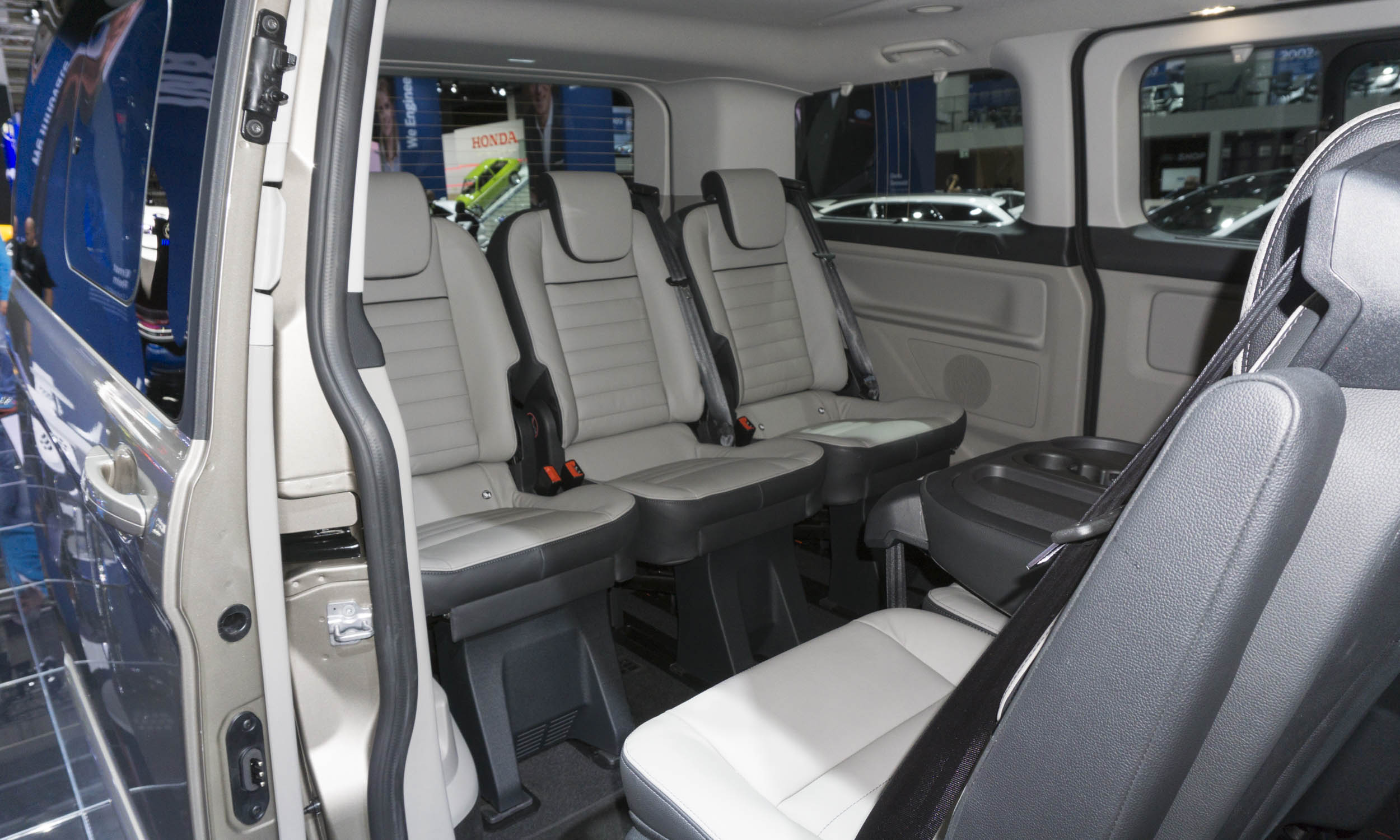 © Perry Stern, Automotive Content Experience
Ford Tourneo Custom
Inside the Torneo Custom, Ford offers 30 different ways to arrange the seats, providing seating in the rear for up to six passengers in spacious comfort. Seats can be set facing each other, and if a table surface is needed, any of the seatbacks can be folded to provide a flat work surface. This creates a perfect space for the family, or even a business meeting on the road. Even with all seats in use, there’s still a decent amount of cargo space in the rear. If space remains at a premium, all of the Tourneo Custom’s seats can be folded and rolled forward for additional cargo space — or removed if necessary. 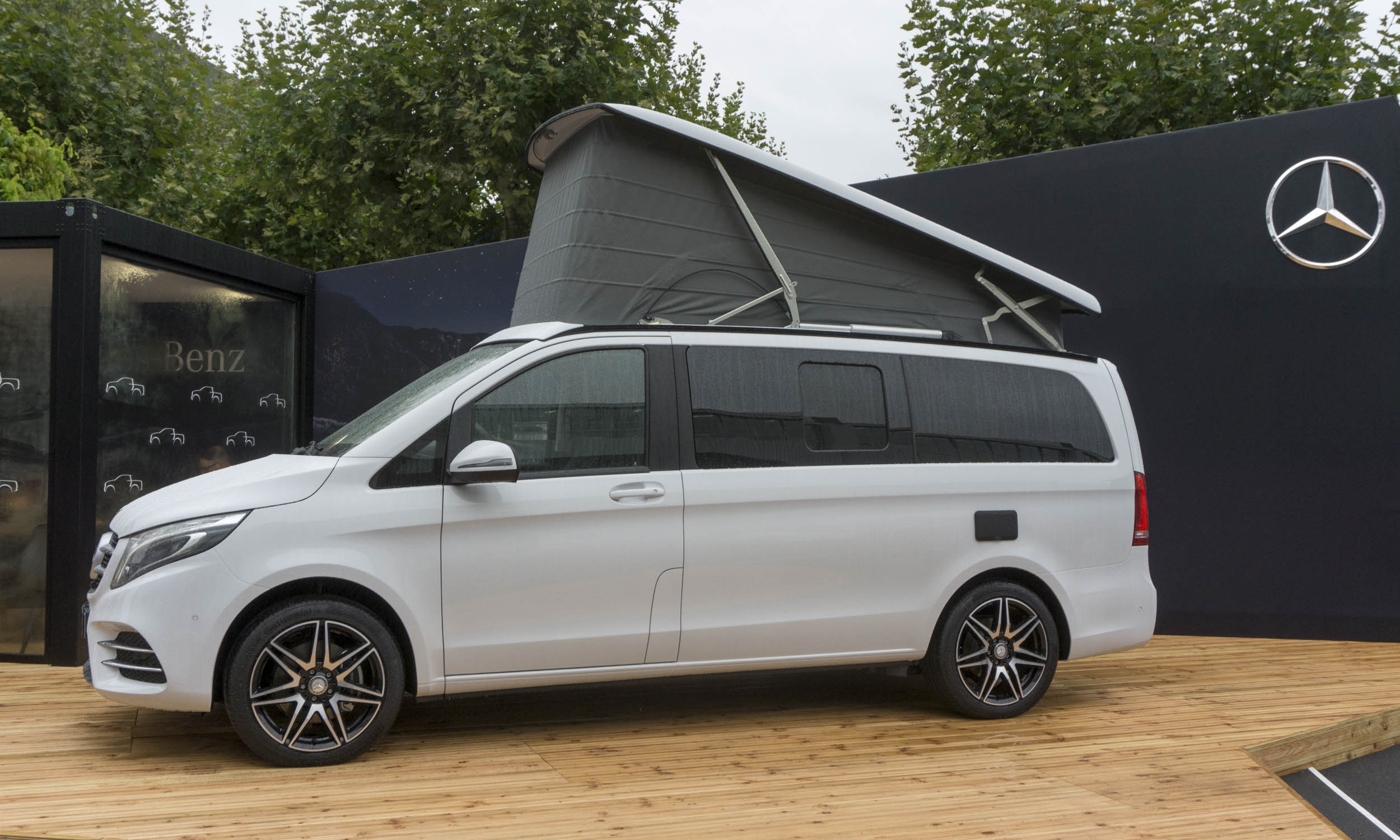 © Perry Stern, Automotive Content Experience
Mercedes-Benz Marco Polo
In America Mercedes-Benz is known for building high-end luxury and performance sedans, crossovers and SUVs, but in Europe the types of vehicles offered are a bit more varied. For example, we wouldn’t typically think of the German car company building a camper van, but they do and it’s called the Marco Polo. Based on the Mercedes-Benz V-Class van — another Europe-only offering — the Marco Polo is built in partnership with camper builder Westfalia. 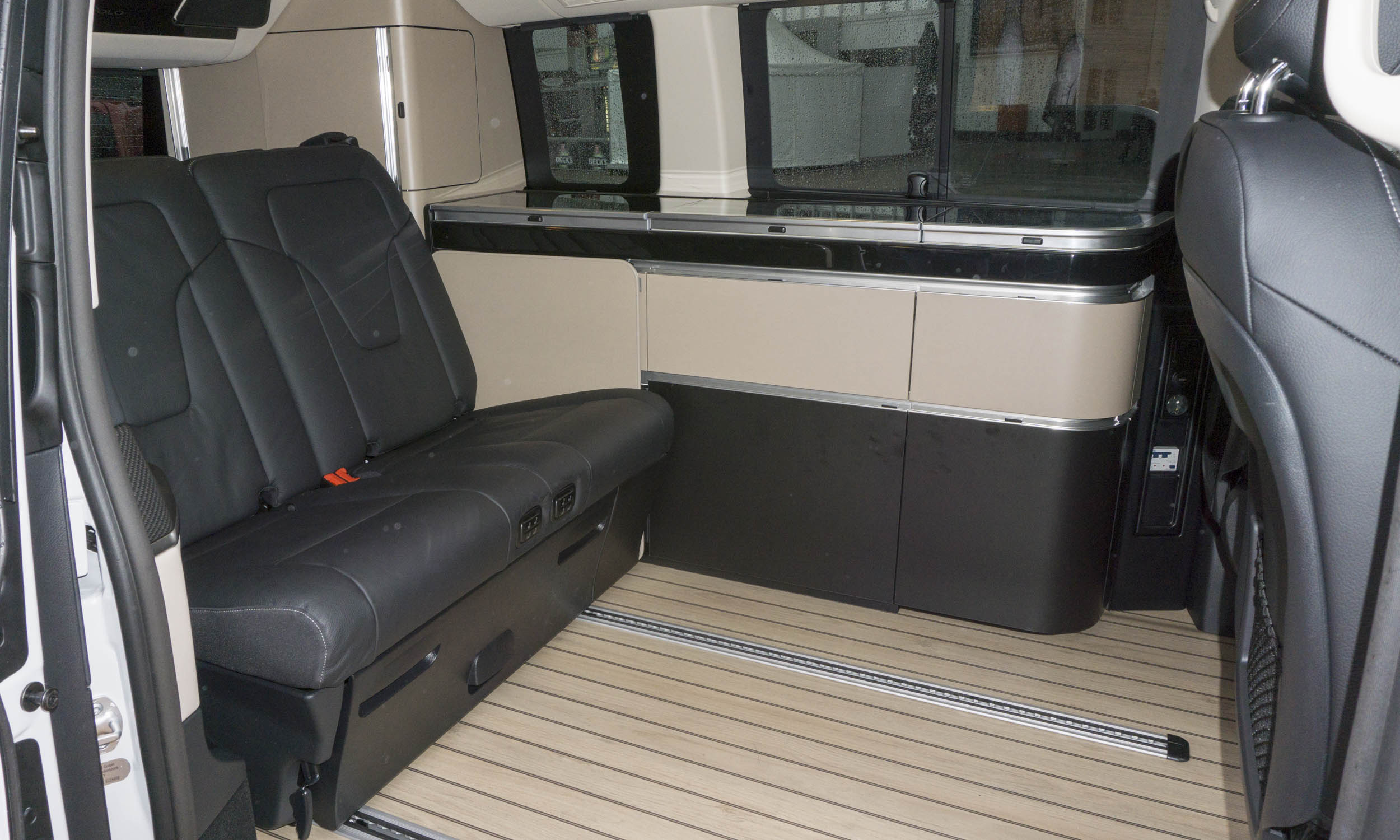 © Perry Stern, Automotive Content Experience
Mercedes-Benz Marco Polo
Three different variants of the Marco Polo are available, ranging from adventure themed to most luxurious. With the top lowered, the Marco Polo looks and drives like a typical van, but inside are proper living quarters. Raise the roof and not only is there sleeping space above, it also creates a taller ceiling for a more comfortable space. With seating and sleeping space for four, the Marco Polo comes complete with stove, sink, refrigerator and a folding table. Front seats pivot to face the rear, creating a comfortable, luxurious living space. 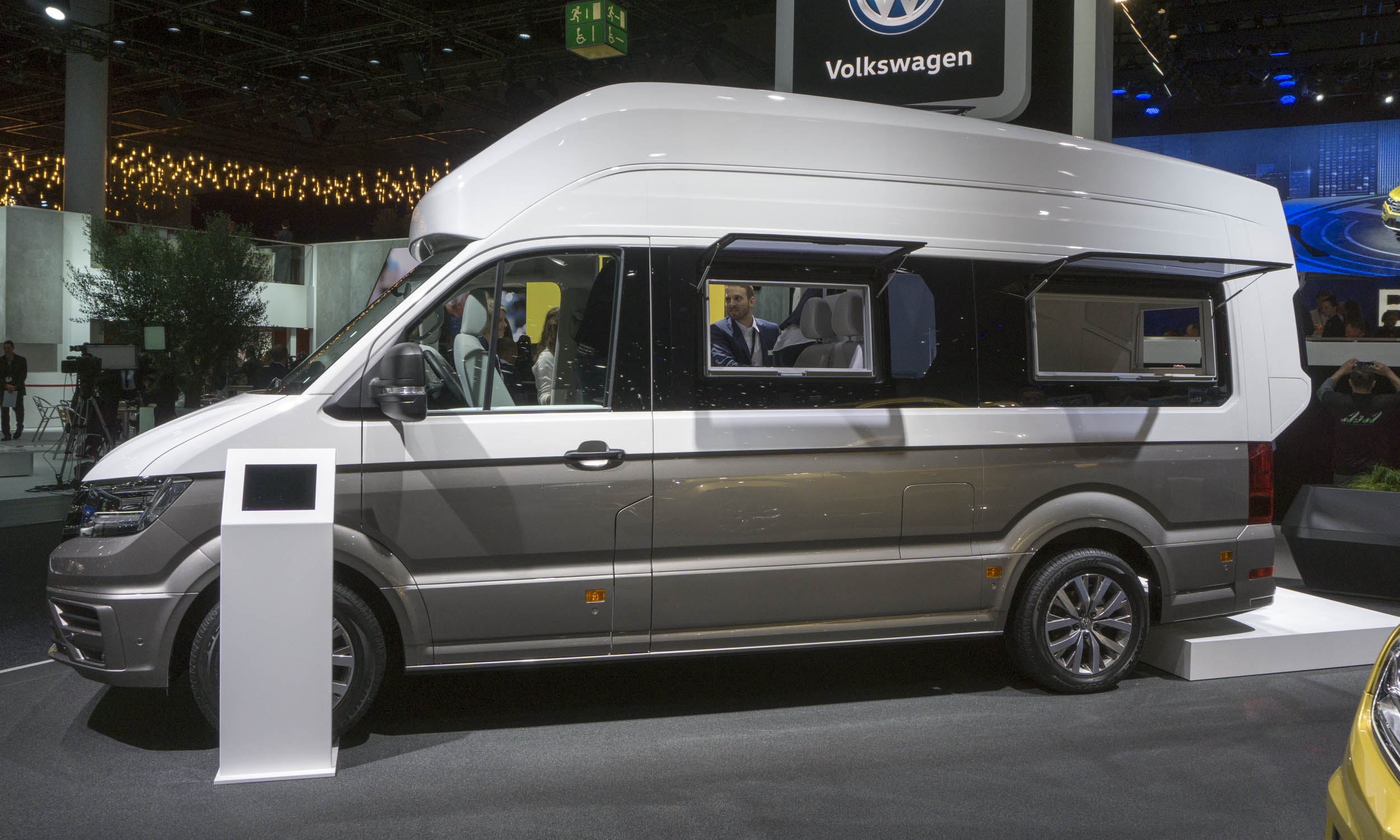 © Perry Stern, Automotive Content Experience
Volkswagen California XXL
Volkswagen may not sell a camper van in America anymore, but the company still makes one – ironically named after an American state. The California features a pop-up top with sleeping for four, but Volkswagen took this camper to the extreme and created the California XXL concept. Based on the Volkswagen Crafter — the brand’s largest commercial van — the California XXL is a modern and massive take on the classic camper van. For added convenience, the big camper concept is equipped with full-time all-wheel drive as well as a fuel-efficient turbodiesel engine. 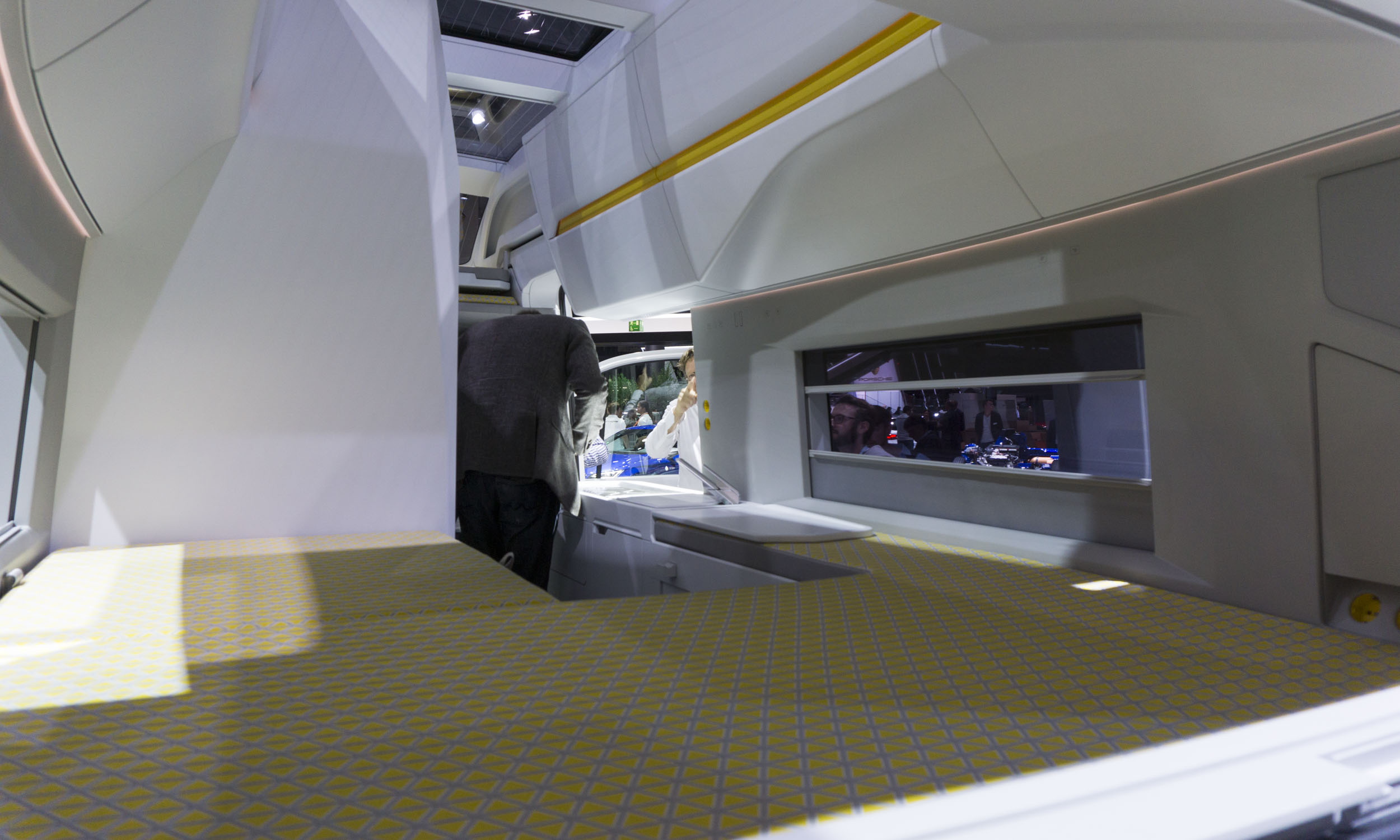 © Perry Stern, Automotive Content Experience
Volkswagen California XXL
Measuring almost 20 feet long, the California XXL has a fixed roof rather than a popup, but with more than seven feet of standing height, the popup really isn’t necessary. The interior is bright thanks to a panoramic roof with light strips as well as bright white cabinets. Features are too numerous to list, but highlights include a heated and cooled full-size bed, an extendable work surface, underfloor heating, and a retractable wet room with shower and toilet. An alcove above the front seats provides additional sleeping space, and with the panoramic roof and a forward-facing window, a great place to simply hang out. 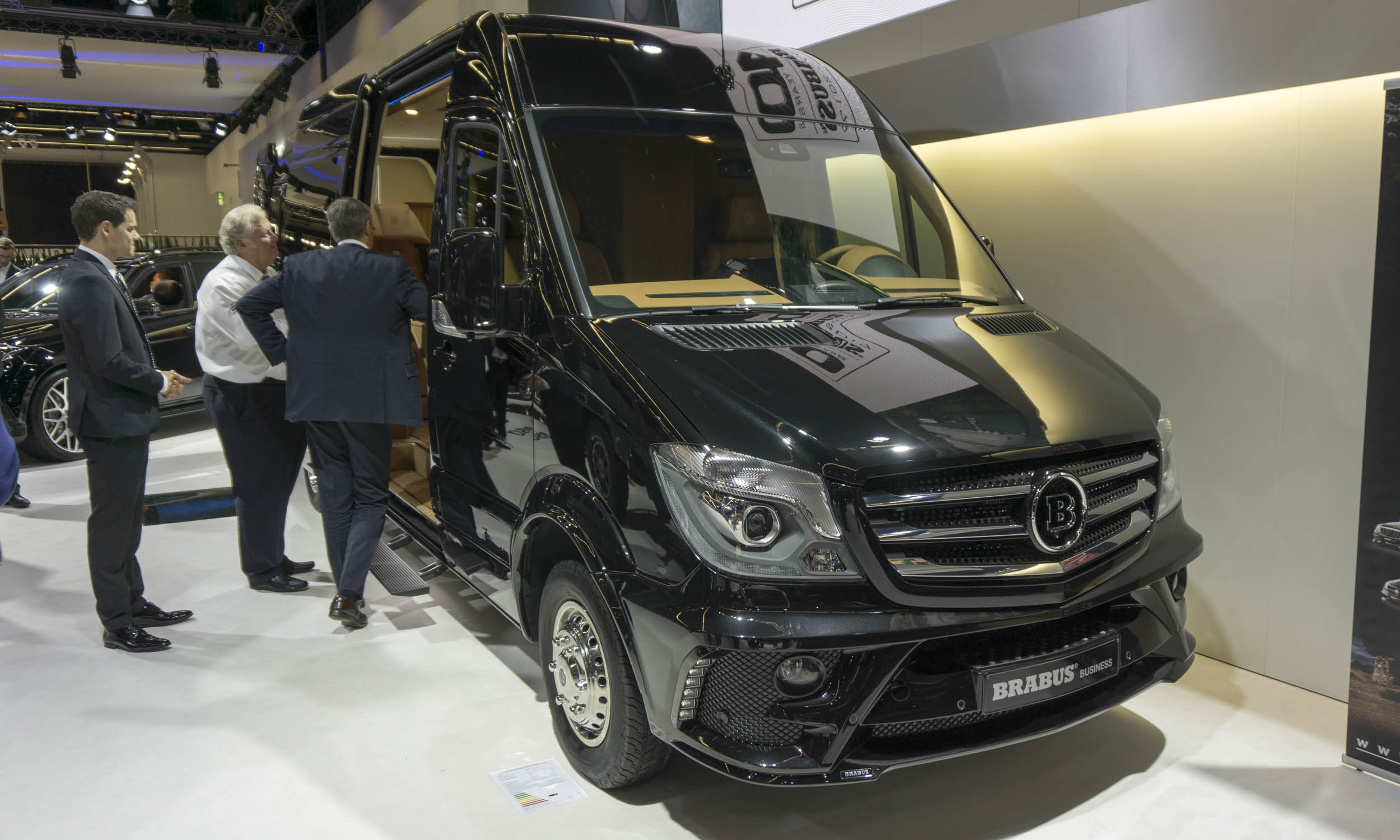 © Perry Stern, Automotive Content Experience
BRABUS VIP Business Lounge for Sprinter
Arriving in a limo may make a big impression; however, if you really want to ride in style, the BRABUS VIP Business Lounge is the way to go. Built on the full-size Mercedes-Benz Sprinter van, the business lounge was created by BRABUS, a German customization company that has been designing and creating exclusive interiors since the late 1970s. The big van is somewhat stealthy from the outside, differentiating itself from a standard van with a new front bumper design tweaks, LED running lights, special wheel covers and a retractable step for easy access through the large sliding side door. 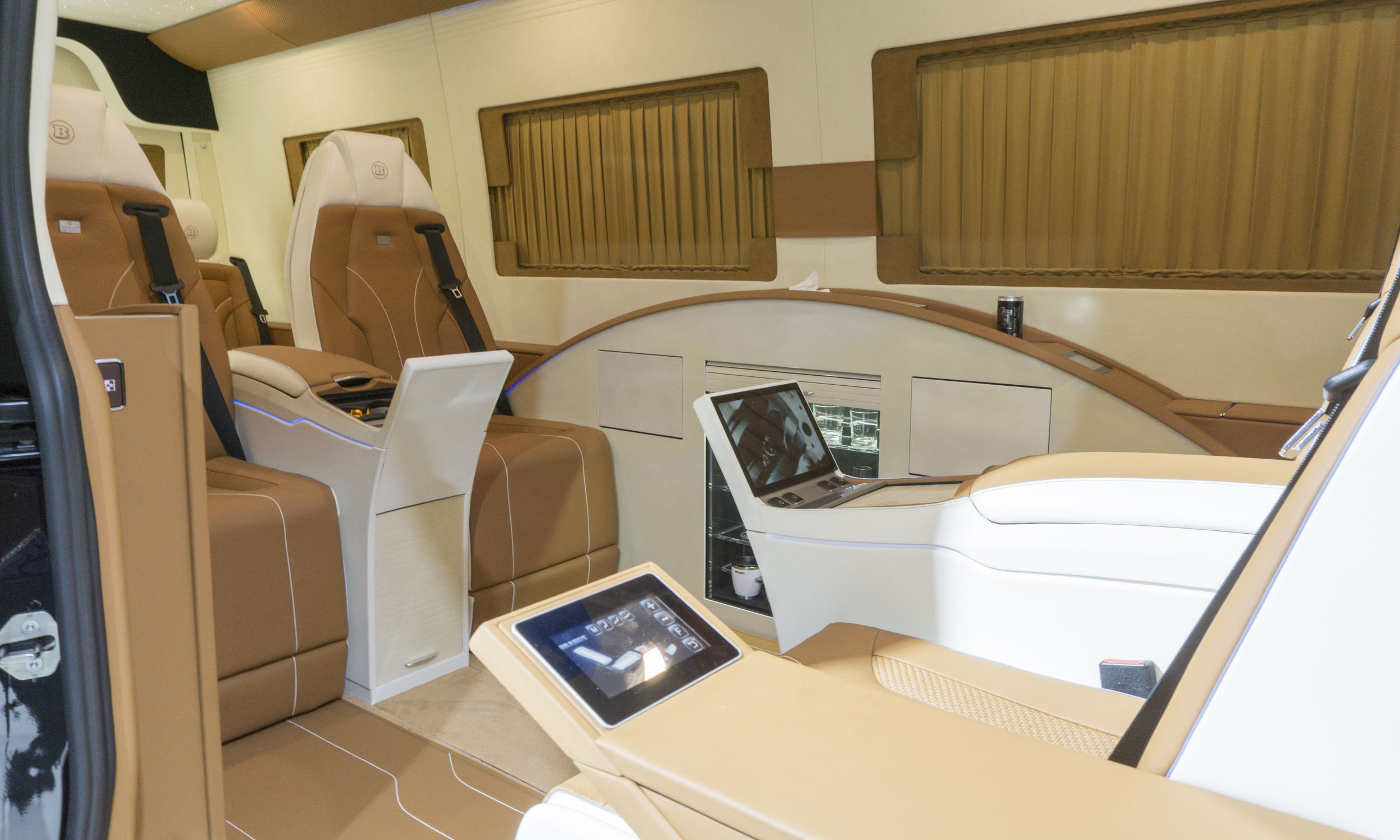 © Perry Stern, Automotive Content Experience
BRABUS VIP Business Lounge for Sprinter
The interior of the VIP Business Lounge is akin to a private jet. Six plush leather seats recline with integrated foot rests. Dark-tinted windows and power-operated curtains on the side and rear windows ensure privacy. Comfort features include a refrigerator and a coffee machine— both housed in a center console between the business seats. With eight USB ports and three standard power outlets located within easy reach of the seats, powering everyone’s devices is not a problem. Six dimmable reading lights provide perfect lighting for reading at all seats. A 42-inch HD LCD multimedia screen mounted on the wall behind the driver can stream from any device via the onboard high-speed internet. The rear-facing seats have an integrated 10-inch display screen so nobody misses the show. 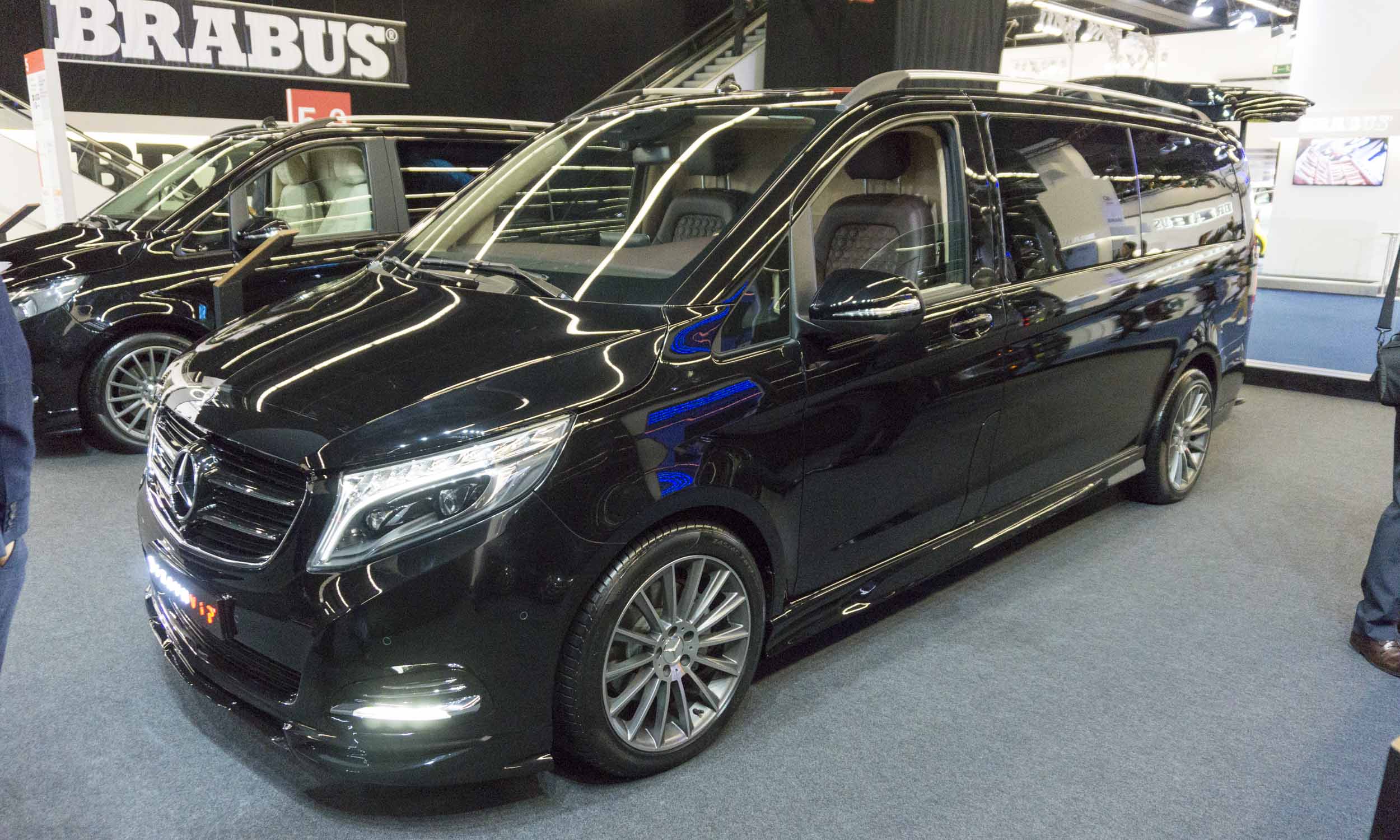 © Perry Stern, Automotive Content Experience
Dizayn VIP DV Ross
For those seeking the ultimate luxury ride, there’s the Dizayn VIP DV Ross. Based in Istanbul, Turkey, Dizayn VIP exports its specially-built vehicles throughout Europe. Dizayn VIP featured a number of custom vans at the Frankfurt Motor Show, but this one looked like a vehicle properly set up for a fun-filled road trip — with a designated driver. The DV Ross is built on a Mercedes-Benz V-Class van platform — a much more manageable size than the larger Sprinter van. 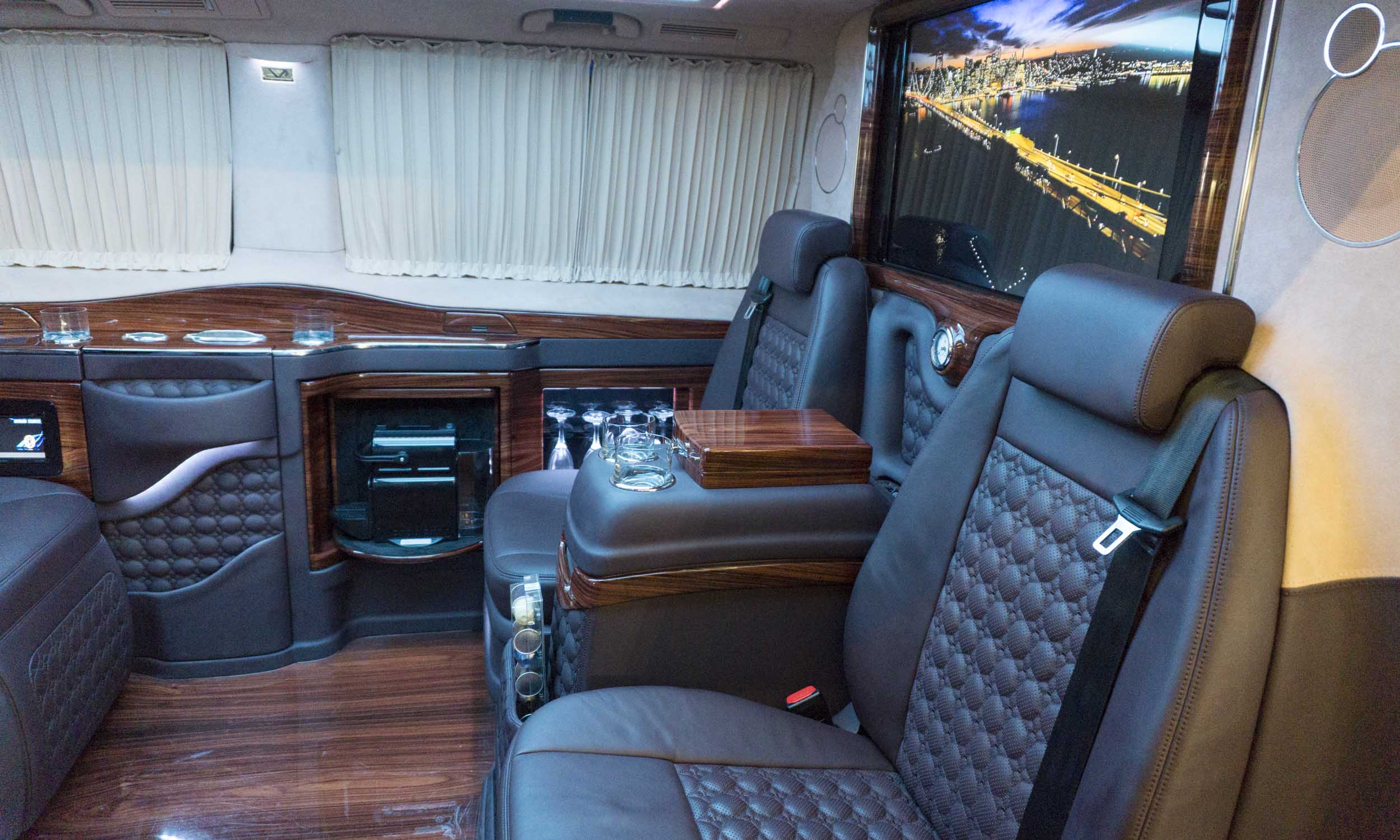 © Perry Stern, Automotive Content Experience
Dizayn VIP DV Ross
The interior of the DV Ross is quite lavish, featuring what the company calls Mercedes-Benz S-Class seats. Leather-trimmed seats are heated, cooled and have multiple massaging functions. Mahogany is used throughout, including the floor. Other features include laptop tables, a safe with fingerprint lock, a 32-inch LED TV, a refrigerator, an espresso machine, an Alpine audio and DVD system, multiple power outlets and a Sony PlayStation.