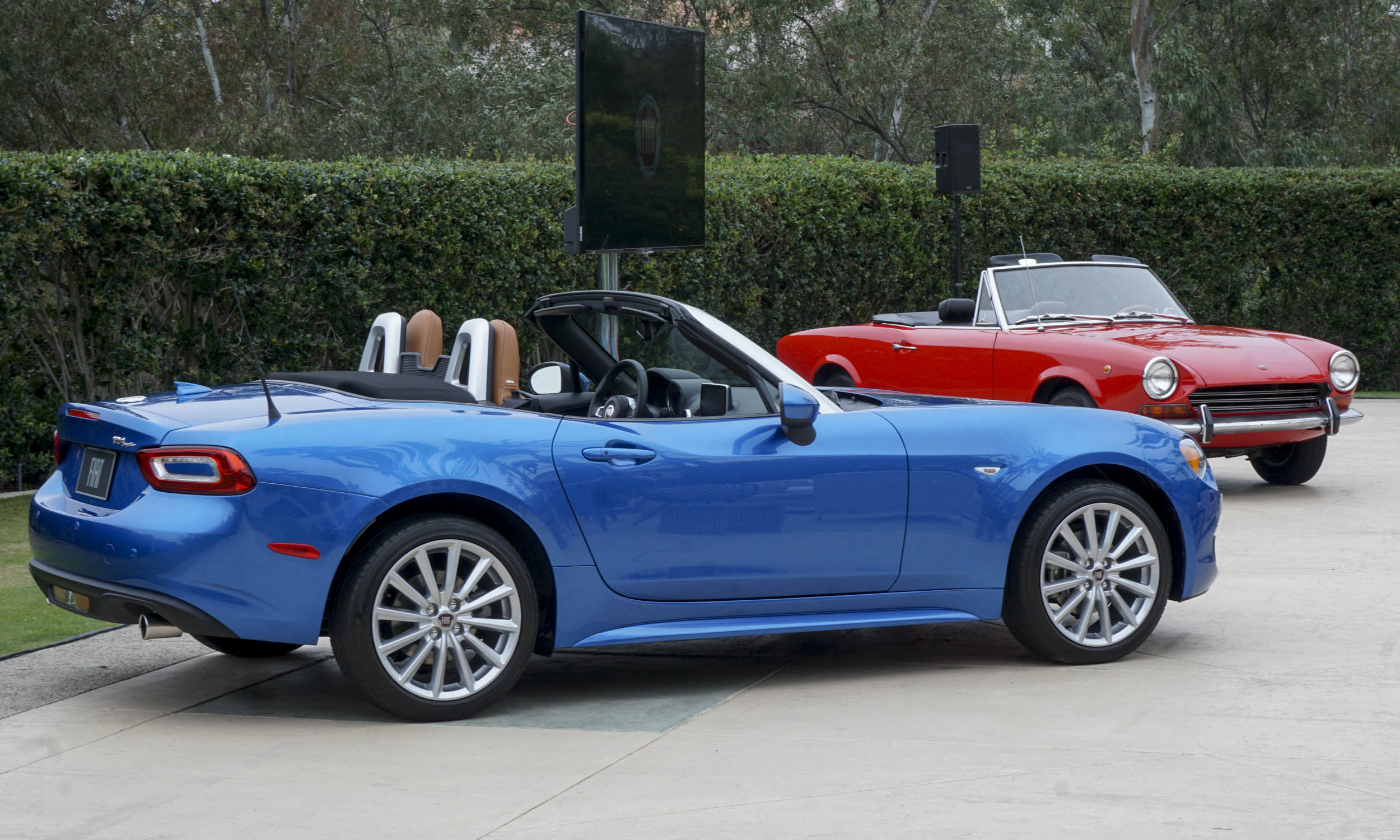 Spider Reboot
It’s been several decades since Fiat sold a 2-seat roadster in America — the last one was the Fiat 124 Spider. Hey, look at what they’re calling the new one — the Fiat 124 Spider! Designed to honor its namesake, the new 124 Spider carries on the traditional long hood, short overhangs and, of course, rear-wheel drive of the original 124. Many of the reviews you may read about this vehicle will immediately point out that this Italian car is based heavily on the all-new Mazda MX-5. Although this is true, we are going to ignore that fact for the moment and look at the 124 Spider for what it is, not what it is compared to the MX-5. 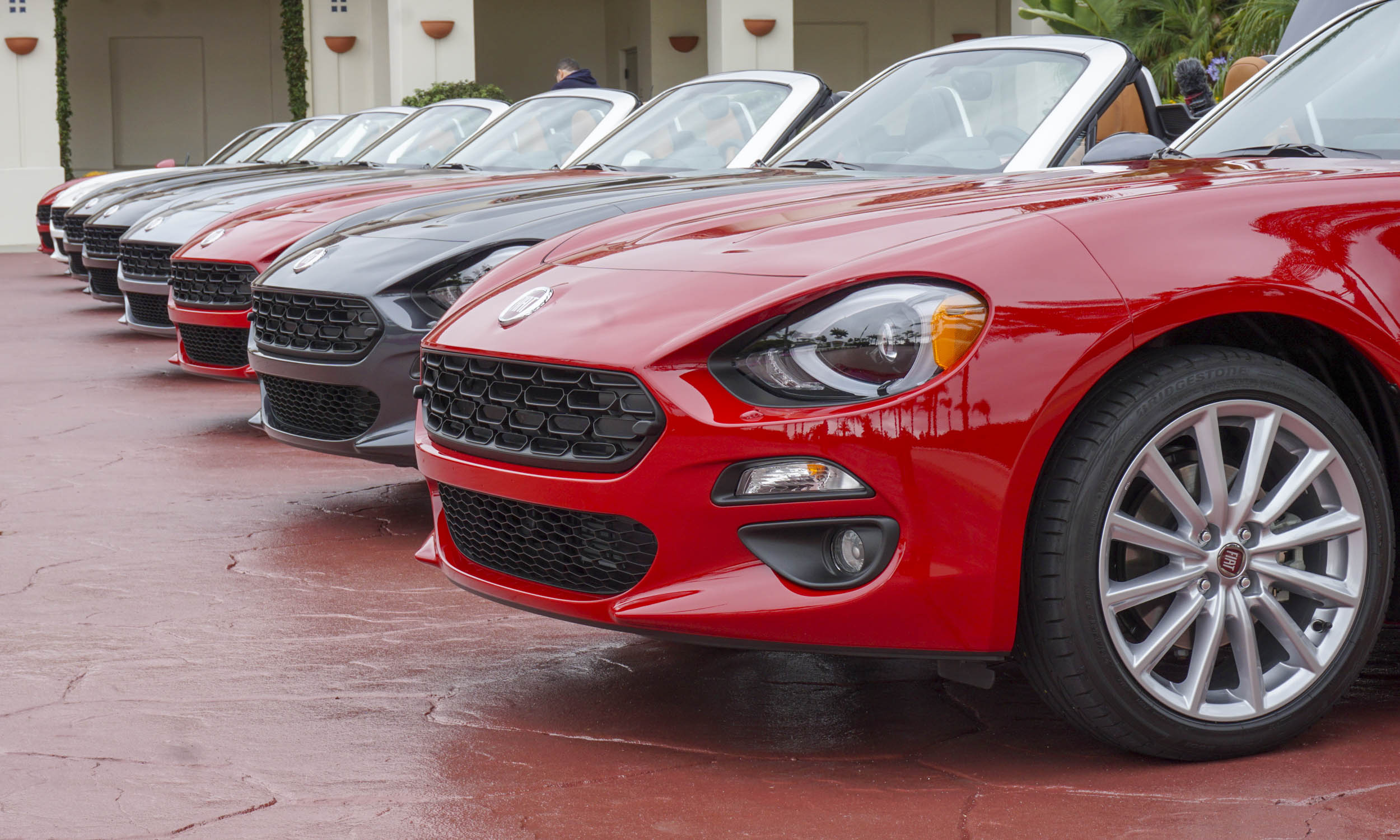 Model Lineup
The Fiat 124 Spider is available in three different trim levels: Classica, Lusso and Abarth. Classica is the base-level trim, Lusso is the more luxurious version, and Abarth is designed for the enthusiast. A limited edition Prima Edizione Lusso will also be available at the beginning of production. 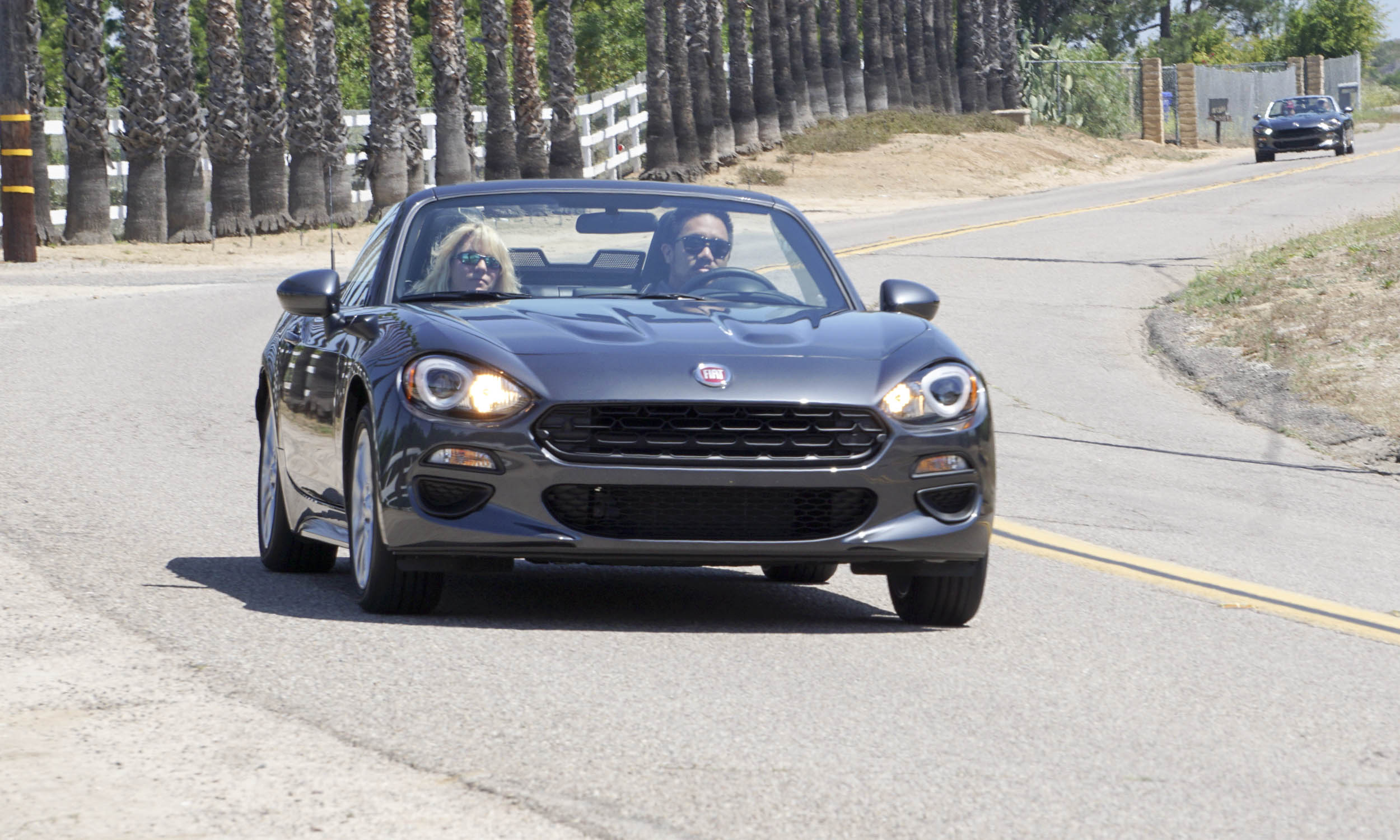 Classica
The Classica is the entry-level trim of the Fiat 124 Spider with a base price of $24,995. Even with a price starting below $25K —not bad for a 2-seat roadster — you still get air conditioning, premium cloth seats, an AM/FM audio system with Bluetooth, dual-tip exhaust, remote keyless entry, projector-beam headlamps, LED taillights and 16-inch aluminum wheels. 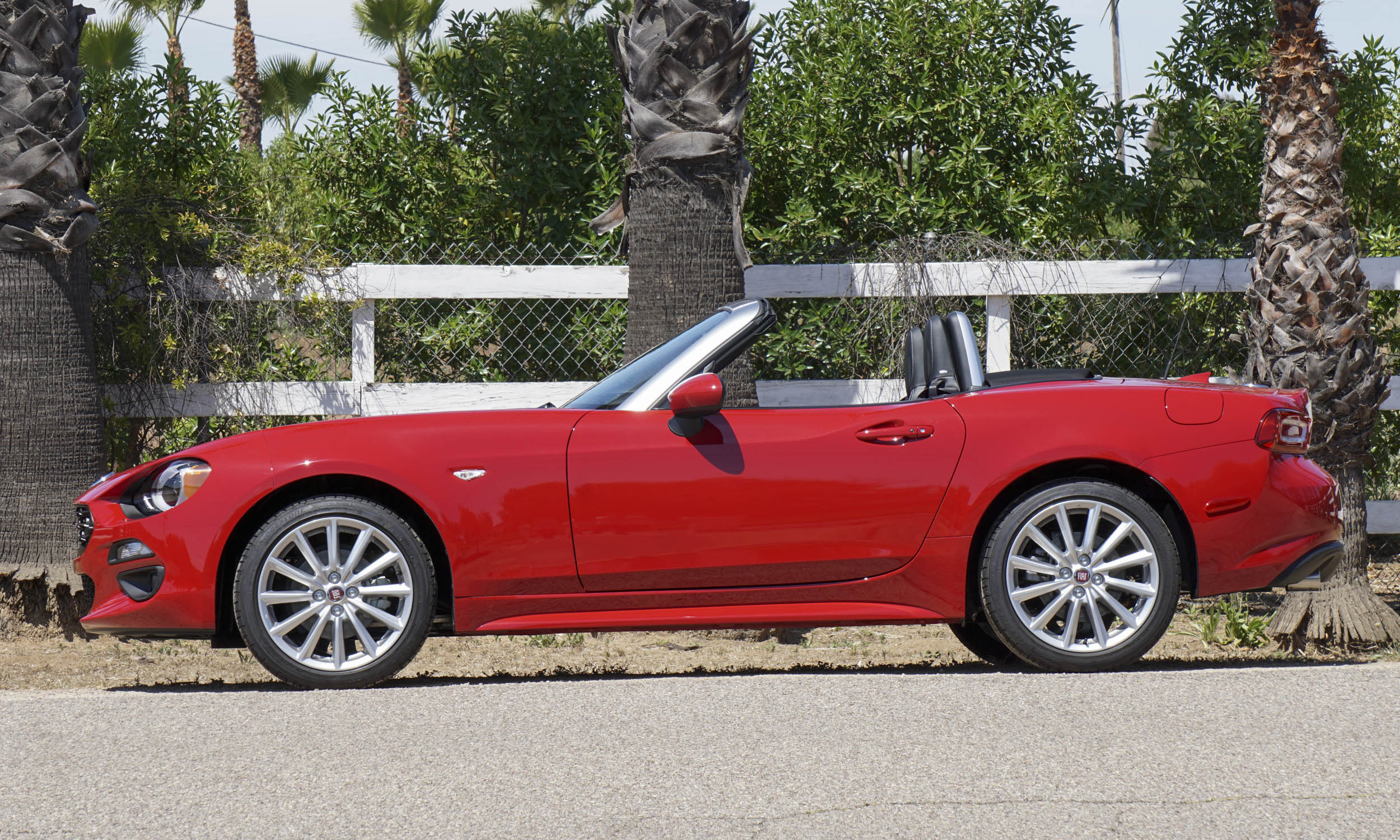 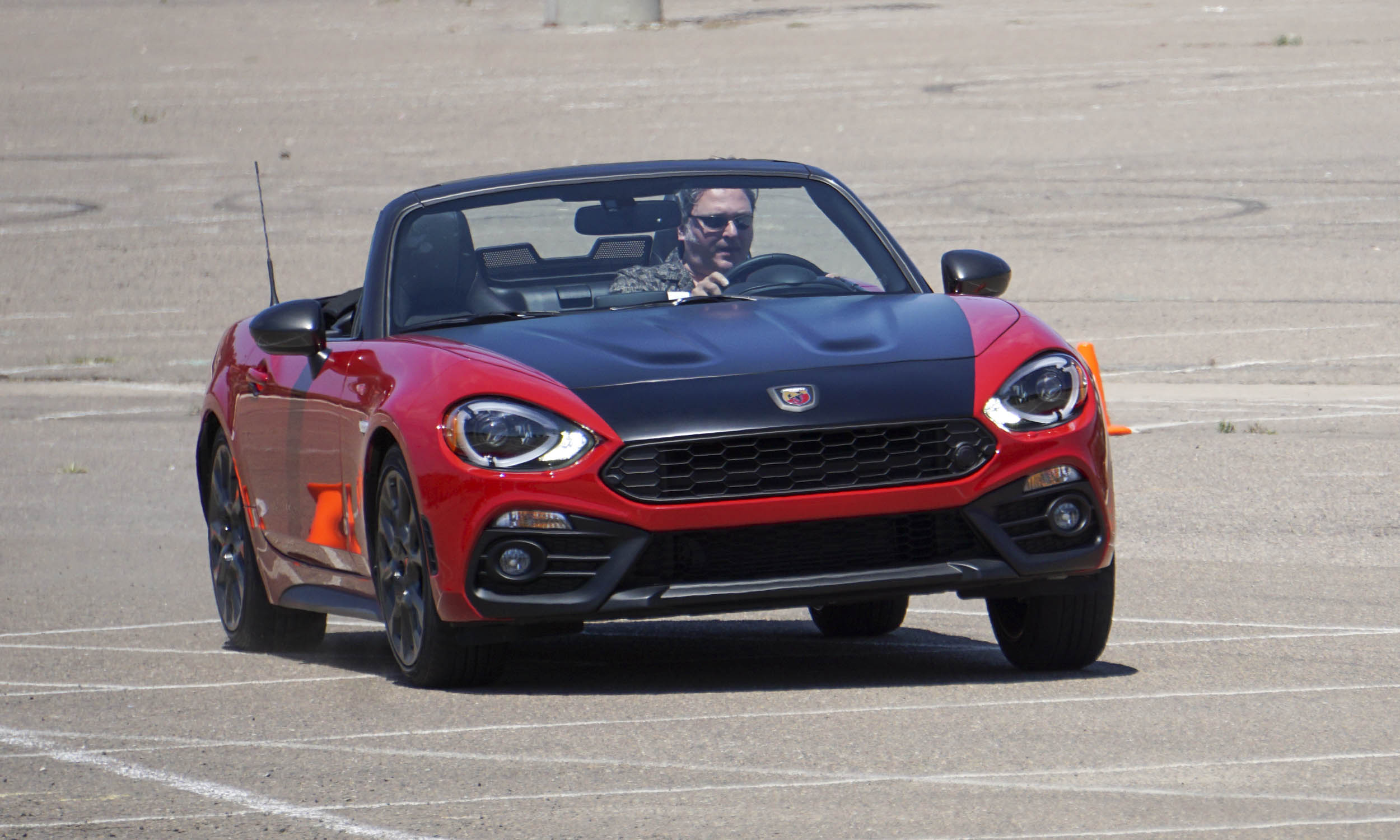 Abarth
For those desiring the sportiest of the 124 Spiders, look no further than the Abarth. This top-level trim is priced at $28,195 and upgrades over the Lusso include a sport instrument cluster, matte gray trim, leather-trimmed sport seats, a sport steering wheel, performance-tuned suspension, a limited-slip differential, body-color sport fascias, a gunmetal roll bar, quad exhaust outlets and 17-inch gunmetal aluminum wheels. Abarth also gets a slight power upgrade over the other two trims. 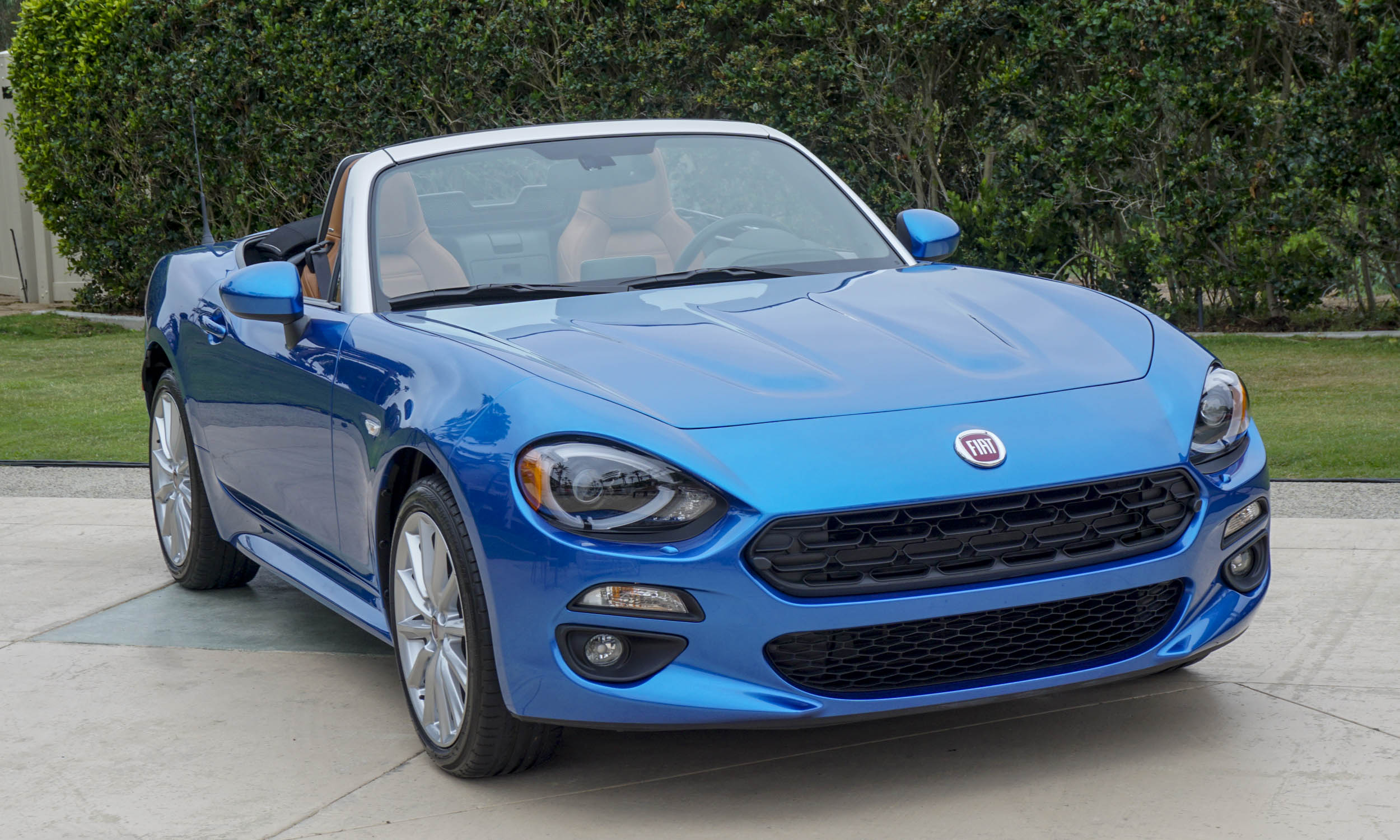 Prima Edizione Lusso
For those first in line, Fiat is selling a mere 124 special Prima Edizione versions to commemorate the classic roadster’s return to the U.S. With a price of $35,000, these limited-edition Fiats will be individually numbered with a commemorative plaque and will have exclusive Azzurro Italia Blue and Saddle premium leather seats. Owners also receive limited-edition collectibles, including a matching blue leather bag, a journal with a pen, and a poster showcasing an original design illustration with vehicle dimensions. 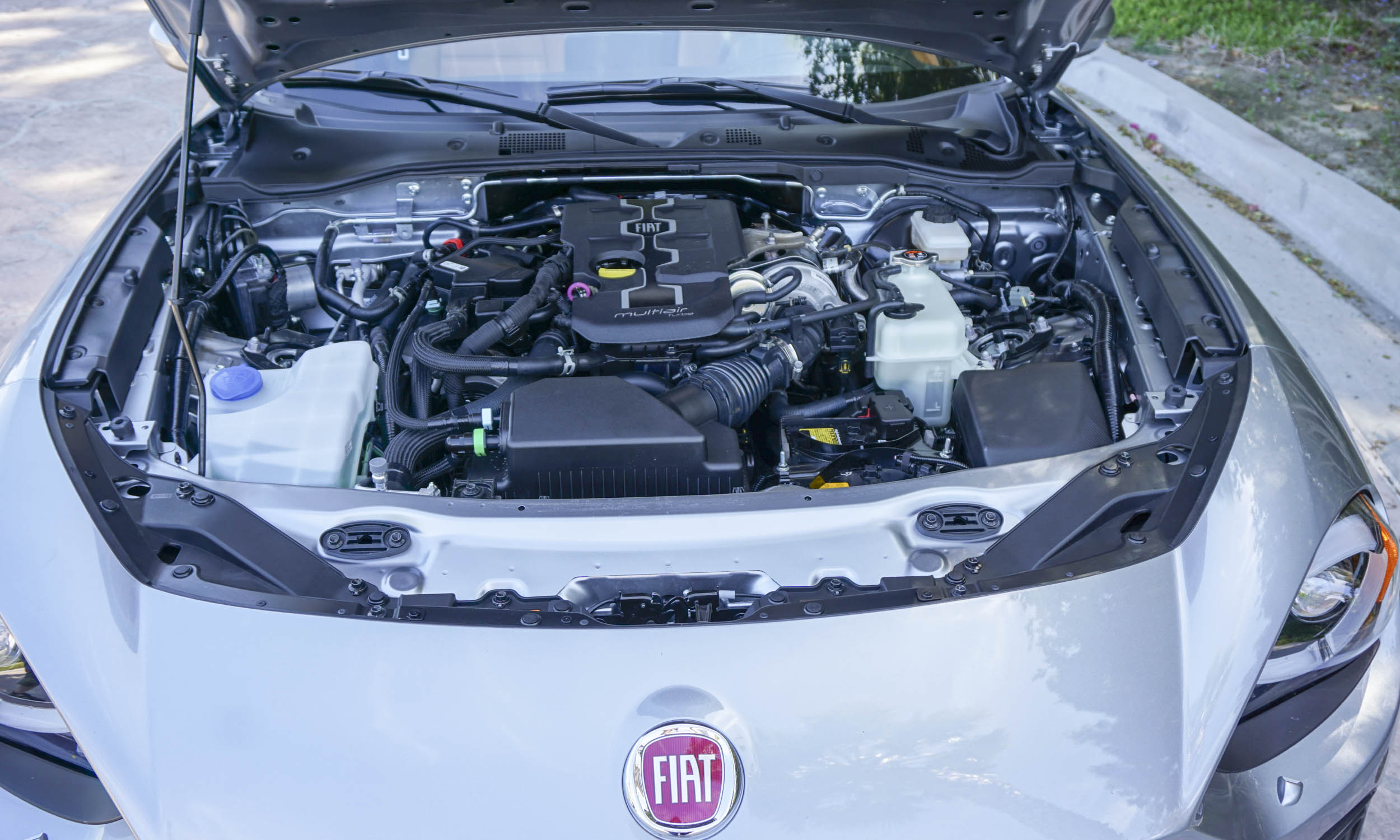 Under the Hood
The Fiat 124 Spider is powered by the Italian-built 1.4-liter turbocharged 4-cylinder engine making 160 horsepower and 184 lb-ft of torque at 2500 rpm. We expected the Abarth would get a more powerful option, but it is equipped with the same 1.4-liter powerplant — although it does get 4 (yes, four) additional horsepower. 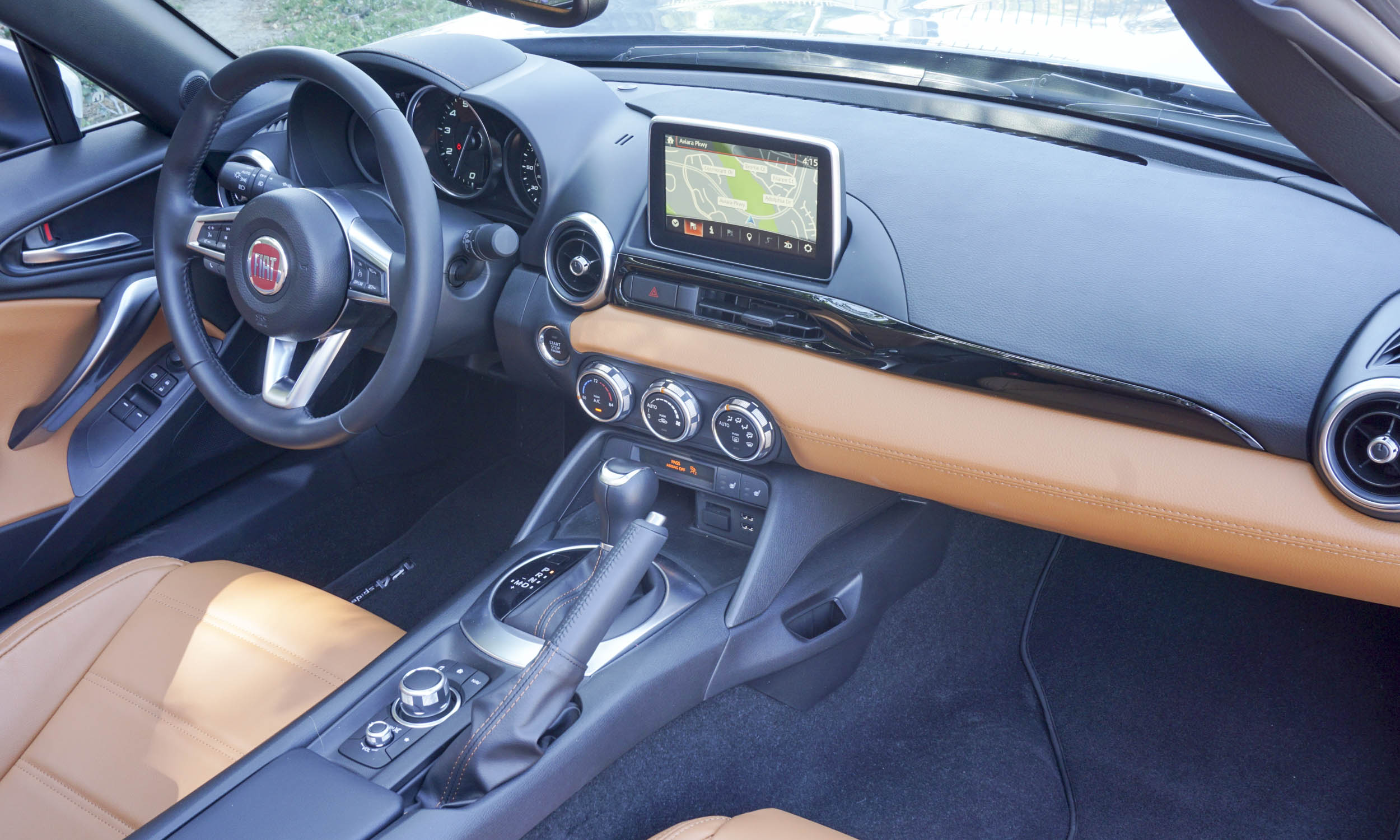 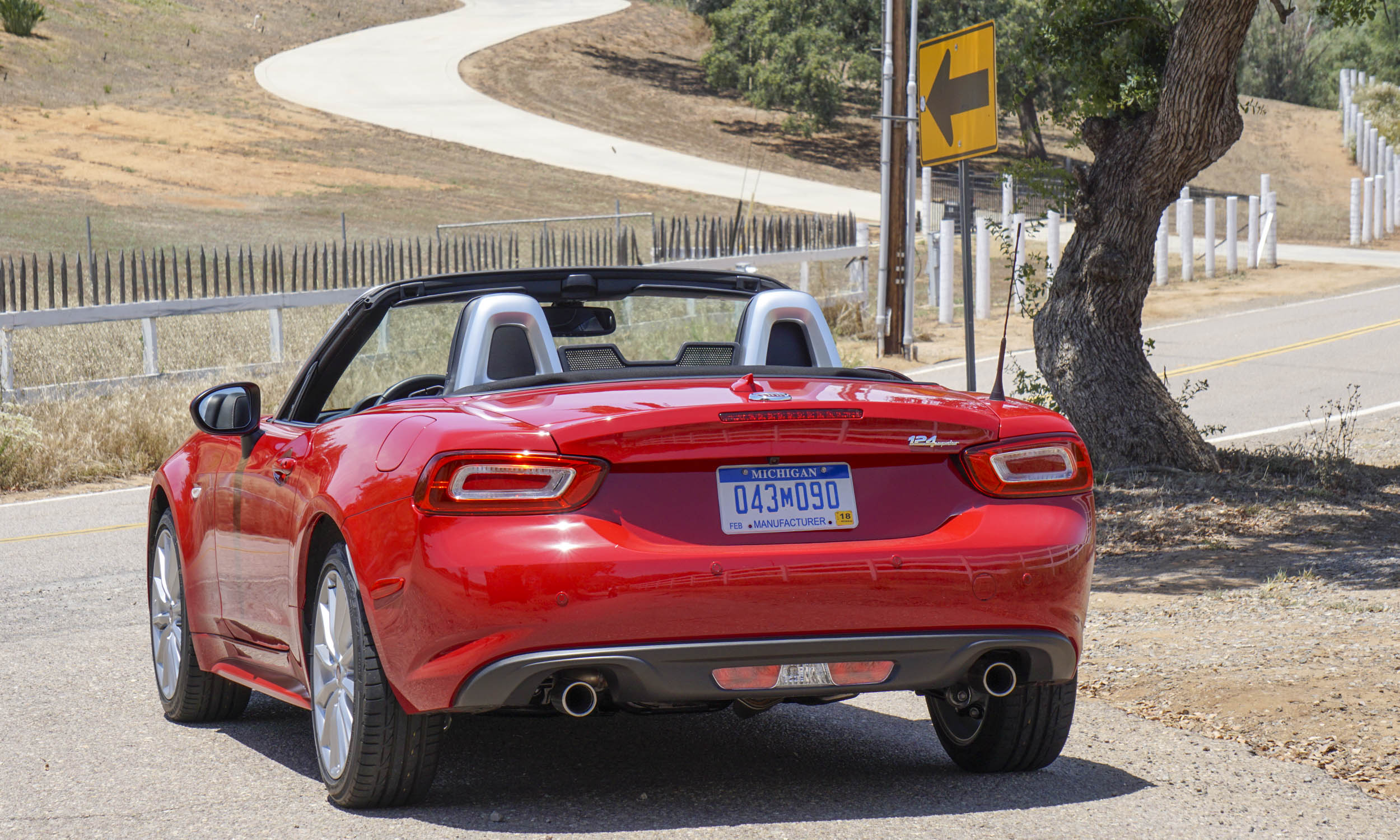 Fuel Economy
Unlike many newer models, the manual transmission on the 124 Spider actually provides improved fuel economy — at least in the city. Models equipped with the manual are rated at 26 city / 35 hwy / 30 combined. The automatic transmission knocks city mpg down by one, hwy mpg up by one with a combined rating of 29 mpg. 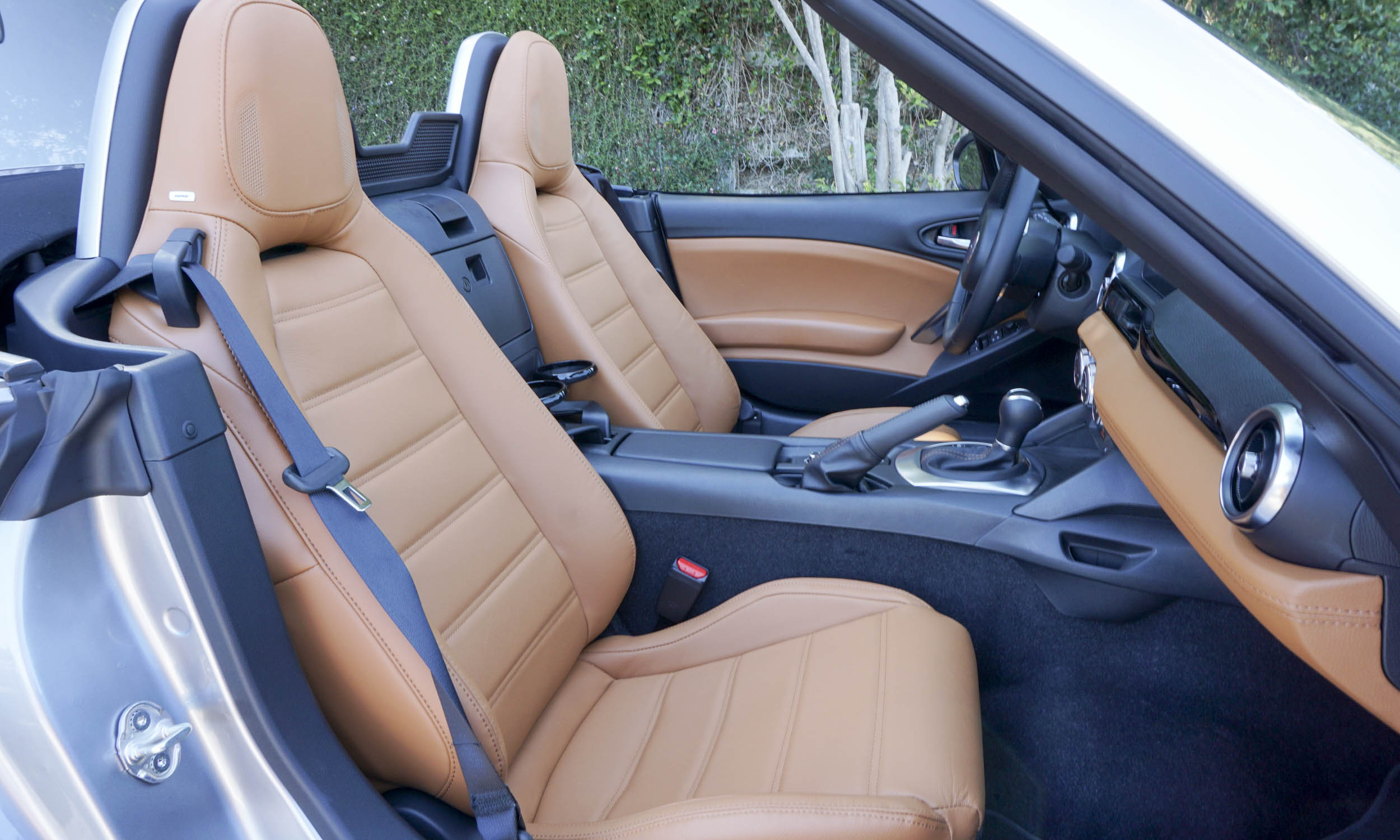 Inner Space
We had a chance to spend time in all three versions of the 124 Spider. Seats are comfortable in all three, but if you leave the top open on a hot sunny day you’ll prefer the basic cloth seats in the Classica, since the leather-swathed buckets can get quite toasty. The sport seats in the Abarth offer nice support and look good. Sure, this is a small roadster, but the legroom is a bit skimpy for the passenger, even with the seat back as far as it will go. 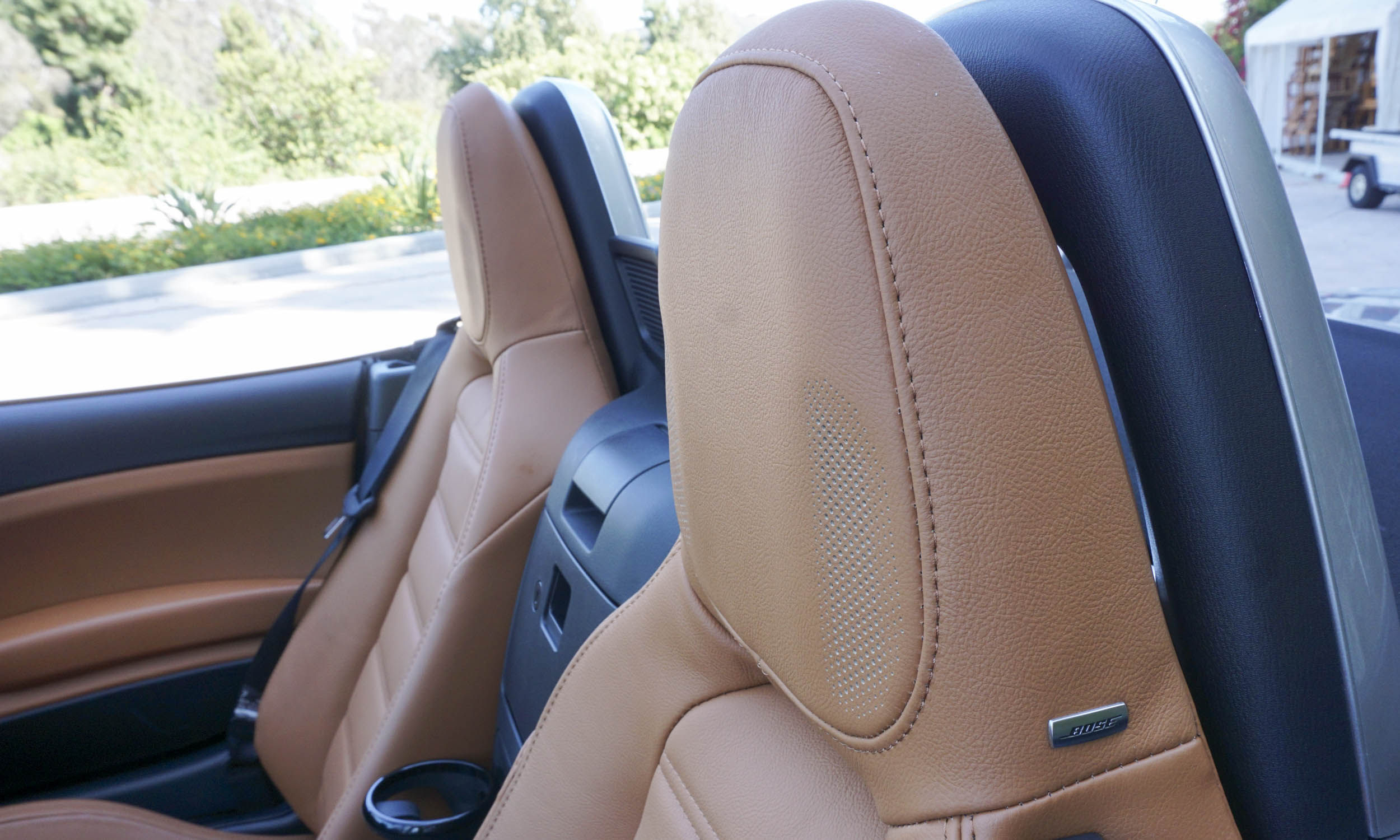 Storage
There’s not much storage space in the 124’s cabin. Not even a glove box in the typical location — just a small storage area behind and between the seats. Cupholders are also behind the seats and somewhat difficult to reach while driving. Testers hit them with their elbows on several occasions. That said, the trunk is surprisingly large for a car this size — it’s not cavernous by any means, but two small suitcases should fit. The downside is the lack of a spare tire — instead there’s a tire-inflation kit. 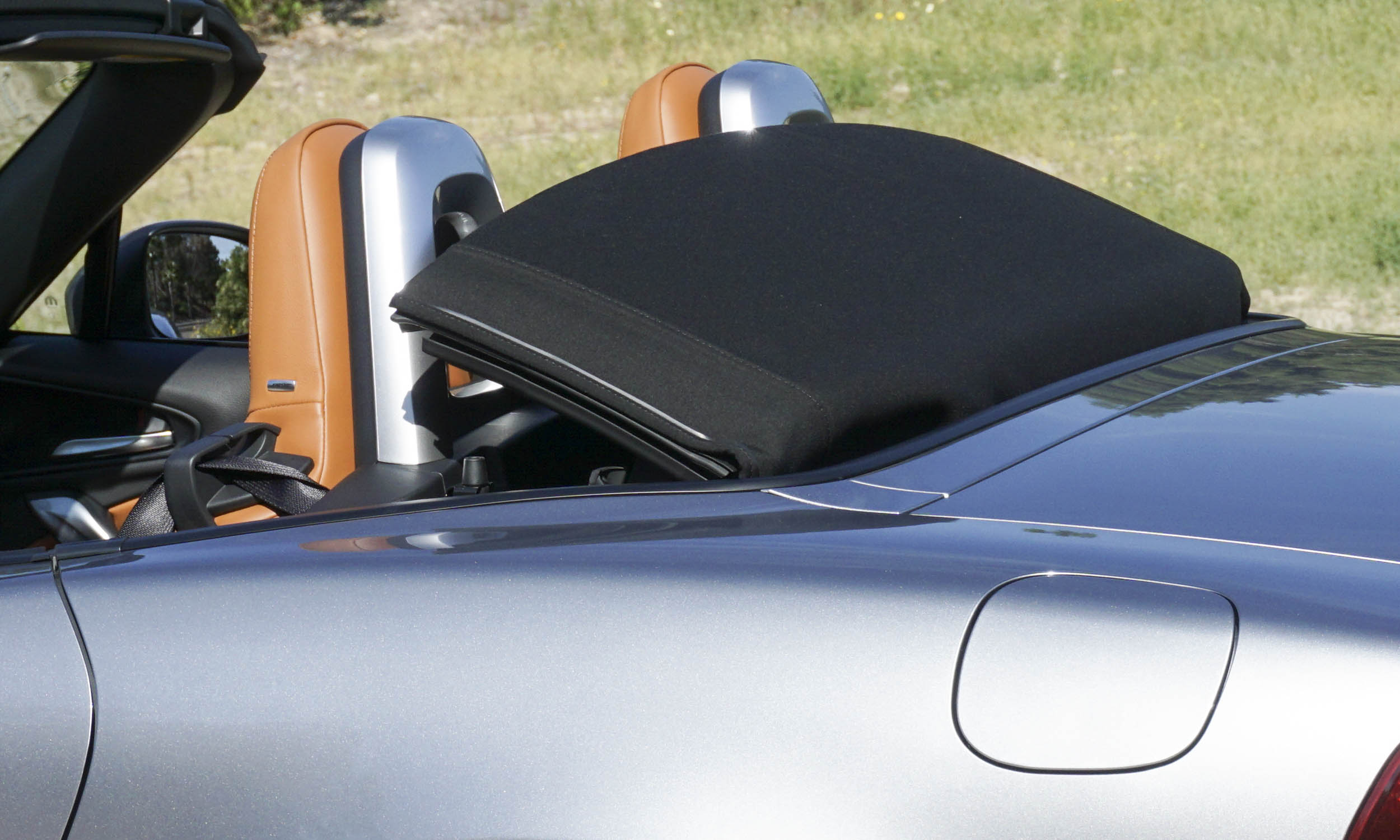 Top Operation
The manual convertible top is very easy to operate, even without getting out of the seats. To put the top down, simply release the latch above the rearview mirror, push the top back and it latches in place — the whole operation takes less than 5 seconds. To put the top up, release the latch between the seatbacks and the spring-loaded top pops up. Reach back and grab the top, pull it overhead and latch above the rearview mirror. In addition to being incredibly easy to operate, the top contributes to a rather quiet cabin. 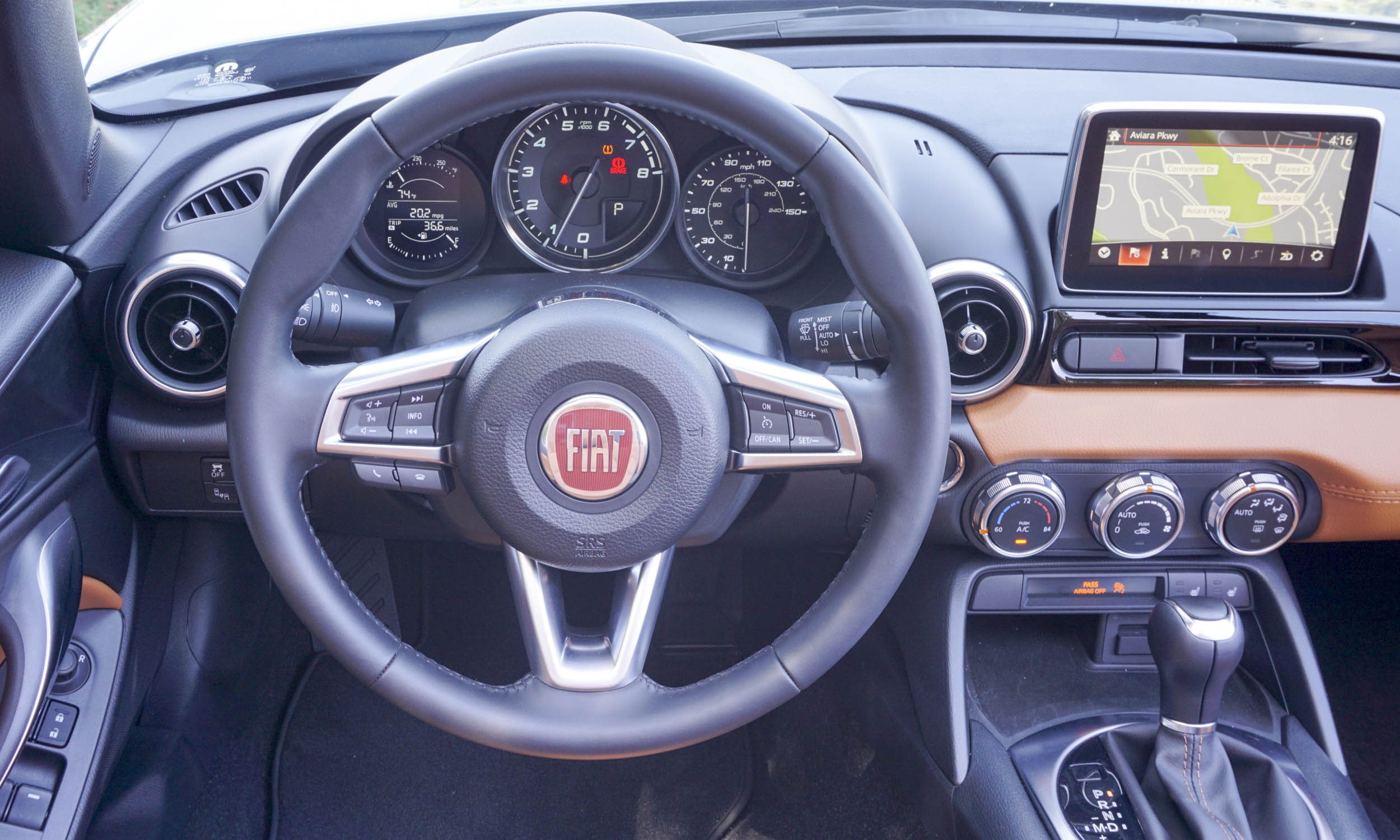 Interface
Although we really like the displays and touchscreen interface in most FCA vehicles, the Fiat utilizes Mazda’s interface, which isn’t quite as intuitive. There’s a selector dial in the center console to interact with the screen, and while it is not complicated to figure out, there seem to be too many steps to complete common tasks such as changing the radio station. 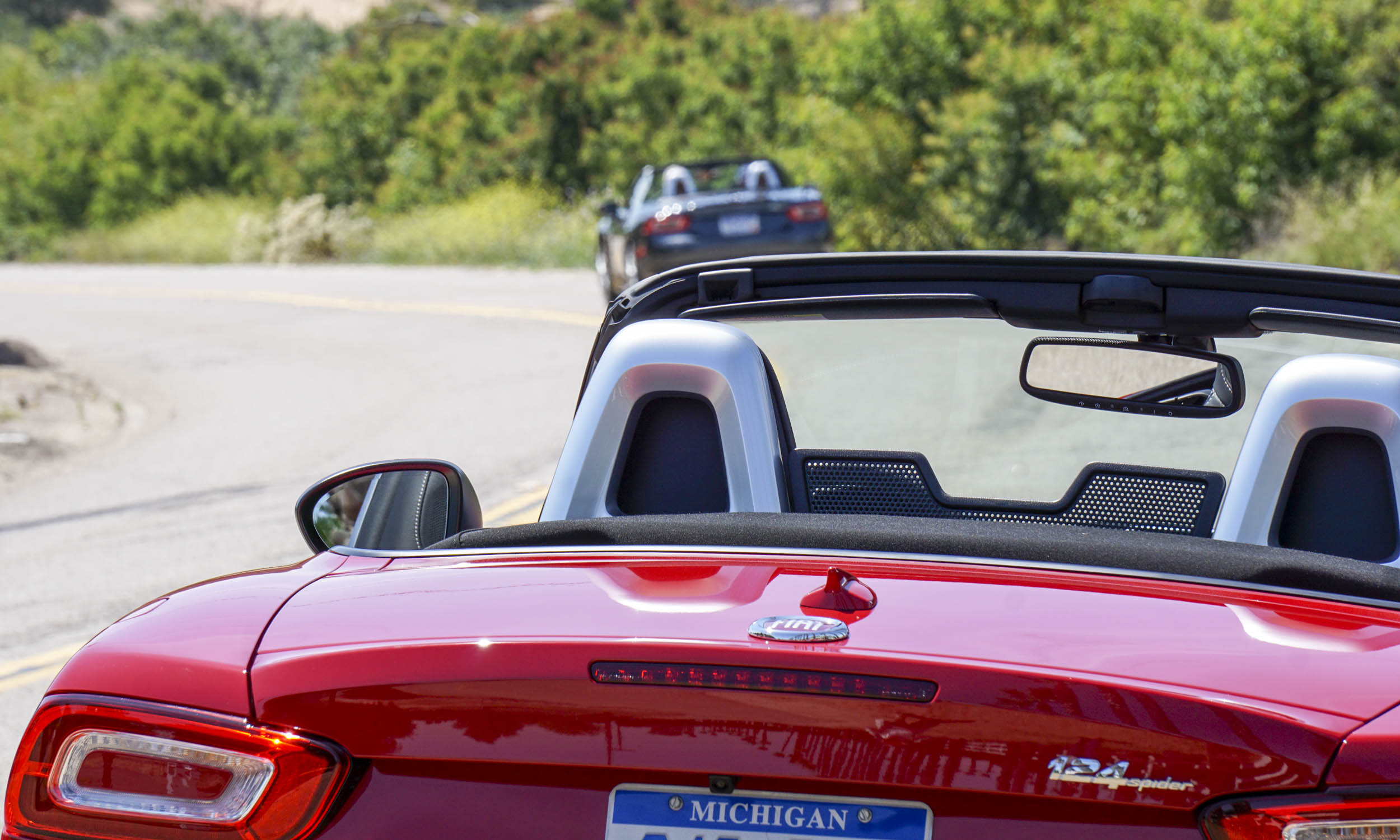 On the Road
For a driving enthusiast, it’s hard not to like a rear-wheel drive 2-seat roadster. The 124 Spider is balanced and agile, providing great fun on twisty roads. Steering is precise with proper feedback from the road. Thanks to an integrated windscreen behind the seats, wind noise and turbulence are kept to a minimum, even with the top down. That said, we weren’t big fans of the automatic transmission. When left to shift on its own, it seems to be geared more for fuel economy than performance — which is fine for some situations, but not all. The Abarth allows for easy shifting with the paddles and also features a sport mode that improves performance dramatically; unfortunately these assists are not available on the Classica or Lusso. 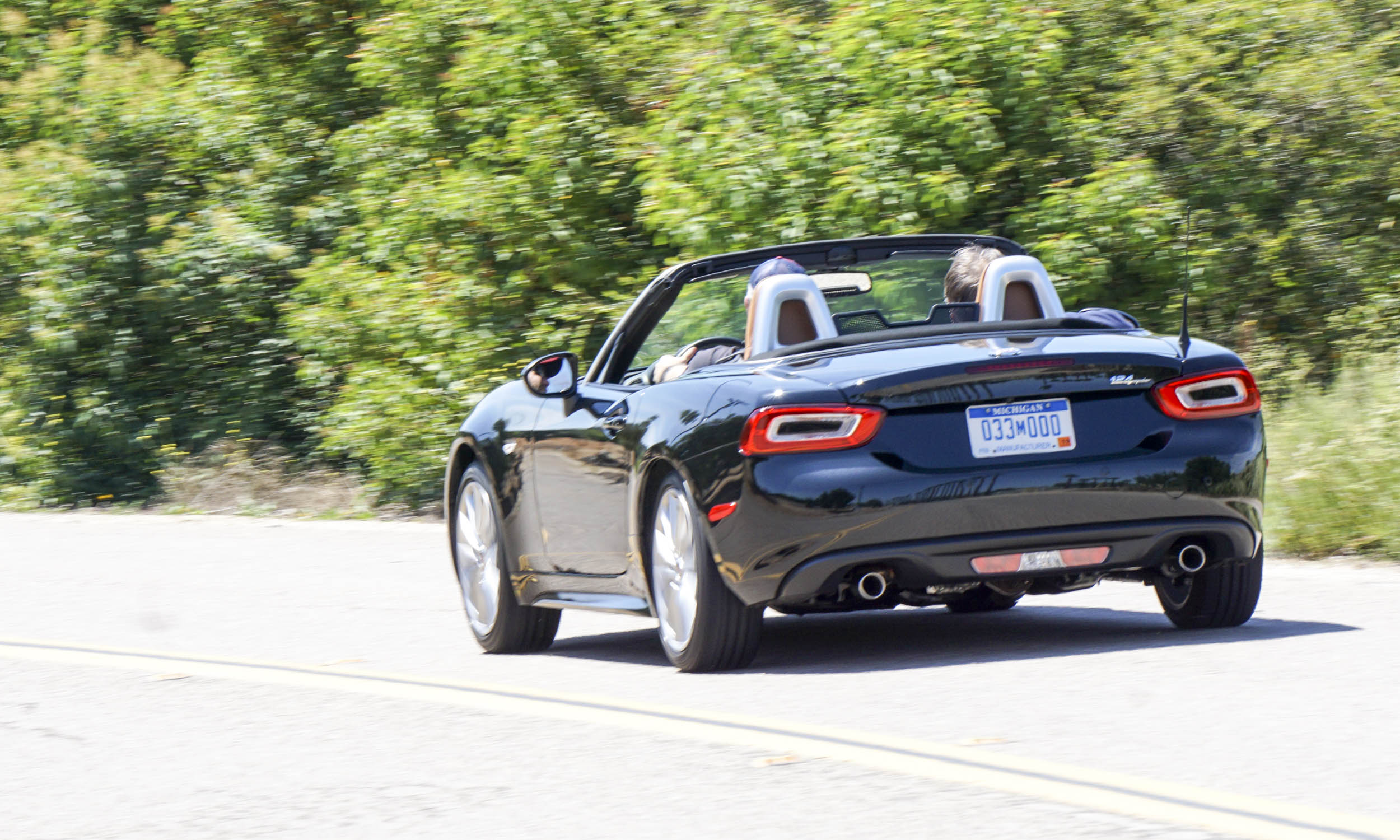 Turbo Lag
Keeping the engine around 3000 rpm — either with the manual transmission or manual mode of the automatic — delivers excellent performance with more than adequate power on tap. However, we had a few occasions when we tried to accelerate before the engine had spooled up and discovered a lengthy delay before we had any power. Admittedly, ”lengthy” is a relative term — it was just a few seconds, but seems longer when you’ve pulled in front of another car and can’t immediately move out of the way. 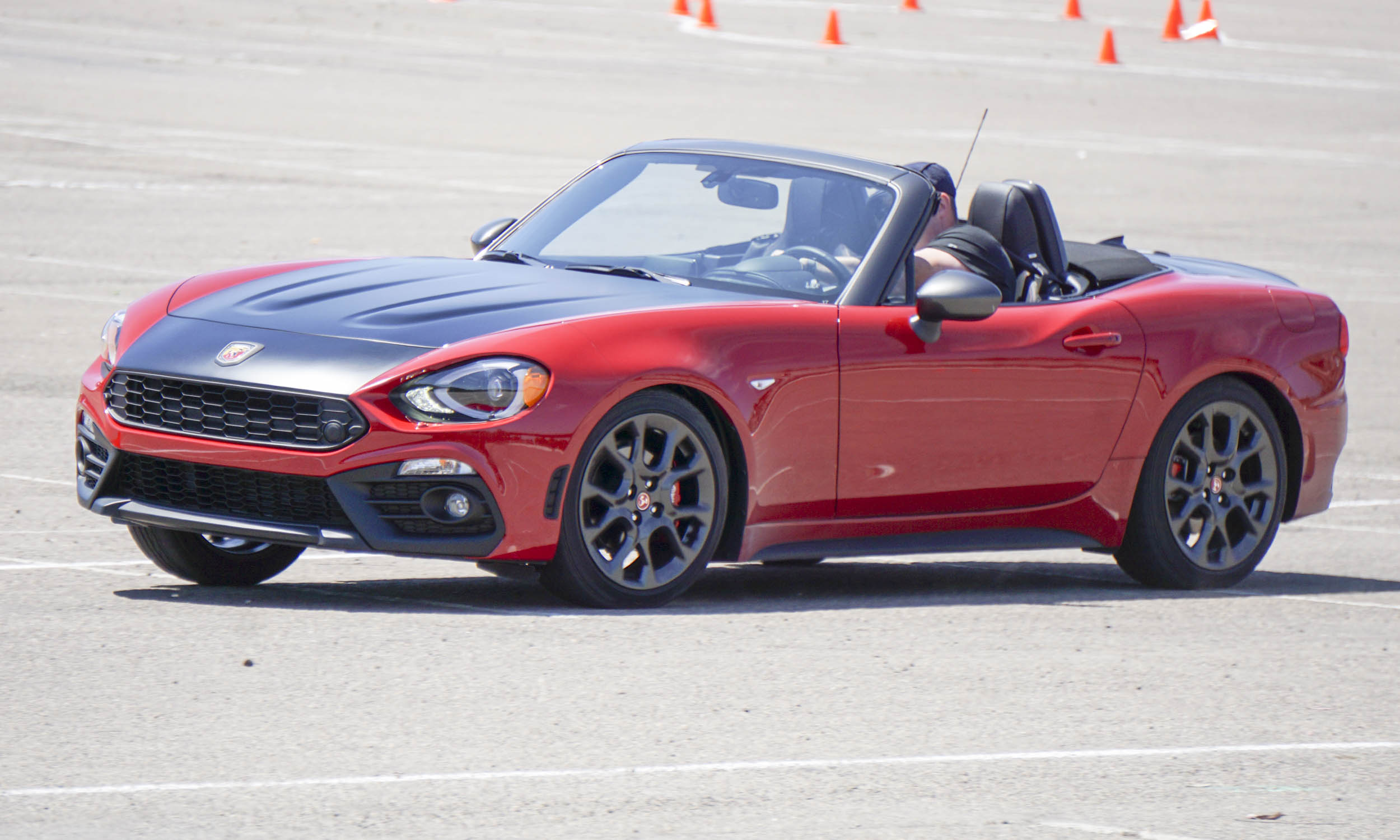 Abarth
We only drove the Abarth on an autocross course, so it’s hard to tell if that extra 4 horsepower really did anything for our performance — our guess is it did not. But the autocross course gave us the opportunity to really push this little roadster and we found it to be very enjoyable — easy to toss around yet quite controllable even when purposely sliding through corners. The pictures reveal a surprising amount of lean, although it wasn’t noticeable while driving. 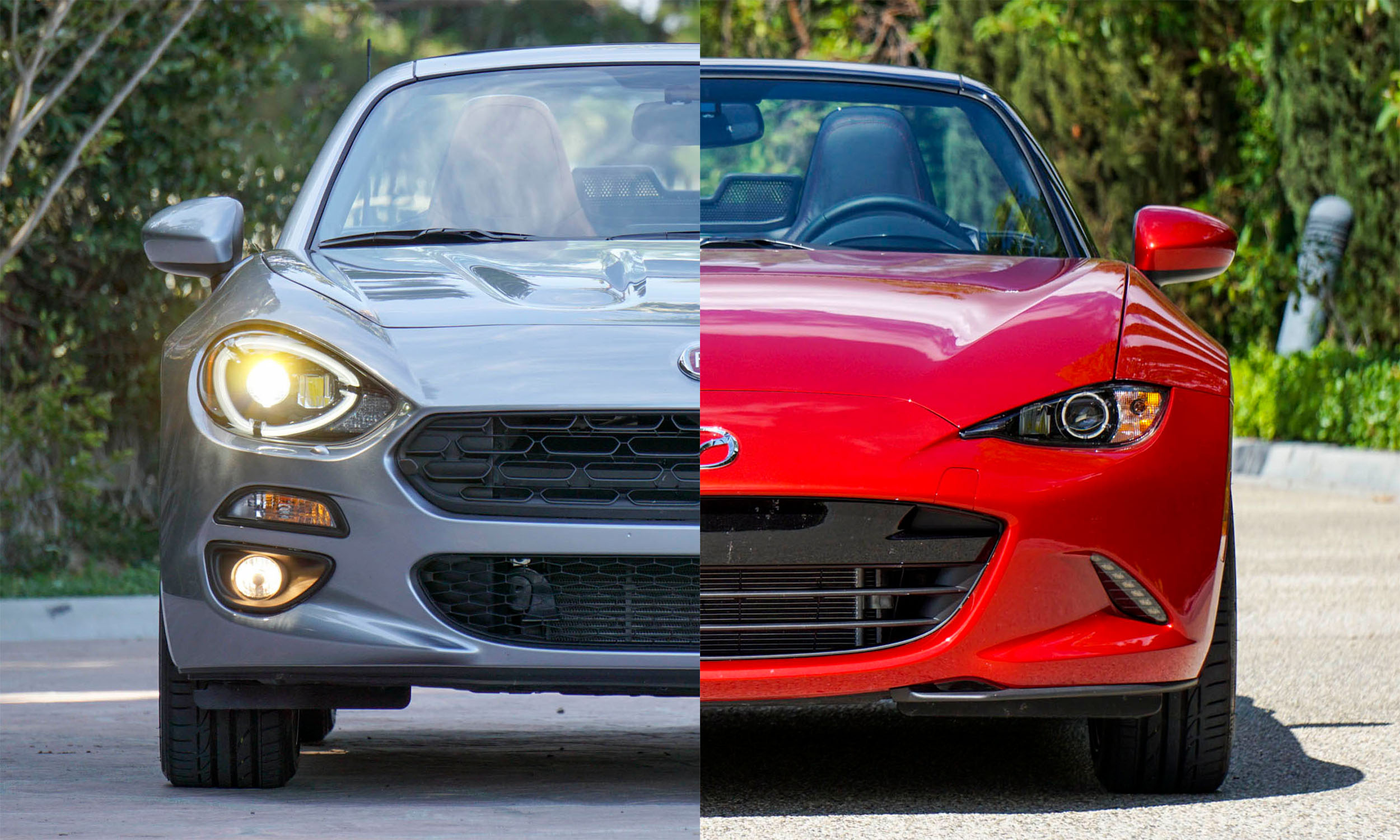 Versus Miata
Okay, we said we weren’t going to make this comparison, but ultimately there aren’t any other roadsters on the market for around $25,000 so there’s no question that the Fiat 124 Spider and Mazda MX-5 will be cross-shopped. The Fiat is indeed based heavily on the MX-5; however, the engines are different. The 124 has more power and once the revs are up it is probably quicker than the Miata. That said, the Miata feels lighter (it is by about 100 pounds) and quicker from a stop, and that lower weight makes it feel slightly more agile. And while the exterior design is all Fiat, aside from some different materials and seats, the interior is mostly Mazda. Both cars are fun to drive, and with starting prices pretty close to each other — the Mazda is about $800 less at its lowest price point — we believe most consumers are ultimately going to purchase based on personal preference and style. 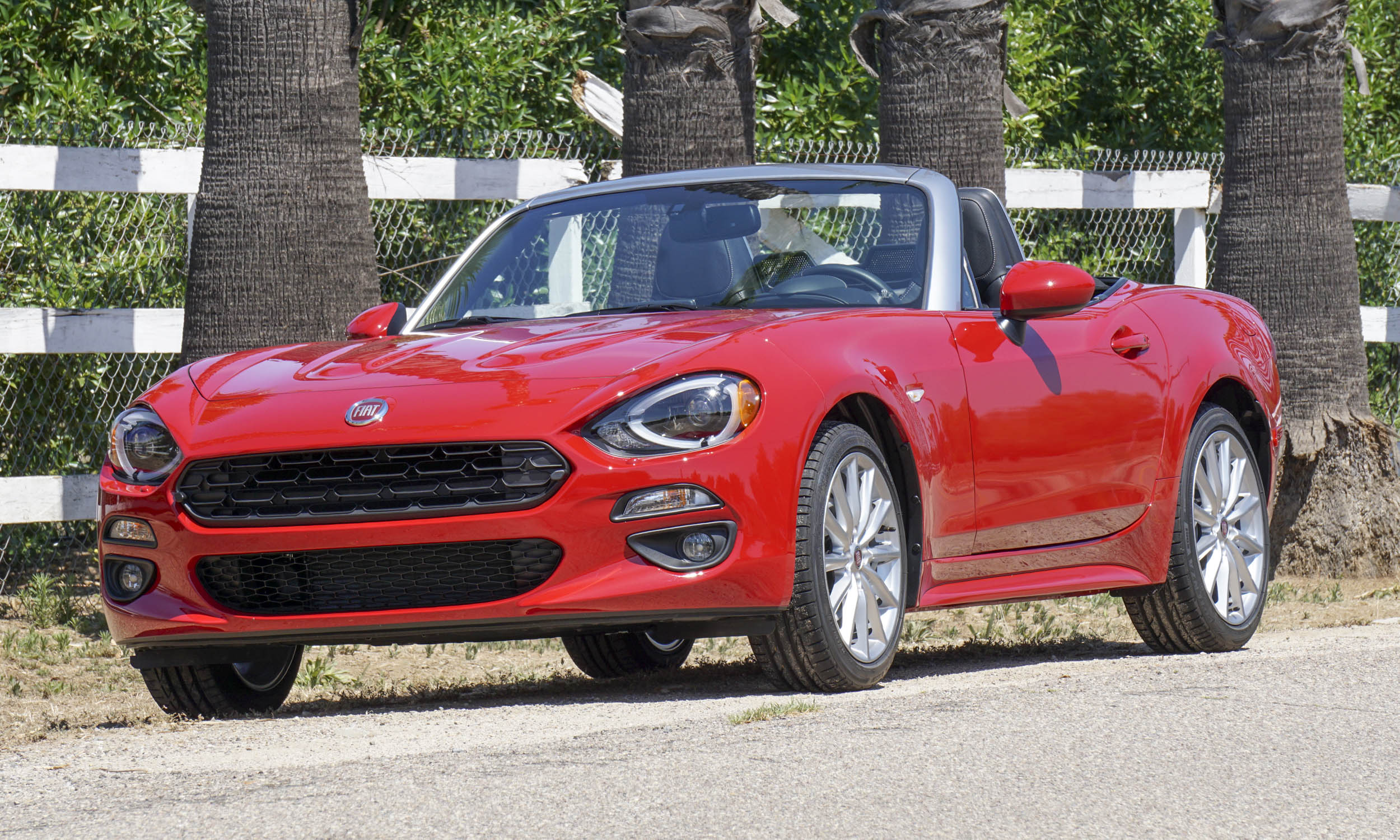 Right for You?
The Fiat 124 Spider ticks all the boxes for what’s expected of a 2-seat roadster: great styling, rear-wheel drive, balanced handling, available manual transmission and overall high fun-to-drive factor. Add to that a fuel-efficient engine, good performance and prices starting below $25,000 and you have got a pretty enticing package — which means now there are two fun, economical roadsters on the market — and for consumers that certainly can’t be bad. 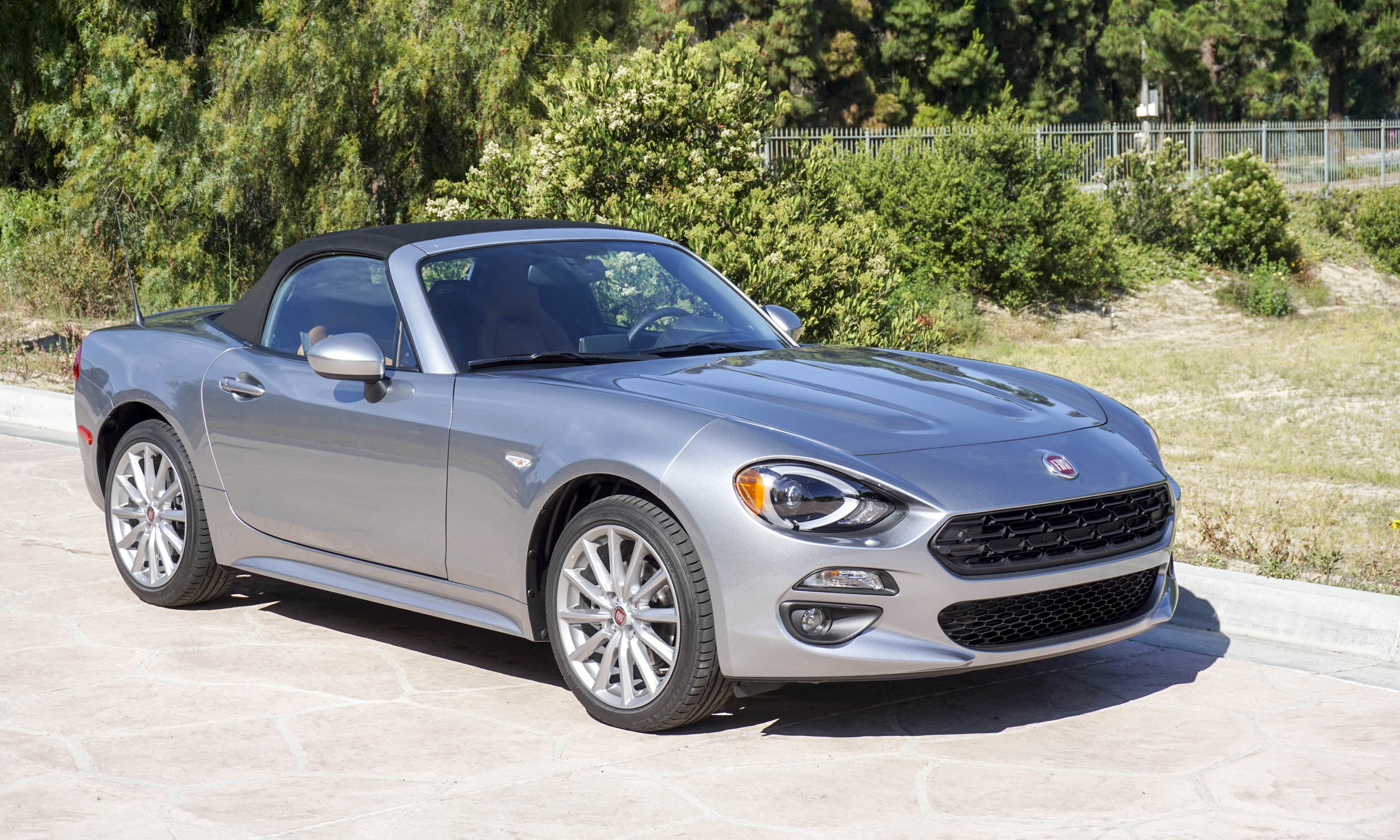