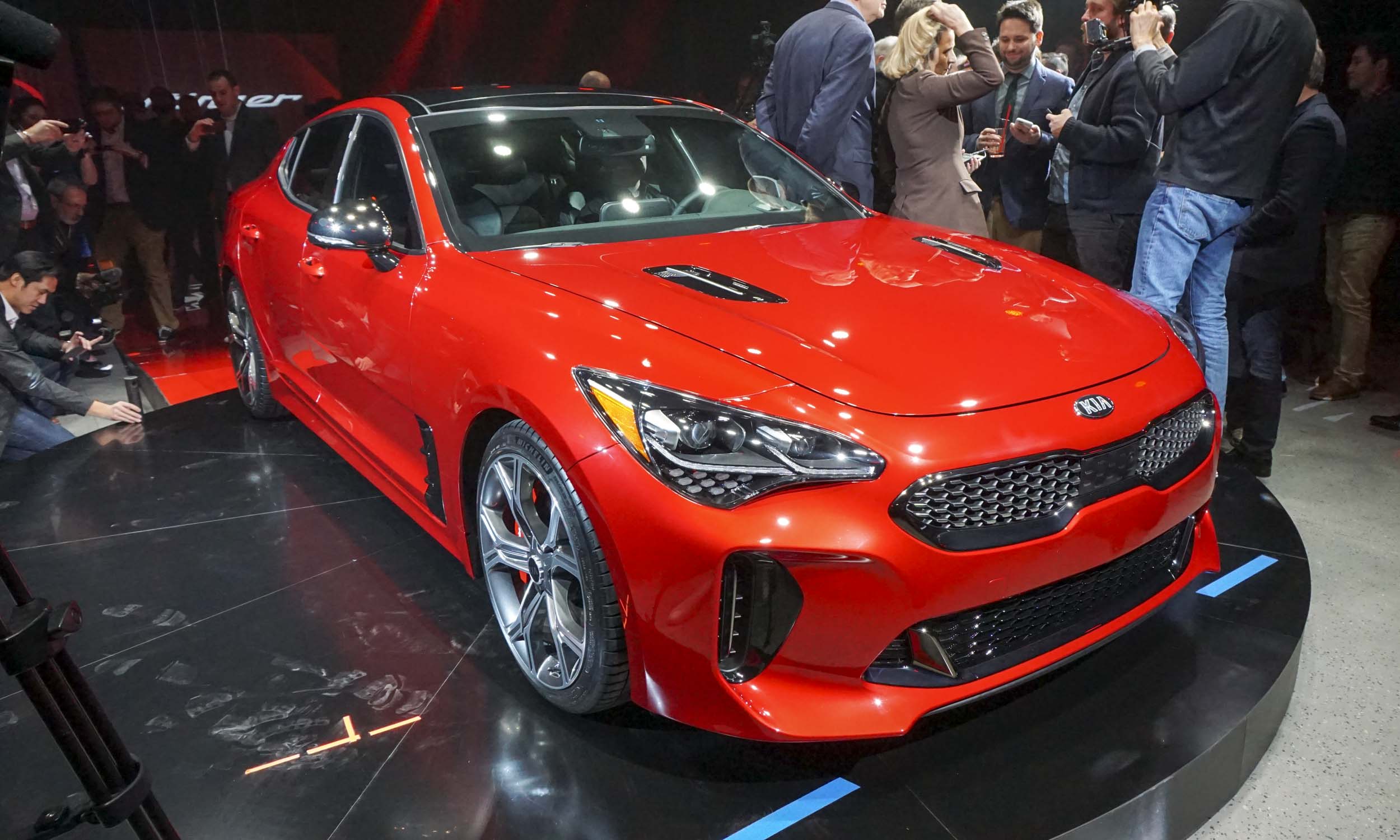 The Stinger
Kia has come a long way since the small econoboxes that introduced America to the Korean brand in the mid-1990s. Generating some buzz in the very big hive of the 2017 Detroit Auto Show, Kia introduces its first performance sedan, the Stinger. Based on the GT concept shown at the Frankfurt Motor Show in 2011, the Stinger carries through much of the styling and ideas found in that original GT. 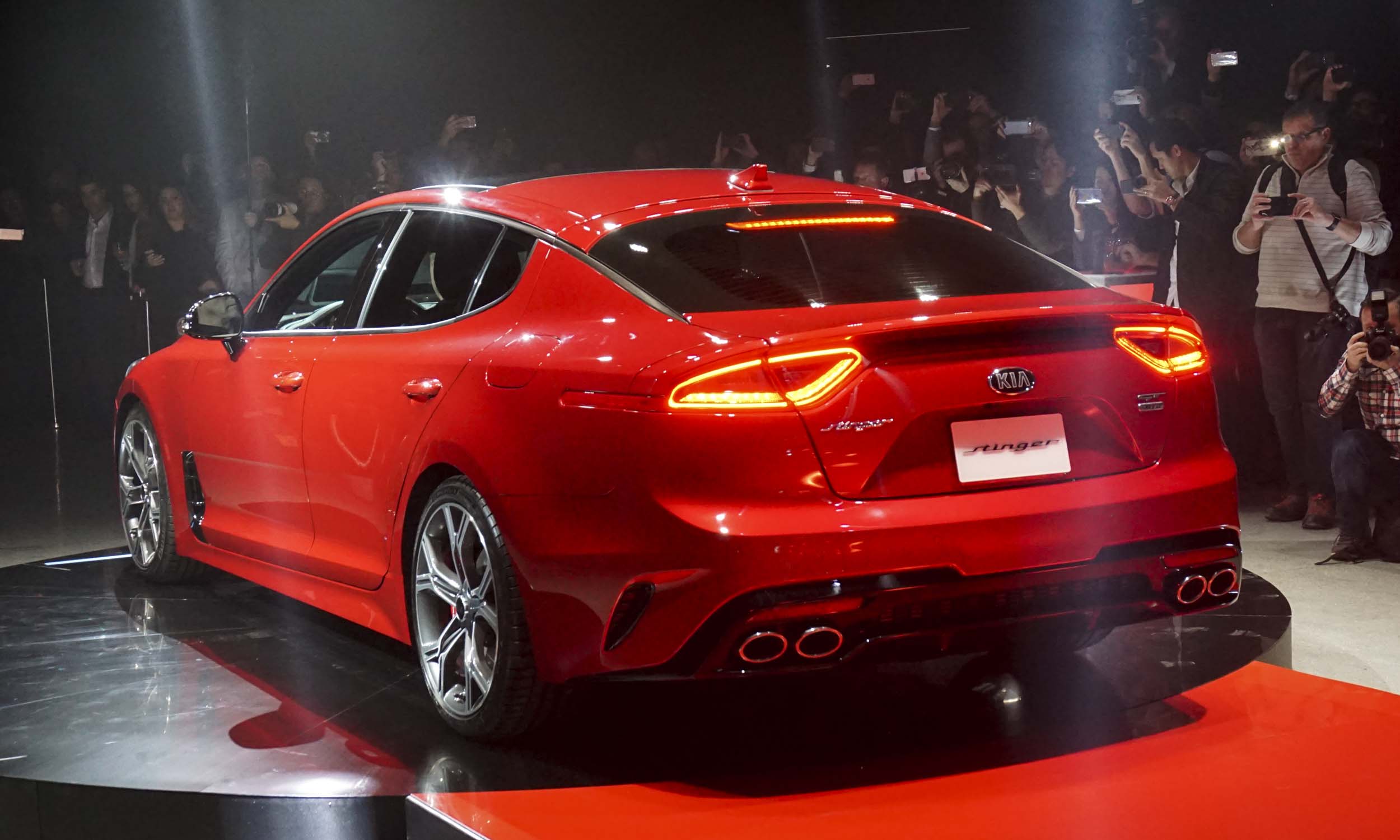 Dream Car
“Unlike any Kia that has come before it, the Stinger really is a dream car for us, and here today in Detroit, that dream is now a reality after years of commitment and hard work from a passionate group of designers, engineers and executives around the world,” said Orth Hedrick, vice president of product planning at Kia Motors America. “From its GT concept-car origins to the years of tuning and refining on the legendary Nurburgring circuit, no detail was too small to be obsessed over, and the result is simply stunning.” 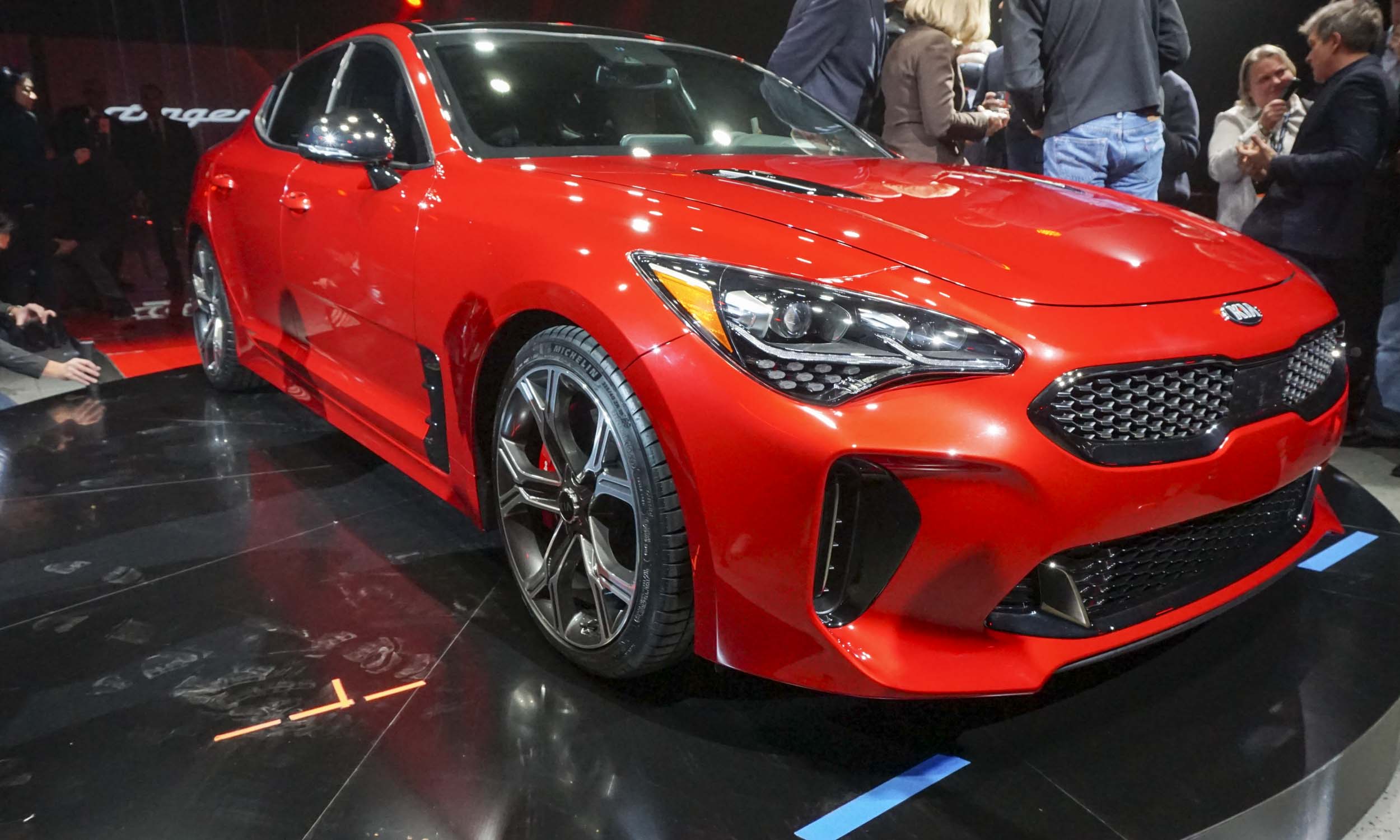 Sleek and Bold
Stinger features the signature Kia grille, but the design stands out with a wide stance, short front overhang, steeply-raked windshield, vented hood, sleek LED headlights and bold fenders. The quad oval exhaust pipes will indicate to anyone following that this is a performance car. 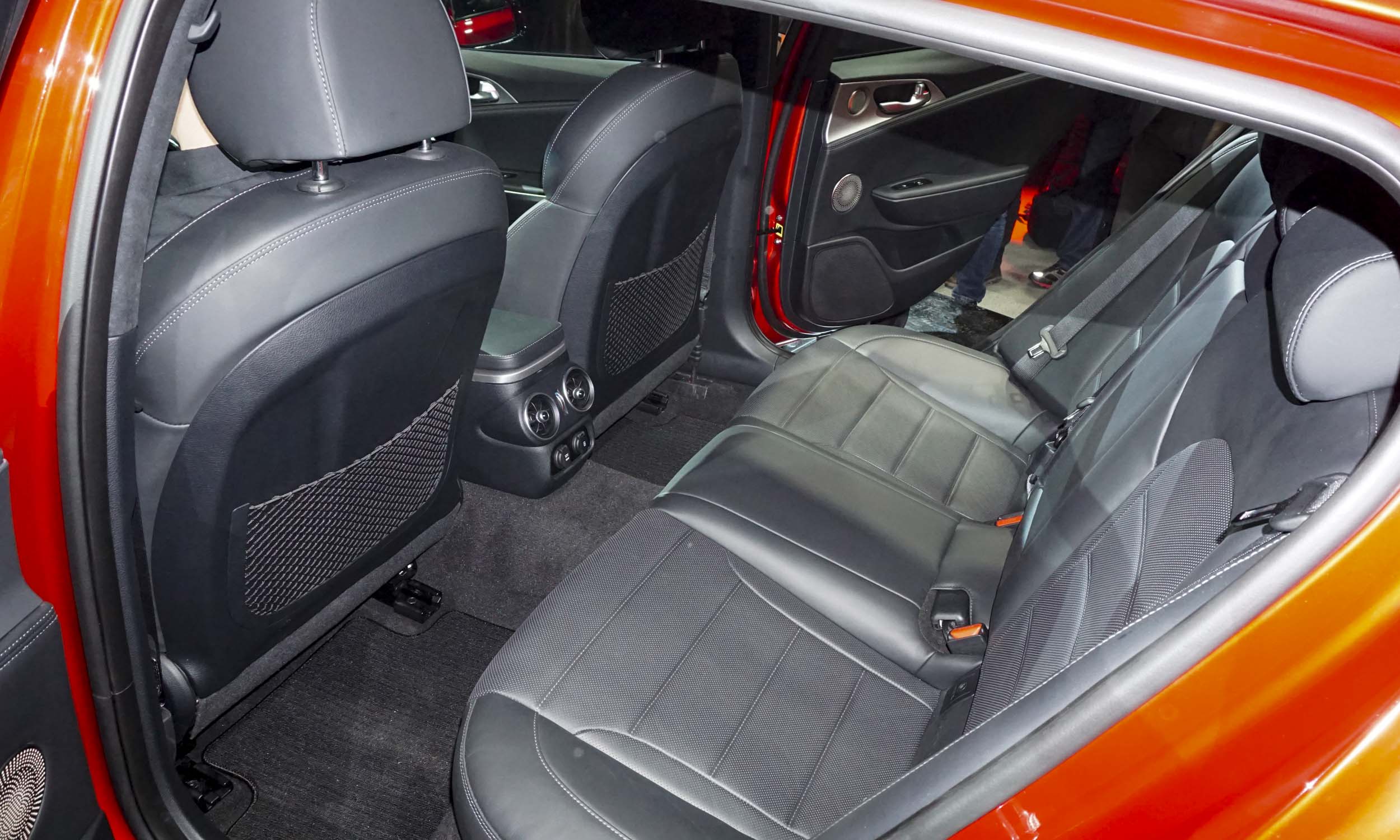 Interior Detail
Inside are deeply-contoured seats that can be covered with ultra-soft Nappa leather. The driver’s seat features additional bolsters for better support during spirited driving. A large color touchscreen display dominates the center dash with climate and ventilation controls below. Gauges are ringed in metal and feature red needles, continuing the sporty feel. The longer wheelbase allows for plenty of legroom both front and back. 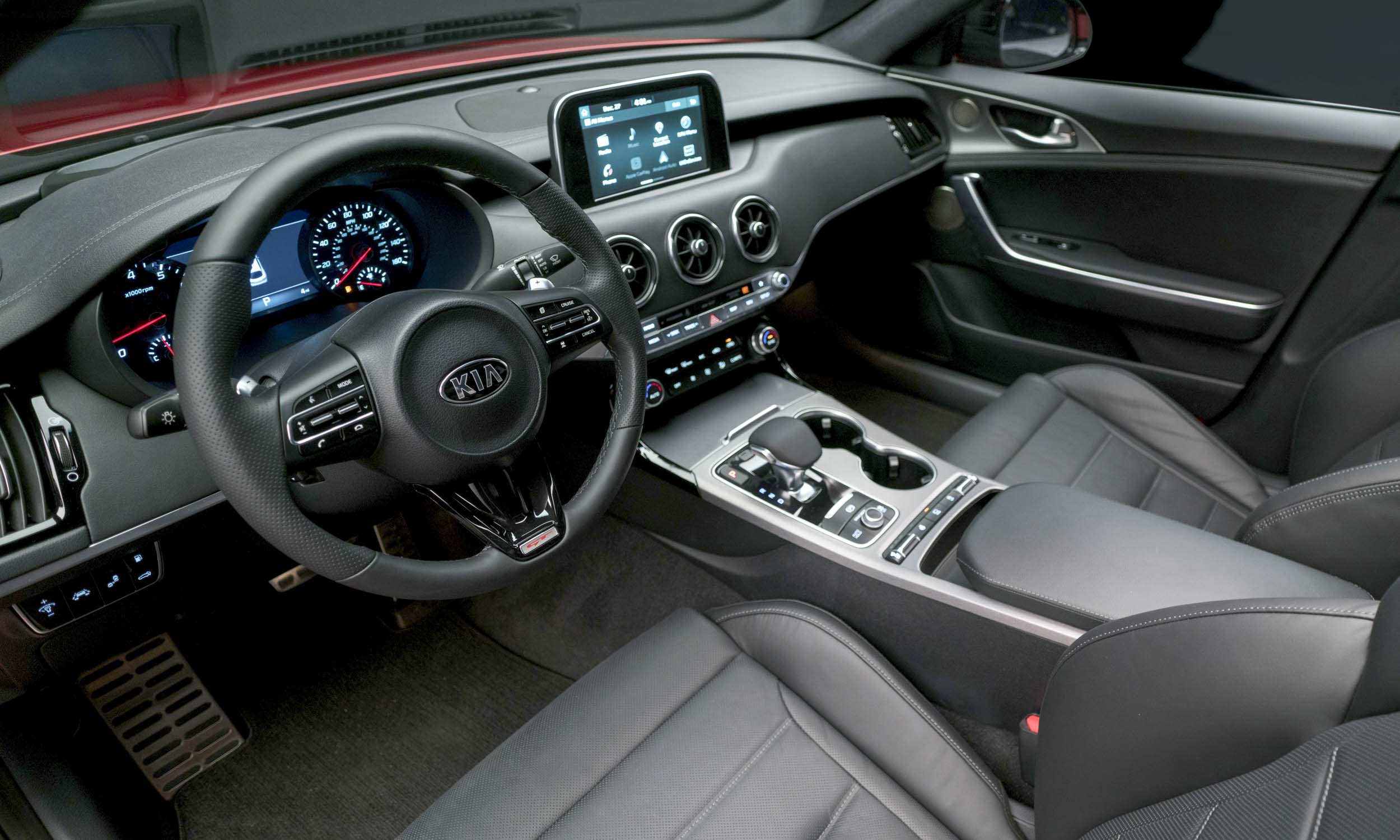 High Tech
As expected, the Stinger features the latest high-tech infotainment features. A head-up display will be available, as will a wireless charging pad for smartphones. An available premium Harman/Kardon audio system pumps out 720 watts through an external amplifier with 15 speakers, and Kia’s first under-seat-mounted subwoofers. Stinger is also be equipped with the latest version of UVO, Kia’s award-winning telematics systems. 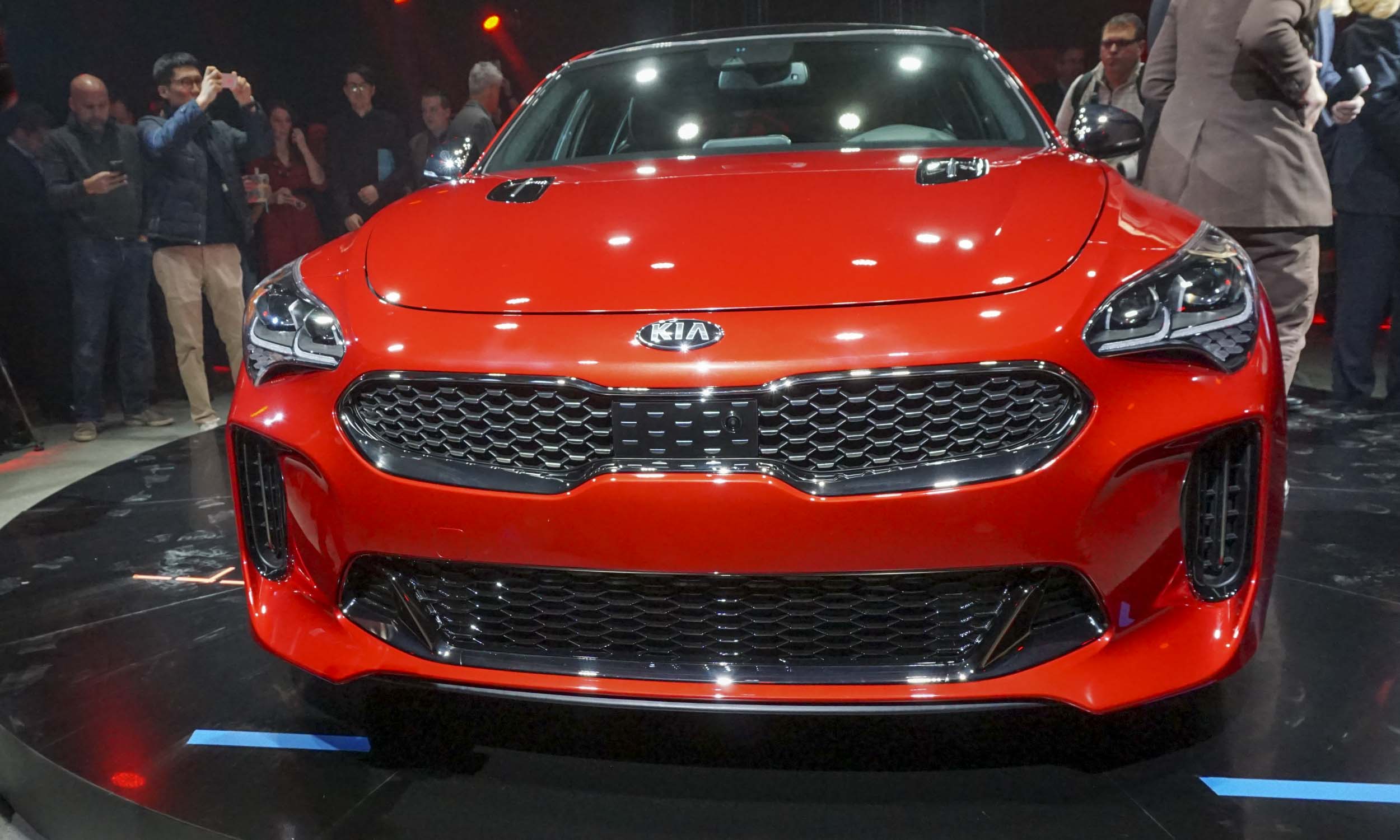 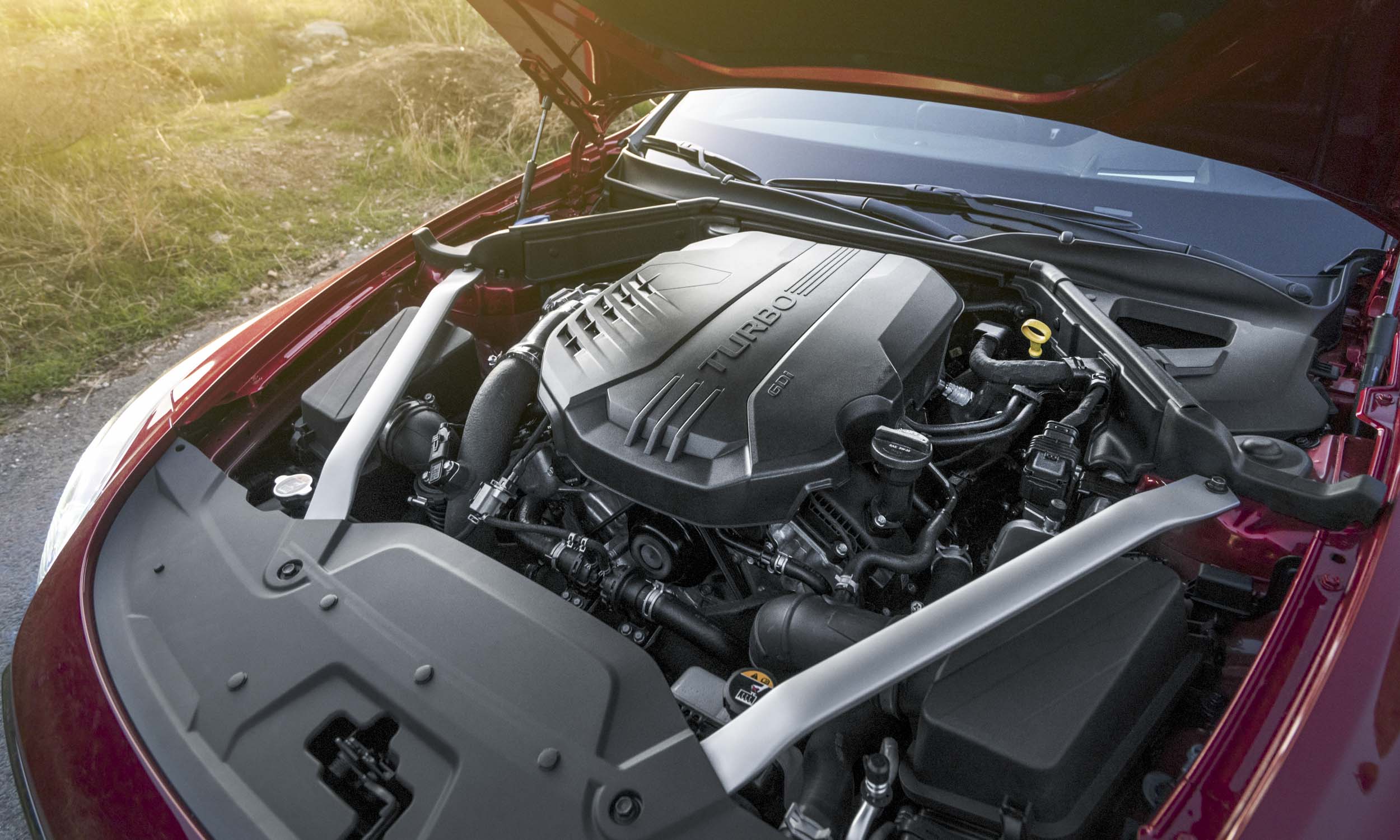 Powerful Choices
Two different powertrains will be available when the Stinger arrives later in 2017. The standard offering will be a 2.0-liter turbocharged 4-cylinder engine putting out an estimated 255 horsepower and 260 lb-ft of torque. For those willing to take the Stinger to the next level, the other choice is a 3.3-liter twin-turbo V6 that should produce 365 horsepower and 376 lb-ft of torque. With the larger engine, Kia expects the Stinger to hit 60 mph in just over 5 seconds with a top speed of 167 mph — figures not typically associated with a Kia automobile. 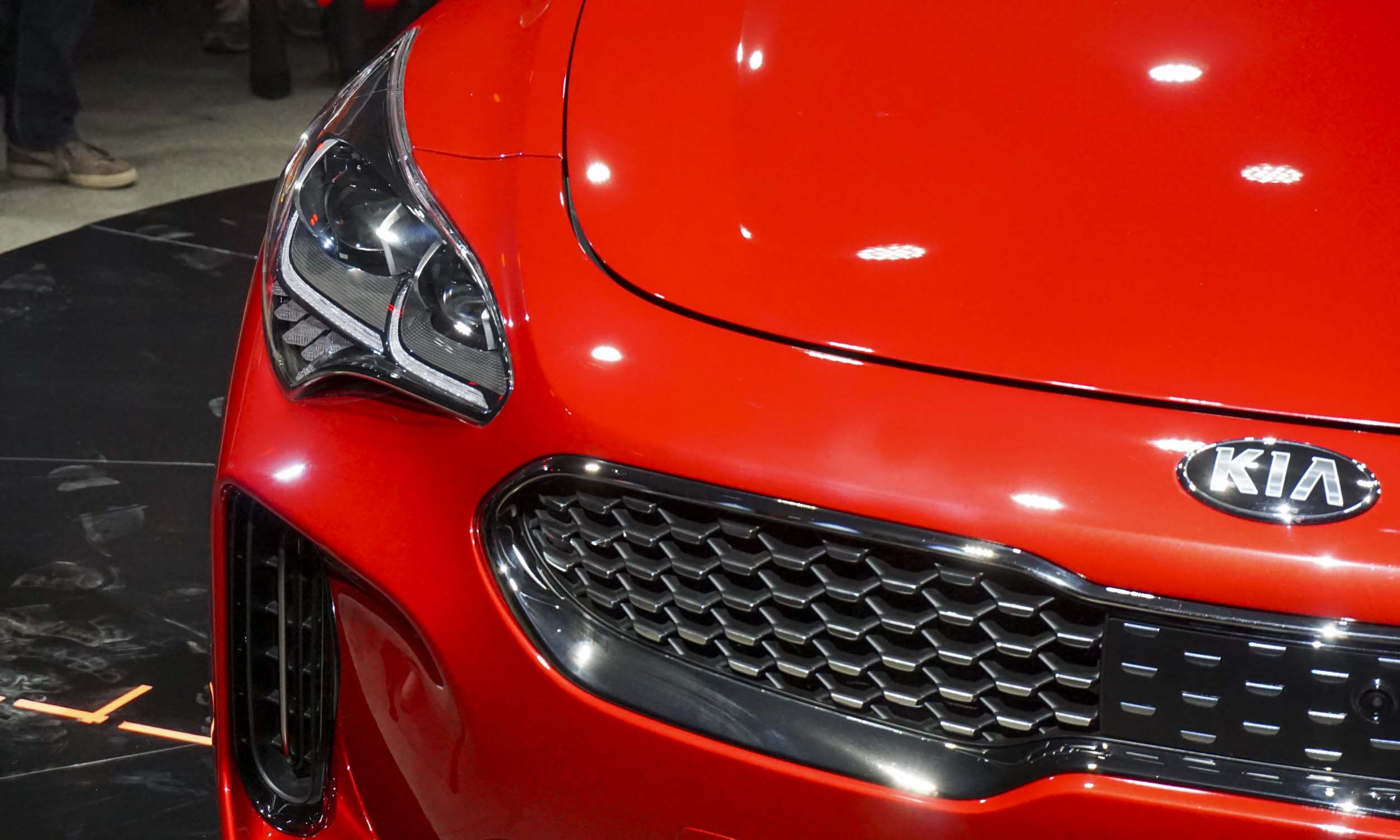 Programmable Transmission
Both engines will be teamed with a next-generation 8-speed automatic transmission. Drivers can shift manually via steering-wheel-mounted paddle shifters, or allow the transmission to do its own thing following one of five programmable drive-mode settings. 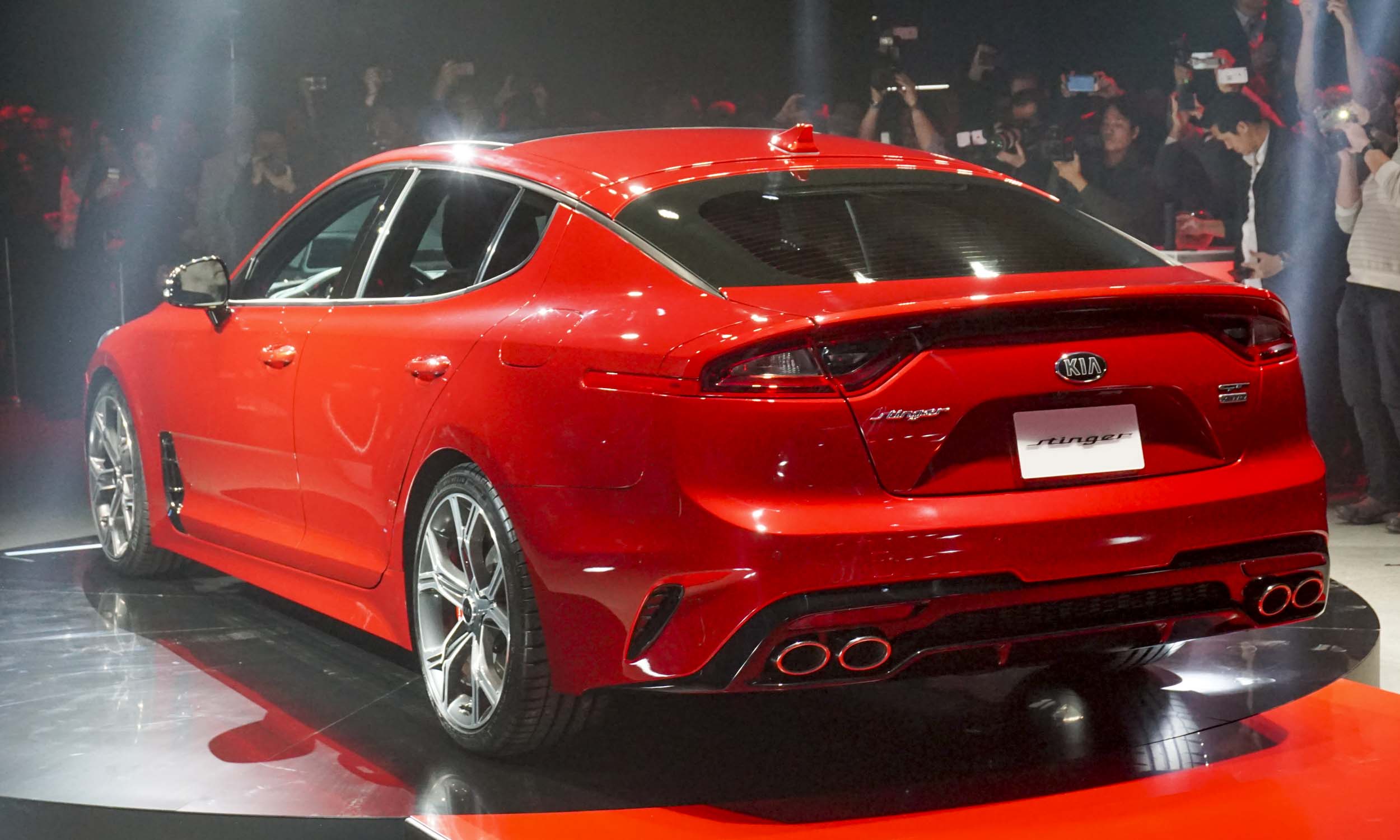 AWD or RWD
Stinger will also be Kia’s first model to offer rear- or all-wheel drive. The AWD layout features a Dynamic Torque Vectoring Control system that can automatically send power or braking force to individual wheels to help keep the car pointed in the desired direction. Rear-drive Stingers will be equipped with a mechanical limited-slip differential. 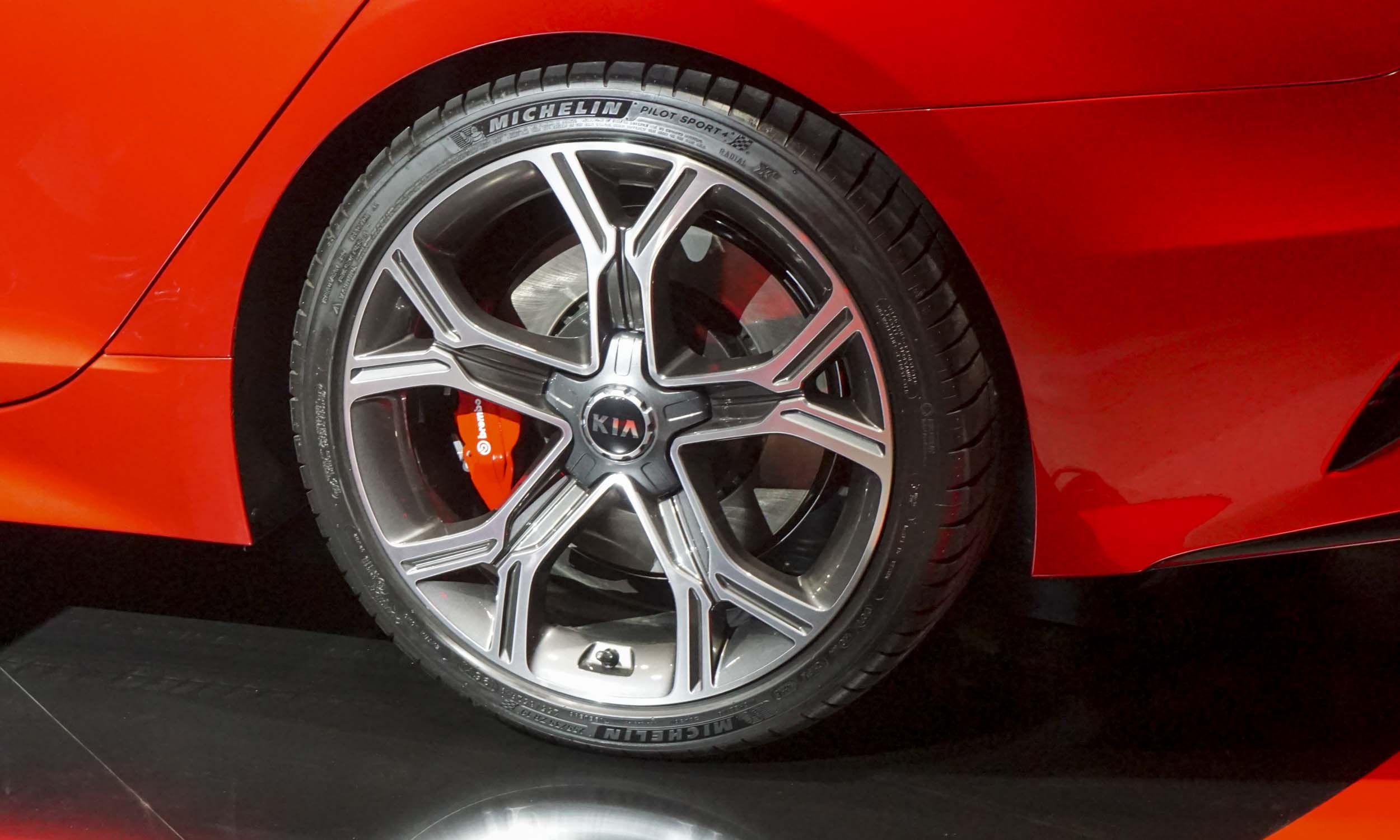 Big Wheels
Stingers powered by the 3.3-liter engine will have vented Brembo brakes with quad-piston front calipers, dual-piston on the rear. Staggered ultra-high-performance tires help get the power to the road, worn on 19-inch alloy wheels. Eighteen-inch wheels are standard on variants with the base engine. 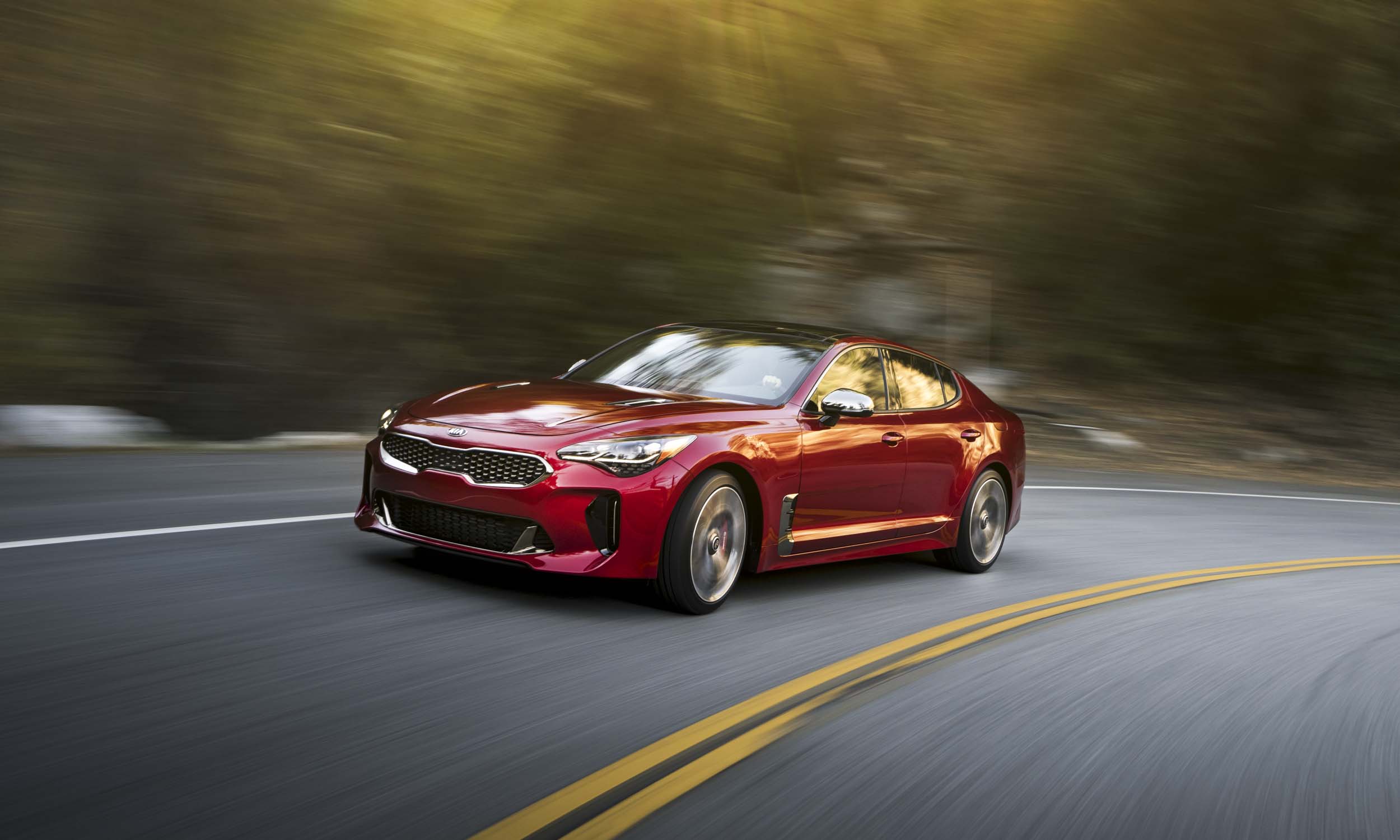 Adjustable Suspension
With a chassis made of 55 percent advanced high-strength steel, the Stinger should offer a solid, quiet ride. The Stinger also has Kia’s first implementation of Dynamic Stability Damping Control, which allows the driver to modify the way the car is handling via the electronically-adjustable suspension. Five different modes can be set: Personal, Eco, Sport, Comfort and Smart. 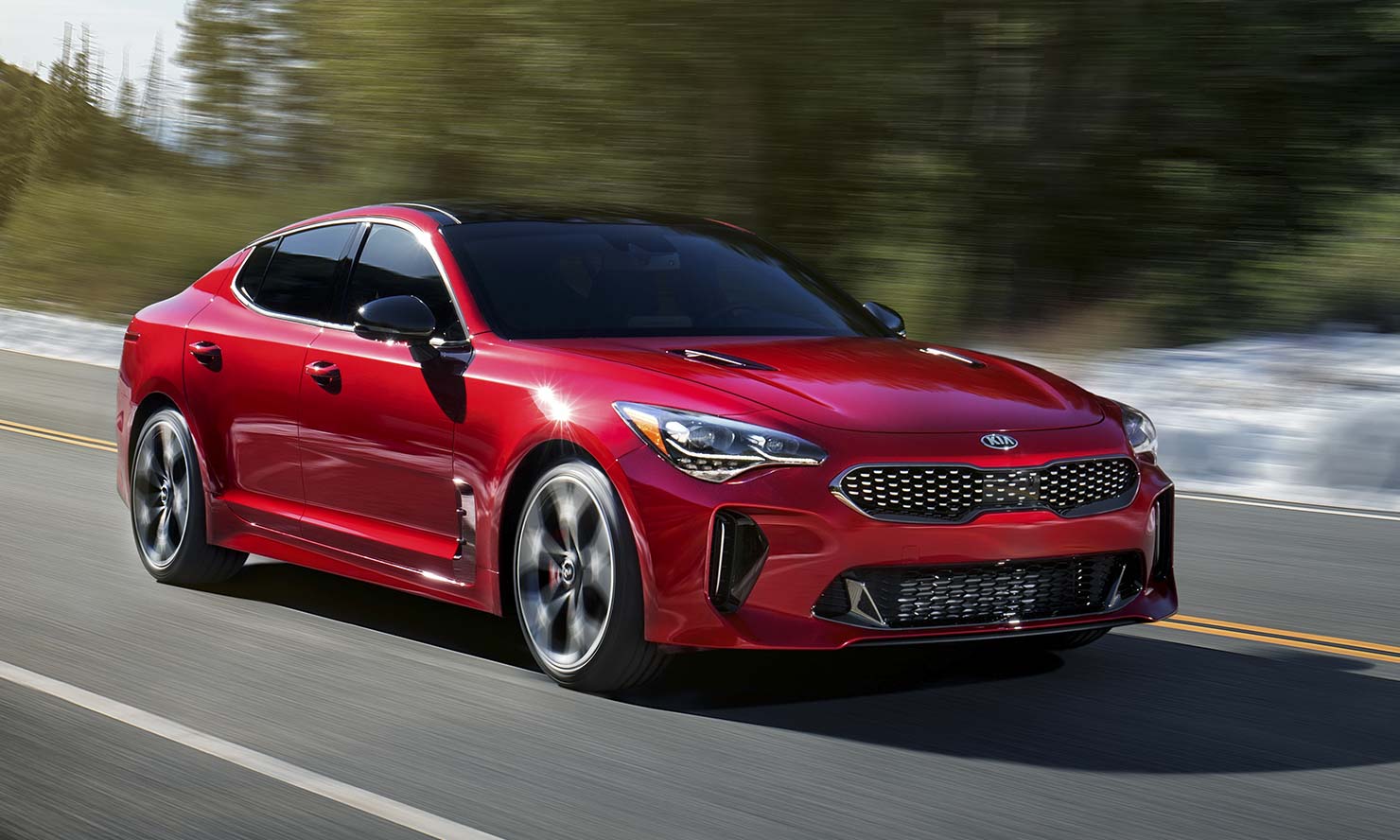 High Value
The Stinger certainly shows a new direction for Kia, a brand that has become known for high-value high-quality family transportation. Pricing for the Stinger will be released closer to its on-sale date, which will be later this year; expect this new sport sedan to be an excellent value.