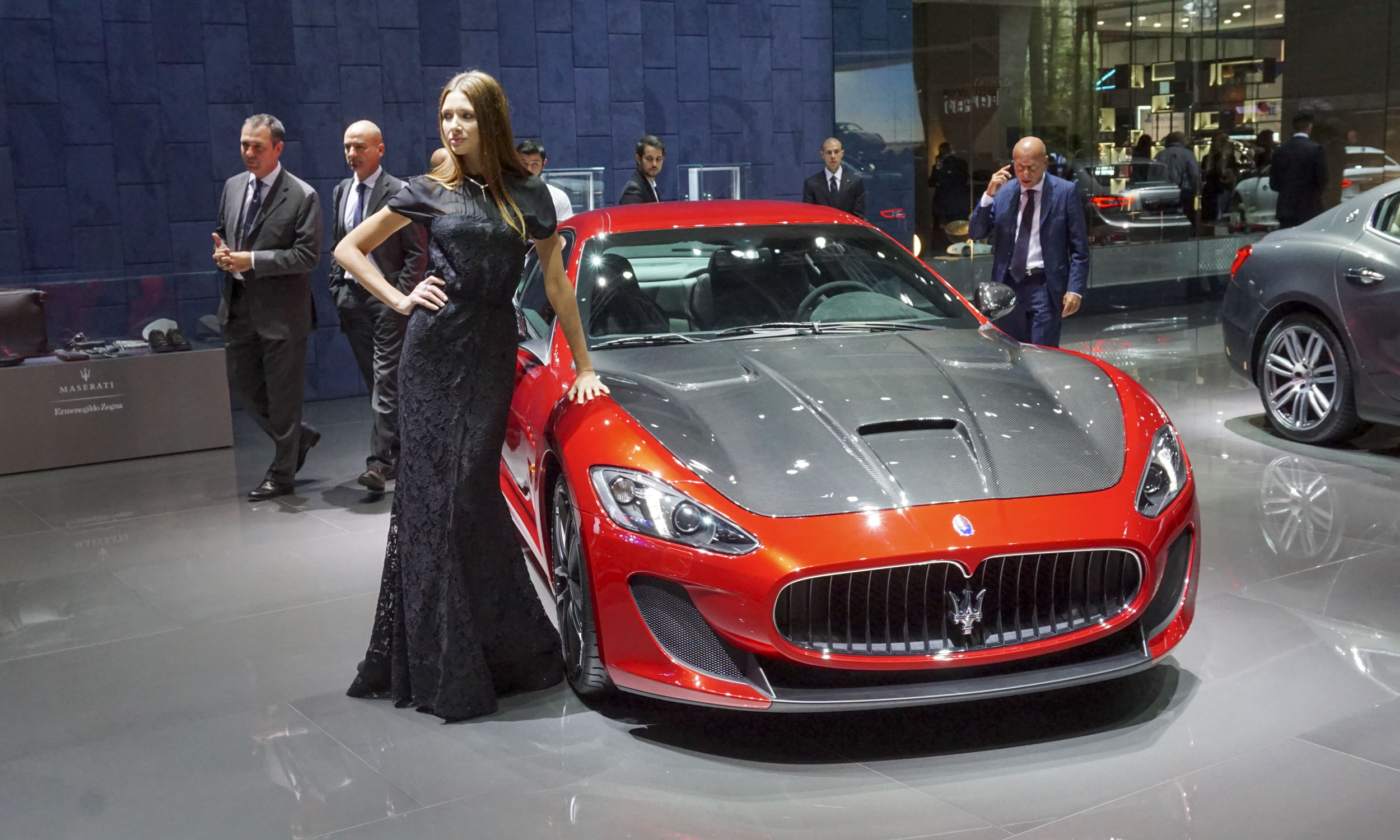 Heart Stoppers
A tough truth about being an automotive enthusiast means you usually don’t get the opportunity to drive the cars you desire, but luckily just seeing a high-powered, sexy machine that makes your heart skip a beat can be enough. And at the biennial motor show in the City of Love there were plenty of beat-skipping examples from Ferrari, Audi and others that broke cover and stole our hearts. Here’s a look at some beautiful models (yes, we’re still talking cars) at the 2016 Paris Motor Show that auto enthusiasts would love to get to know better. 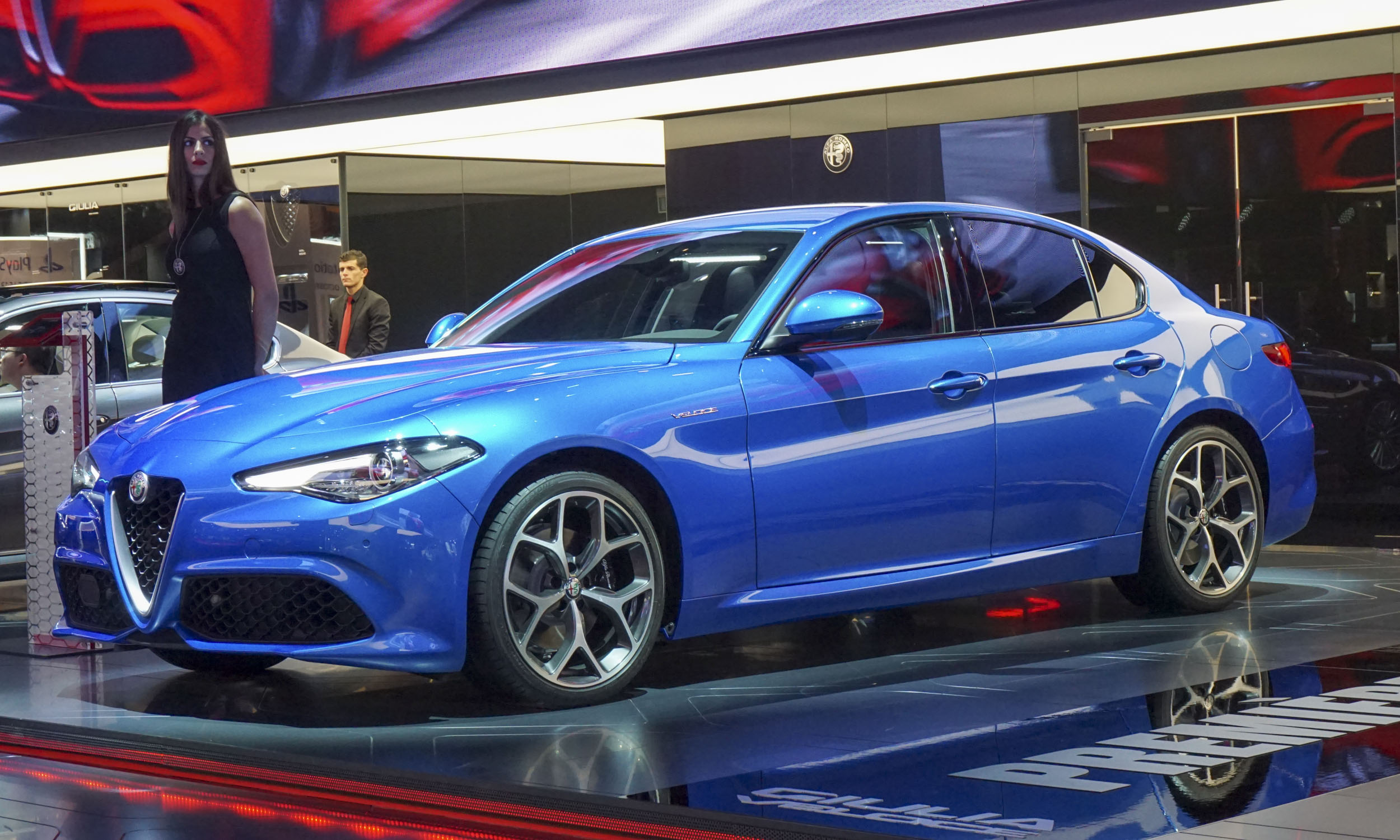 Alfa Romeo Giulia Veloce
We can’t get enough of this beautiful Italian sport sedan, and in Paris this year Alfa debuted the latest version — the Veloce. Not quite as powerful as the 510-horsepower Quadrifoglio, the Veloce still packs a punch with a 2.0-liter turbocharged engine putting out 280 horsepower, teamed with an 8-speed automatic transmission. 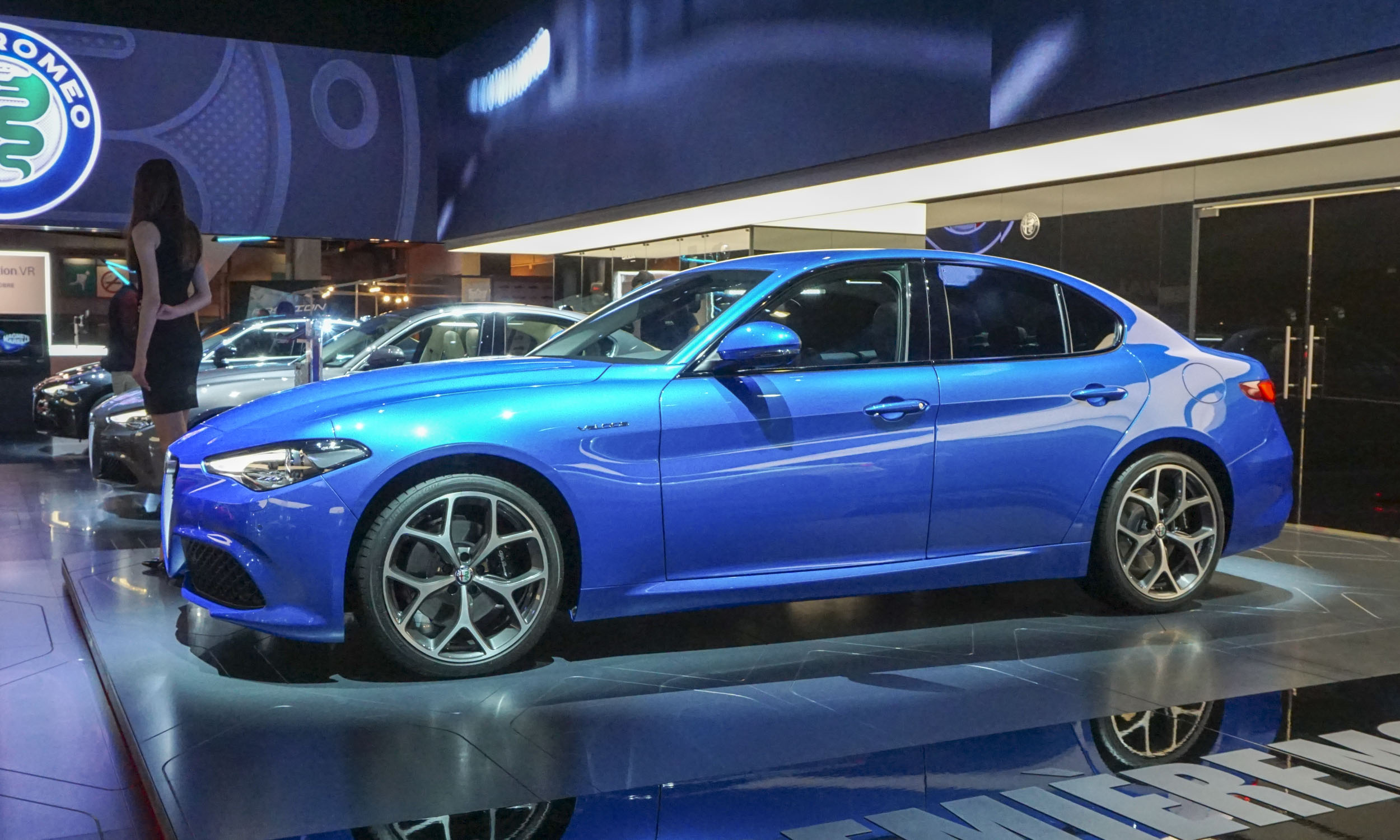 Alfa Romeo Giulia Veloce
Confident handling will definitely be part of the package since the Veloce sports Alfa’s Q4 full-time all-wheel-drive system. Although the Giulia is already available in other parts of the world, the Italian sport sedan has not arrived in America — yet. We can only hope that when it does, Veloce will be part of the U.S. Giulia family. 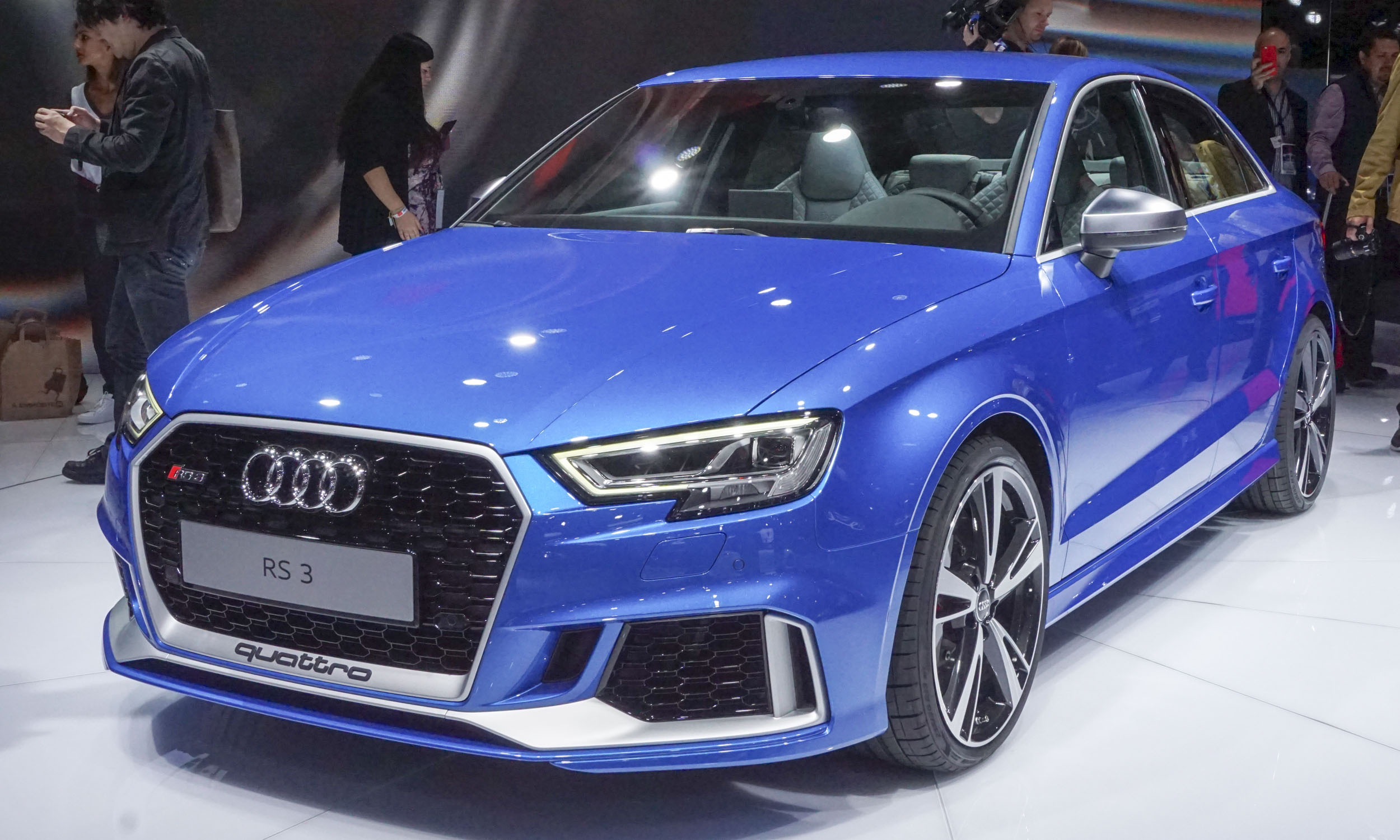 Audi RS 3
We love a good “sleeper” car — one that might go unnoticed by the general public but is actually a high-powered beast — and the new Audi RS 3 certainly fits the bill. Sure, the RS 3 has unique styling cues such as its grille, LED headlights, wide fender flares and rear spoiler, but it probably won’t be noticed as anything other than a small sedan by anyone except those in the know. 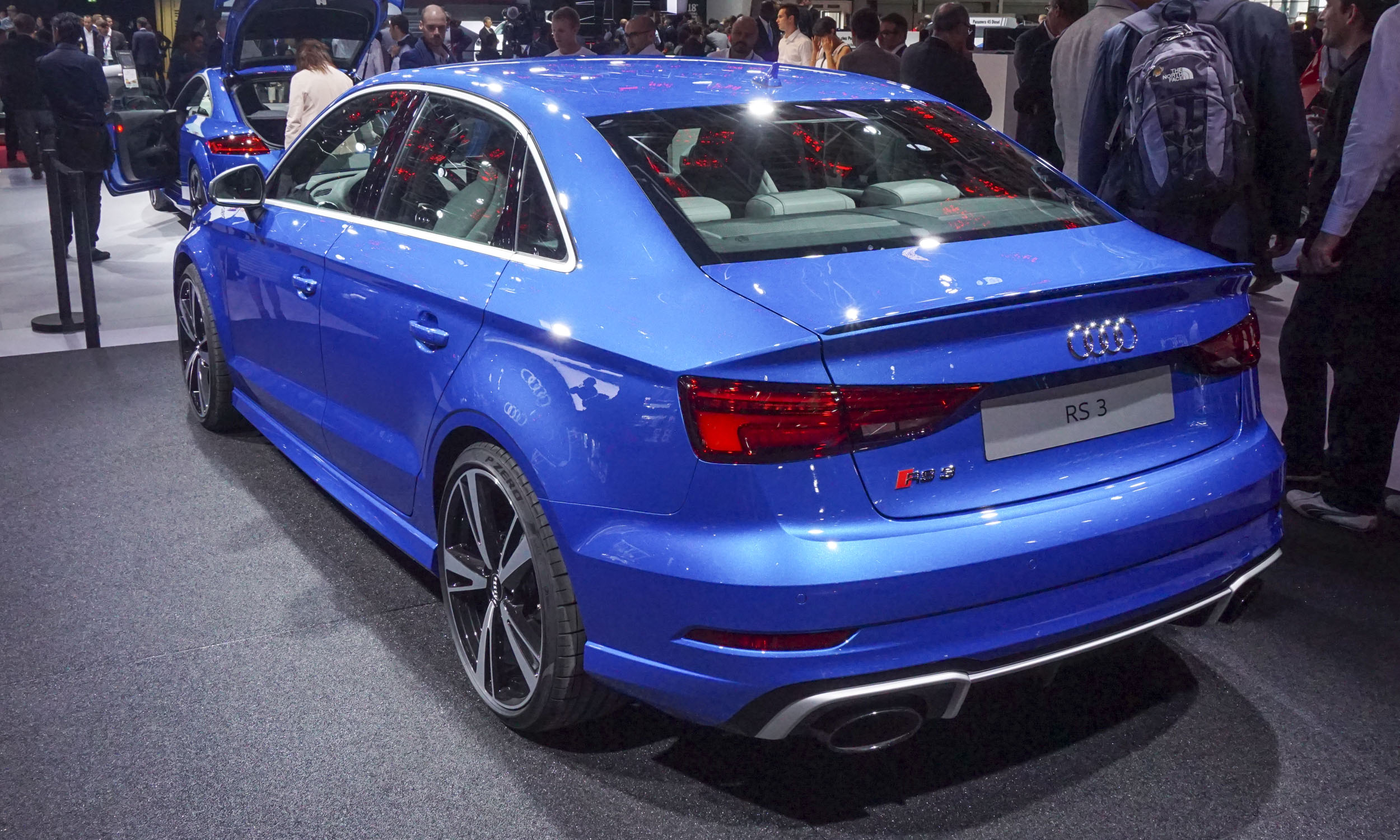 Audi RS 3
And those who do will know that the RS 3 boasts a 400-horsepower 5-cylinder engine, quattro all-wheel drive and can reach 60 mph in around 4 seconds with a top speed of 174 mph. Of course, the roaring exhaust note might be a dead giveaway about this special sport sedan. The best part of all — this one IS coming to America. 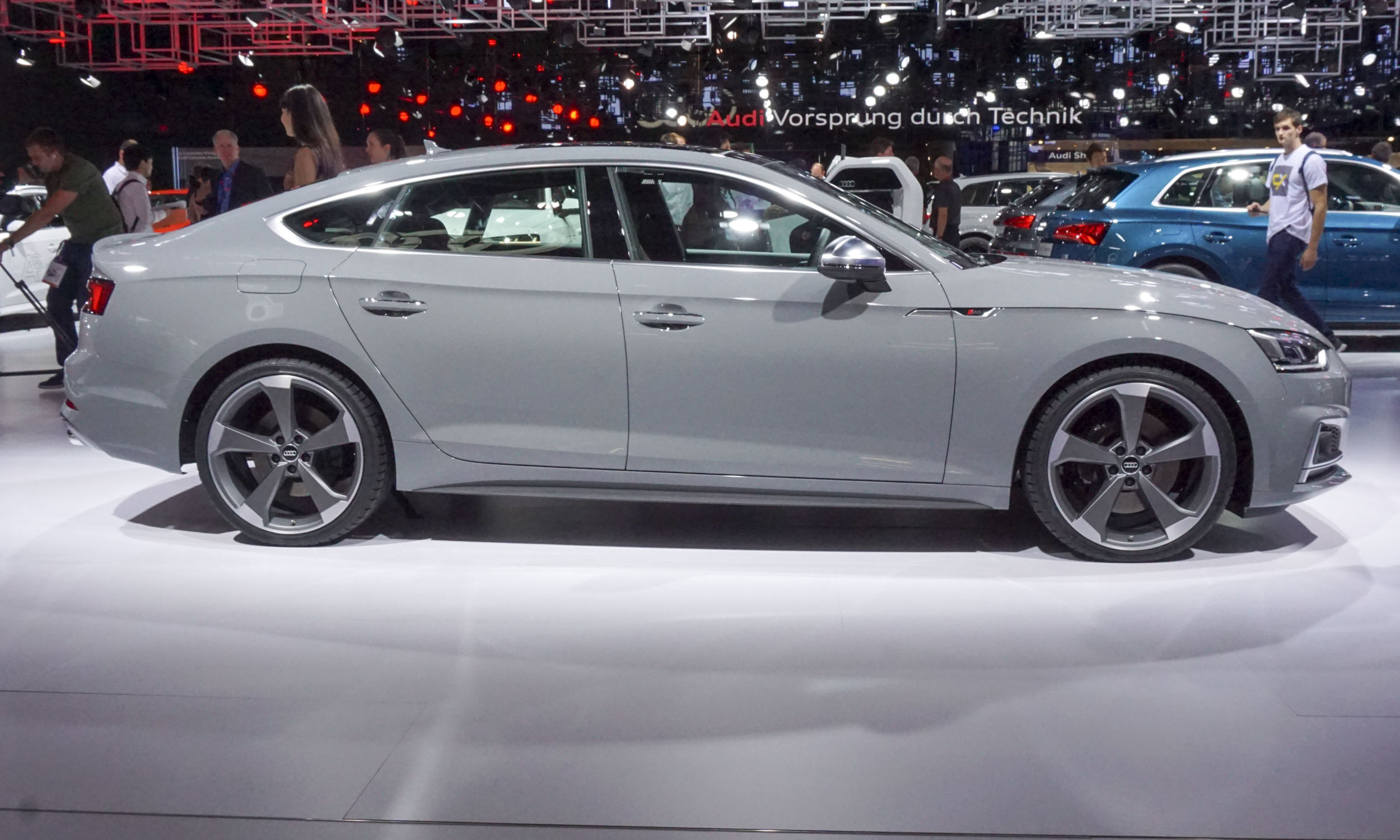 Audi S5 Sportback
It was a busy day at the Audi stand during the 2016 Paris Motor Show press preview — one of the highlights being this all-new S5 Sportback. Following in the tracks of the luxurious Audi A7 / S7, the S5 offers the luxury and performance of a proper sport sedan while adding the versatility of a rear hatch rather than a standard trunk. 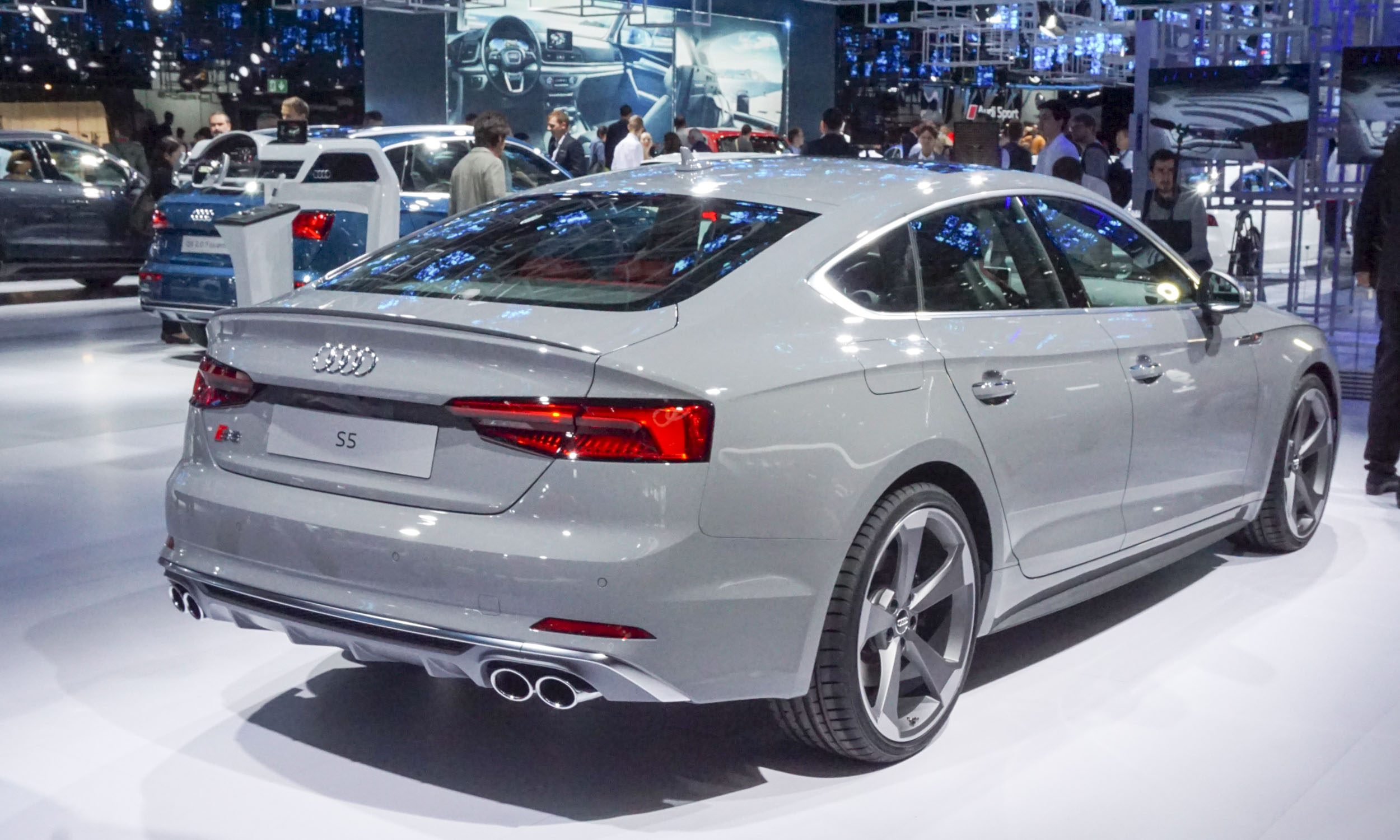 Audi S5 Sportback
Make no mistake, the S5’s versatility in no way detracts from its sportiness — the hot hatch gets a newly-developed turbocharged V6 engine producing 354 horsepower. And even with its impressive acceleration — 60 mph in around 4.5 seconds — the S5 also boasts fuel economy as high as 32 mpg. With the S5 Audi has created a car to live with every day, and those would be great days behind the wheel. 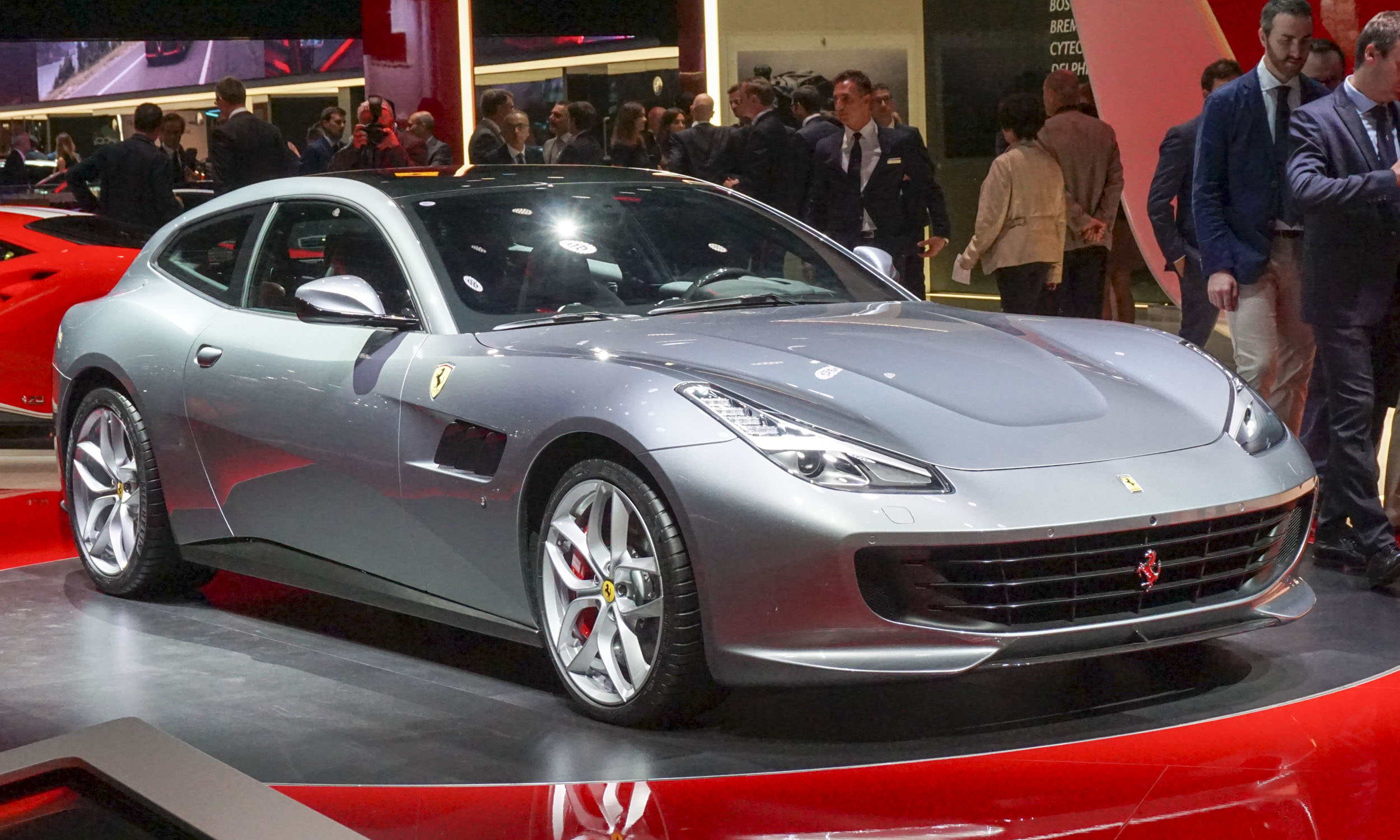 Ferrari GTC4Lusso T
A Ferrari press conference is always exciting, and this year the Italian marque celebrates its 70th anniversary, so there were a number of new models as well as special editions on display in Paris. Most noteworthy was the introduction of the GTC4Lusso T. Granted, the name does not exactly roll off the tongue, but we can forgive a lot for a car such as this. The GTC4Lusso made its debut earlier this year at the Geneva Motor Show, and in Paris the added T in the name indicates that this version will sport a 3.9-liter turbocharged V8 engine producing just over 600 horsepower. 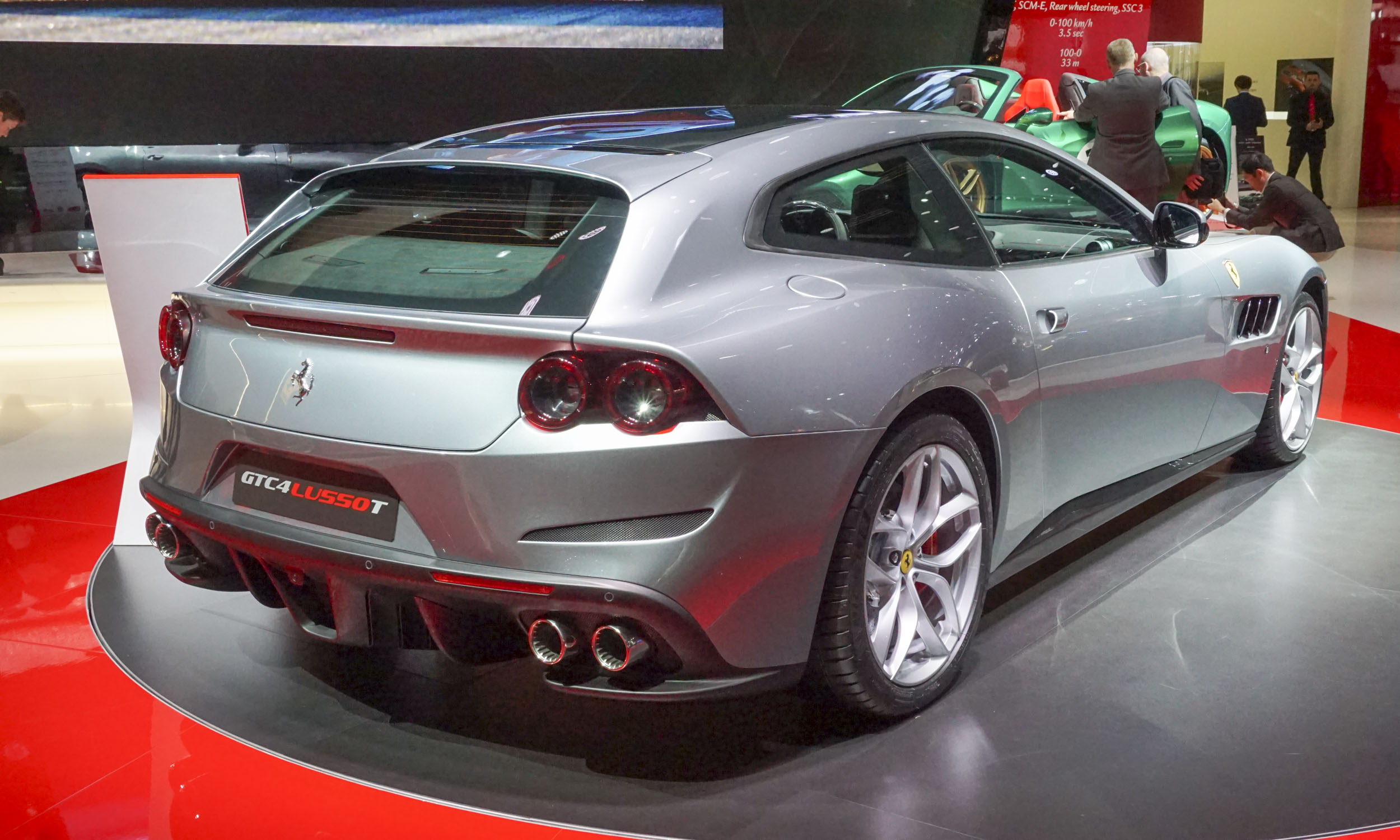 Ferrari GTC4Lusso T
The GTC4Lusso T is unique in the Ferrari lineup in that it seats four, has a sportback design and sends power to the road through a sophisticated all-wheel-drive system. Perhaps this would be the best Ferrari to take camping — although if Ferrari owners ever longed for the great outdoors, they would most certainly be “glamping” beside the GTC4Lusso T. 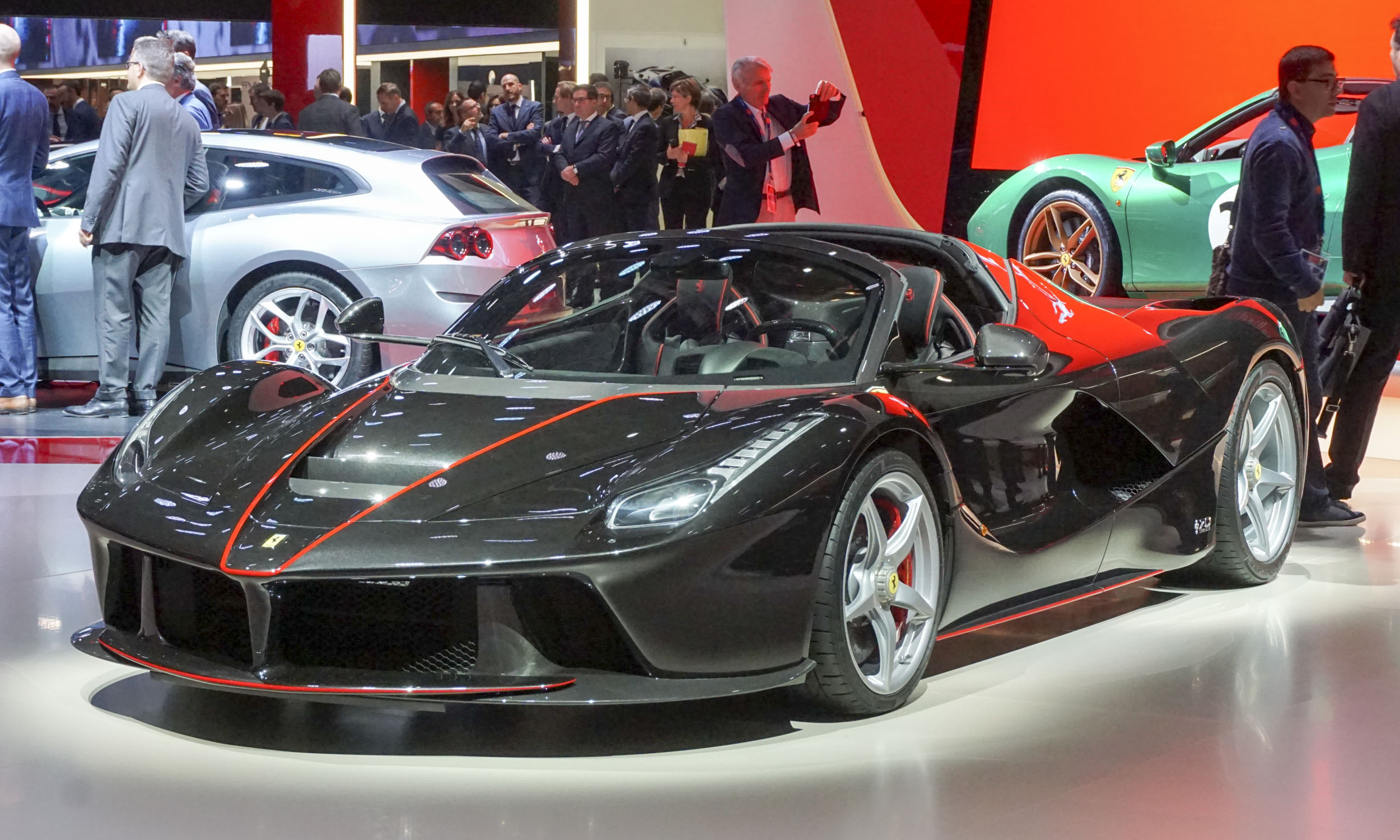 Ferrari LaFerrari Aperta
Ever since Ferrari took the wraps off the extreme LaFerrari there have been rumors that an open-top version was in the works. No longer a rumor, the LaFerrari Aperta made its official debut in Paris. The open-top hypercar maintains the same torsional rigidity as the hardtop and utilizes the same V12 hybrid powerplant that produces an astounding 949 horsepower. 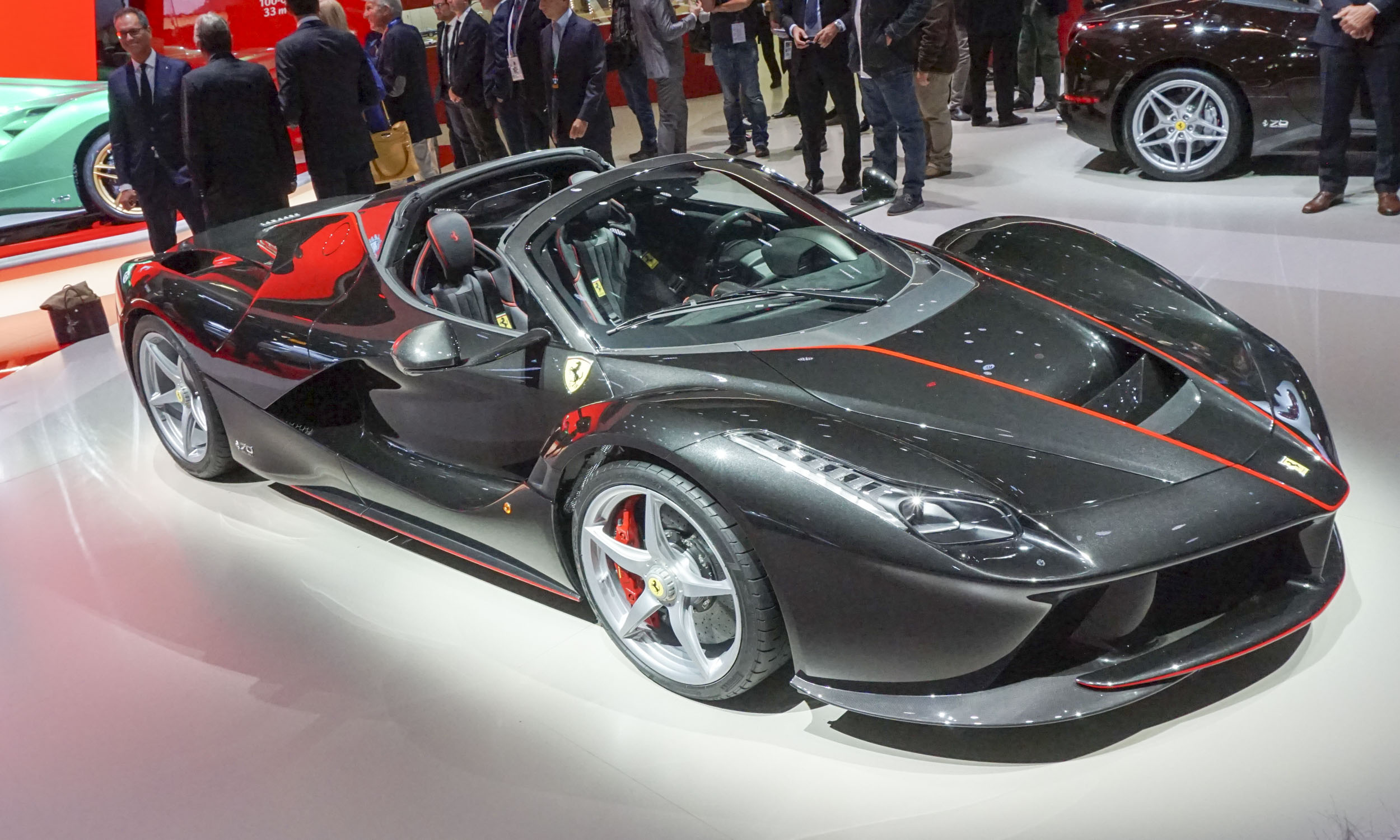 Ferrari LaFerrari Aperta
Drivers and passengers will need to hold onto their hats in this convertible — 60 mph comes up in under 3 seconds, 120 mph in less than 7 ticks and top speed is close to 220 mph. Only 209 Apertas will be built — 200 for customers and nine that will be kept by Ferrari for shows and other promotional opportunities. Price? Don’t bother asking how much, because it doesn’t matter: all 200 have already been sold. 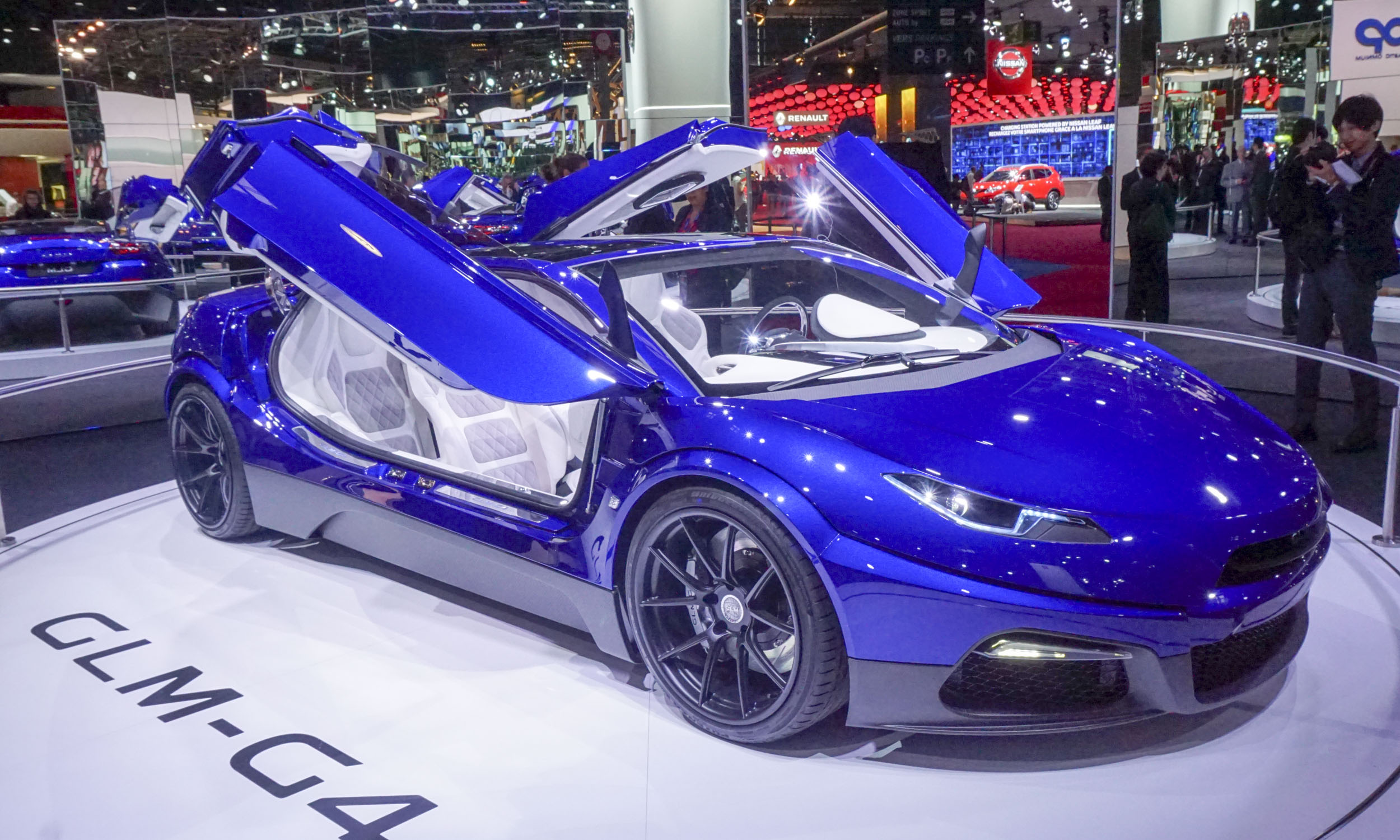 GLM G4
If you haven’t heard of GLM before, don’t be surprised — we hadn’t either. The electric vehicle manufacturer has been around for several years and has already produced an EV vehicle in Japan. And the company certainly made itself known at this year’s Paris show. The G4 is a luxury exotic with an elegant interior offering seating for four. Although cabin access on many exotics requires some contortionist skills, the G4 makes the task easy with front and rear scissor doors. 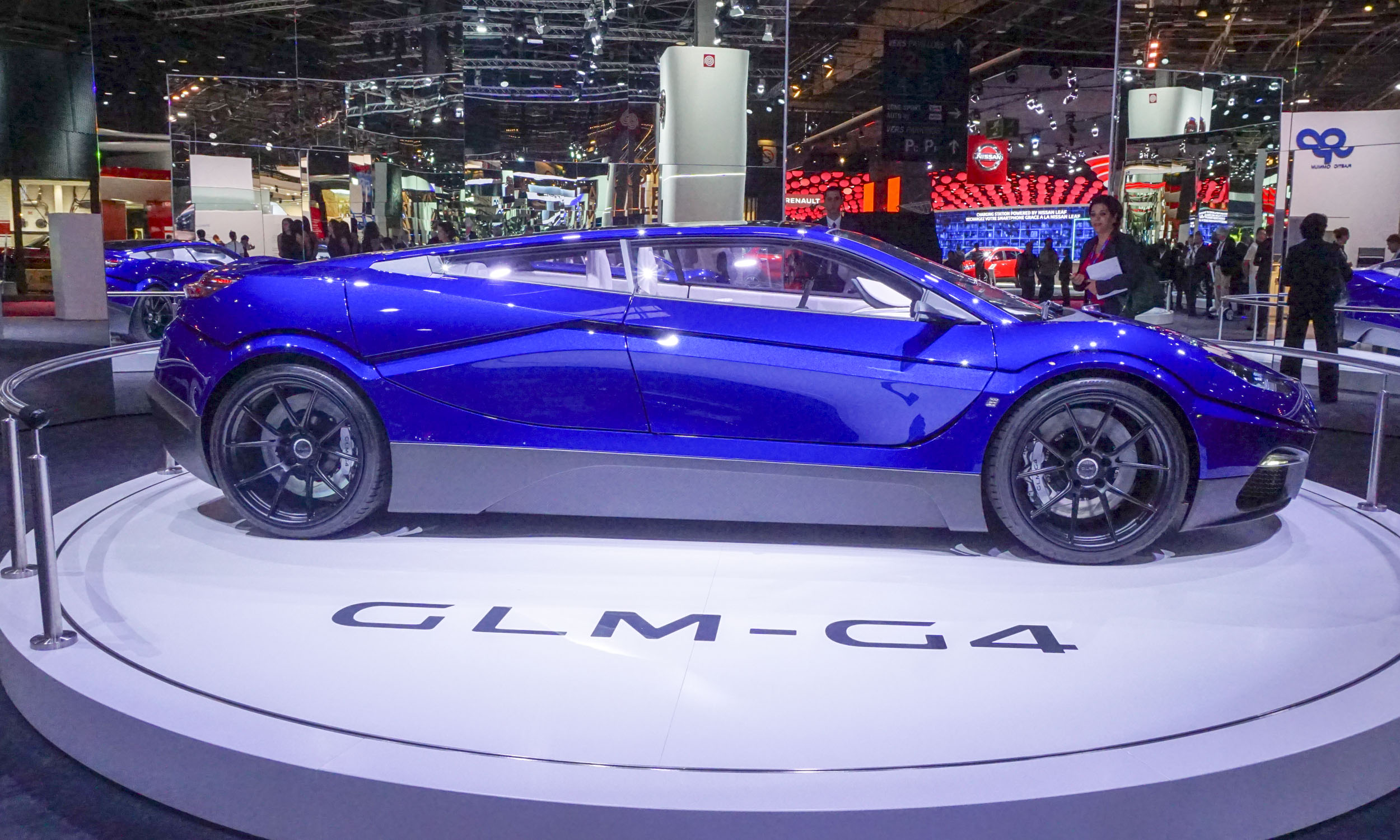 GLM G4
Unlike most exotics the G4 is all electric. Using twin electric motors — one at each axle — with a total output of more than 530 horsepower, the G4 can reach 60 mph in less than 3.7 seconds. GLM also claims a range of just under 250 miles. Although we’ve seen plenty of one-of-a-kind vehicles like the G4 that never made it to production, GLM seems to have the credentials to make this a real car. We’ll keep our fingers crossed. 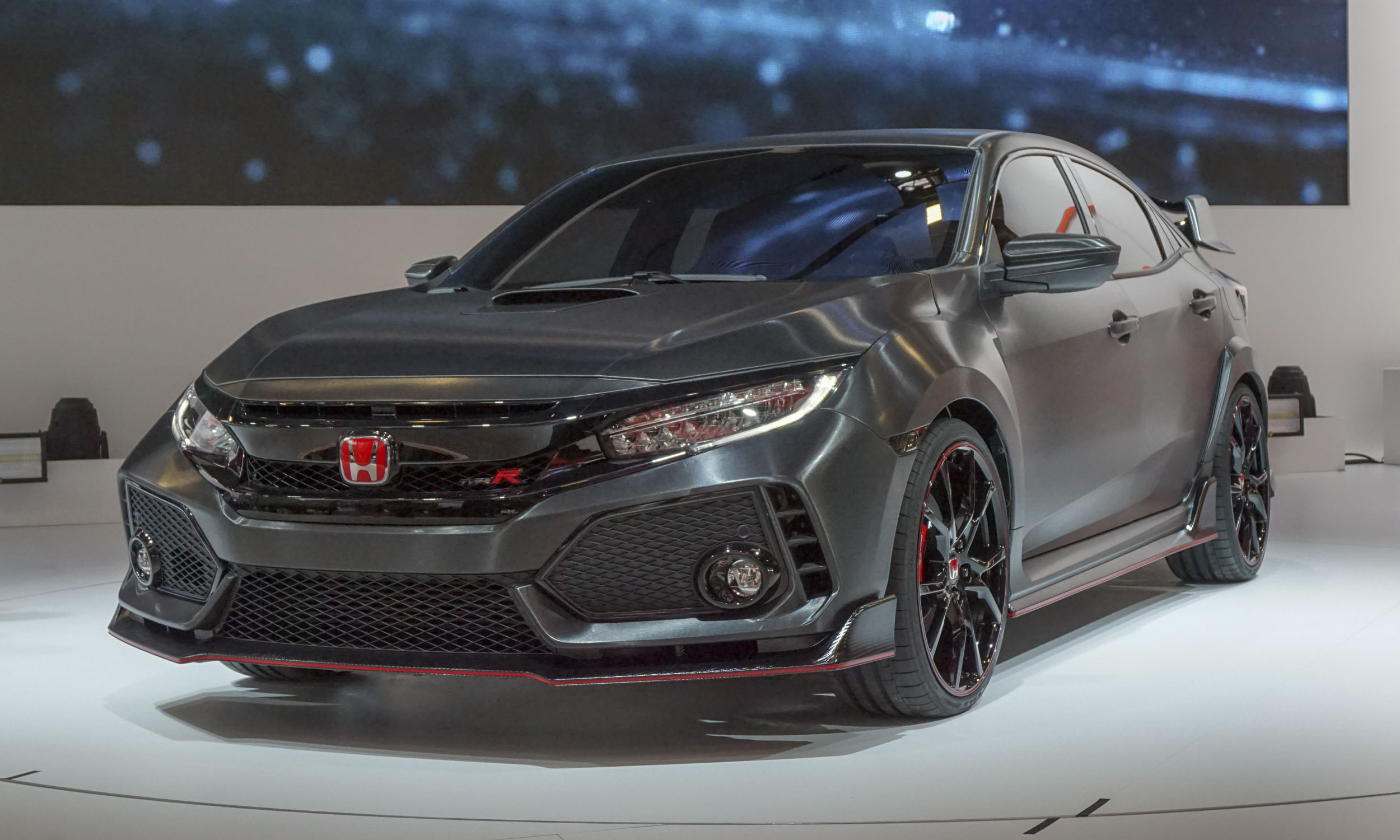 Honda Civic Type R Prototype
Civic fans will be dancing in the streets on hearing the news that the baddest Civic of them all is coming to America. In the past the Civic Type R has been sold overseas, but this latest-generation — showcased as a prototype in Paris — will be sold stateside. Based on the new Civic hatchback, the Type R Prototype looks downright mean with a black brushed-aluminum looking finish and carbon fiber trim. 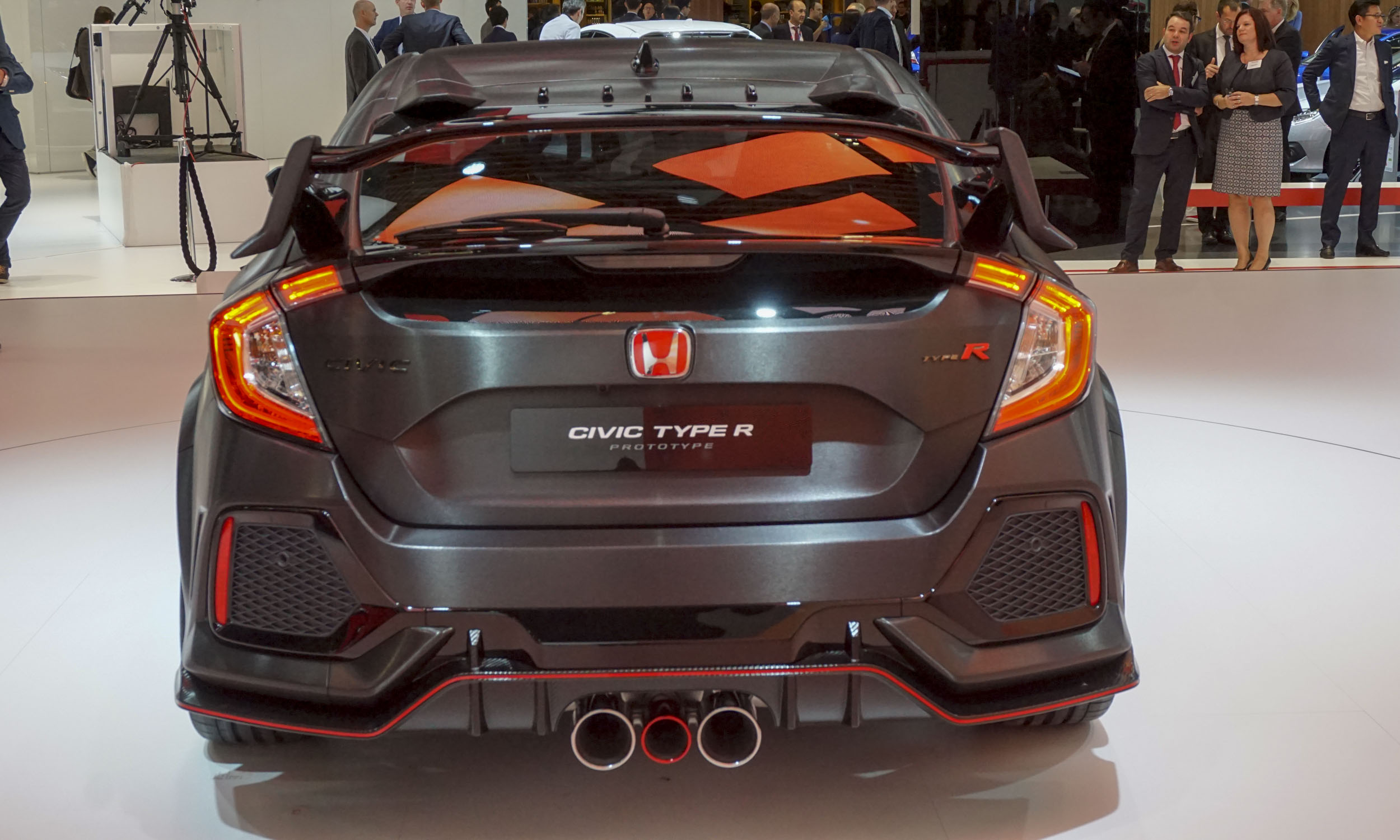 Honda Civic Type R Prototype
Lurking out back on the Civic Type R Prototype are a large rear spoiler and three exhaust outlets. The red badging is likely to be continued on the production version when it officially debuts sometime next year. Honda has not released any official stats about power, but some enthusiast publications are reporting more than 300 horses could be possible. More to come. 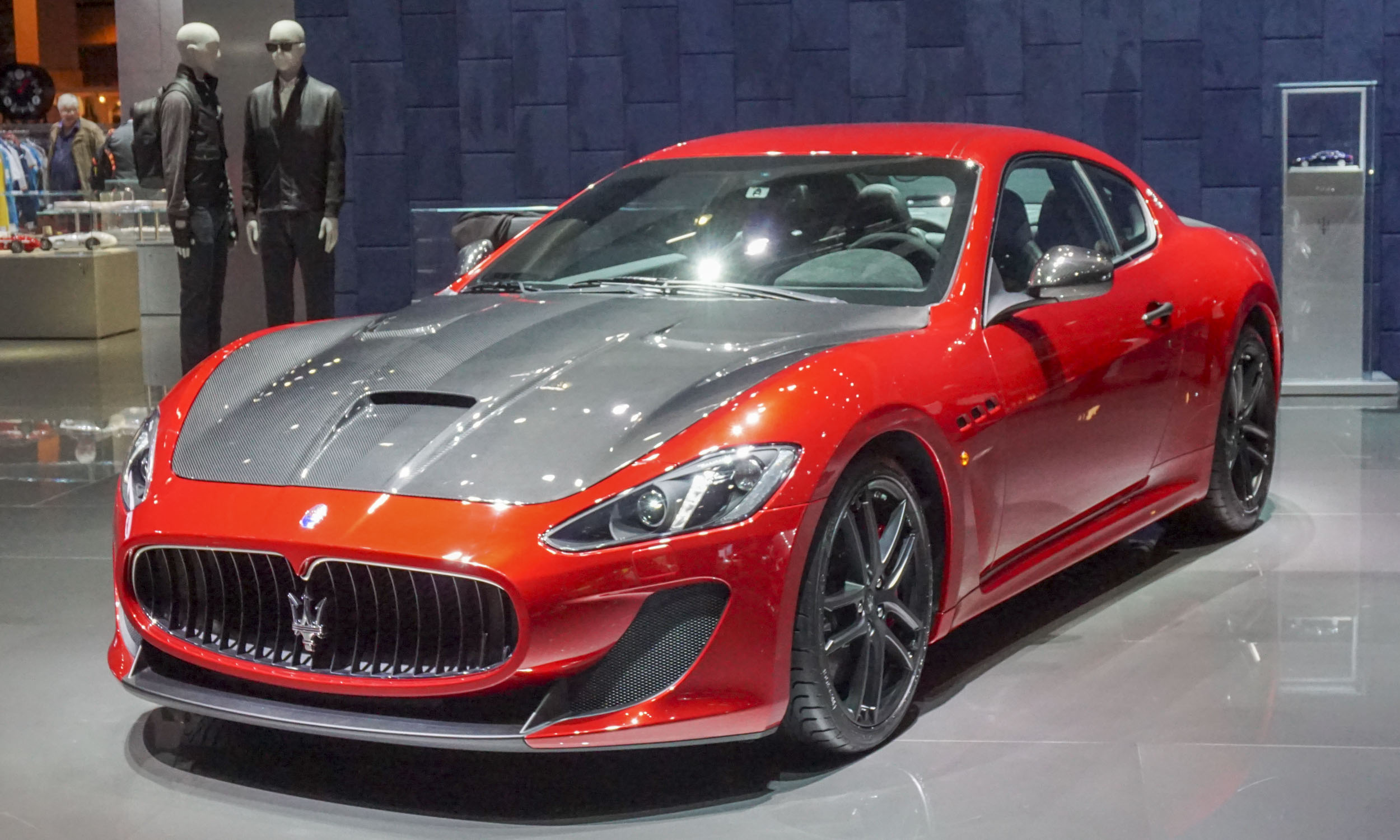 Maserati Gran Turismo MC Stradale
The Gran Turismo is an impressive package in any guise, but the ultimate version is this MC Stradale. Residing at the top of the Gran Turismo lineup, the MC Stradale is what Maserati considers a street version of the company’s Trofeo MC race car. The Stradale sports a Ferrari-built 4.7-liter V8 engine producing 460 horsepower as well as one of the best exhaust notes in the business. 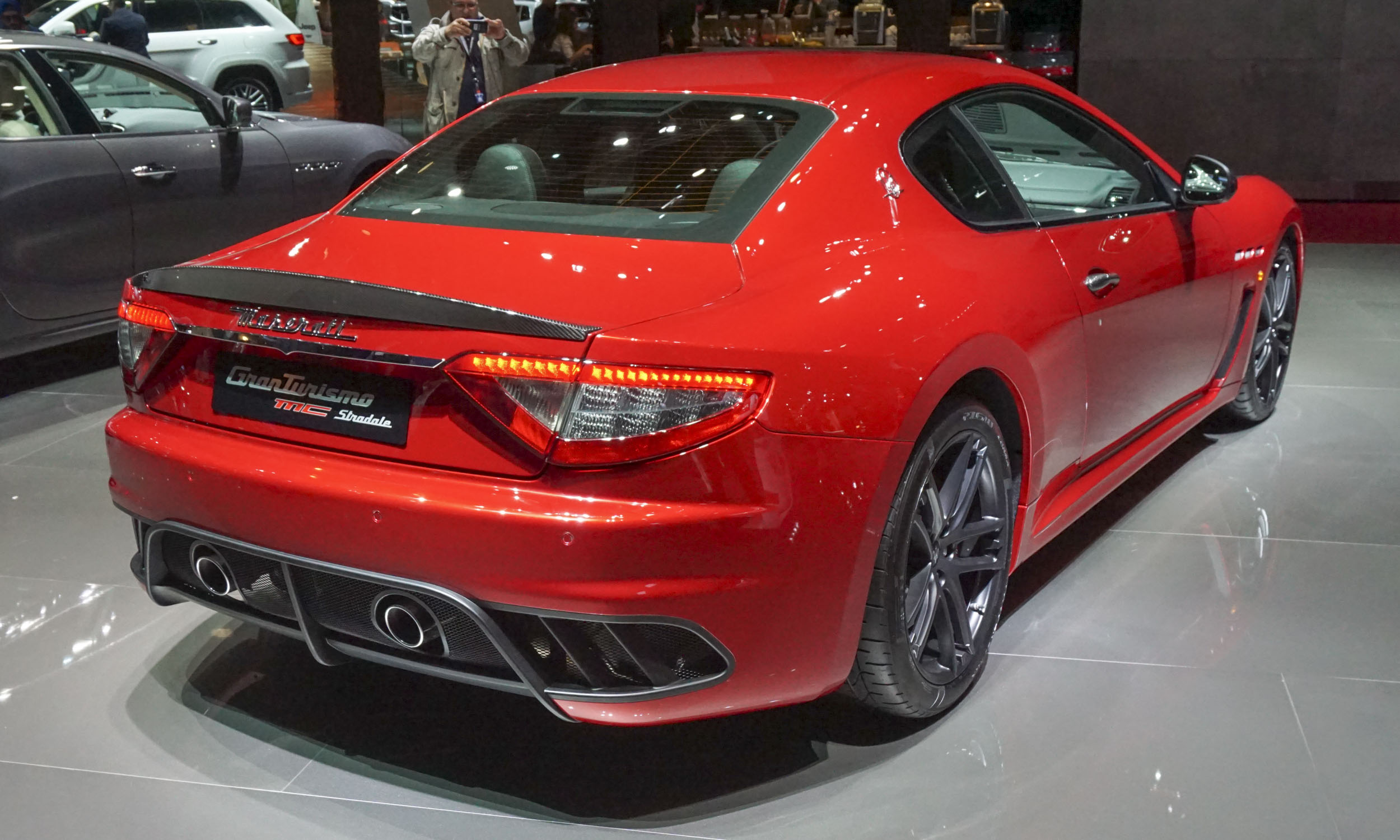 Maserati Gran Turismo MC Stradale
With a quick-shifting 6-speed automatic gearbox, the MC Stradale can reach 60 mph in less than 4.5 seconds. Stradale also stands out from the standard Gran Turismo with a unique nose, matte-black grille, red accents and a carbon fiber bonnet (or hood, as we prefer to call it in America). 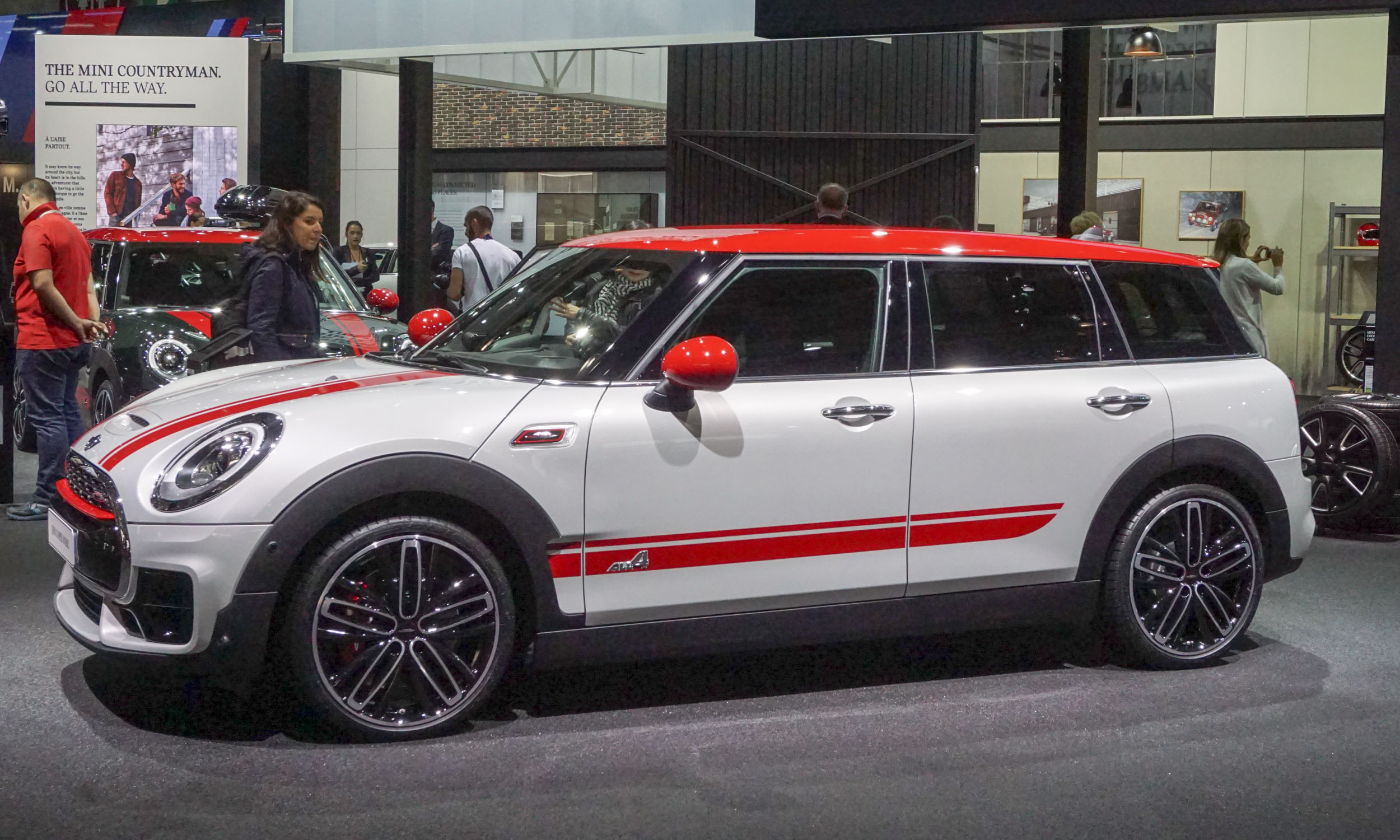 MINI Clubman JCW
A big MINI seems like a contradiction in terms, but the Clubman 4-door is indeed a big MINI. At this year’s Paris show, MINI introduced the high-performance version of the Clubman — the John Cooper Works edition. The latest in a line of JCW models, the Clubman JCW is motivated by a 2.0-liter TwinPower Turbo engine putting out 230 horsepower — the most grunt ever in a production MINI. 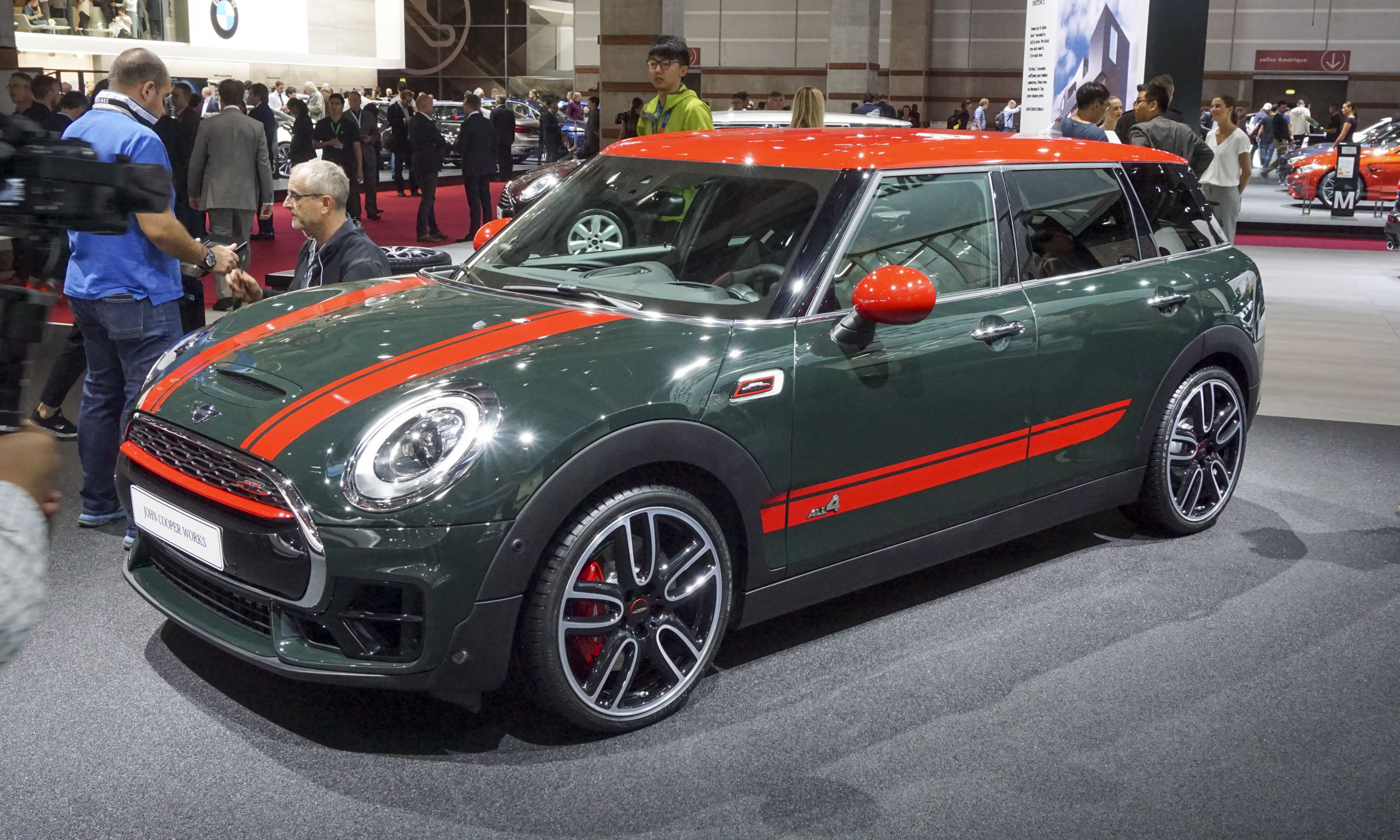 MINI Clubman JCW
To help manage that power, the Clubman JCW comes standard with MINI’s ALL4 all-wheel-drive system as well as unique suspension components, Brembo sport brakes and 18-inch light-alloy wheels. The JCW can be equipped with either a 6-speed manual or 8-speed Steptronic automatic transmission. 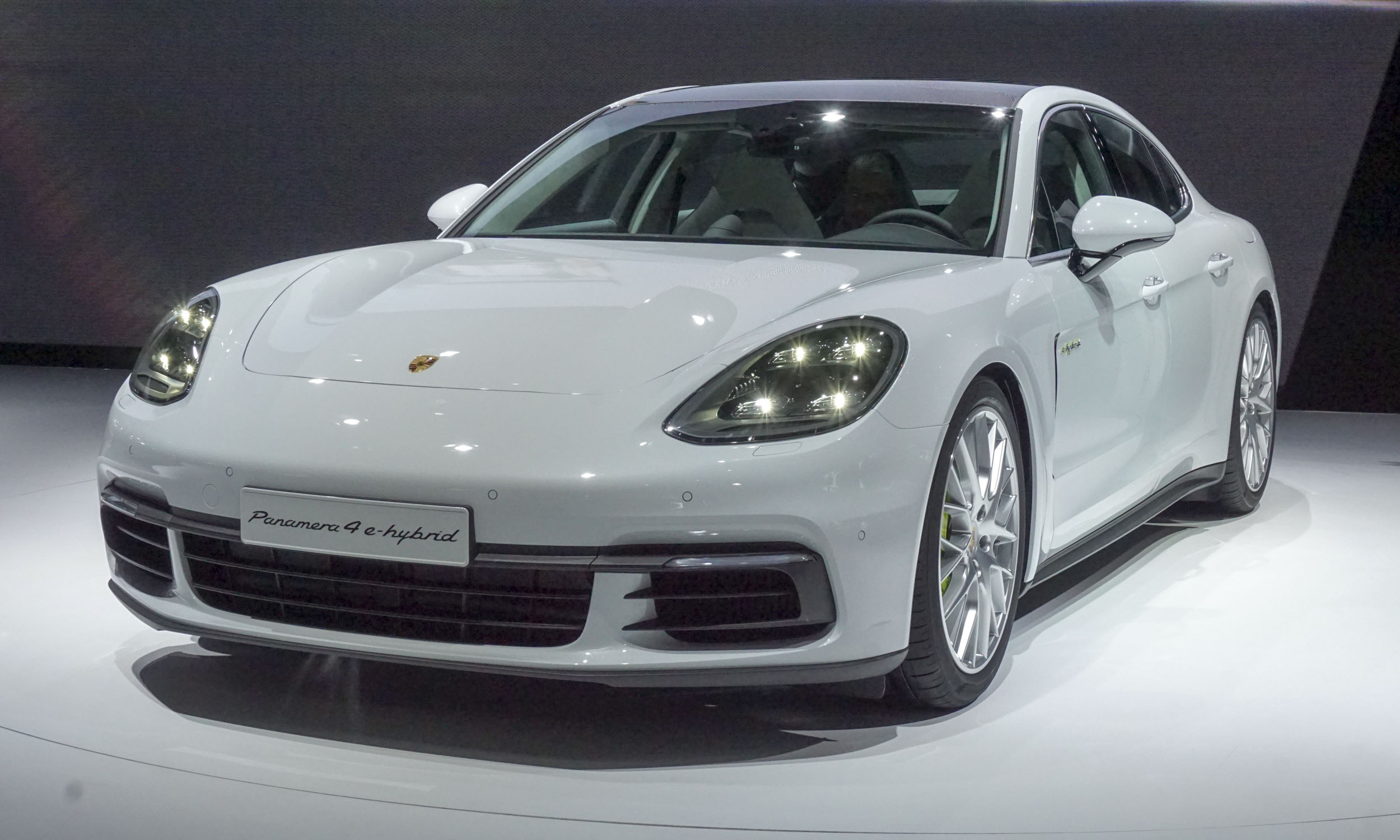 Porsche Panamera 4 E-Hybrid
This past summer Porsche launched the all-new 2017 Panamera. The German car company chose the Paris Motor Show to introduce the latest variant in the Panamera line: the Panamera 4 E-Hybrid. The plug-in hybrid uses a new 2.9-liter biturbo V6 engine teamed with an electric motor to produce a combined 462 horsepower. 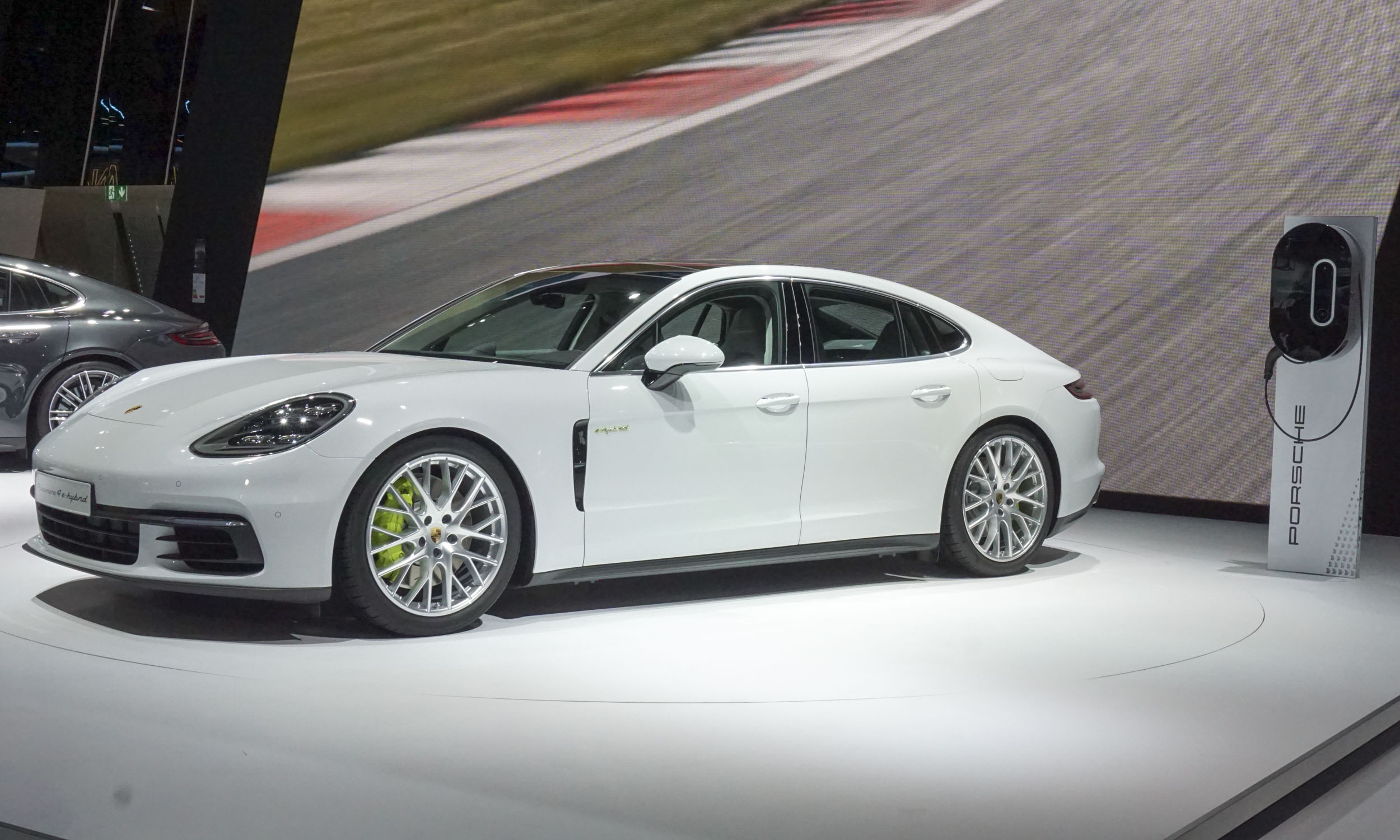 Porsche Panamera 4 E-Hybrid
Even more impressive is the 516 lb-ft of torque available almost instantly, allowing the big sedan to reach 62 mph in just 4.6 seconds. The E-Hybrid can also travel around 30 miles on electric power only. This is the fourth version of the Panamera to be introduced, joining the Turbo, 4S and 4S Diesel.