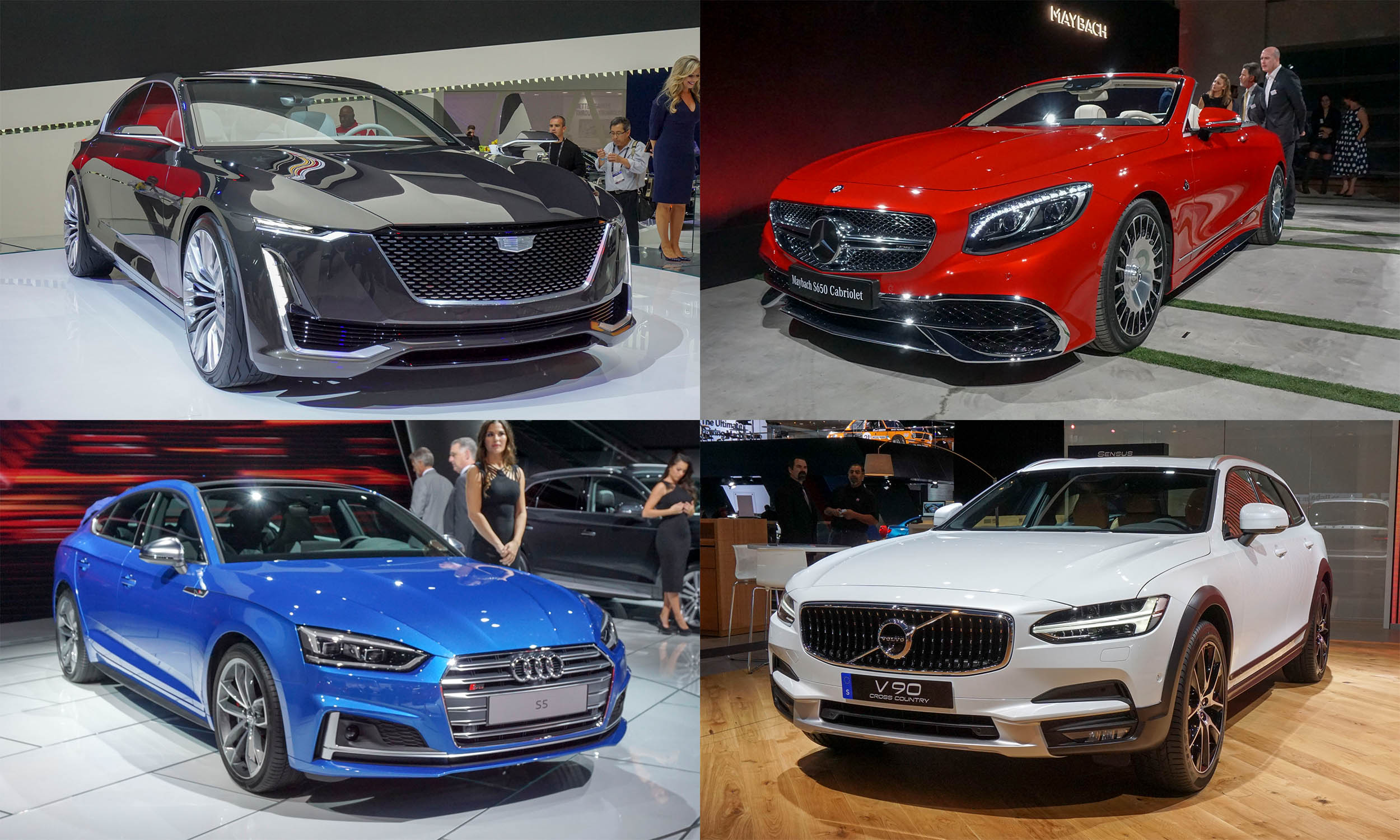 L.A. Luxury
Occurring every November, the Los Angeles Auto Show represents the start of an annual auto show season in the U.S. that continues through the following spring, with impending events in Detroit, Chicago and New York — among others. At the season’s first show, most car companies pull out all the stops in L.A. to reveal their latest lavish offerings. Many of the new models are world premieres that will be rolling into showrooms in the next six months, while others are simply concepts that showcase future technology and design. Take a quick look at the luxury models premiering at the 2016 Los Angeles Auto Show. 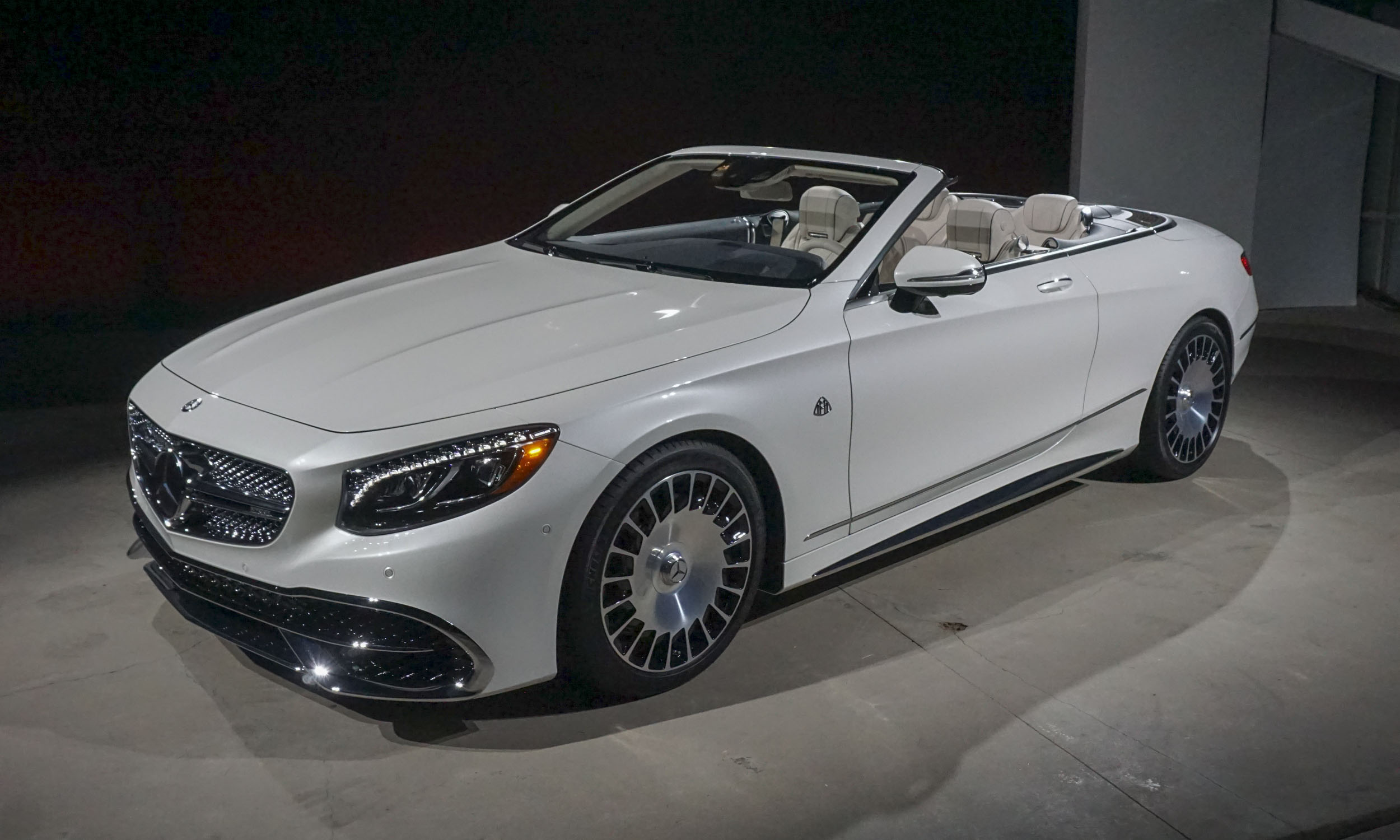 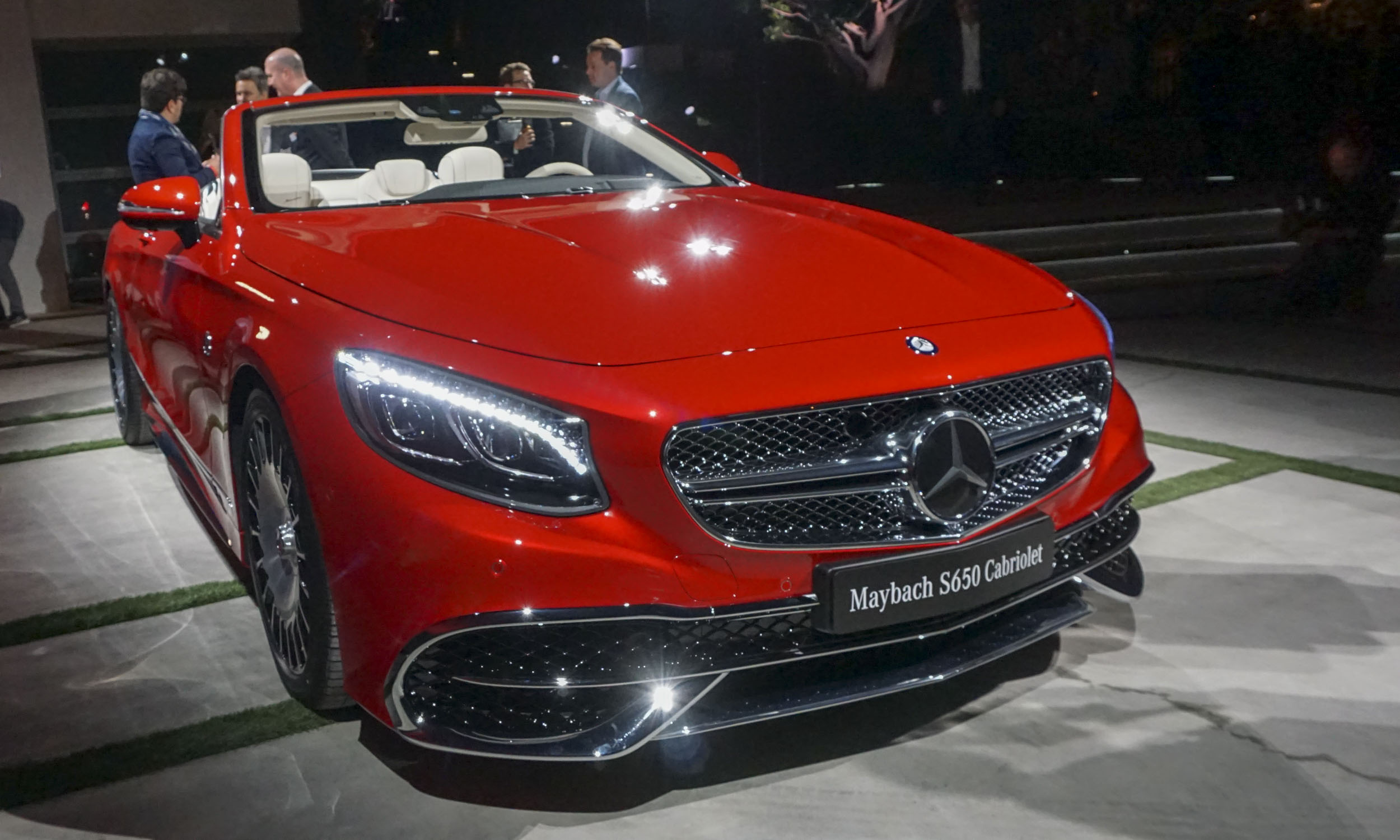 2018 Mercedes-Maybach S650 Cabriolet
Of course, the Maybach needs a powerplant befitting this luxury convertible, and Mercedes delivers with a 6.0-liter Biturbo V12 engine putting out 621 horsepower and a massive 738 lb-ft of torque. Power gets directed to the rear wheels via a 7G-Tronic 7-speed automatic transmission. Each Mercedes-Maybach S650 Cabriolet comes with a car cover made of high-quality fabric that matches the soft-top color, complete with diamond quilting and an embroidered Maybach emblem. One of the most noteworthy features is the “1 of 300” lettering on the cupholder cover, so those who see it may appreciate the exclusivity of this amazing ride. 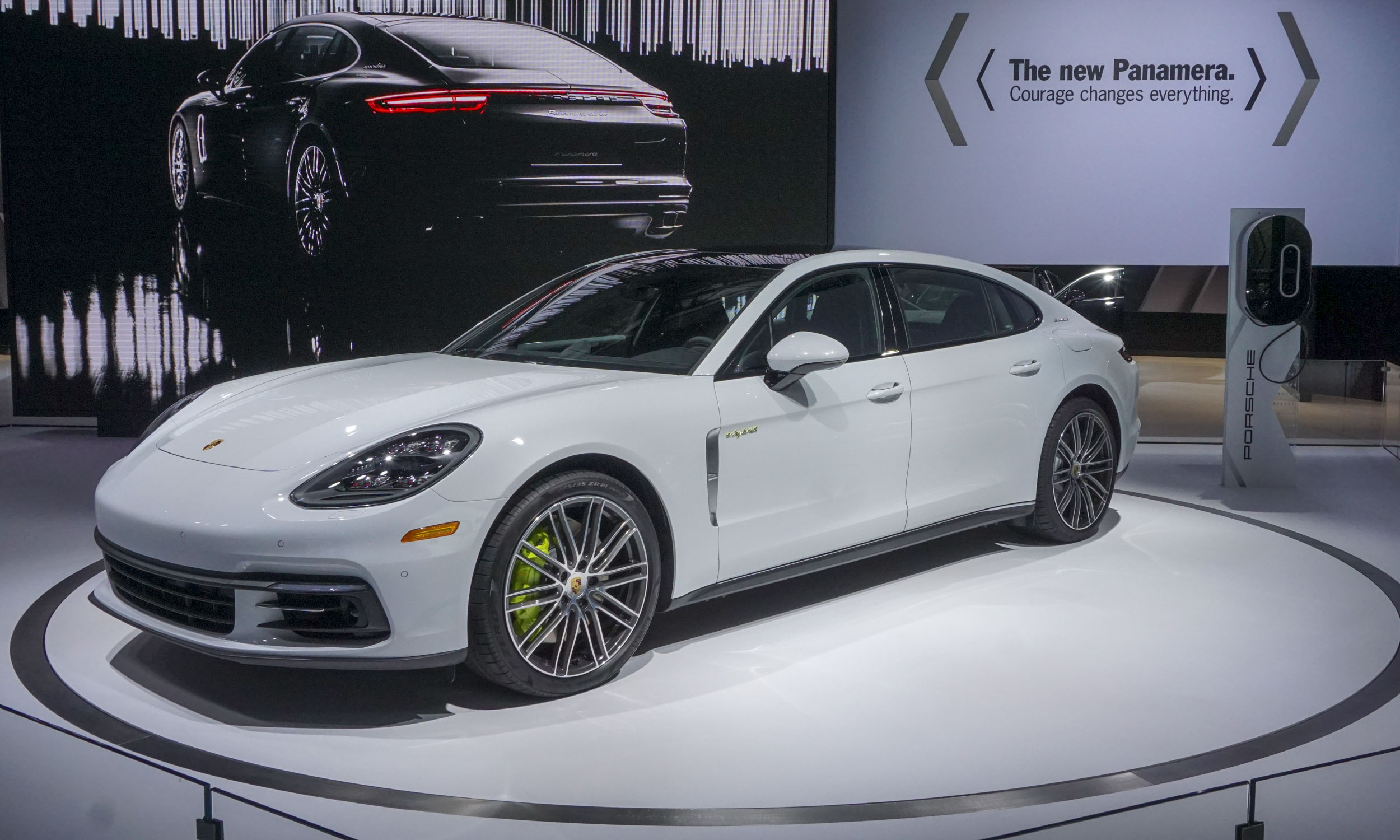 Porsche Panamera Executive
As one of the most potent high-performance sedans in America, this big German model now offers additional levels of luxury. The new Executive variants have a longer wheelbase for a roomier rear seat, as well as much higher equipment levels. The Panamera 4, 4S, Turbo and E-Hybrid are all available in Executive versions. Additional features of the Executive include a large panoramic roof, heated comfort seats with multi-way electrical adjustment in the front and rear, and an adaptive air suspension with an electronically-controlled damper system. 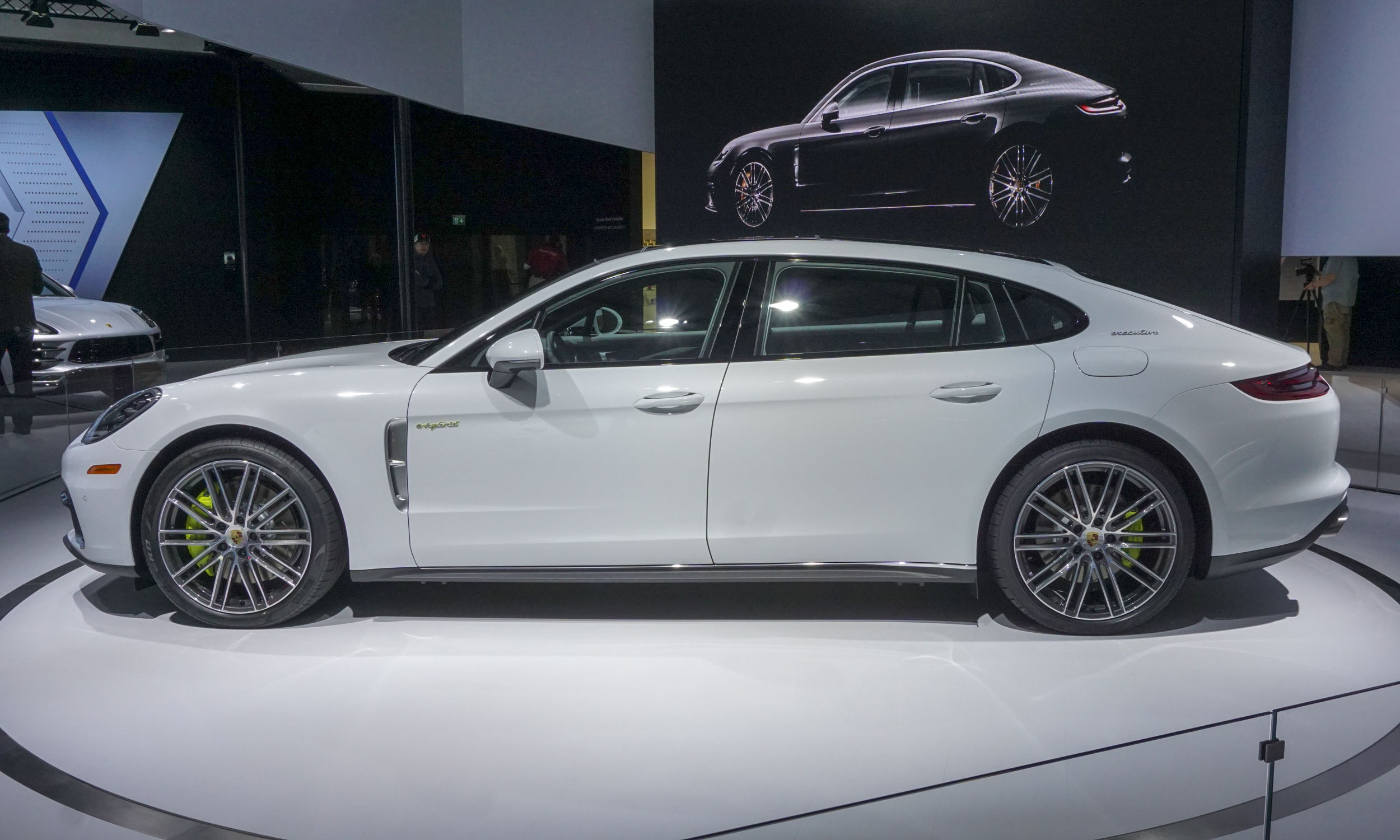 Porsche Panamera Executive
These new Executive iterations can be equipped with a newly-developed large rear center console that integrates the latest-generation Porsche Rear Seat Entertainment system. The 10.1-inch displays integrated within the backrests of the front seats are detachable for a variety of uses, making it possible to transform the rear seat of the Panamera into a digital workspace. The high-quality displays may also be used as tablets outside the vehicle. 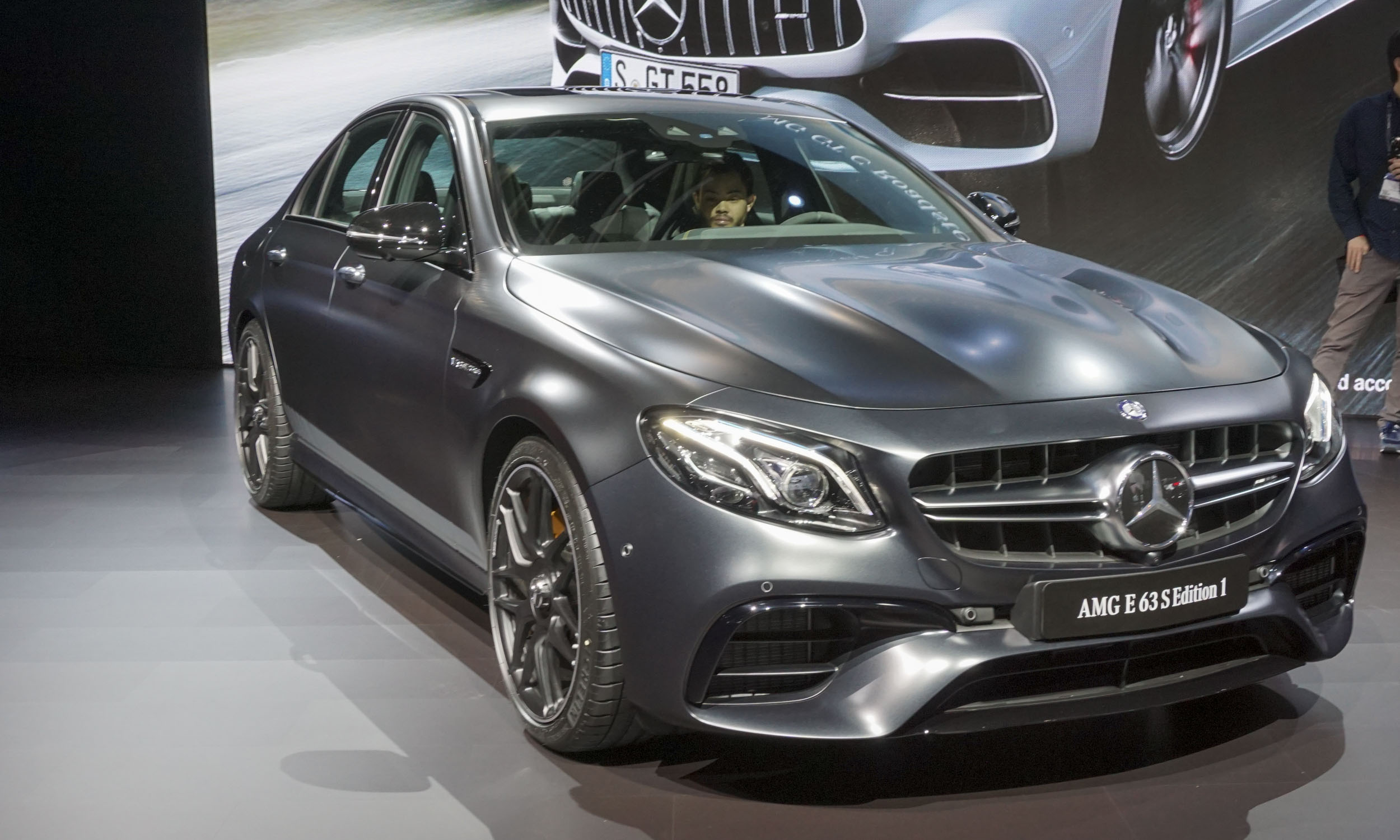 Mercedes-AMG E63 4MATIC+
The high-performance AMG lineup from Mercedes continues to grow. At this year’s L.A. show, the German car company introduced an all-new E63 sport sedan. “The new E63 models represent the biggest step forward we’ve ever taken from one generation to the next,” said Tobias Moers, chairman of the board of at Mercedes-AMG GmbH. Two variants are available: the Mercedes-AMG E63 4MATIC+ and the Mercedes-AMG E63 S 4MATIC+. The latter boasts a twin-turbo V8 engine putting out 612 horsepower, making this the most powerful E-Class ever. 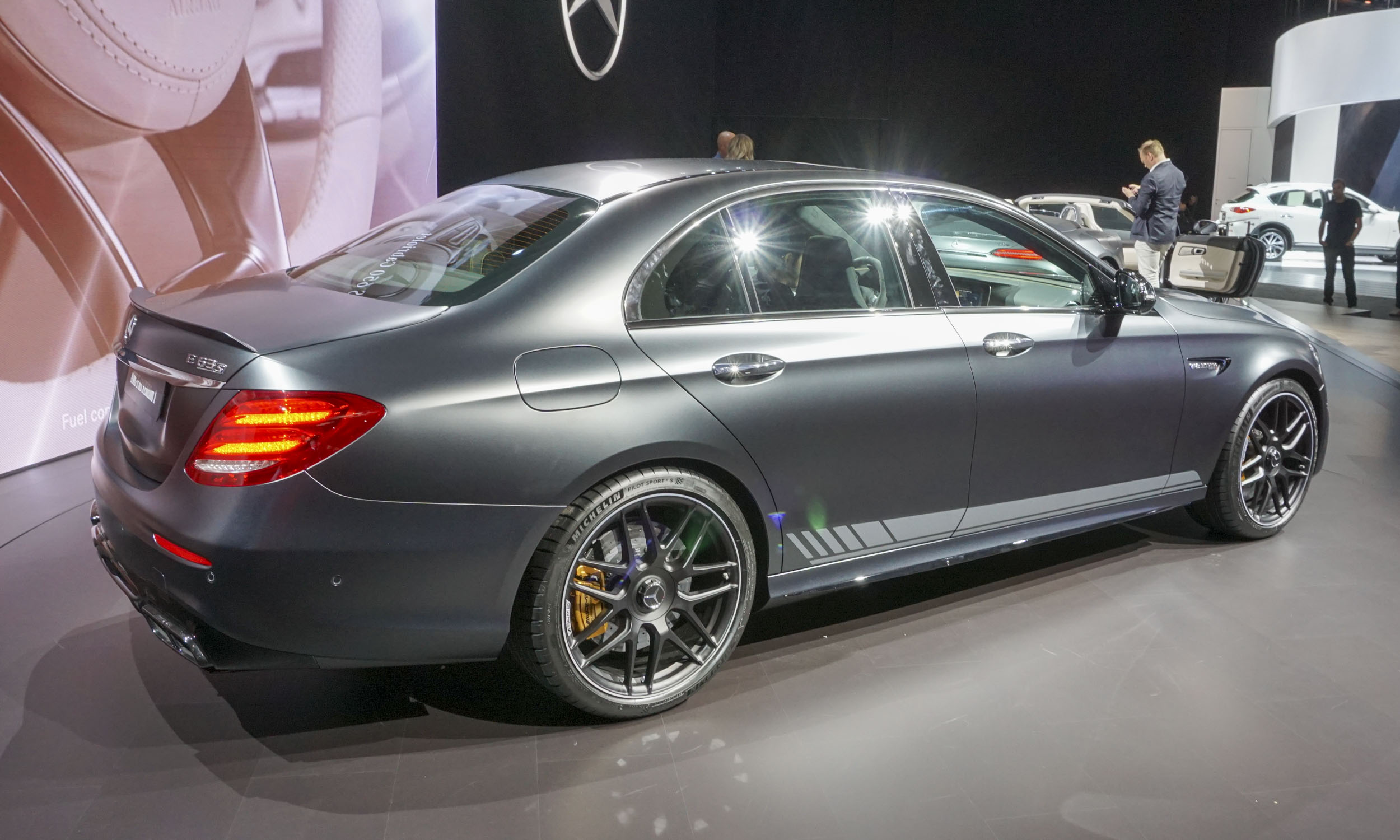 Mercedes-AMG E63 4MATIC+
All that power gets managed via the innovative AMG Performance 4MATIC+ all-wheel-drive system. Torque distribution from front to rear is completely variable, and on the ‘S’ variant an available Drift Mode permanently disengages the front axle, making this super sedan fully rear-wheel drive. Although capable of screaming down the road or track, this new AWD E63 keeps occupants comfortable and secure in front sport seats covered in black Nappa leather. Crystal-gray piping and the AMG crest in the headrests are an additional touch. 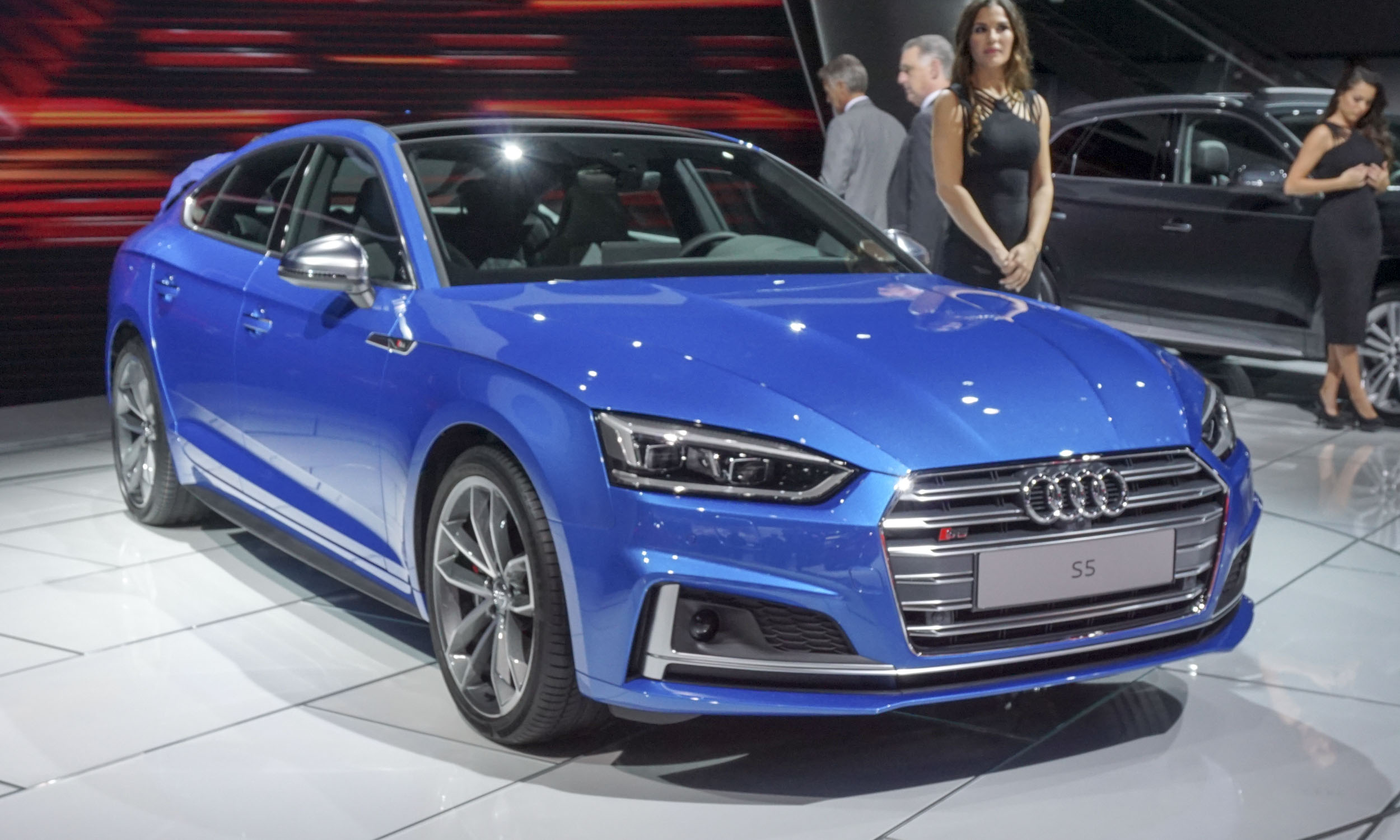 2018 Audi S5 Sportback
The S5 currently rolls on American roads as a luxurious sport coupe and cabriolet, but there’s a new variant arriving soon. Next spring the all-new Audi S5 Sportback follows in the tracks of the luxurious Audi S7, offering the luxury and performance of a proper sport sedan while adding the versatility of a rear hatch rather than a standard trunk. The S5’s styling reflects the coupe’s updated lines, including the flat Singleframe grille, longer and lower hoodline and more pronounced wheel arches. 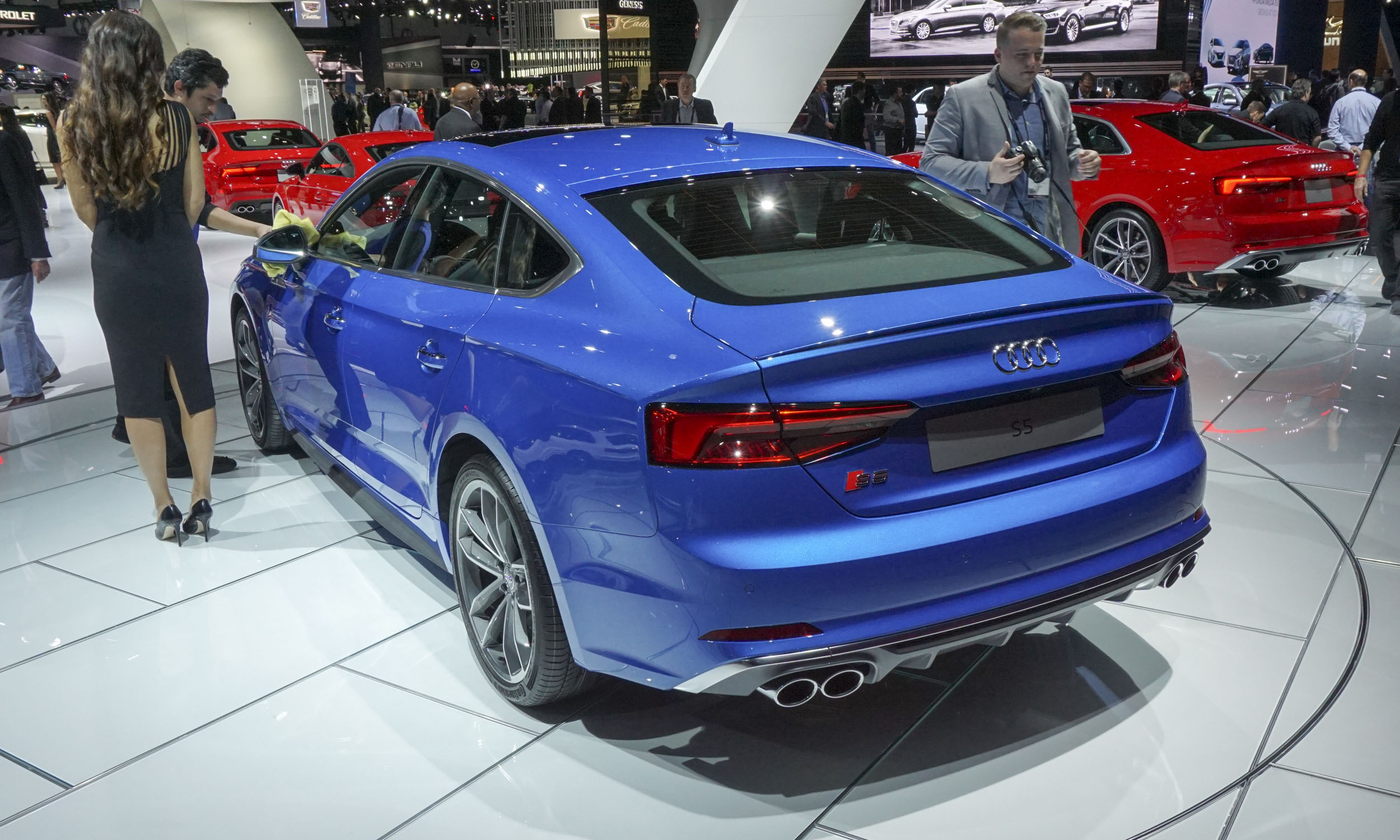 2018 Audi S5 Sportback
Make no mistake, the S5’s versatility in no way detracts from its sportiness — this hot hatch gets a newly-developed turbocharged V6 engine producing 354 horsepower. With Audi’s full-time quattro all-wheel-drive system, acceleration to 60 mph happens in just 4.5 seconds. With the S5, Audi creates a car to live with every day — and those would be great days behind the wheel. 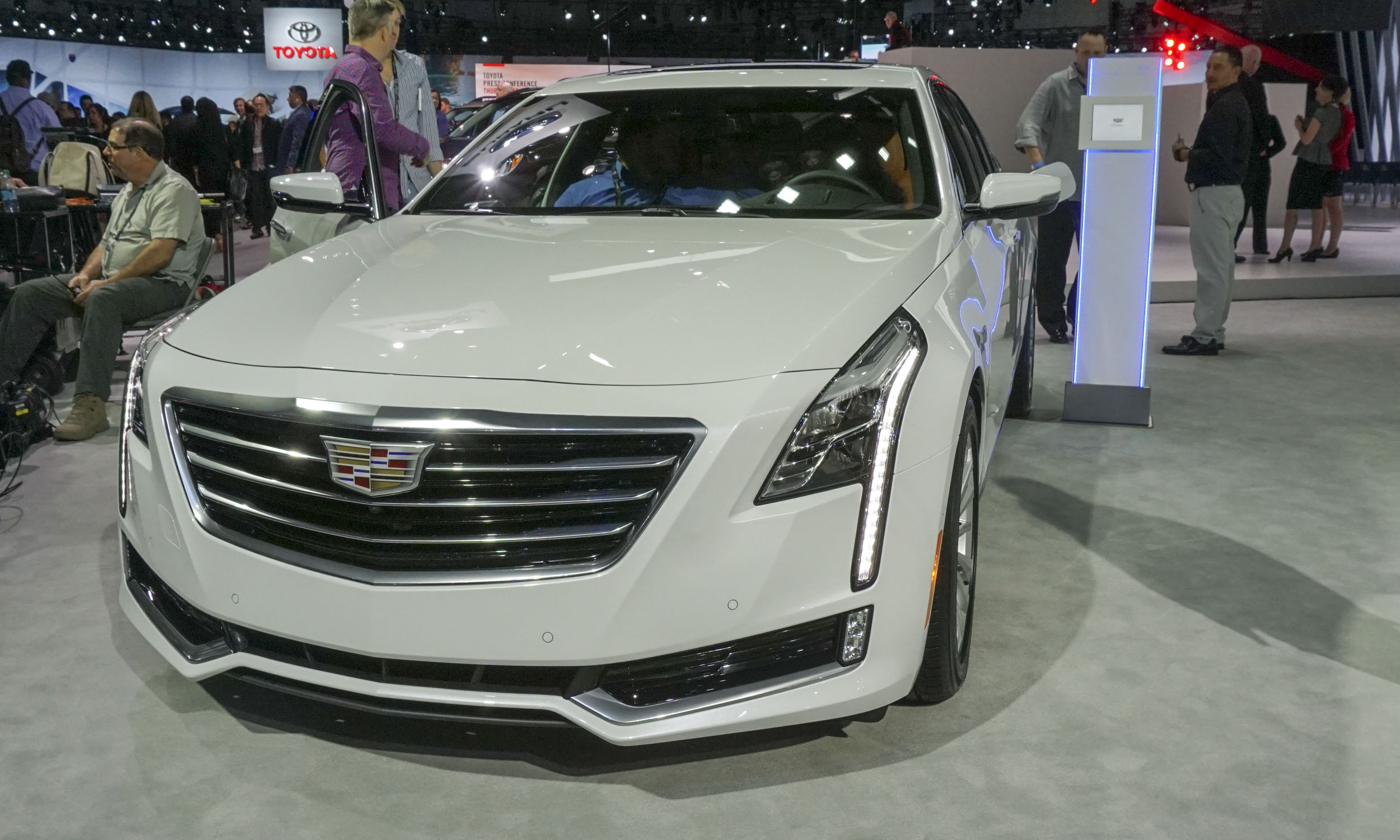 2017 Cadillac CT6 Plug-In Hybrid
Cadillac came to market last year with its all-new CT6 flagship sedan, and now the luxury brand is introducing a plug-in hybrid version of the big car. On sale next spring, the CT6 Plug-in Hybrid can travel up to 30 miles on electric power only, with a total range of around 400 miles. Fuel economy in electric mode is estimated at 65 MPGe. The hybrid system consists of a 2-motor electric variable transmission teamed with a turbocharged 2.0-liter engine creating a combined 335 horsepower and 432 lb-ft of torque. 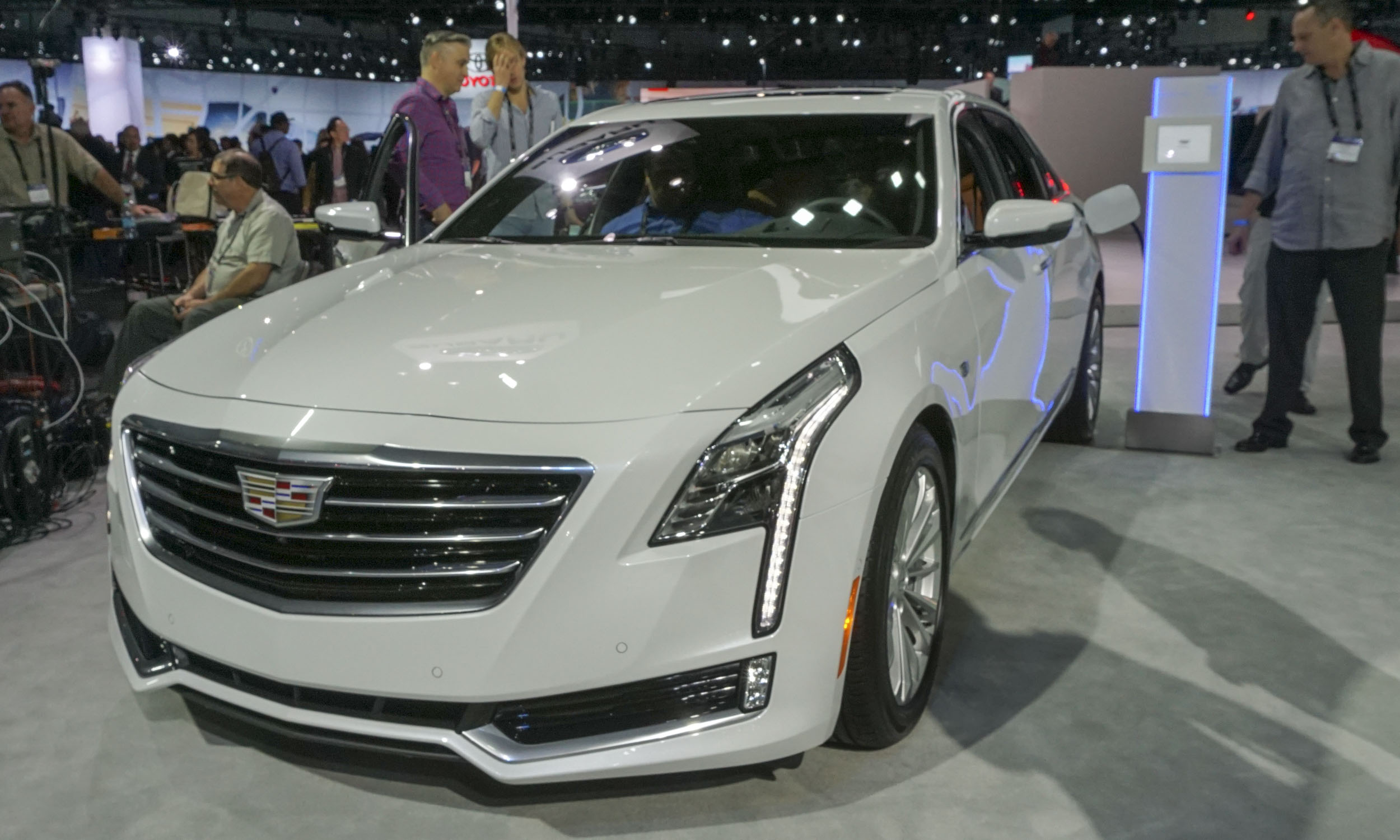 2017 Cadillac CT6 Plug-In Hybrid
The CT6 Plug-in Hybrid will offer a high level of luxury equipment on par with the current CT6 Premium Luxury trim. High-end features such as a rear-seat infotainment system, enhanced night vision and rear camera mirror are also standard on the hybrid. The plug-in hybrid will be priced at $75,095, making it the top-level trim in the CT6 lineup. 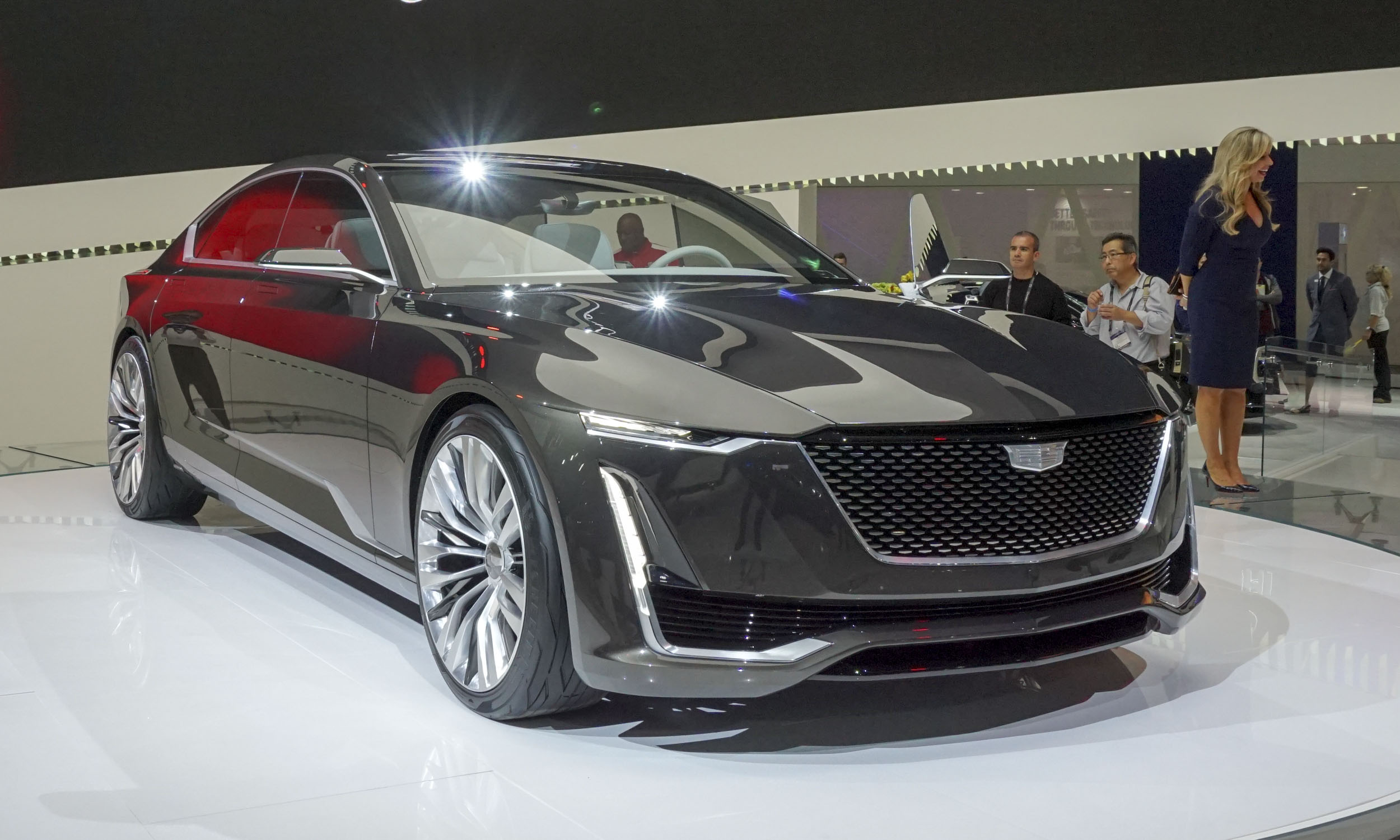 Cadillac Escala Concept
Debuting this past summer at the 2016 Pebble Beach Concours d’Elegance, the gorgeous Escala concept also graced the Cadillac display at the L.A. Auto Show. The Spanish word for “scale,” Escala suggests what a new flagship sedan from GM’s luxury marque might look like. The 4-door sedan is larger than the recently launched CT6 and features a liftback design similar to the Audi A7. In addition to showcasing a new face for Cadillac, the Escala’s interior highlights unique assembly techniques as well as advanced display screens and technology. 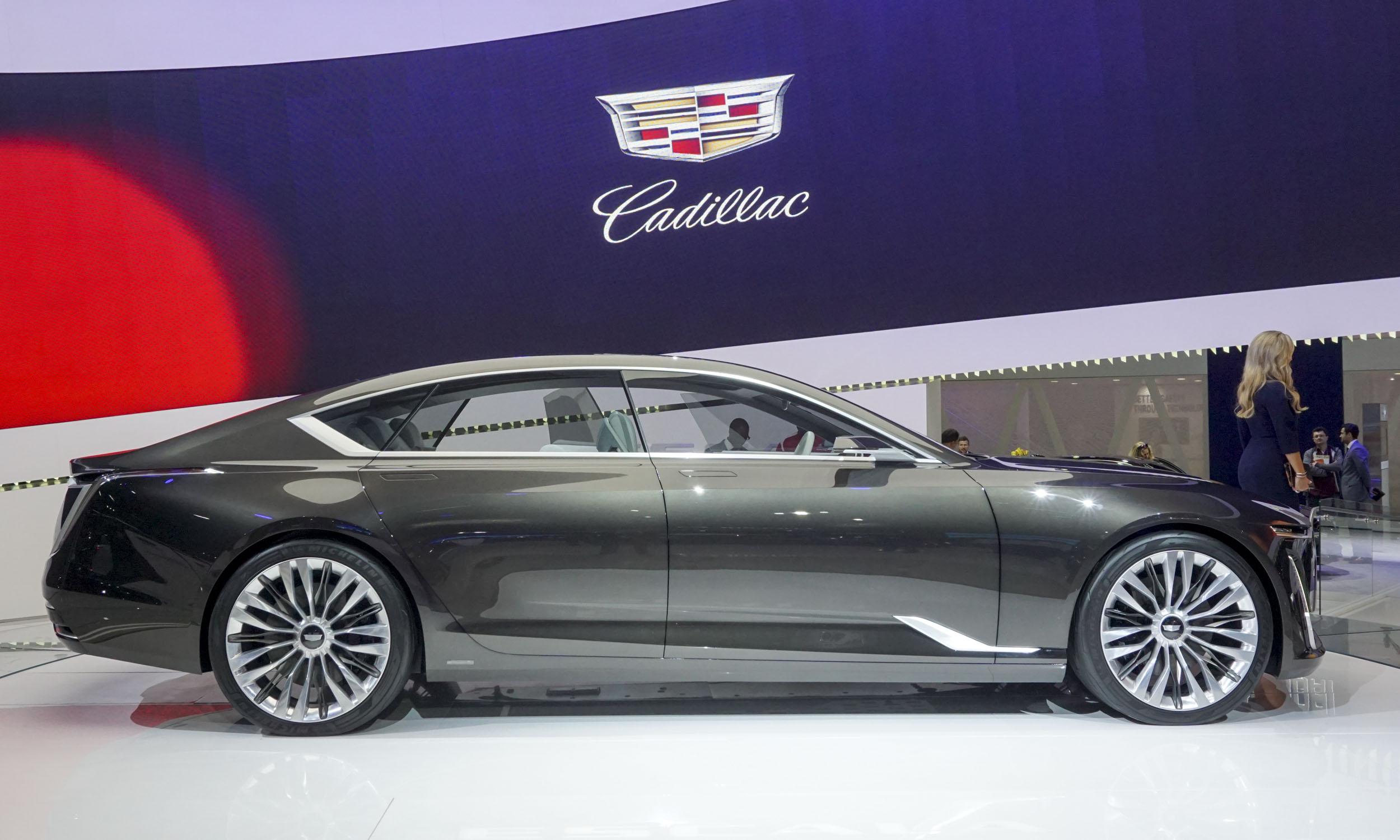 Cadillac Escala Concept
“Escala is a concept with two clear objectives,” said Johan de Nysschen, president of Cadillac. “First, Escala is a statement of intent for the next iteration of the Cadillac design language, and also technical concepts in development for future Cadillac models. Secondly, Escala builds Cadillac’s aspirational character, signaling the brand’s return to the pinnacle of premium.” Bold statements indeed. 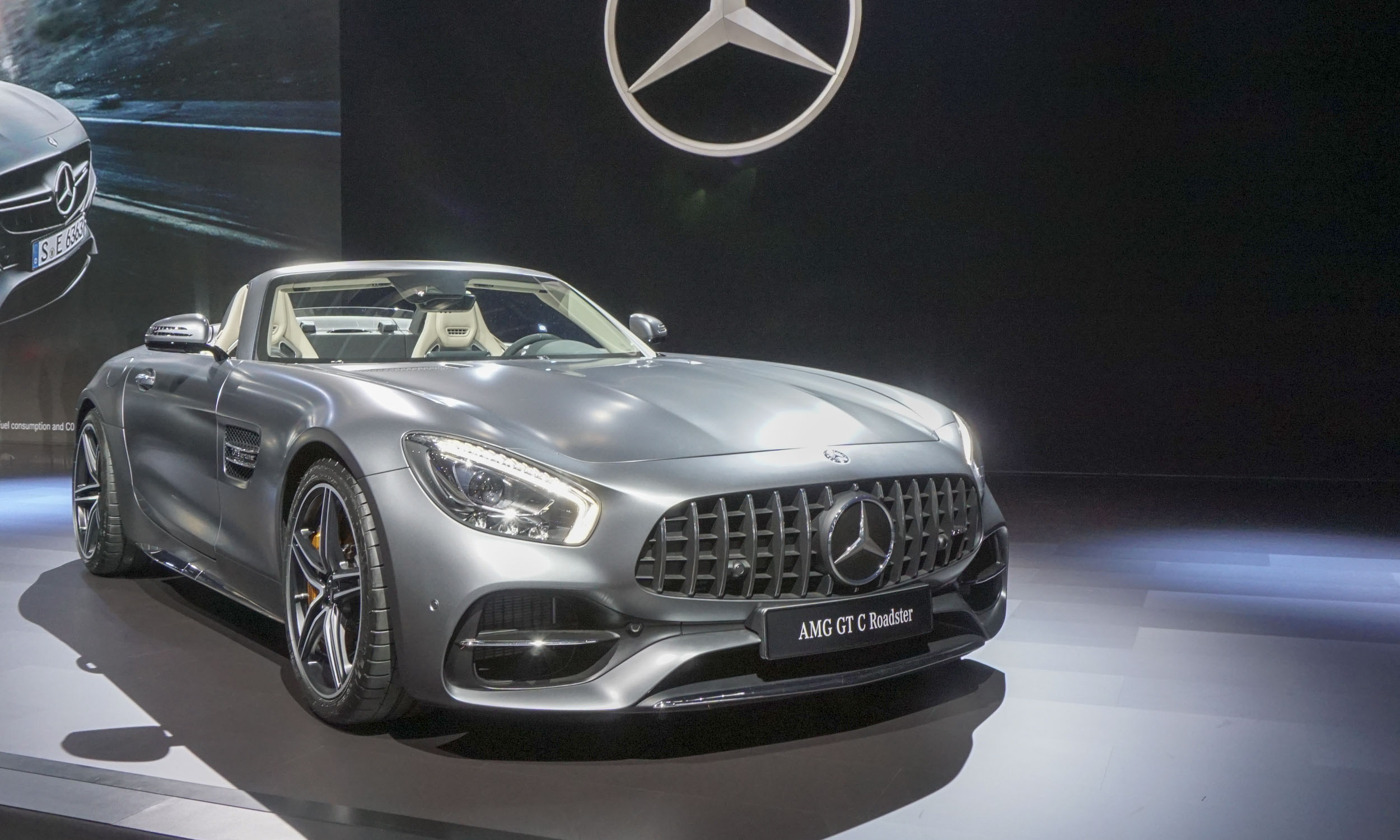 Mercedes-AMG GT C Roadster
Easily one of the most beautiful cars at the 2016 Los Angeles Auto Show, the Mercedes-AMG GT C Roadster is the latest high-performance convertible from Mercedes. Actually, Mercedes is adding two roadsters to the AMG lineup: the GT C in L.A. is the more powerful of the two. Under that long hood is a 4.0-liter twin-turbo V8 engine putting out 550 horsepower. Teamed with the AMG Speedshift 7-speed dual-clutch transmission, the GT C Roadster will hit 60 mph in just 3.7 seconds on its way to a top speed of almost 200 mph. 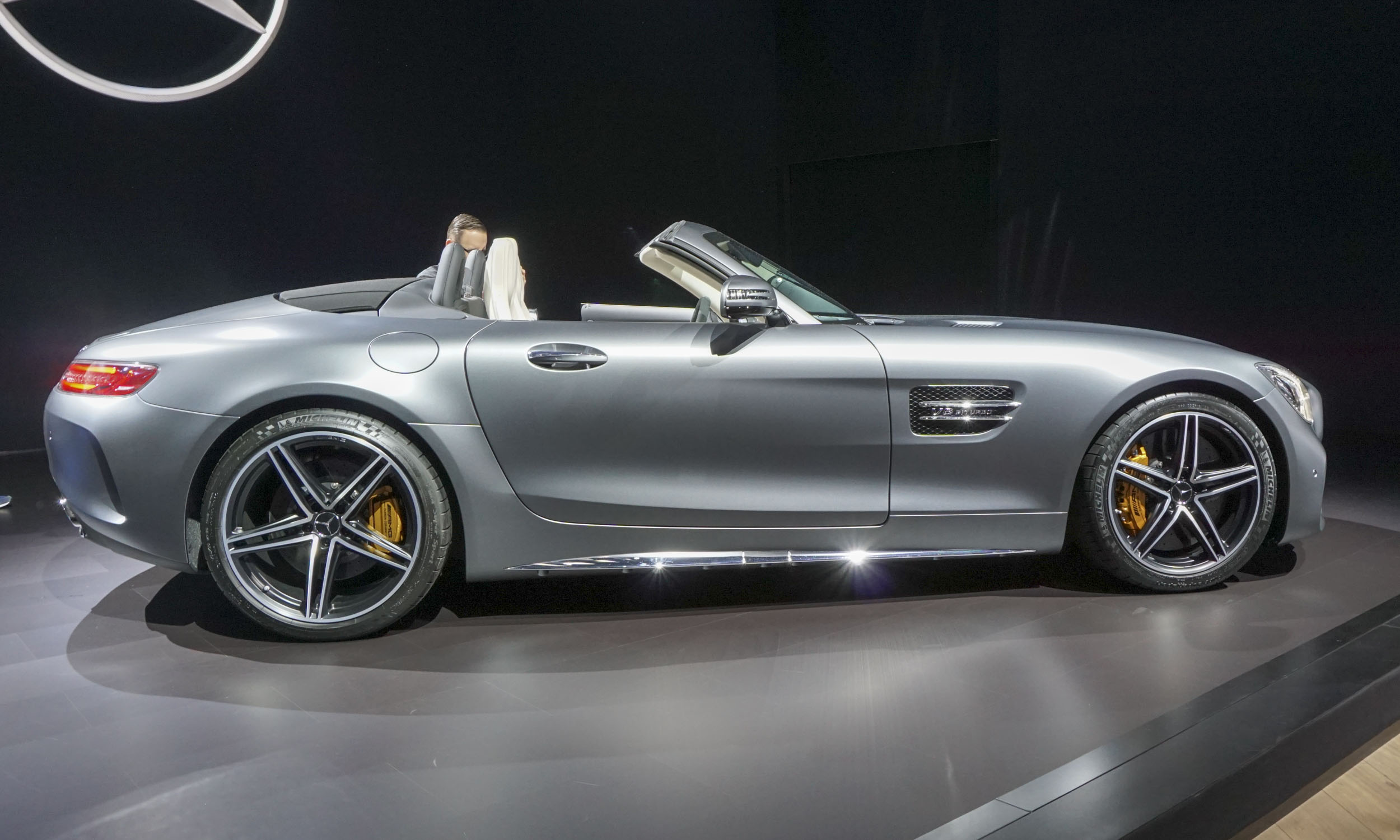 Mercedes-AMG GT C Roadster
The Mercedes-AMG GT C Roadster may be a high-performance sports car, but that doesn’t mean the interior is bare bones —in fact, it’s the opposite. The soft-top roadster is available with Nappa leather trim, heavily-contoured AMG performance seats that can be ventilated, and one of our favorite features: the AIRSCARF neck-level heating system. A Burmester High-End Sound System provides aural entertainment, but most drivers will prefer the music of the roaring exhaust. 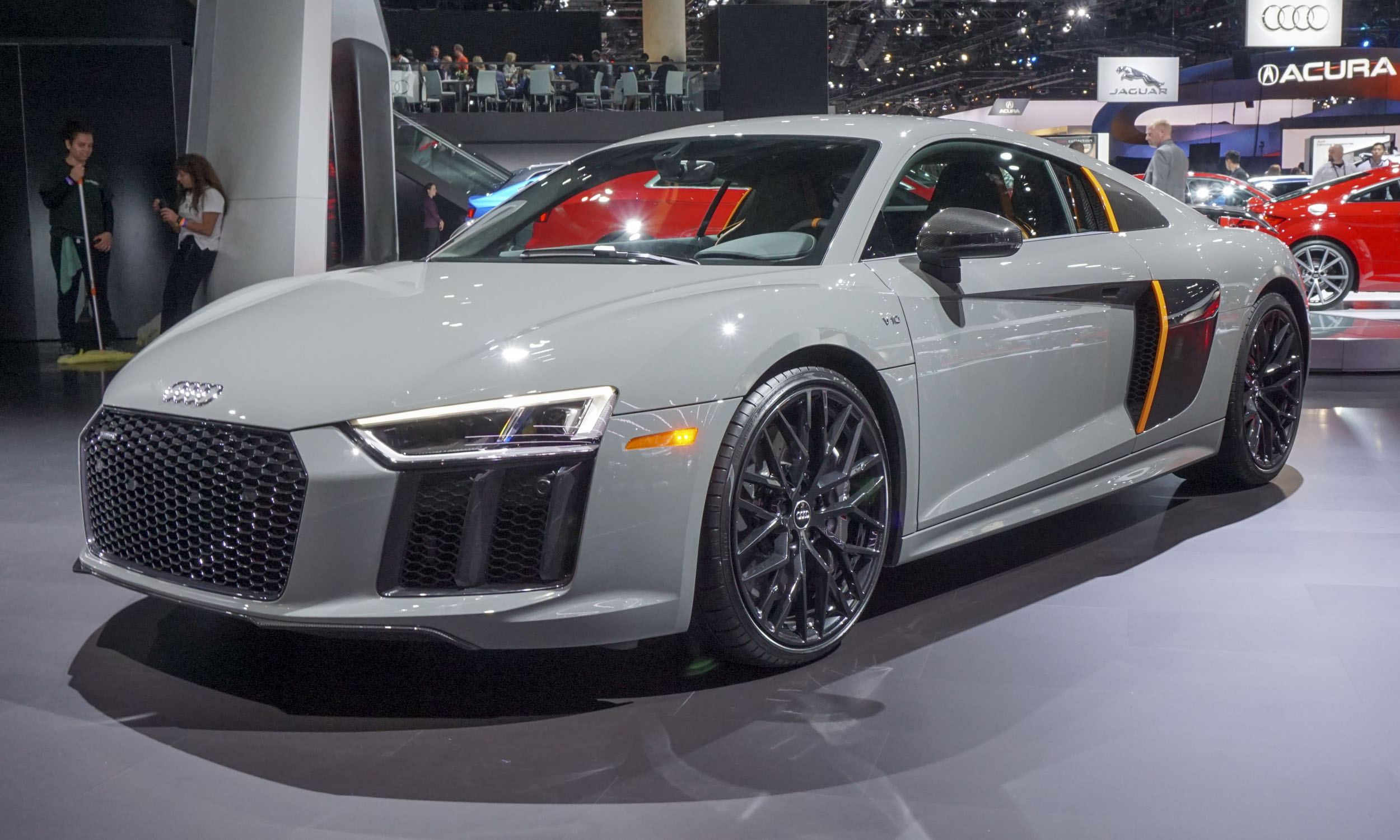 2017 Audi R8 V10 Plus Exclusive Edition
Who hasn’t dreamed of driving a car equipped with laser beams? Well, the exclusive 2017 Audi R8 V10 comes close. This special edition is the first car in America to feature laser headlights. Each headlight contains a laser module that operates with four high-intensity laser diodes. Each module bundles these diodes into a blue laser beam, then a phosphor converter transforms the blue laser beam into a very bright and pure white light. The laser beam pattern can only be activated at speeds about 40 mph, greatly enhancing nighttime visibility. 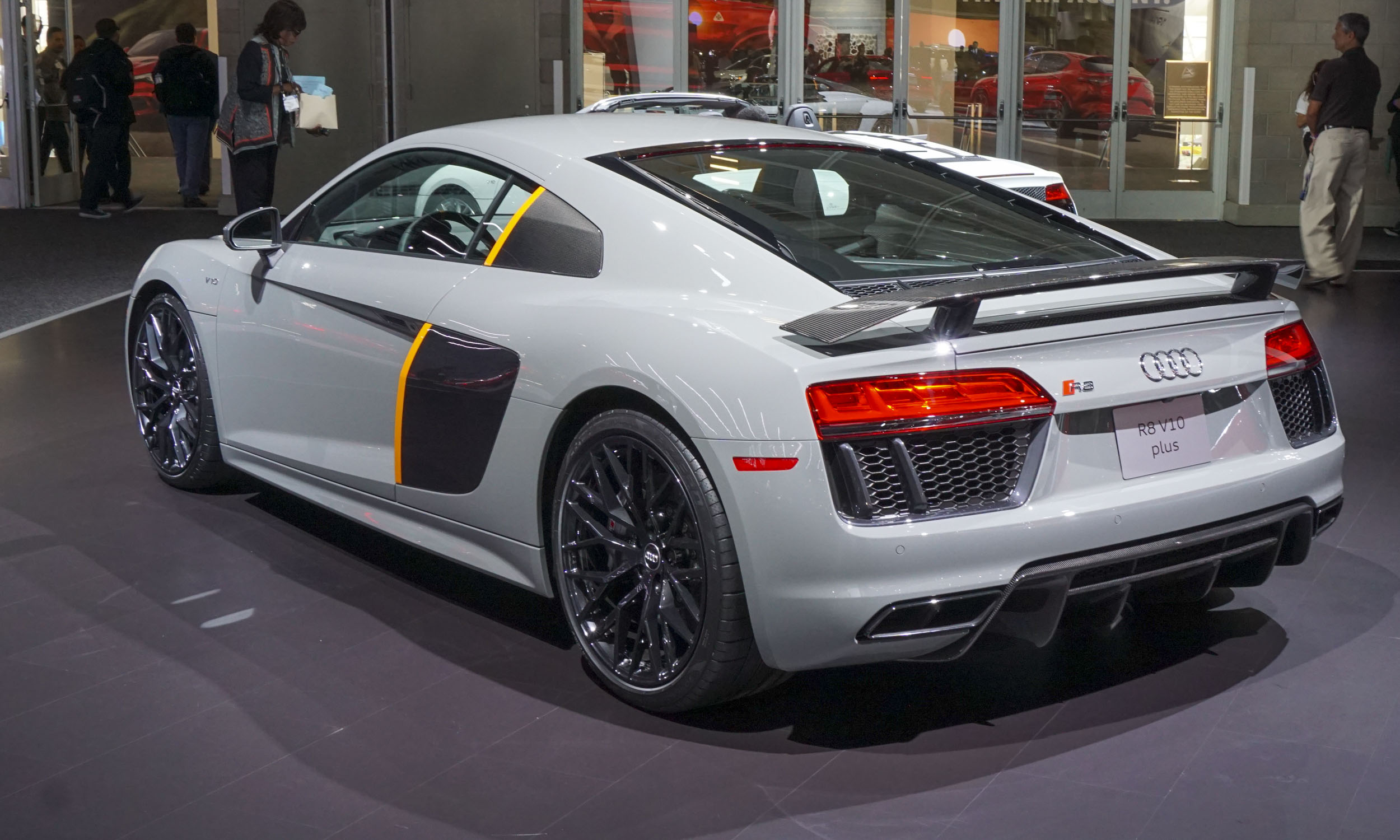 2017 Audi R8 V10 Plus Exclusive Edition
In addition to its unique lighting, this special R8 stands out with special Quantum Gray paint, Solar Orange trim, a carbon fiber rear diffuser, a fixed rear-wing spoiler and 20-inch wheels. The V10 Plus boasts a 5.2-liter V10 engine putting out 610 horsepower. Only 25 will be built with these configurations, priced at $229,200. 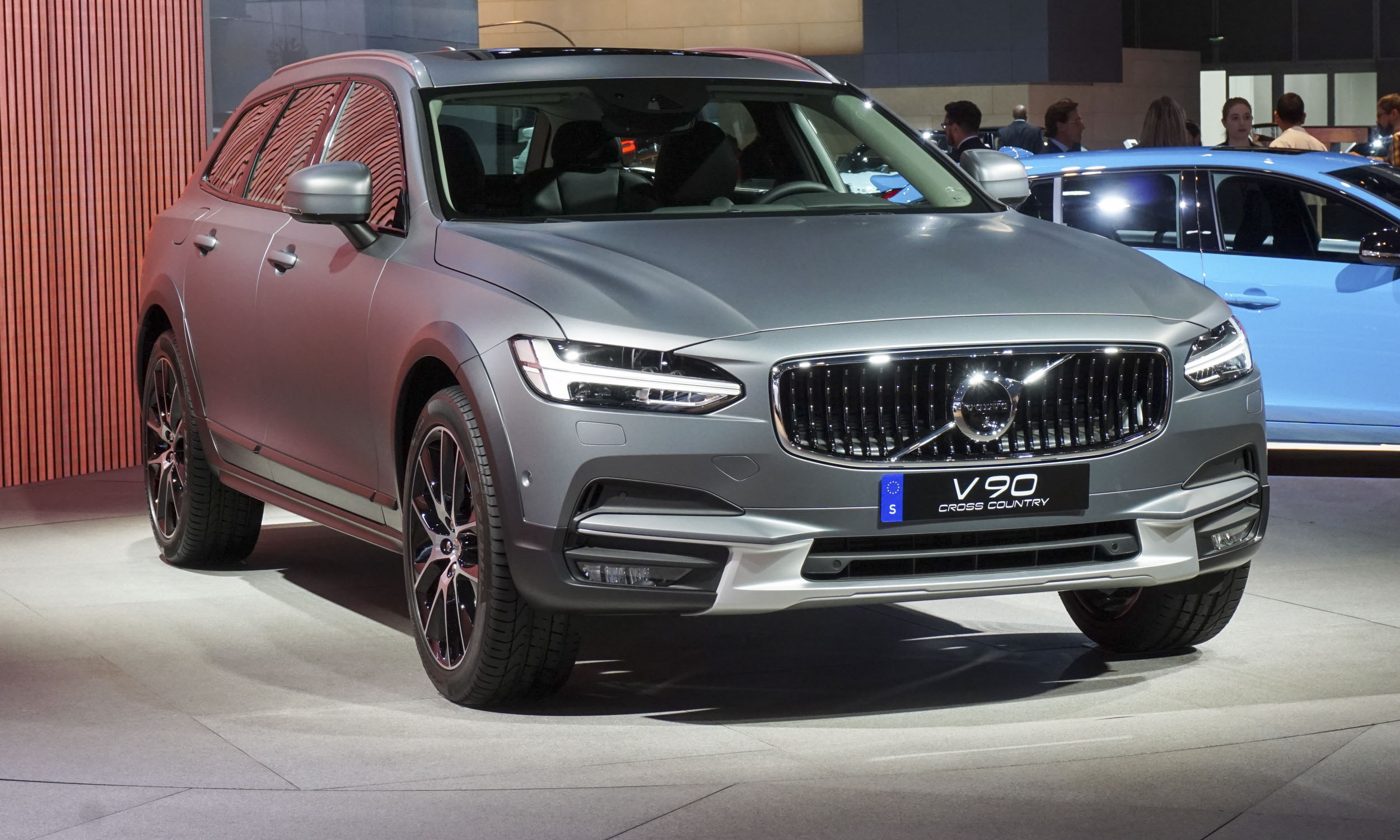 Volvo V90 Cross Country
Wagons haven’t been a favorite of the American car-buying public for quite a while, but this V90 Cross Country may be enough to sway some opinions. Considering its long hood and sleek lines, one could almost call this wagon sexy; at the same time, the raised ground clearance on the Cross Country adds a level of toughness. This exercise in duality works without losing the high level of luxe inside. 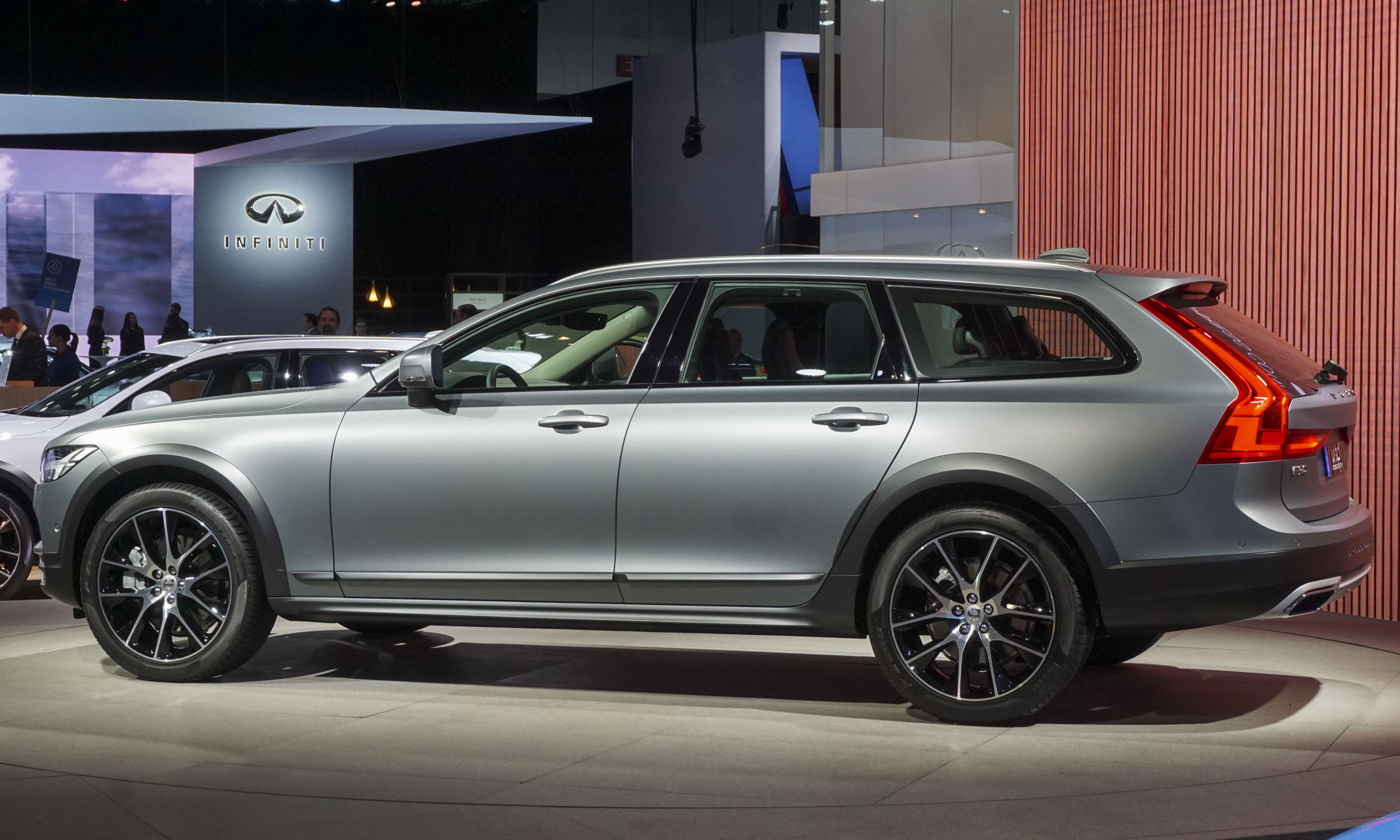 Volvo V90 Cross Country
“Our cars are well known for their safety, strength and durability. With all-wheel drive, increased ride height, and a chassis optimized for comfort and control in all weather and road conditions, the new V90 Cross Country takes our versatile V90 estate and adds the heart of an explorer,” said Dr. Peter Mertens, senior vice president of R&D at Volvo Cars. Look for the newest member of the Cross Country family to arrive early next year. 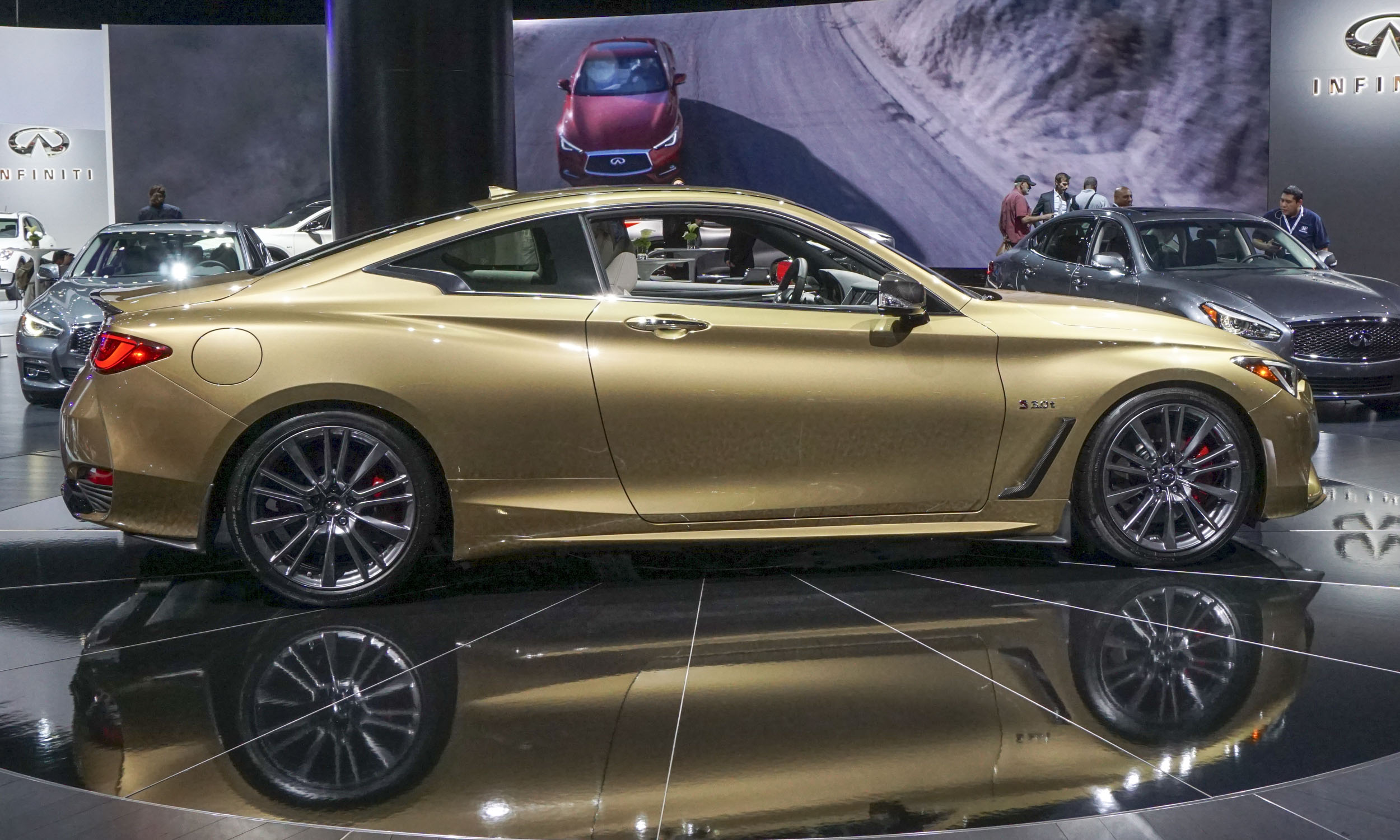 Infiniti Q60 Neiman Marcus Limited Edition
The holidays are advancing at a rapid rate, so if you haven’t found that perfect gift yet, perhaps a new car would be a good option. Available via the annual Neiman Marcus Christmas Book is the Infiniti Q60 Neiman Marcus Limited Edition (located on page 128). Based on the 400-horsepwer Q60 Red Sport 400, this special gift car will stand out with its Solar Mica paint and Gallery White semi-aniline leather-trimmed sports seats. 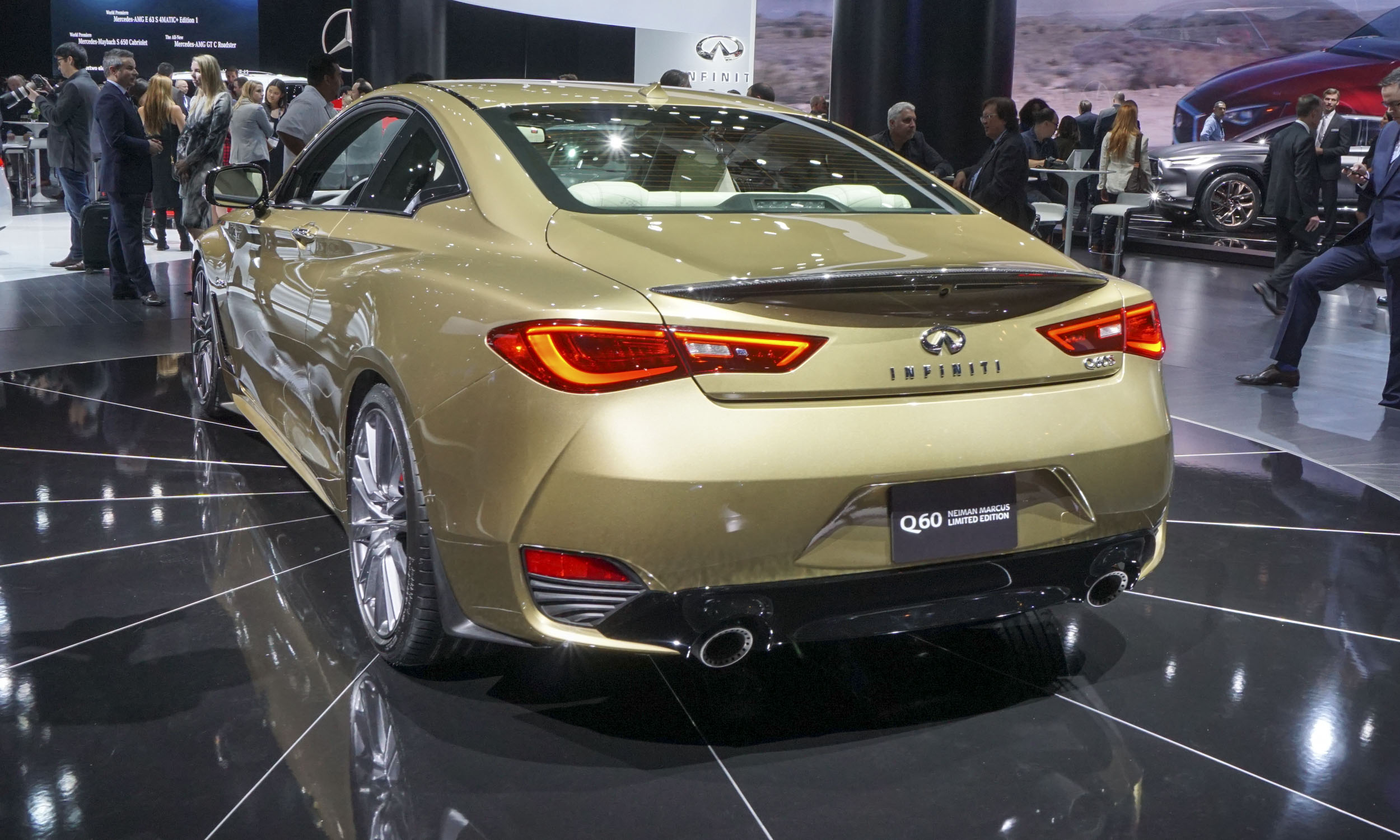 Infiniti Q60 Neiman Marcus Limited Edition
When you purchase this Q60 through the catalog, you get more than just the car. Priced at $63,000, the package includes an exclusive leather weekender bag that matches the interior leather, a plaque with the car’s VIN number, a Neiman Marcus-branded indoor car cover and a letter of authenticity. Infiniti also pledges to donate $1,000 to the Heart of Neiman Marcus Foundation for each of these special-edition vehicles sold. 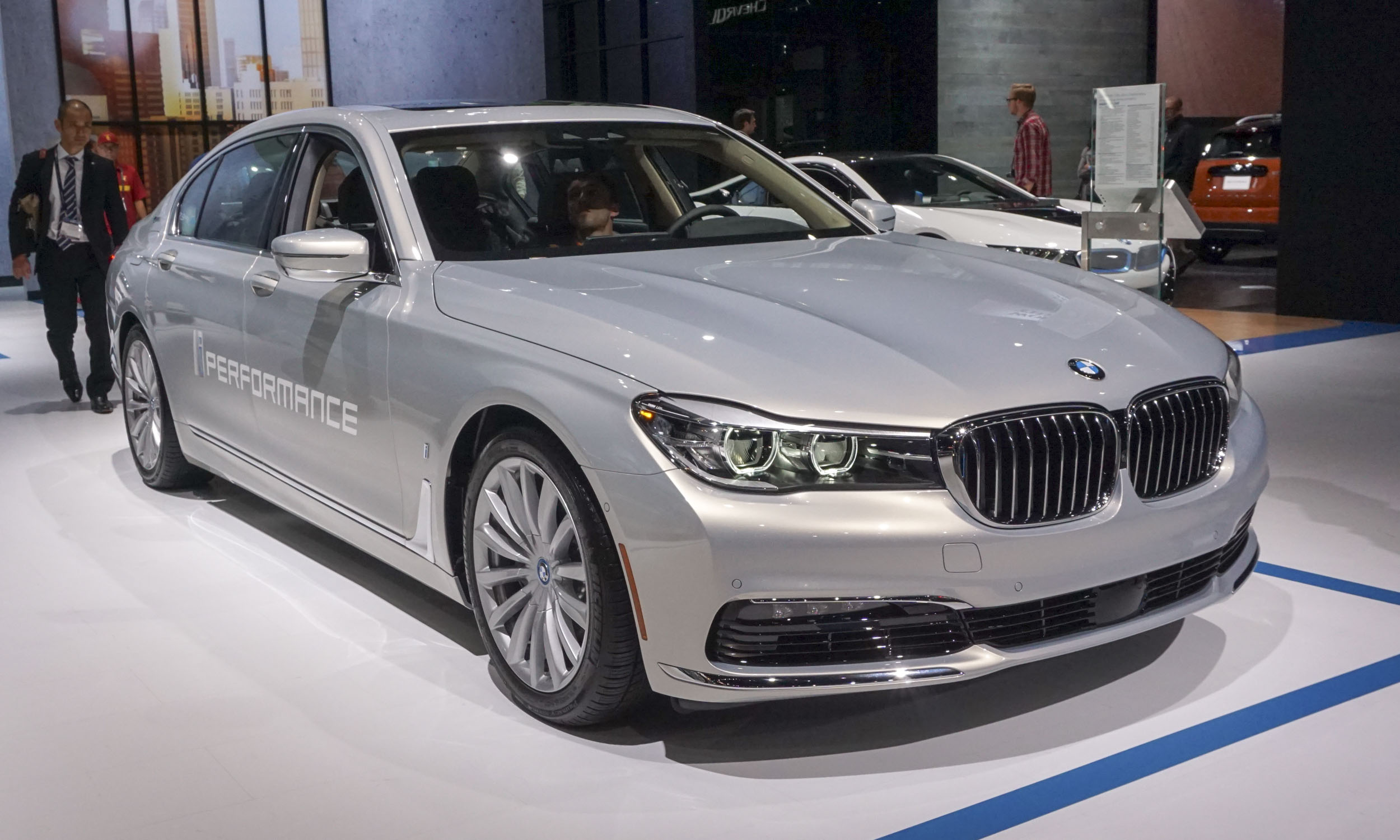 2017 BMW 740e xDrive iPerformance
BMW has done an impressive job combining luxury and performance in its large 7-Series sedan. Now the brand adds high efficiency to the mix with the introduction of the BMW 740e xDrive iPerformance. This newest 7 Series utilizes a plug-in hybrid powertrain consisting of a TwinPower Turbo 4-cylinder engine combined with an electric motor to produce a total of 322 horsepower. The electric motor is fully integrated into the 8-speed Steptronic transmission for optimal use of electrical power and recapturing brake energy. 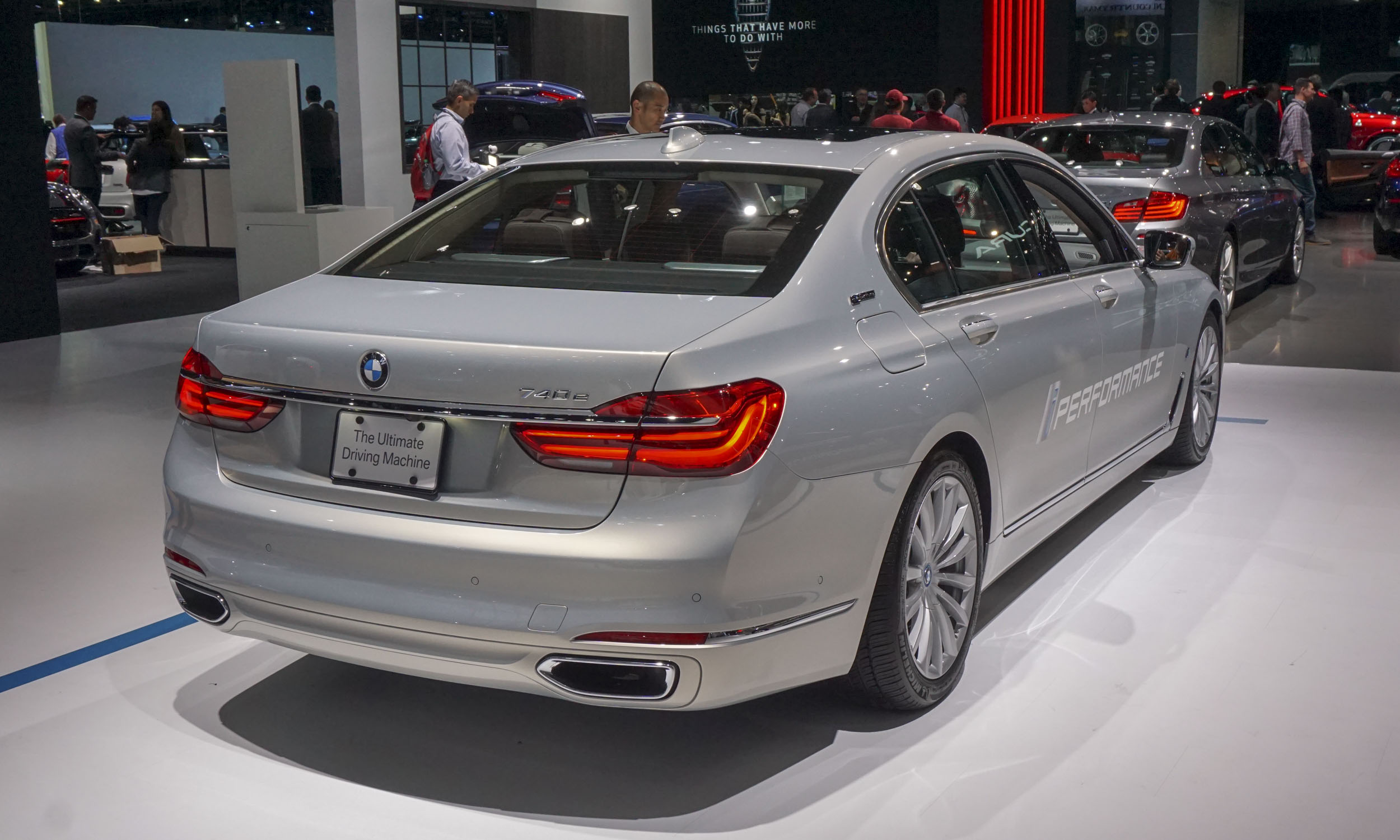 2017 BMW 740e xDrive iPerformance
The 740e can travel as far as 14 miles on electric power at speeds up to 87 mph. When operating in electric mode, fuel economy is rated at 64 MPGe. With the hybrid system, this large sedan can reach 60 mph in just over 5 seconds with a top speed of 155 mph. The dynamic stability control works in concert with the xDrive all-wheel-drive system to offer excellent handling and control on the road. The BMW 740e xDrive iPerformance has just started arriving in showrooms with a retail price of $89,100. 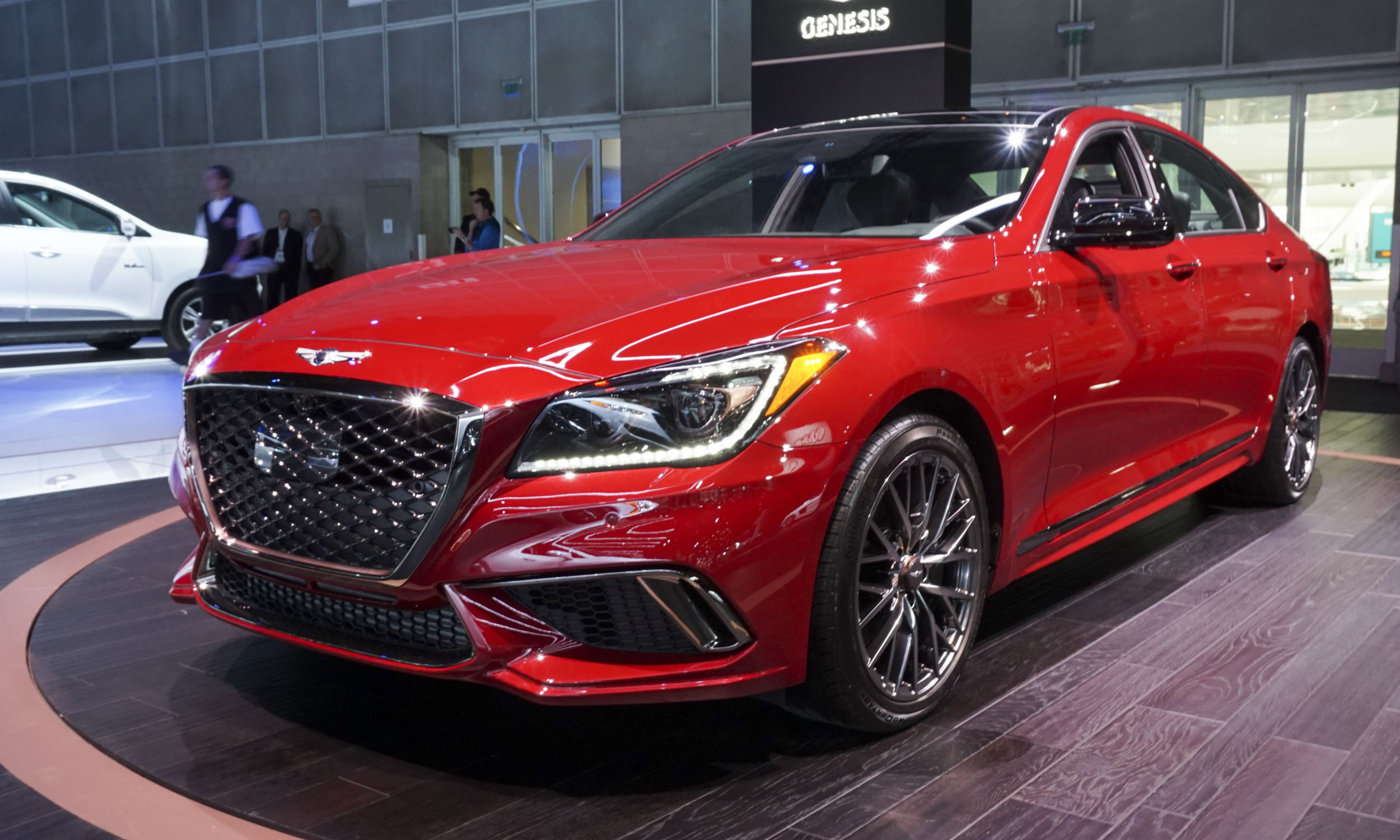 2018 Genesis G80 Sport
As the all-new luxury brand from Hyundai, Genesis adds to its model portfolio with the debut of the G80 Sport. Standing out with a dark chrome grille, unique front and rear fascias, copper accents and 19-inch dark-alloy wheels, the G80 Sport gets a new 3.3-liter twin-turbo V6 engine producing 365 horsepower. A sport-tuned suspension, continuous damping control and ventilated rear disc brakes add to this G80’s sporty nature. “The G80 3.3T Sport reflects our continual commitment to provide drivers with compelling vehicles that meet their individual needs,” said Erwin Raphael, general manager of Genesis in the U.S. 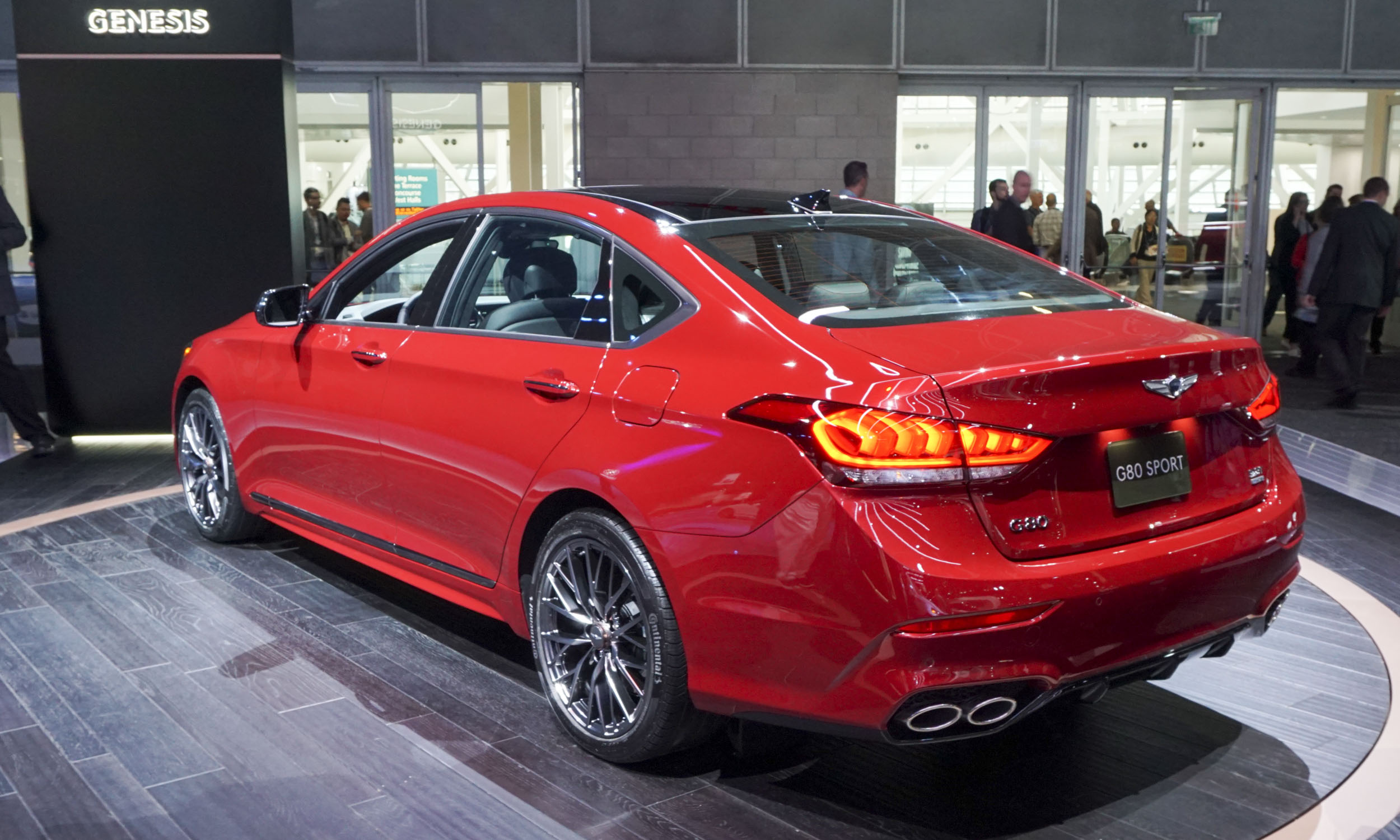