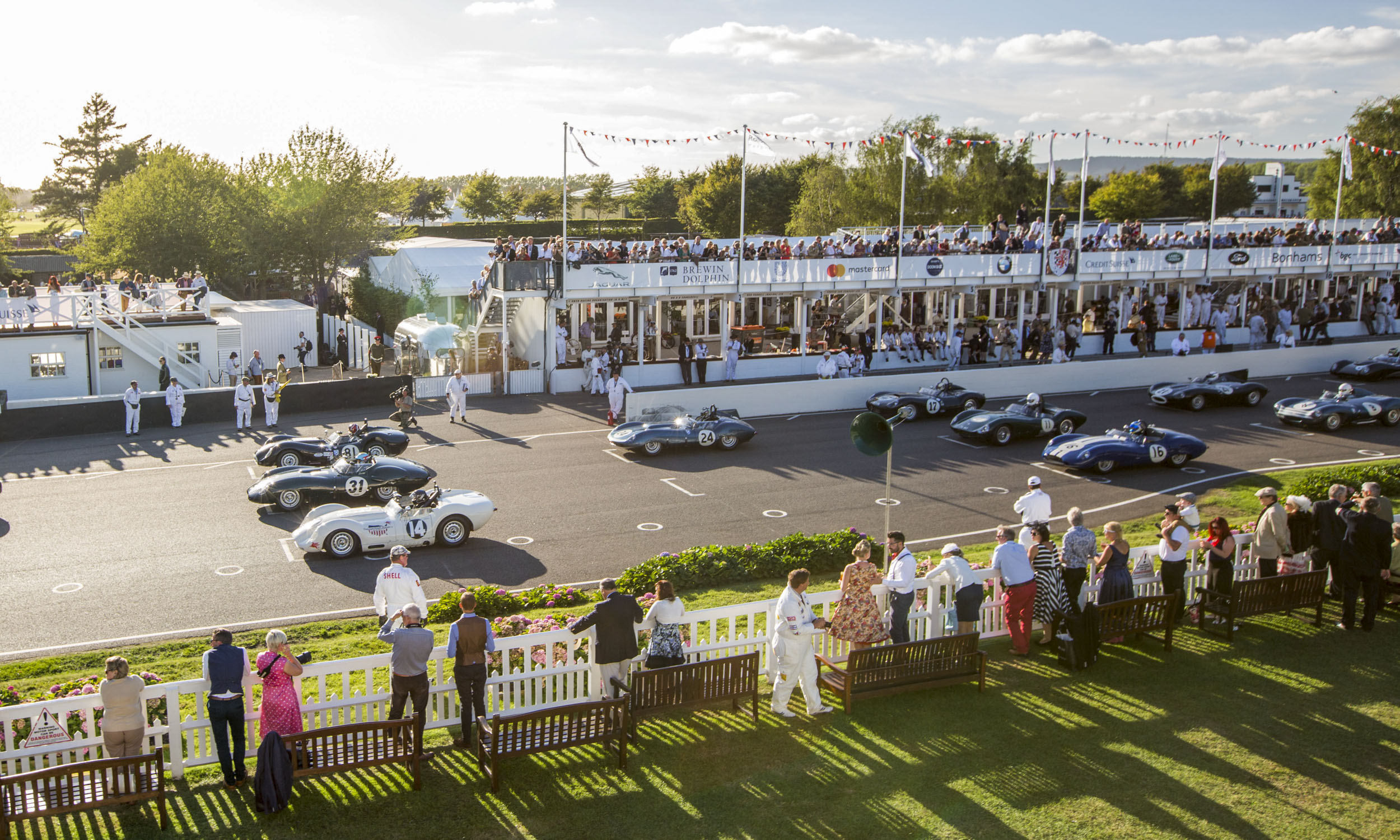 It’s All Good(wood)
There are many historical auto racing events around the world, but nothing quite compares to the Goodwood Revival in the UK. The annual event is so much more than simply a venue for racing historic cars — attending the Revival is akin to stepping back in time. Not only do visitors get to watch important race cars from the 1950s and ‘60s at full speed, every part of the surrounding track and paddock hails from the same bygone era, including transportation and support vehicles. But what really sets this event apart are the attendees, who join in the fun and dress in period costume as well. Add to the mix proper British food, vintage aircraft and plenty of Veuve Clicquot Champagne and you have a bucket-list event worthy of almost any auto enthusiast. Thanks to Subaru of America, we had the opportunity to spend a September weekend soaking in the sights and sounds of the 2016 Revival — what follows is a brief primer on all things good at Goodwood. 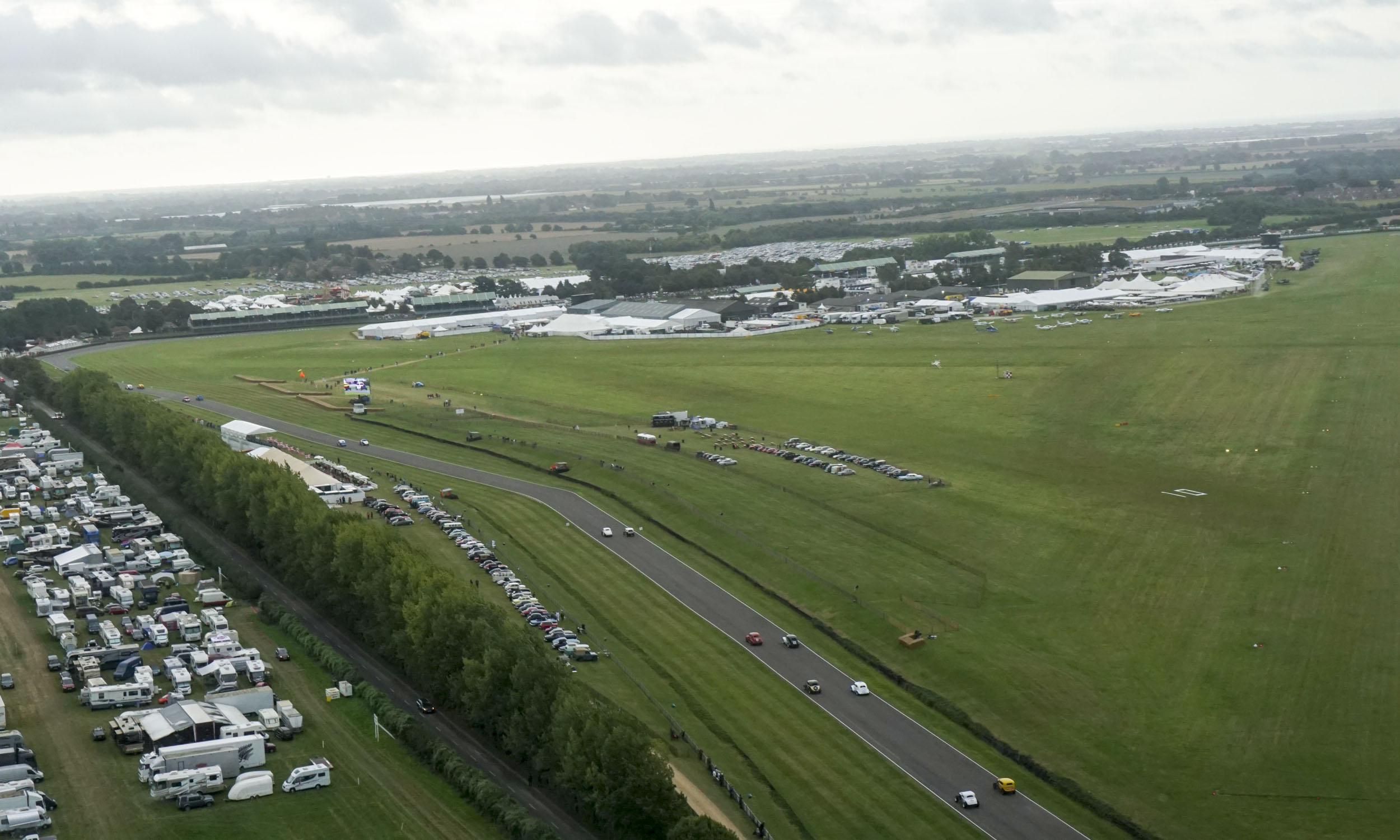 A Little History
The Goodwood Revival takes place at the site of Royal Air Force Westhampnett airfield, which was home to a number of Spitfire squadrons and also played a key role in the Battle of Britain during World War II. After the war, the airbase closed and land owner Freddie March turned the perimeter road into a race course that eventually became the Goodwood Motor Circuit. The first postwar automobile races occurred in September of 1948, and over the next 18 years the circuit became one of the most prestigious in the world. The track closed in 1966 but reopened once again in 1998. Every detail of the original venue was restored to its former glory, recreating the appearance of the grounds 50 years earlier, and the Goodwood Revival was born. The land and the event are currently owned by the grandson of Freddie March — Charles Gordon-Lennox, also known as Lord March. 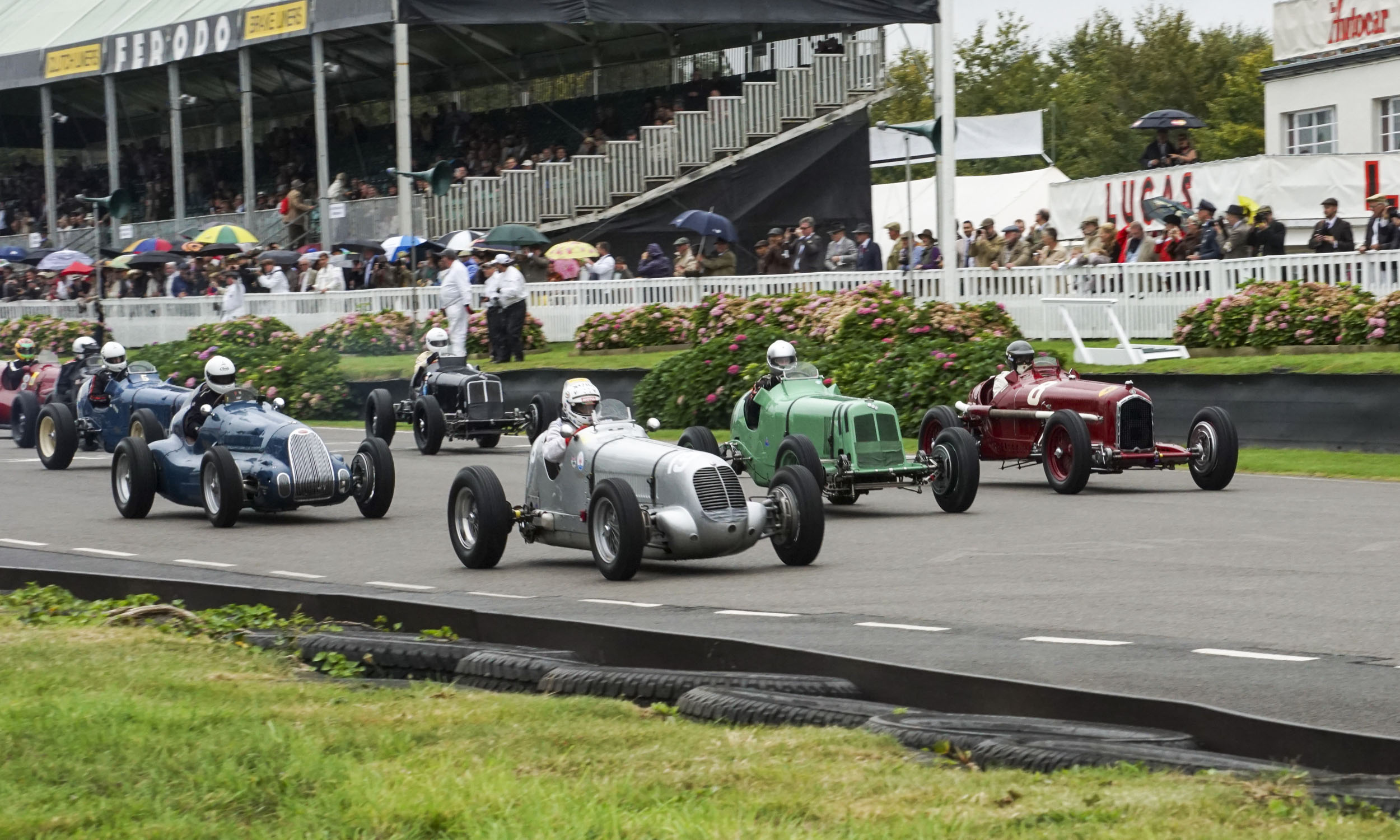 Going Racing
Ultimately the Goodwood Revival centers around three days of historical auto racing. A wide variety of racing series and vehicles are represented throughout the long weekend. This year vehicles ranged from grand prix cars from the late 1940s to sports cars of the 1960s, with plenty of others in between. Even motorcycles of the early 1950s had their moments on track. And speaking of moments, one of the most amazing aspects of Goodwood is the racing itself. The Revival is not about polite parade-like laps — the drivers (and riders) go all out, just as they would have back in the day. 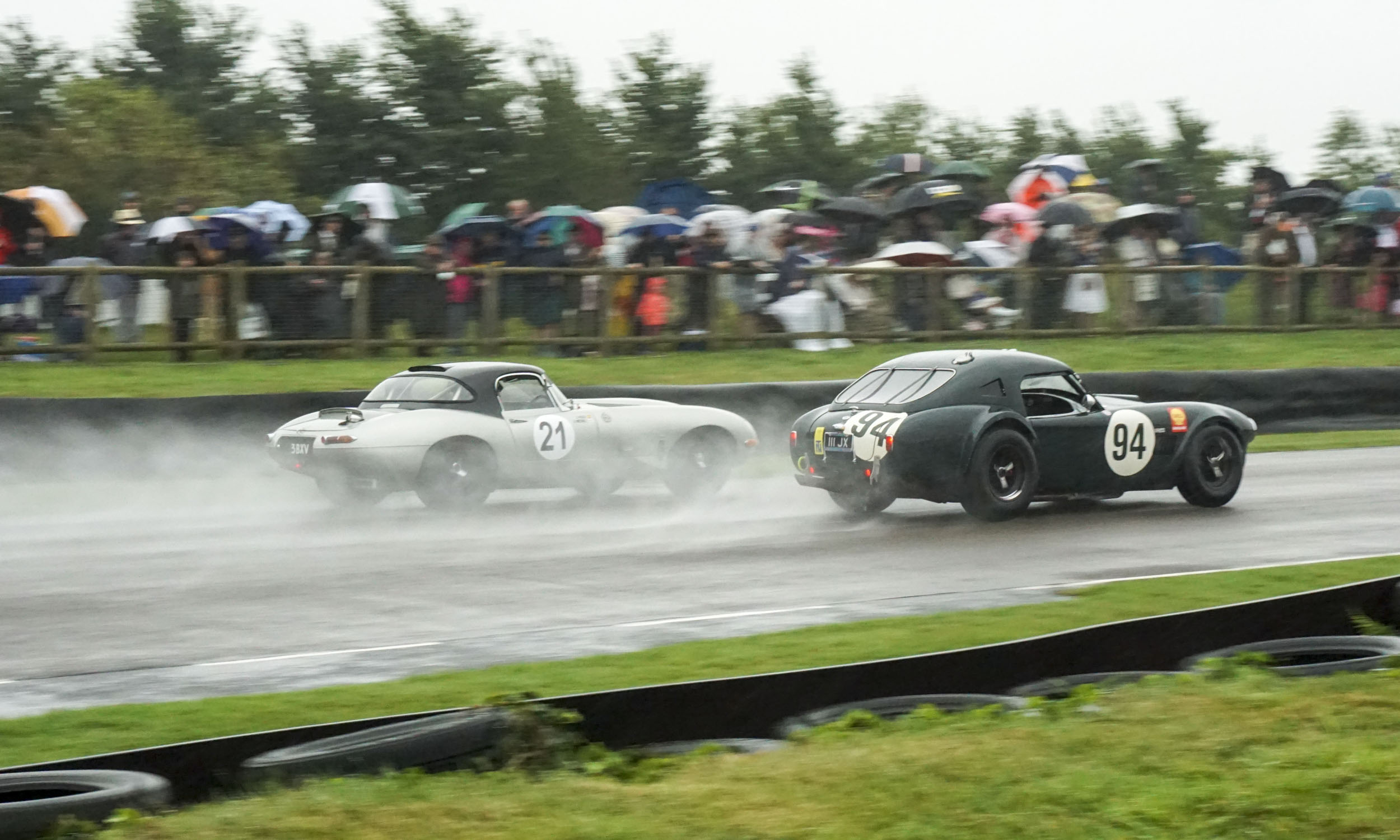 Racing in the Rain
Unlike some modern racing series, these hardy vintage racers didn’t let a little rain stop them. Not even a lot of rain. During our second day at Goodwood the skies opened up intermittently all day, with plenty of wind adding to the excitement. Open cockpit grand prix cars, narrow-wheeled vintage motorcycles and high-powered sports cars are difficult enough to handle in dry conditions — in the rain they become downright scary. Summoning courage from a bygone era of racing, 2016 Revival participants ignored the elements and pushed their cars (and bikes) for all they were worth — which, coincidentally, is a lot. 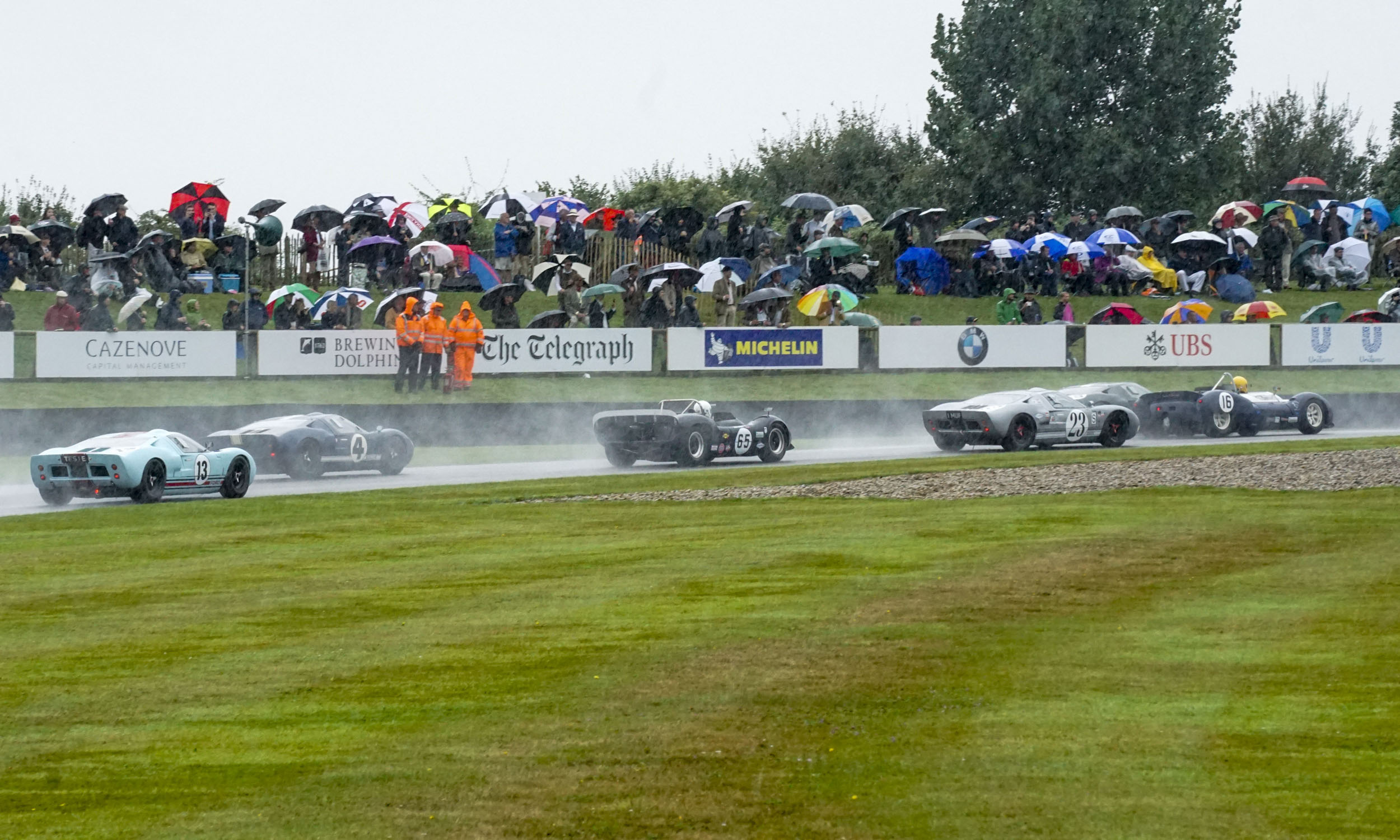 Vehiclular Variety
What follows are just a few of the racing machines that took to the Goodwood circuit in both sun and rain at the 2016 Revival. 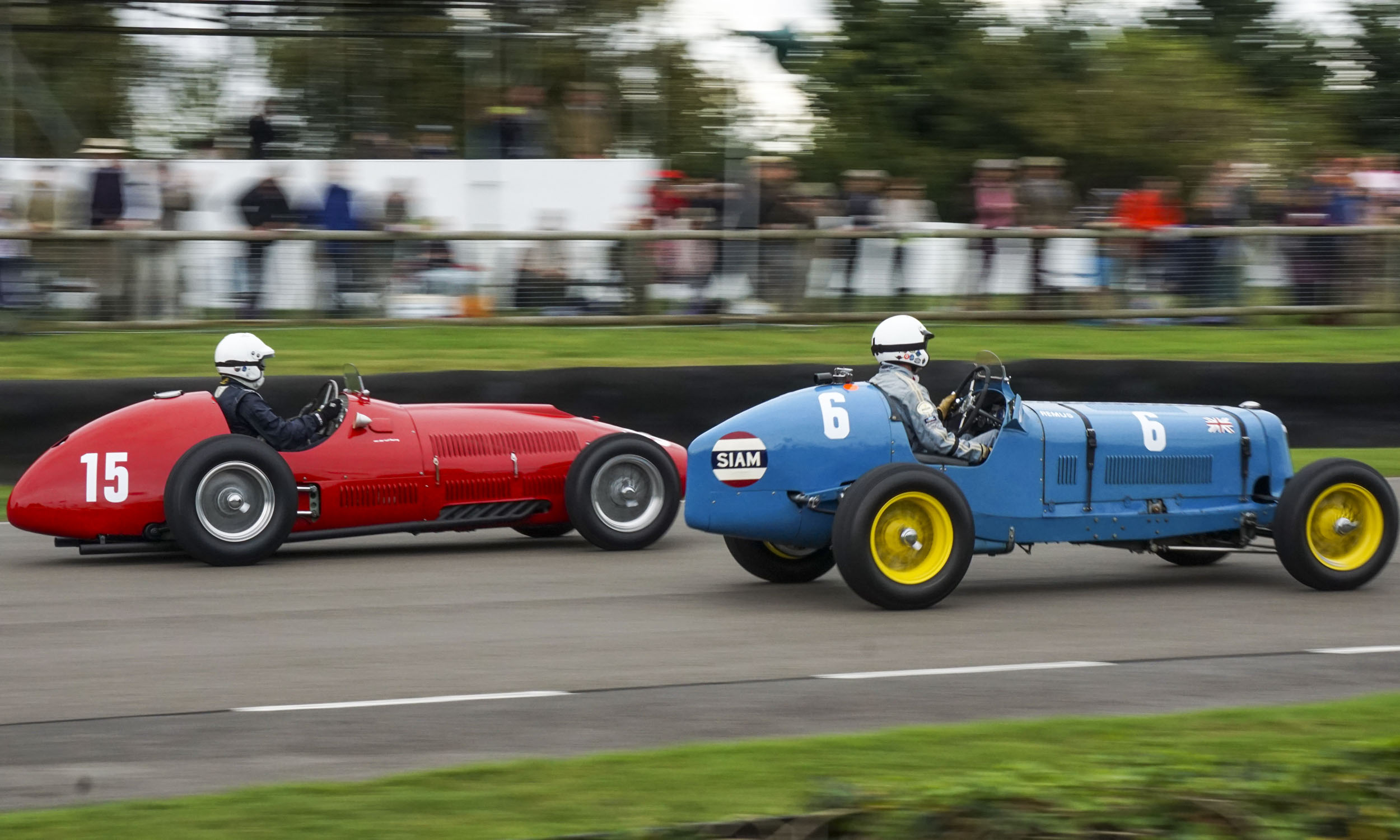 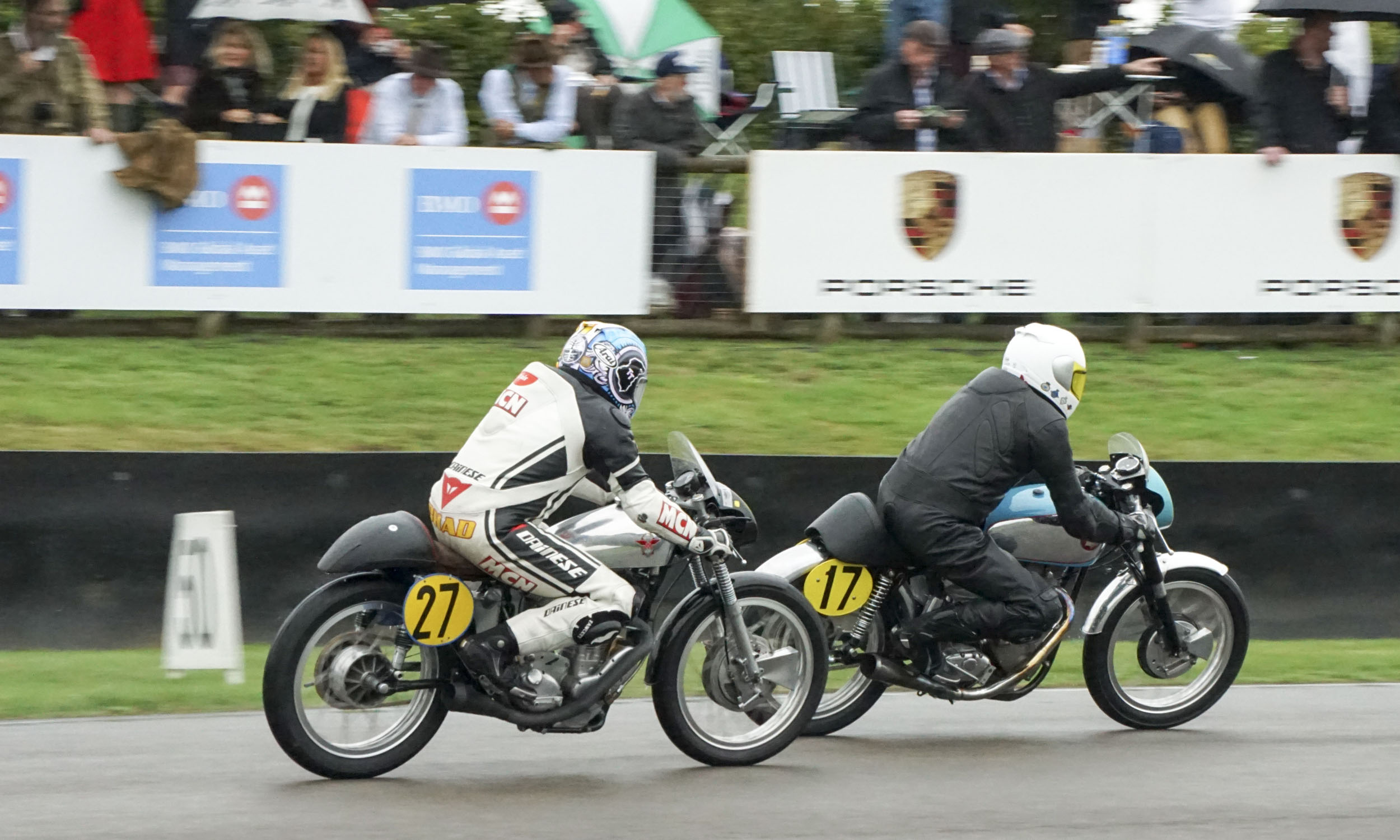 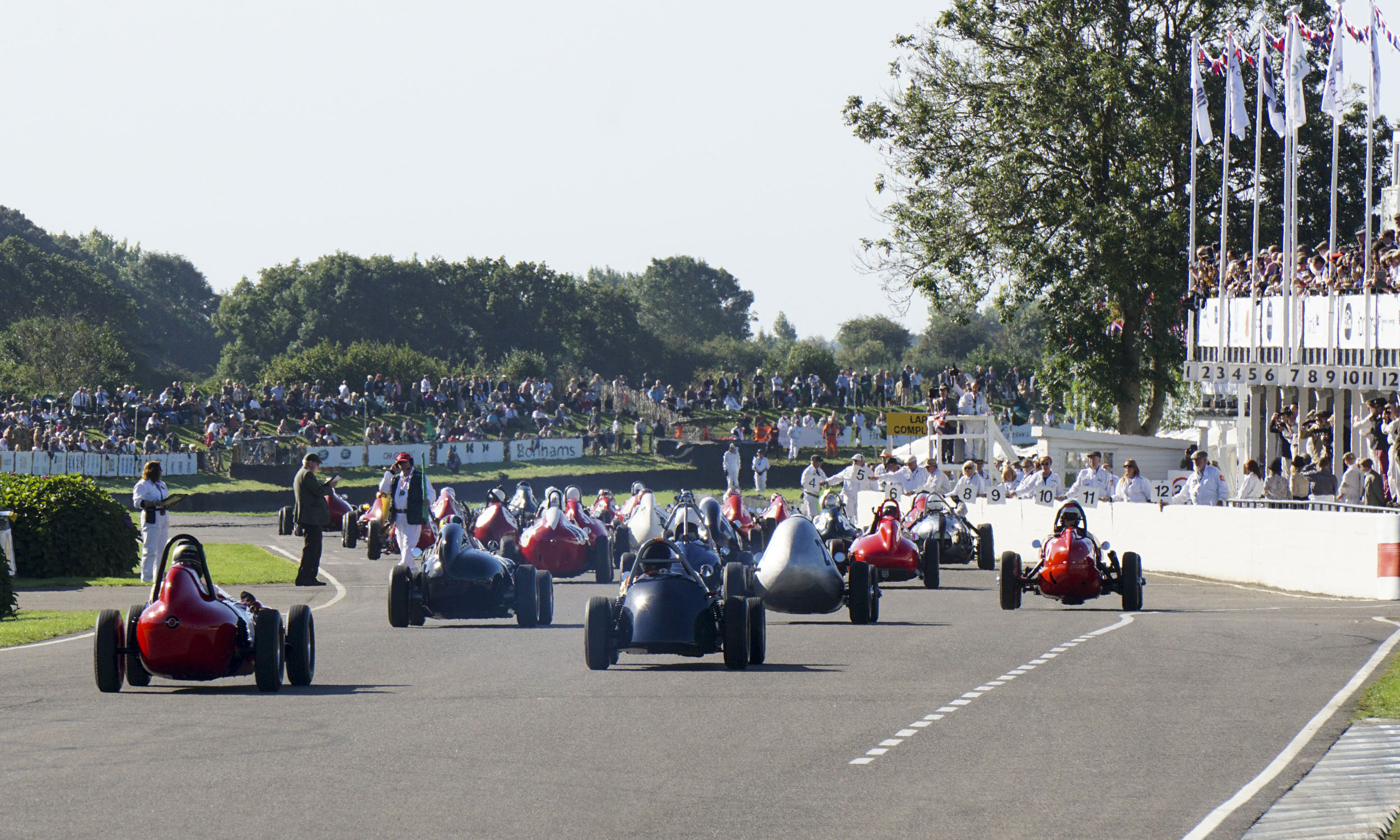 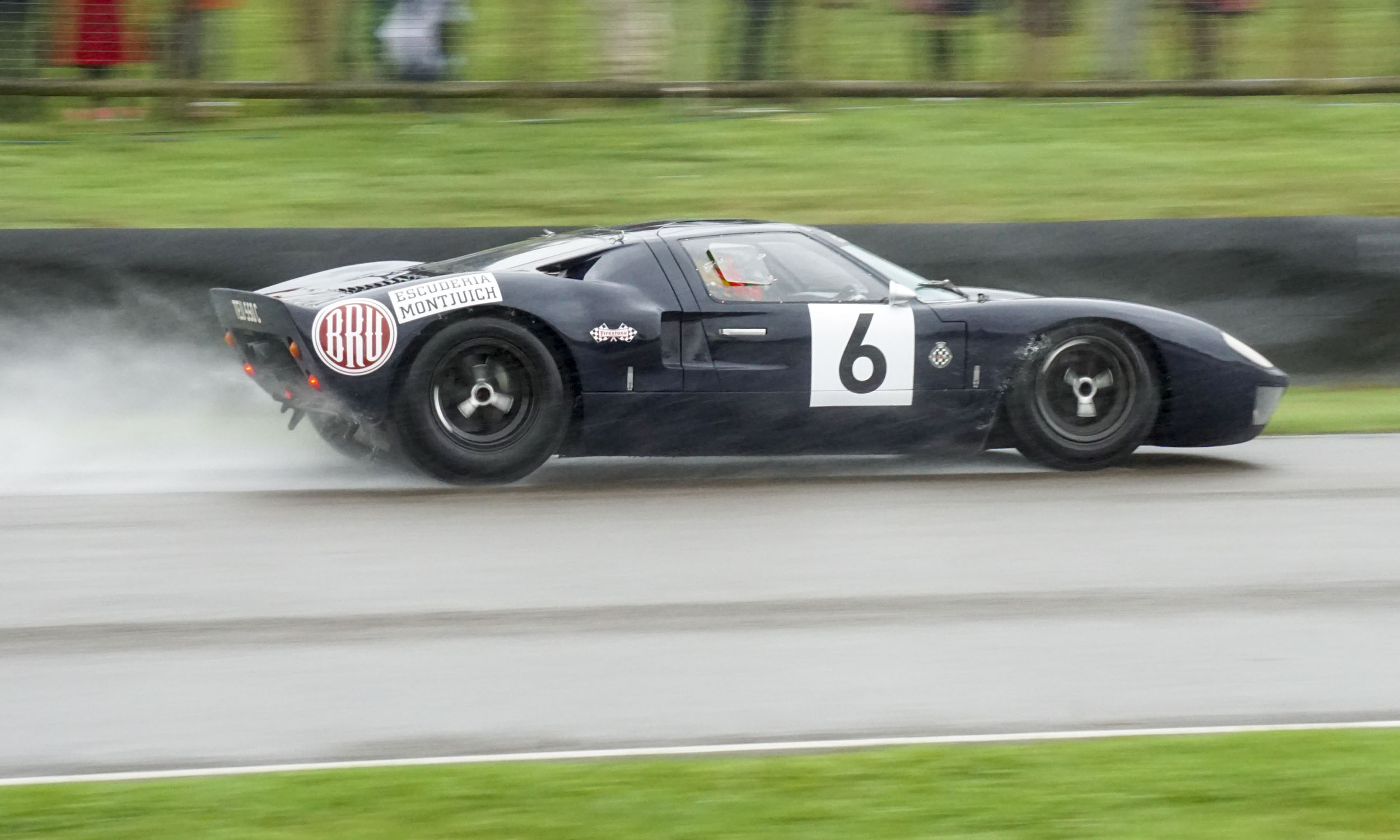 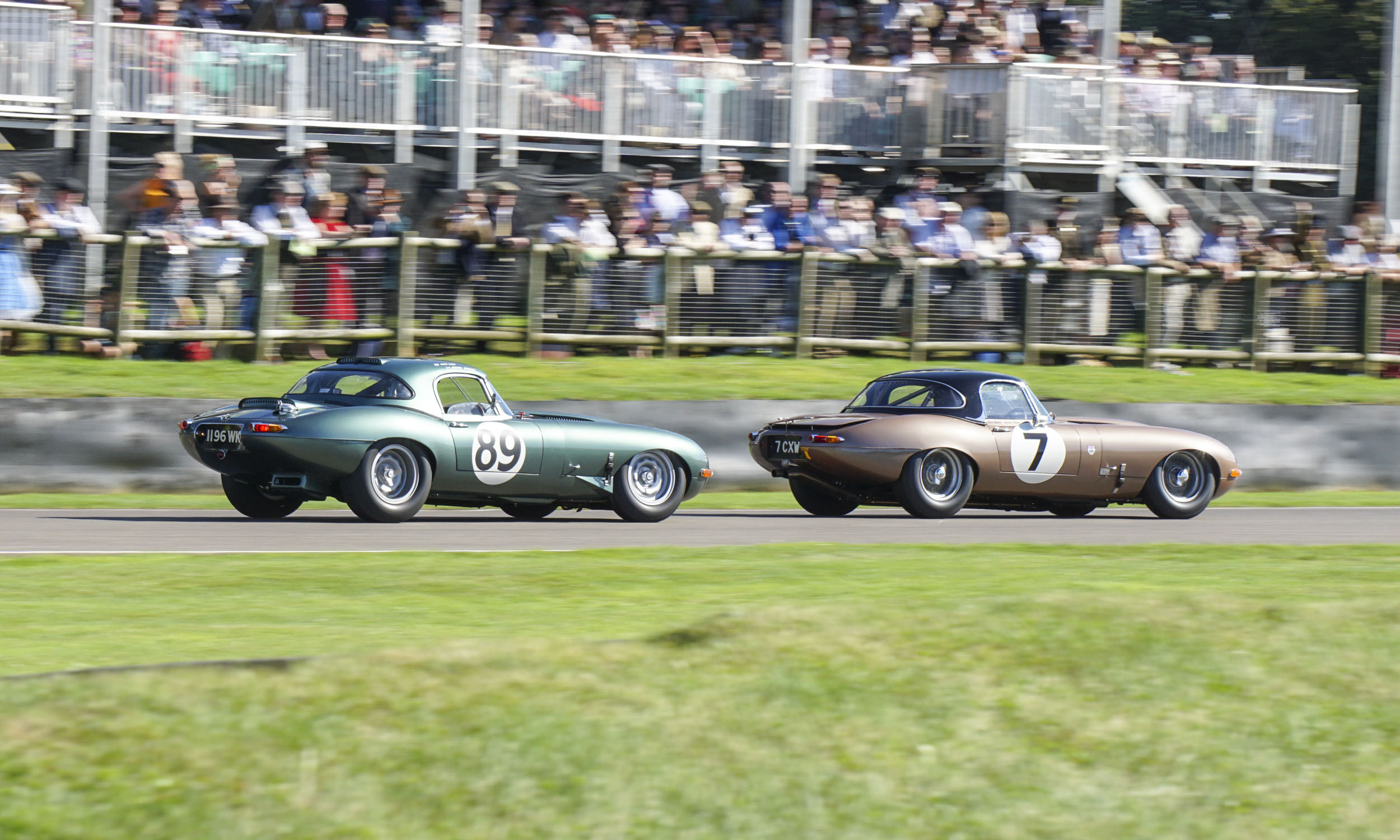 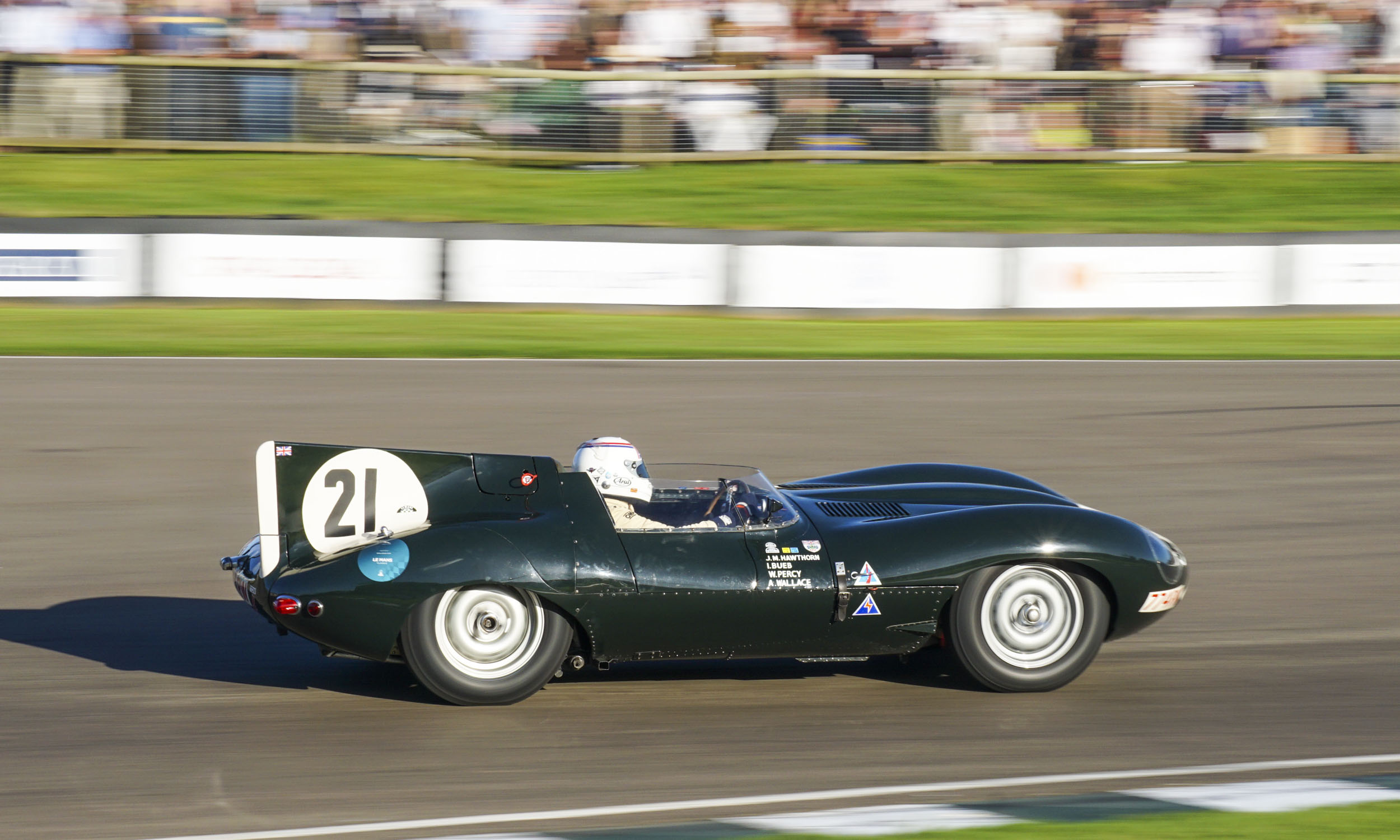 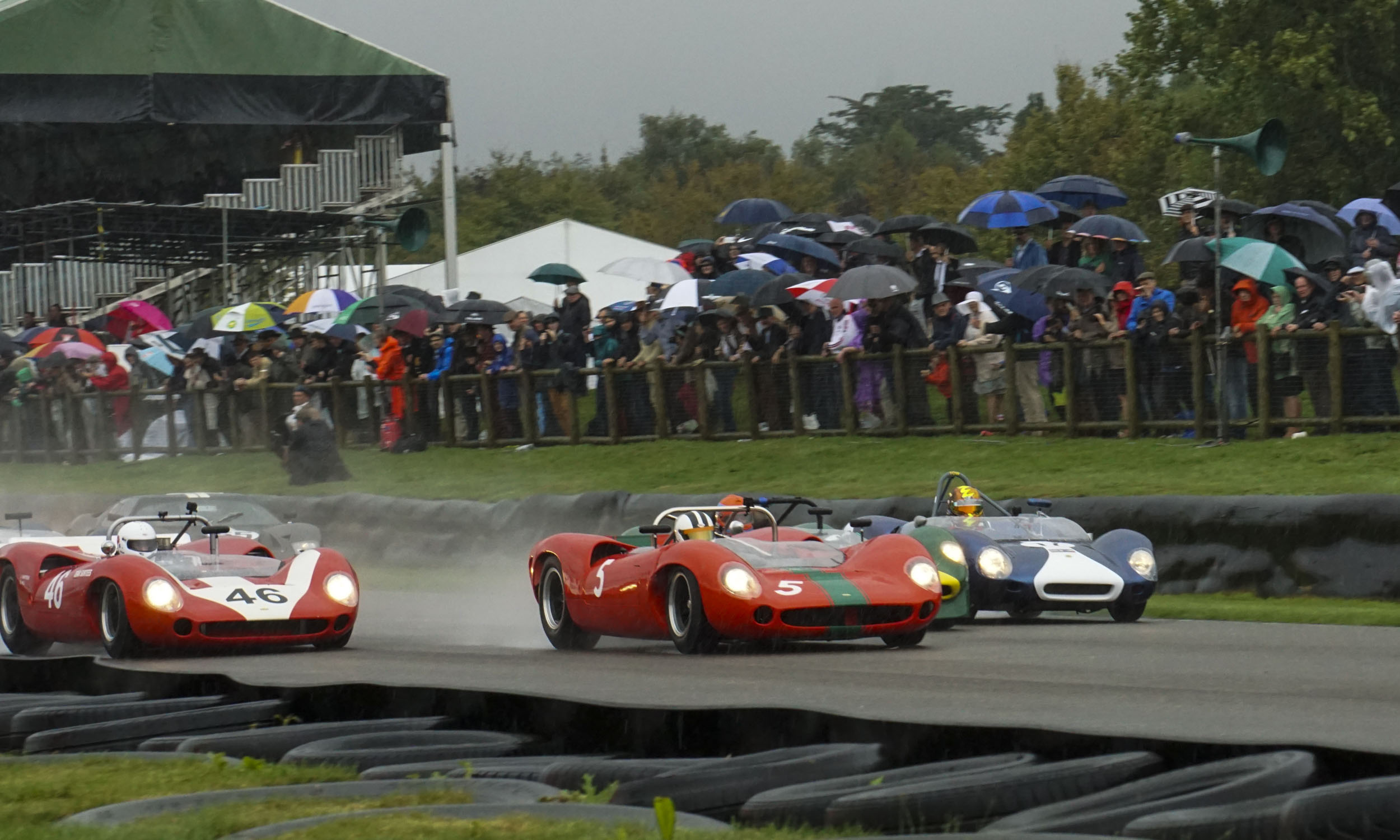 Unlimited Sports Prototypes
These unlimited sports prototypes are of a type that would have raced up until 1966. Pictured: 1966 Lola-Chevrolet T70 Spyders. 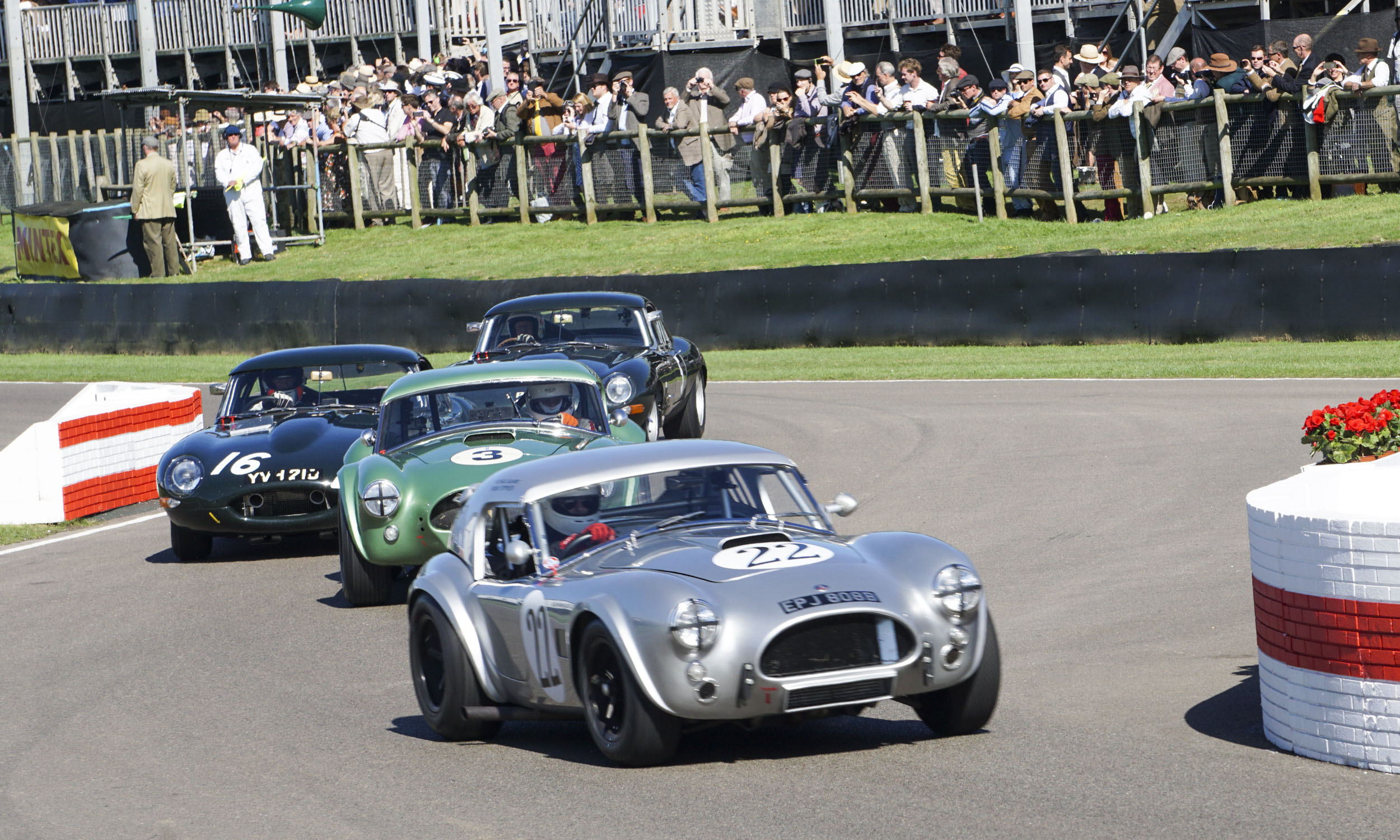 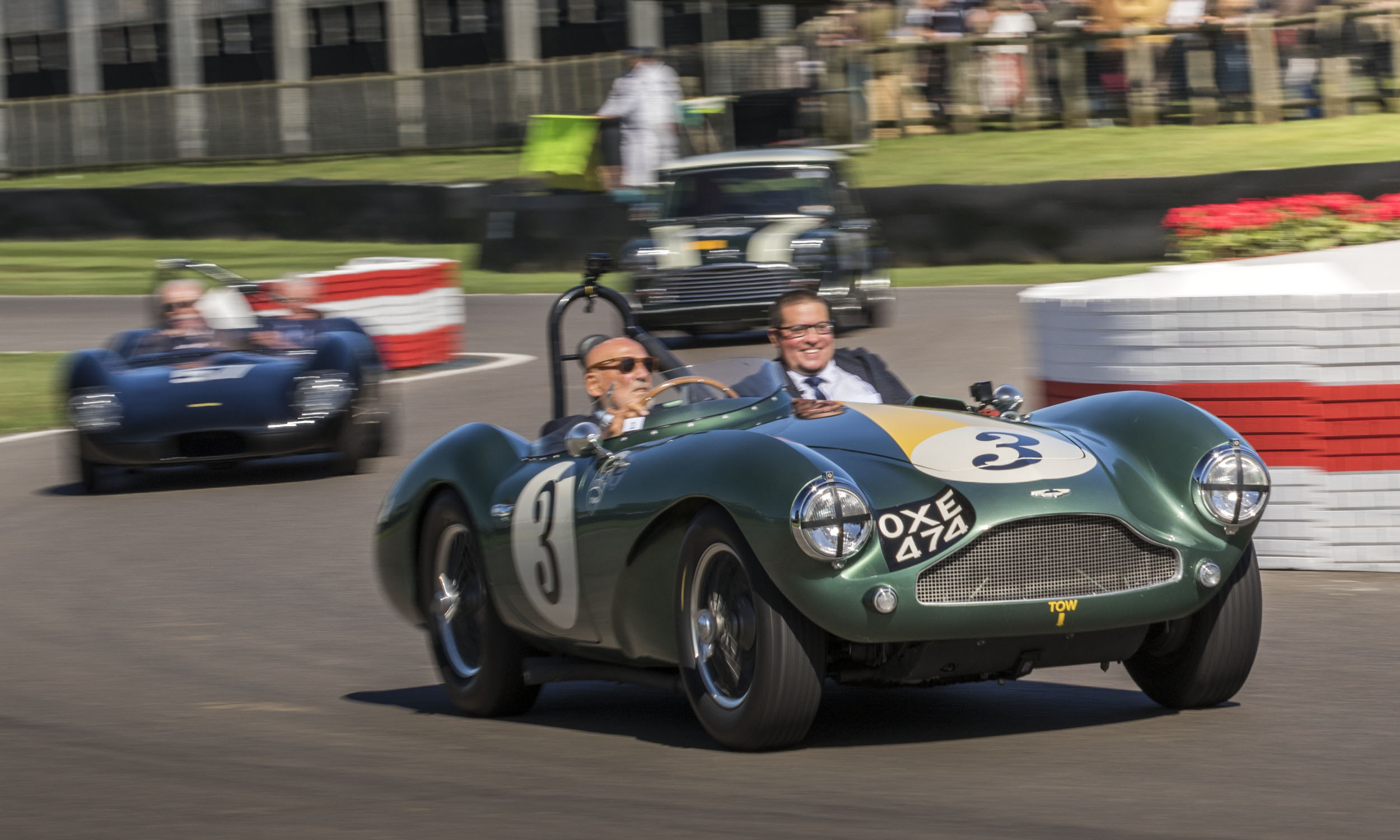 Driving Legends
Legendary drivers including Sir Stirling Moss were in attendance at this year’s Goodwood Revival. 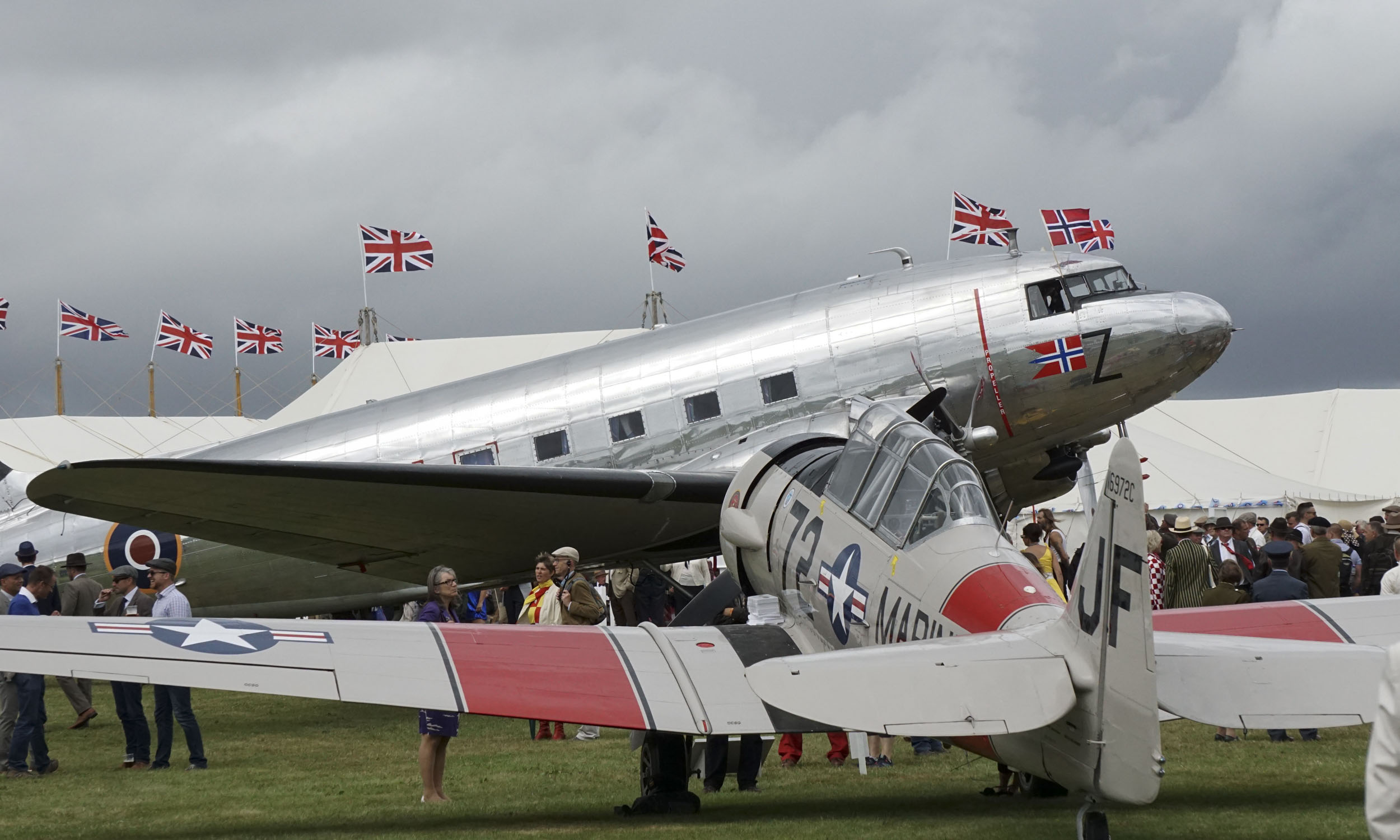 The Planes, The Planes
Although Goodwood is now known for its racing circuit, it was first and foremost an airfield. The grassy runway is still in use today, both for arriving guests as well as demonstration flights. The vast display of vintage aircraft at the 2016 Revival included a large DC3 passenger plane as well as Spitfires and P51 Mustangs. 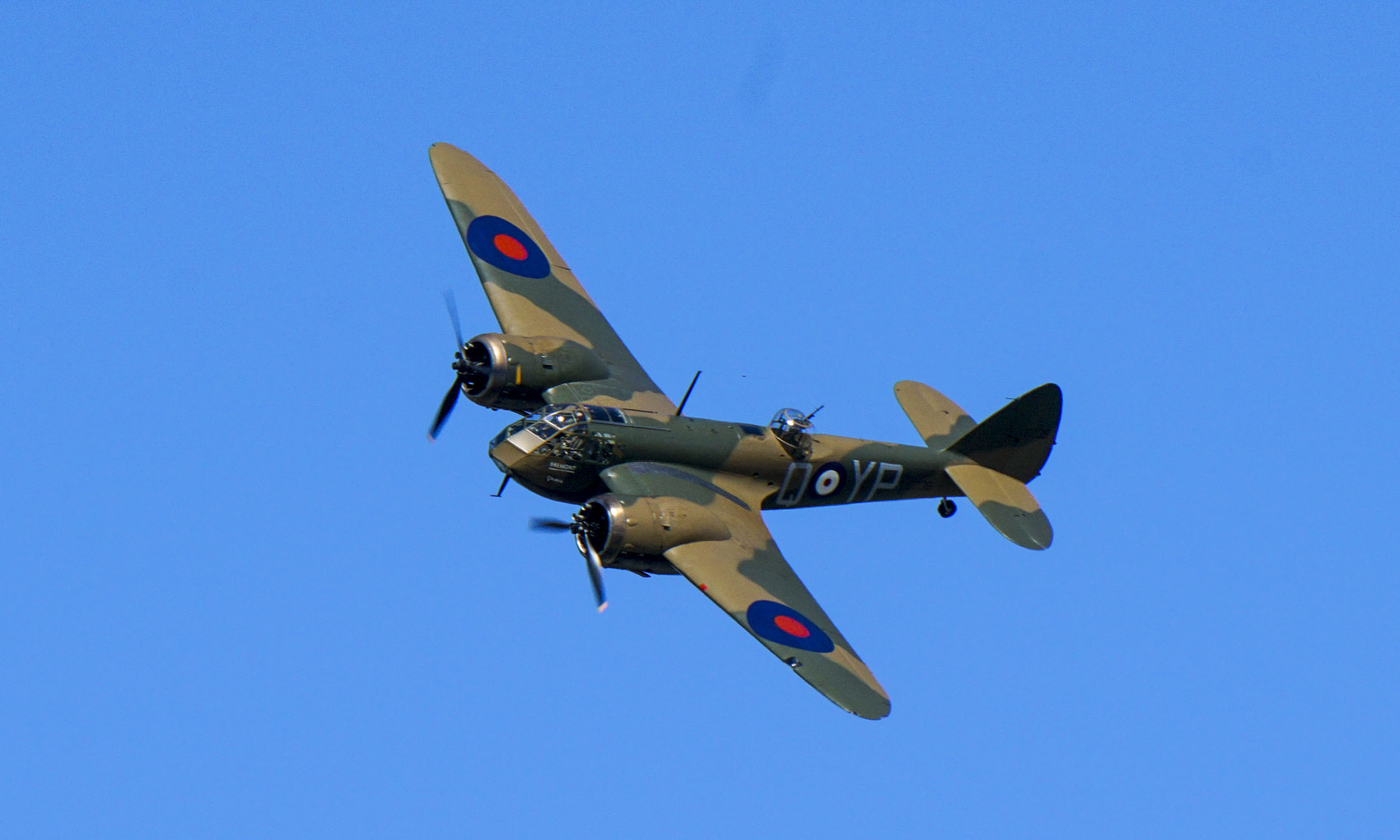 Taking to the Air
Throughout the Revival vintage WWII aircraft buzzed the circuit, including this Bristol Blenheim. 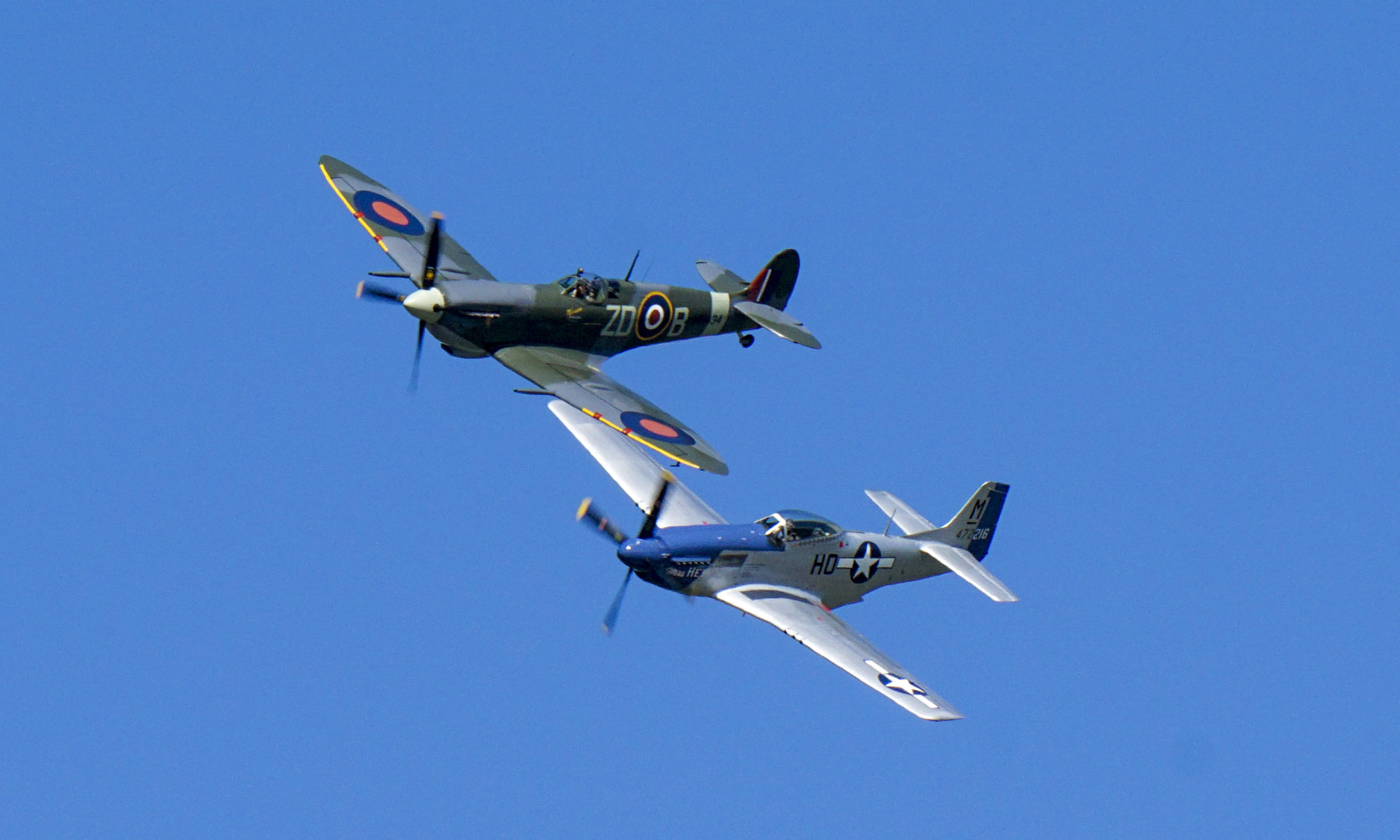 Brits and Americans
The 2016 Goodwood Revival hosted an interesting mix of British and American aircraft, including this Spitfire and P51 Mustang that flew in formation. 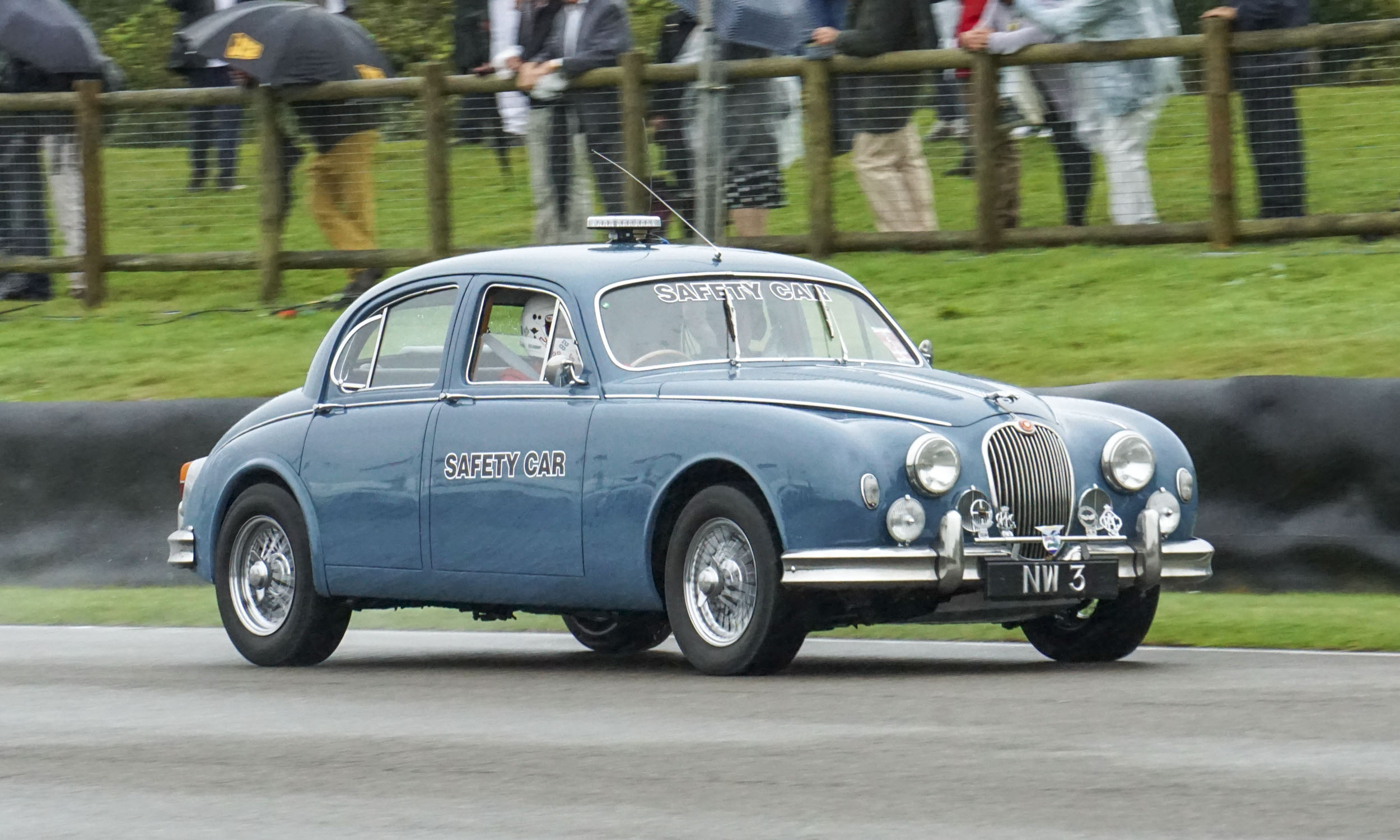 Support Vehicles
Adding to the full immersion in the postwar racing scene were the support vehicles. Safety cars were Jaguar MK2 saloons (sedans) from the early 1960s, and even a Series 1 Land Rover tow truck pulled stricken cars off the track. 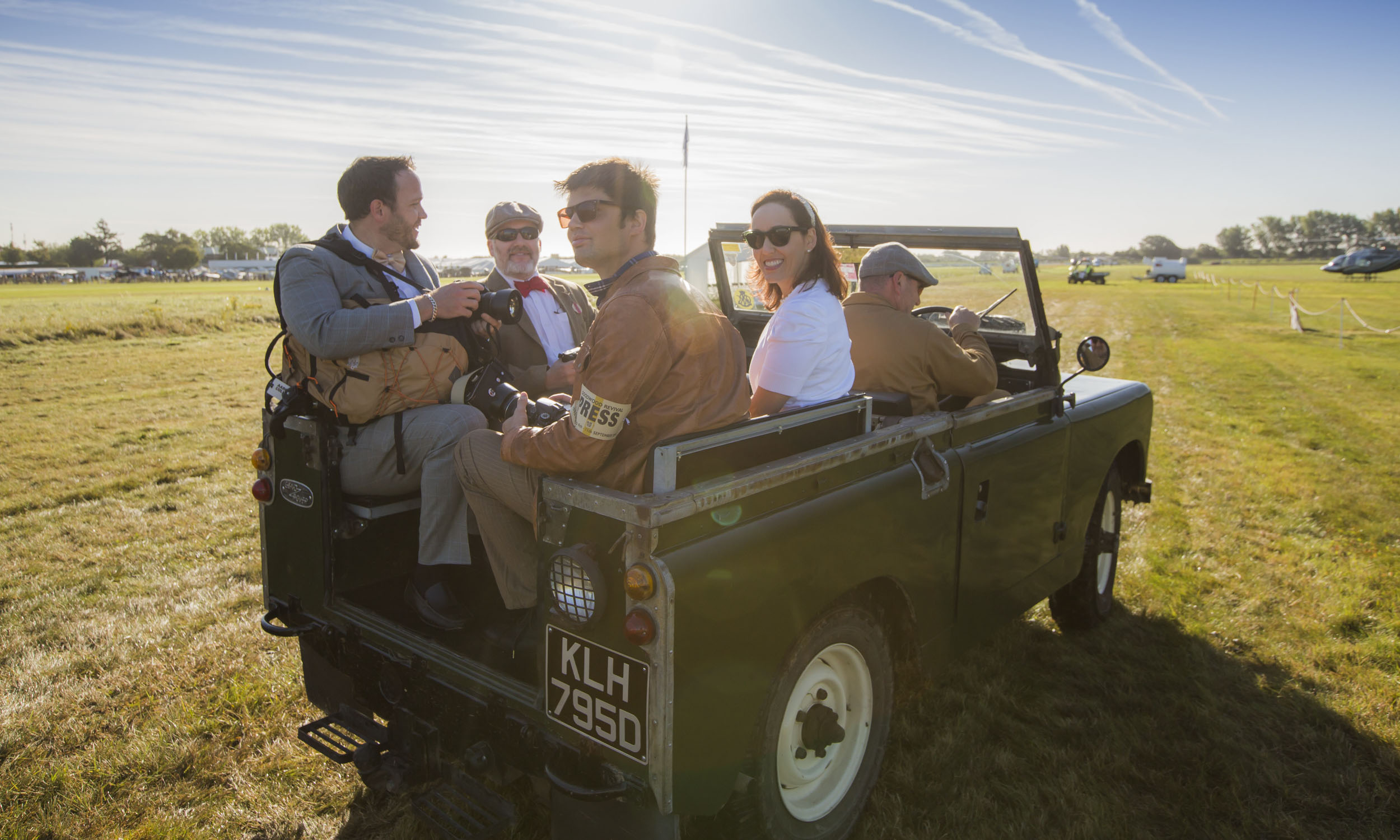 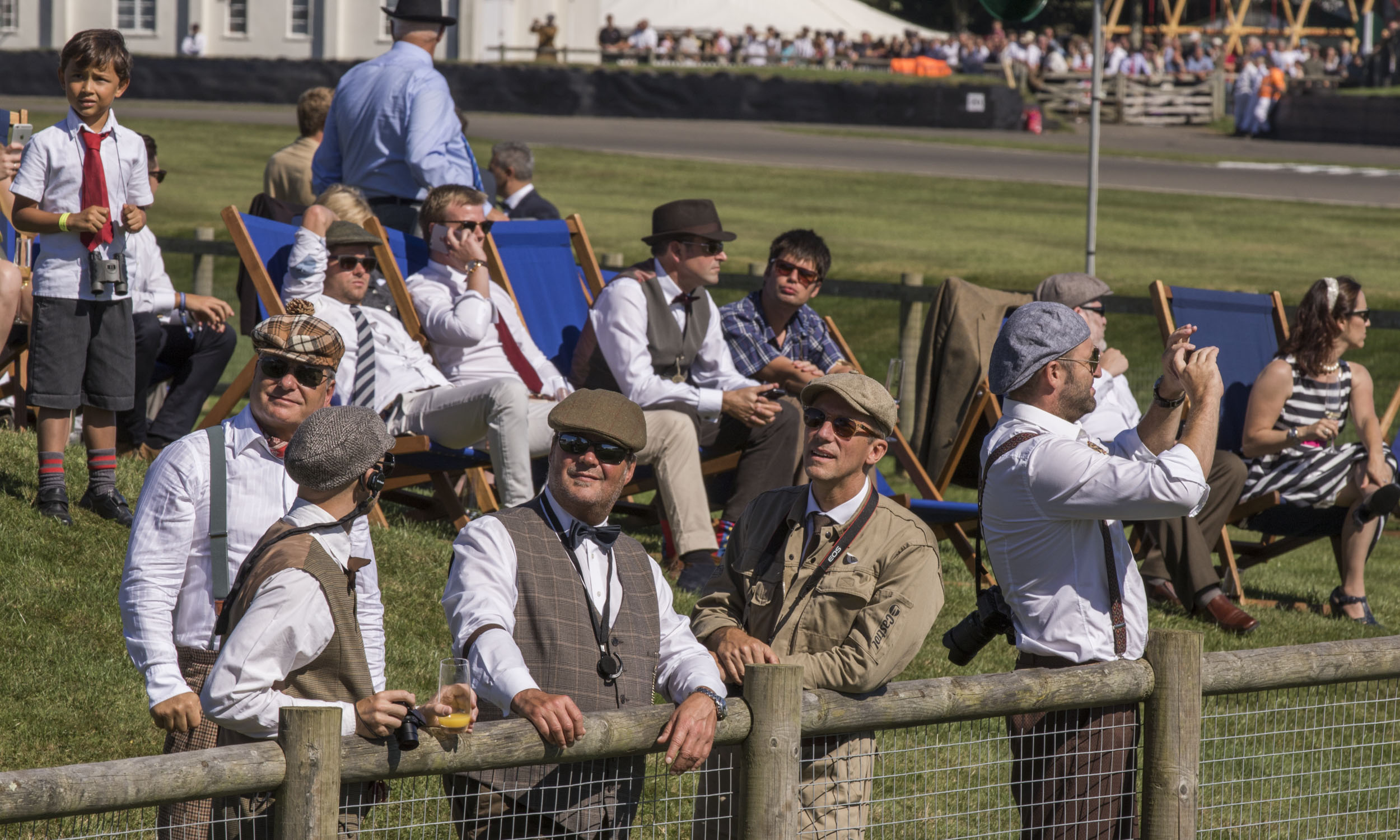 The People
People are the true charm of the Goodwood Revival. Granted, cars and planes are the stars of the event, but everywhere you look smiling attendees show off outfits from the same era as the cars, making for a complete time warp. Spotted in the crowds throughout the weekend were plenty of tweed, Ivy caps, poodle skirts and go-go boots. Some also chose to wear WWII military uniforms. 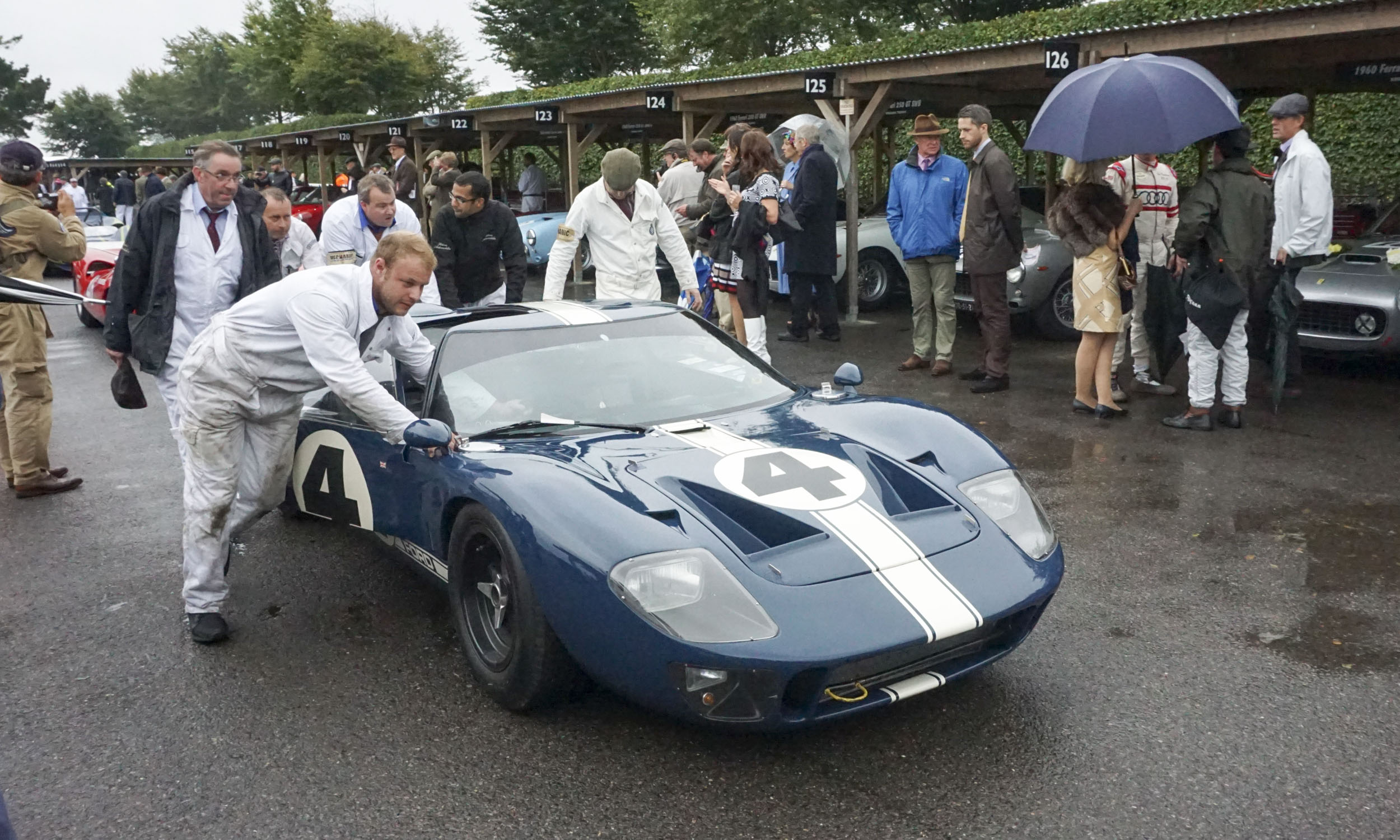 Mechanics
Even mechanics working on race cars throughout the weekend kept up the historical conceit by donning period workwear that teams would have worn when these amazing cars raced in their heyday. 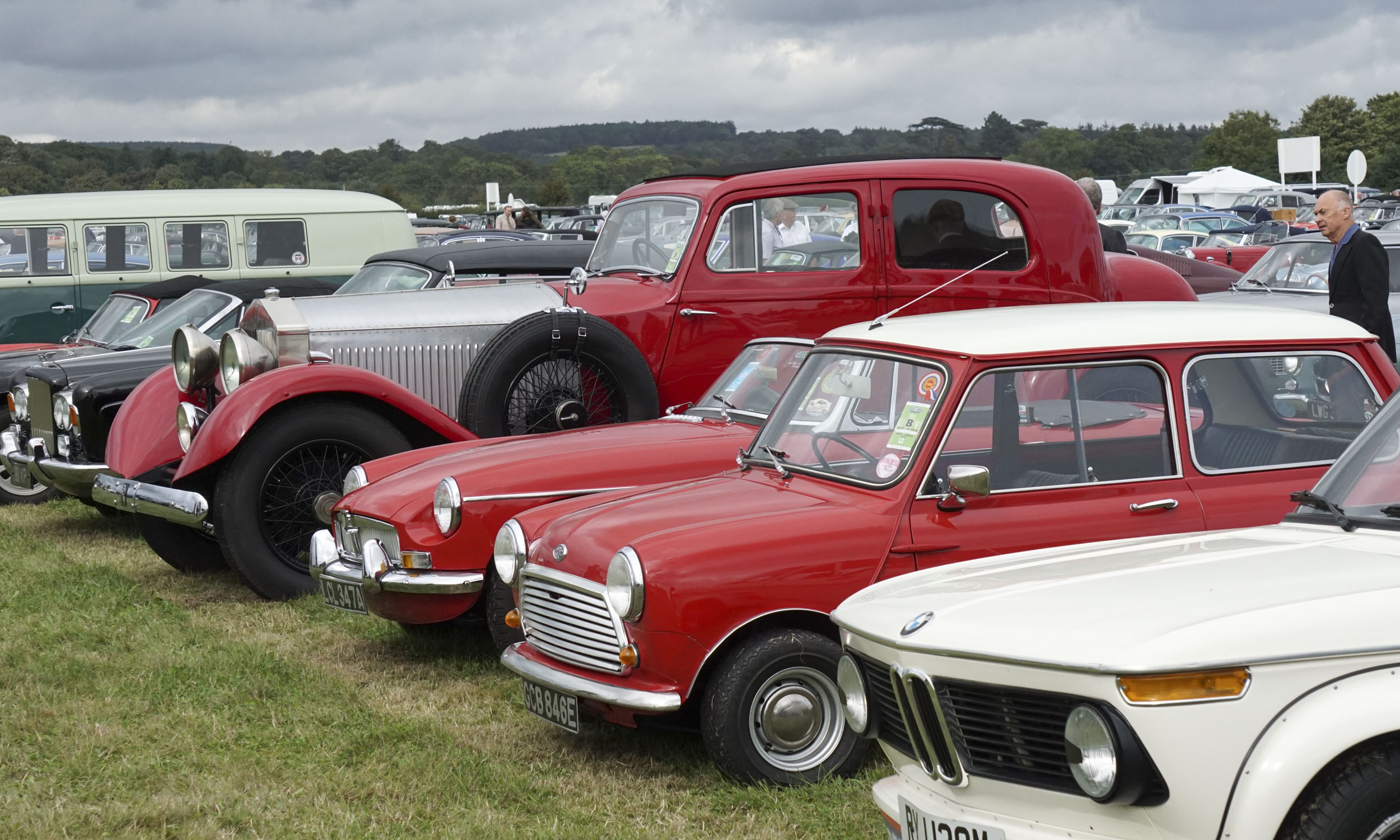 Public Parking
Those attending the Revival are encouraged to drive their vintage automobiles. The parking lot was an auto show unto itself, complete with classics from Jaguar, Ferrari, Bentley — even Ford and Chevrolet. 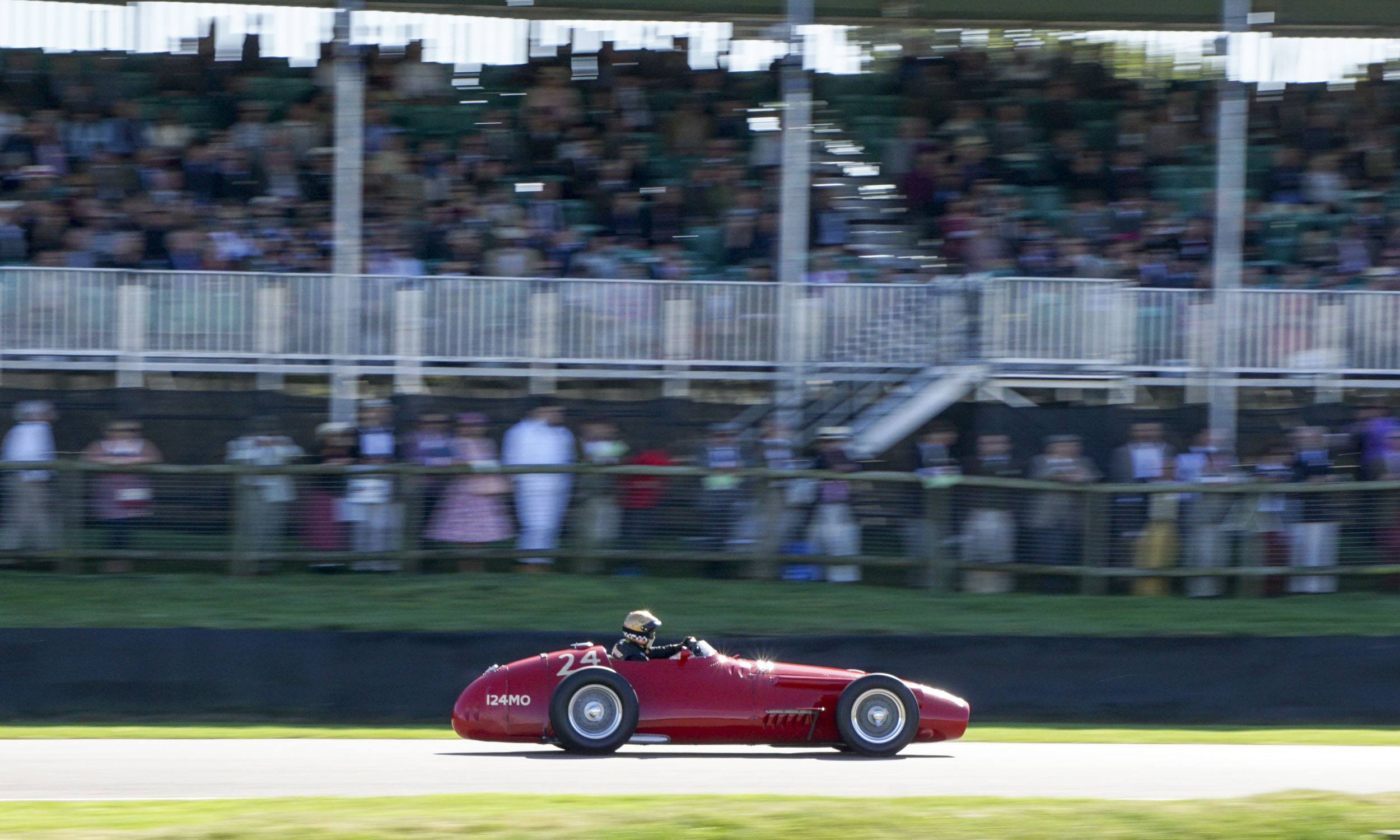 Worth the Trip
A magnificent experience for any car enthusiast, history buff or racing aficionado, the Goodwood Revival has become an ultimate automotive destination — certainly worth attending at least once in a lifetime.