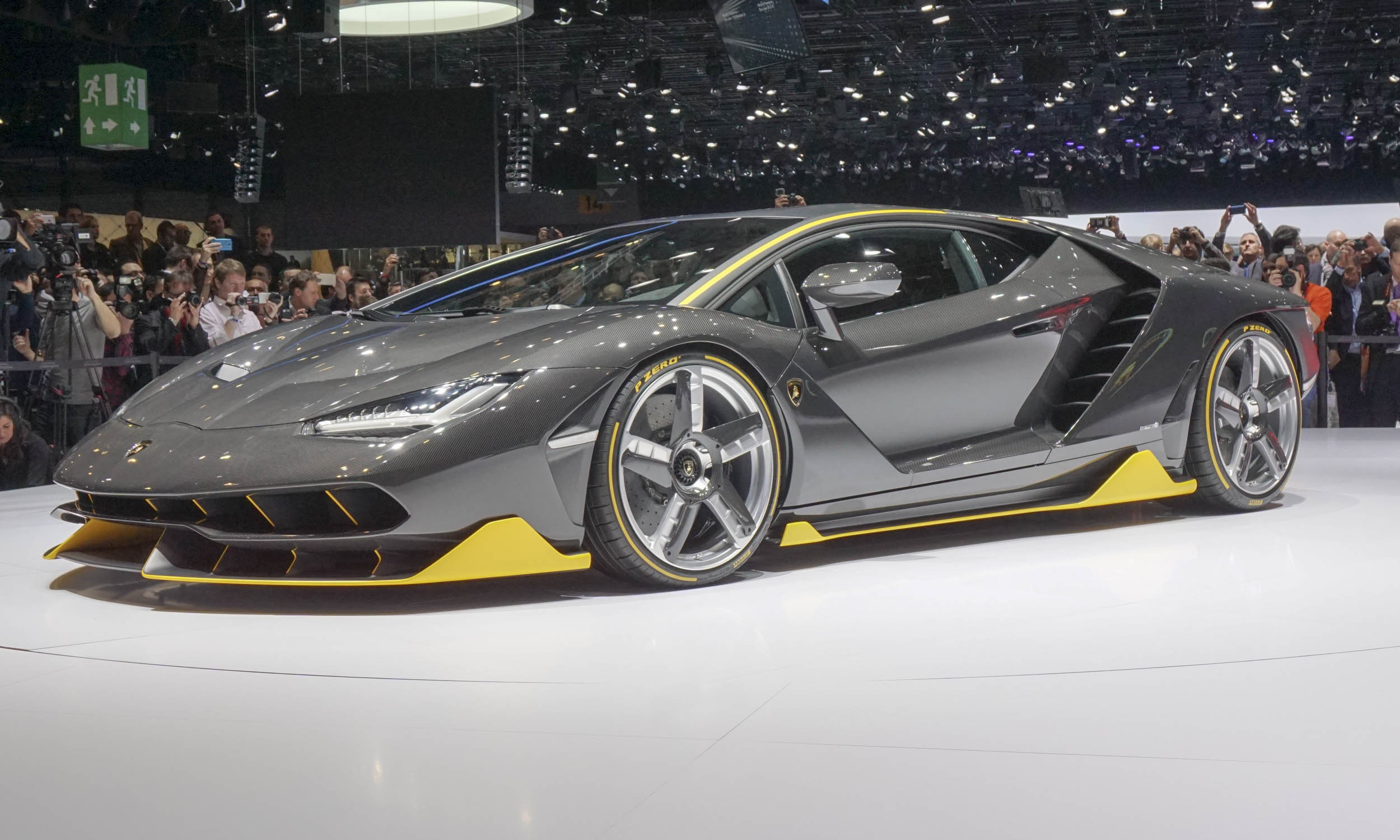 Happy Birthday Ferruccio
On April 28, 1916, the man whose name adorns one of the most exclusive, exotic Italian sports cars was born. So in proper tribute and in celebration of 100 years since Ferruccio Lamborghini’s birth, the company is introducing the special limited-edition Centenario. 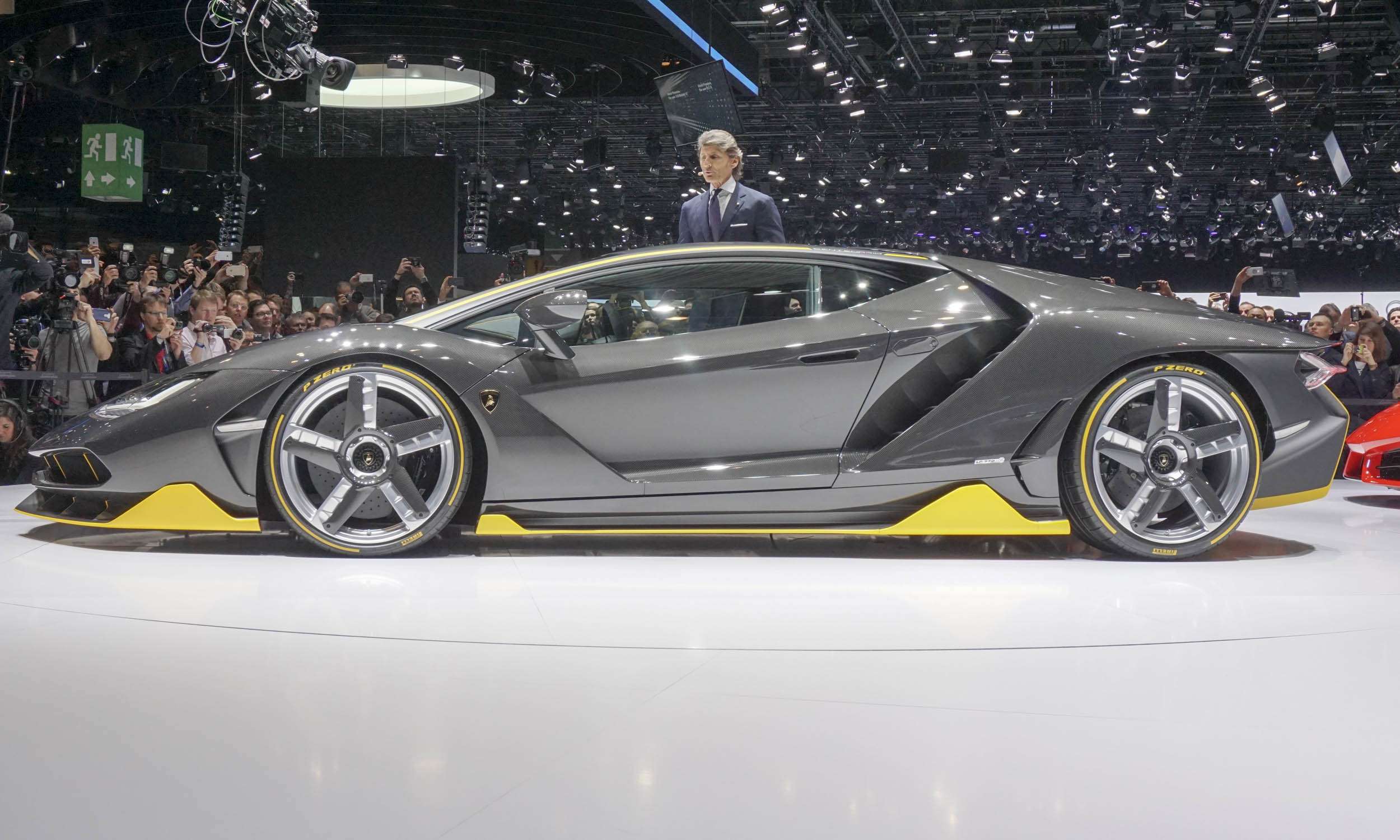 Fitting Tribute
“The Centenario is a car that perfectly combines tradition and innovation. It looks to the future while honoring the legend that is Ferruccio Lamborghini,” says Automobili Lamborghini President and CEO Stephan Winkelmann. “It is the most fitting tribute to Ferruccio Lamborghini in his centenary year: a man who created an exceptional brand, believed that anything was possible, and produced extraordinary, iconic cars. The Centenario is a super sports car for Ferruccio Lamborghini and the future he and we believe in today,” notes Winkelman, who will soon leave his post at Lambo to head quattro GmbH, a wholly-owned subsidiary of Audi AG, which is part of the Volkswagen Group (which also owns Lamborghini). 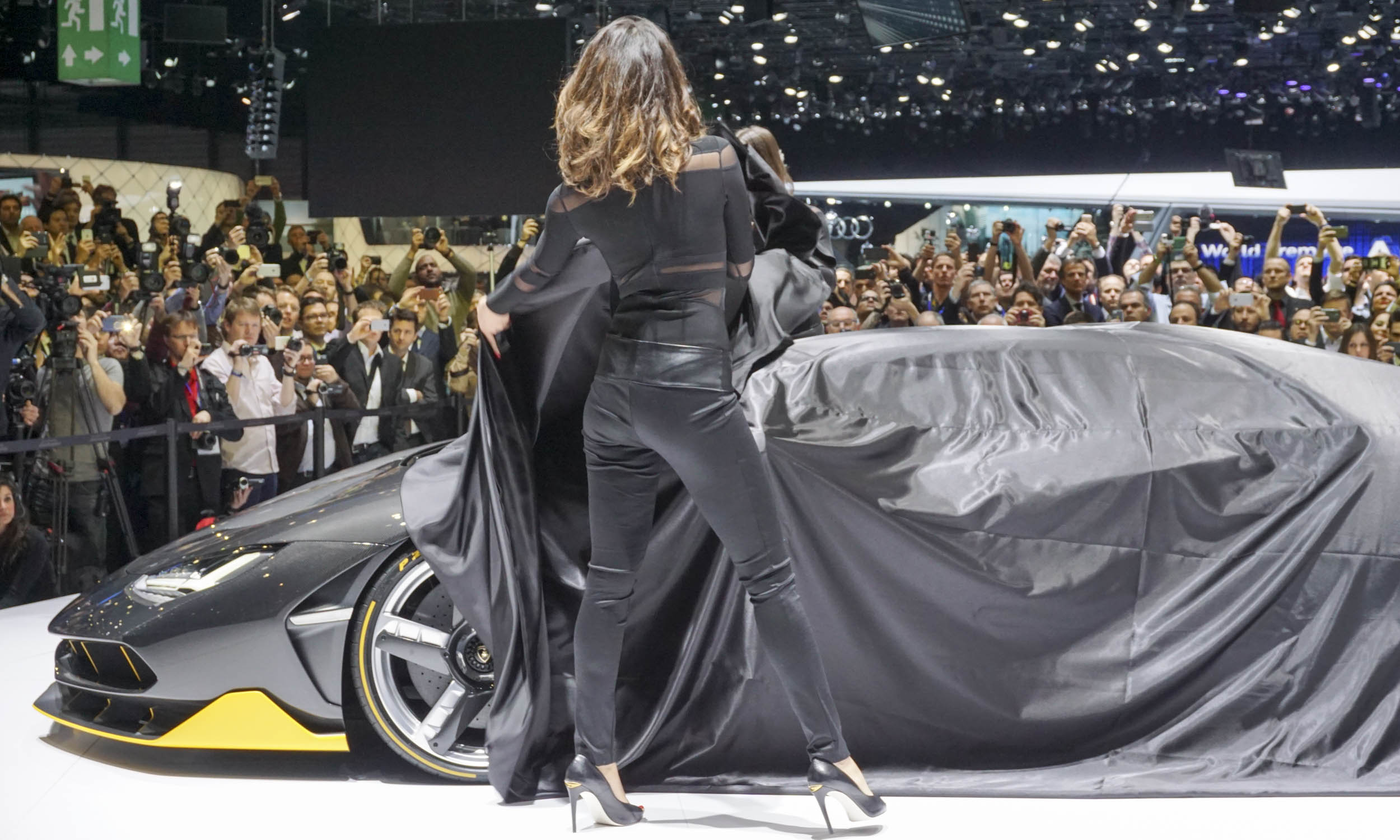 No Ordinary Lambo
As expected, this is no ordinary Lamborghini — as if there ever were such a thing. The Centenario will be built in very limited numbers — just 20 coupes and 20 roadsters will be produced — and follows other special one-off models such as the Reventon, Sesto Elemento, Aventador J and Veneno. 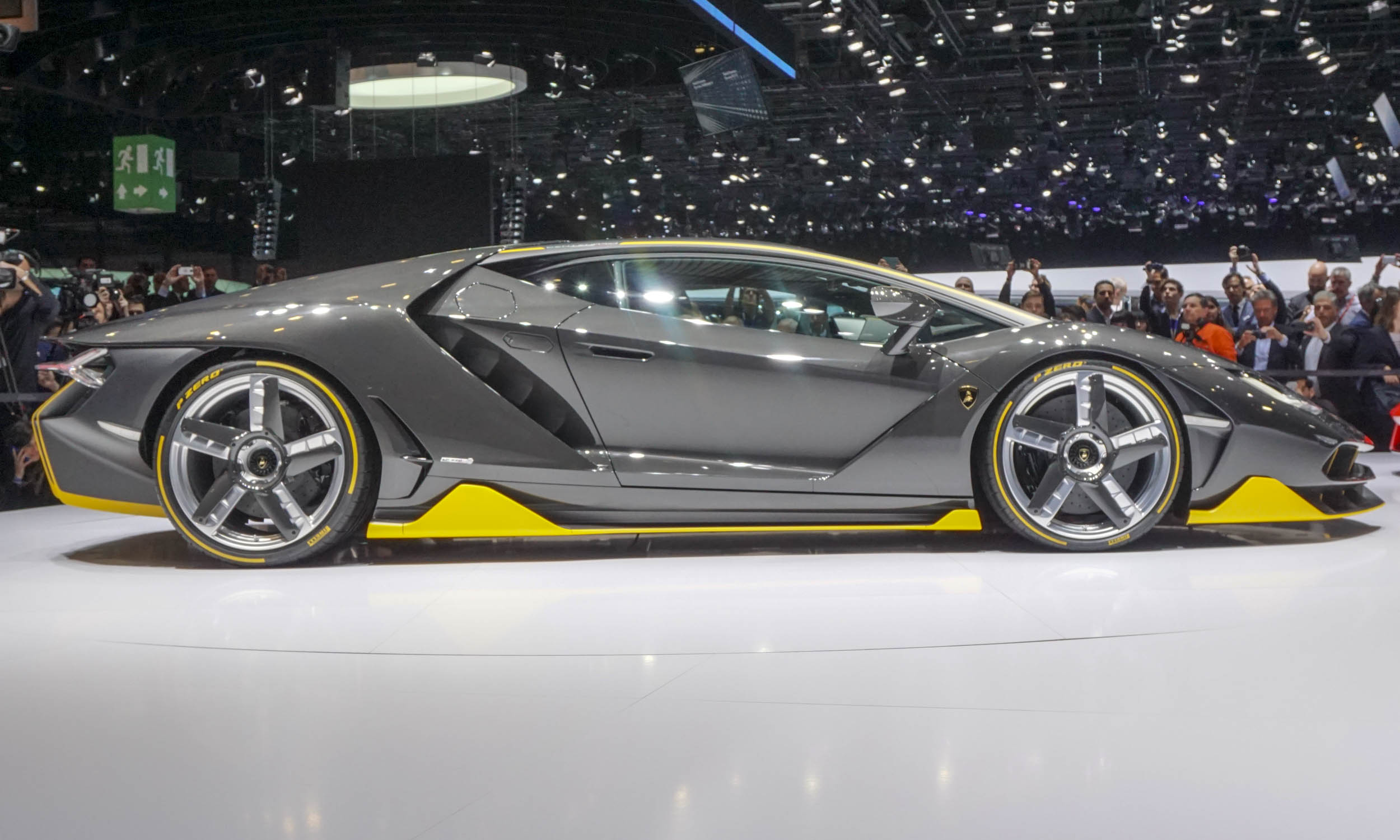 You Can’t Have One
The Centenario is priced at 1.75 million euros, but don’t start placing your order — all 40 of these special Lamborghinis have already been spoken for. 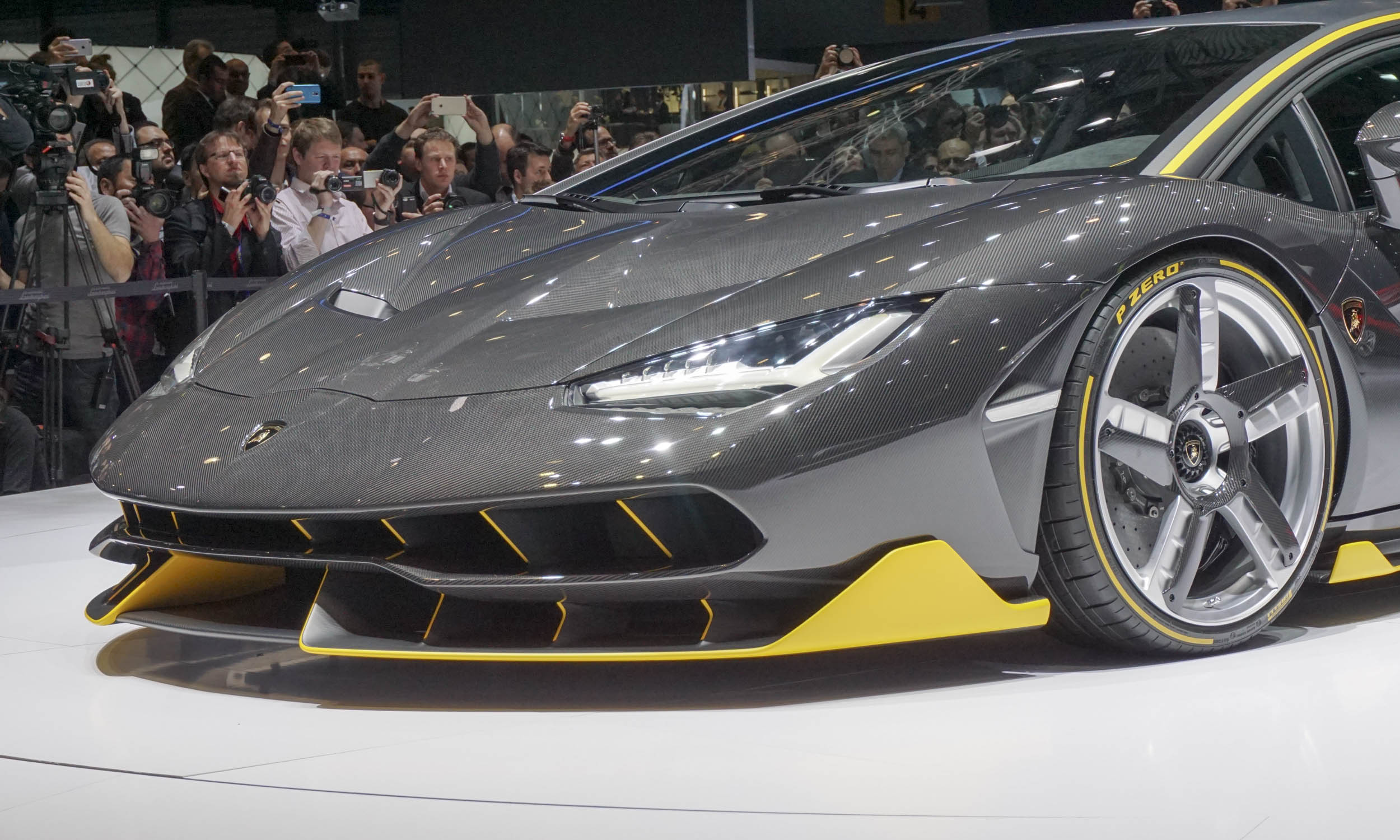 Aero
Low and wide, this one-off Lamborghini looks as if it’s flying even when standing still. As with other V12 models, the Centenario features signature scissor doors. There are vents and air intakes everywhere. Airflow is optimized to improve downforce as well as engine and brake cooling. 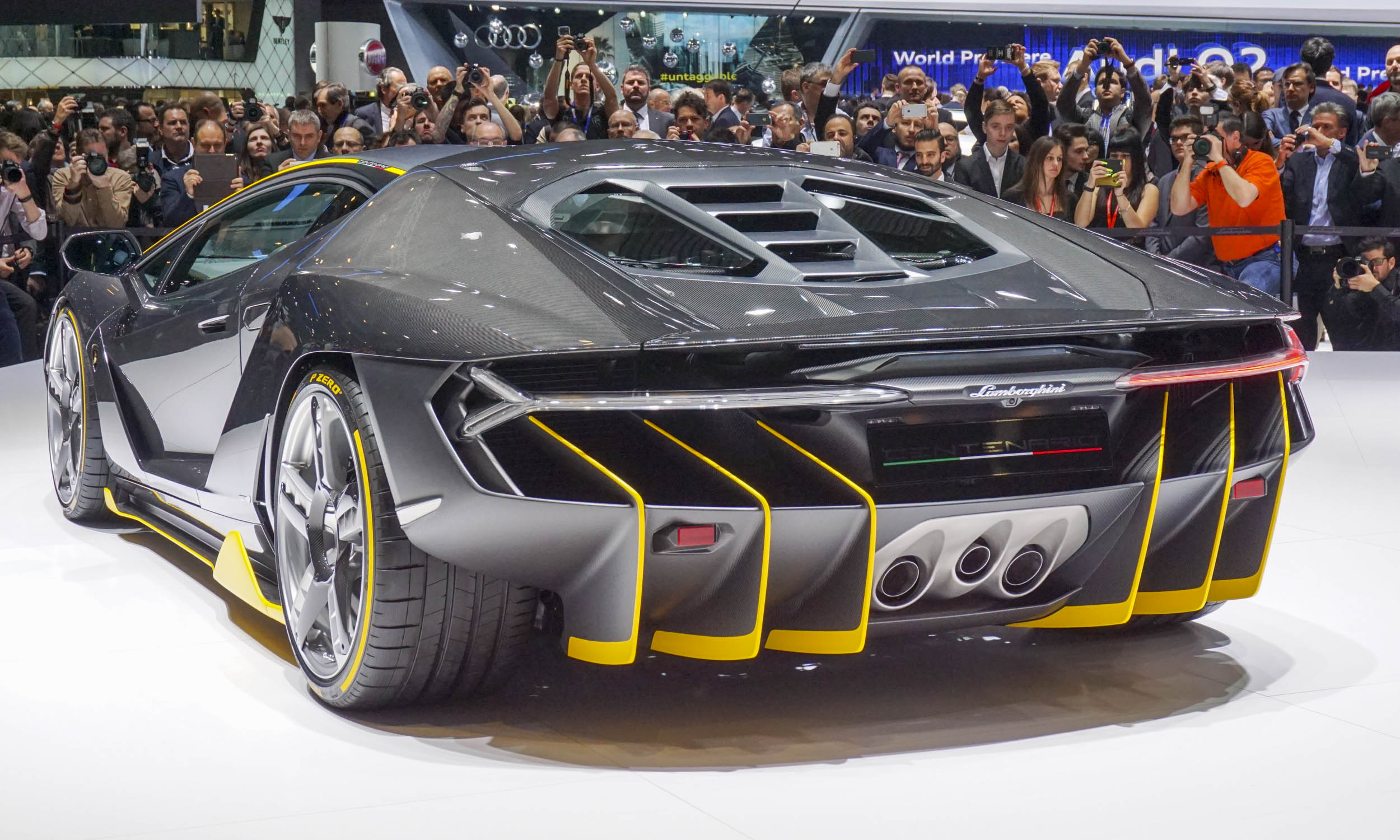 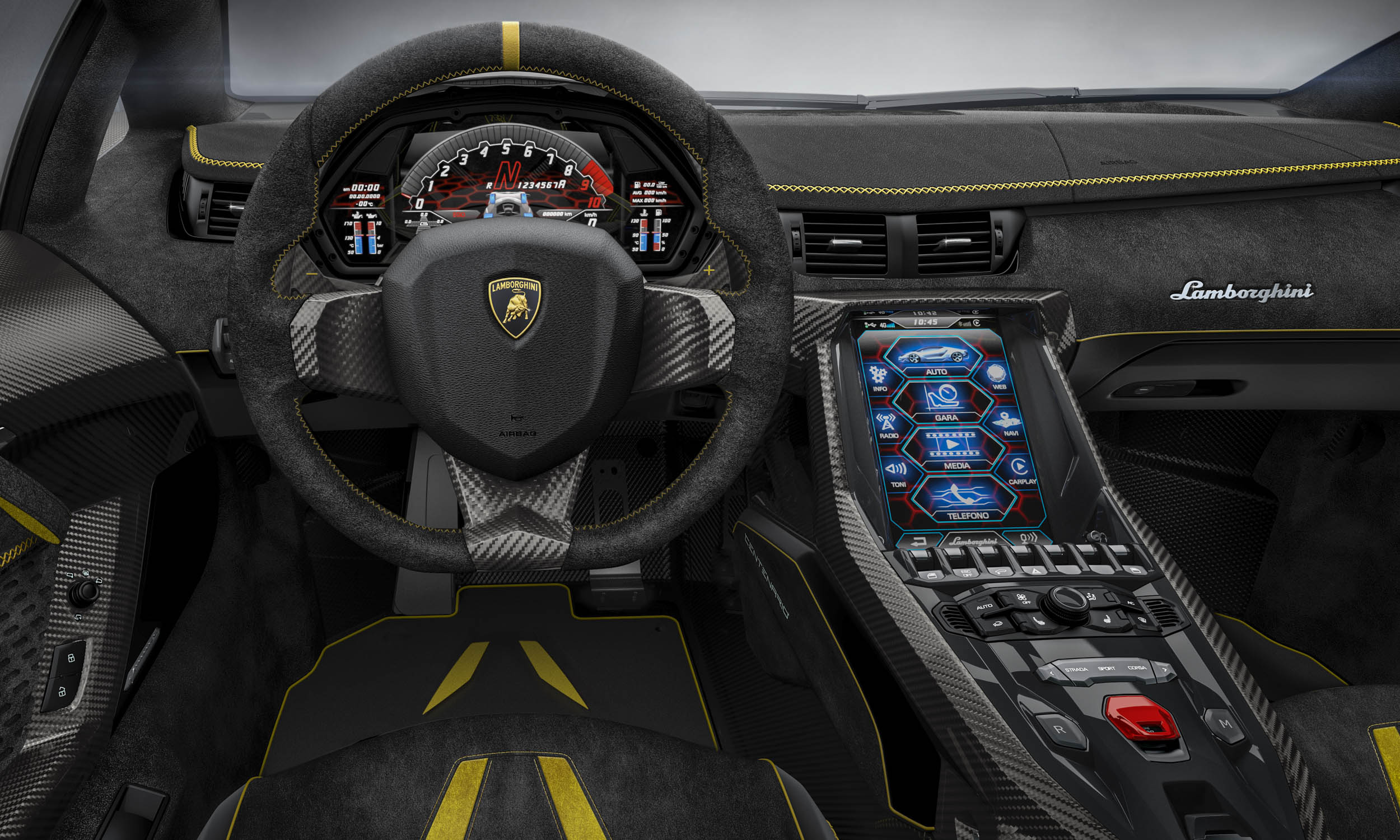 Luxurious Interior
Inside are lightweight carbon-fiber sport seats with all surfaces covered in Alcantara or carbon fiber. The Centenario features a 10.1-inch touchscreen with Internet functionality as well as Apple CarPlay iPhone integration. 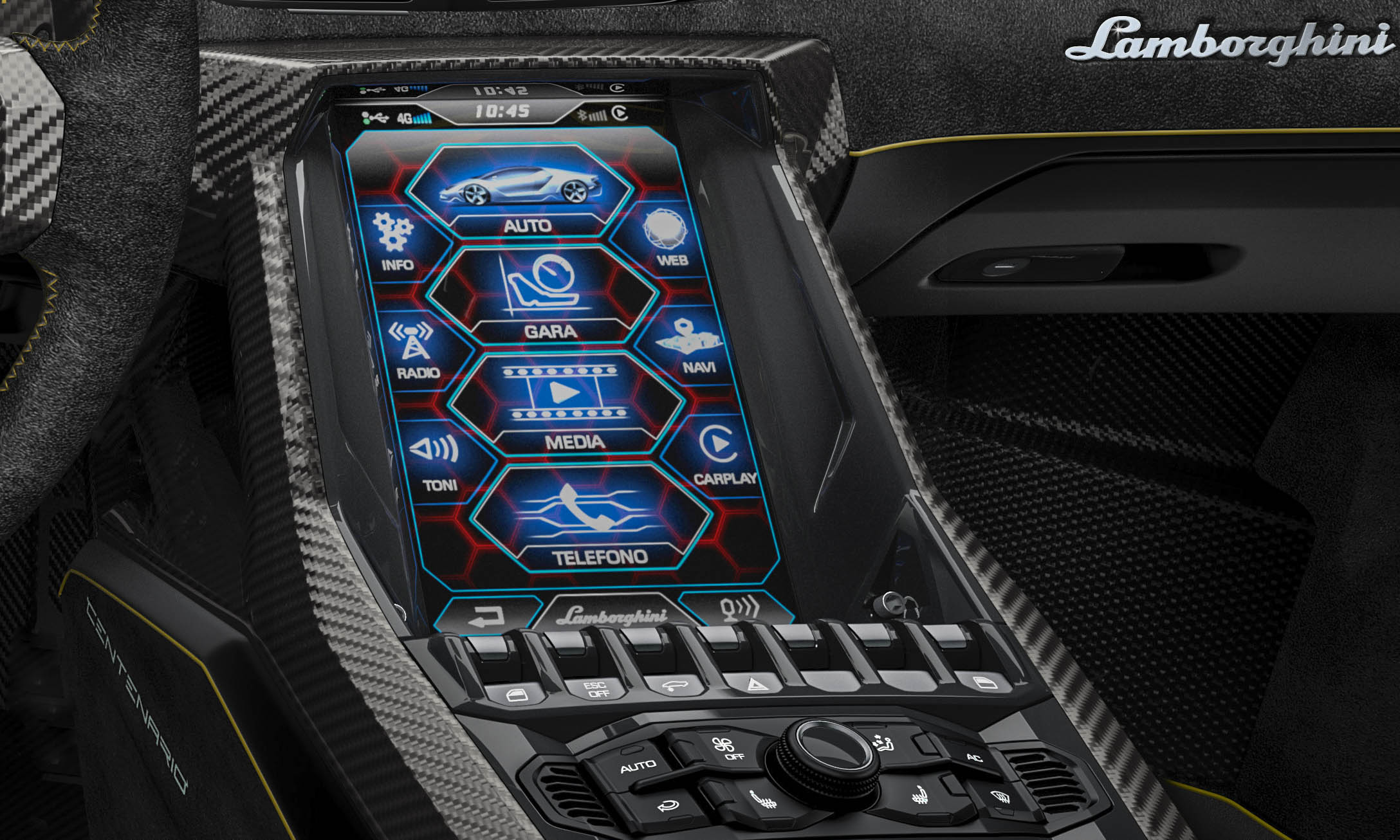 Telemetry
The infotainment system also includes a telemetry display that shows speed, track times, and lateral g-forces that can be recorded and compared. Two optional cameras may be installed inside to record track time, and there’s even space in the forward trunk for two helmets. 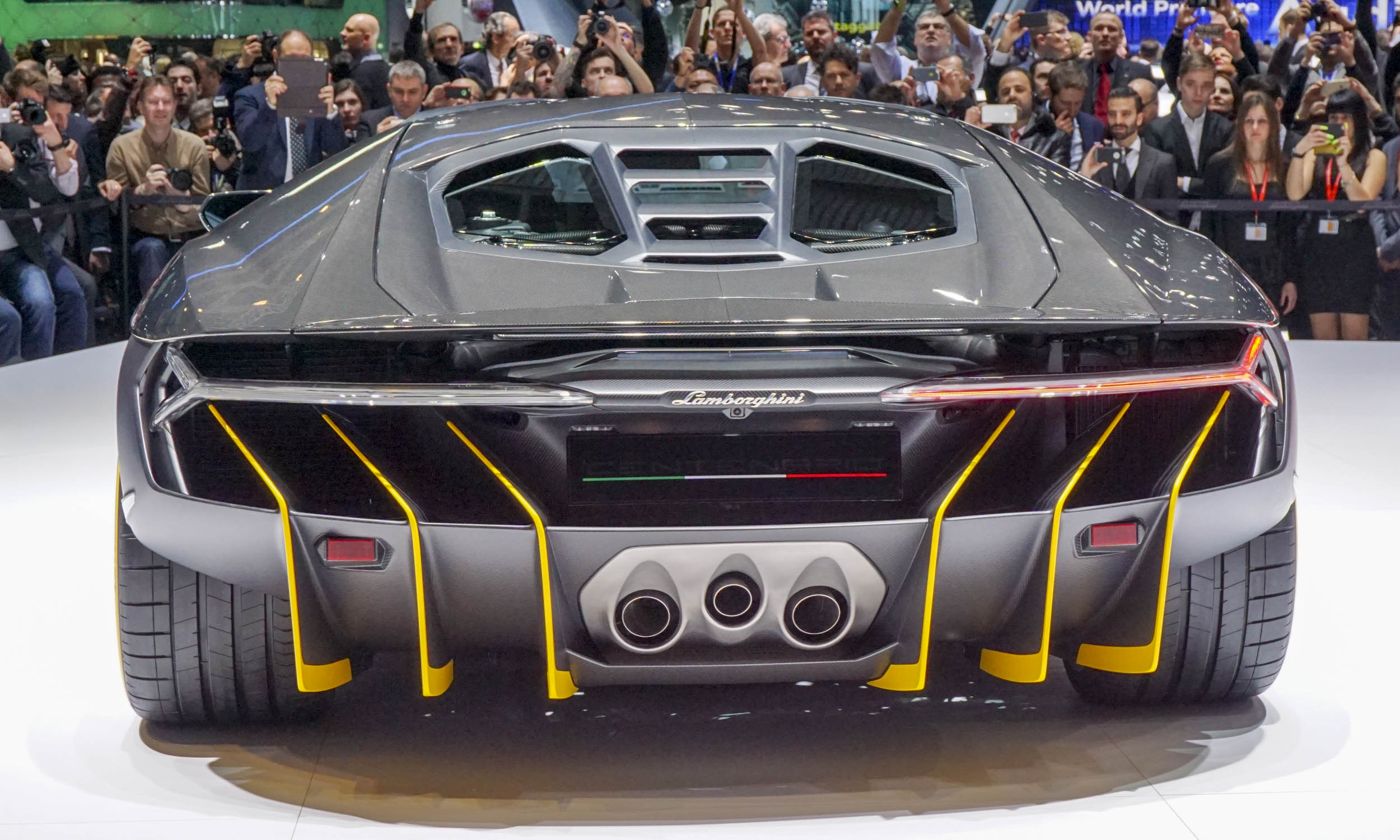 Most Powerful Lambo Ever
While this Centenario would stand out in any crowd of exotic supercars, it is more than just a pretty (or mean-looking) face. Under that clear cover behind the cockpit is a 770-horsepower V12 engine —the most powerful engine Lamborghini has ever produced. 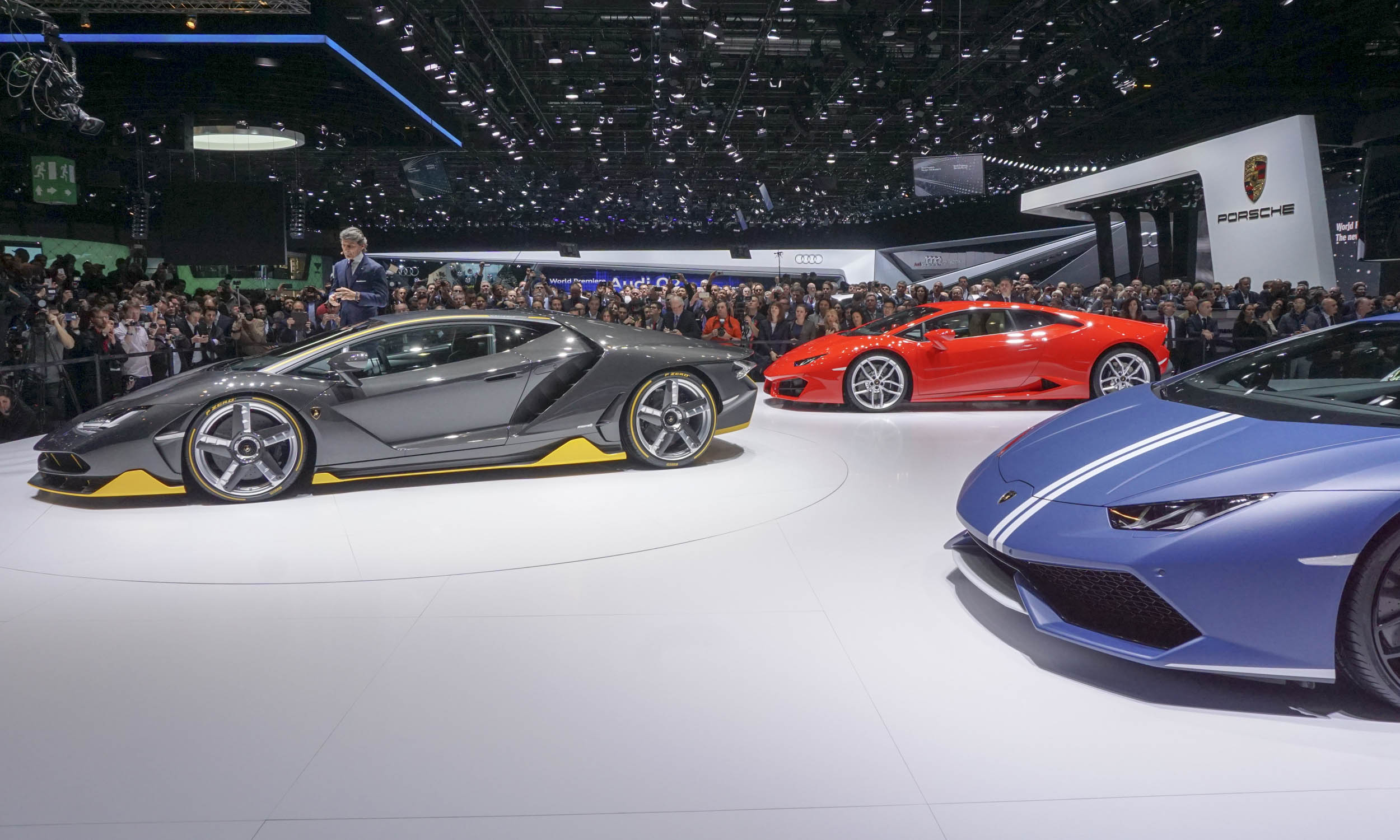 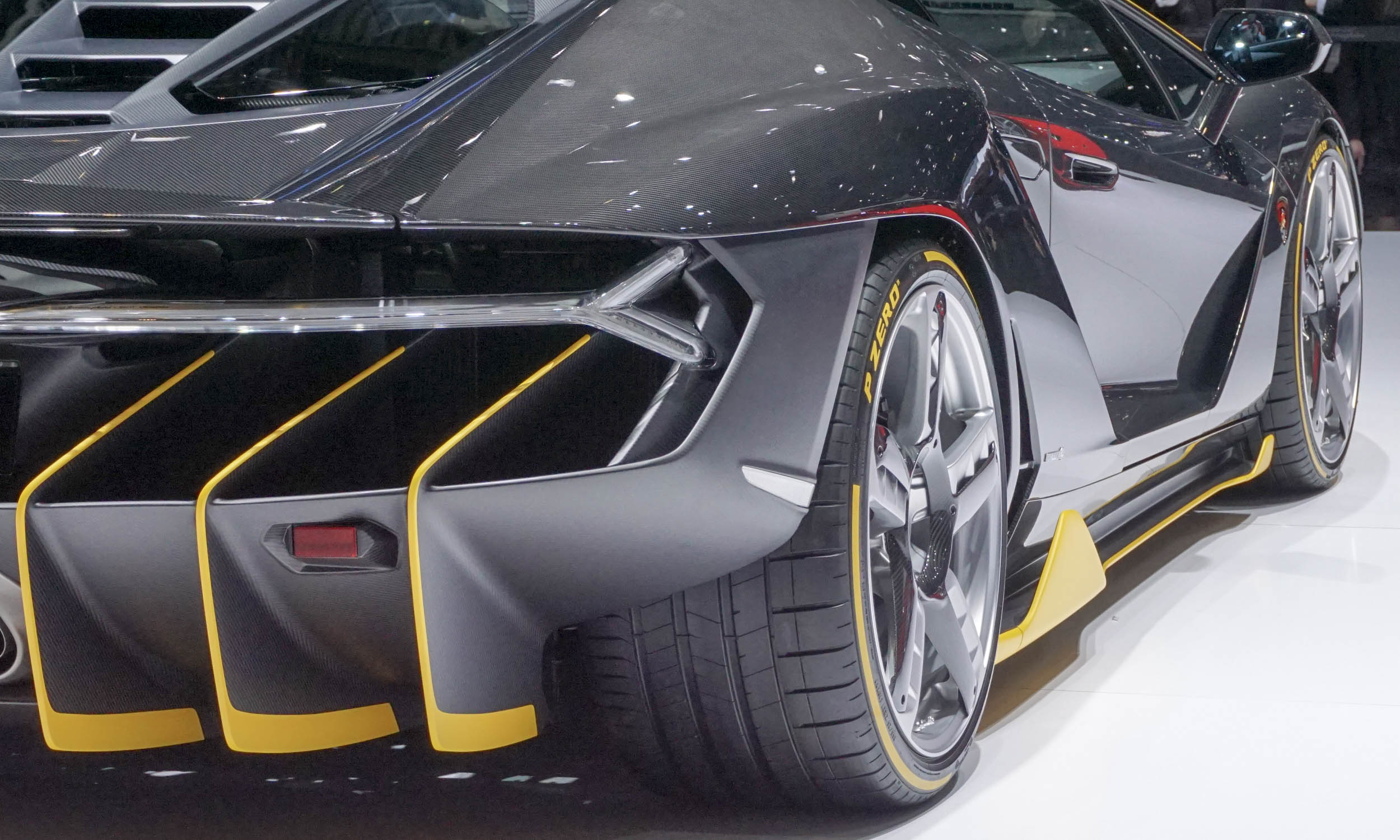 Stability and Handling
All that Centenario power gets harnessed through a permanent all-wheel-drive system. The Centenario also introduces a new rear-wheel-steering system for improved handling. At low speeds the rear wheels turn opposite the front, to provide better maneuverability and a reduced turning radius. At high speeds all four wheels turn in the same direction for increased stability. 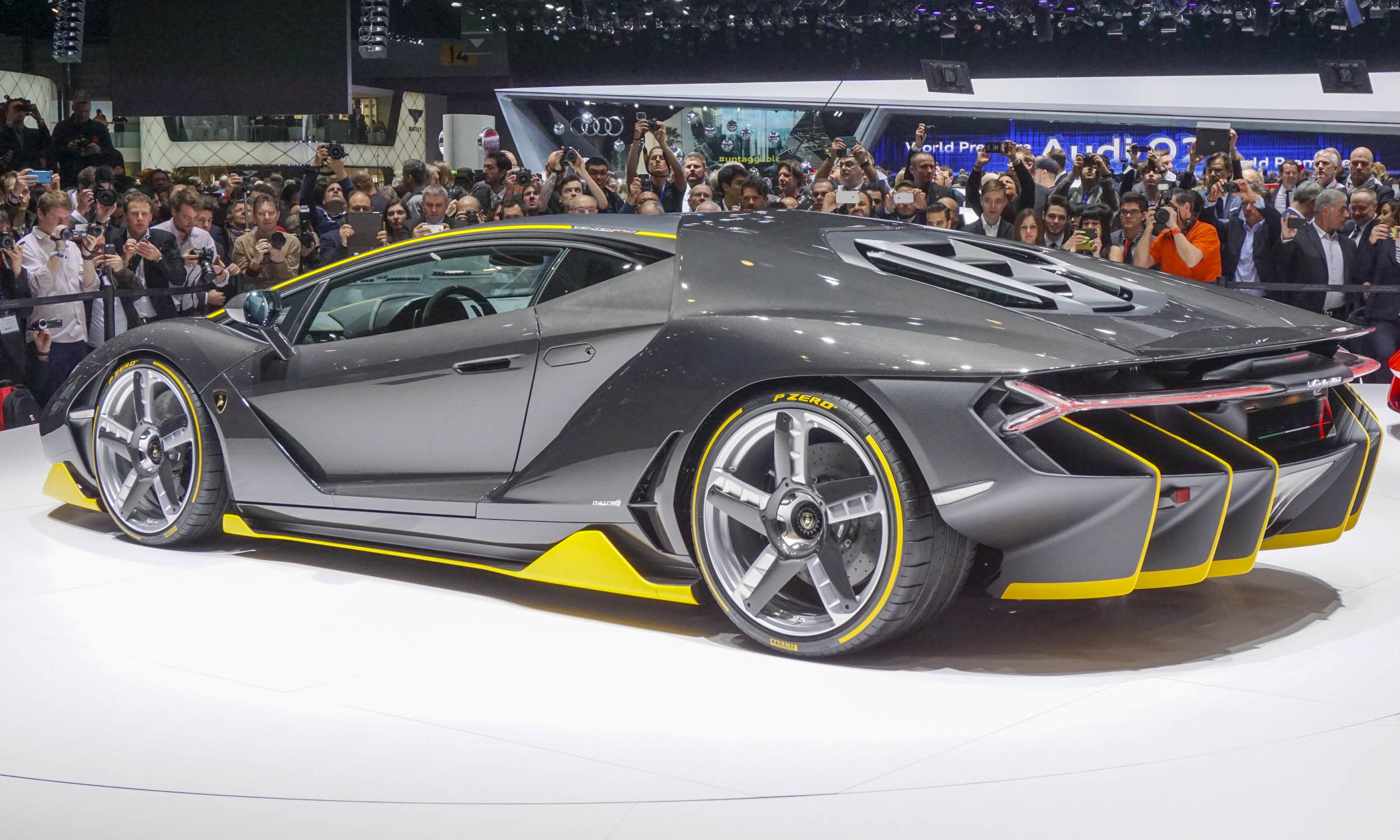 Customizable
Deliveries of the Centenario will begin this fall. While the car shown in Geneva features a carbon-fiber finish, clients may specify their Centenario to include exposed carbon fiber or any color and finish from Lamborghini’s personalization program.