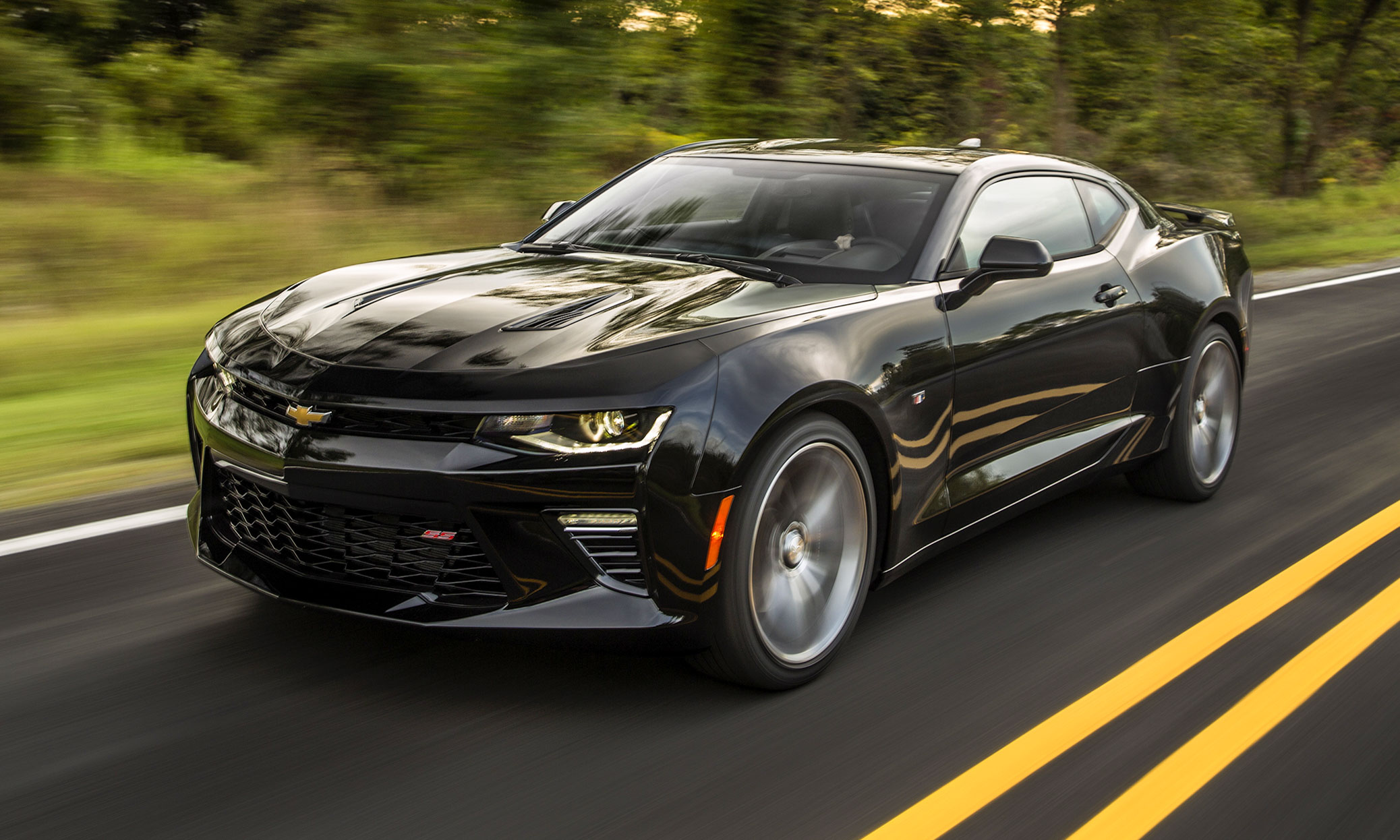 © General Motors
Chevrolet Camaro
One of the most recognized cars of all time, the Chevrolet Camaro debuted as a 1967 model and was soon battling for the hearts and dollars of American baby boomers against the car that would become its archrival — the Ford Mustang. The Camaro and Mustang became leaders in the segment of sporty 2-door coupes that developed in the late 1960s and would eventually be called “pony cars.” For nearly 50 years Camaros have been haunting highways and blazing down backstreets of America, although the model has been in and out of production during the last half century. 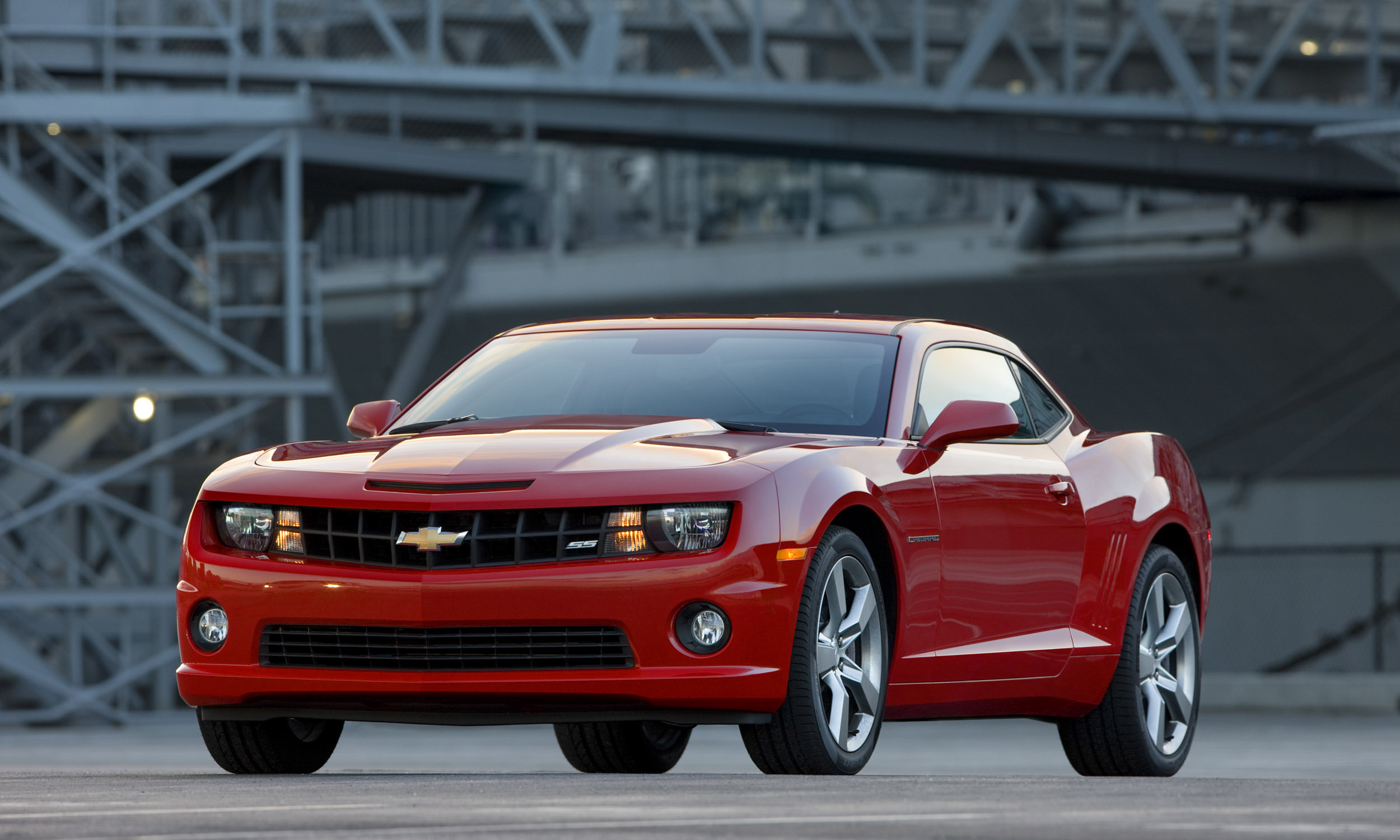 © General Motors
Camaro Returns
When Camaro returned to the Chevrolet lineup in 2009 as a 2010 model after a seven-year absence, the battle with Mustang resumed with a vengeance. Drawing its styling heavily from the first generation (1967–69) Camaro — particularly the 1969 version, which many Camaro lovers consider the most iconic Camaro design of all — the return was a success and Camaro outsold Mustang for five straight years from 2010–2014, with more than 500,000 sold in the U.S. By 2015 the time had come for Camaro to move forward with an updated look, a more sophisticated chassis and new technology. 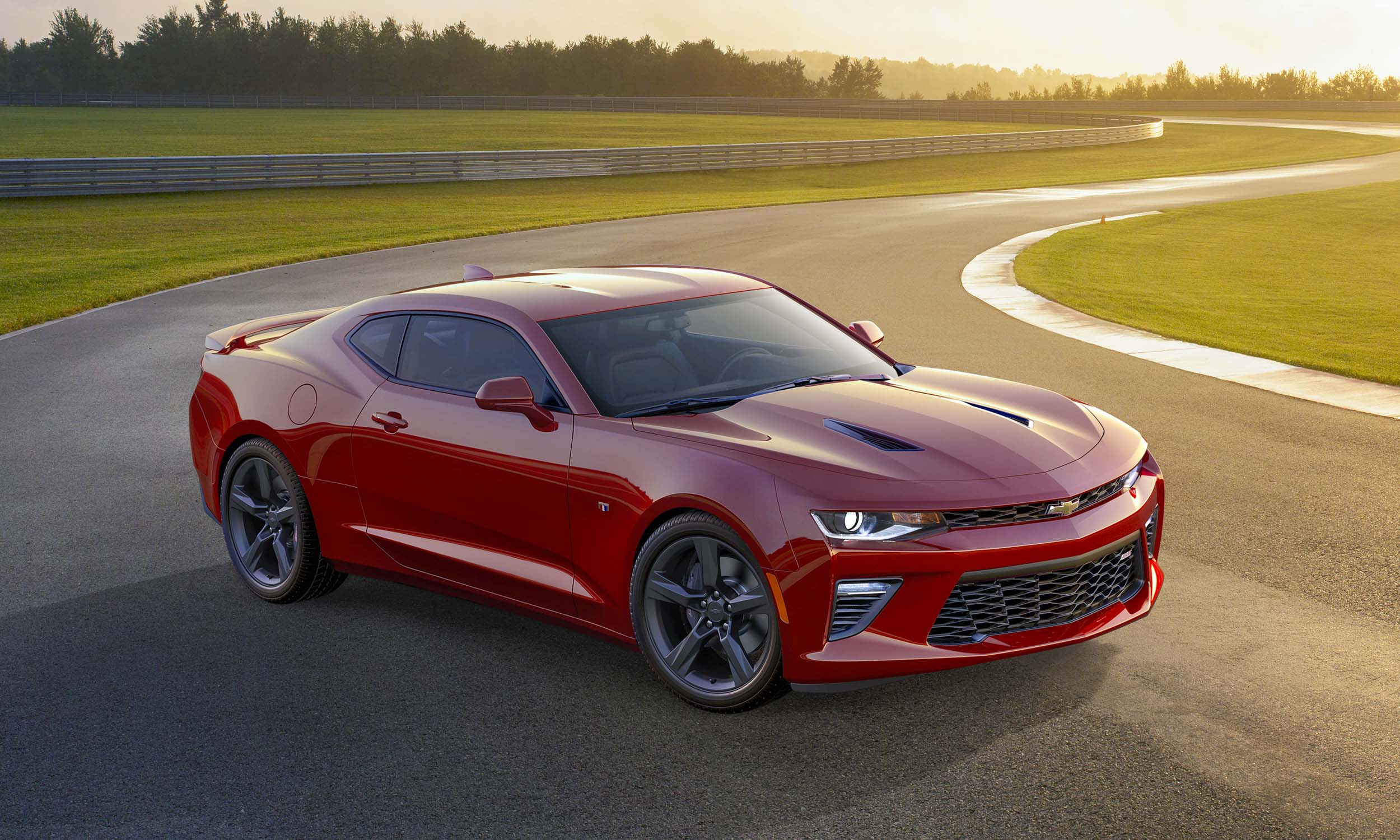 © General Motors
New Design
The new Camaro design is more sculpted and taut, which makes the new car look lower and wider than the previous model. “From every angle, you’ll never mistake this for anything but a Camaro,” said Tom Peters, design director for General Motors. “We’ve taken that iconic design and amplified its proportions to reflect a more dynamic driving experience.” The design is actually slightly smaller than its predecessor; it loses 2.3 inches in overall length as well as 1.6 inches from the wheelbase (the distance between the axles). The 2016 model is also slightly narrower and more aerodynamic, reducing drag on the LT and adding downforce on the SS. While Camaro continues to reflect historic cues, the design team — led by Peters — also works on the Corvette, so it’s no coincidence that some Corvette influences show up in the new Camaro design. 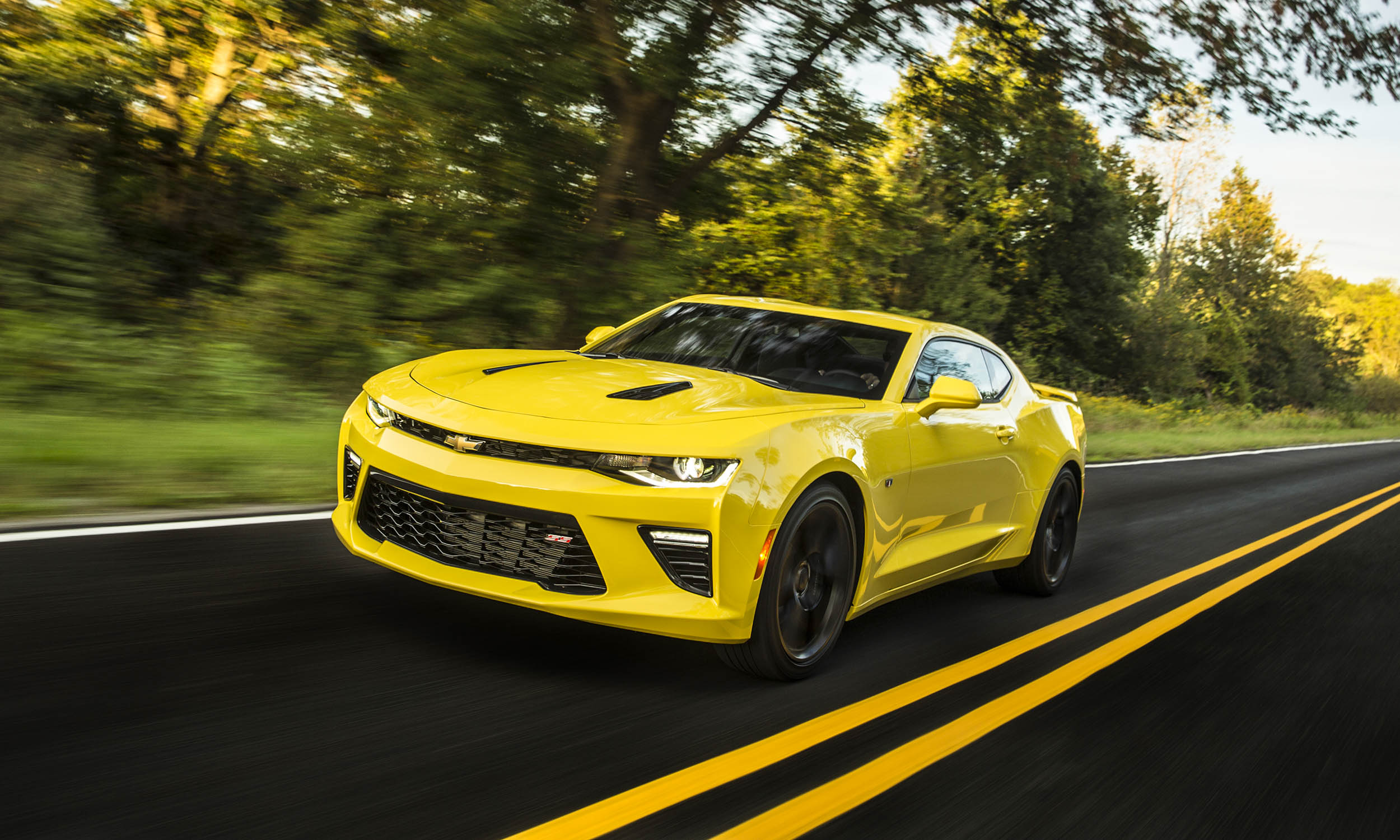 © General Motors
New Architecture
Built on a new platform shared with the Cadillac ATS, the 2016 Camaro chassis is 28 percent stiffer than the previous model; the more rigid structure allows more precise suspension tuning, which refines both ride and handling. The 2016 model is also lighter, with the Camaro LT 2.0-liter coming in 390 pounds lighter than the outgoing LT V6; the new LT V6 is 294 pounds less. Even the Camaro SS comes in 223 pounds less than the 2015 model. The front suspension is Macpherson-type with twin-tube struts and a direct-acting stabilizer bar; the rear suspension is independent five-link with twin-tube shocks, and the steering is rack-mounted electric variable power assist. 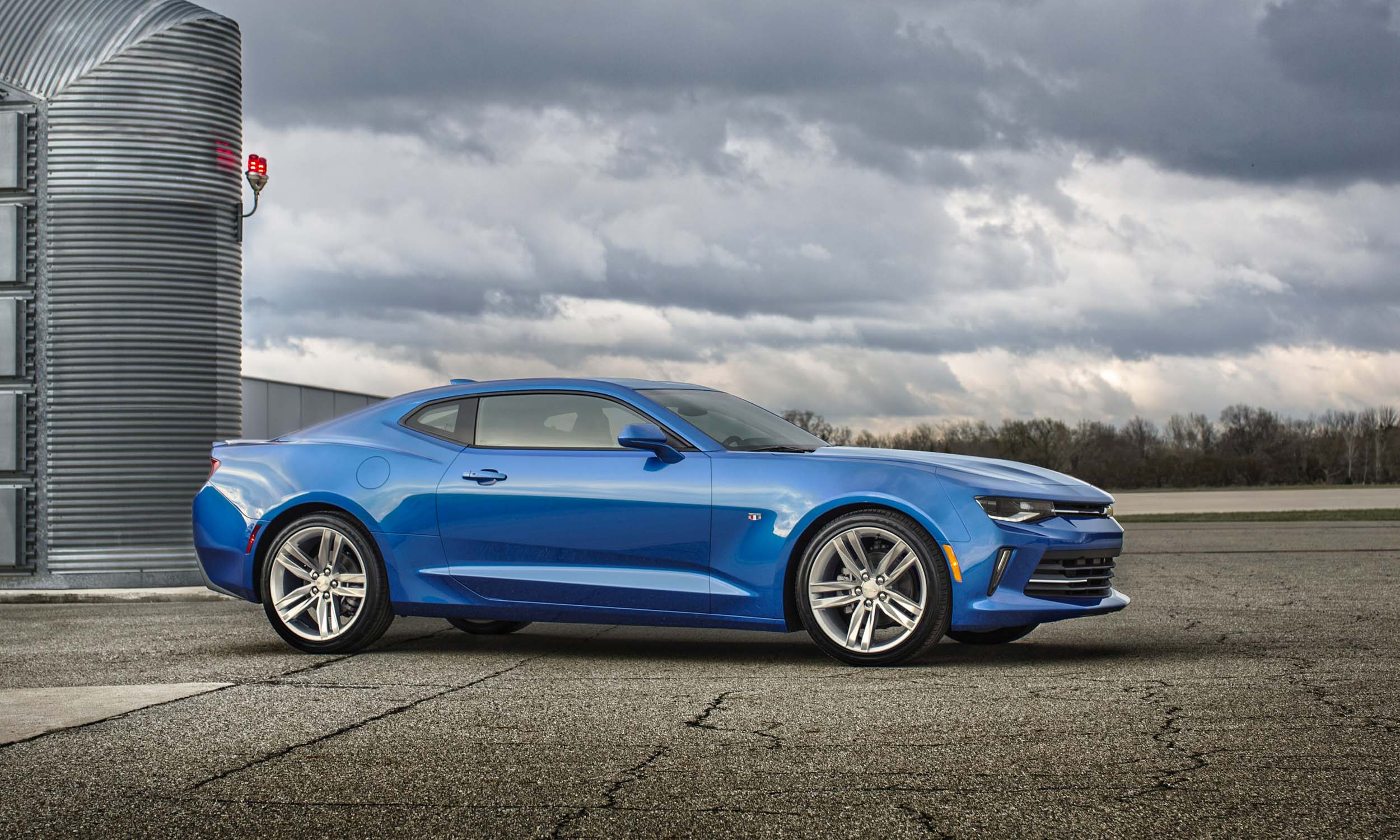 http://www.wsj.com/articles/henrik-fisker-sues-aston-martin-for-100-million-in-damages-1451942419
Model Lineup
Available initially as a coupe, followed by the convertible later in the model year, the 2016 Camaro is offered in LT and SS models with two trim levels for each model, and the RS package offered for the LT. A new 275-horsepower 2.0-liter turbocharged four cylinder is the standard engine for LT, with a new direct-injected 335-horsepower 3.6-liter V6 engine optional. The SS is powered by the 455-horsepower 6.2-liter LT1 small-block V8 engine introduced on the Corvette. Camaro LT starts at $26,695 with the 2.0-liter Turbo and $28,190 with the 3.6-liter V6, including destination charges. The Camaro SS starts at $37,395 including destination charges. 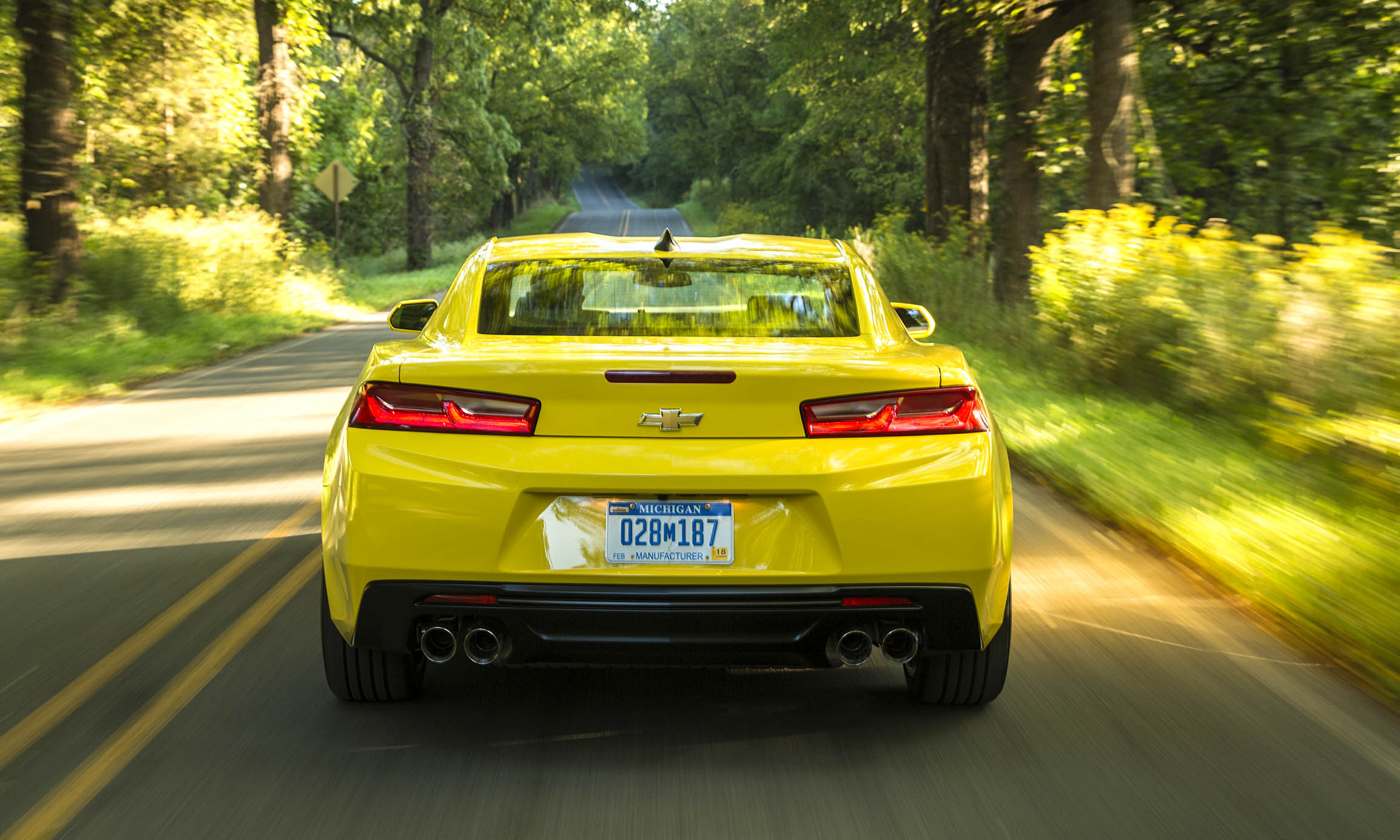 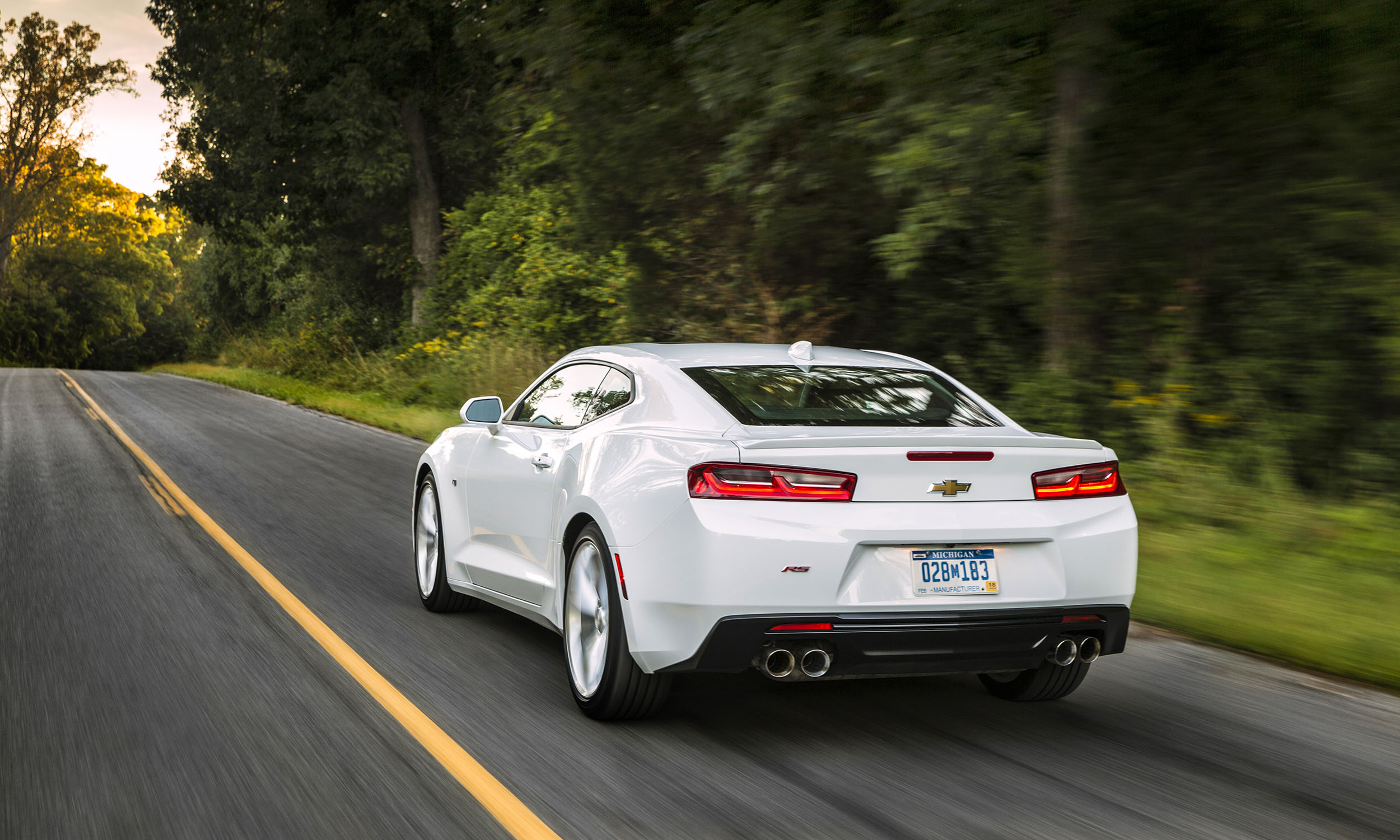 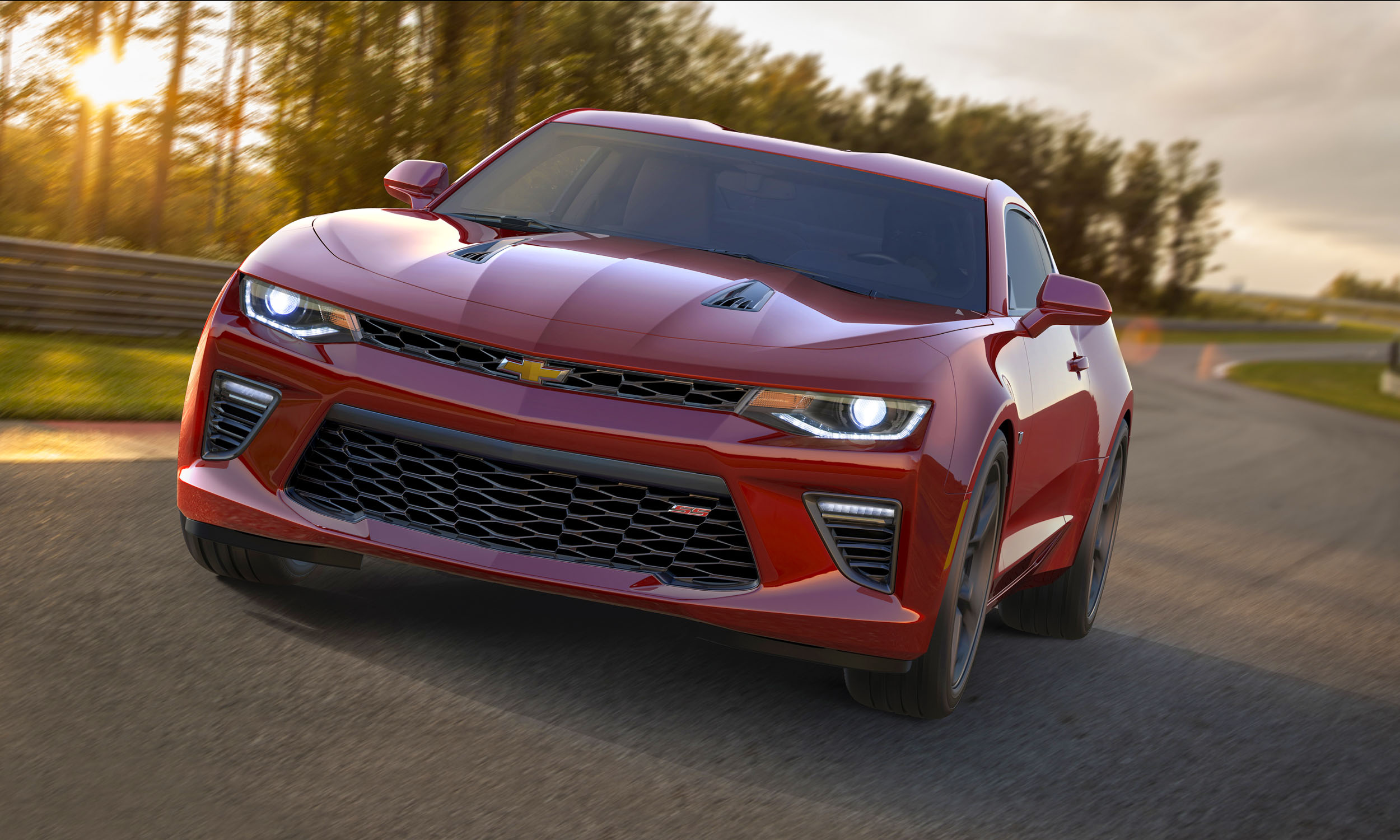 © General Motors
Camaro SS
The Camaro SS is powered by the new 6.2-liter V8 engine with about 20 percent of the components specific to the Camaro, including the tri-Y exhaust manifolds and either a 6-speed manual with Active Rev Match or an 8-speed automatic transmission with paddle-shift manual mode. The SS can be distinguished by its aero-optimized front grilles, hood vents, rear spoiler and 20-inch aluminum wheels. Camaro SS standard equipment includes a Driver Information Center with an 8-inch color configurable display, HID headlights, Brembo brakes, a limited-slip differential, performance suspension, Active Rev Matching with the 6-speed manual, an additional Track mode for the Drive Mode Selector, and available Magnetic Ride Control suspension. 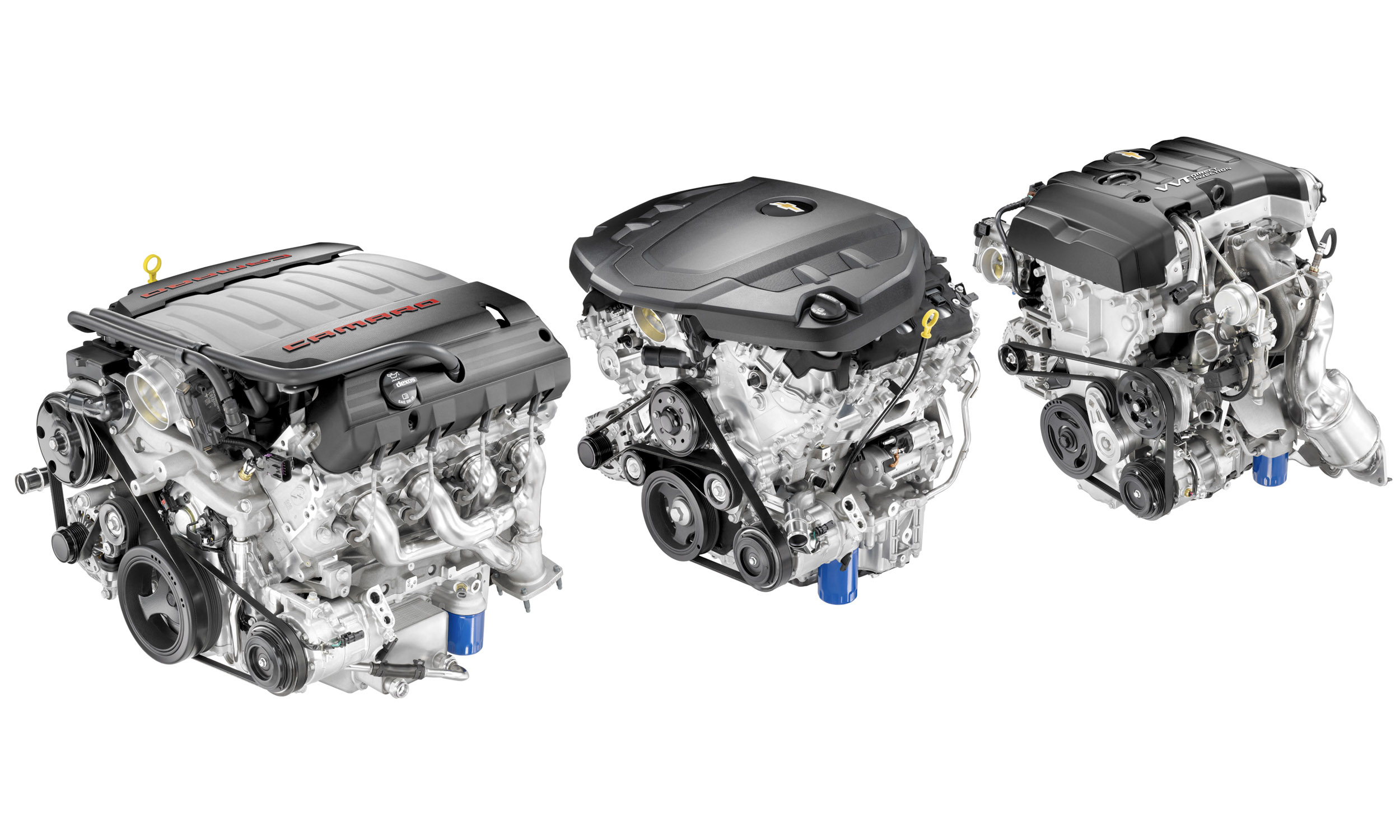 © General Motors
Under the Hood
The new 2016 Camaro is offered with three new engines and six powertrain combinations, with each engine combined with either a 6-speed manual transmission or an 8-speed paddle-shift automatic. The new standard engine for the Camaro LT is a 2.0-liter turbocharged four cylinder that is SAE-certified to produce 275 horsepower and 295 lb-ft of torque with 90 percent of peak torque available at 2100 rpm and maximum torque from 3000 to 4500 rpm. With this engine, the Camaro LT is expected to accelerate from zero to 60 mph in less than 6 seconds and achieve more than 30 mpg on the highway. The new optional 3.6-liter V6 produces an SAE-certified 335 horsepower and 284 lb-ft of torque and incorporates direct injection, variable valve timing and Active Cylinder Management. The Camaro SS receives the new 6.2-liter LT1 small-block V8 certified at 455 horsepower and 455 lb-ft of torque with variable valve timing, direct injection and Active Fuel Management. 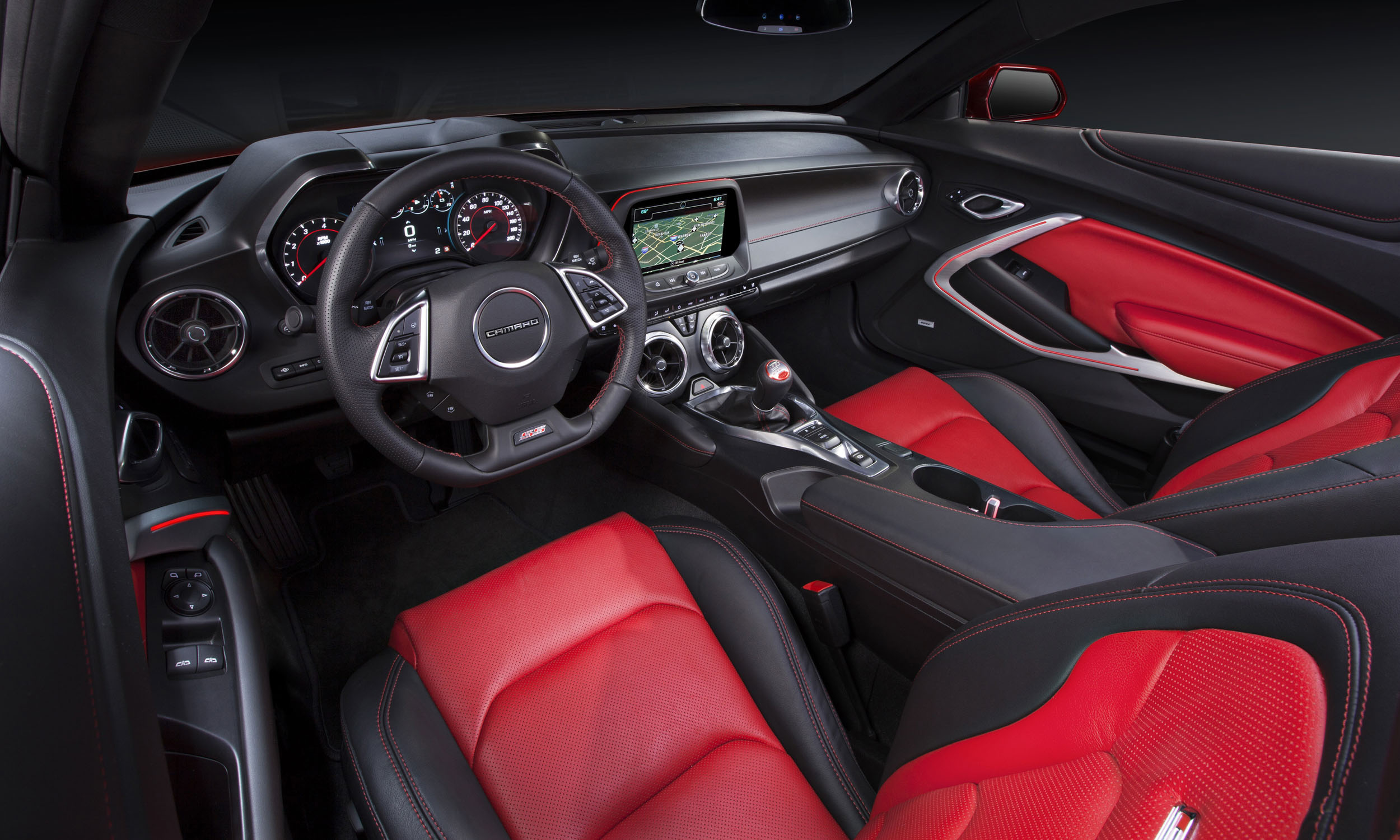 © General Motors
Inner Space
The 2016 Camaro interior receives the same sculpting and attention to detail as the exterior, retaining the signature dual-binnacle instrument hood with analog instruments and an available 8-inch high-definition center screen that can be configured to include navigation, infotainment or performance data. The top of the dash wraps into the door panels, enveloping the driver and front-seat passenger. The center console can be reconfigured and the cupholders moved for ease of shifting with the manual transmission. The outer rings of the two central vents control air temperature and speed, with a row of buttons above the vents for other climate-control functions. The optional embroidered Camaro name on the console lid adds a custom touch, but it’s positioned under the driver’s elbow and may wear over time. The available ambient light system gives the driver 24 color choices for lighting the dash, door panels and center console, with preset colors that correspond with the Drive Mode Selector. With the manual transmission, the shift paddles for the automatic transmission are still behind the steering wheel, repurposed as on-off switch for the active rev matching feature. 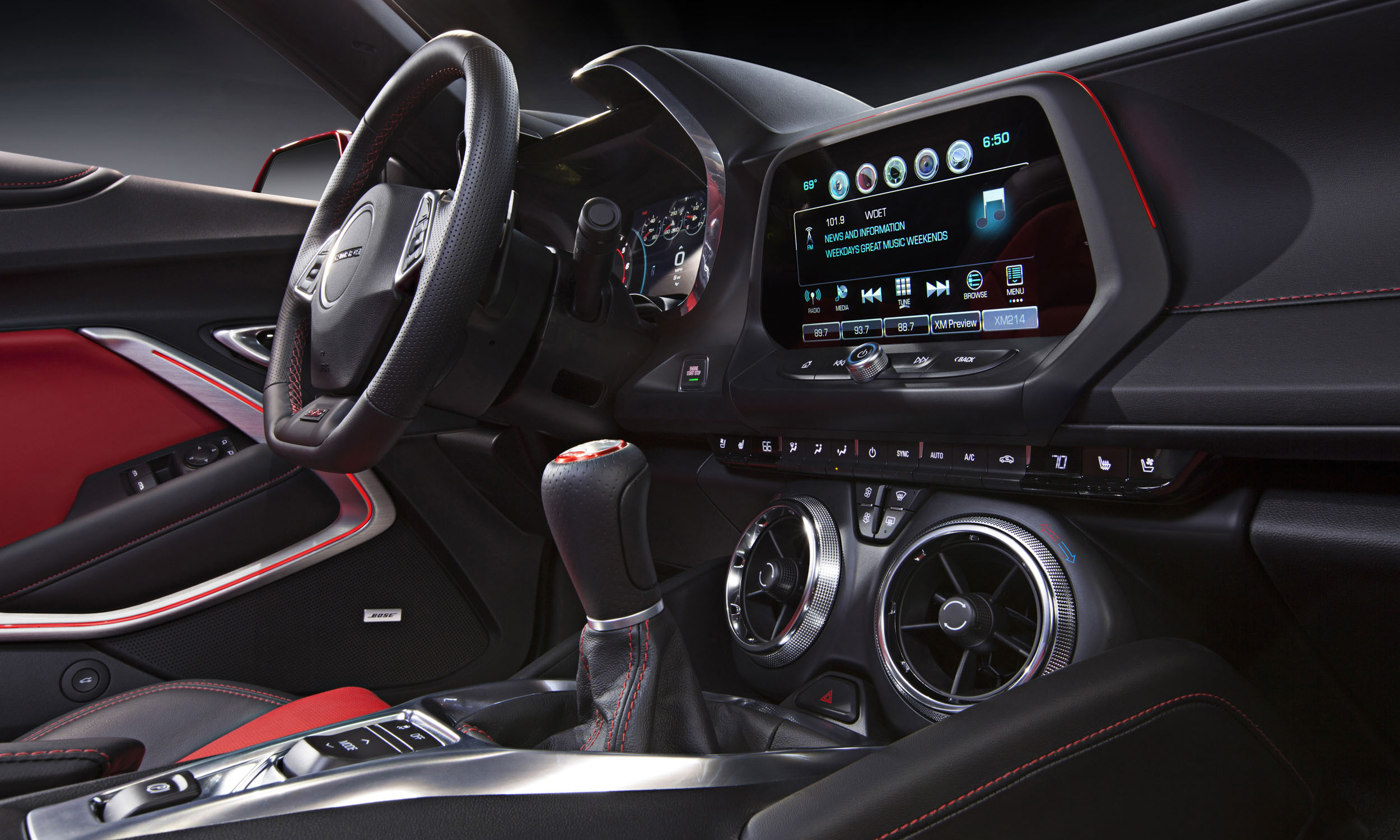 © General Motors
Next-Gen MyLink and OnStar Services
The center of the dash holds an 8-inch touchscreen for the next-generation MyLink with 4G LTE connectivity. It has compatibility with Apple CarPlay and Android Auto. Along the driving route we used the OnStar highway concierge to download turn-by-turn navigation and to find a last-minute hotel in Amarillo, Texas. 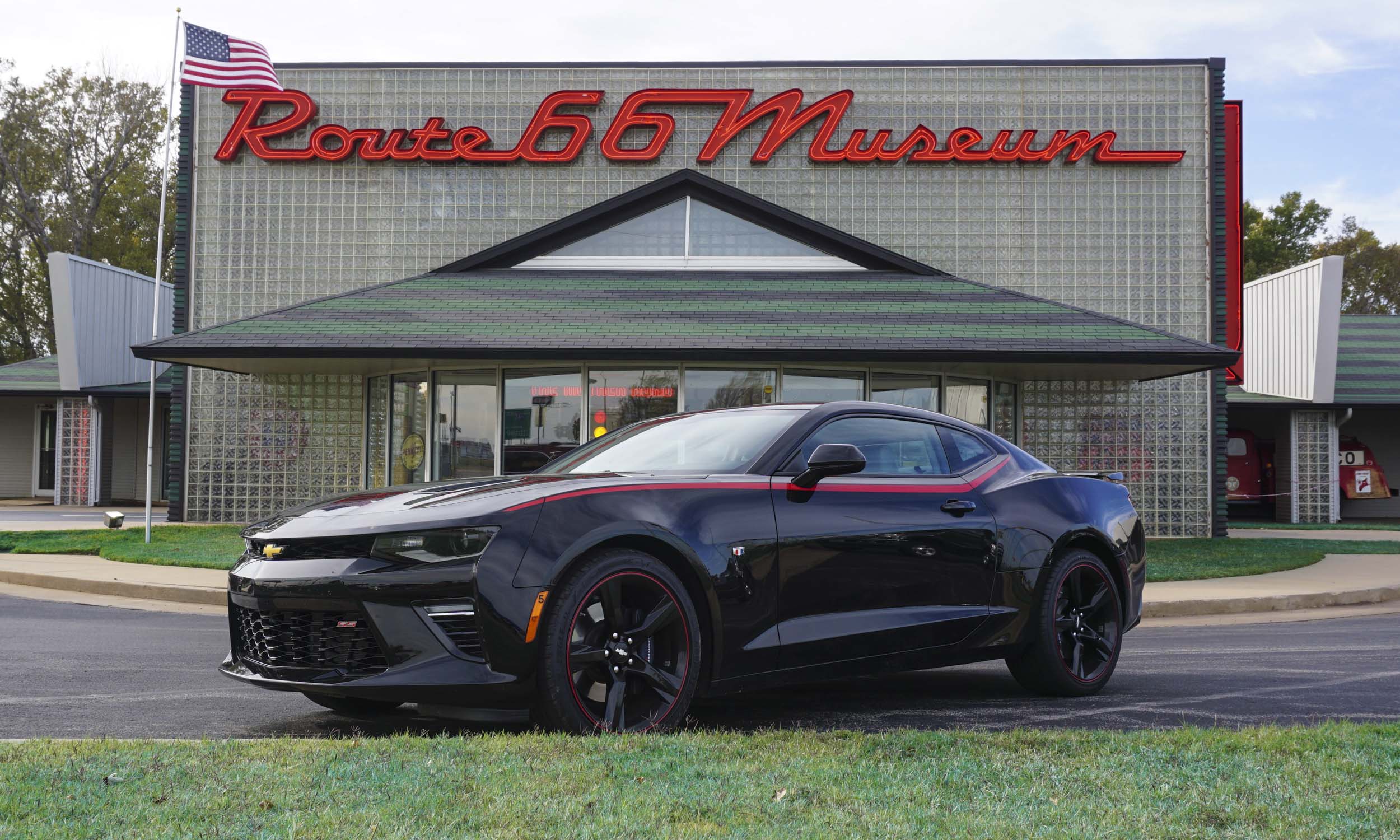 © Mike Meredith
Finding New Roads
Our introduction to the new Camaro was to deliver a black Camaro SS with a 6-speed manual and Magnetic Ride Control from Dallas, Texas, to Albuquerque, New Mexico. Rather than a traditional media drive with a set location and a prescribed drive route, Chevrolet set out to cover all of the 48 lower states from Detroit to the Los Angeles Auto Show with the #FindNewRoads Drive. As we headed out of Dallas, the first stop was at Texas Motor Speedway, but unfortunately no track time with the new Camaro was built into this trip. After a side trip to visit Pops restaurant on Route 66 in Arcadia, Oklahoma, and the Oklahoma Route 66 Museum in Clinton, we had covered more than 800 miles in two days. Plenty of time to fall in love with the new Camaro. 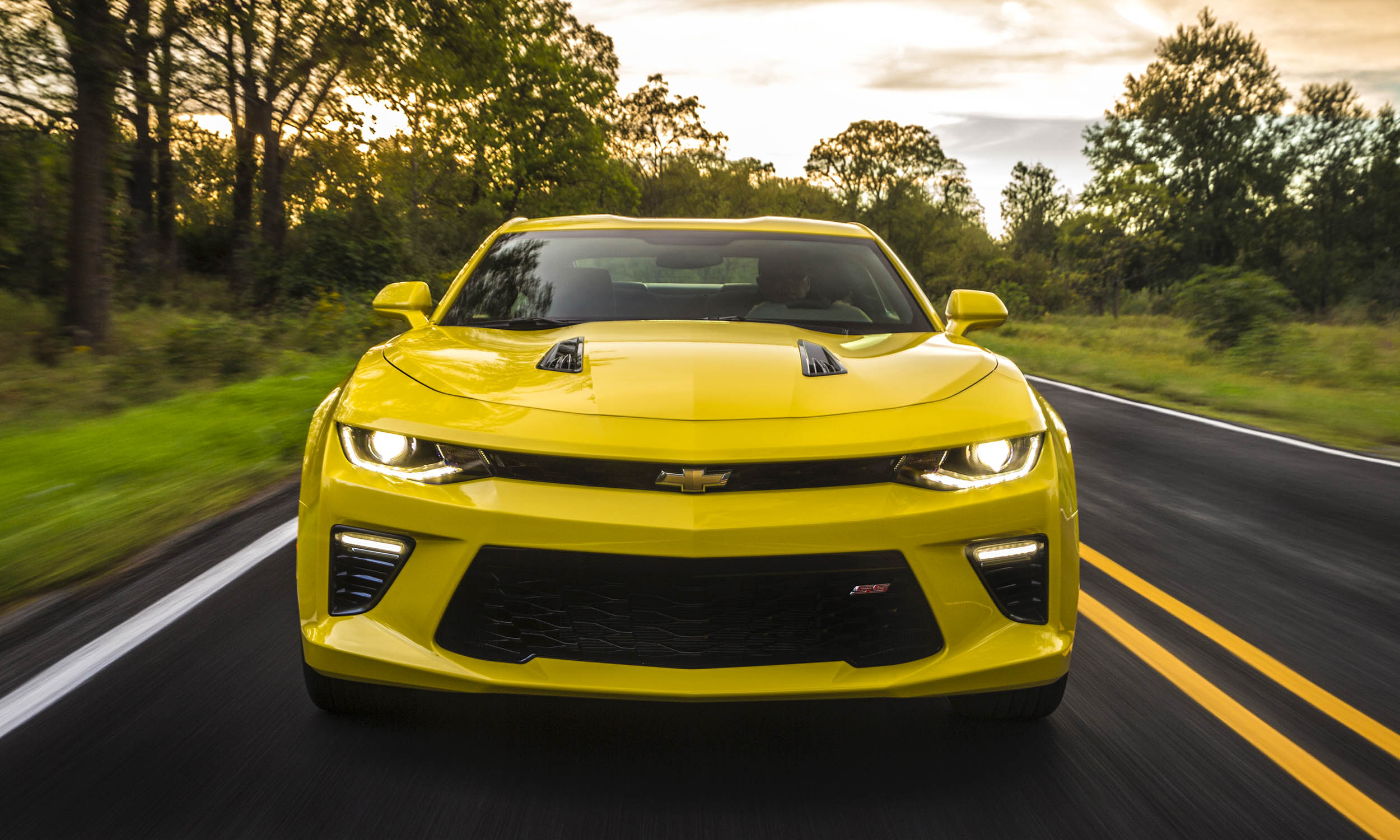 © General Motors
On the Road
The new 2016 Camaro SS feels exactly how it looks: more trim and athletic, with serious performance potential. The first noticeable thing — even in the heaviest SS model — is a more nimble and responsive demeanor. The stiffer chassis communicates back to the driver, and the electric power steering is tuned for great feel and response. The 6.2-liter V8 engine has formidable power, and the sound of the dual-mode exhaust means business in Sport or Track mode. With the Magnetic Ride Control Suspension the driver can dial it up for the track or soften it up for long hours on the highway. The Camaro SS feels nimble, balanced and powerful on twisty back roads and is incredibly fun to drive. We haven’t had the chance to drive it on the track, but according to Chevrolet the new Camaro is quicker on track than the previous-generation 1LE package that was specifically tuned for the track. The Active Rev Matching makes for perfectly-matched downshifts, although the pedals and throttle response are so great we were able to just turn it off. On the open road of west Texas we preferred Sport mode — even at 75 mph on long, straight stretches — for the additional control when passing trucks and fighting strong headwinds. 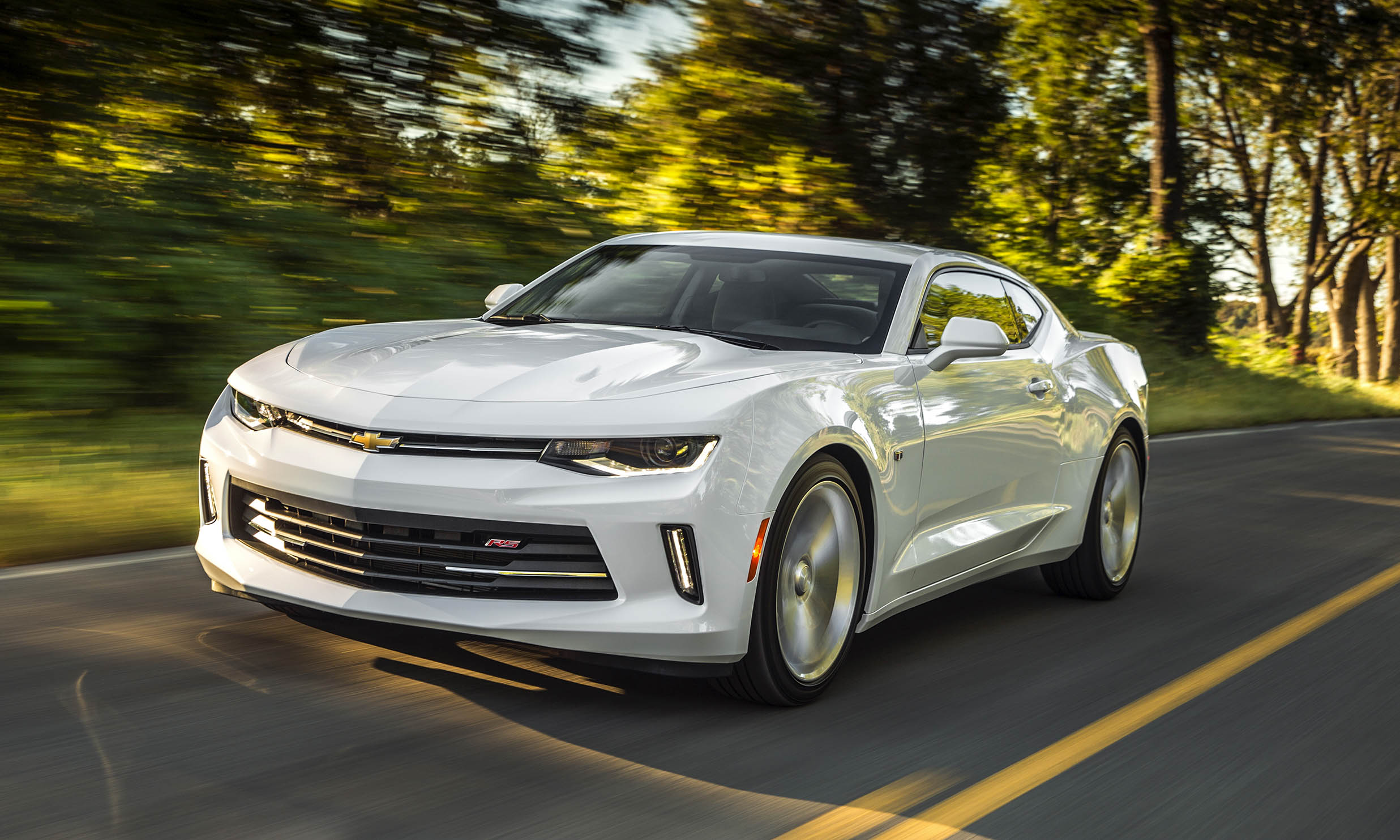 © General Motors
Right for You?
The 2016 Camaro improves in every way with more power, a stiffer platform, improved technology and less weight, while the design hits the mark with a fresh, new look. Whether you are a longtime Camaro fan or looking for a fun sport coupe, the 2016 Camaro is a car you must drive. 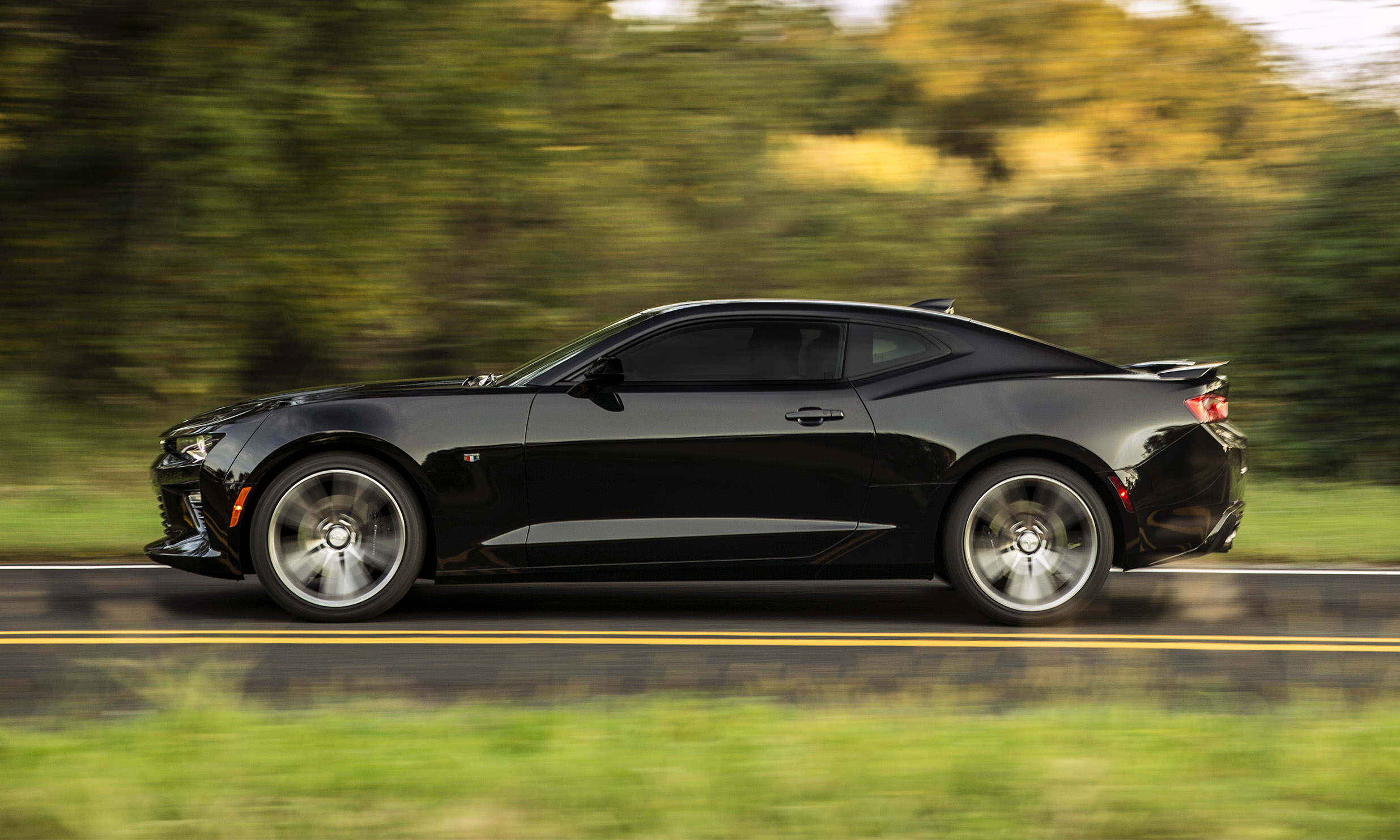