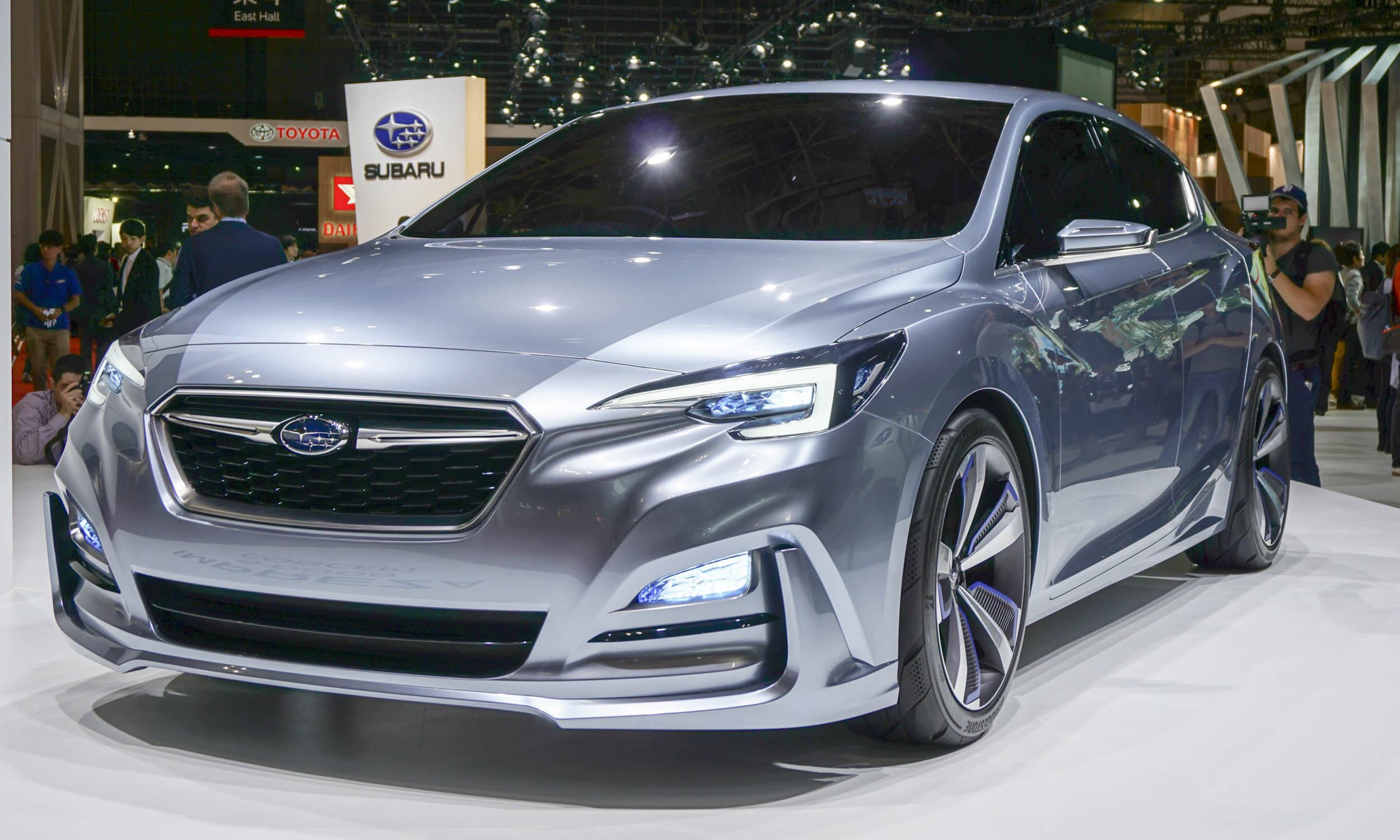 Future Look
The popular Impreza is one of the most varied offerings in the Subaru lineup, ranging from the base-level economical hatchback to the high-performance 305-horsepower WRX STI. The current generation hasn’t been around that long, but Subaru is already giving us a glimpse into a possible future design with the debut of the Impreza 5-Door Concept. Alongside the Impreza is the Viziv Future Concept, which provides a broader look at the future of Subaru as a brand. 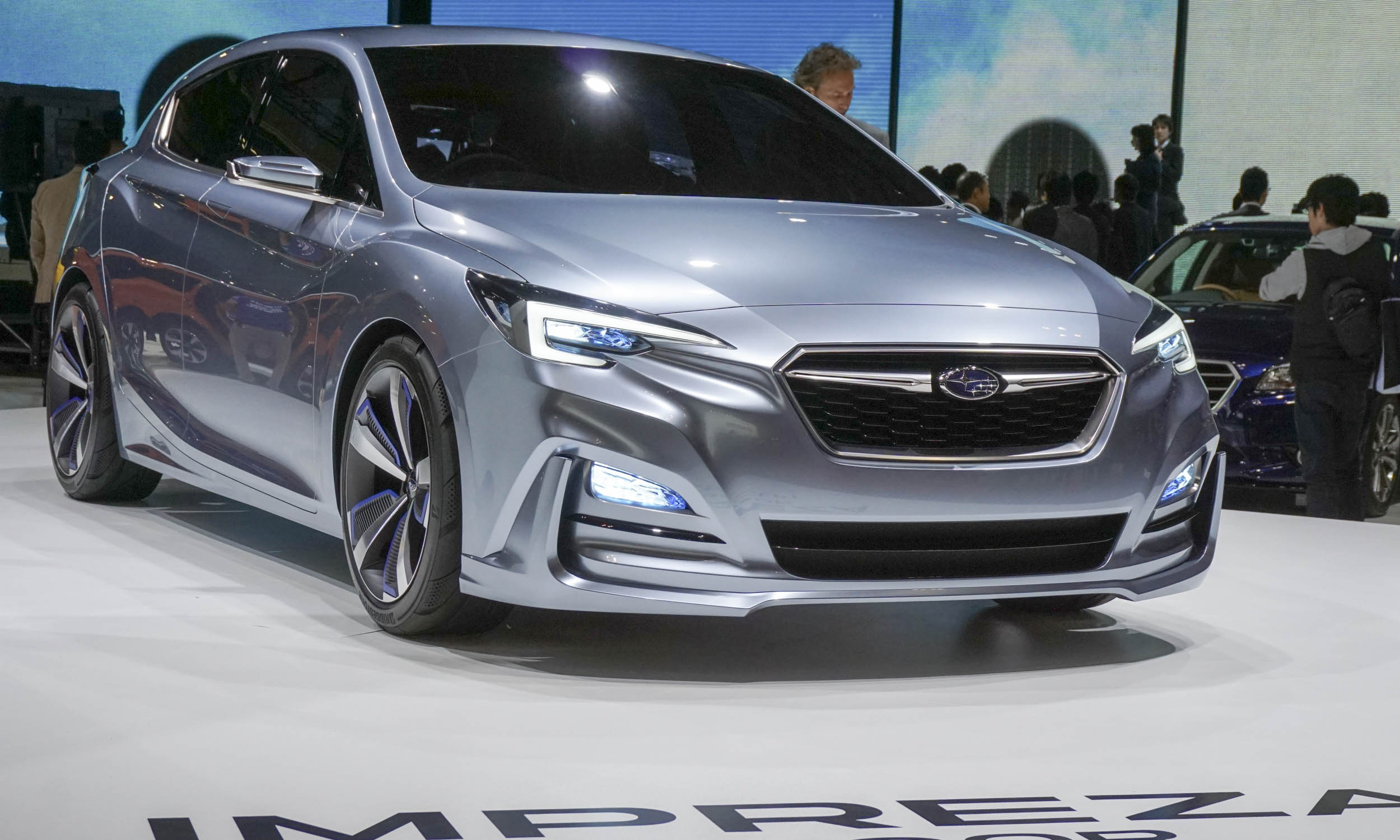 Next-Generation Impreza
The Impreza 5-Door Concept represents the first of Subaru’s next-generation vehicles. The future Impreza possesses upscale design cues, even if it is the entry-level model in the Subaru lineup. The design direction showcased here not only indicates what we can expect from the next Impreza, but provides a peek into how the rest of the Subaru lineup will follow. 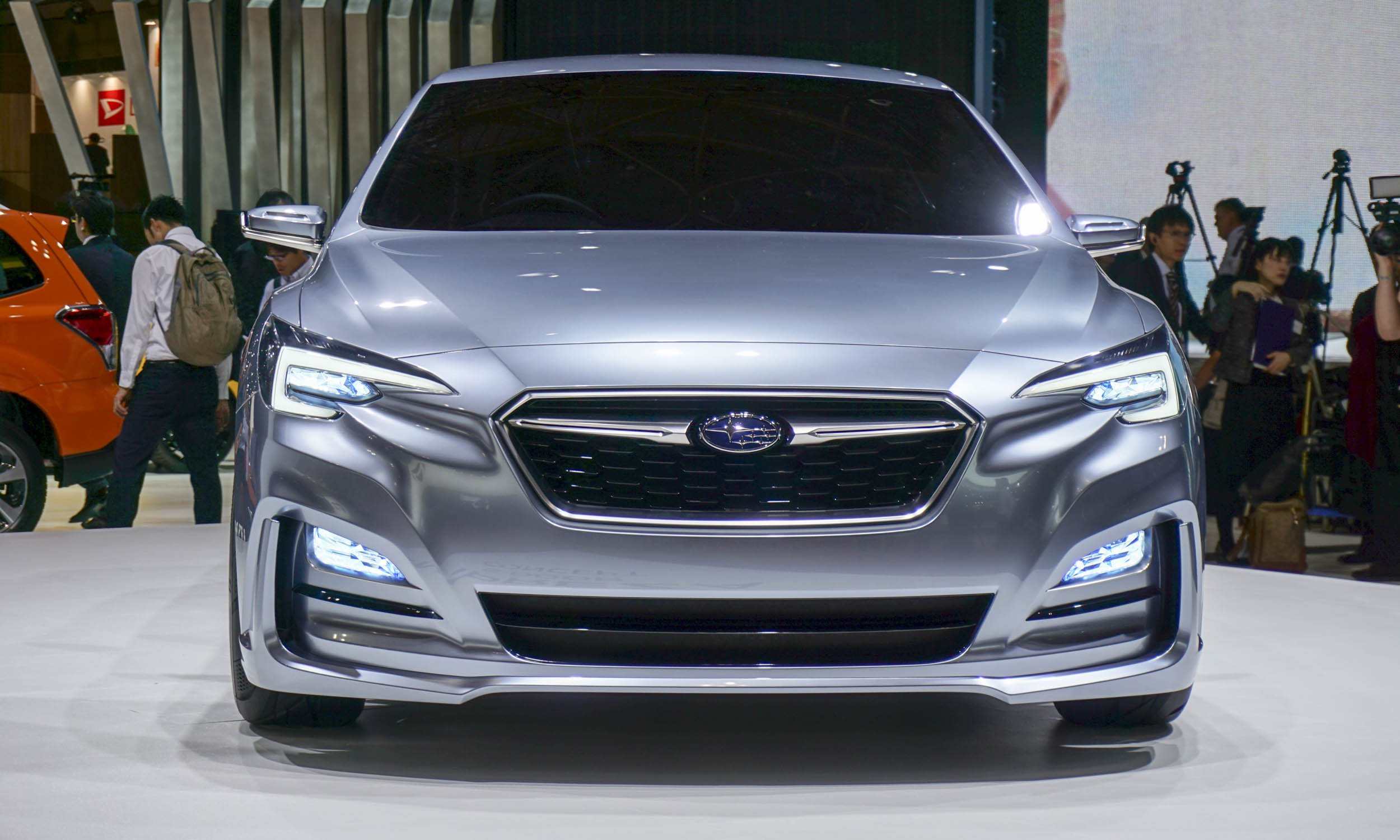 Wide and Low
Viewed from the front, the Impreza 5-Door Concept reveals performance styling with its wide, low stance. The hexagonal grille clearly identifies this as a Subaru, flanked by what Subaru calls “hawk-eye” headlights. 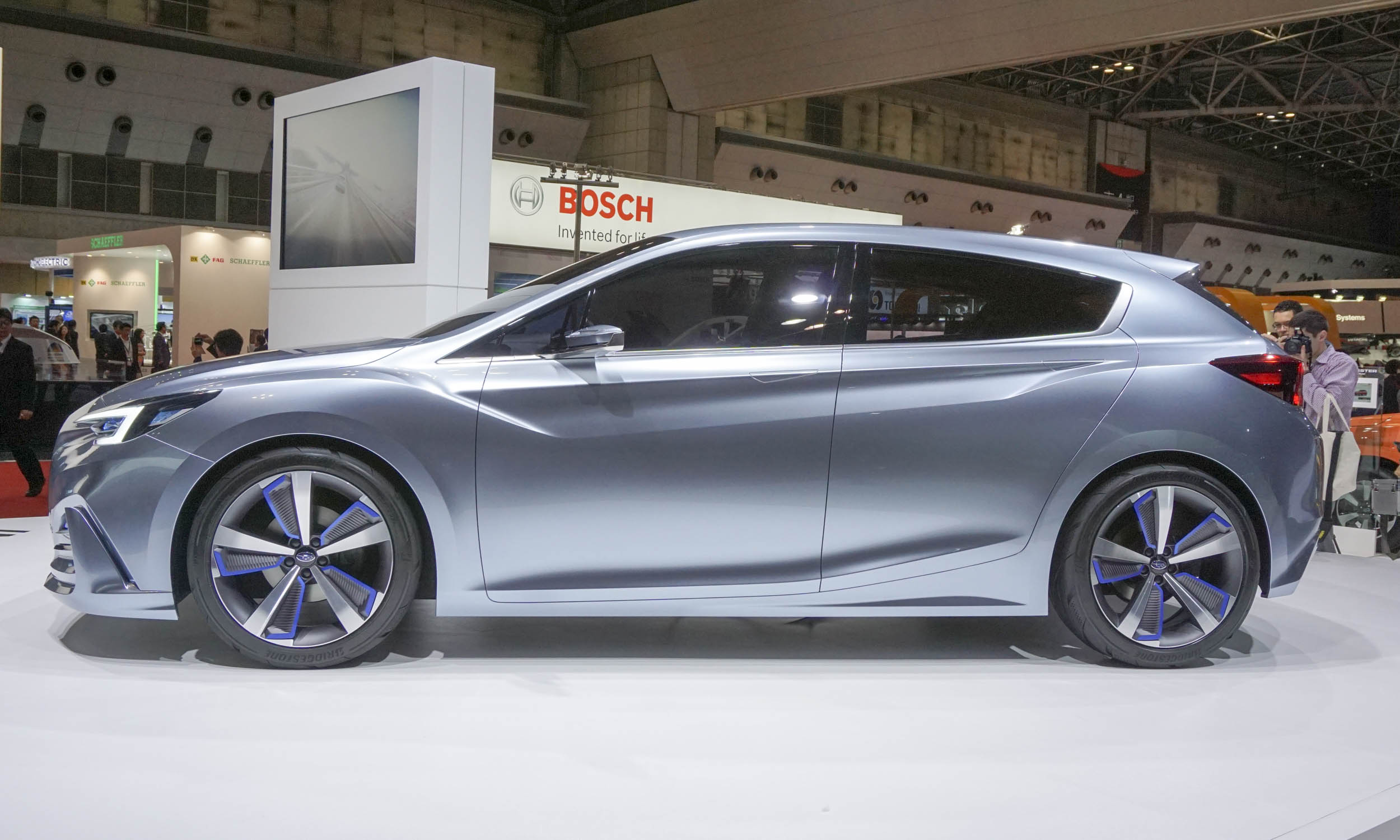 All-Wheel Drive
Subaru is best known for its all-wheel-drive system, featured on all but one vehicle in the current lineup (the BRZ is uniquely rear-wheel drive). The Impreza 5-Door Concept highlights this feature with bold extended fender flares that wrap around large 19-inch wheels. 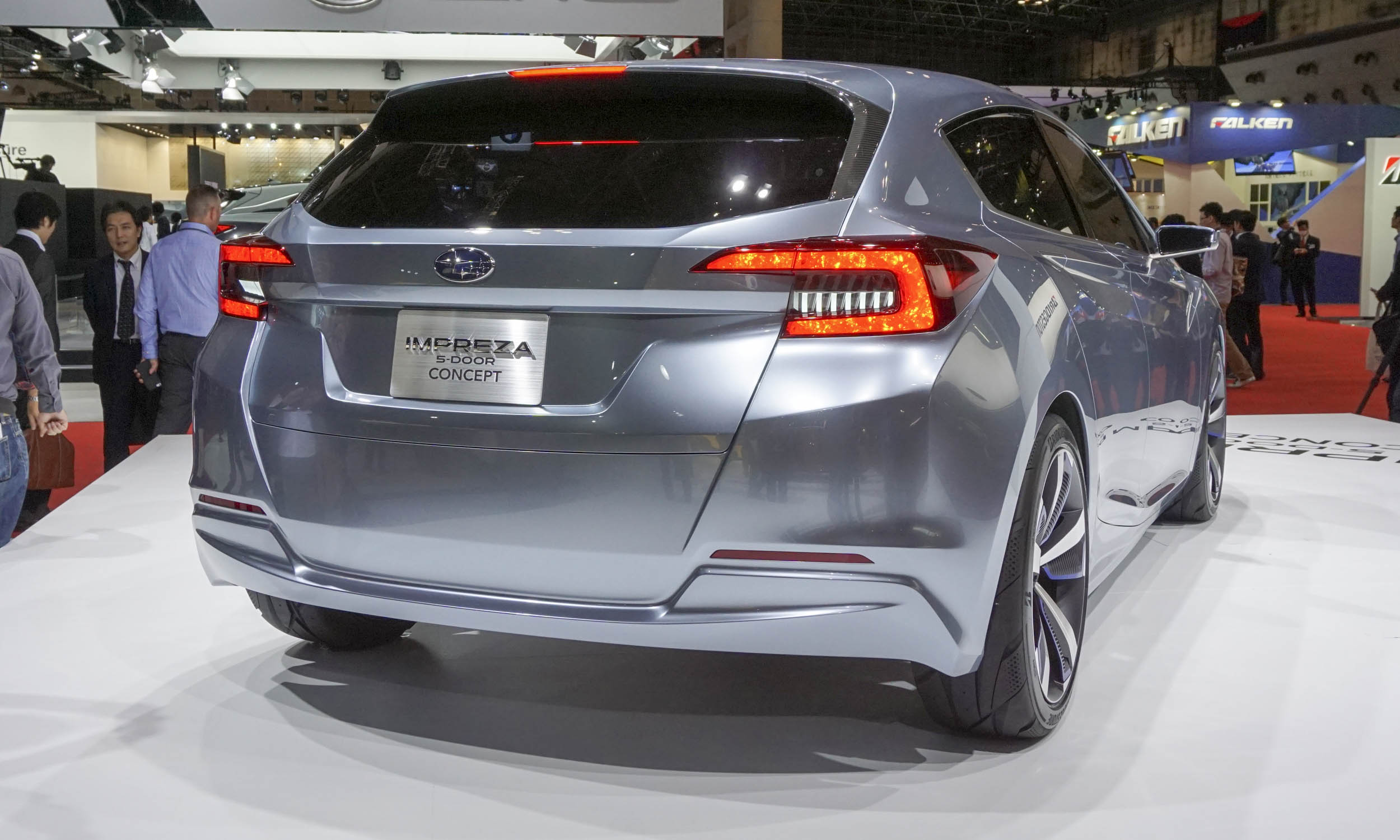 Powerful Styling
The wide stance of the Impreza 5-Door Concept carries through to the rear, enhanced by the hatchback’s powerful shoulders. 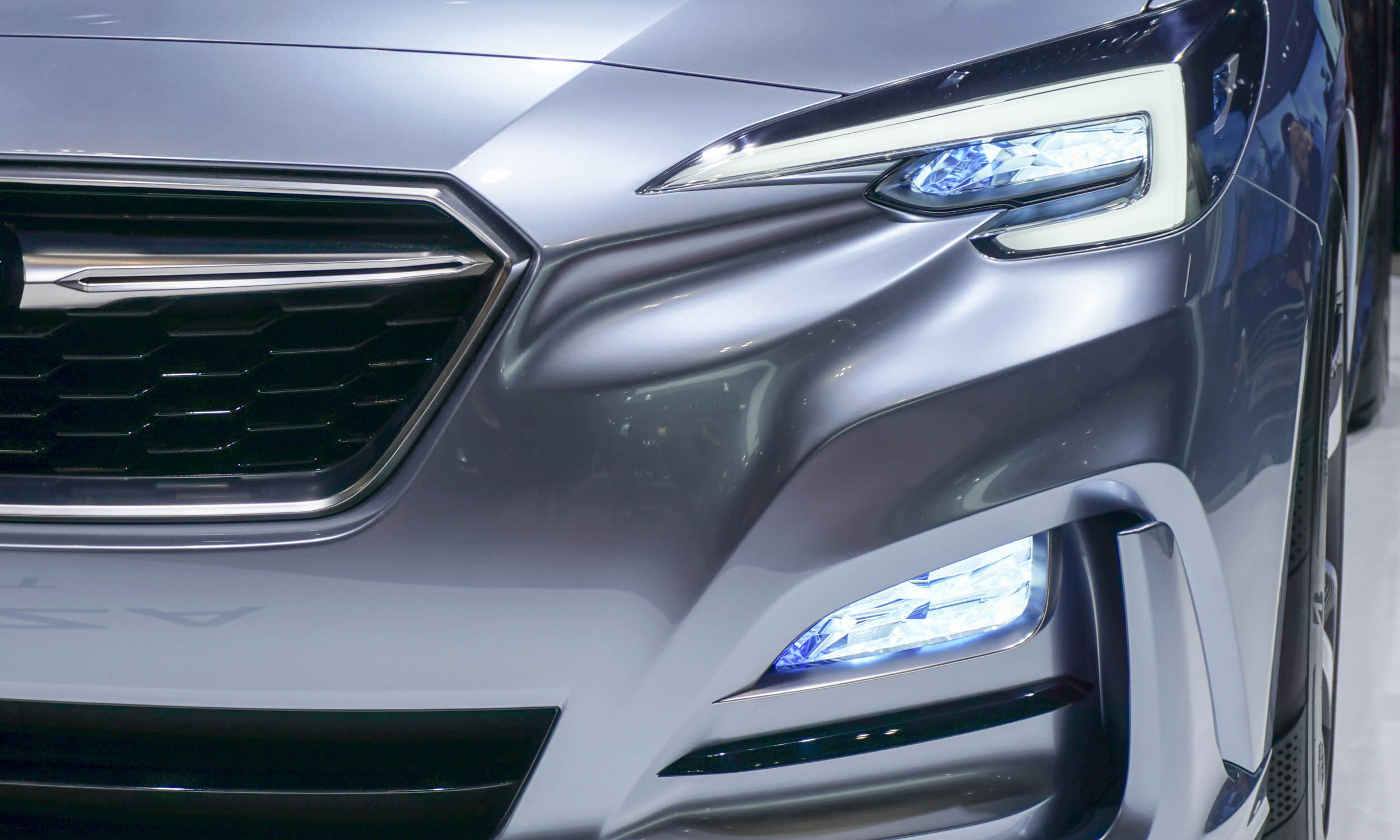 Future Plans
The Impreza Concept isn’t exactly ready for production, but we’d expect to see a new Impreza based on this concept sometime in the near future. 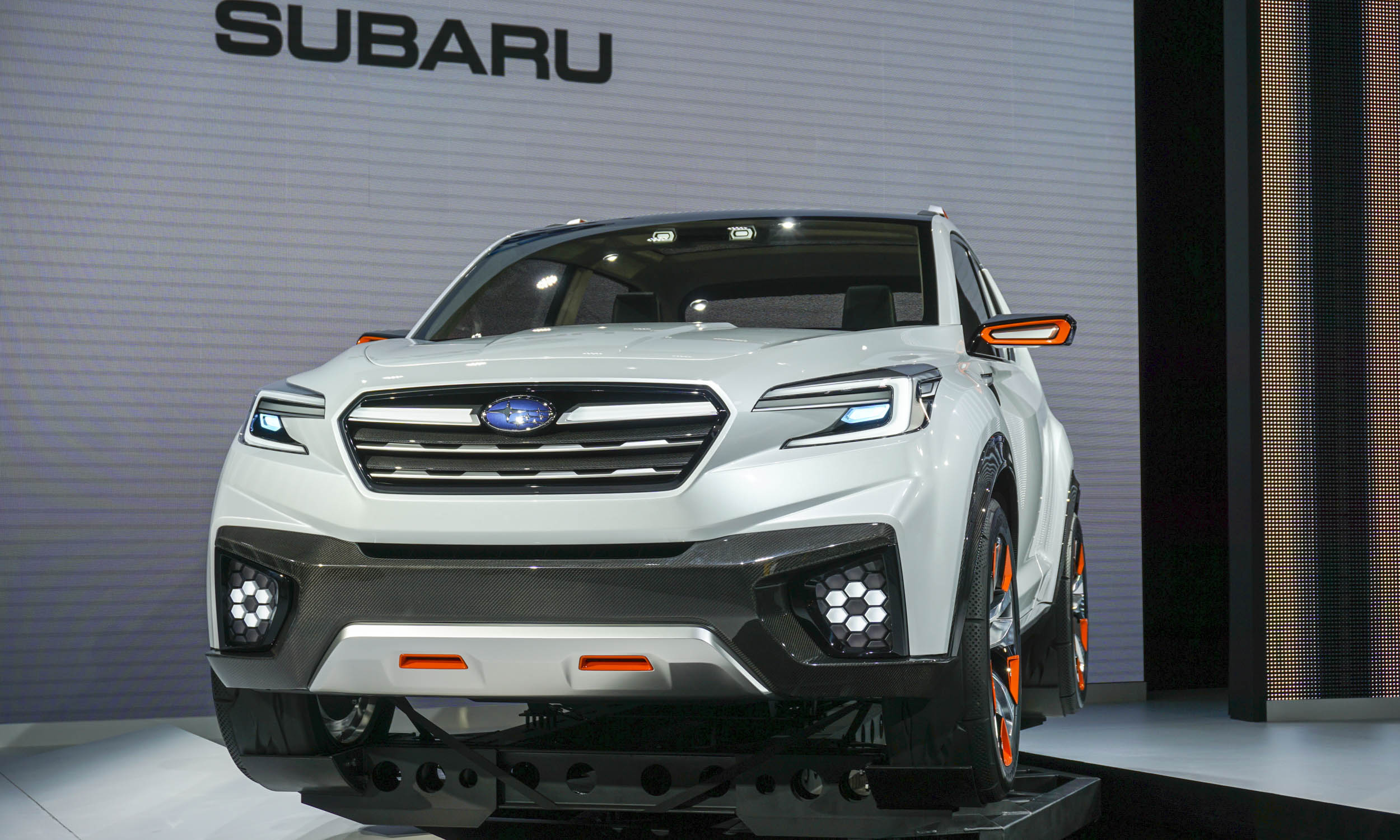 Subaru Viziv Future Concept
Where the Impreza Concept is more of a styling exercise, the Viziv — named derived from Vision for Innovation — showcases not only styling but powertrain and other advanced features we might expect to see on Subaru vehicles in the future. 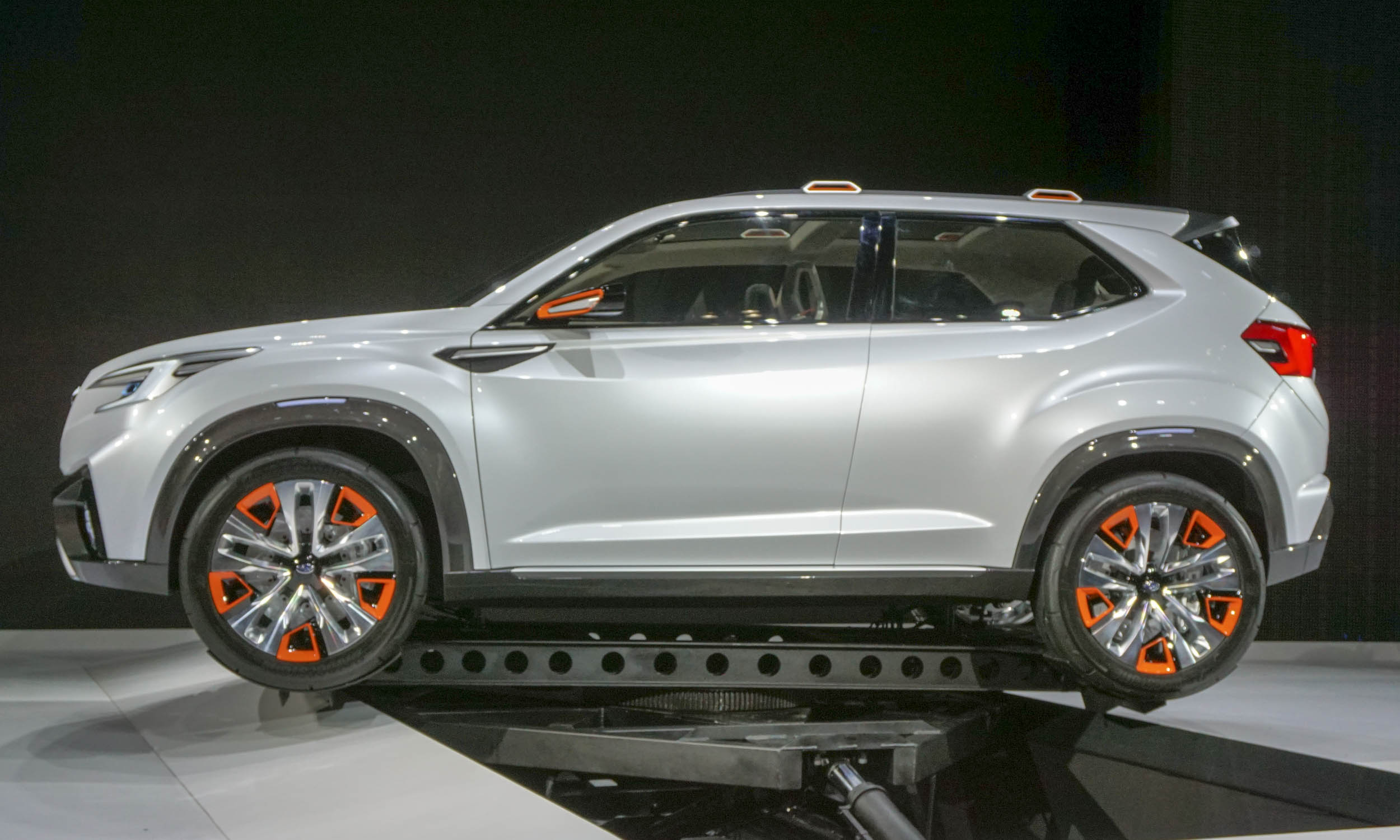 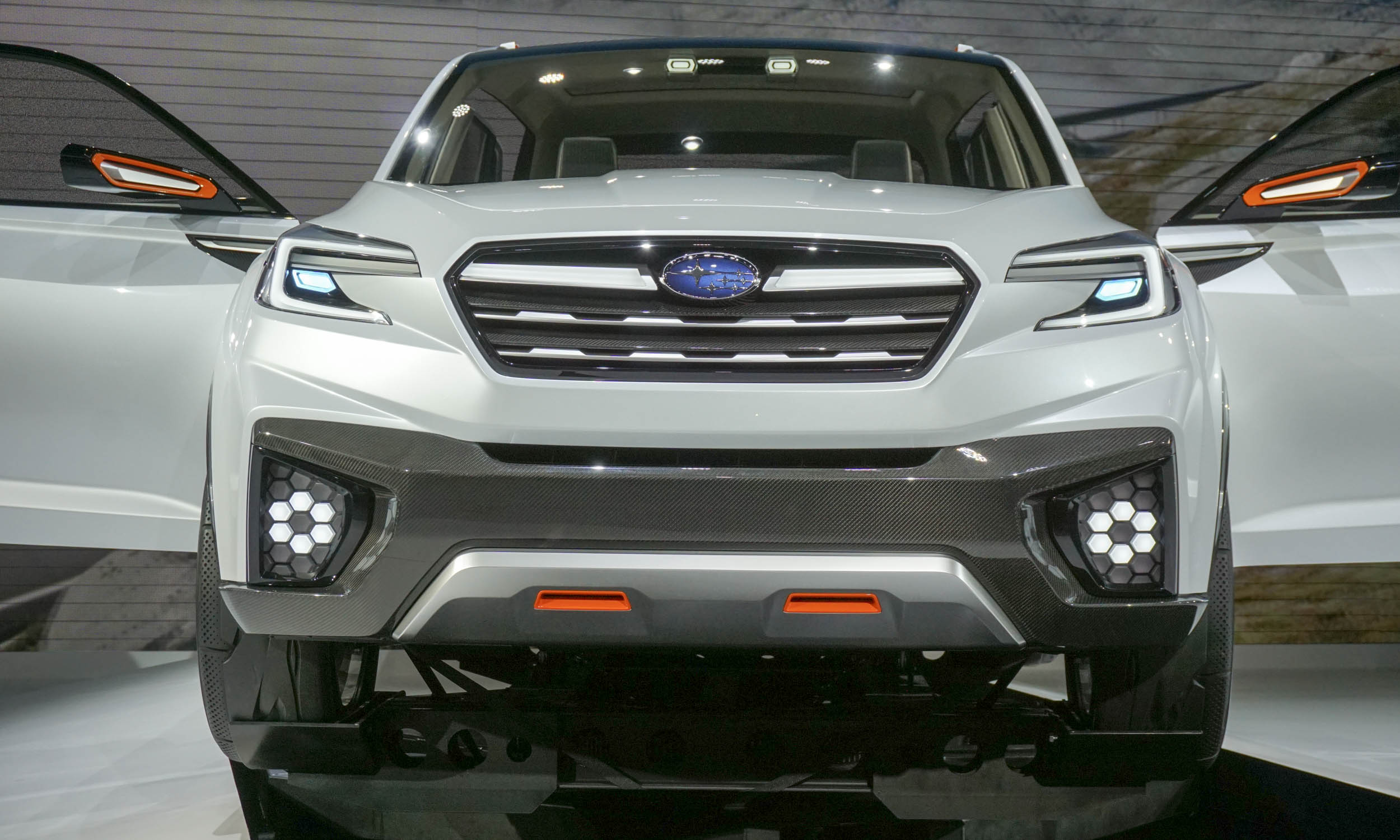 Eyesight Enhanced
Eyesight is Subaru’s innovative camera-based high-tech safety system that provides input for adaptive cruise control, lane departure warning and collision avoidance. The Viziv takes Eyesight to the next level, adding in highly-accurate GPS and map data to track curves in the road as well as conditions ahead to provide the basis for autonomous driving at all speeds on highways, as well as available automatic parking. 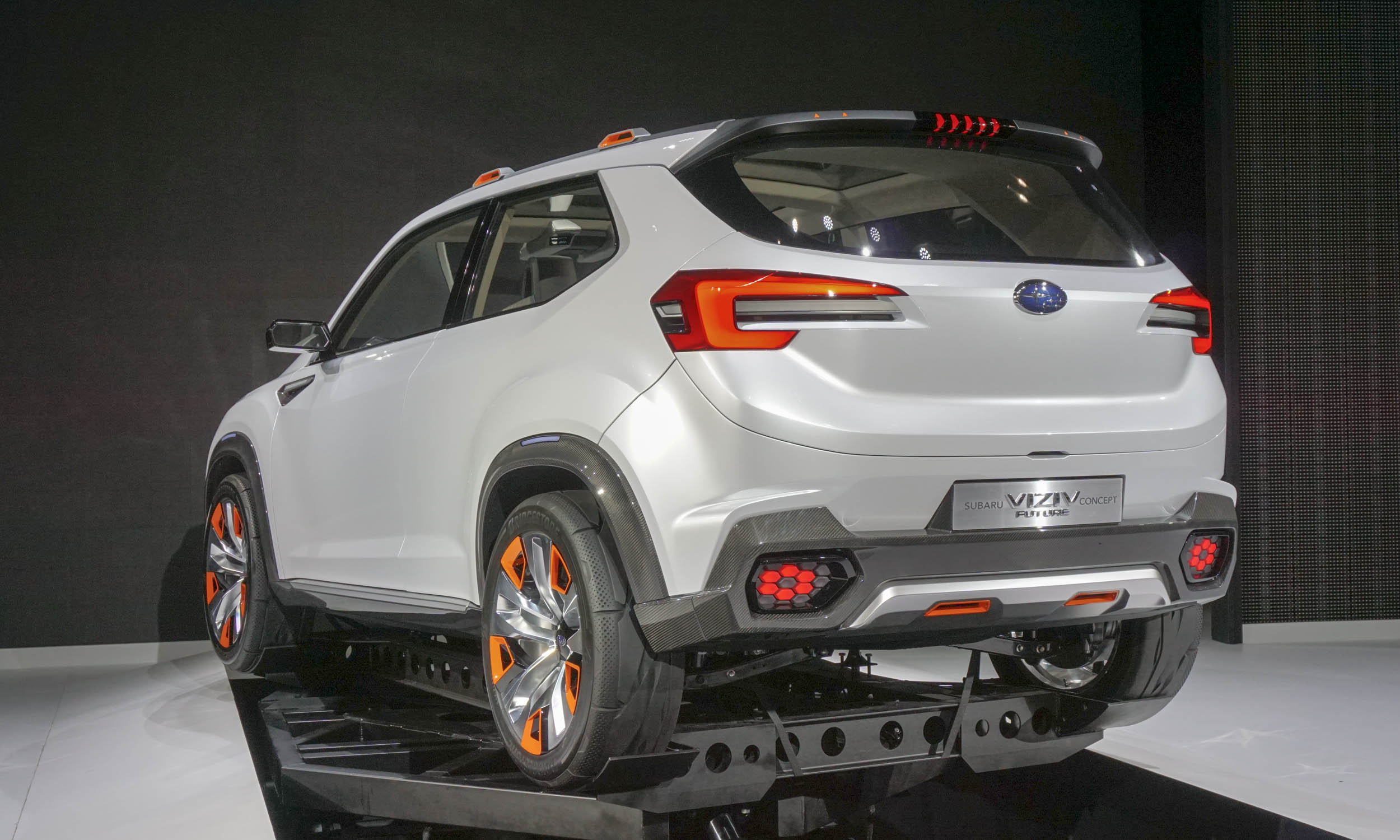 Checking the Weather
With further advances in telematics and other information services, adverse traffic and weather conditions could be anticipated and mitigated, either by alerting the driver or utilized in the autonomous driving system. 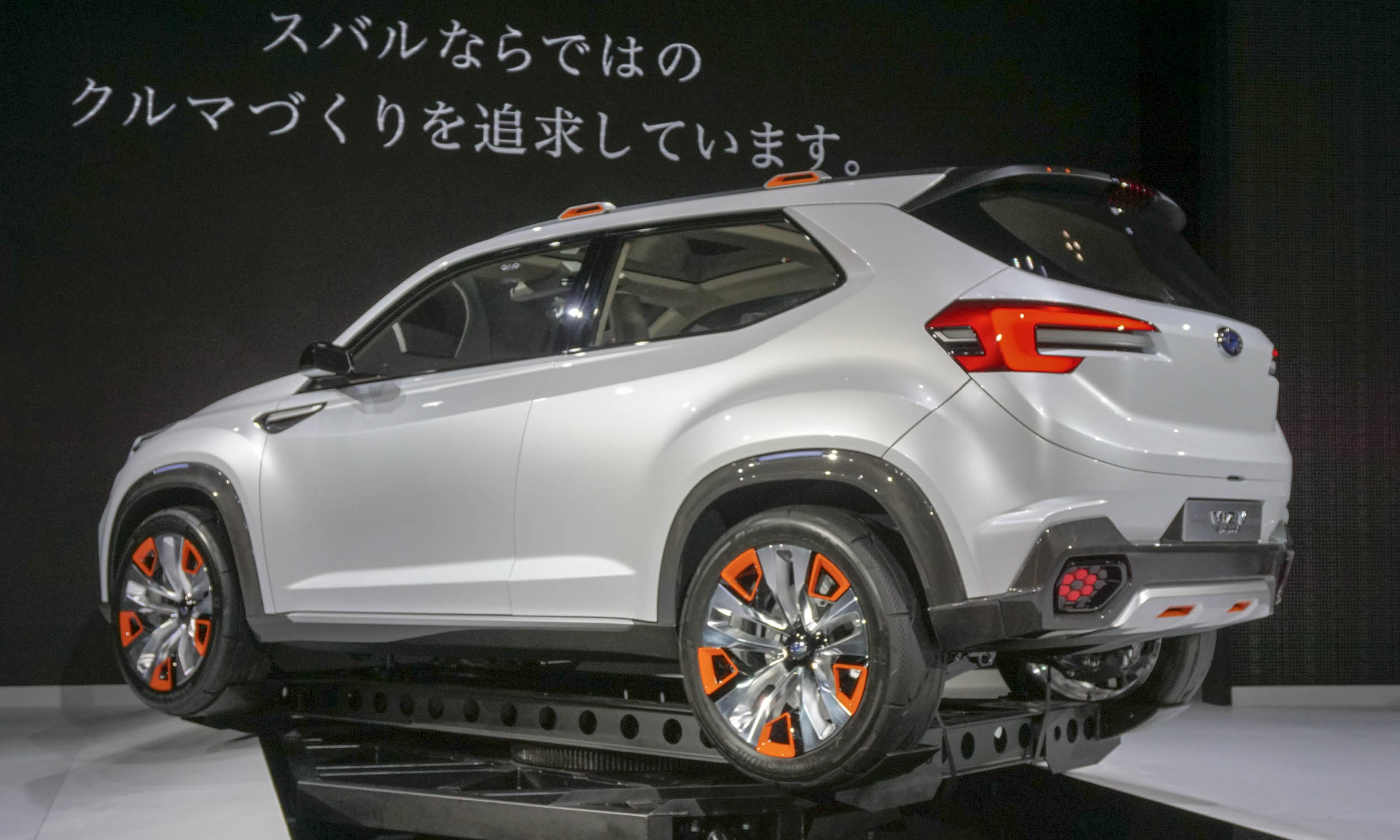 Hybrid Power
The Viziv Future Concept takes the hybrid powertrain currently in the XV Crosstrek — Subaru’s first production hybrid – and enhances it to provide better performance and fuel economy. A new turbocharged engine is smaller and lighter than the current unit, and offers a smoother feel under acceleration as well as increased fuel efficiency. 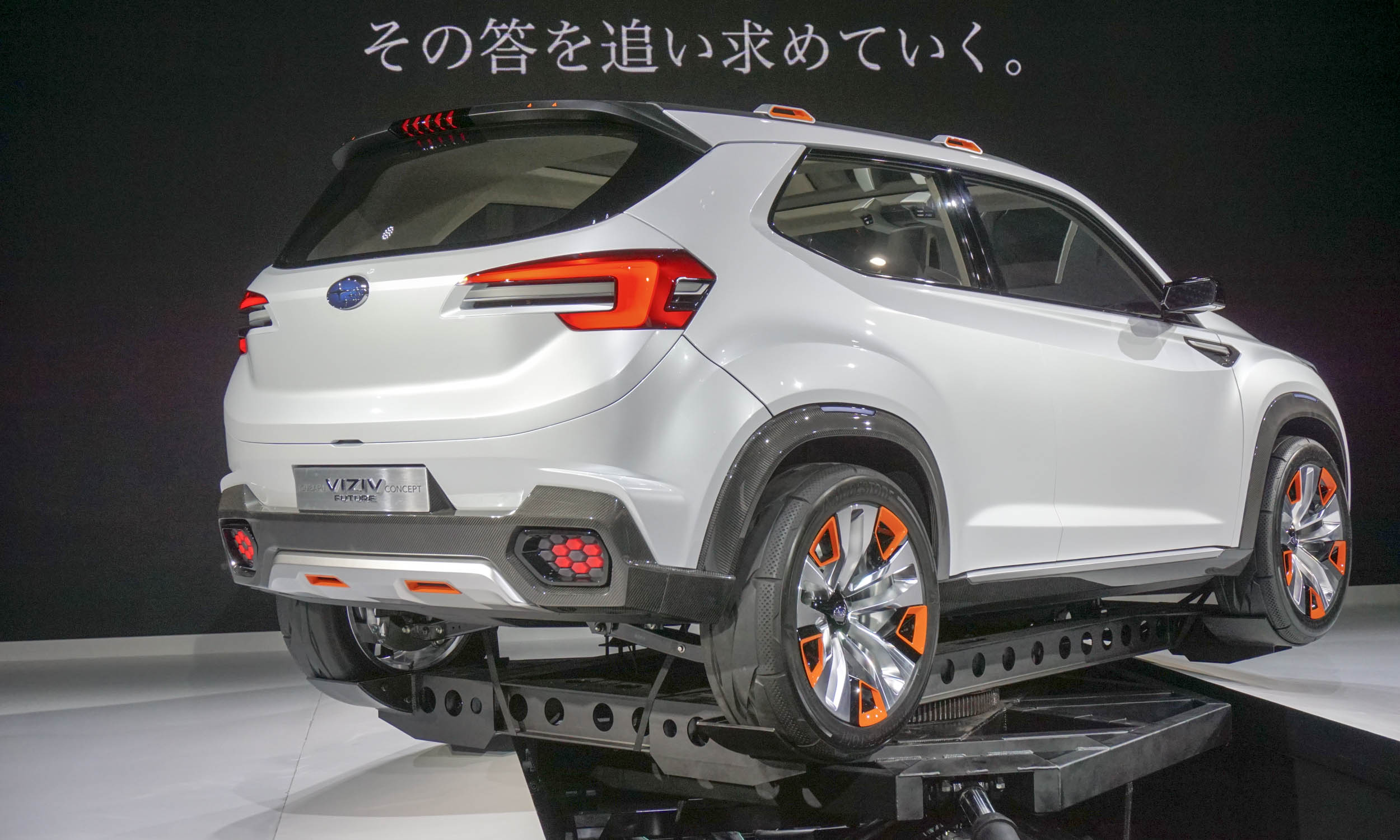 All-Wheel Drive
Of course the Viziv Future Concept features all-wheel drive, but the system differs from any found in current Subarus. The driveshaft connecting to the rear axle is replaced by an electric motor mounted directly on the rear axle. This provides a flat floor throughout the vehicle for greater flexibility and roominess. 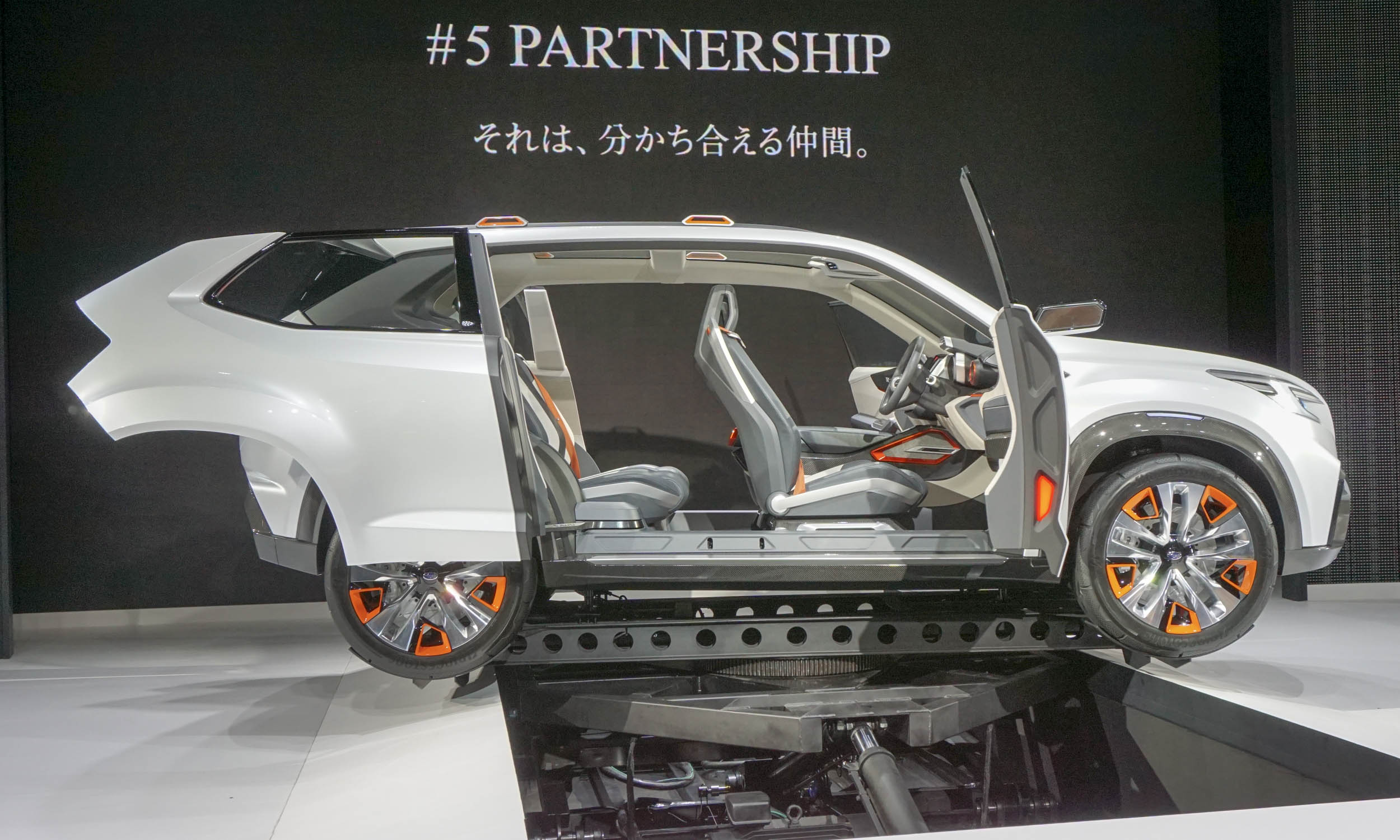 Interior
Although clearly advanced compared to current Subarus, the Viziv interior doesn’t look so futuristic that it gets immediately dismissed as fantasy. Black and beige contrast with orange highlights. The matching of the orange trim inside and out is a nice touch. 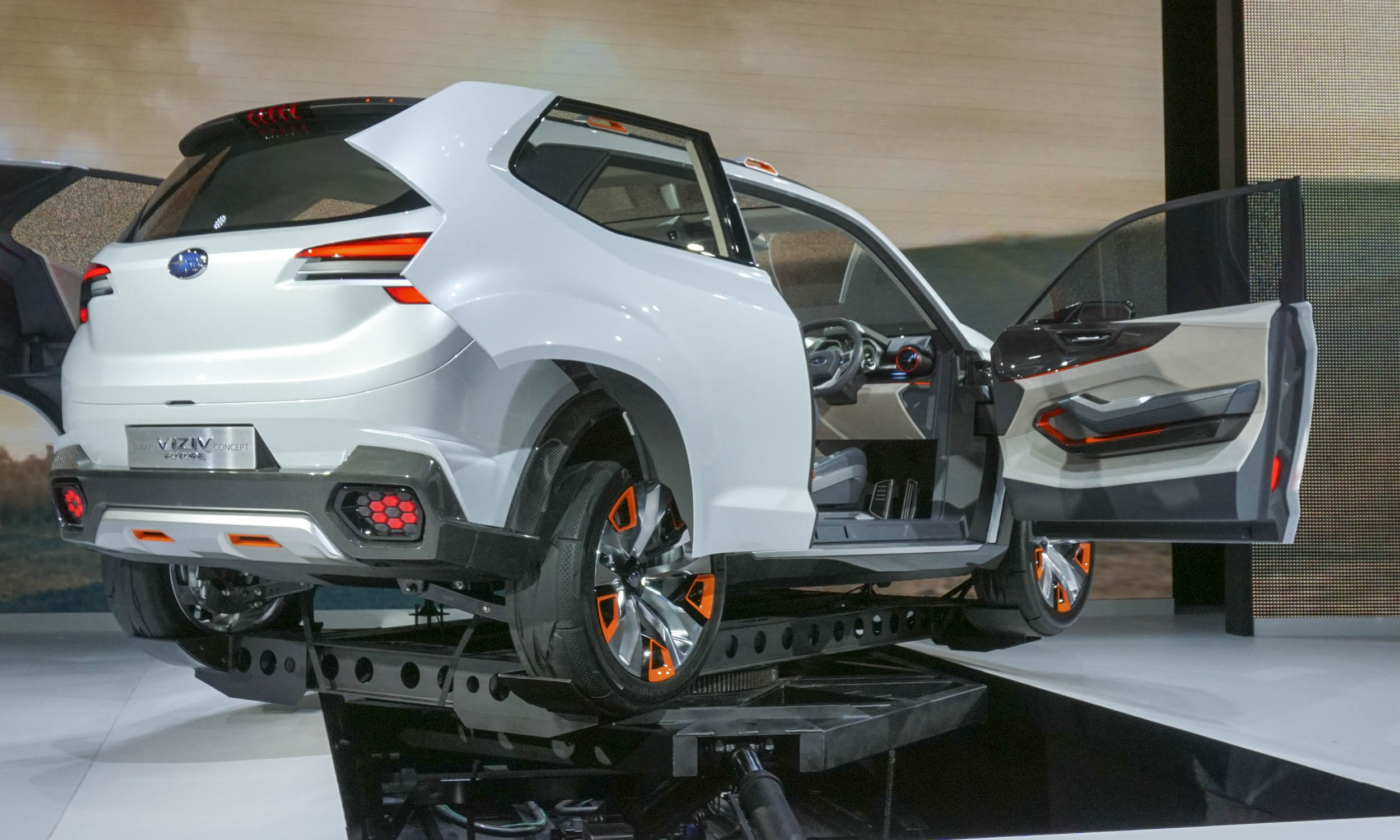 Easy Access
The Viziv concept features a unique door system – front doors are standard but rear doors slide backwards, providing a wide opening for easy entry and exit. The sharp points on the back of the rear doors look very stylish, but might be painful if you were to run into one. 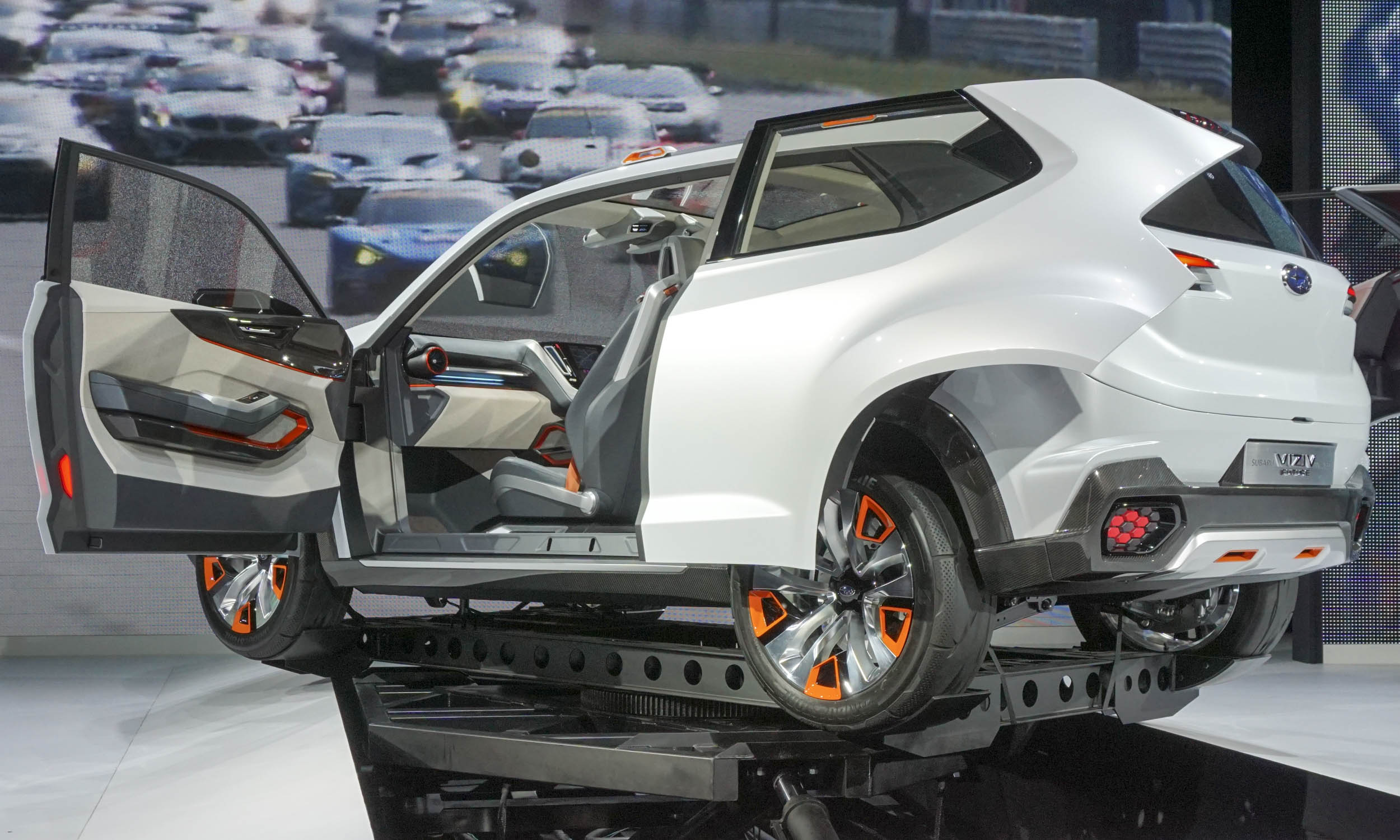 Timetables
Subaru has not revealed any specific timelines regarding availability of these new designs and features on production cars, but nothing shown here seems so outlandish that it couldn’t find its way to production in the next few years. Except perhaps those unique doors on the Viziv concept.