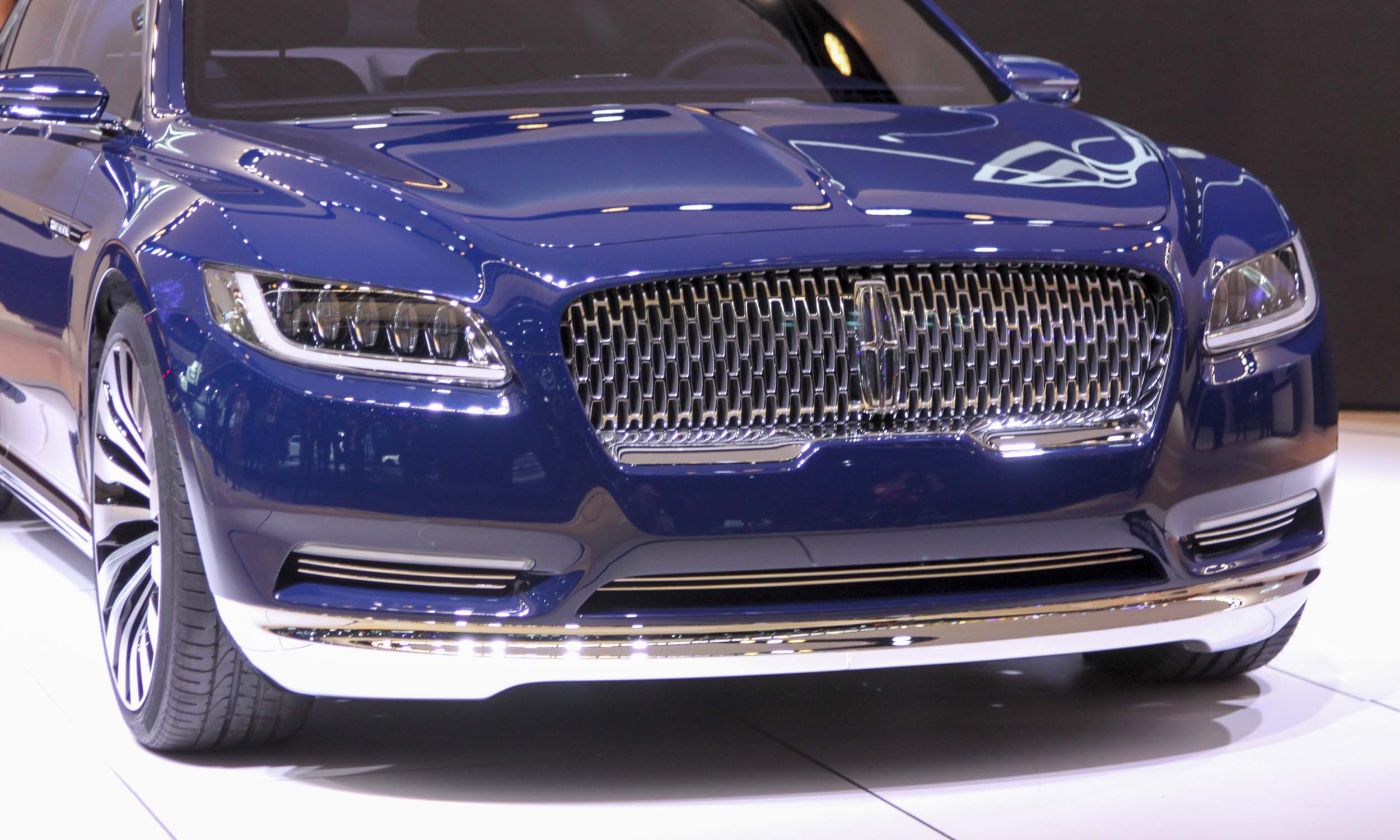 MoreNY72
New York Stories
There were many stars this year at the New York Auto Show. From the Cadillac CT6 flagship sedan coming later this year and the Lincoln Continental Concept showing what to expect from Lincoln next year, to the redesigned Jaguar XF and the lightweight, high-powered Porsche Boxster Spyder — luxury and performance cars undoubtedly took center stage at the show. New York wraps up the auto show season, and this year’s event had a particularly upbeat buzz with many automakers taking major steps toward new directions in both concepts and production vehicles for next year. Here are the important luxury and performance debuts from New York. 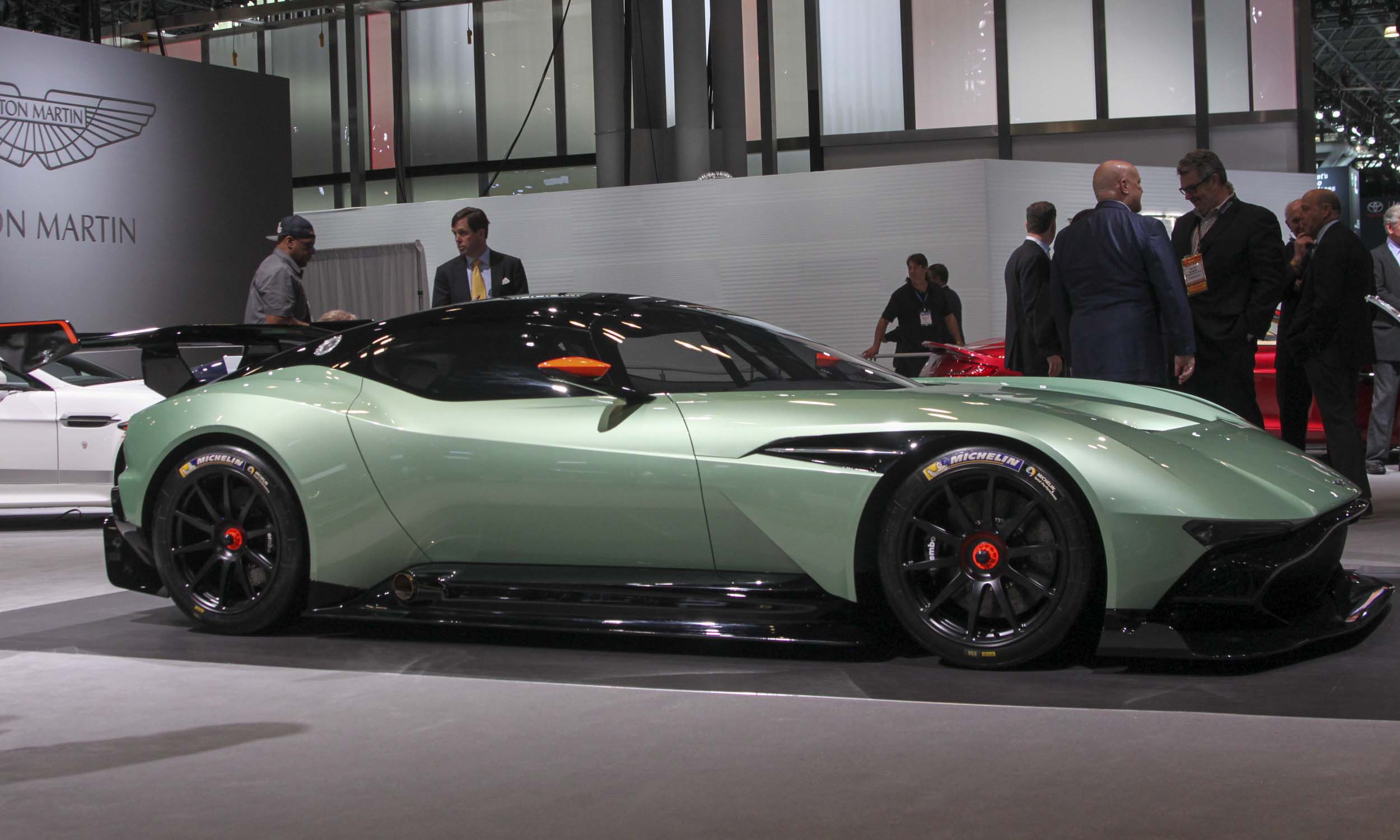 © Perry Stern, Automotive Content Experience
Aston Martin Vulcan
We saw this car for the first time last month when it premiered at the Geneva Motor Show, and it still grabs our attention whenever we walk by it. One of the most extreme Aston Martins ever made available to consumers, the Vulcan is an all-new supercar designed specifically for use at the track. Only 24 copies of this 800-plus horsepower beast will be sold, and it is not street legal. 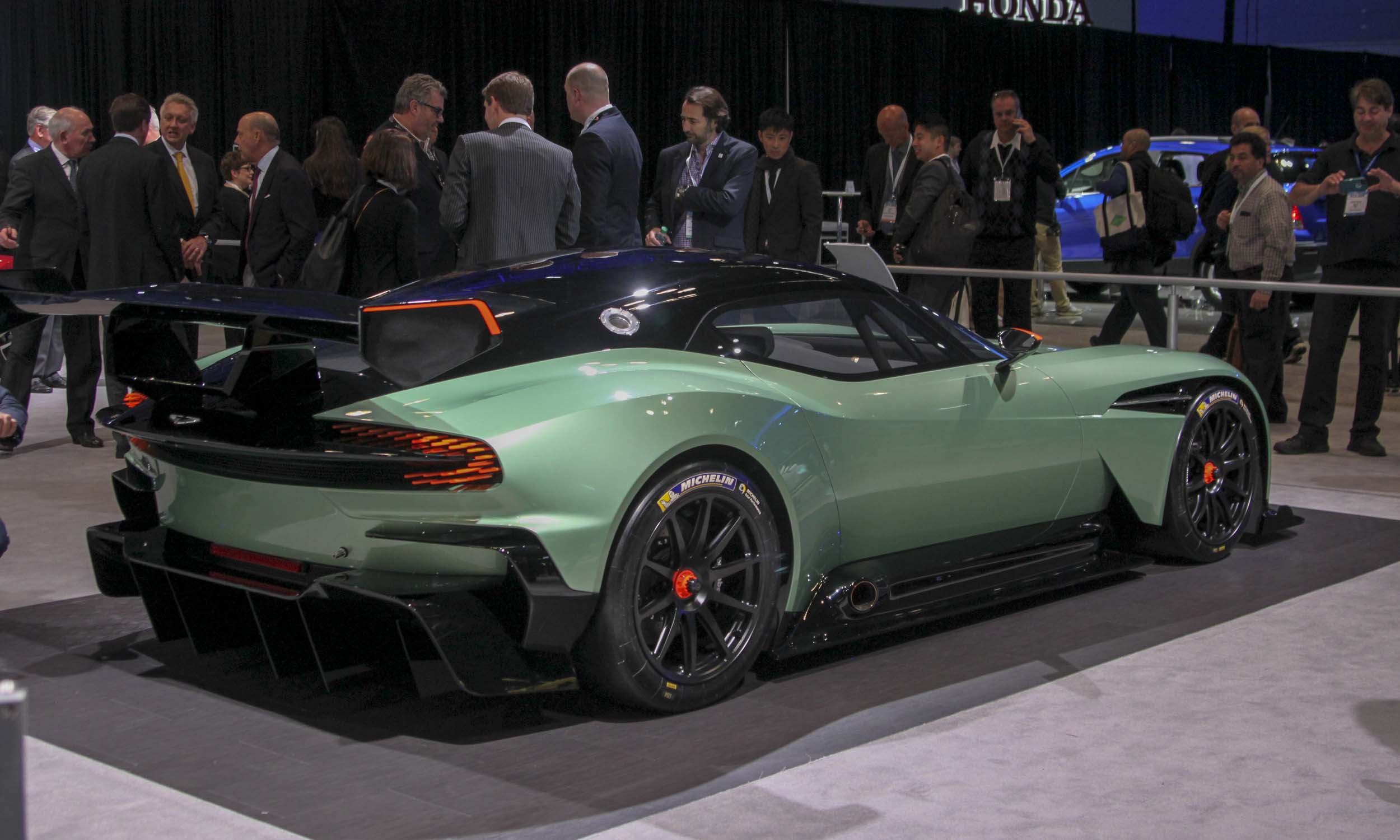 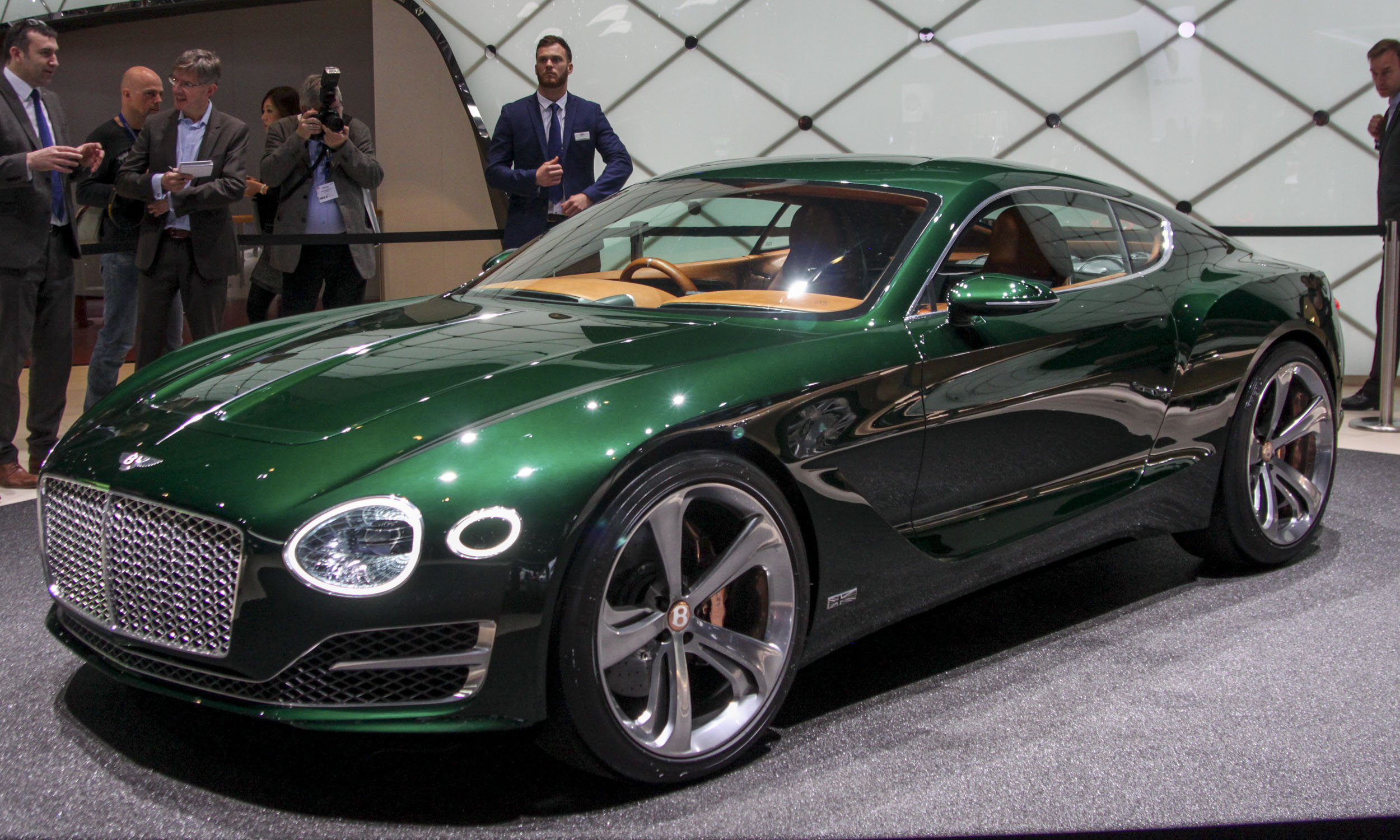 © Perry Stern, Automotive Content Experience
Bentley EXP 10 Speed 6 Concept
Although not on display at the Javits Center, Bentley brought this sexy concept to New York to show it to loyal customers as well as the attending media. The EXP 10 Speed 6 is a high-performance 2-seat sports car that Bentley is pondering for production. Considerably smaller than the Continental GT, the muscular-looking coupe is a modern interpretation of classic Bentley design cues including the familiar grille and oval taillights. 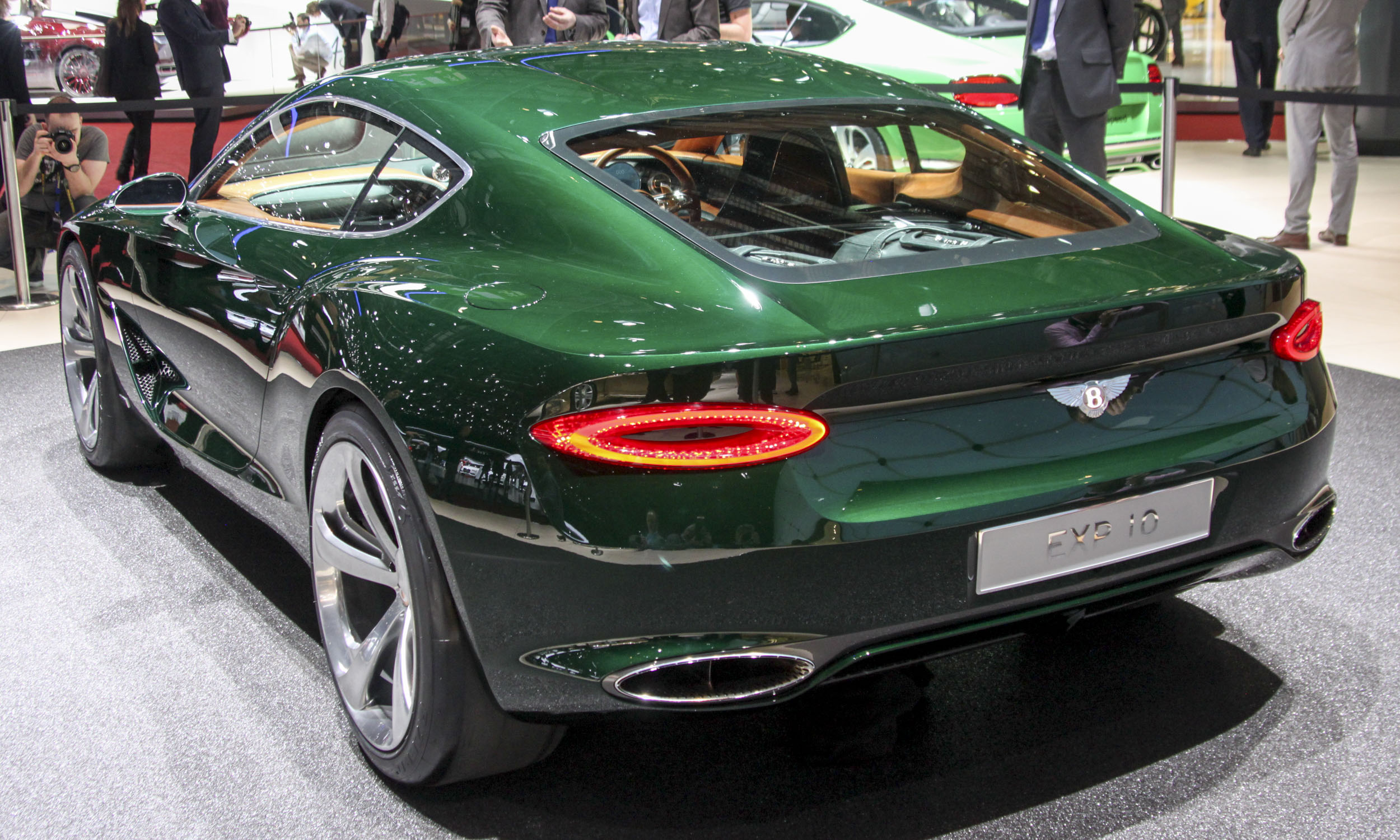 © Perry Stern, Automotive Content Experience
Bentley EXP 10 Speed 6 Concept
According to Wolfgang Dürheimer, chairman and chief executive of Bentley Motors, the “EXP 10 Speed 6 is one vision for Bentley’s future — a powerful, exquisite and individual concept. . . . It offers thrilling, driver-oriented performance, complete with trademark modern Bentley luxury and effortlessness.” We agree, and could see this new sports coupe competing with the likes of Aston Martin, Maserati or Porsche. 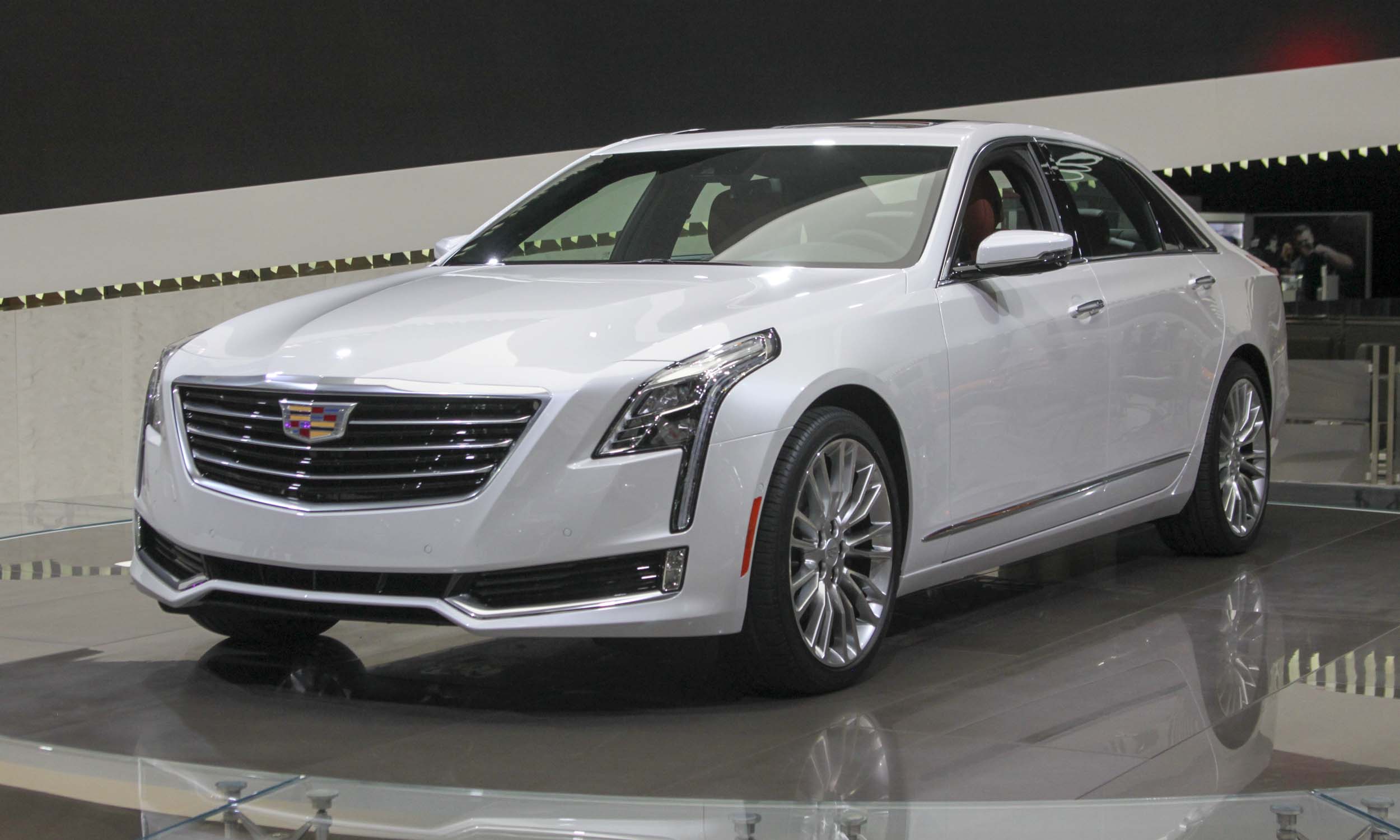 © Perry Stern, Automotive Content Experience
2016 Cadillac CT6
On the eve of the 2015 New York International Auto Show, Cadillac unveiled its new full-size luxury flagship sedan, the CT6. The aluminum-intensive body structure of the CT6 utilizes 11 different materials and all-aluminum exterior body panels for weight savings of almost 200 pounds over primarily steel construction, with the goal of achieving performance, luxury and efficiency. The result is an all-new vehicle that Cadillac claims will be one of the lightest and most agile among its competitors. 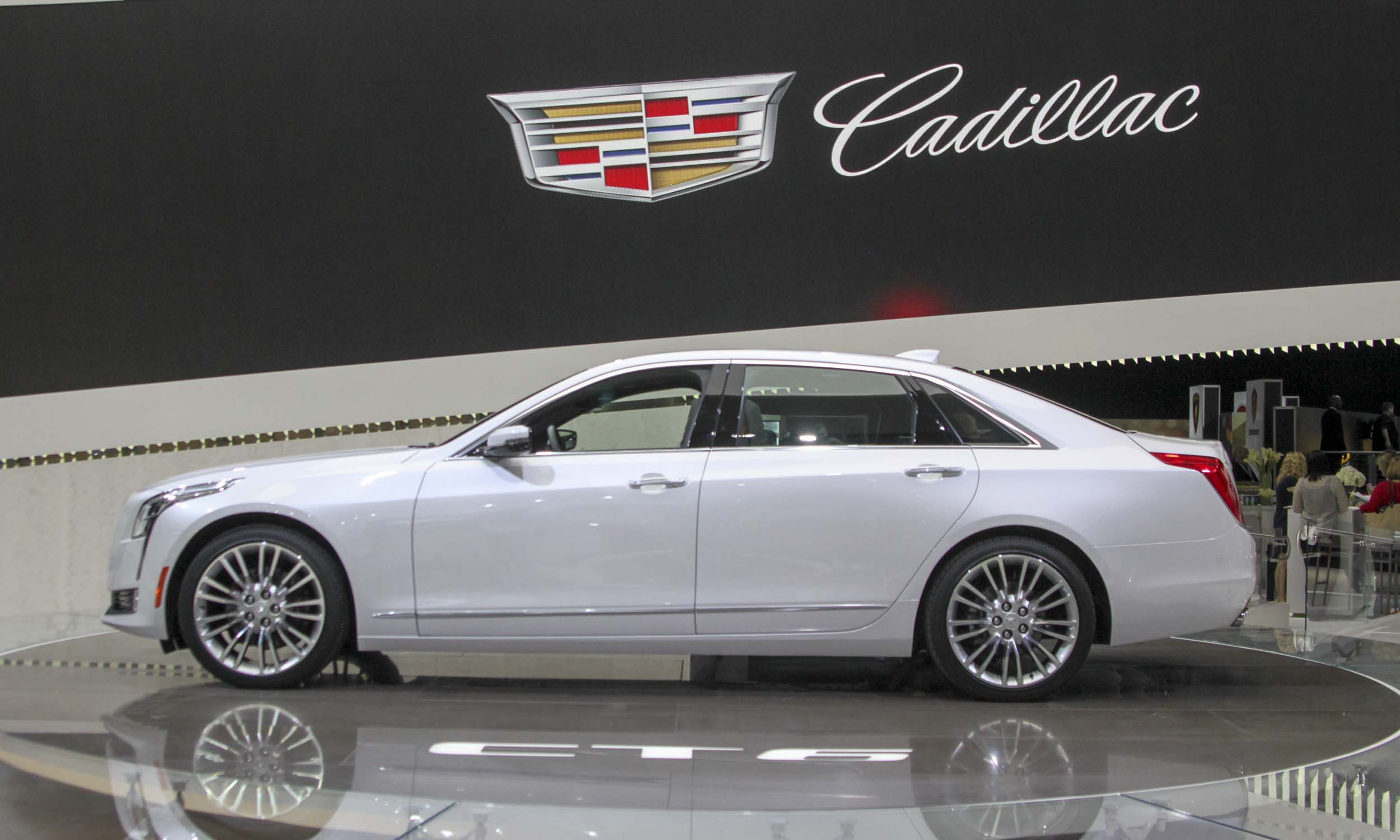 © Perry Stern, Automotive Content Experience
2016 Cadillac CT6
Three engine options will be offered for the CT6, including a new 3.0-liter twin-turbocharged V6 that will produce an estimated 400 horsepower and 400 lb-ft of torque. The other two engines will be a 2.0-liter turbocharged four cylinder and a 3.6-liter normally-aspirated V6, and all-wheel drive will be standard with either of the V6 engines. Inside, the CT6 features extended comfort seats, an available Articulating Rear Seat package, and a rear-seat entertainment package with 10-inch diagonal screens that retract into the front seats. Performance and chassis technology include active-on-demand all-wheel drive, active rear steering and Magnetic Ride Control on the available Active Chassis System. Production of the Cadillac CT6 will begin in the fall of 2015. 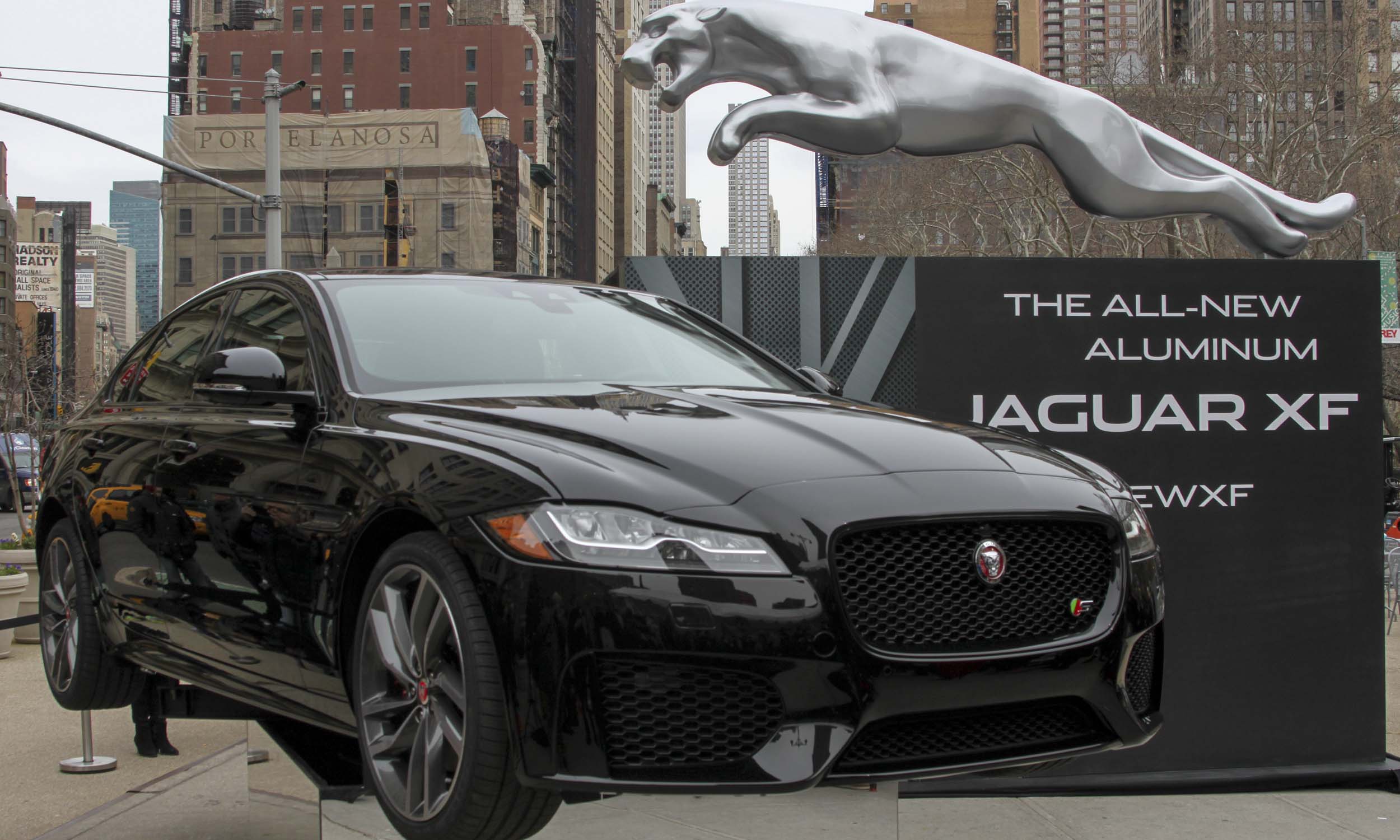 © Perry Stern, Automotive Content Experience
2016 Jaguar XF
The all-new XF made its public debut at the New York Auto Show after its worldwide reveal in a dramatic high-wire water crossing in London the previous week. Prior to the opening of the New York Show, Jaguar unveiled the new car at a special event in the Flatiron district. This new Jaguar is the first complete redesign since the XF debuted as a 2008 model. The beautifully proportioned vehicle takes on a more coupelike profile with a longer wheelbase, more interior space and very low aerodynamic drag. The XF is the second model based on Jaguar’s aluminum-intensive architecture, with weight reduced by 132 pounds for the rear-drive car and 265 pounds for the all-wheel-drive variant. 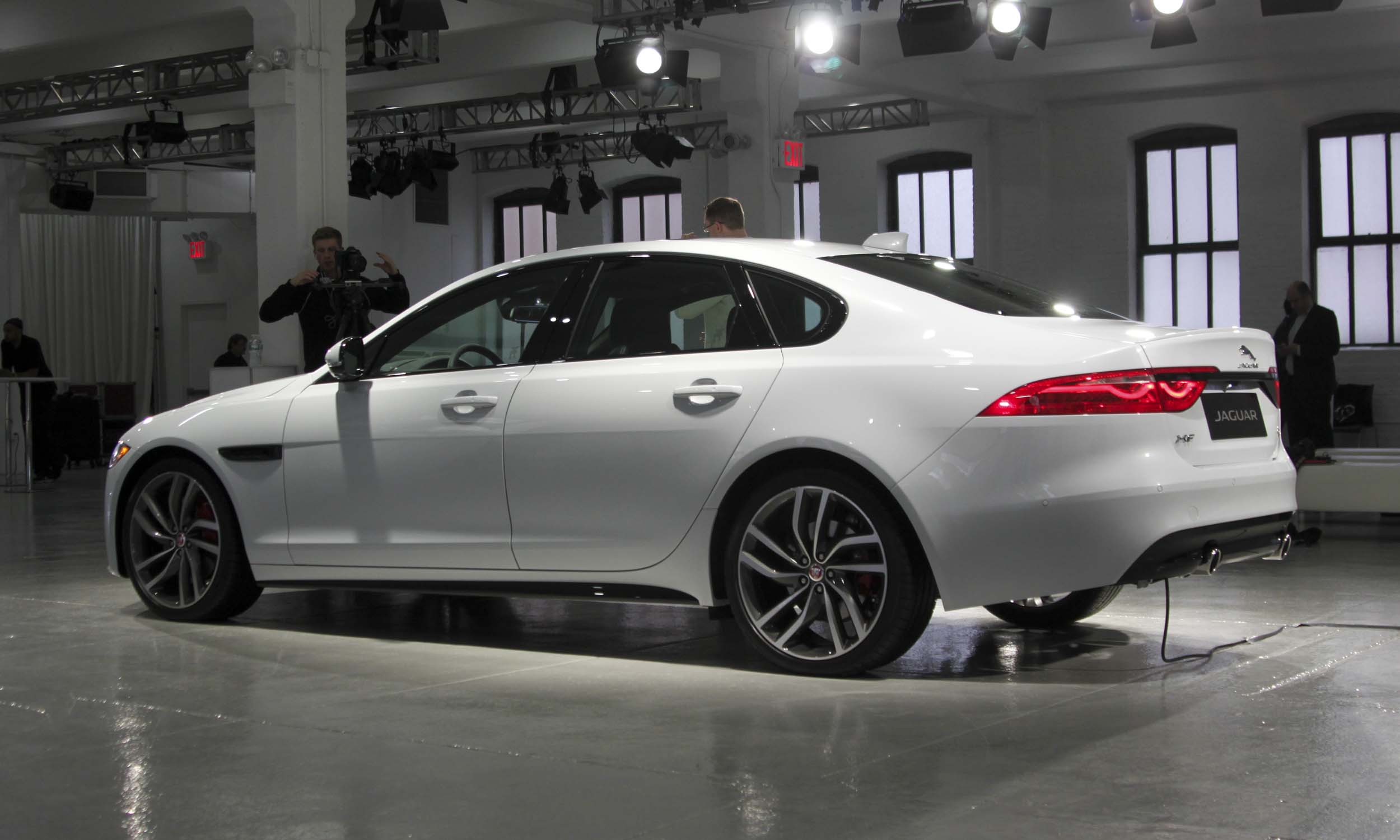 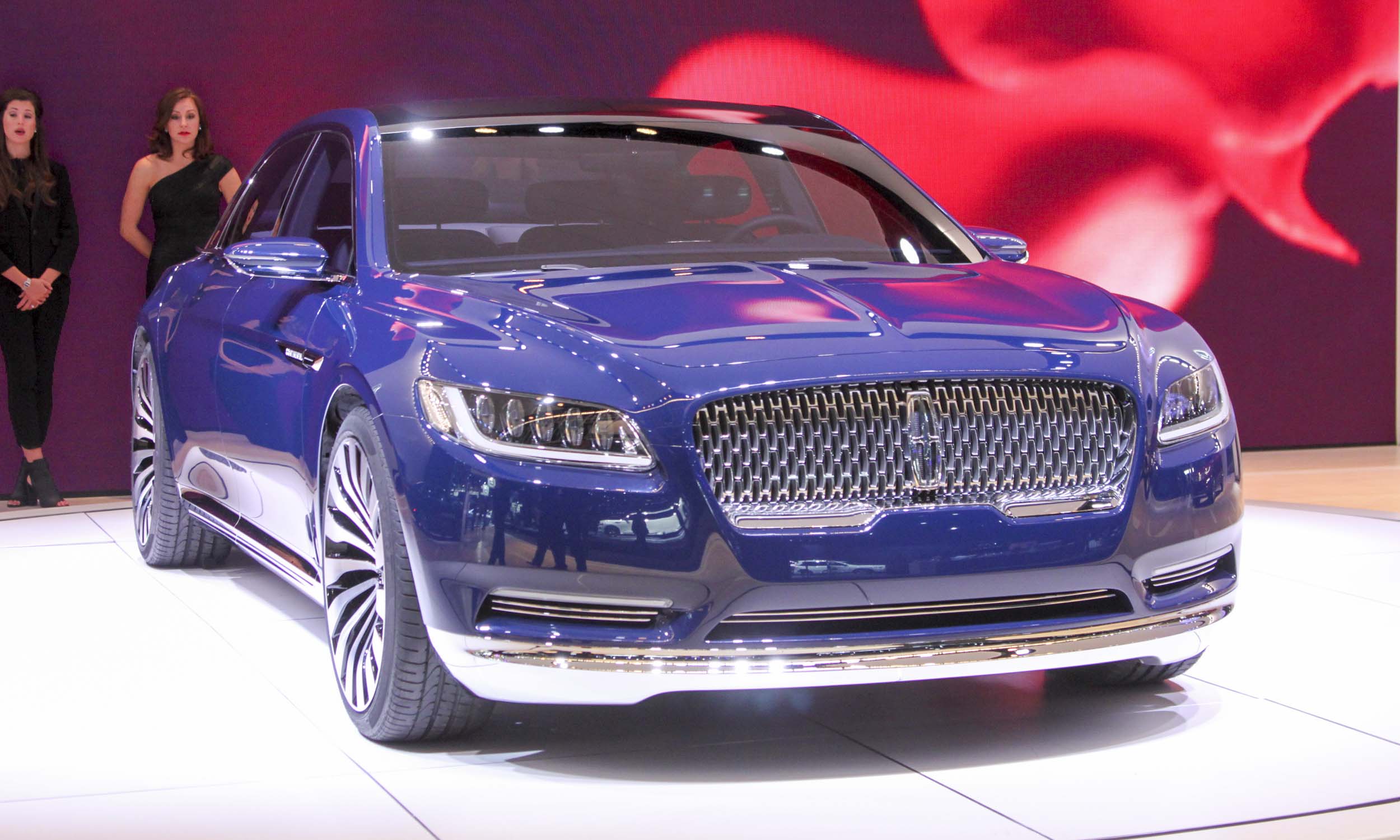 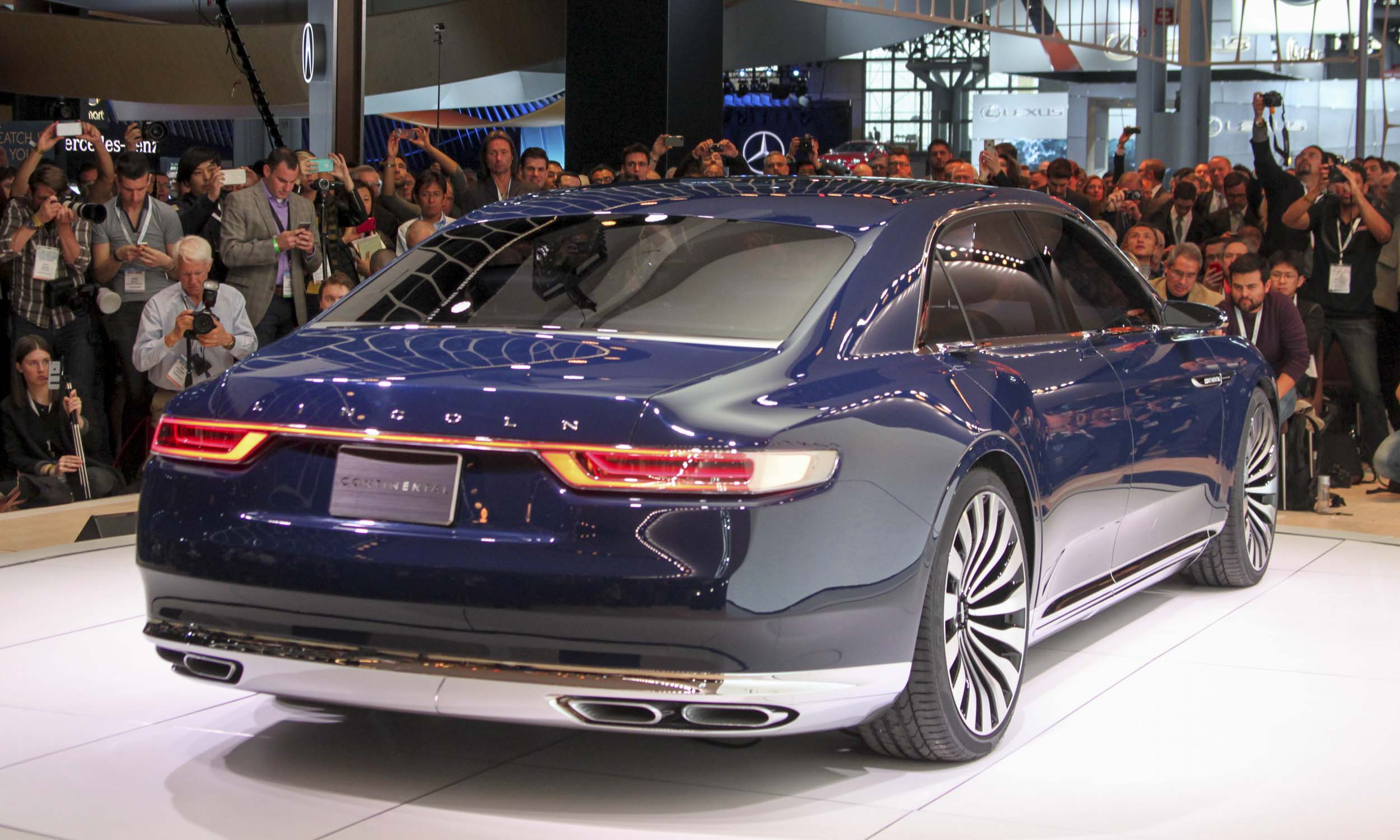 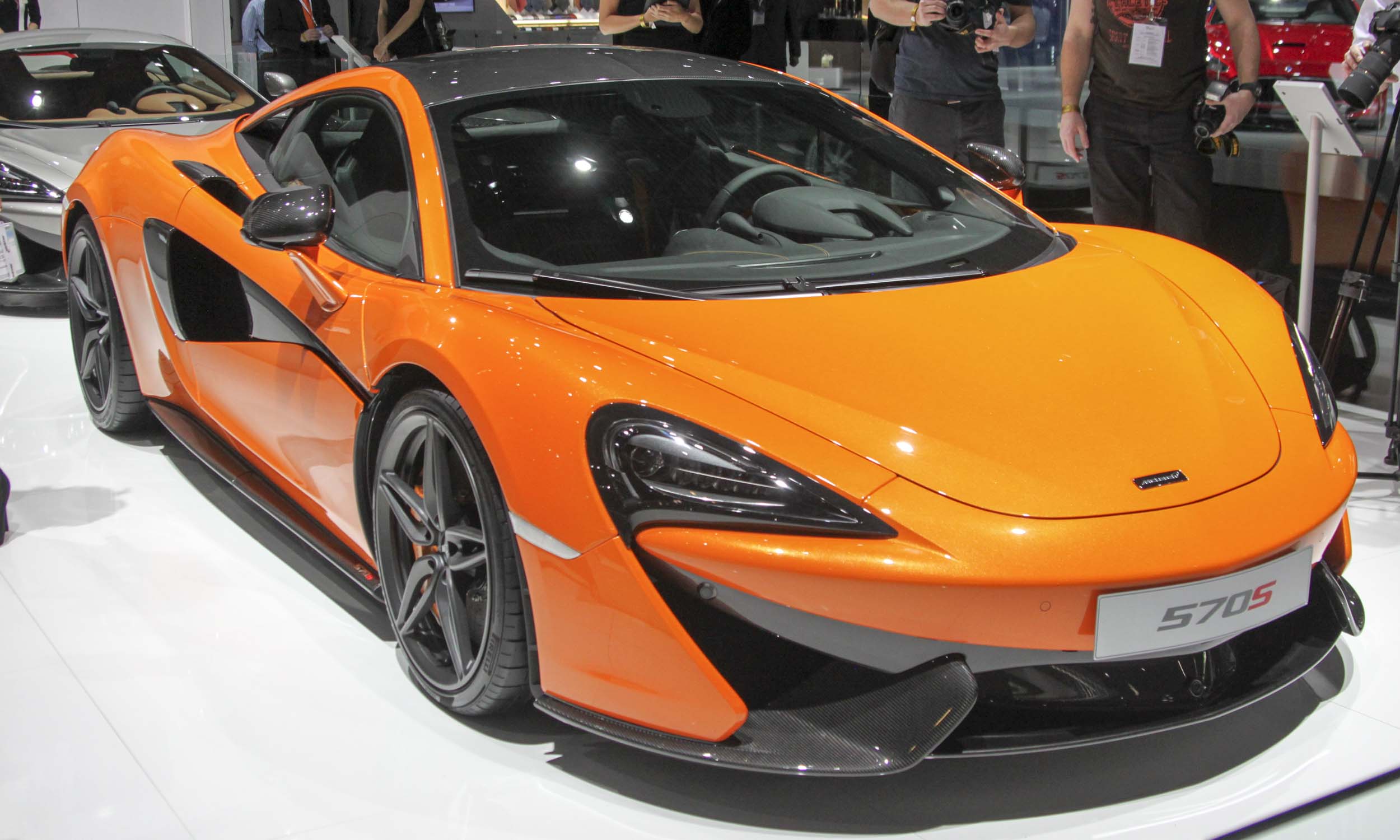 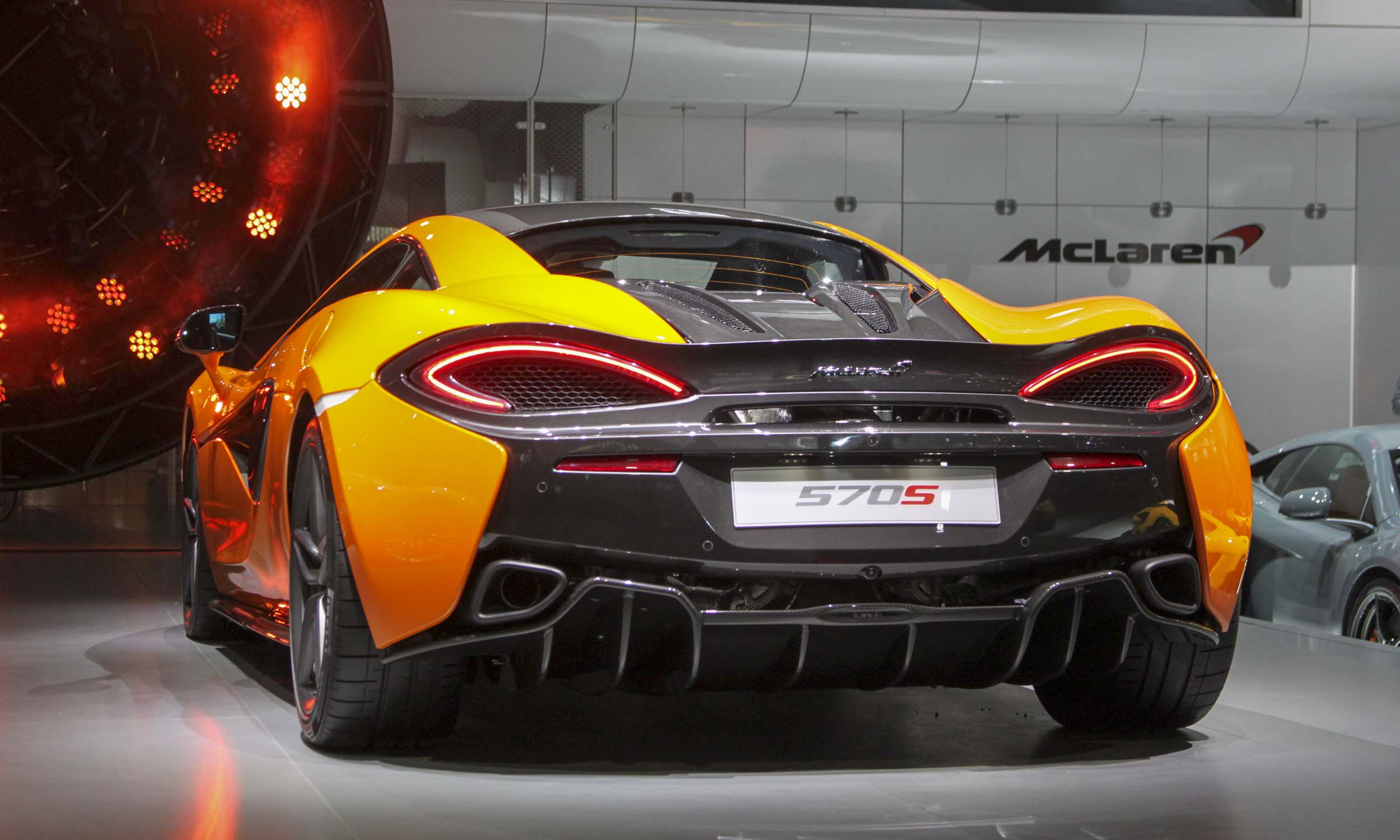 © Perry Stern, Automotive Content Experience
McLaren 570S
McLaren describes the Sport Series as more of a sports car rather than a supercar, and a car that is more usable day-to-day than previous McLaren models, while still incorporating race car technologies and supercar levels of performance. The 570S is powered by a new version of its 3.8-liter twin turbocharged V8 engine — with 30 percent new components — that produces 570 horsepower. The lightweight carbon fiber MonoCell II chassis keeps the overall weight low, and the interior has more of an emphasis on usability with improved access, a higher level of refinement than other models and more storage space. Starting price for the McLaren 570S is $184,900. 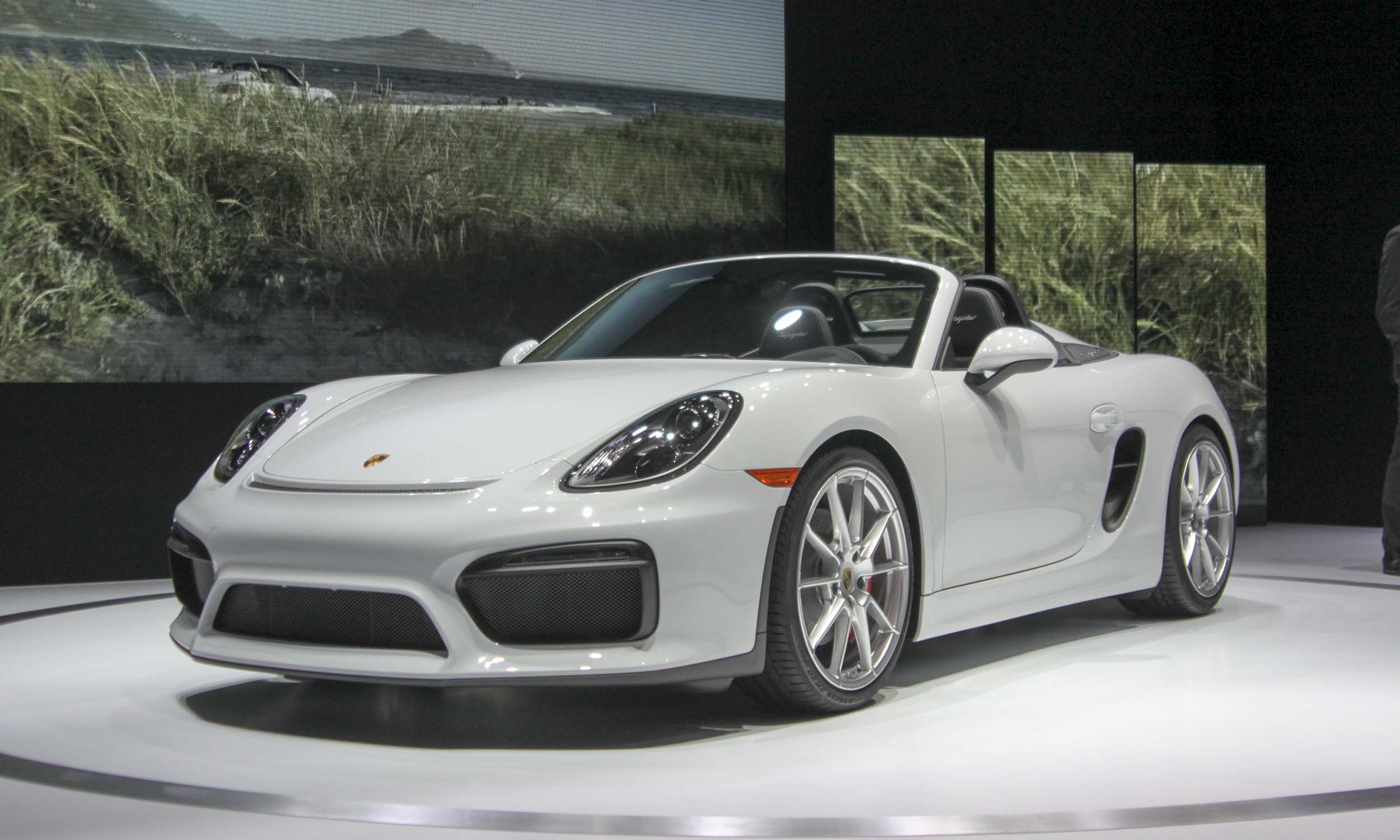 © Perry Stern, Automotive Content Experience
Porsche Boxster Spyder
In New York Porsche debuted the top version of the Boxster, targeting driving enthusiasts. With an emphasis on weight savings and driver engagement, the Boxster Spyder is only offered with a manually-operated soft- top and a 6-speed manual transmission. The Boxster Spyder features a sport-tuned suspension, lower ride height, brakes from the 911 Carrera S, more direct steering, and a 3.8-liter horizontally-opposed 6-cylinder engine producing 375 horsepower. The Boxster Spyder is the lightest version currently offered, and the most powerful Boxster ever. According to Porsche data, the Boxster Spyder will accelerate from zero to 60 mph in just 4.3 seconds and achieve a top track speed of 180 mph. 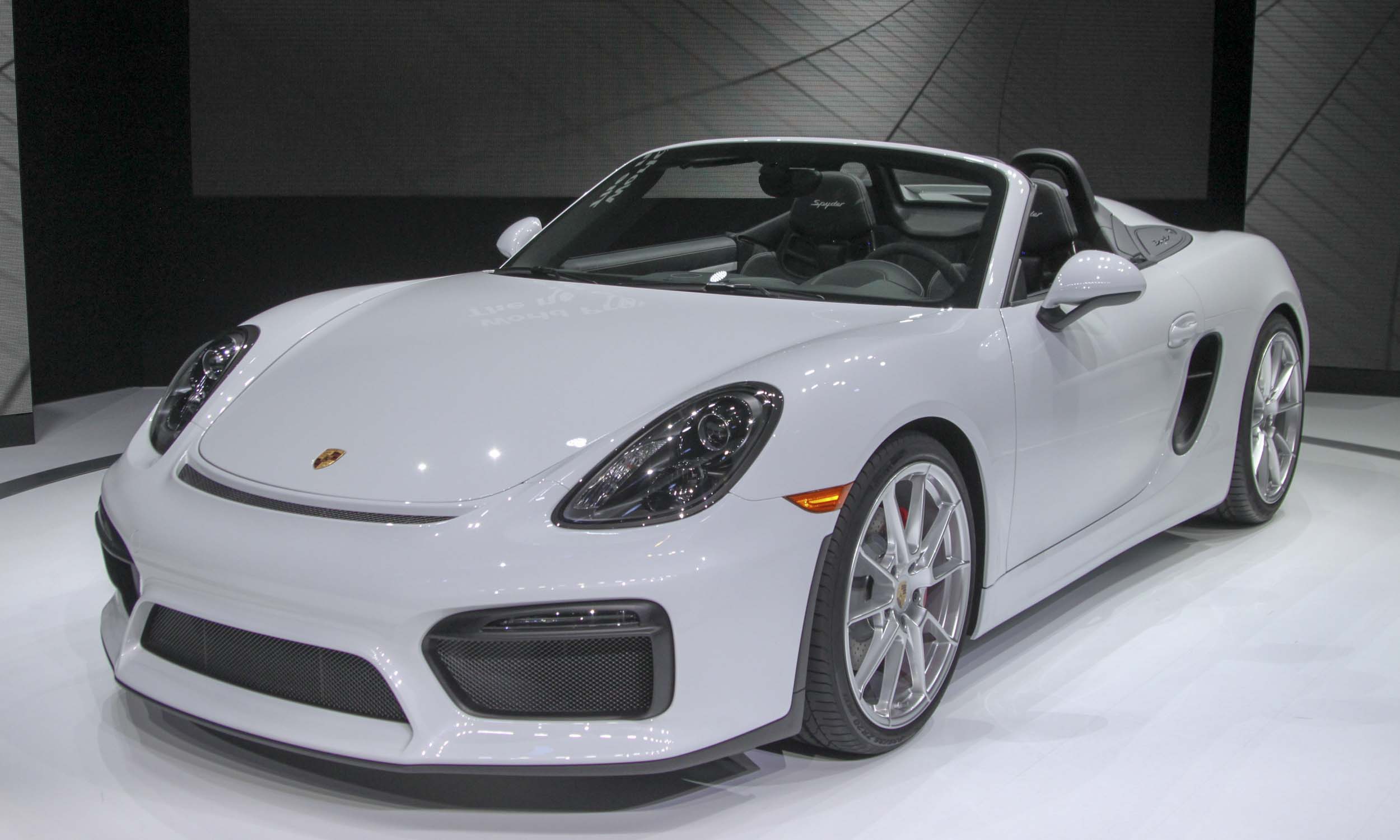 © Perry Stern, Automotive Content Experience
Porsche Boxster Spyder
The rear deck of the Boxster Spyder is reminiscent of early sports and race cars from Porsche, with the aerodynamic design extending from behind the head restraints toward the rear of the car, while the top has fins that extend back toward the rear. The front and rear fascias are unique to the Boxster Spyder, including an air outlet in front of the forward luggage compartment lid. Inside, the Spyder includes standard sport seats and a smaller diameter steering wheel. To save weight, the stereo and air conditioning are not included as standard equipment but may be ordered as options. 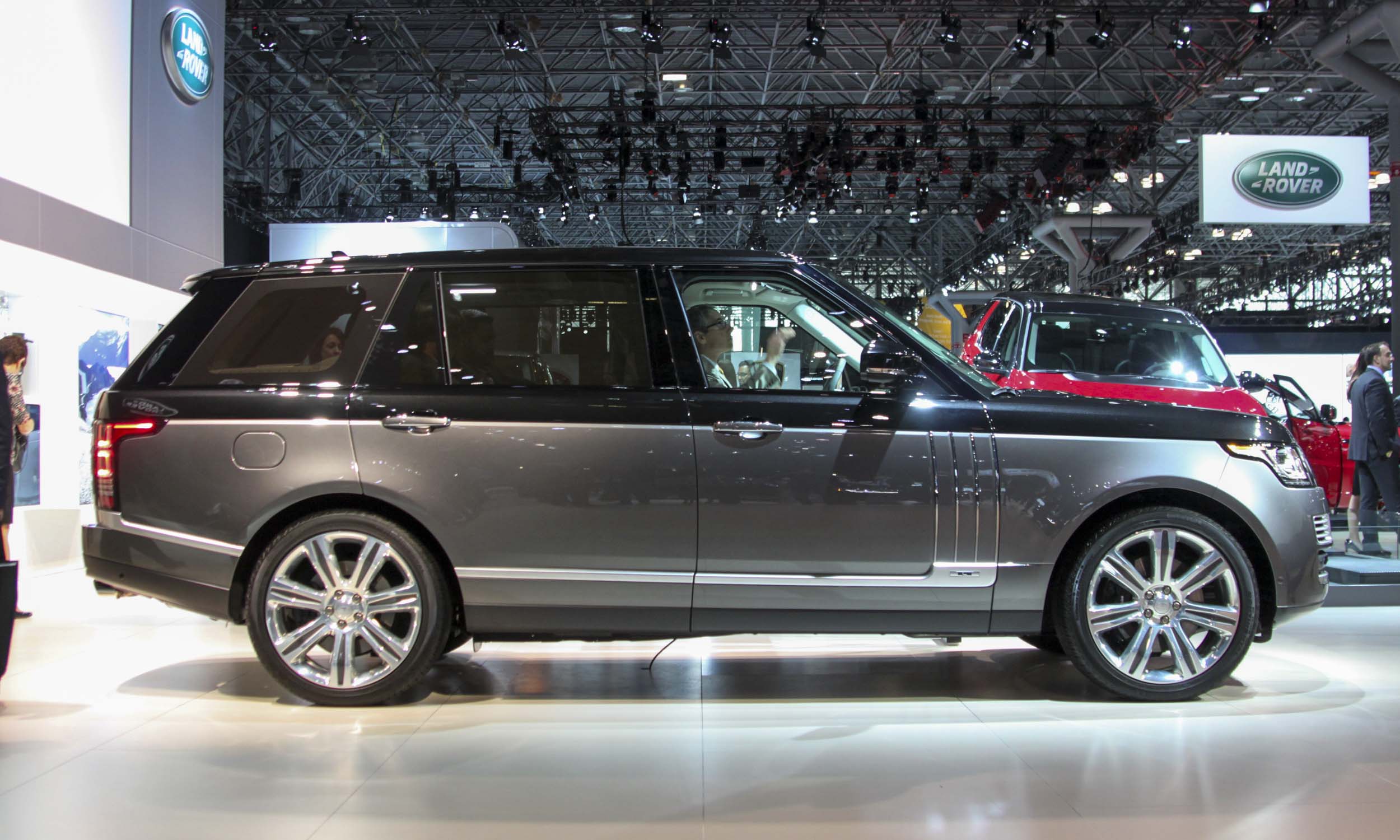 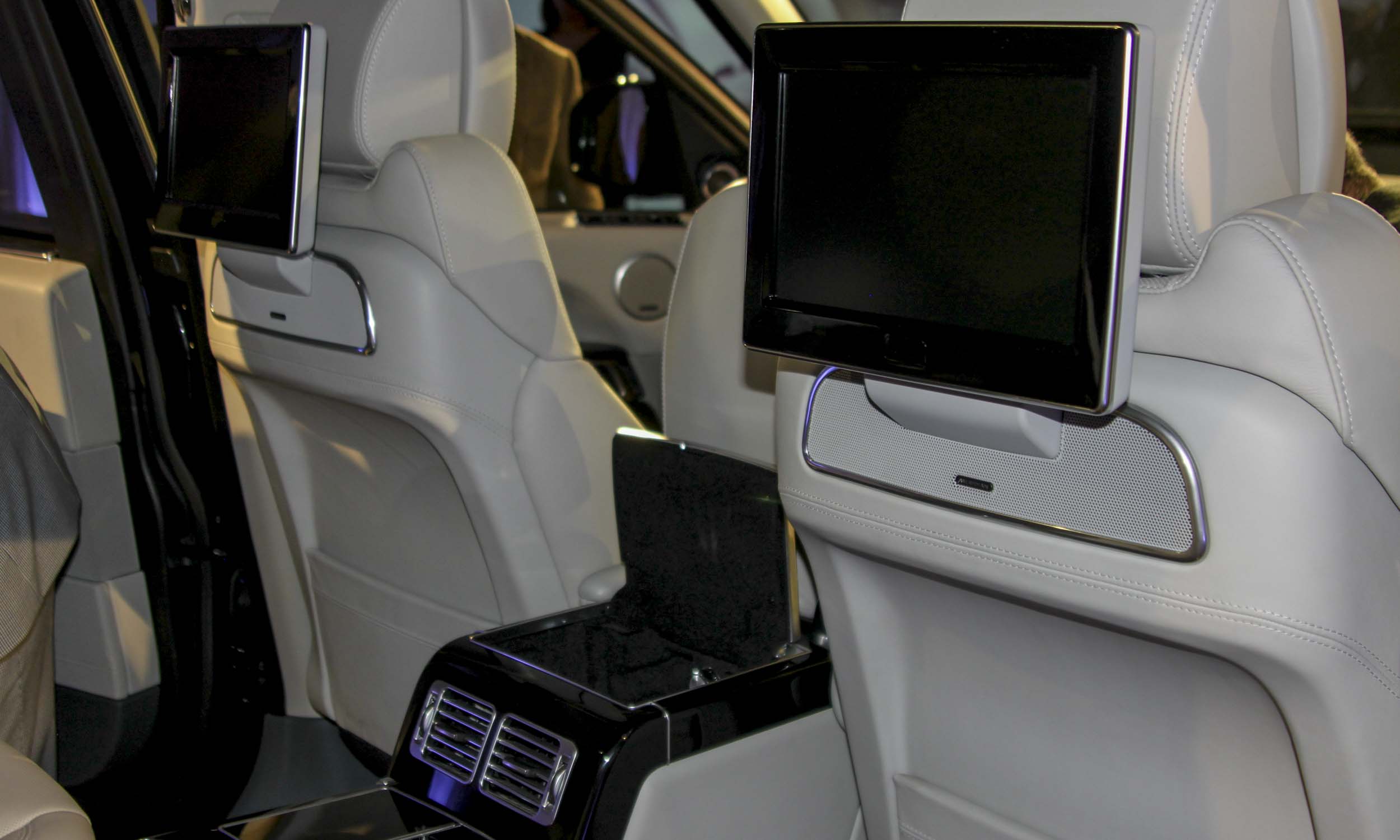 © Perry Stern, Automotive Content Experience
Land Rover Range Rover SVAutobiography
Inside, many of the SVAutobiography controls are machined from solid aluminum and feature knurled details, including the start-stop surround, rotary gear selector and pedals. The front and rear consoles as well as the armrest adjusters feature similar detailing, with special materials for the cupholder and socket covers. Rear-seat passengers enjoy luxurious seating, a beverage chiller compartment and power-deployable tables. Additional luxury details include solid aluminum coat hooks in the rear pillars, aluminum seat-rail finish and deep twist mohair carpet mats. In the cargo area, the SVAutobiography offers an optional sliding luggage floor made from aluminum, and a choice of wood veneer options. Overall, you get a lot of Range Rover for $200,000. 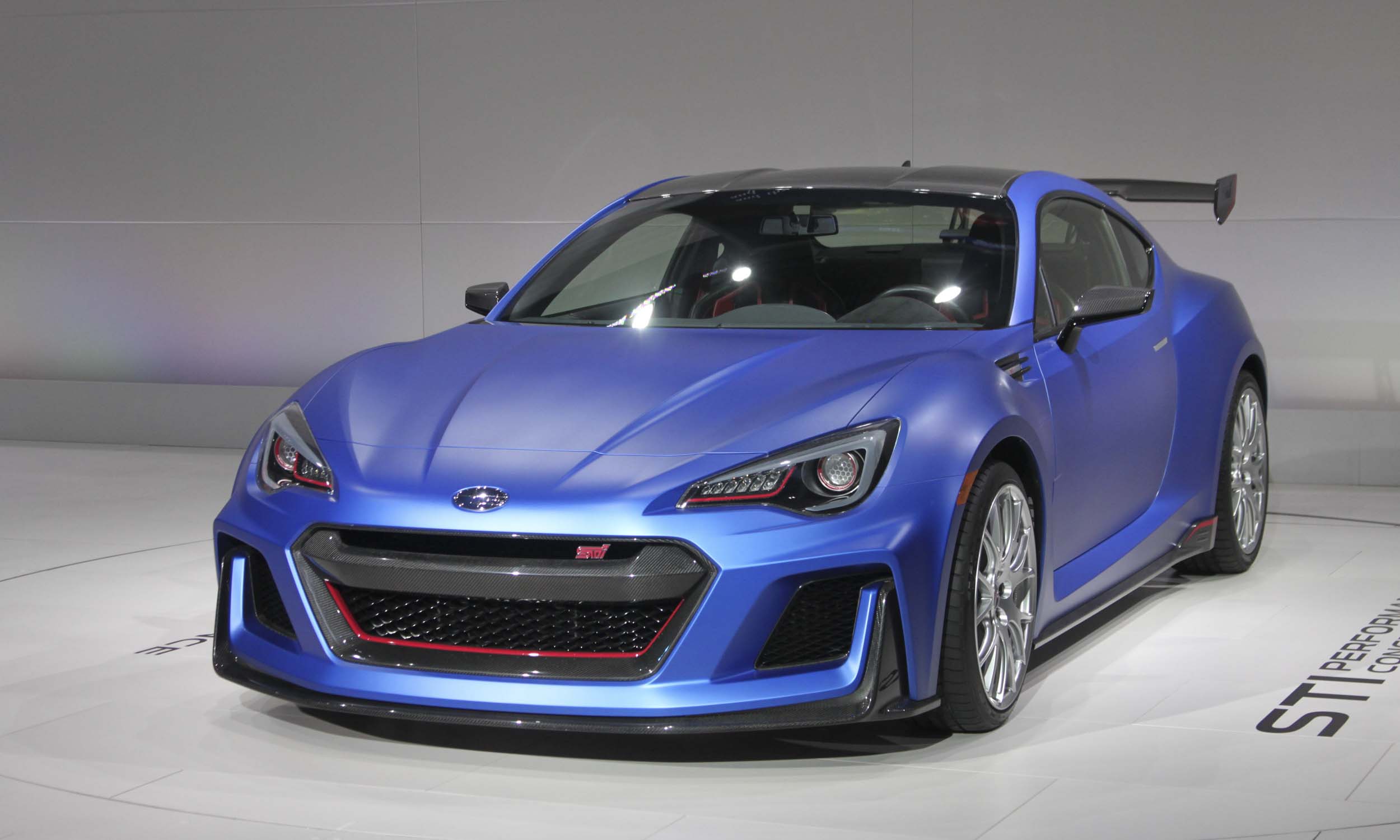 © Perry Stern, Automotive Content Experience
Subaru BRZ STI Performance Concept
Subaru unveiled the BRZ STI Performance Concept in New York, finished in flat blue with STI performance upgrades to the suspension, chassis, aerodynamics, air intake and exhaust. In America STI is synonymous with the high-performance version of the WRX; the name comes from Subaru Tecnica International (STI), the performance division of Subaru. Power for this BRZ concept comes from a racing engine developed by STI for the BRZ Super GT race car. Body modifications include wide flared fenders, an aggressive front fascia, a front splitter, a rear lip spoiler, a rear wing, an aggressive rear diffuser and dual center exhaust. We know there will be a lot of excitement around this concept but don’t get your hopes up – Subaru has no plans to build this car. 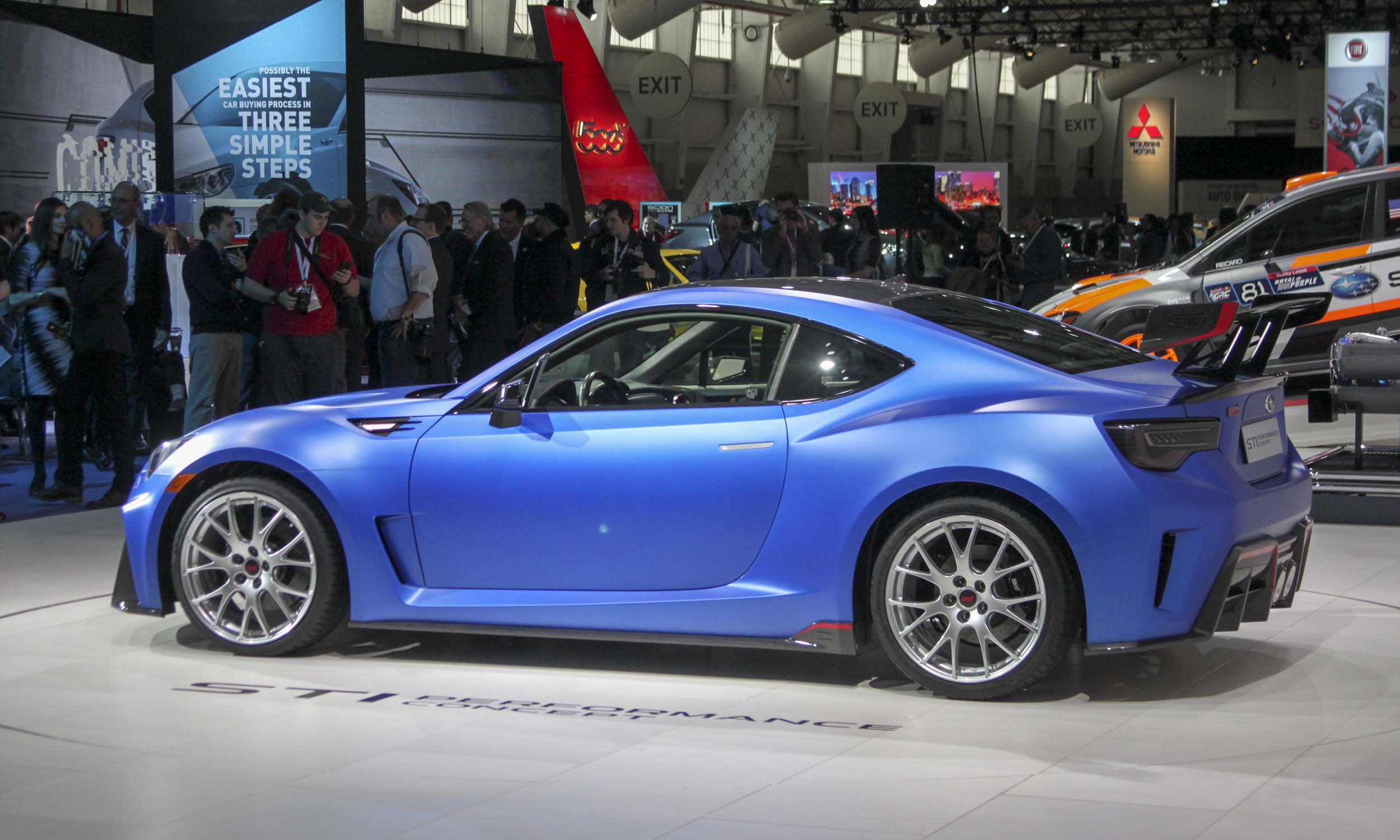 © Perry Stern, Automotive Content Experience
Subaru BRZ STI Performance Concept
In New York Subaru announced plans to offer additional models tuned by STI for the U.S. market, but did not confirm the BRZ STI at this time. The Japanese market currently gets STI-tuned models of the WRX, Forester and BRZ — which would indicate these models are most likely to be offered with STI treatment in the U.S. as well. Subaru will also begin selling STI aftermarket performance parts, replacing the Subaru Performance Tuning parts currently available through U.S. Subaru dealers. “At STI we know from our racing that to win, it is important not only to have high power, but also that all aspects of performance are balanced over the whole car,” says Yoshio Hirakawa, president of Subaru Tecnica International, Inc. “Our plan is to produce cars and accessories that drivers can really enjoy.” 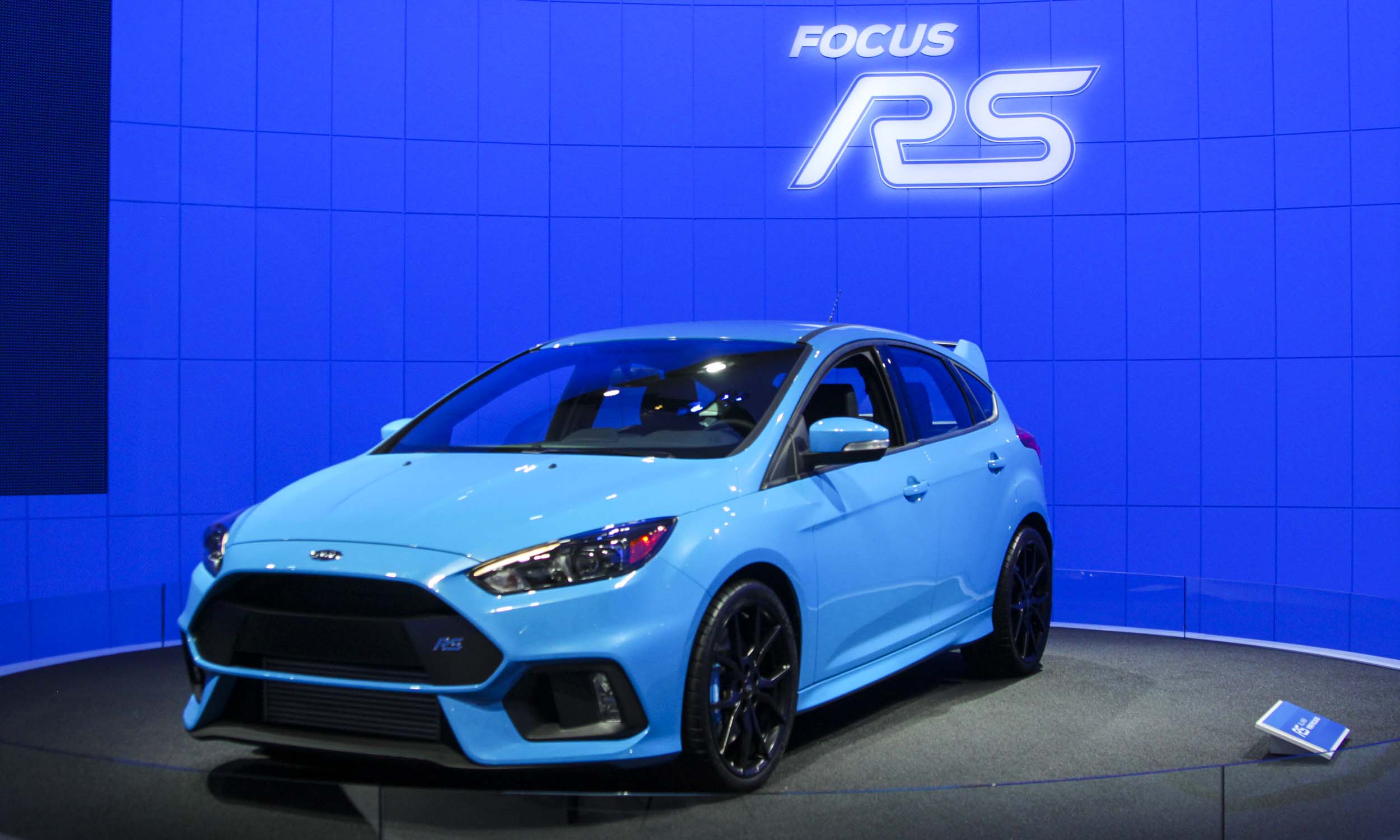 © Perry Stern, Automotive Content Experience
Ford Focus RS
For car enthusiasts, the Focus RS was one of the most interesting cars to debut last month at the Geneva show, and it’s first appearance stateside was not lost on enthusiasts here either. The RS is the latest model to come from the new Ford Performance Group, and it occupies the top of the Focus lineup. With a sophisticated all-wheel-drive system and a new EcoBoost engine expected to deliver more than 320 horsepower, the Focus RS is a serious sports car, ready to compete with the Subaru WRX STI and Volkswagen Golf R. 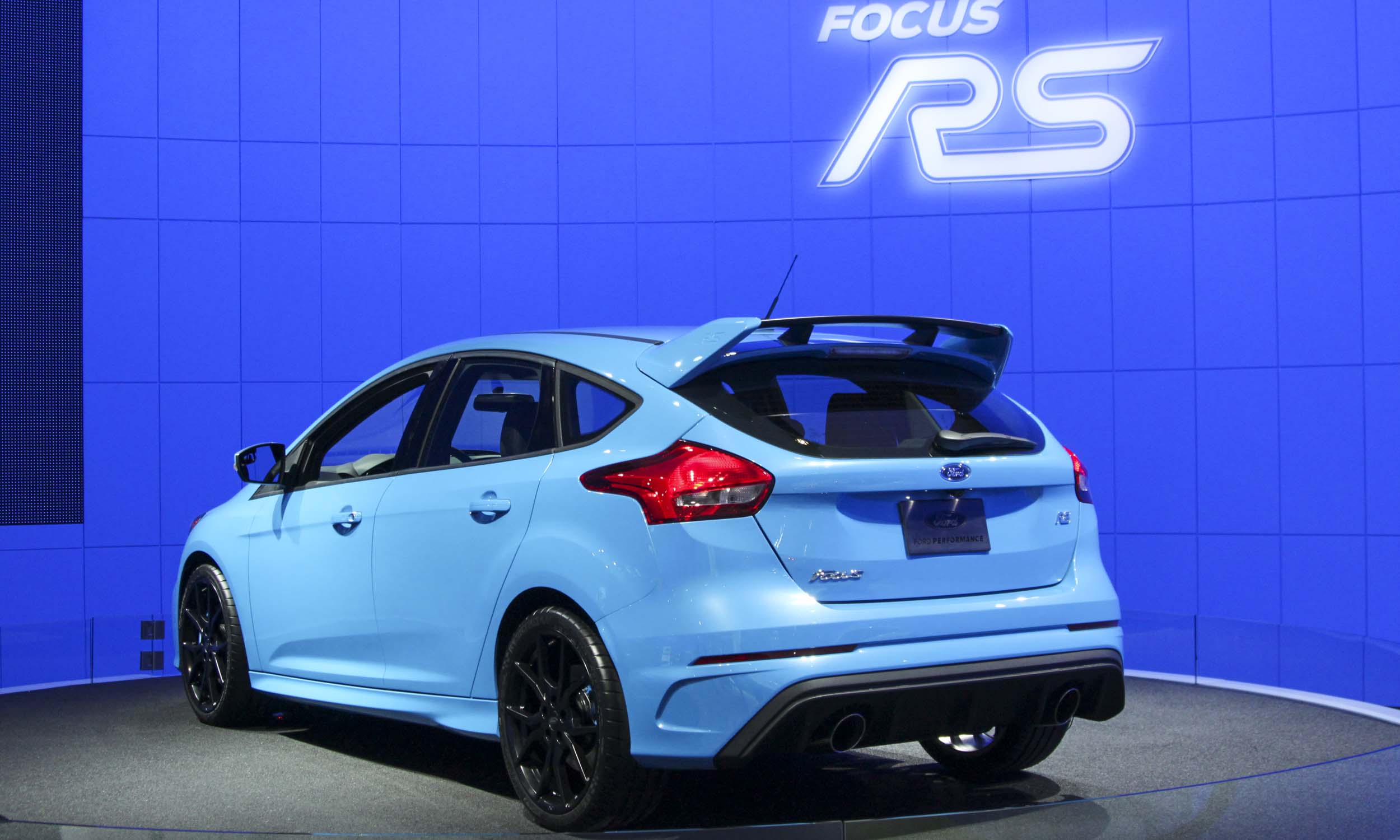 © Perry Stern, Automotive Content Experience
Ford Focus RS
The Focus RS offers a number of innovations, including four settings for the AWD system, with one of them being a “drift mode.” With a bold grille, rear spoiler, large brakes and unique alloy wheels, it will be easy to notice this special Focus. Pricing information has not been released, but we’re told the Focus RS will arrive in U.S. showrooms before the end of 2015.

One thought on “2015 New York Auto Show: Luxury and Performance”