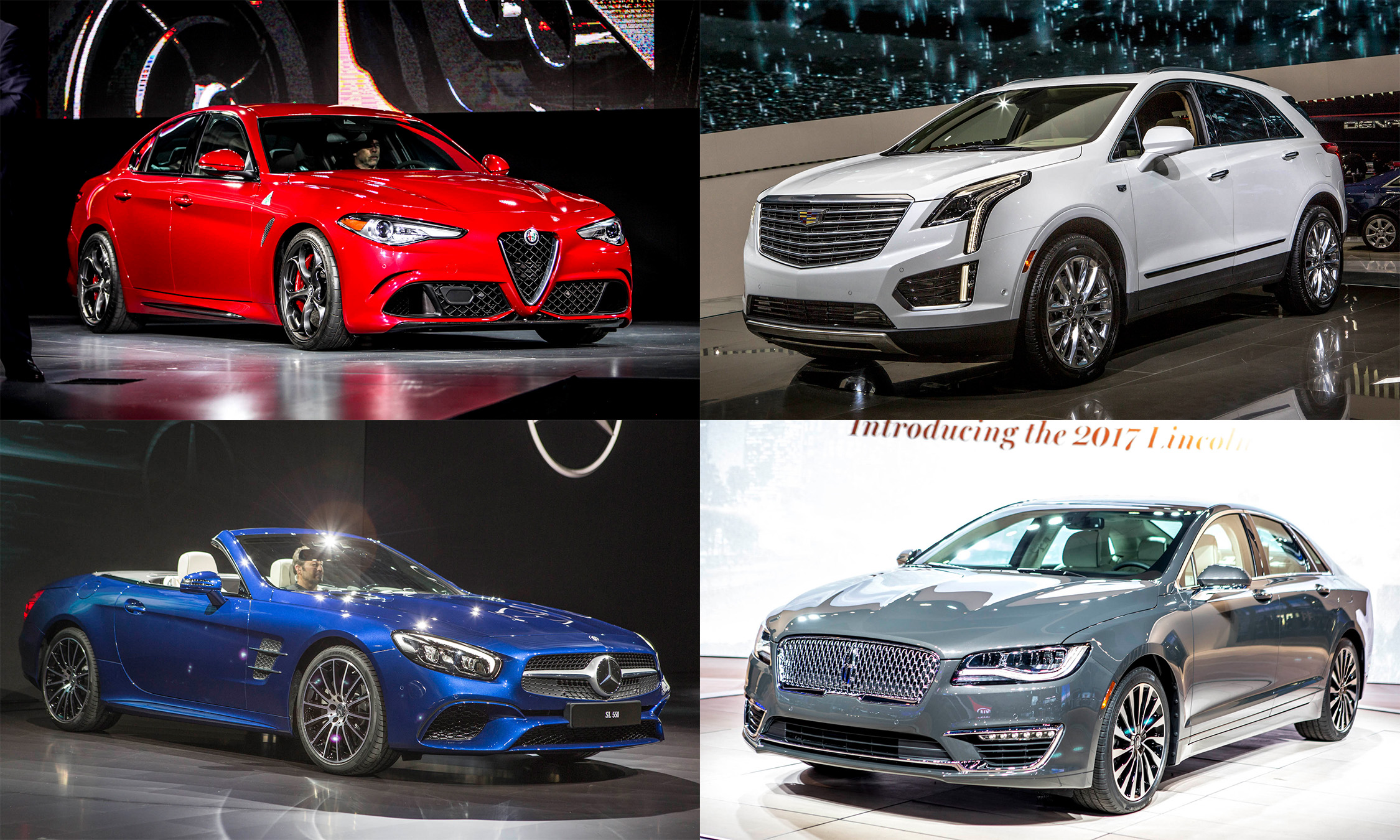 Walking in L.A.
A wide variety of new vehicles premiered November 18–19 at the 2015 Los Angeles Auto Show during the press preview, ranging from basic transportation to high-performance supercars. After two days and several miles of meandering throughout the L.A. Convention Center, we present what’s new in the upper echelons of the market — a look at luxury and performance vehicles — eventually appearing at a showroom near you. 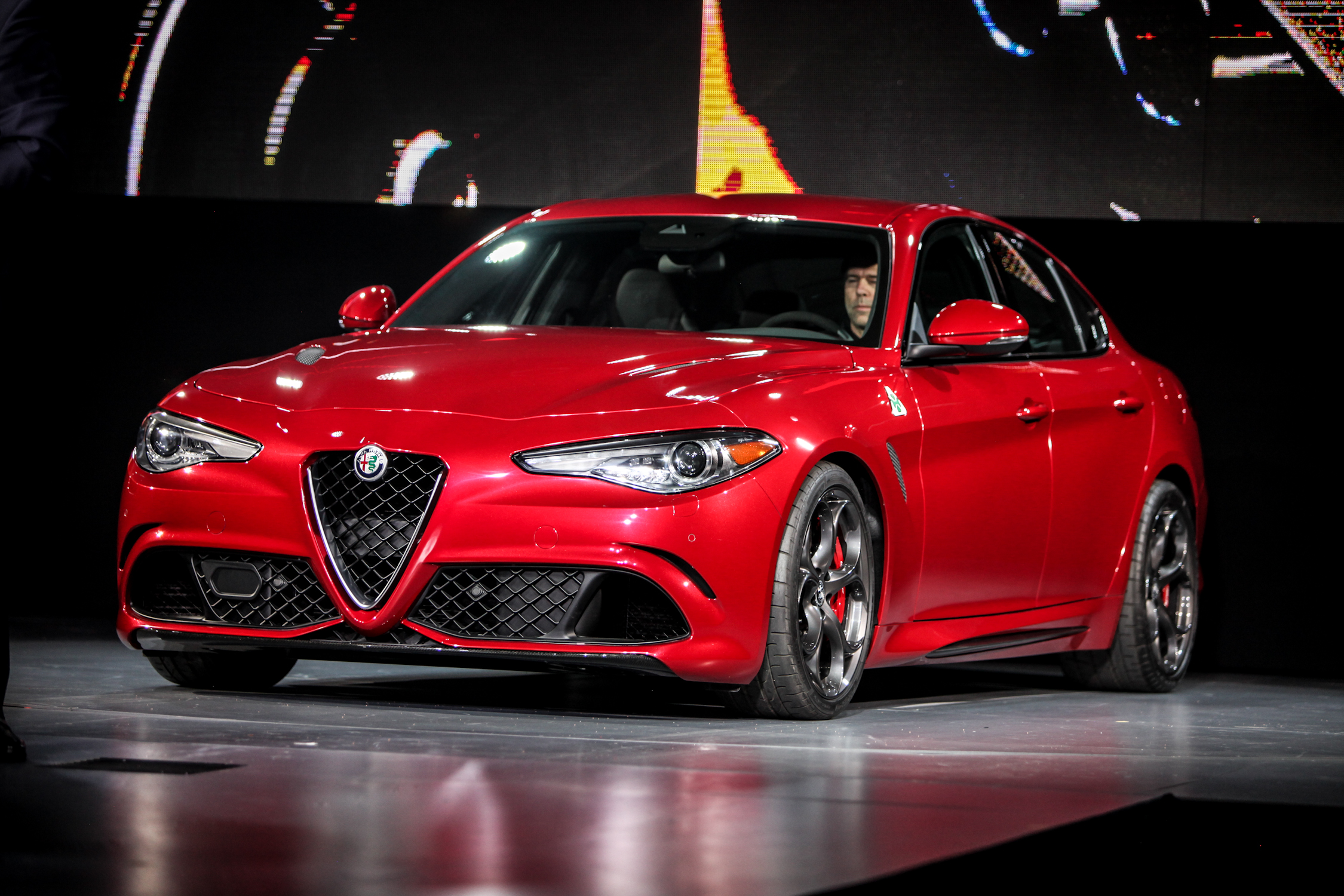 2017 Alfa Romeo Giulia Quadrifoglio
The Italian automaker continues its measured reentry into the U.S. market with the all-new Giulia. Following the Alfa Romeo 4C coupe and roadster, the Giulia Quadrifoglio is a high-performance midsize luxury sedan designed to compete with some of the best offerings from Europe and America. “The all-new Giulia is not just a new car, but an entirely new benchmark that represents the next chapter in Alfa Romeo’s rich 105-year heritage,” said Reid Bigland, president and CEO of Alfa Romeo North America. 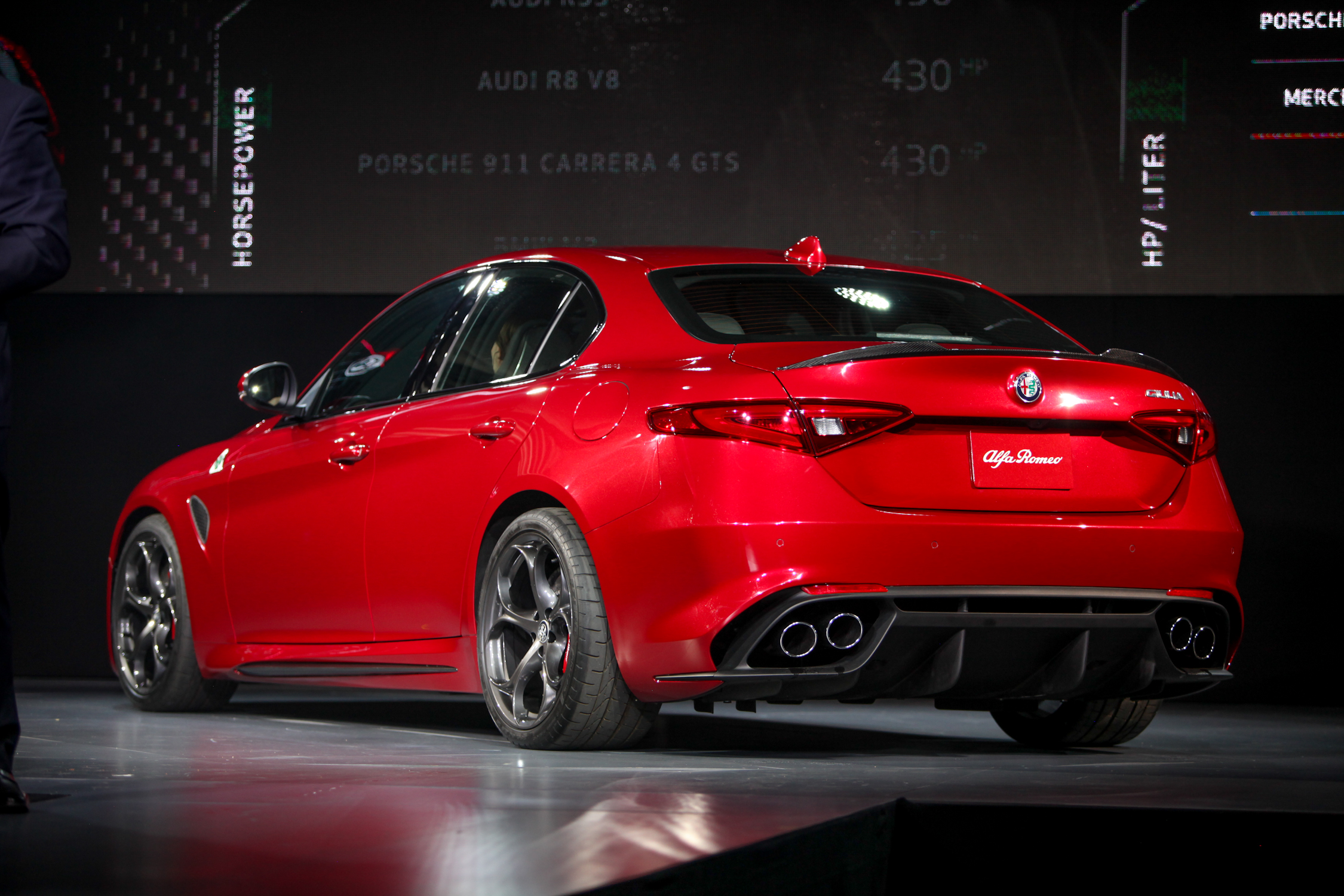 2017 Alfa Romeo Giulia Quadrifoglio
The Giulia Quadrifoglio boasts a Ferrari-sourced twin-turbo V6 engine that puts out an impressive 505 horsepower. With so much power and extensive use of lightweight materials, the Giulia can reach 60 mph in under four seconds. Even more impressive is the Giulia’s 7:39 lap time around the famed Nurburgring racetrack in Germany, making it the fastest production 4-door sedan to complete the circuit. The Giulia Quadrifoglio is expected to retail for $70,000 when it goes on sale late in 2016. The Quadrifoglio will be joined by a more mainstream Giulia with a 276-horsepower engine and starting price around $40,000. 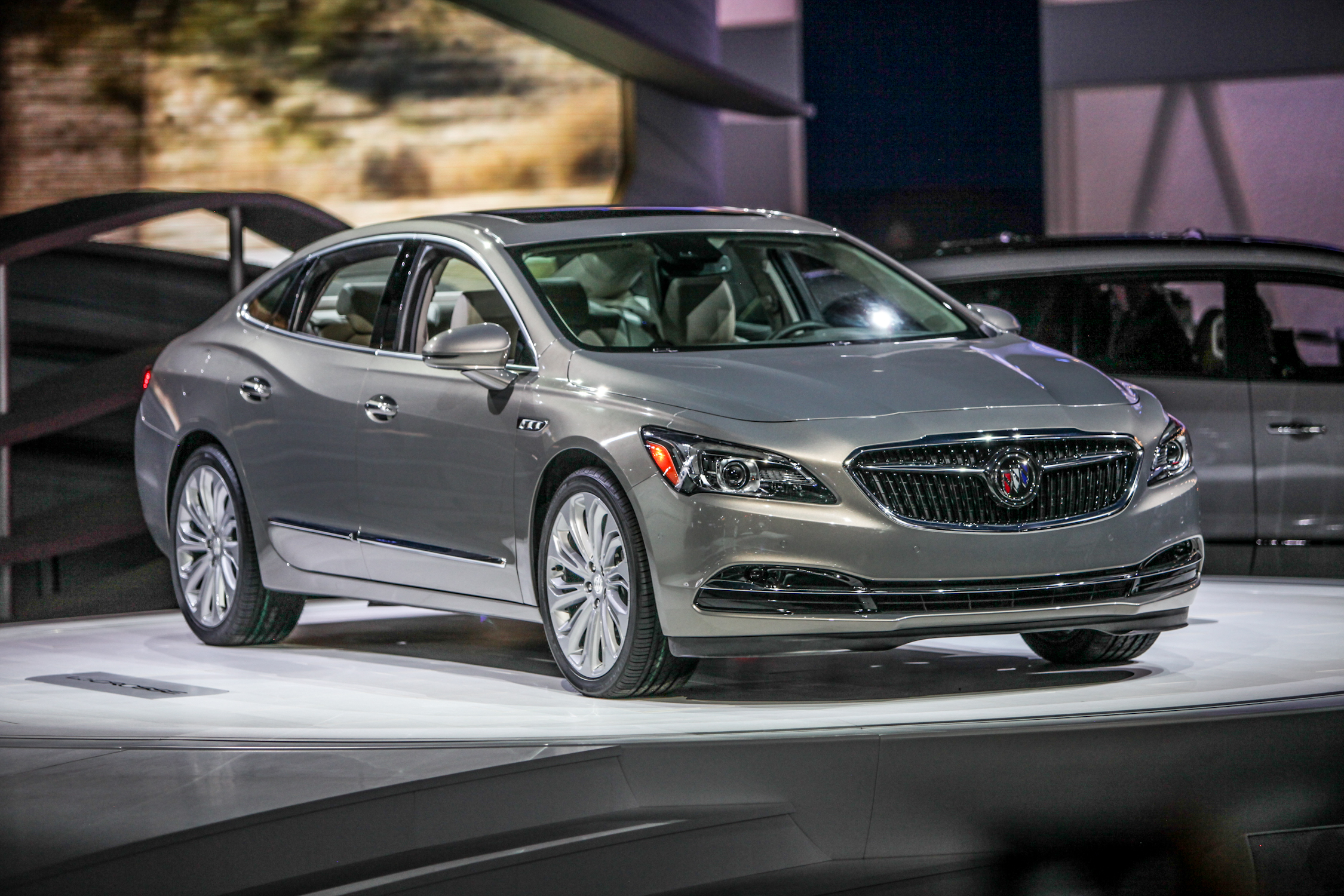 2017 Buick LaCrosse
A new Buick LaCrosse made its world debut in the City of Angels. In addition to the midsize Buick’s fresh exterior styling, the model is longer, lower and wider than the current LaCrosse. With a new lightweight yet stronger structure, the latest version is about 300 pounds lighter than the outgoing model. LaCrosse, which goes on sale in the summer of 2016, also features new sound-absorbing materials, making the brand’s signature Quiet Tuning even quieter. 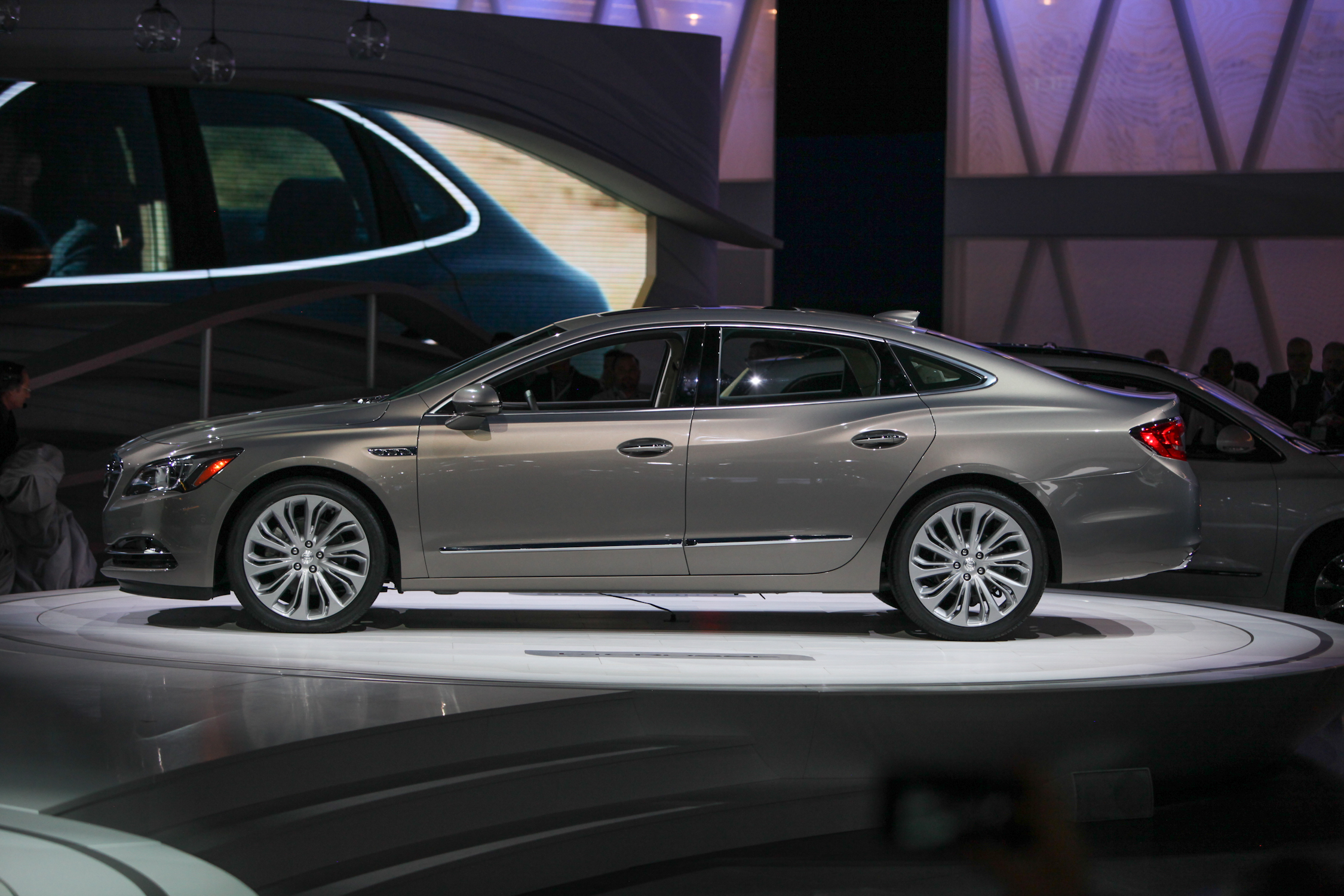 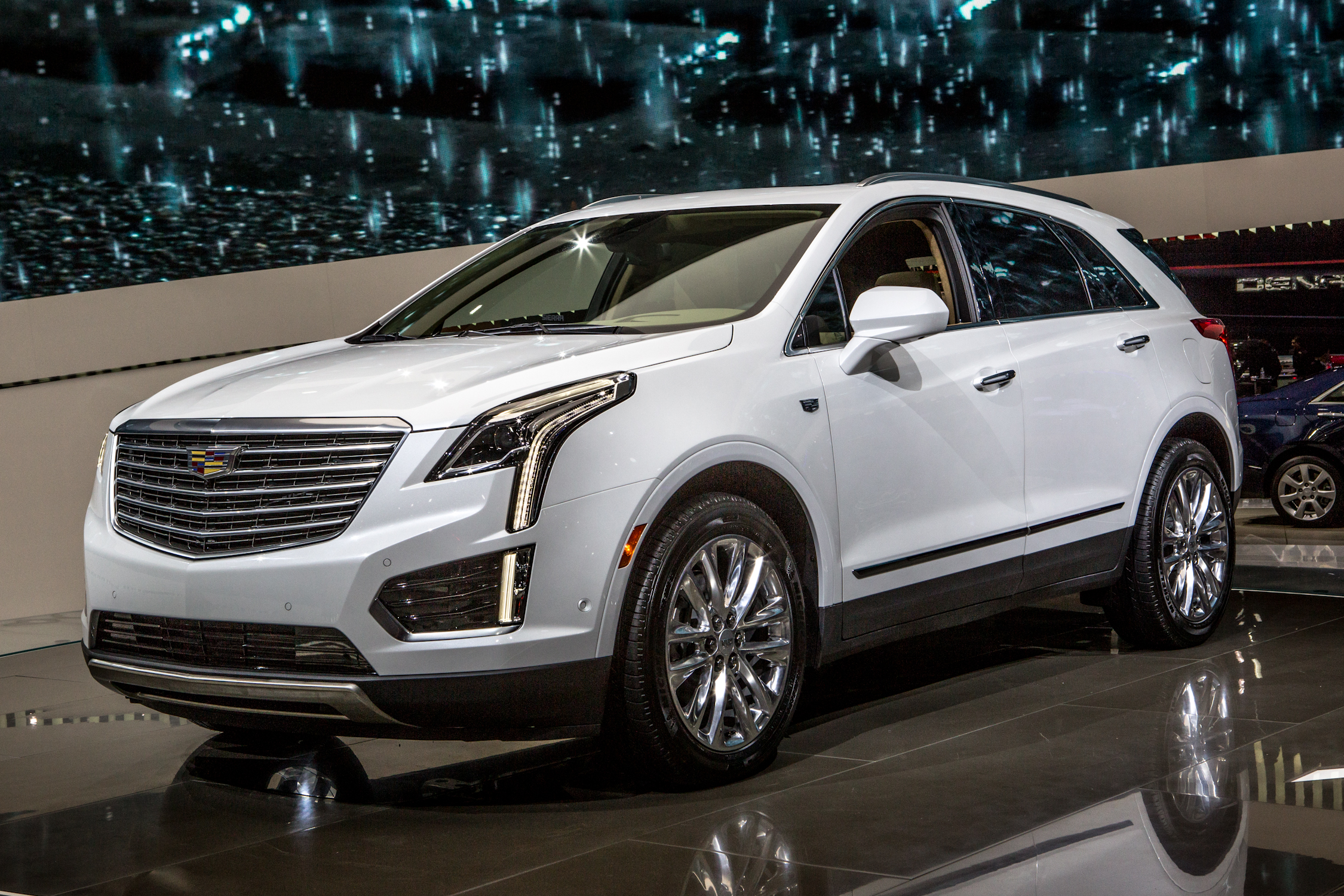 2017 Cadillac XT5
The latest all-new model to join the Cadillac lineup is this Crossover Touring 5. Replacing the aging SRX, the XT5 features the same design language we’ve seen on the recent Cadillac models. “The all-new XT5 not only enters the most popular segment in the worldwide luxury auto market, it is the first of four new crossovers from Cadillac,” said Cadillac President Johan de Nysschen. “It’s pivotal to our ongoing growth, which is why we’ve developed XT5 from the inside out to provide customers more space, more technology, more luxury and more efficiency,” he noted. 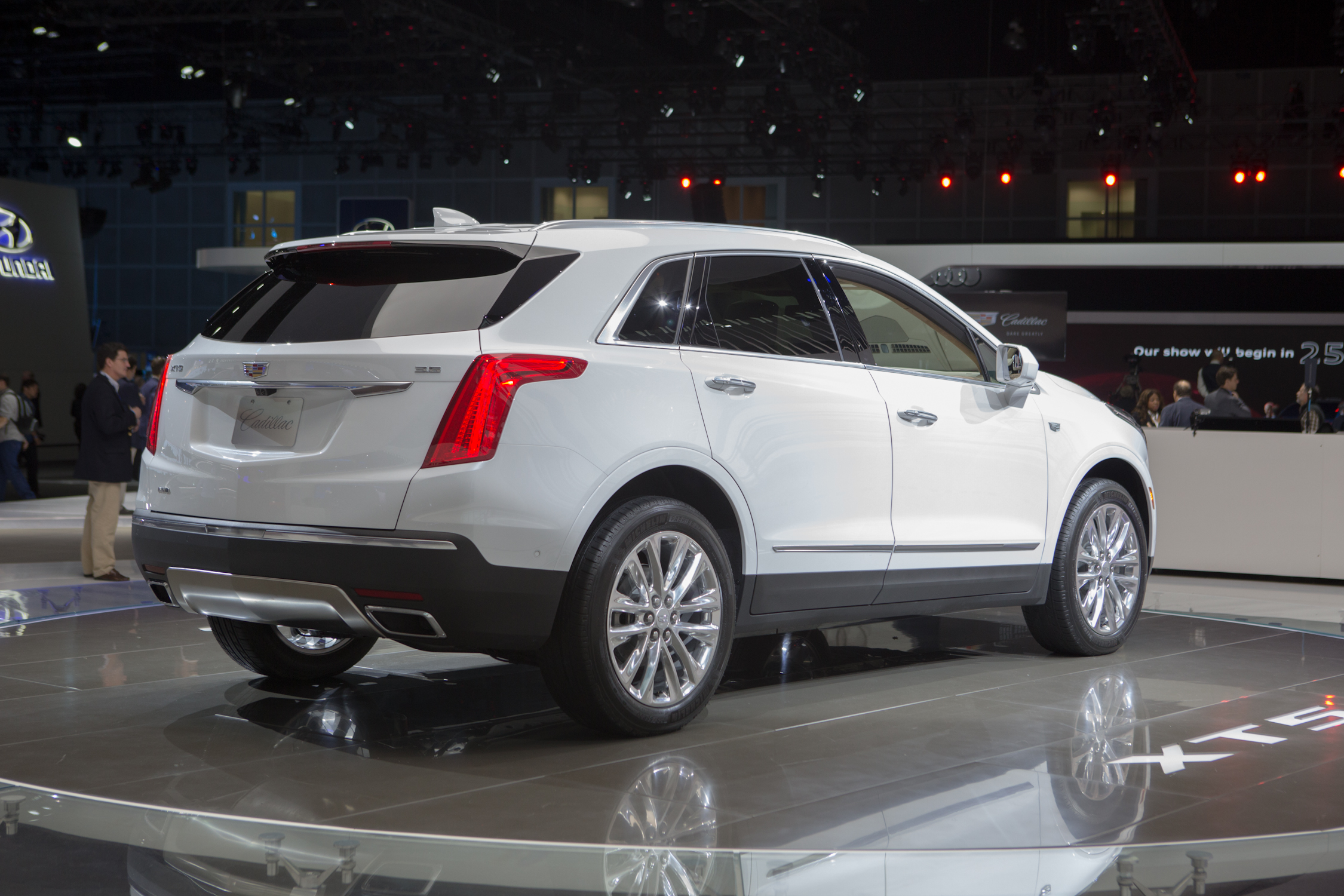 2017 Cadillac XT5
Roomier and lighter than the SRX, the XT5 boasts a number of high-tech safety and convenience features such as a Rear Camera Mirror system. A video display in the rearview mirror gives the driver an unobstructed view behind the vehicle, which Cadillac says increases a driver’s rearward vision by 300 percent. The CUE interface system has also been improved for the XT5. Power will come from a 310-horsepower 3.6-liter V6 engine teamed with an 8-speed automatic transmission. XT5 will be available with either front- or all-wheel drive when it goes on sale next spring. 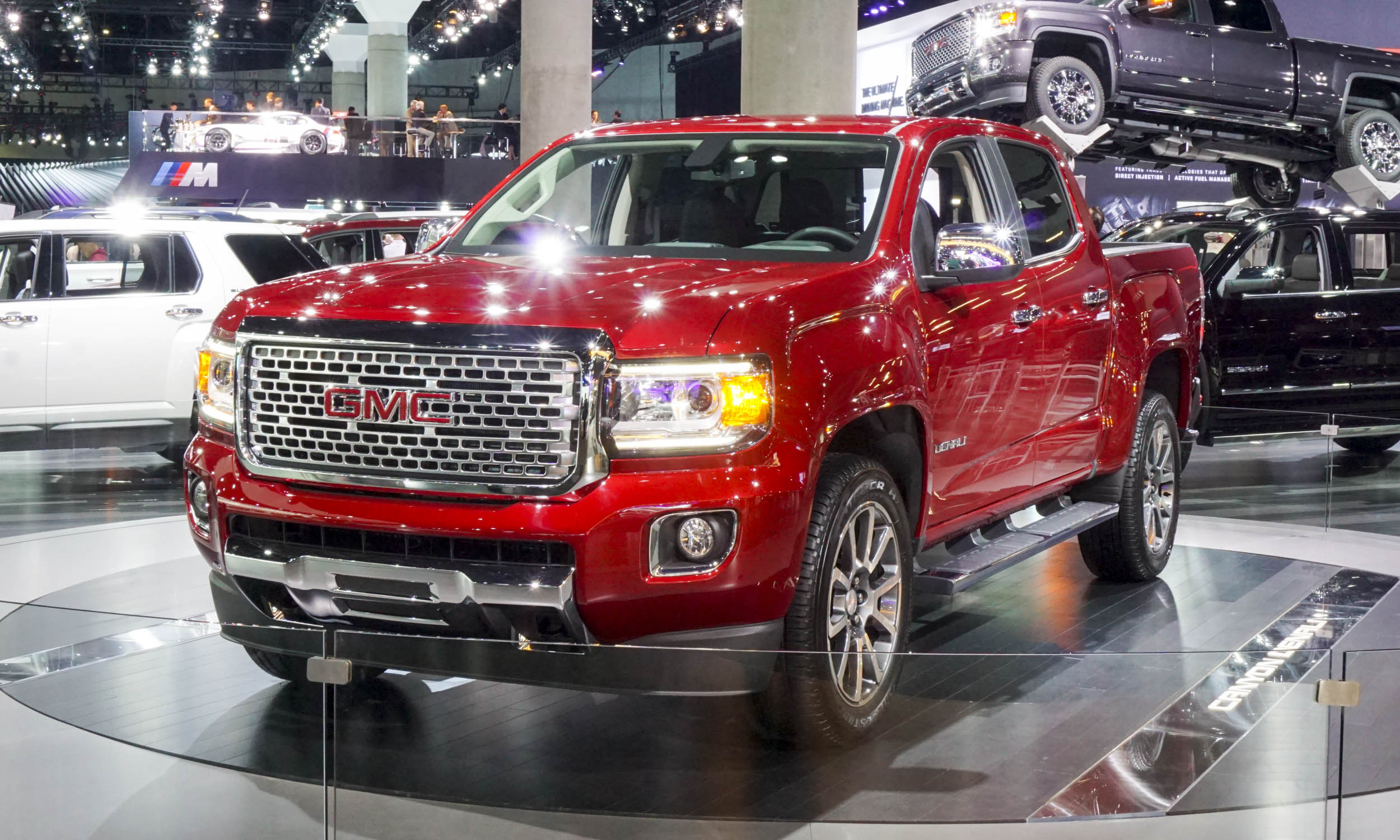 2017 GMC Canyon Denali
It may seem odd to showcase a pickup truck in our collection of luxury/performance vehicles, but this GMC Canyon is the latest model to become part of the brand’s premium Denali line. Like all Denali models, the new Canyon Denali stands out from the standard version with a chrome grille and unique wheels — 20-inch ultra-bright-machined aluminum wheels with painted accents. Other special design elements include chrome fog lamp bezels, 5-inch-diameter rectangular chrome assist steps, a polished exhaust tip and a standard spray-in bed liner. 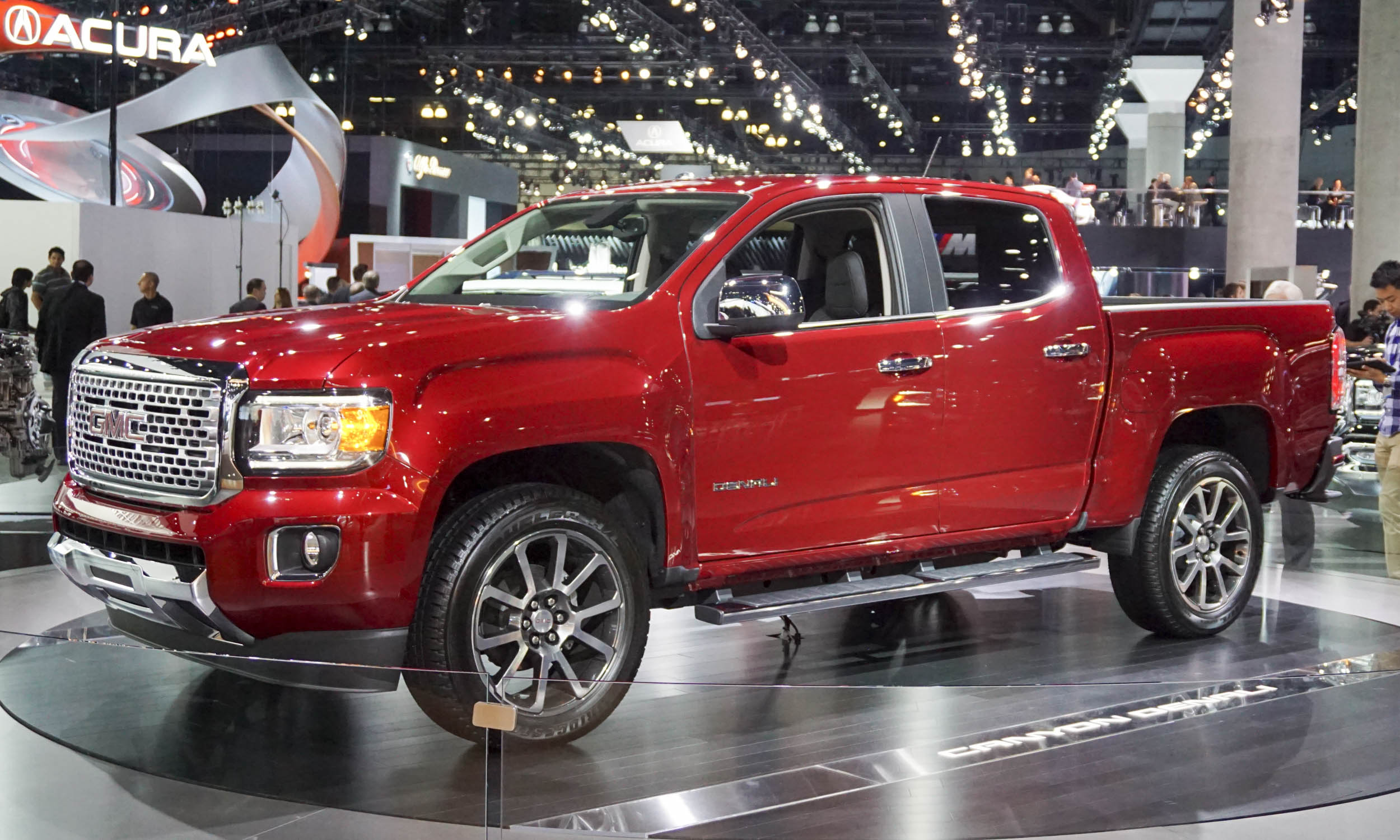 2017 GMC Canyon Denali
Inside Canyon Denali are heated and cooled Jet Black leather seats, a special instrument panel and a slew of high-tech safety and entertainment features. These include Forward Collison Alert, Lane Departure Warning as well as GMC IntelliLink with navigation, an 8-inch-diagonal color touchscreen and phone integration with Apple CarPlay and Android Auto. Canyon Denali is offered exclusively as a 4-door crew cab and can be equipped with rear- or four-wheel drive. GMC’s new diesel is one of the available powerplants, offering an impressive 7,700-pound towing capability and an estimated fuel economy rating of 31 mpg on the highway with two-wheel drive. 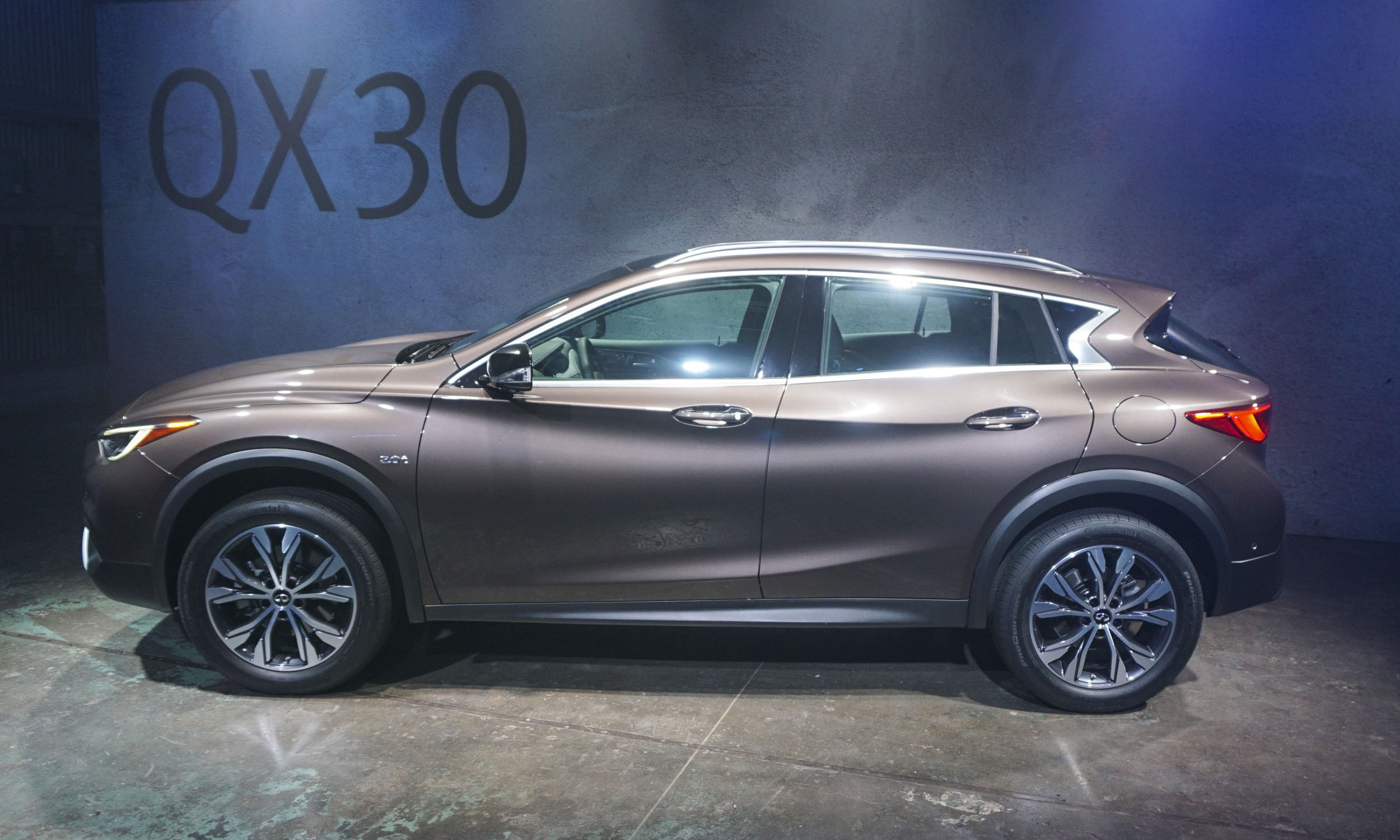 2017 Infiniti QX30
The latest crossover from Nissan’s luxury brand is the all-new QX30. The compact premium crossover carries the familiar Infiniti designs seen on previous new models. Demonstrating that this is indeed a global vehicle, the QX30 had a nearly-simultaneous reveal at the Guangzhou Motor Show in China and will be built at the company’s new facility in Sunderland, United Kingdom. “With our recent sales successes and record growth, the current product offensive will further strengthen Infiniti’s global market position. The active crossover, QX30, will broaden our offer to new customers around the world,” noted Roland Krueger, president of Infiniti. 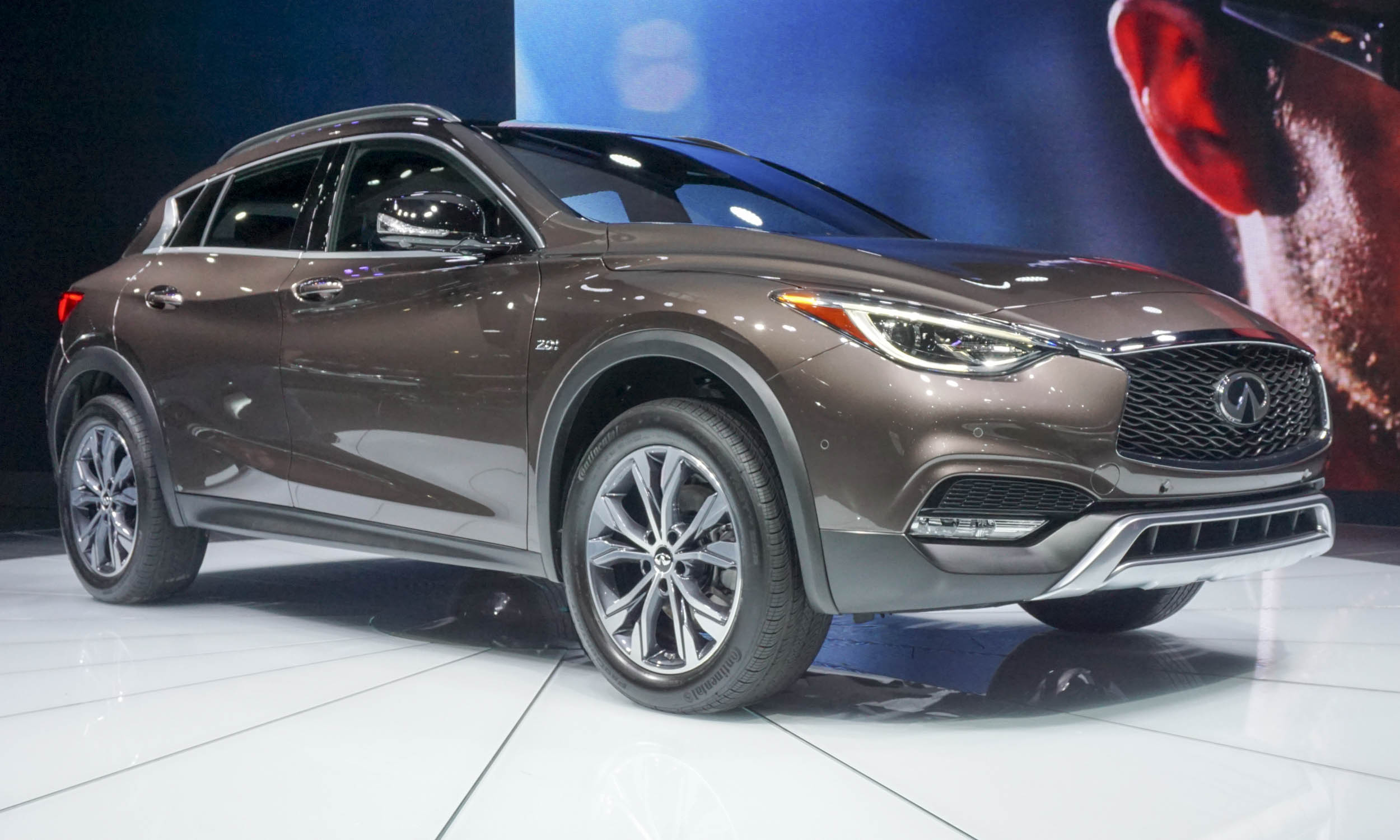 2017 Infiniti QX30
With a low roof and sleek lines, the QX30 will likely stand out in the very crowded premium crossover market. As expected, this newest Infiniti comes well equipped with the latest safety technology, including the around-view monitor as well as an auto-park system. The QX30 features an intelligent all-wheel-drive system that can send up to 50 percent of the engine’s power and torque to the rear axle when needed to maintain traction on slippery surfaces. Powering the QX30 is a 2.0-liter turbocharged 4-cylinder engine producing 208 horsepower, teamed with a 7-speed dual-clutch transmission. QX30 is expected to reach showrooms next summer. 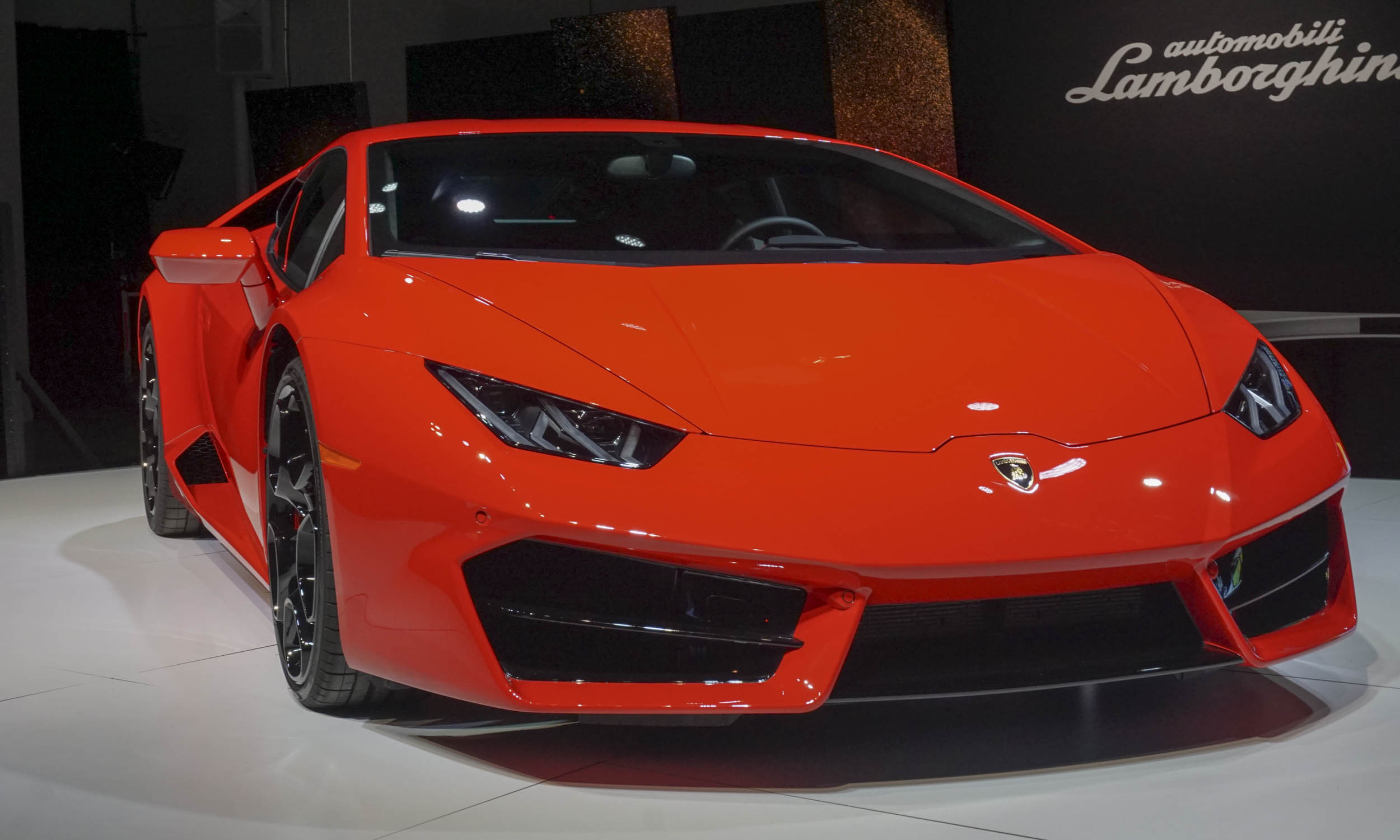 2016 Lamborghini Huracan LP 580-2
Last year Lamborghini introduced the all-new Huracan LP 610-4, which replaced the popular Gallardo. Since that introduction, the Huracan Spyder was revealed last month at the Frankfurt Motor Show, and here in Los Angeles Lamborghini took the wraps off the latest Huracan: the LP 580-2. For those unfamiliar with Lamborghini’s naming conventions, the “-2” indicates that this latest Huracan is 2-wheel drive. While it retains the same basic design as the original all-wheel drive version, this latest Huracan has been engineered specifically for its rear-wheel drive setup. The changes to the Huracán aren’t exclusively under the skin – the LP 580-2 gets fresh styling, differentiating it from its all-wheel drive sibling as well as providing aero improvements. 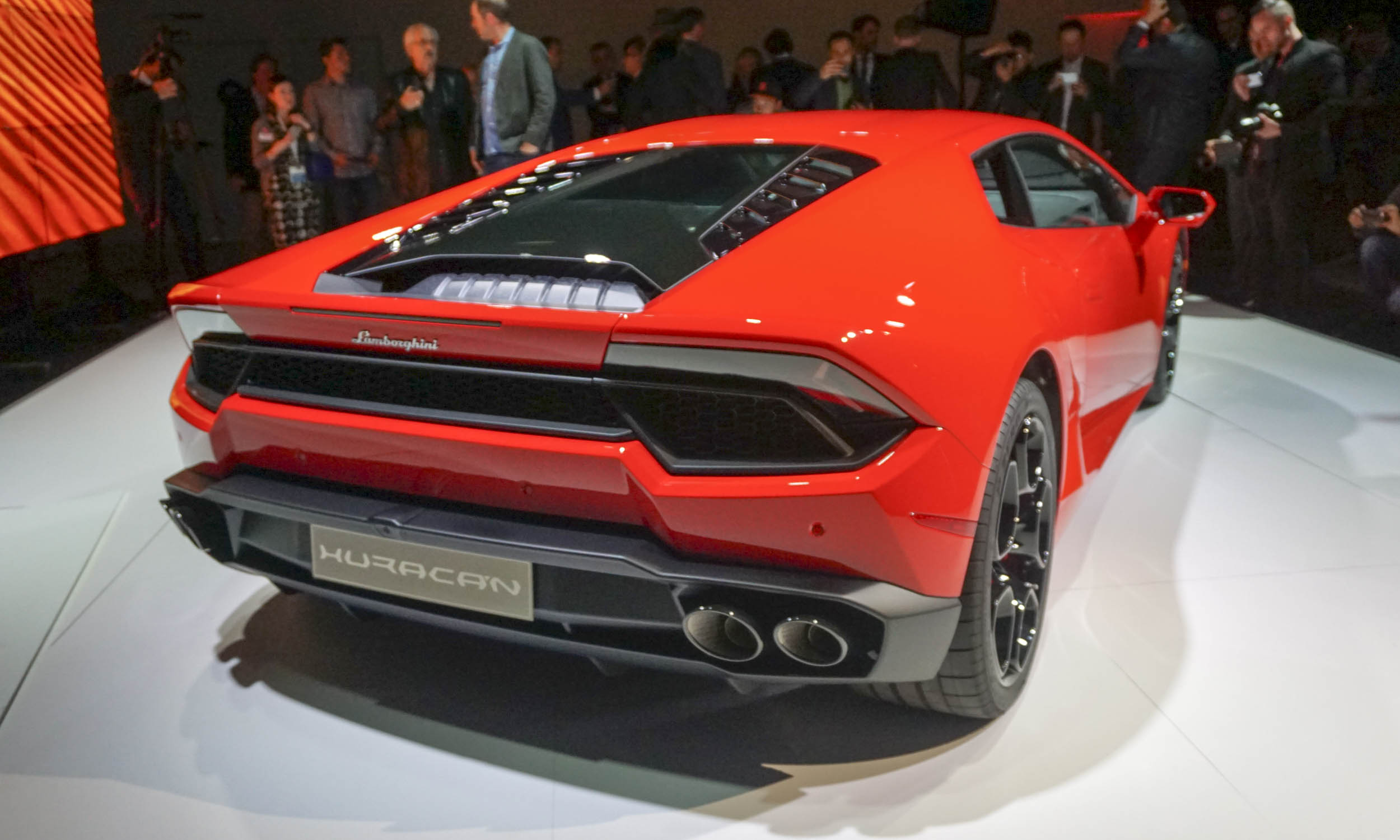 2016 Lamborghini Huracan LP 580-2
The Huracan’s normally-aspirated 5.2-liter V10 engine puts out 580 horsepower and almost 400 lb-ft of torque, with 300 lb-ft available at very low 1000 rpm. Although these performance numbers are lower than those of the all-wheel drive LP 610-4, the rear-drive Huracan drops 73 pounds so performance is not hindered in the slightest. In fact, the LP 580-2 can reach 62 mph in 3.4 seconds — a mere .2 seconds behind the LP 610-4. “The rear-wheel drive model fits perfectly into our Huracan family, appealing to those wanting an even more intense driving experience, or who currently drive other rear-wheel-drive marques and aspire to driving a Lamborghini,” said Stephan Winkelmann, president and CEO of Automobili Lamborghini. 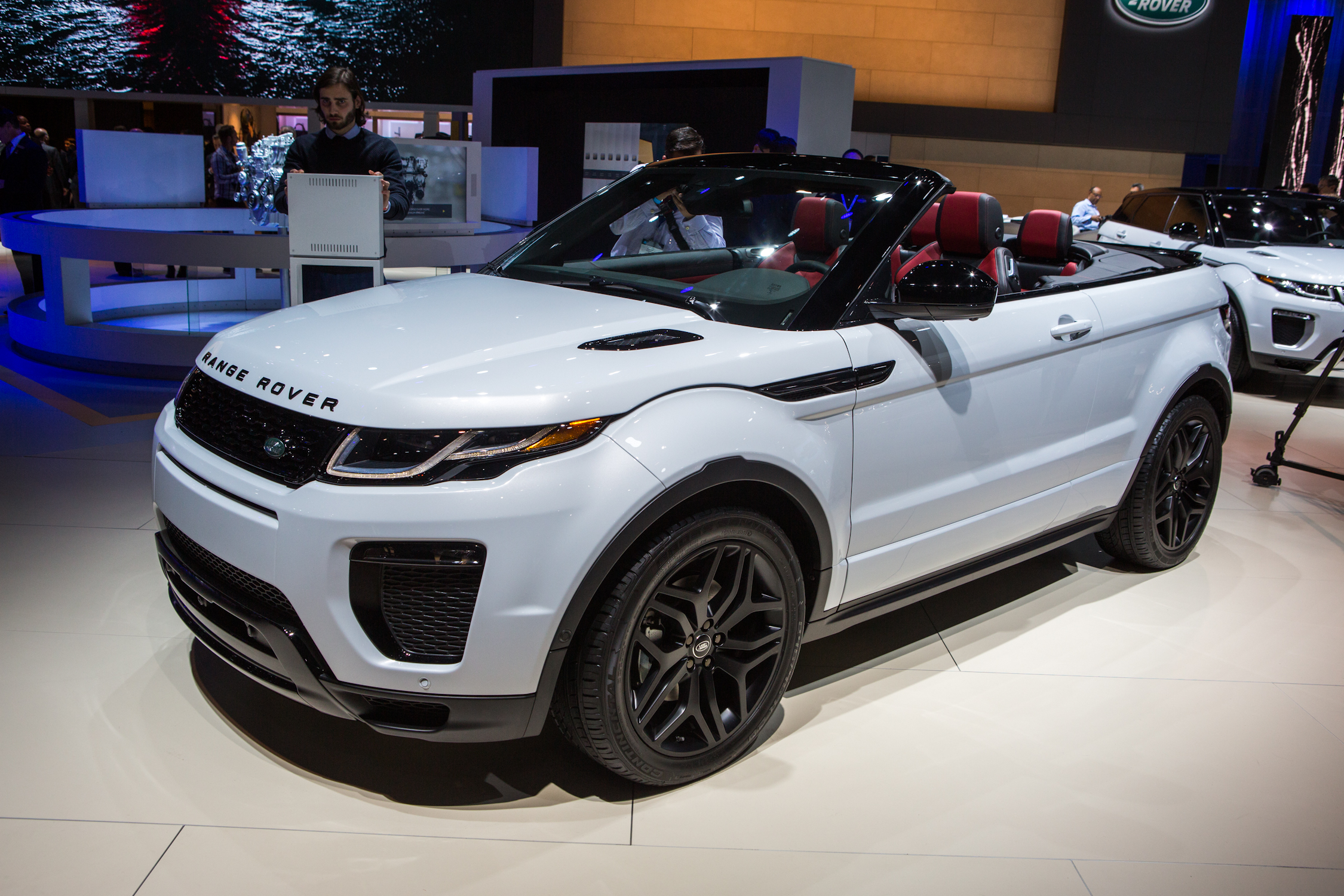 2017 Land Rover Range Rover Evoque Convertible
Yes, you read that correctly — a Range Rover convertible. Land Rover introduced this unique vehicle at this year’s Los Angeles Auto Show, and reaction seems to be mostly positive. The Evoque’s sleek profile remains intact when the top is up, and in 18 seconds the roof stows flush with the rear bodywork. The top can be raised at speeds up to 30 mph. The Z-fold fabric top includes a layer of acoustic insulation to create an interior environment on par with the hatchback. 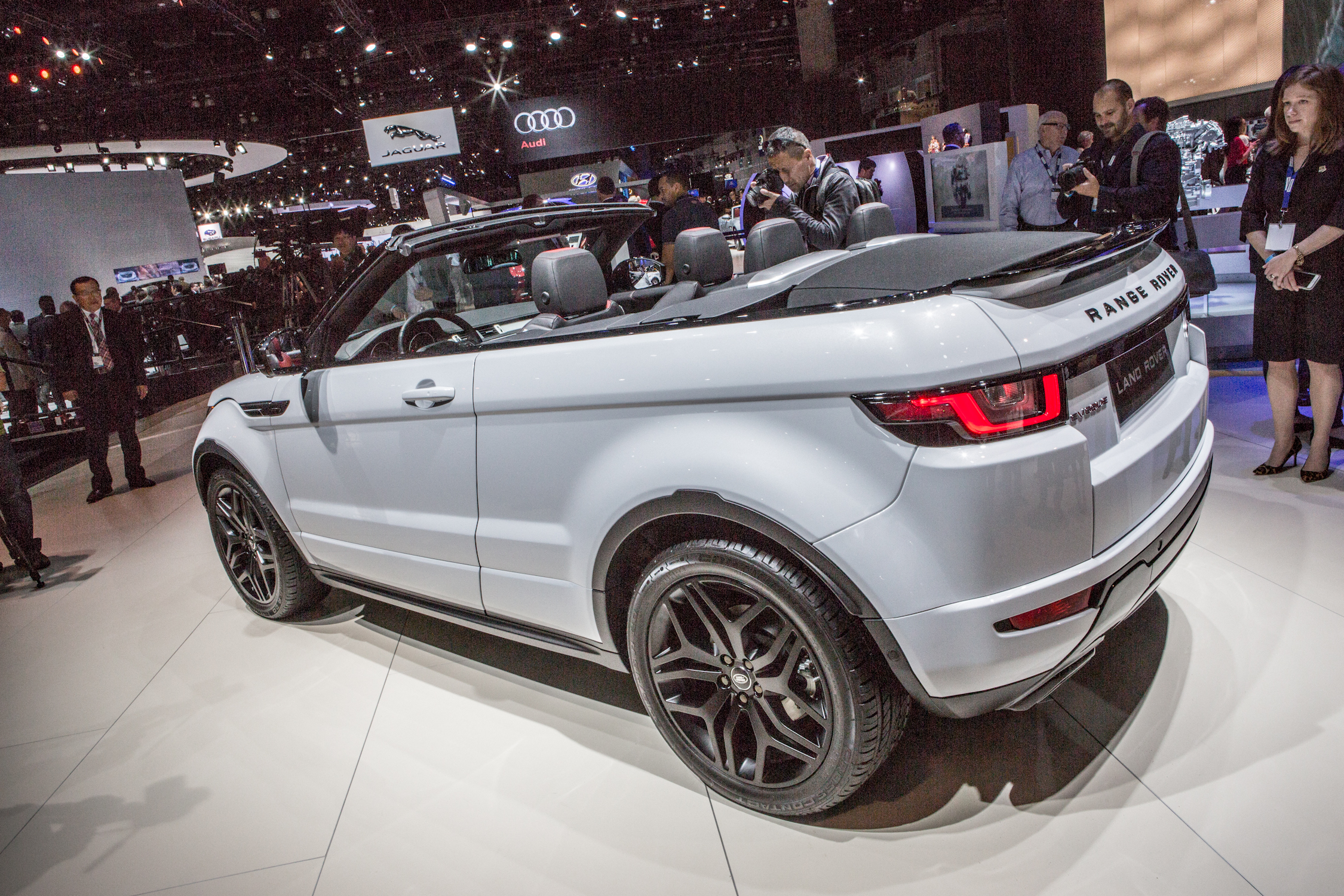 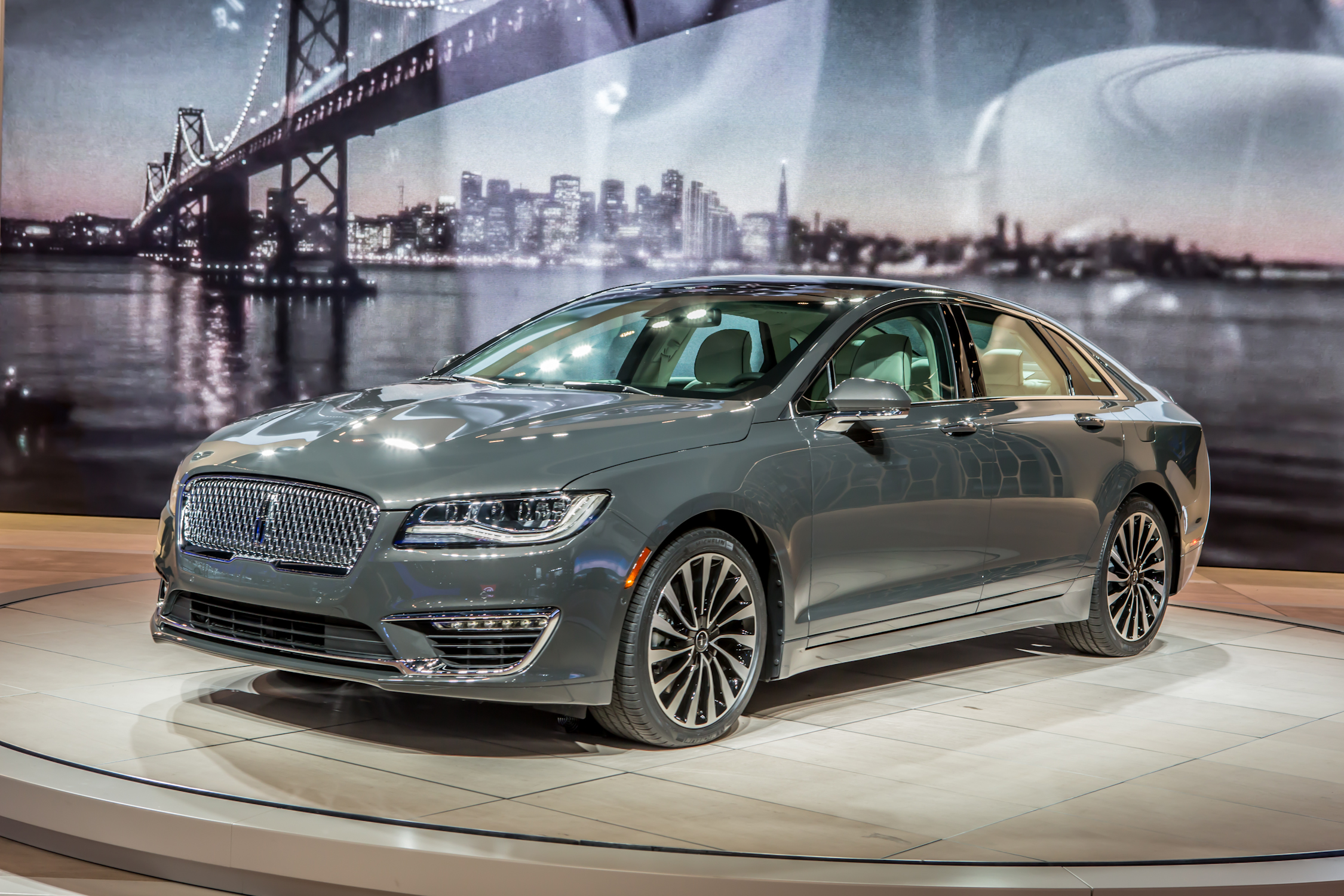 2017 Lincoln MKZ
The 2017 Lincoln MKZ premiered at this year’s Los Angeles Auto Show with fresh styling and exciting powertrain updates. Most noticeable is a new front-end treatment, with a grille similar to the one on the Lincoln Continental concept flanked by adaptive LED headlights. Inside, the controls have been updated for easier access to the most common buttons and USB ports. A new Active Noise Control system quiets the cabin and contributes to an overall Lincoln design aesthetic of “quiet luxury.” 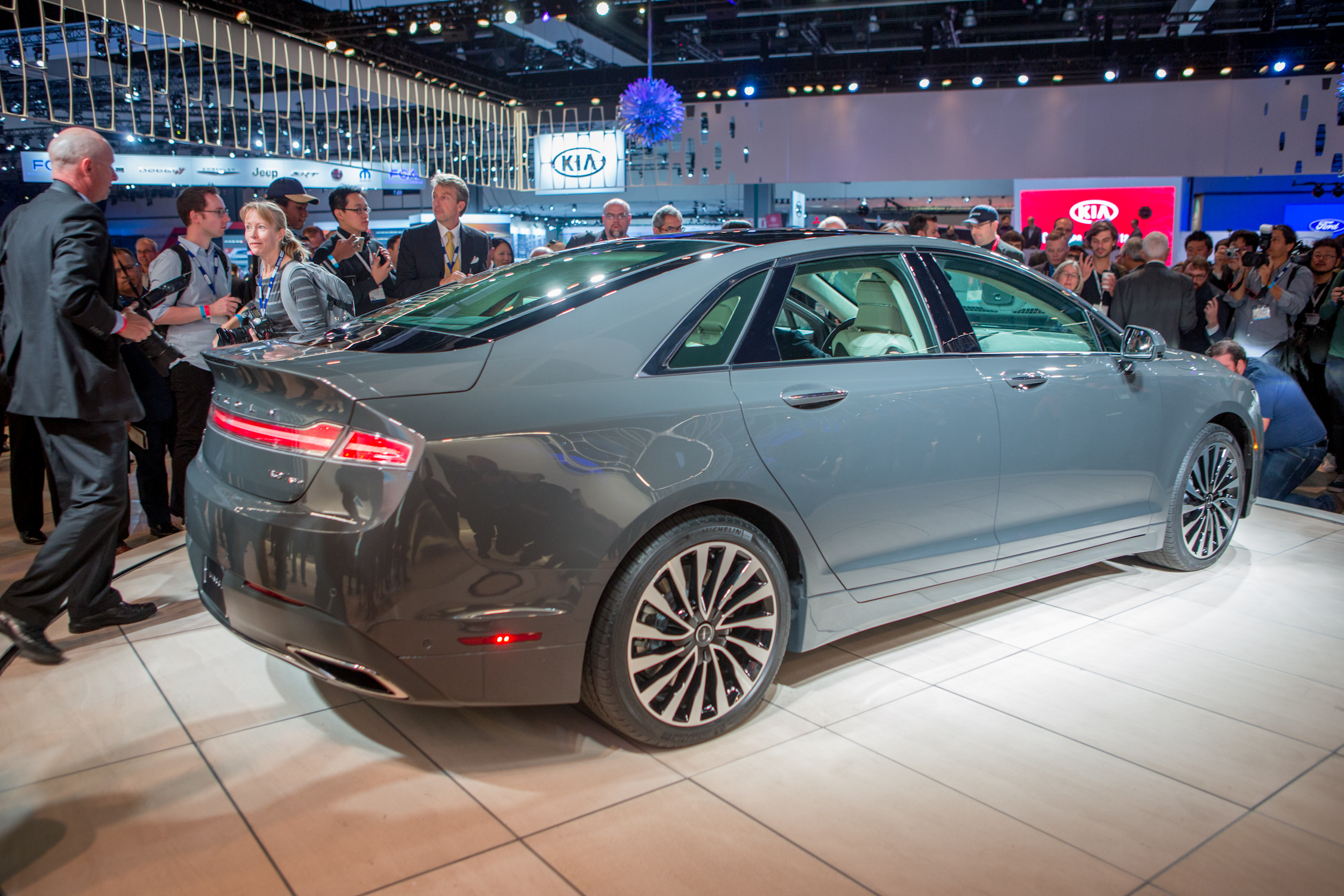 2017 Lincoln MKZ
The new MKZ gets a major power boost from an available 3.0-liter twin-turbo V6 engine that produces 400 horsepower and 400 lb-ft of torque when paired with Lincoln’s intelligent all-wheel-drive system —front-drive trims have an output of 350 horsepower. Dynamic Torque Vectoring is part of an available Driver’s Package for MKZ that enhances cornering agility. Other powertrains will be available, including a hybrid system. 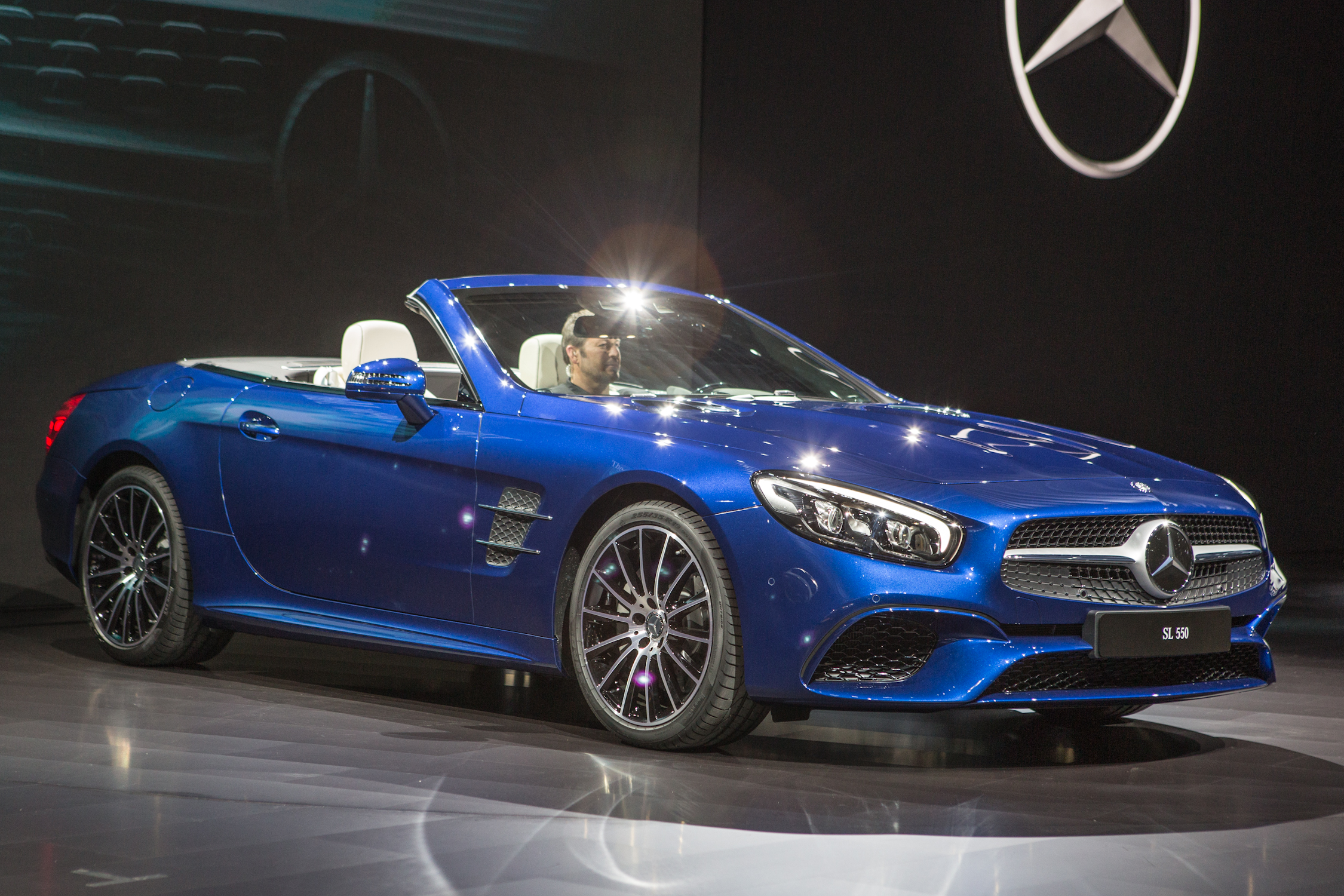 2017 Mercedes-Benz SL
Mercedes-Benz took the wraps off a new SL-Class at the Los Angeles show. This ultra-luxurious convertible gets fresh styling, cool high-tech features and more power. The SL is one of the most extravagant convertibles on the market, and this new one looks to enhance its exalted position. The most noticeable change to the SL: revised front end styling, with headlights that are no longer flush with the grille, giving the SL a wider stance. The grille itself is more pronounced with different treatments depending on trim level. Dual power domes accentuate the long hood. 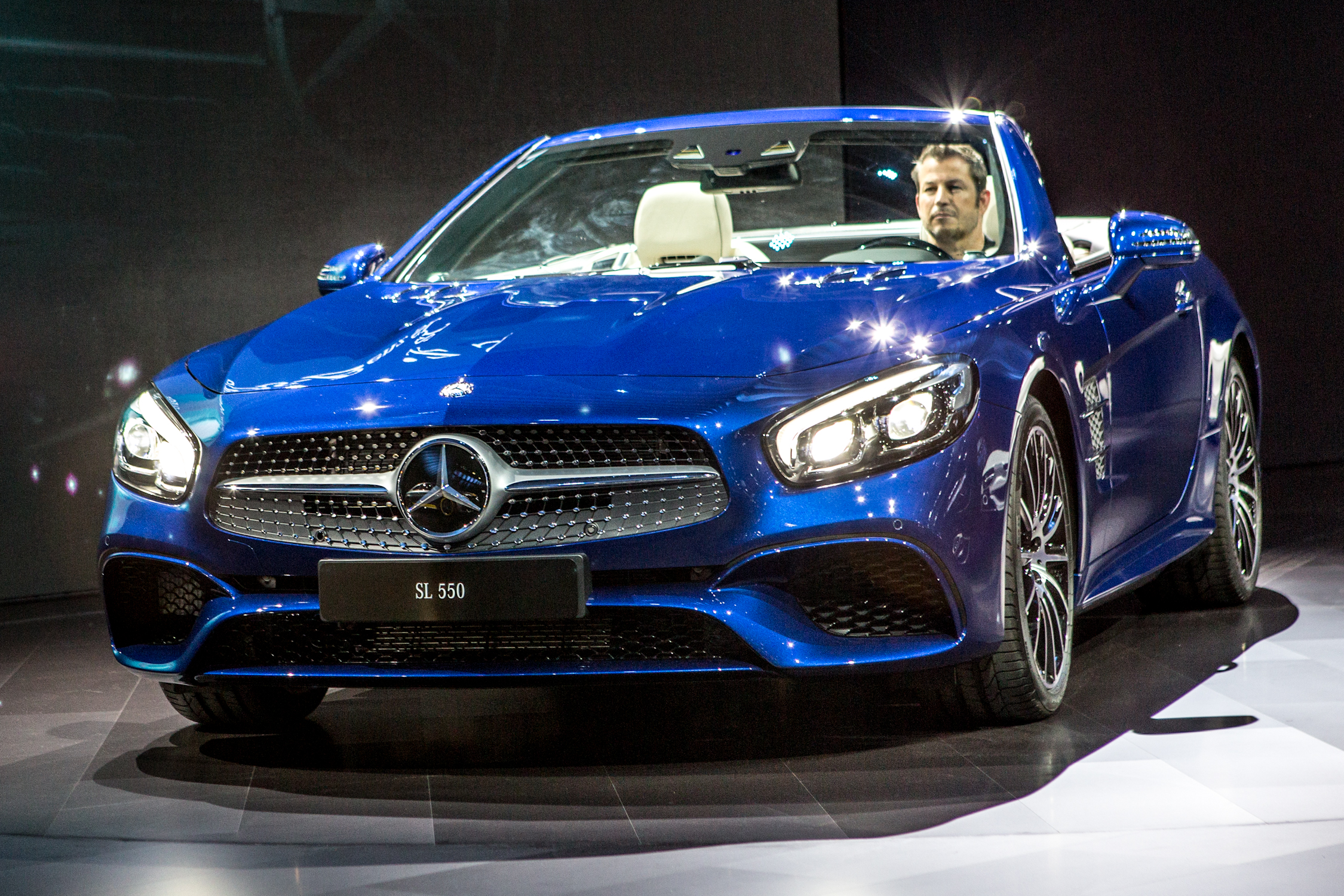 2017 Mercedes-Benz SL
The biggest change in power originates at the base of the SL lineup. The SL450 replaces the SL400 and gets a major power boost from its 3.0-liter V6 engine that now puts out 362 horsepower. That’s a jump of more than 30 horsepower, and good enough to get this entry-level SL to 60 mph in under five seconds. Power remains the same in the SL550 as well as the two AMG models, but there’s no shame in that. The SL550 gets its power from a 449-horsepower V8, while the AMG SL63 bumps up to the Biturbo V8 putting out 577 horsepower. For the ultimate in performance, the AMG SL65 gets 621 horsepower and 738 lb-ft of torque from its Biturbo V12 engine. That power will move the SL to 60 mph in less than four seconds, with a top speed of 186 mph. 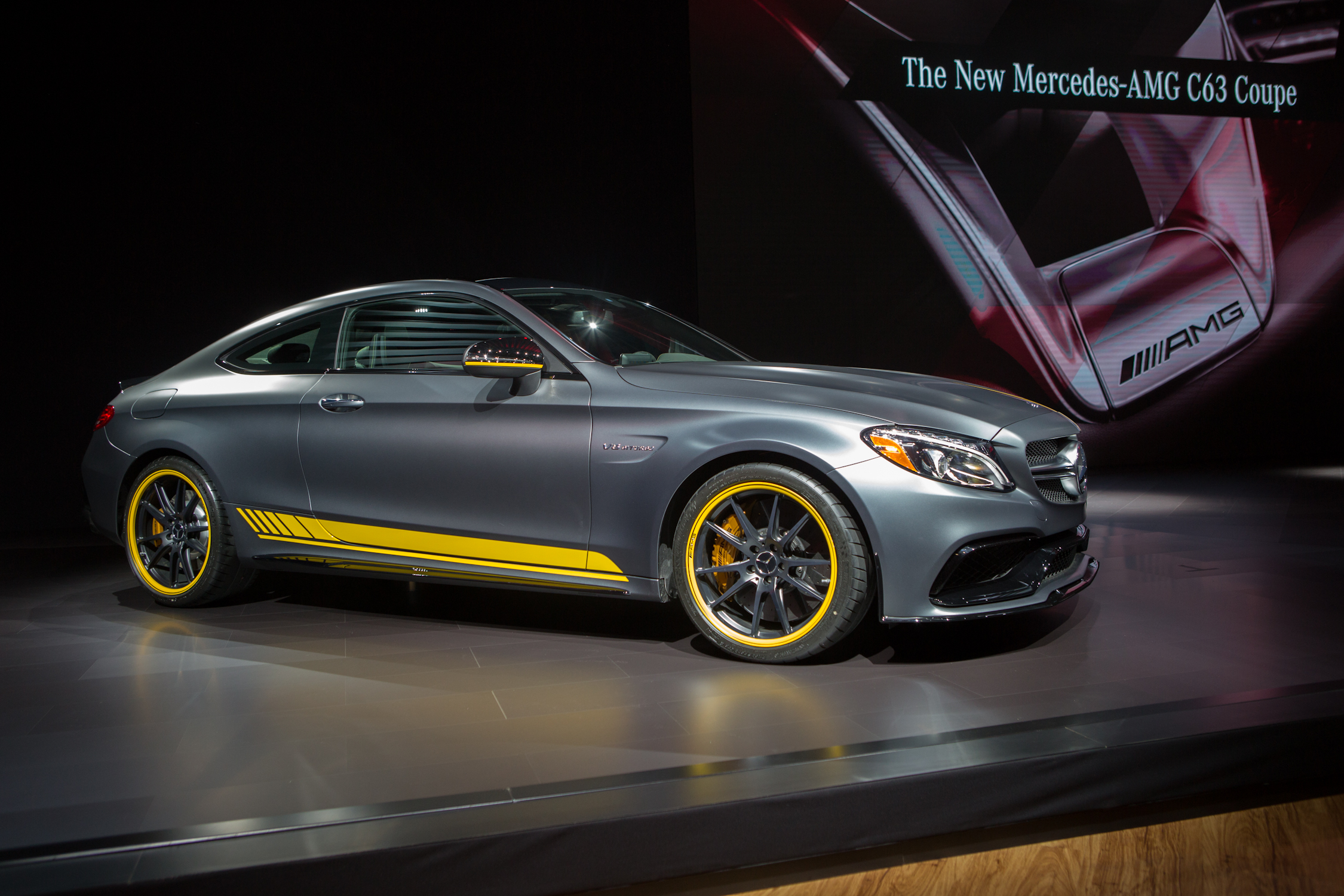 2017 Mercedes-AMG C63 Coupe
The German automaker had a second new vehicle to reveal in L.A. — clearly underpinning how important the Southern California market is to the brand — the all-new 2017 Mercedes-AMG C63 Coupe. While the C63 Coupe on display at the Mercedes stand clearly stood out from the crowd, even a “plain” C63 is easily noticed with its wide track, larger wheels and flared wheel arches. “The new AMG C63 Coupe embodies our conception of progress: It offers impressive longitudinal and lateral dynamics at an extremely high level along with improved fuel economy,” said Tobias Moers, chairman of the board of management of Mercedes-AMG GmbH. 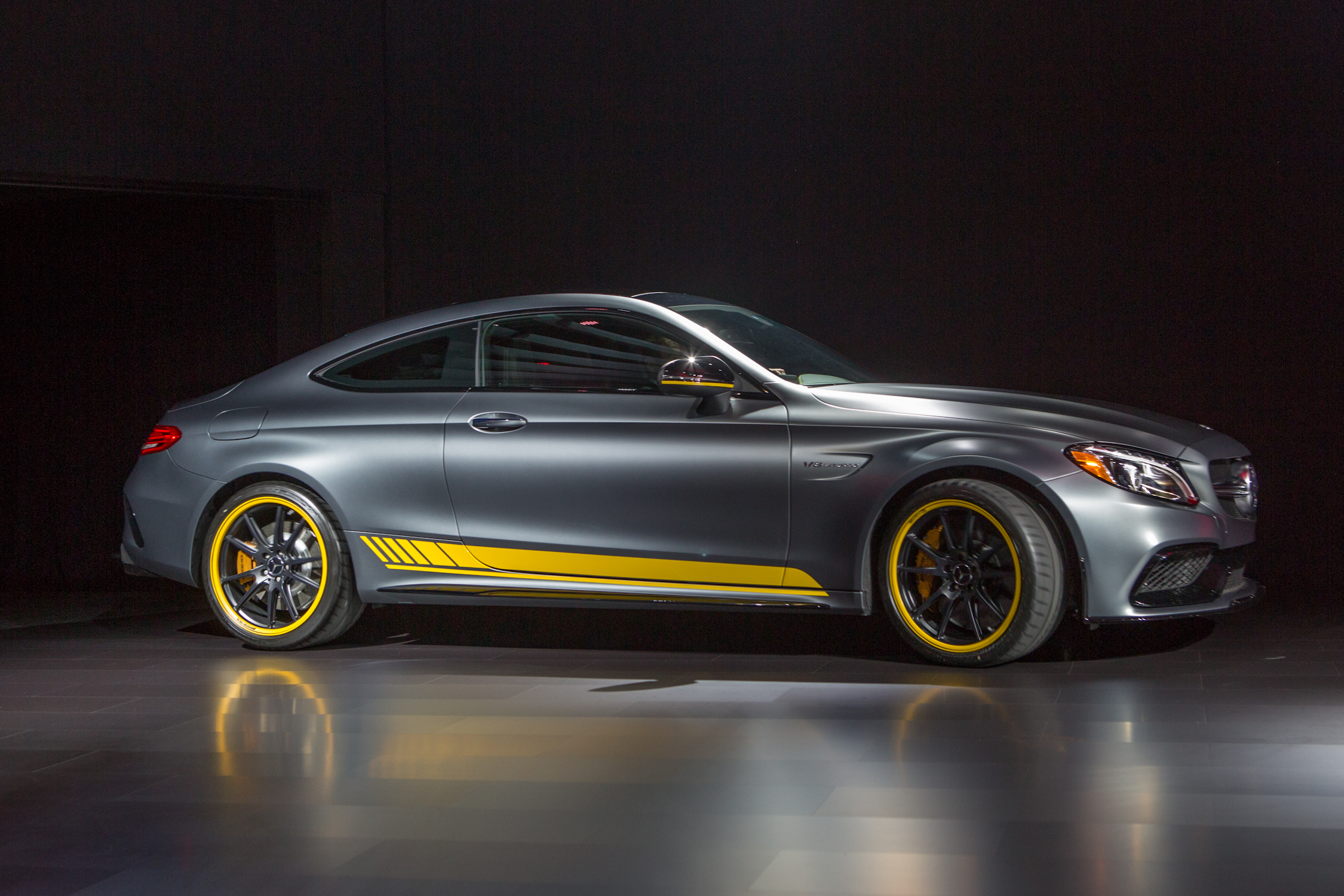 2017 Mercedes-AMG C63 Coupe
As with any AMG-tuned vehicle, it’s what’s under the hood that really makes the car shine. The C63 is no exception — power comes from a Biturbo 4.0-liter V8 engine putting out 469 horsepower, teamed with the AMG Speedshift 7-speed transmission. The C63 S gets a bit more power — 503 horses to be exact. Either version will hit 60 mph in less than four seconds. The C63 Coupe, along with the standard C-Class Coupe, will go on sale next summer. 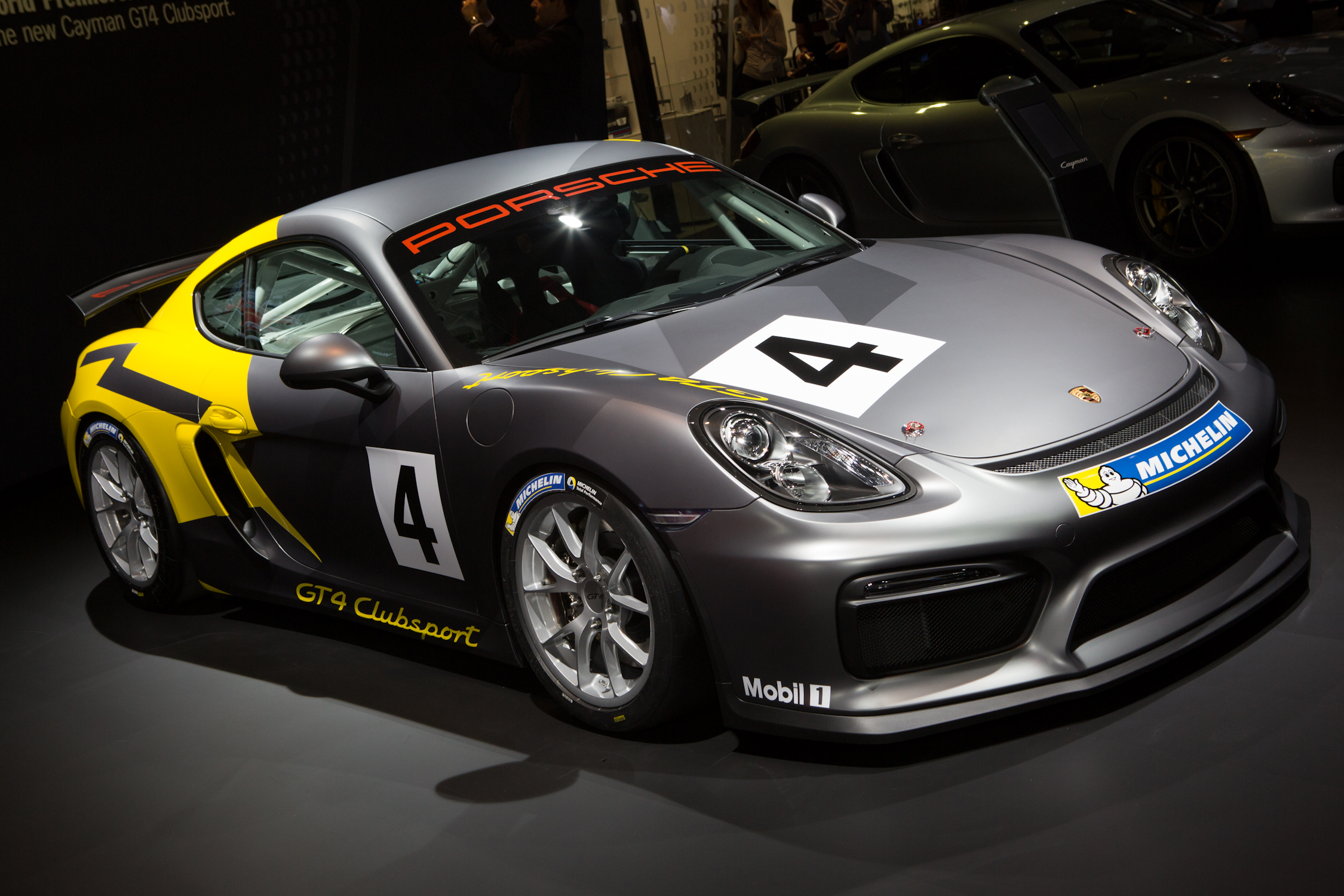 Porsche Cayman GT4 Clubsport
There ae plenty of new Porsches on display at the L.A. show, but the featured car is not one you can drive home from the showroom — it’s only for the track. Based on the Cayman GT4 street car, the Cayman GT4 Clubsport is Porsche’s newest offering for amateur and club racing. The Clubsport is powered by a 3.8-liter flat-six engine that puts out 385 horsepower. This racing version features a modified 6-speed Porsche double clutch PDK transmission and a mechanical rear-axle locking differential specifically for racing. 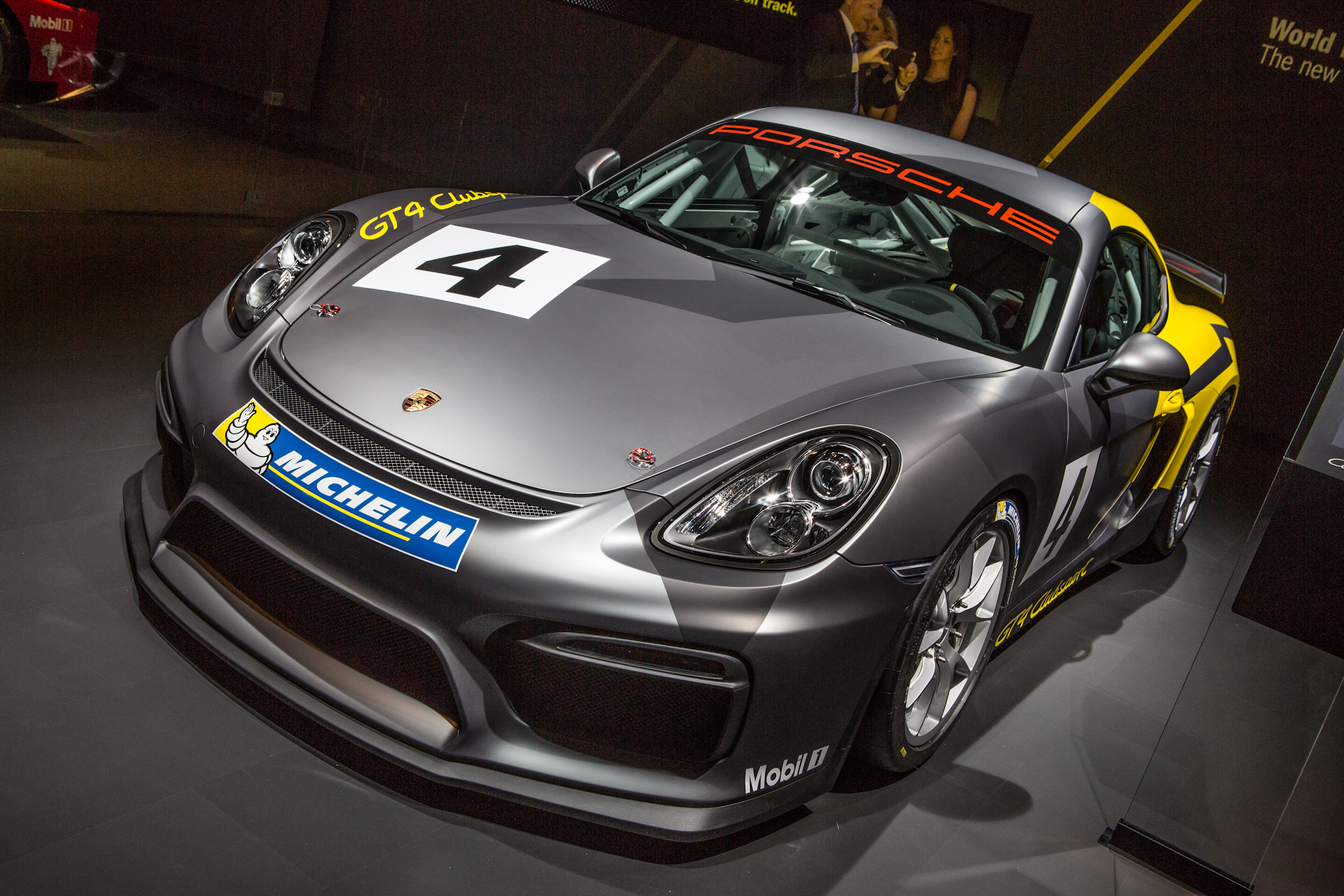