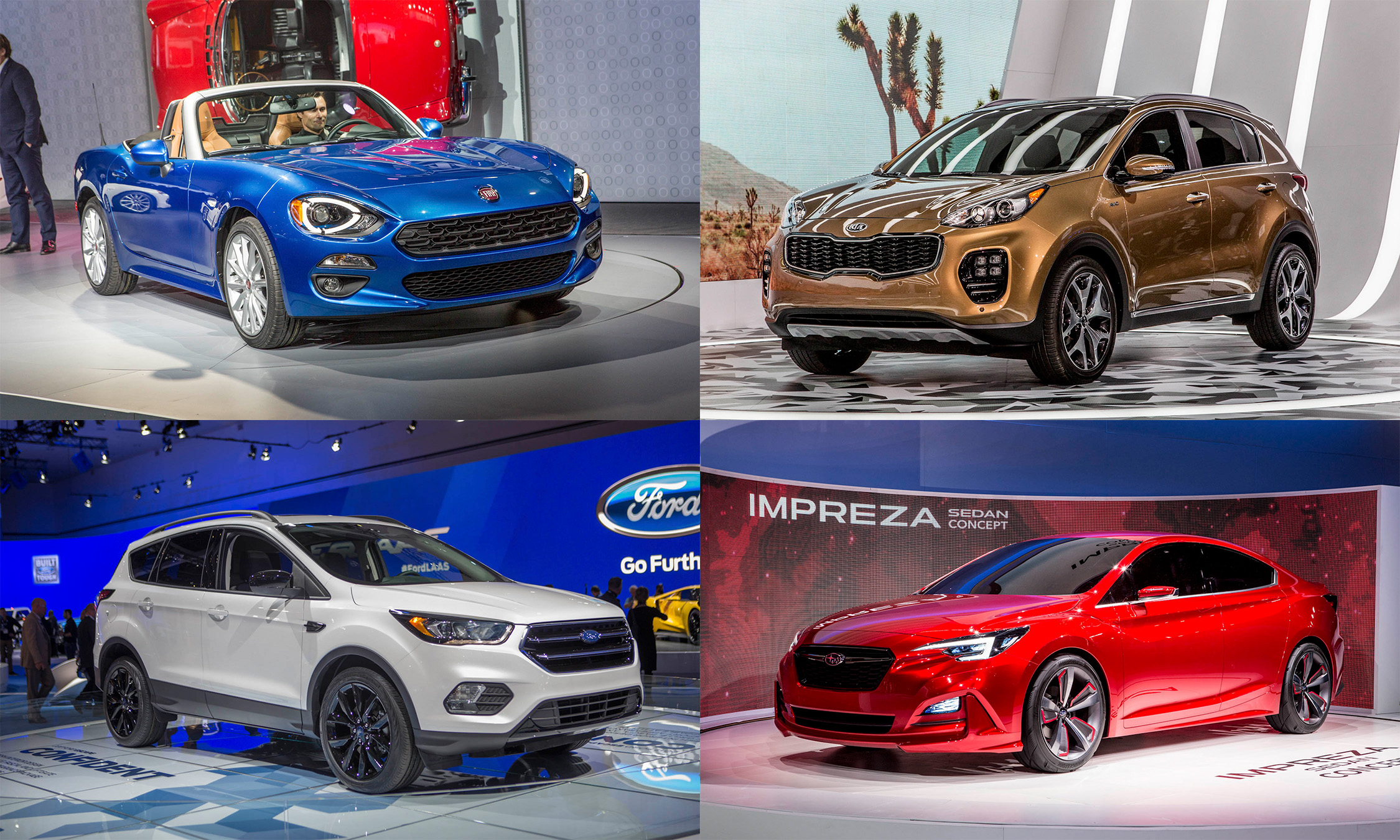 Heart of the Market
The Los Angeles Auto Show is one of the largest U.S. auto shows of the year — situated at the heart of the all-important Southern California market — making it a favorite venue for automakers to debut important new cars. From practical compacts to SUVs and convertibles, this year’s L.A. show hosted some major new-vehicle introductions, so let’s look at the latest players you’ll be able to find (relatively) soon at your local dealer. 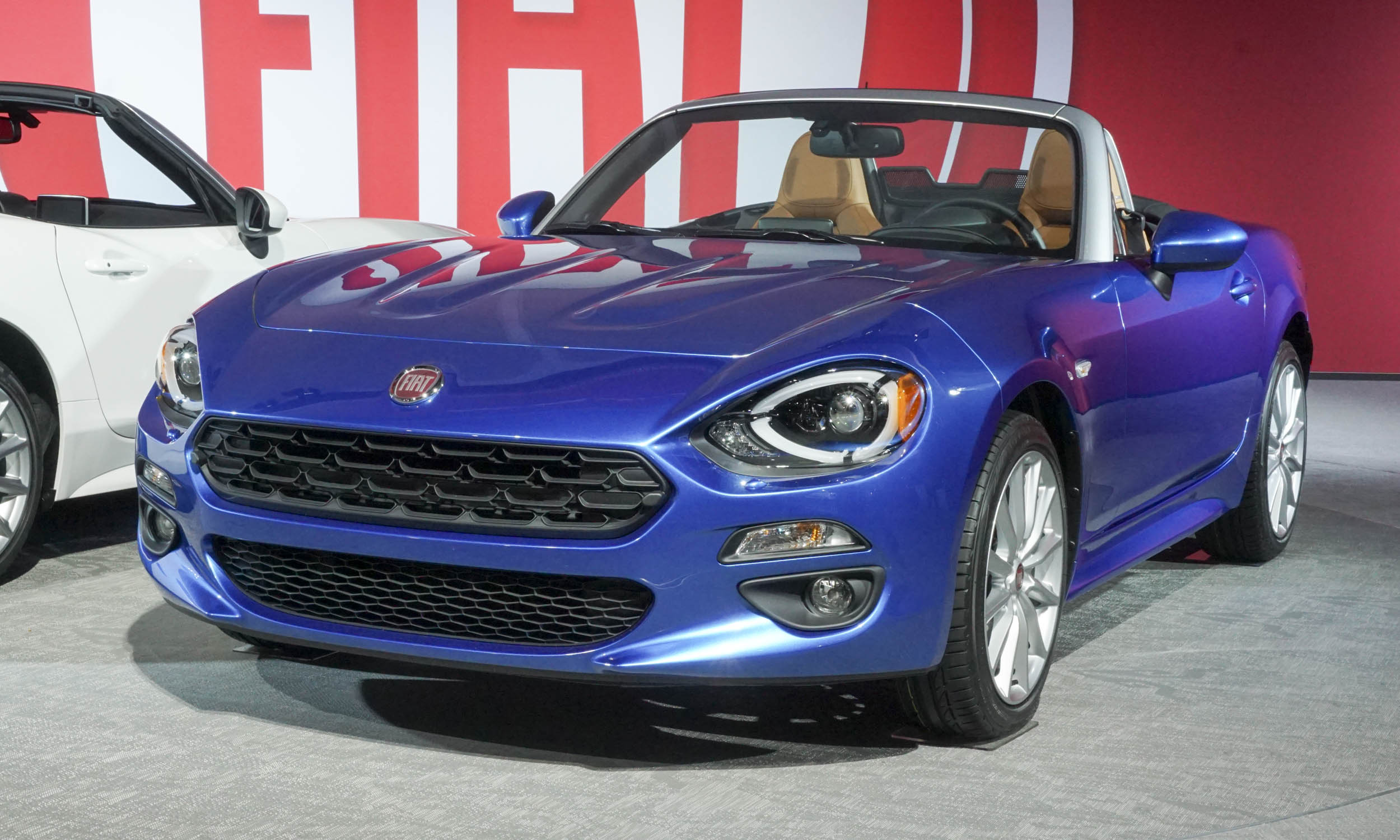 2017 Fiat 124 Spider
One of the highlights of this year’s L.A. show was the debut of the 2017 Fiat 124 Spider, marking the return of the Italian roadster nearly 50 years after the introduction of the original model to the U.S. market. Based on the same platform as the Mazda MX-5 Miata, the front-engine, rear-wheel-drive 124 Spider gets powered by Fiat’s 1.4-liter MultiAir Turbo 4-cylinder engine that produces 160 horsepower and 184 lb-ft of torque, combined with either a 6-speed manual transmission or a 6-speed automatic. 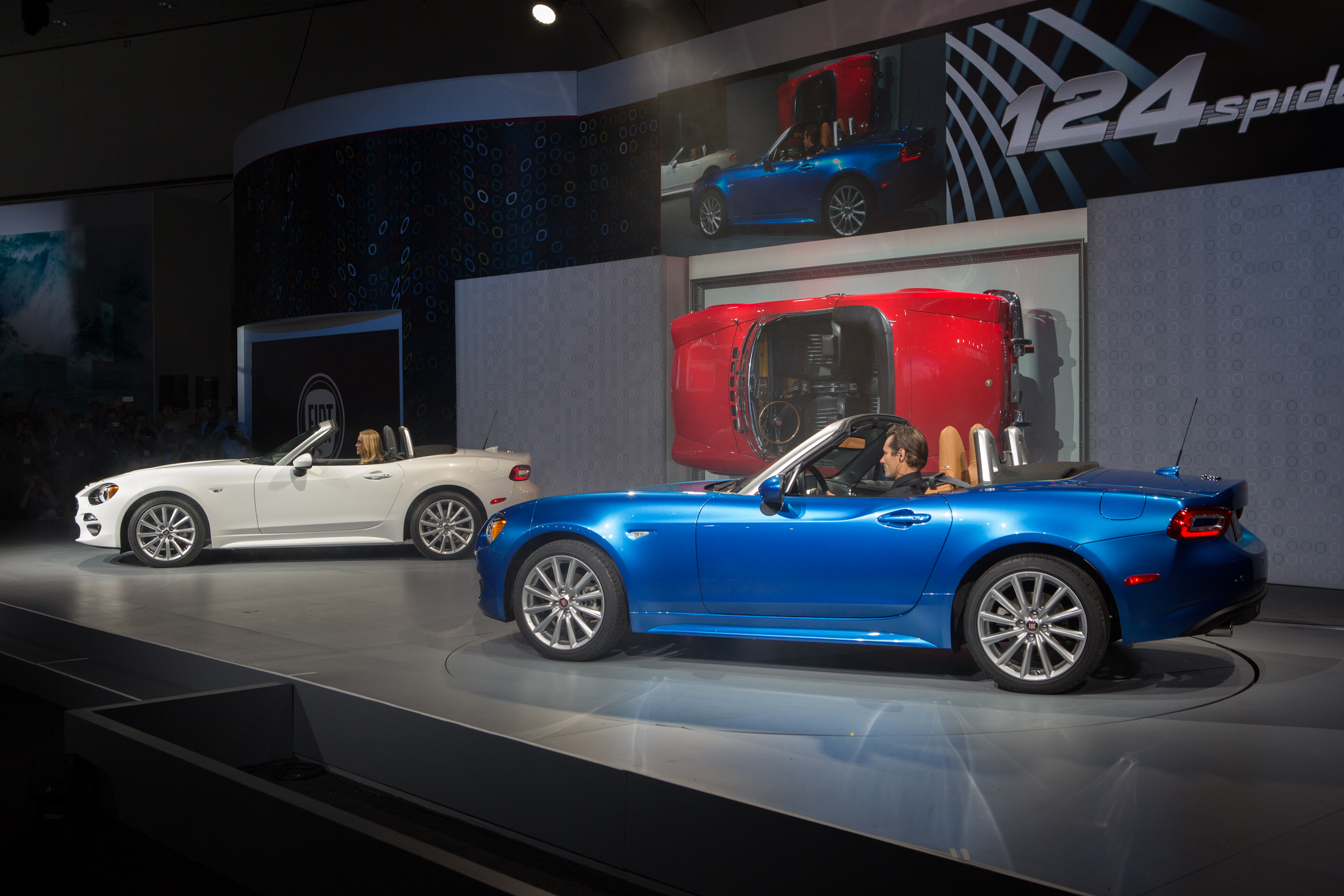 2017 Fiat 124 Spider
The new Fiat 124 Spider was designed at Centro Stile in Turin, Italy, and takes styling cues from the original 124 Spider, including the hexagonal upper grille, power domes on the hood and sharp horizontal taillights. The double-wishbone front suspension, multi-link rear suspension and steering are all tuned for a dynamic driving experience. The soft-top can be manually operated from the driver’s seat and stows behind the seats without a tonneau cover. The 2017 Fiat 124 Spider is available in Classica and Lusso trim levels, and the first 124 vehicles will be offered as the limited-edition Prima Edizione Lusso as shown in Los Angeles, finished in Azzurro Italia blue paint with saddle premium leather seats. The 2017 Fiat 124 Spider goes on sale in summer 2016. 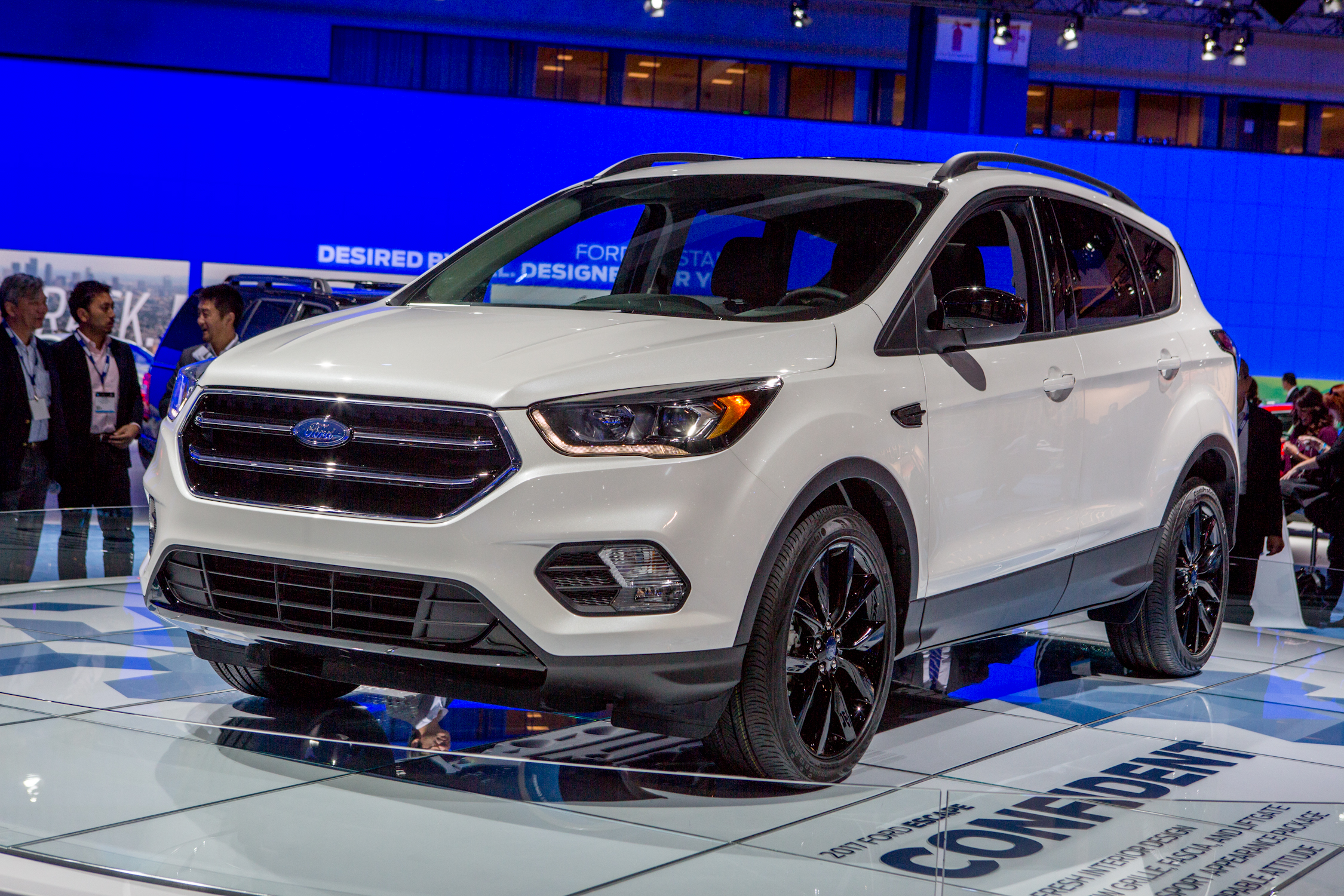 2017 Ford Escape
Ford’s compact Escape crossover SUV is one of the top-selling SUVs on the market, and the redesigned 2017 model debuted in L.A. with a new exterior look, new interior, new engines and more driver-assistance technology. The updated exterior features a raised trapezoidal grille with horizontal bars to tie the Escape more closely to other Ford SUVs. Inside, a redesigned center console has the shifter repositioned to create a storage bin at the base of the center stack, and includes new cupholders and a pushbutton parking brake. The 2017 Escape will be the first vehicle to offer available SYNC Connect; drivers can use a smartphone app to remotely lock, unlock, locate and even start the vehicle. Available driver-assist technology includes enhanced active park assist, lane-keeping system, adaptive cruise control and forward collision warning with brake support. 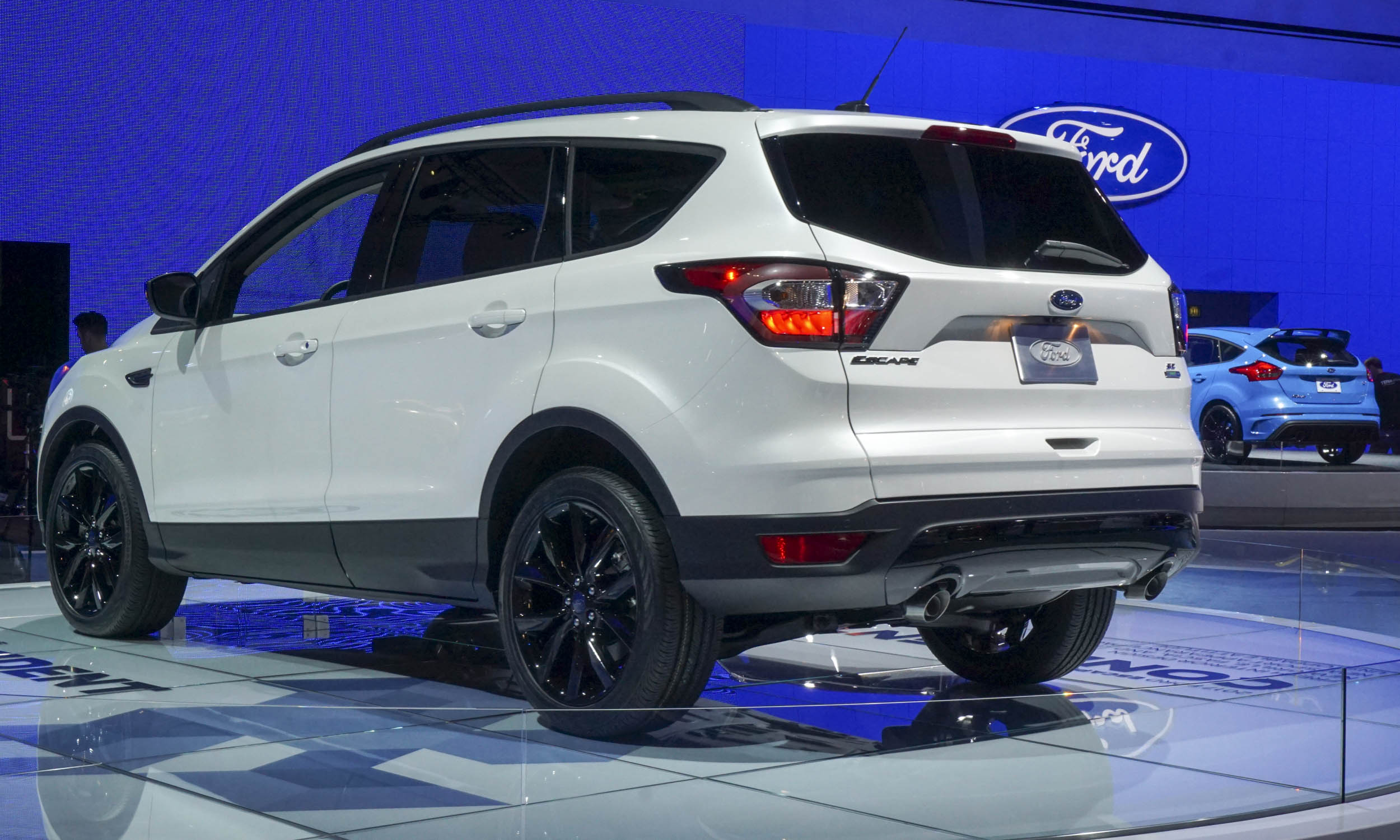 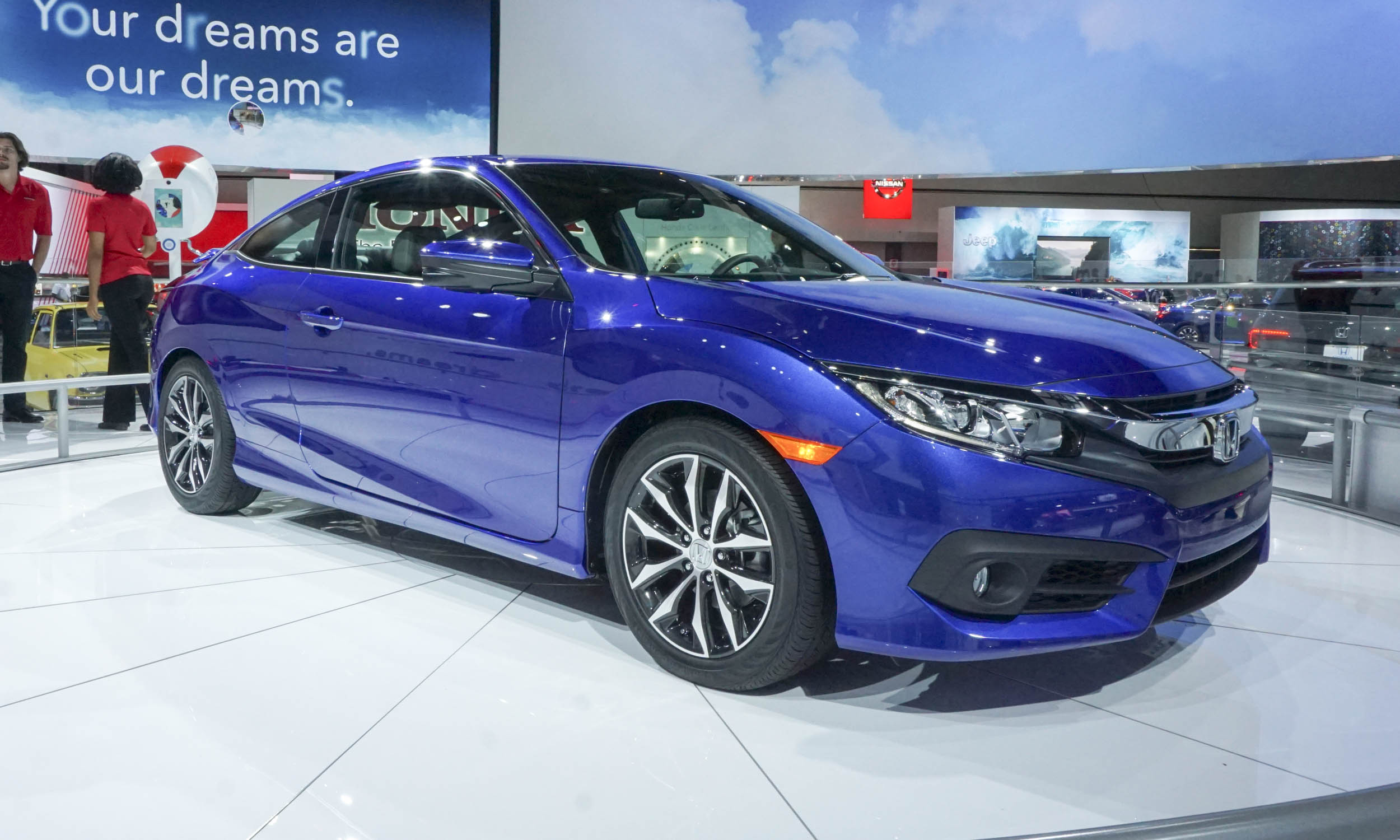 2016 Honda Civic Coupe
The redesigned 2016 Honda Civic Sedan is now on sale and the second addition to the Civic lineup, the 2016 Civic Coupe, made its debut in Los Angeles. The new Civic Coupe offers a sportier take on the new Civic design with a more steeply raked roof, a shorter rear overhang and 5.5-inch shorter overall length than the Civic Sedan, while also having a longer wheelbase and a wider stance than the previous Civic. At the rear, the Civic Coupe has an exclusive taillight design that takes the distinctive C-shaped LED taillights from the Sedan and connects them across the rear decklid. 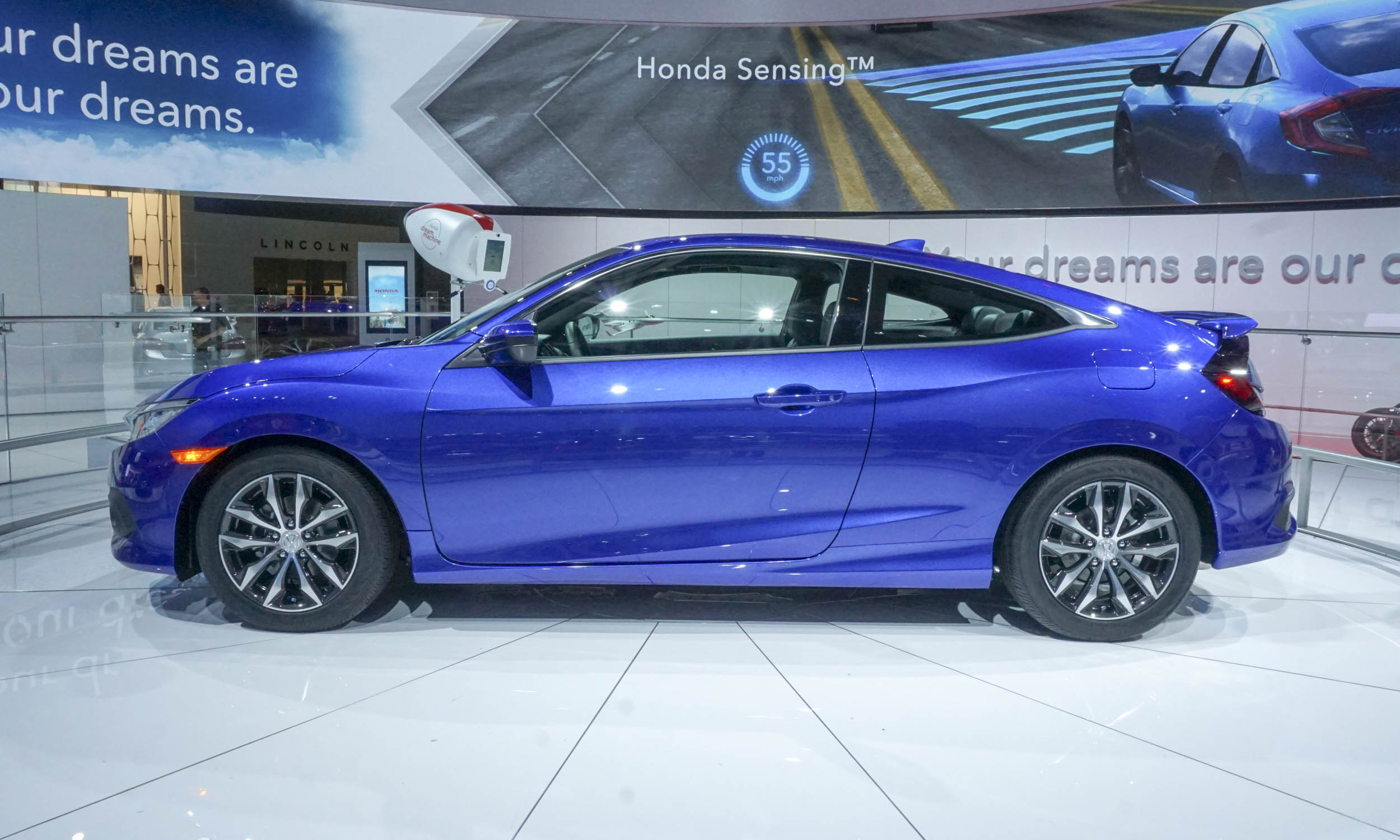 2016 Honda Civic Coupe
The new Civic Coupe delivers more interior volume and 5 inches of more rear-seat legroom than the previous model. Two powerful fuel-efficient engines will be offered, with lower trim levels motivated by a 2.0-liter engine that produces 158 horsepower and 138 lb-ft of torque combined with either a 6-speed manual transmission or a CVT automatic. Higher trim levels will be powered by the first-ever turbocharged engine for Civic Coupe: a 1.5-liter direct-injection turbo that produces 174 horsepower and 162 lb-ft of torque. Available new features include LED headlights, remote start, heated front seats and a full-color TFT center meter. The 2016 Civic Coupe is scheduled to go on sale in March 2016. 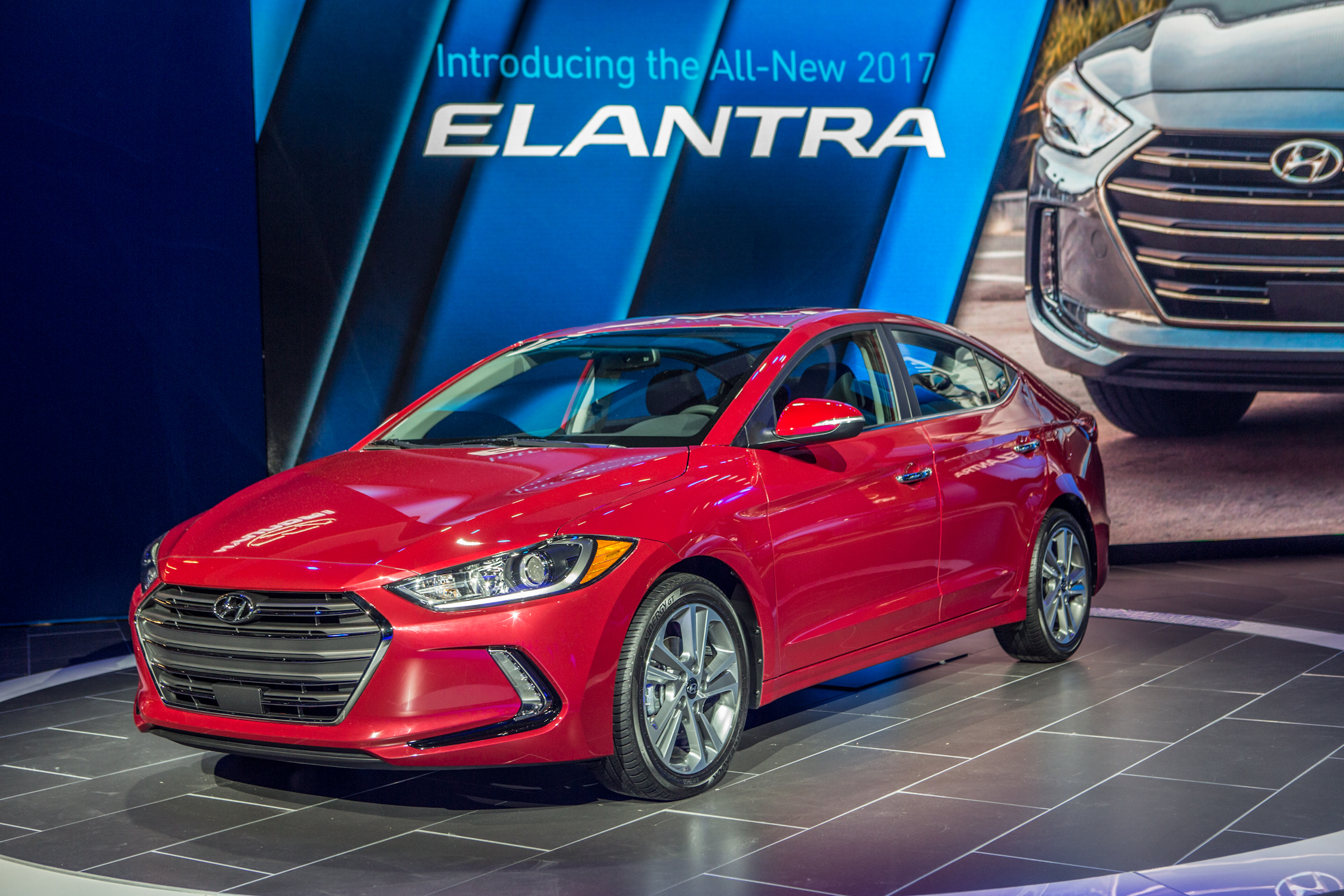 2017 Hyundai Elantra
Hyundai debuted the 2017 Elantra compact sedan in the City of Angels — the sixth generation of one of the Korean automaker’s best-selling models. The new design features a signature hexagonal grille that ties the Elantra closely to the current Sonata design and includes available HID headlights with Dynamic Bending lights, as well as vertical LED daytime running lights. Inside, the new interior design incorporates soft-touch materials and high-tech details with a wide instrument panel. 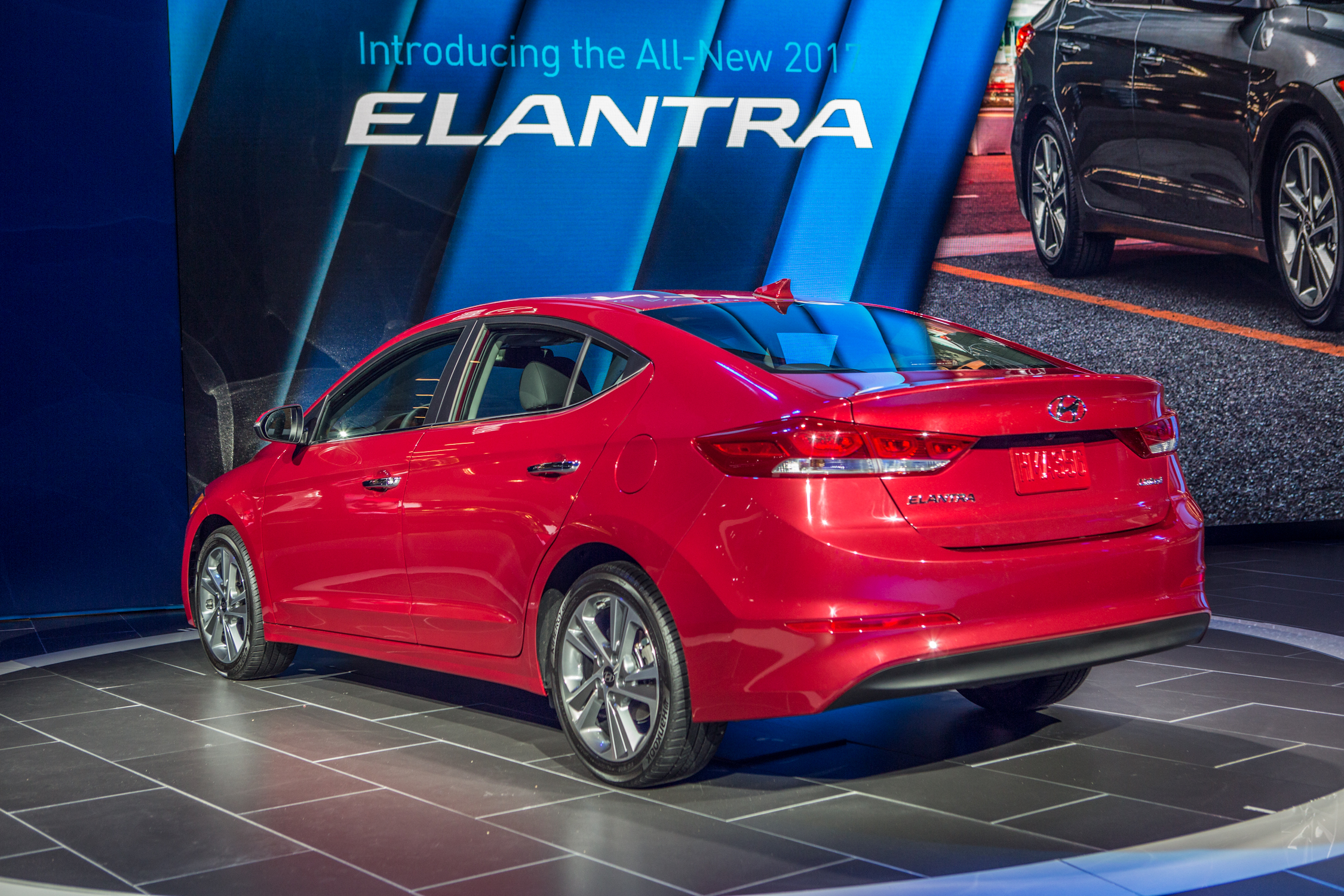 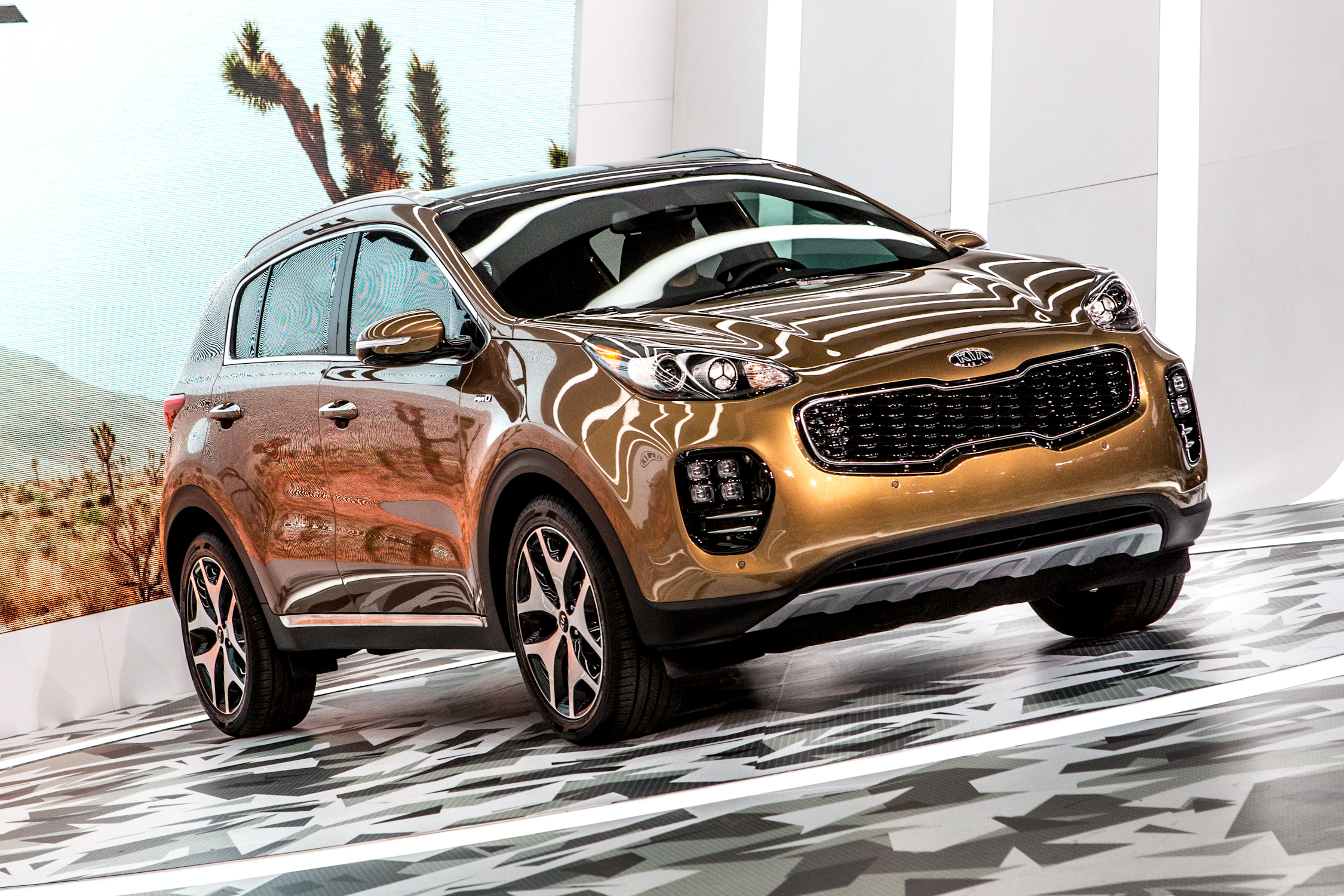 2017 Kia Sportage
The 2017 Kia Sportage made its North American debut at the Los Angeles Auto Show with a new design, stiffer structure for improved driving dynamics, driver assistance systems and new technology. Every panel of the exterior is new, but the biggest change to the new front end design with the signature Kia tiger-nose grille and the headlights positioned higher and flowing back into the front fenders. The new Sportage is the same width, but the wheelbase has increased 1.2 inches and the overall length has increased by 1.6 inches, improving both passenger room and cargo volume. 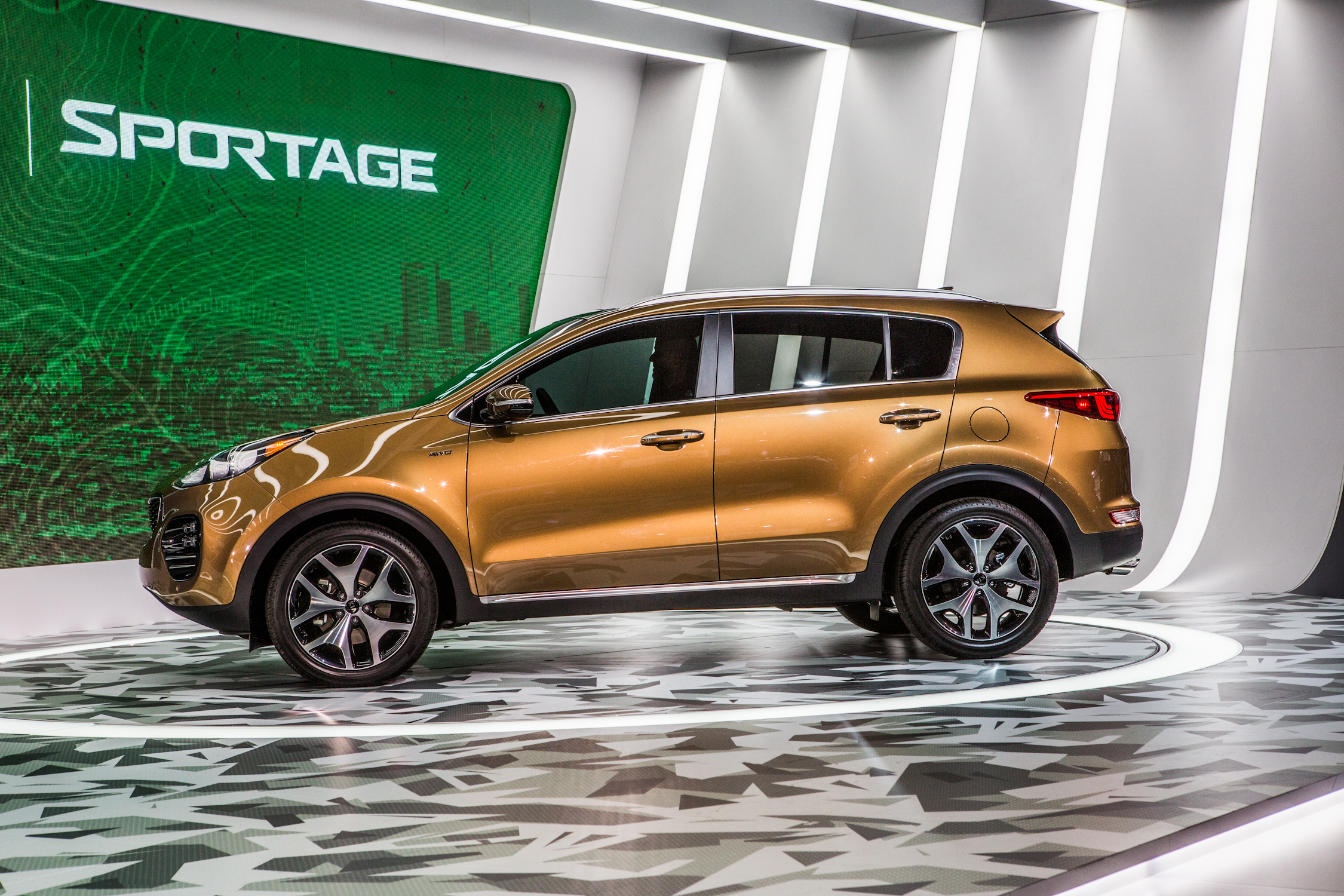 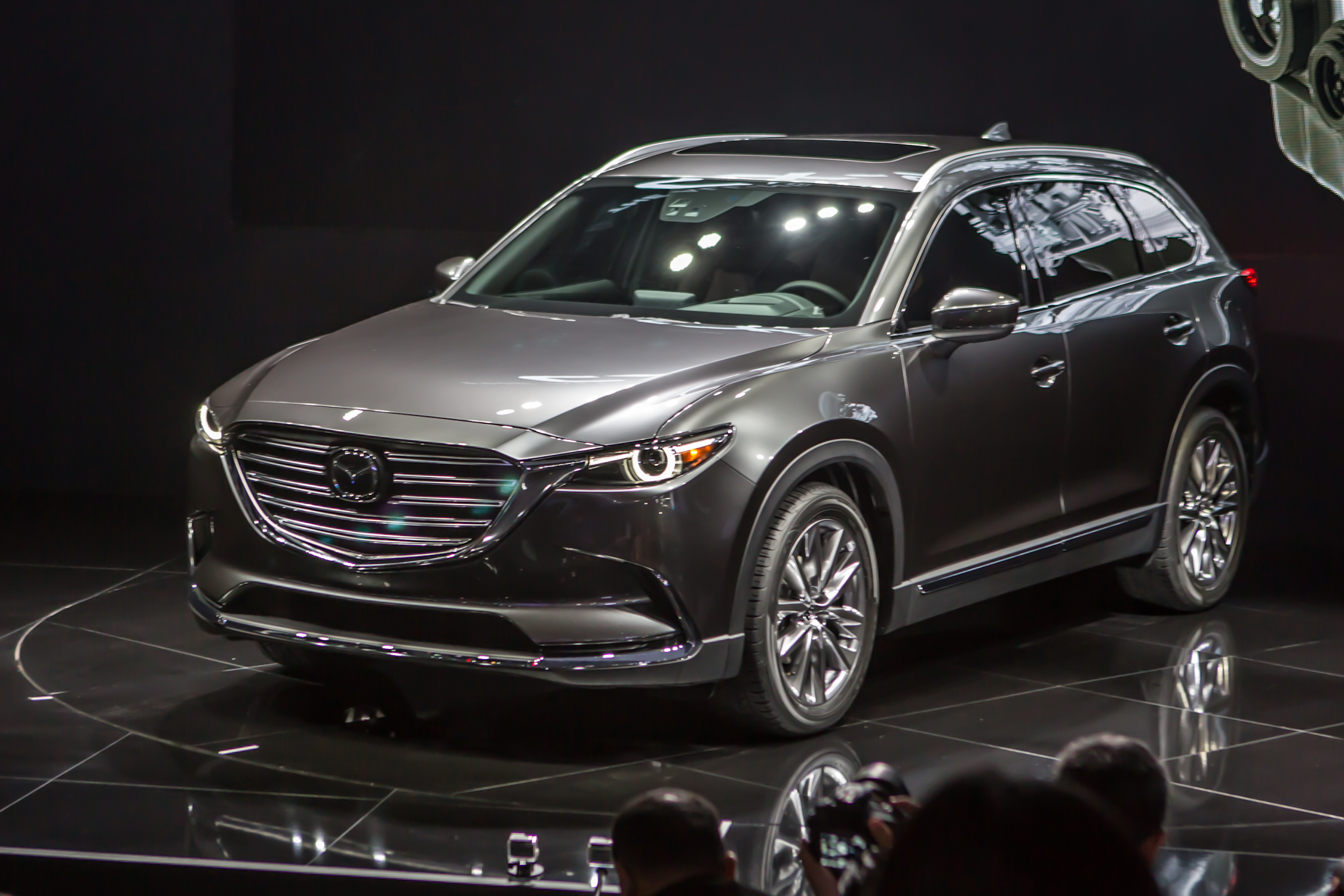 2016 Mazda CX-9
Mazda debuted the all-new CX-9 midsize three-row SUV at the Los Angeles Auto Show — the largest model in Mazda’s lineup with the latest take on the KODO Soul of Motion design. Starting from the bold front fascia, the design naturally flows to the rear. The CX-9 debuted in the Mazda’s new signature color: Machine Gray, which was specifically developed to complement the styling. The new CX-9 is powered by a new SKYACTIV-G 2.5-liter turbocharged engine designed to offer a great combination of performance in everyday driving situations as well as good fuel economy. The new engine produces 250 horsepower and 310 lb-ft of torque when using 93-octane gasoline, and 227 horsepower with 87-octane gas; it has a 6-speed automatic transmission. 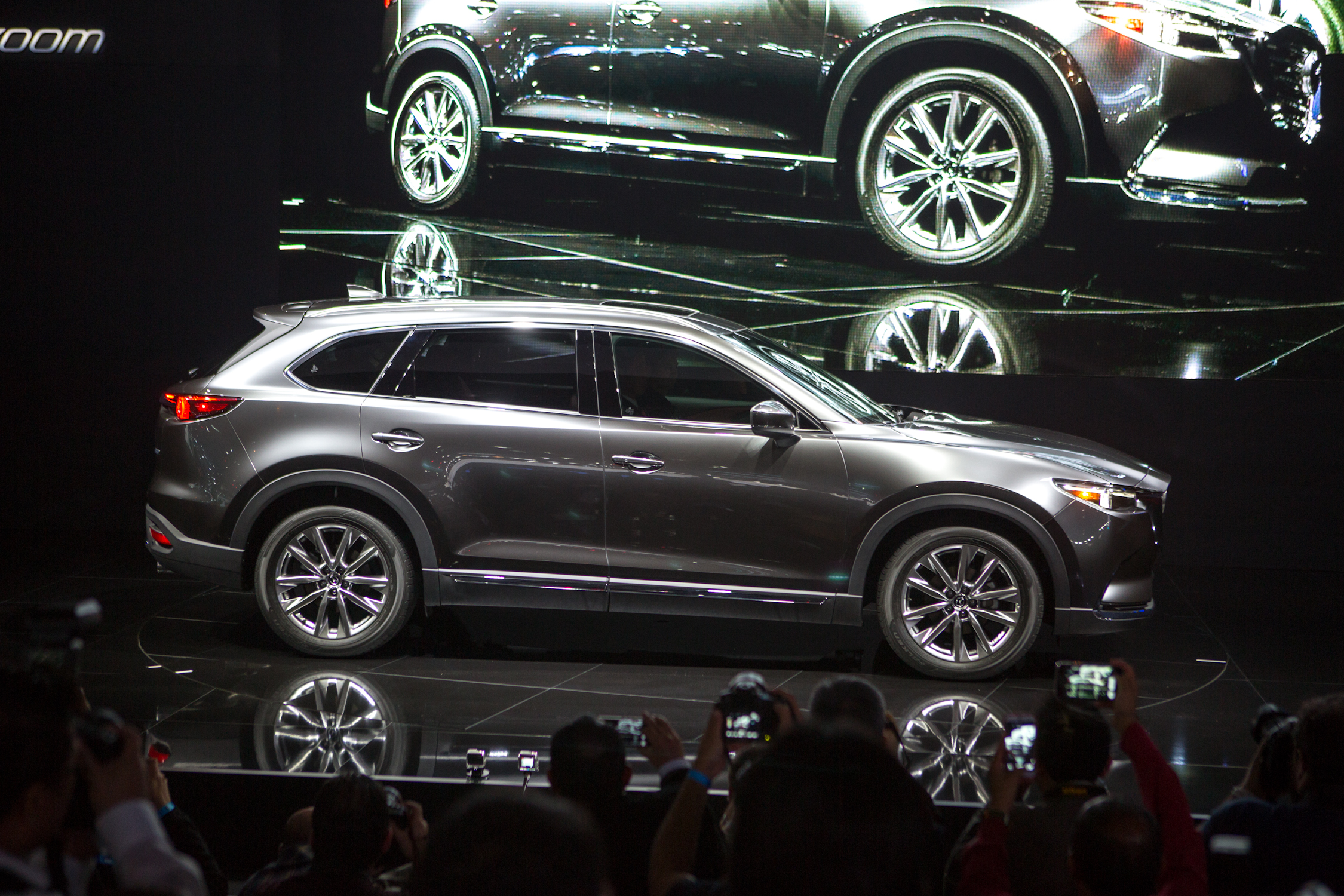 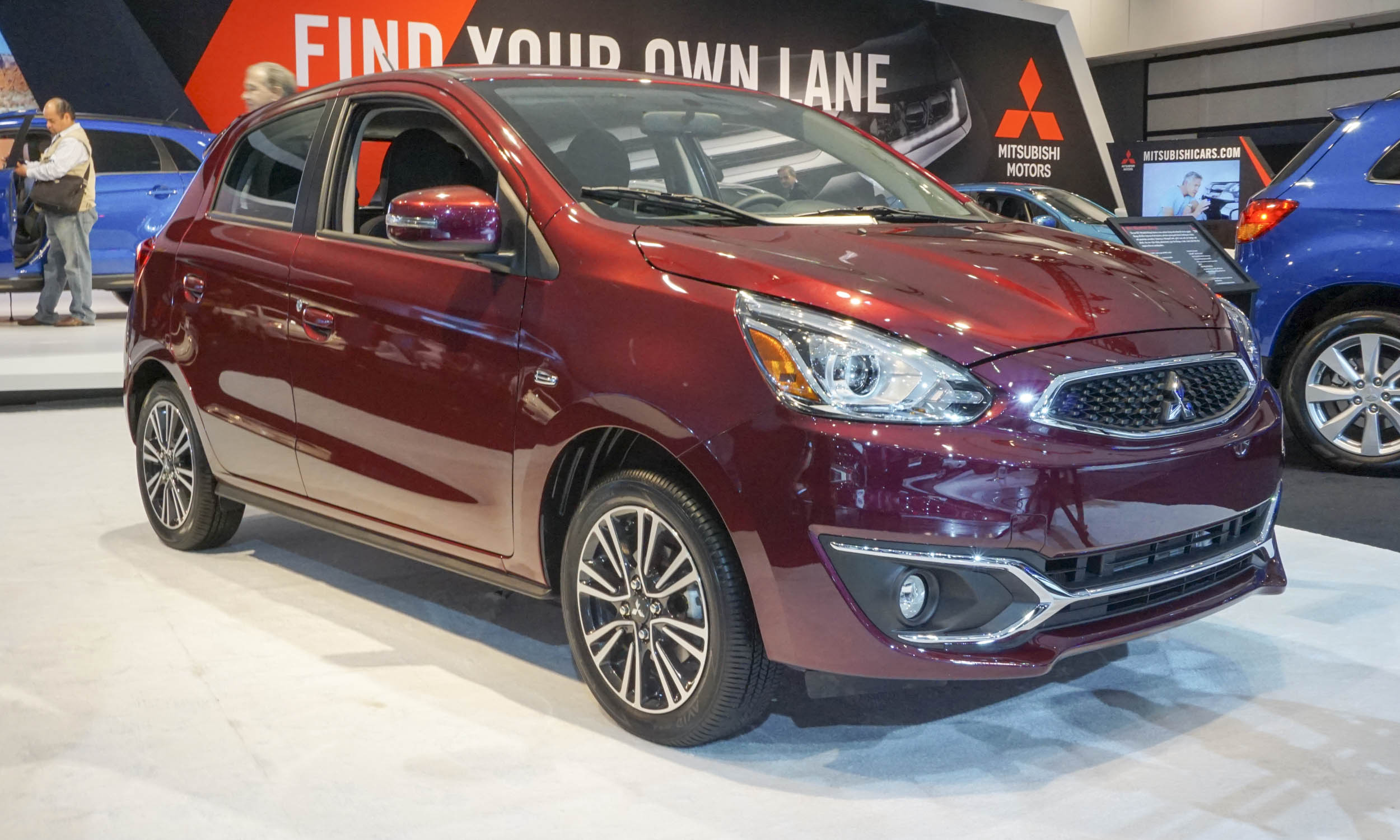 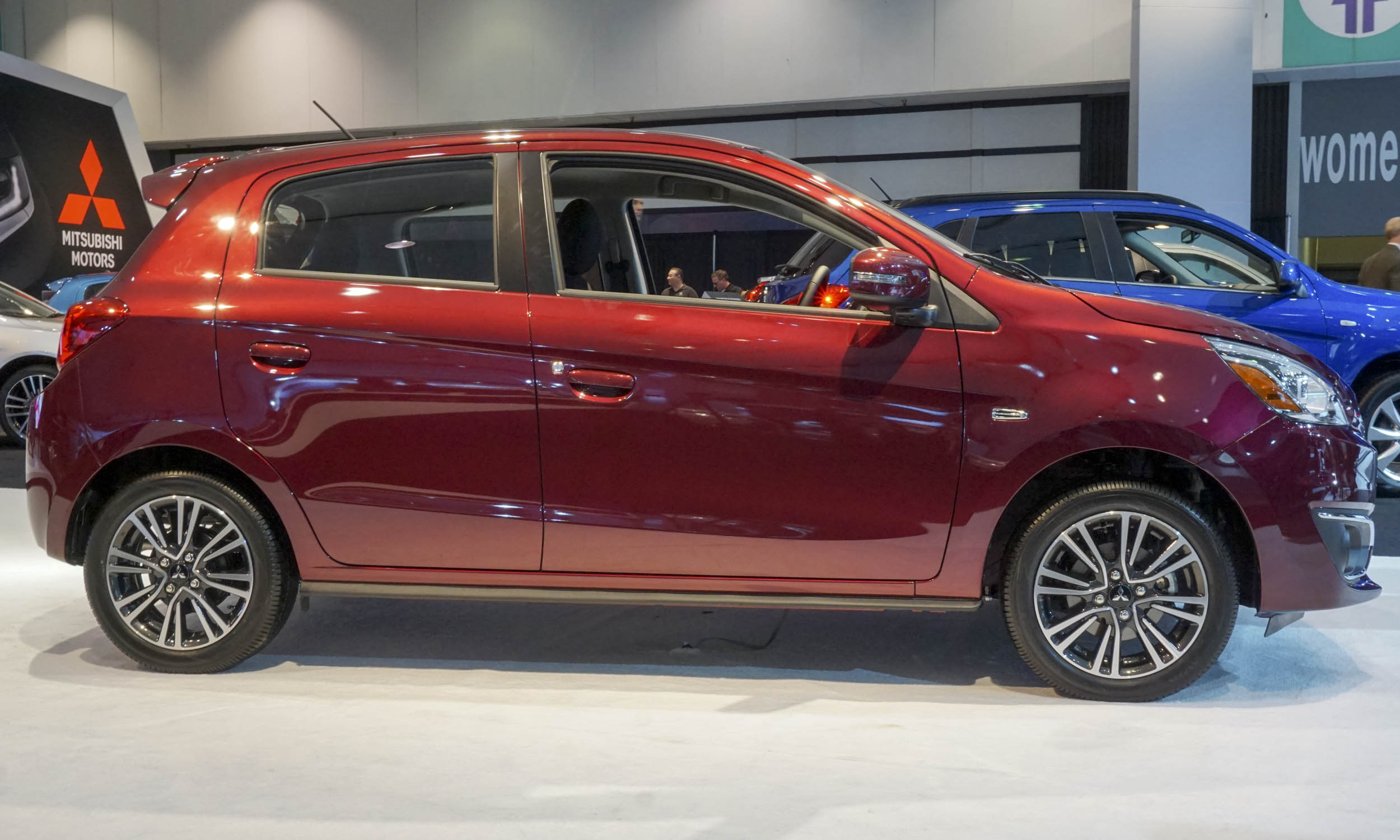 2017 Mitsubishi Mirage
Mirage’s efficiency and performance improve via a more aerodynamic exterior design, and the 1.2-liter 3-cylinder engine receives a new camshaft that provides a power increase to 78 horsepower and 74 lb-ft of torque. The Mirage also receives suspension upgrades and larger brakes to improve handling and braking performance. 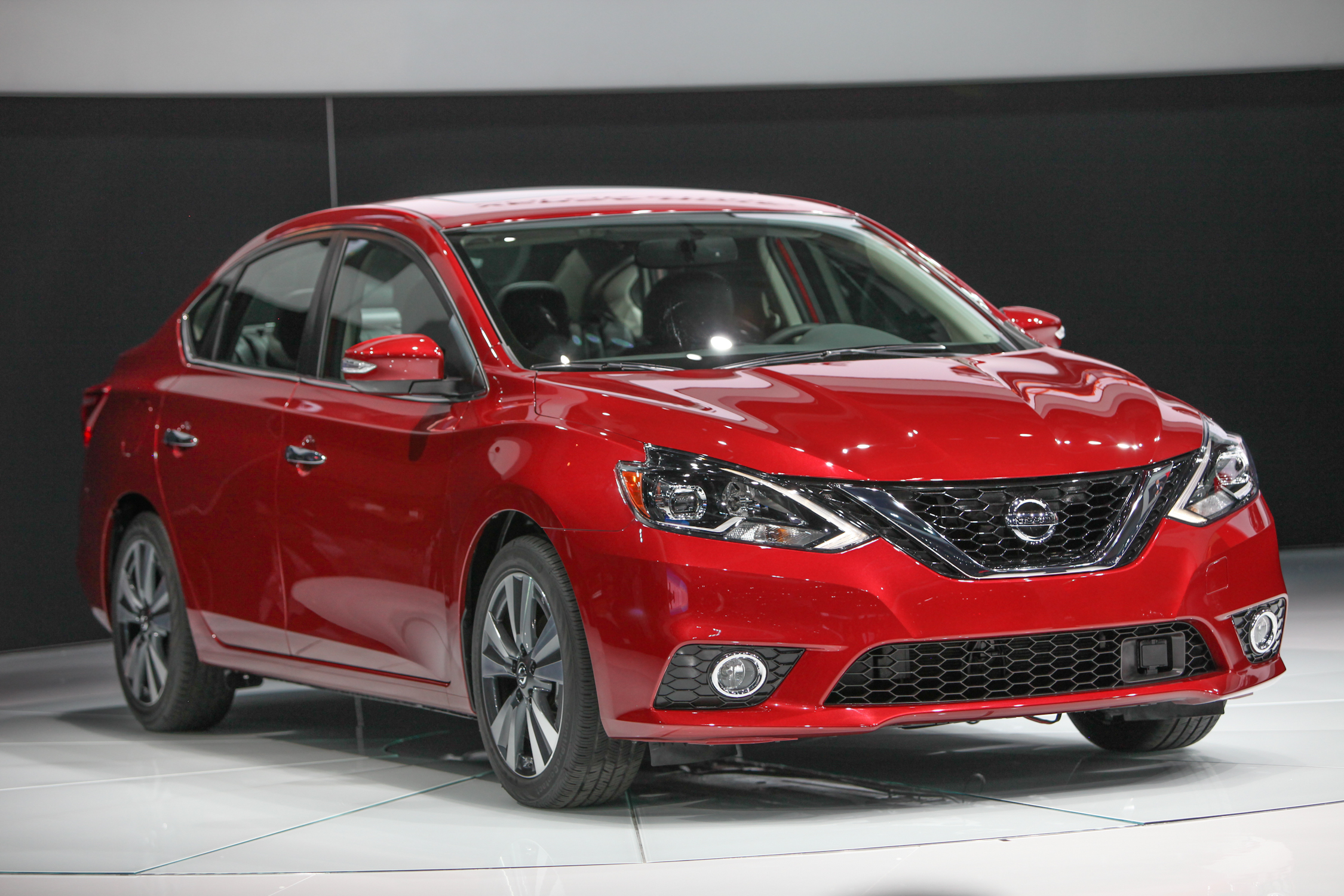 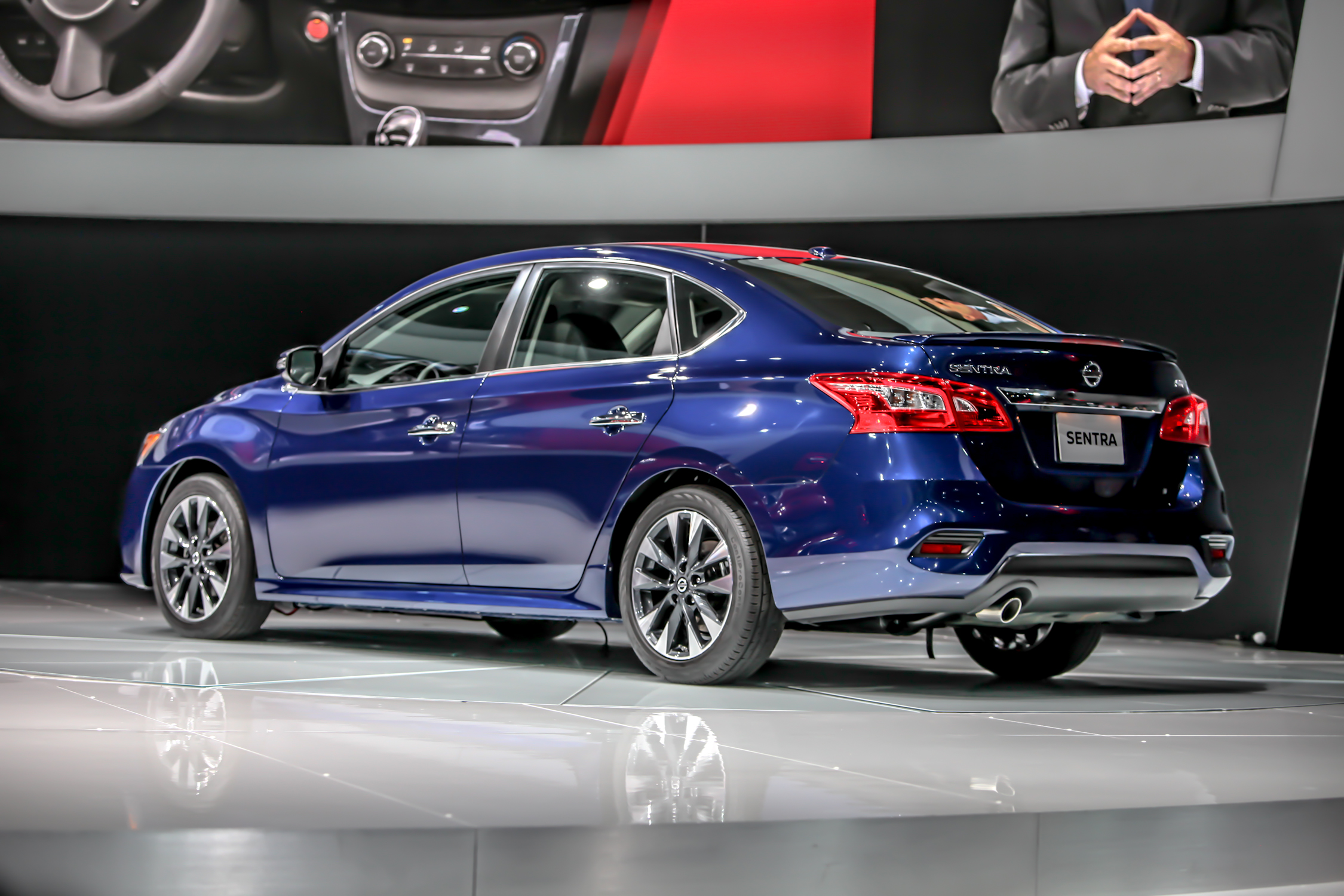 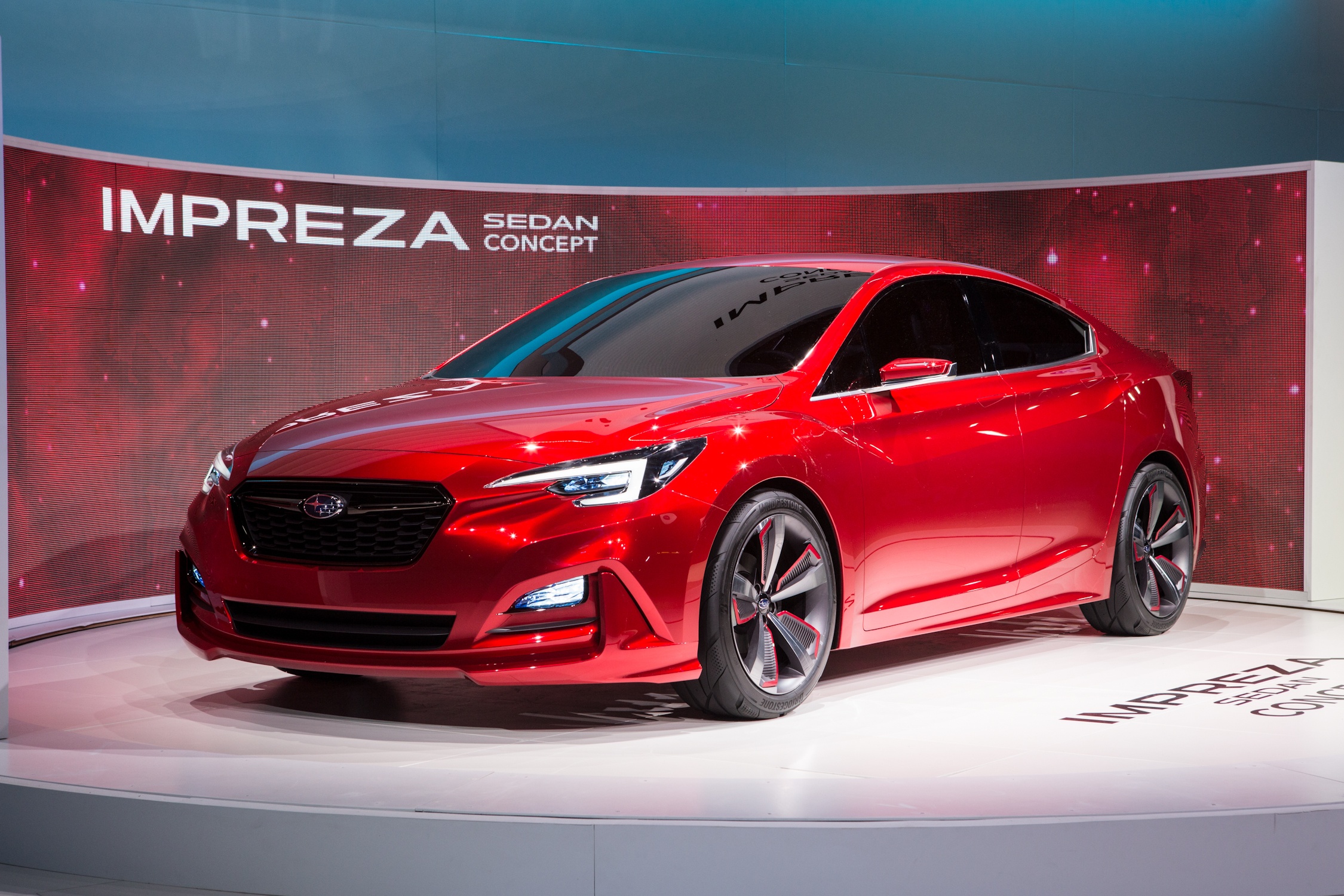 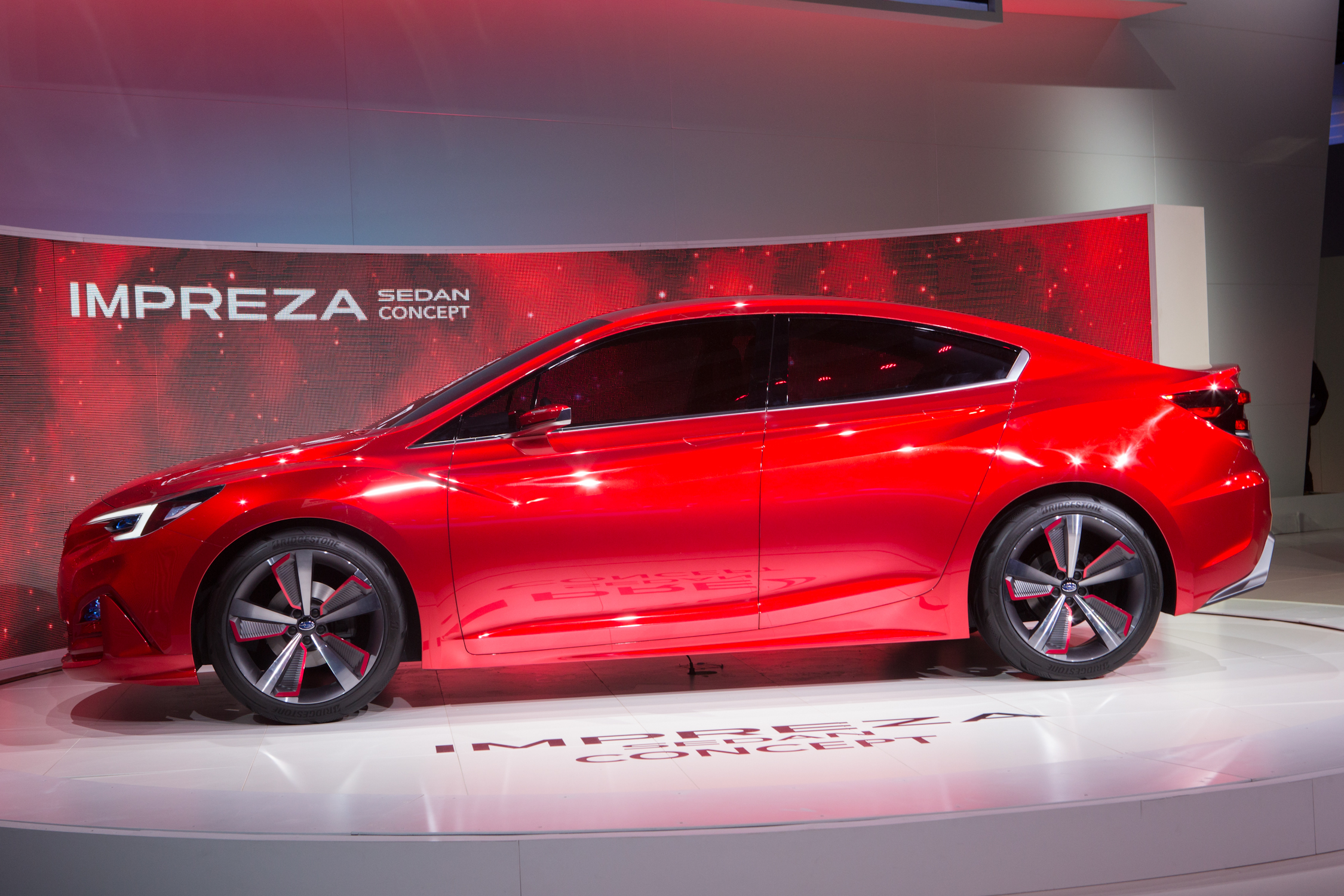 Subaru Impreza Sedan Concept
Impreza’s profile incorporates character lines that emphasize the extended fender flares, which in turn highlight the car’s all-wheel-drive capability; a rising beltline extends all the way to the integrated decklid spoiler. The sloped rear window terminates at the short decklid to give the 4-door sedan a coupe-like silhouette. Rear combination lights mirror the design of the headlights and add to the wide, low stance, and 5-spoke 19-inch wheels include red detailing. Gloss black exterior accents add a high-quality feel. 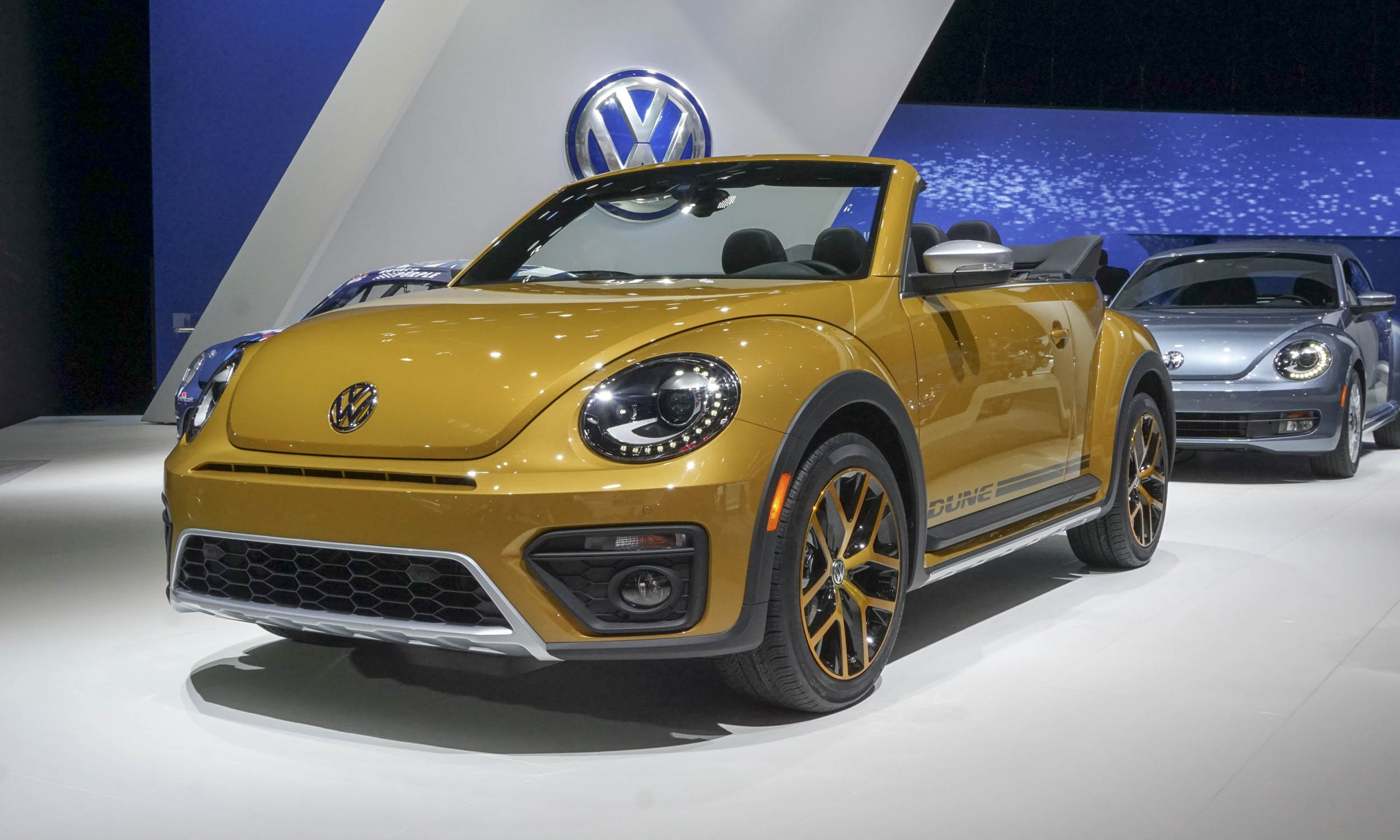 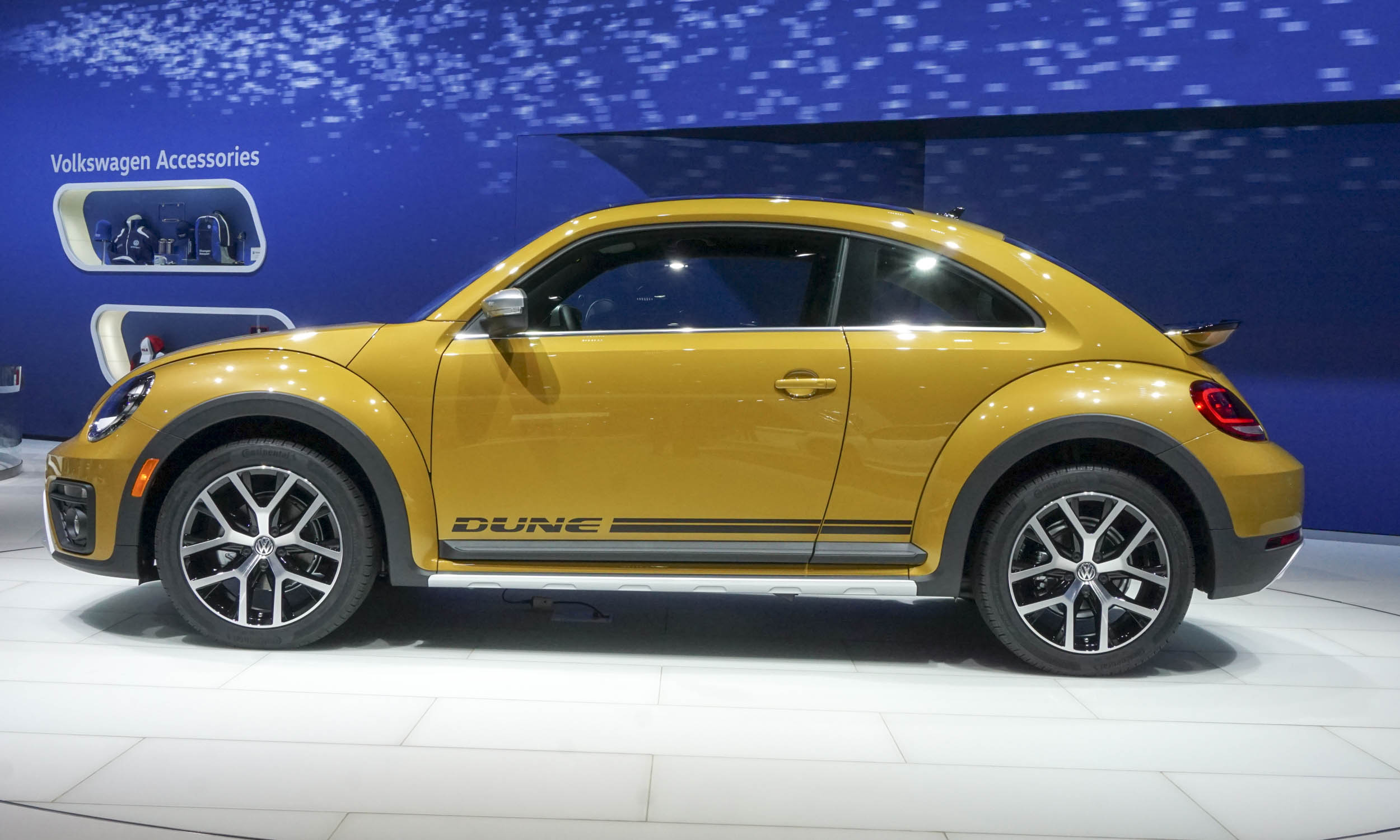 2016 Volkswagen Beetle Dune
The 2016 Beetle Dune has three exterior color choices: Sandstorm Yellow, Pure White and Deep Black Pearl. Sandstorm Yellow cars have body-color upper door trim and dash pads. Inside, the Dune features sport seats with orange contrast stitching and a leather-wrapped multifunction steering wheel. At launch Dune will be powered by a 1.8-liter direct-injection turbocharged TSI 4-cylinder engine that produces 170 horsepower and 184 lb-ft of torque. The Dune coupe is scheduled to go on sale in the first quarter of 2016, and the Dune convertible is scheduled to arrive in the third quarter of 2016.