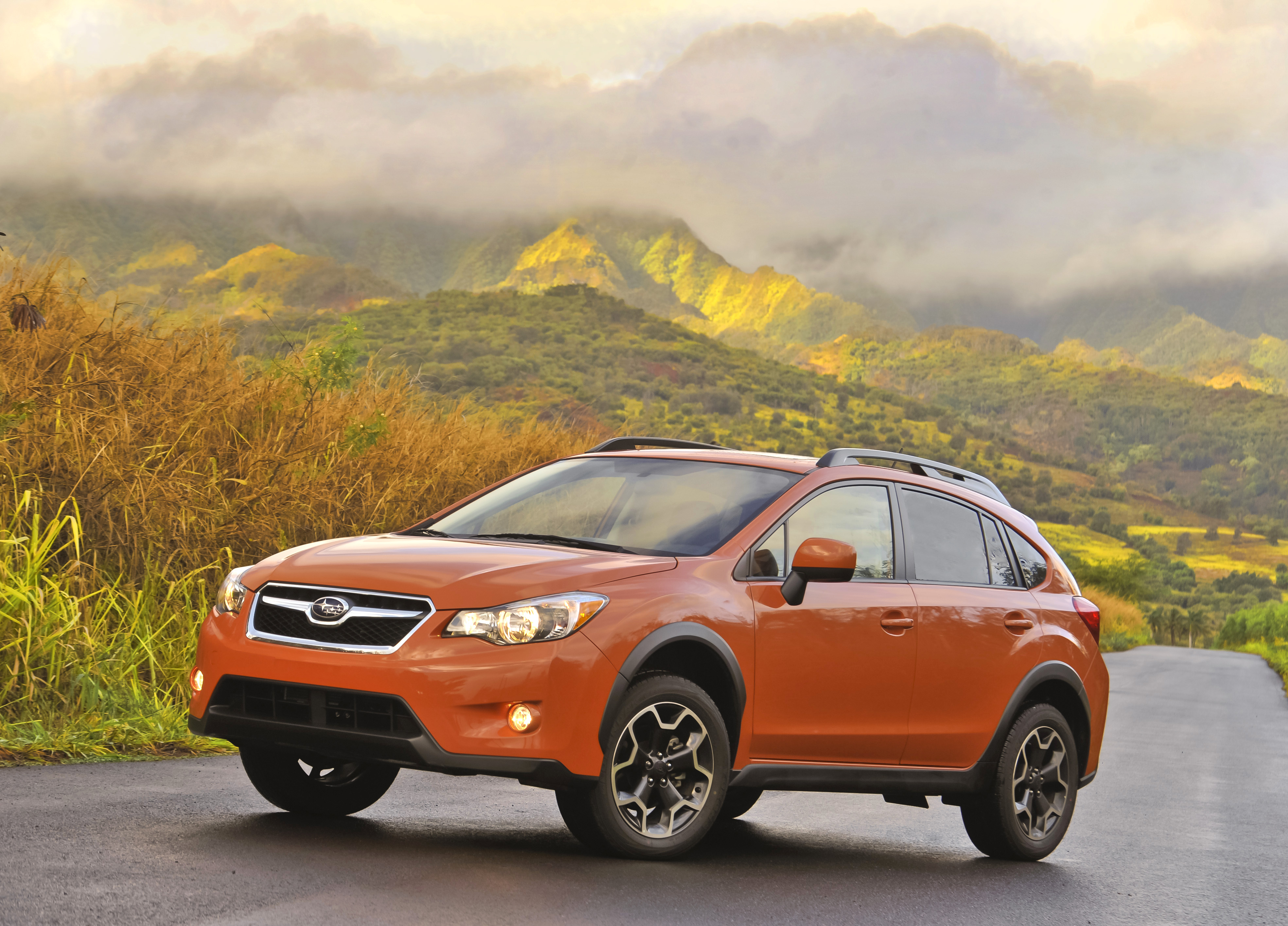 Fuel-Efficient SUVs
SUVs and crossovers continue to be among of the most popular vehicles in America, since their versatility makes them an attractive alternative to a sedans, minivans and wagons. That said, those who need an SUV or crossover don’t have to forgo good fuel economy. With hybrids, diesels and highly-efficient gas engines, the 2015 SUV lineup offers plenty of fuel-efficient choices. Since most SUV buyers are looking for 4WD, let’s review the 20 most fuel-efficient all-wheel-drive sport utes on the market. Note that EPA fuel economy is listed as city/hwy/combined mpg. 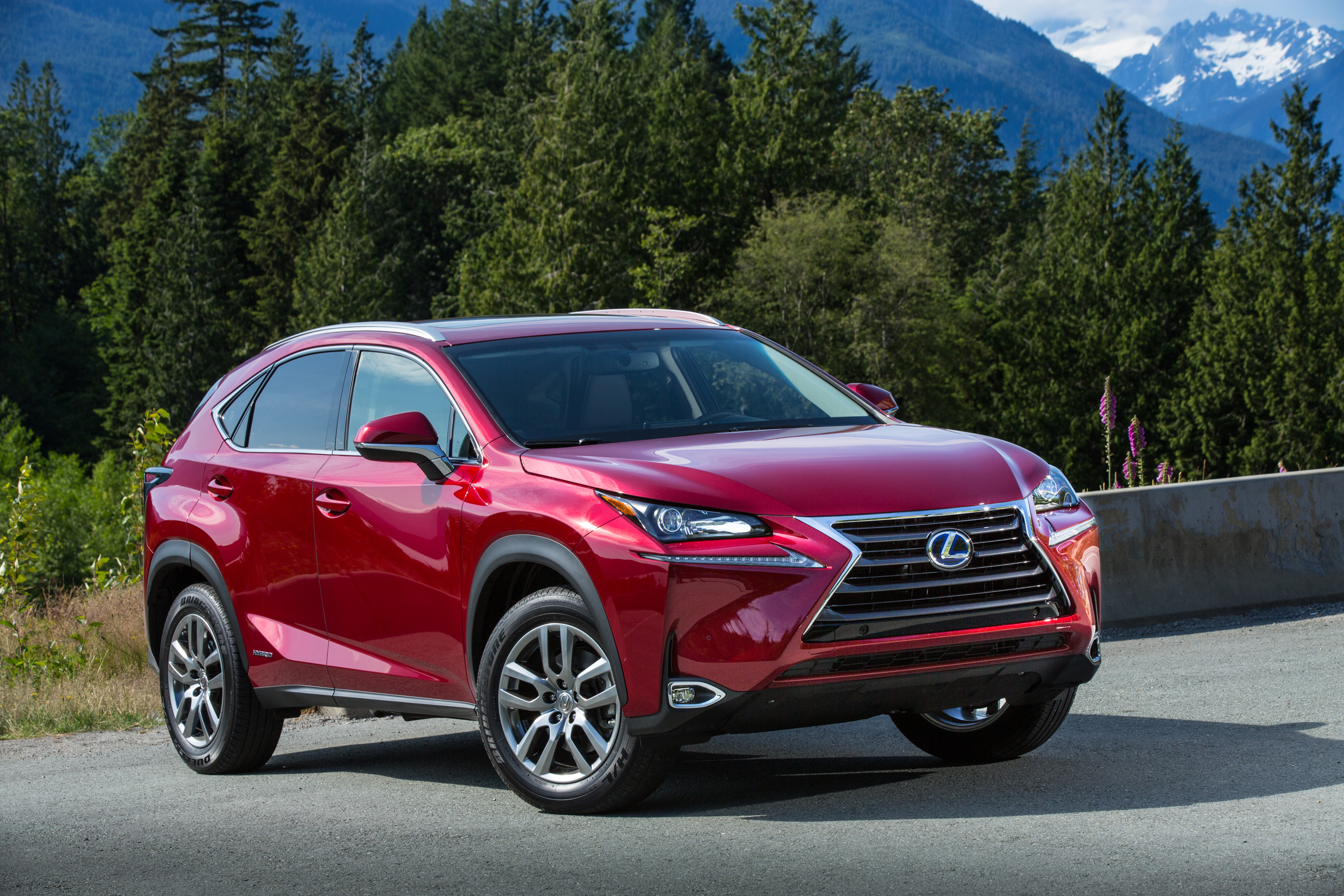 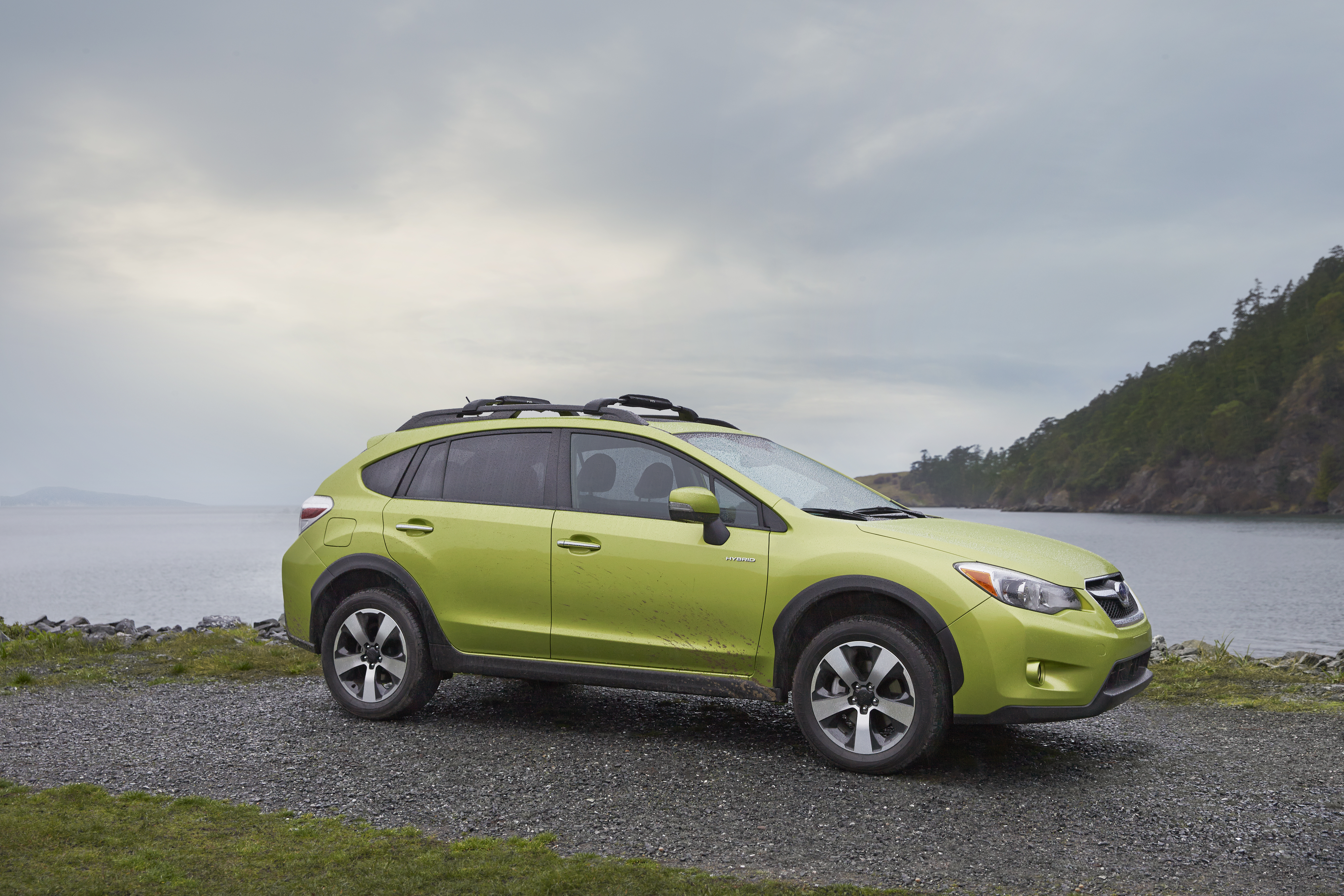 Subaru XV Crosstrek Hybrid
30/34/31 mpg
$25,995
When Subaru introduced the XV Crosstrek Hybrid in 2014, it was the first hybrid the company had ever offered in the U.S. The hybrid system provides a bit more power than the gas-only version, but it also weighs almost 400 pounds more so performance is similar between the two models. Fuel economy is similar as well; however, the hybrid is rated at 30 mpg in the city, compared to 26 mpg in the gas version. 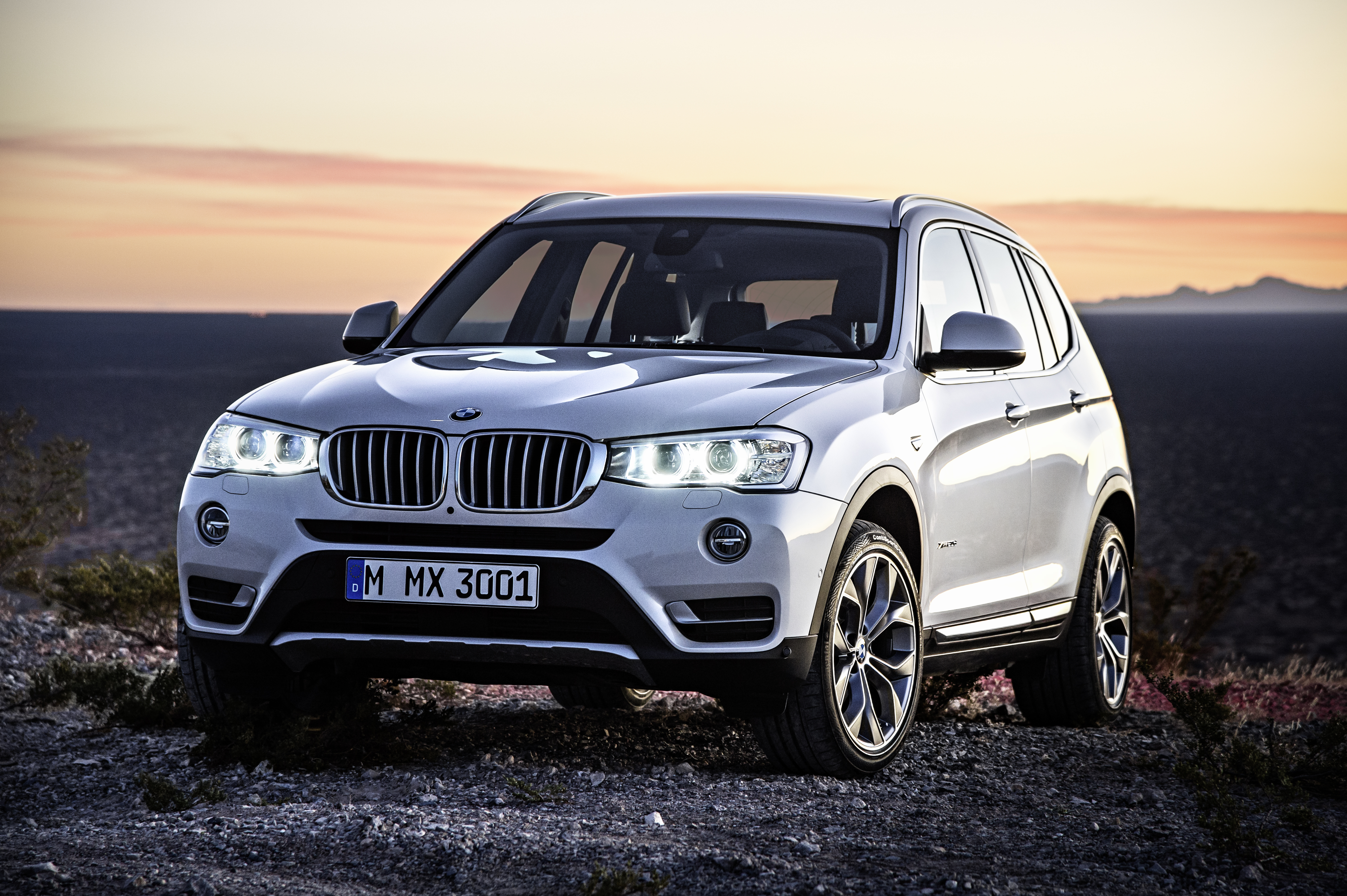 BMW X3 xDrive 28d
27/34/30 mpg
$42,000
BMW SUVs have always been more about “sport” than “Utility,” and in that vein this new diesel-powered X3 certainly doesn’t disappoint. The twin-turbo engine delivers 180 horsepower and — more importantly — 280 lb-ft of torque, which means it feels very quick off the line. With an 8-speed automatic transmission the X3 28d is very fuel efficient, claiming 34 mpg on the highway. 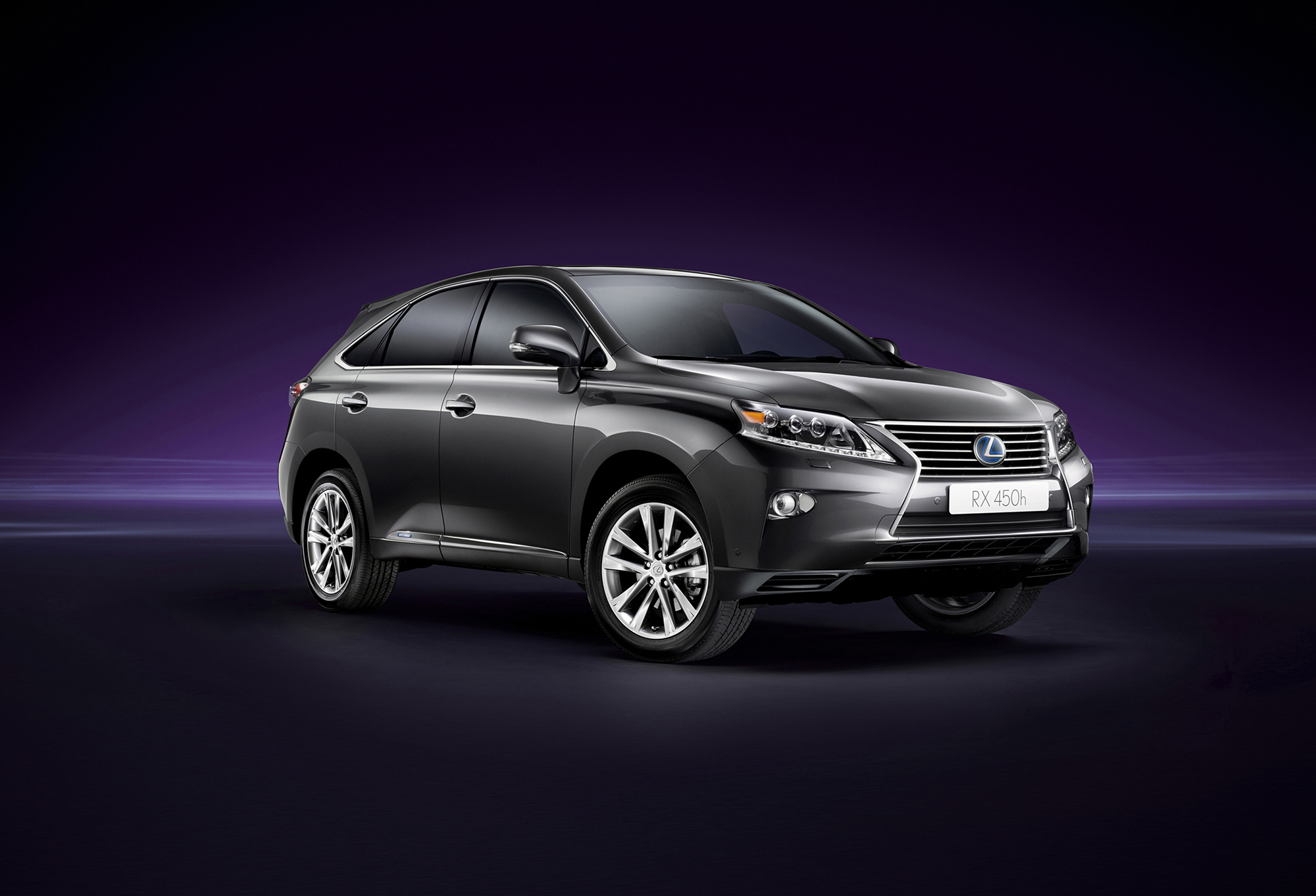 Lexus RX 450h AWD
30/28/29 mpg
MSRP: $49,020
Proving that hybrids don’t have to give up power to be fuel efficient, the Lexus RX boasts a combined output of almost 300 horsepower from its gas engine and two electric motors. Like the NX, the second electric motor powers the rear wheels when needed for traction or performance. As expected from a Lexus, the RX comes with a well-equipped, luxurious interior. 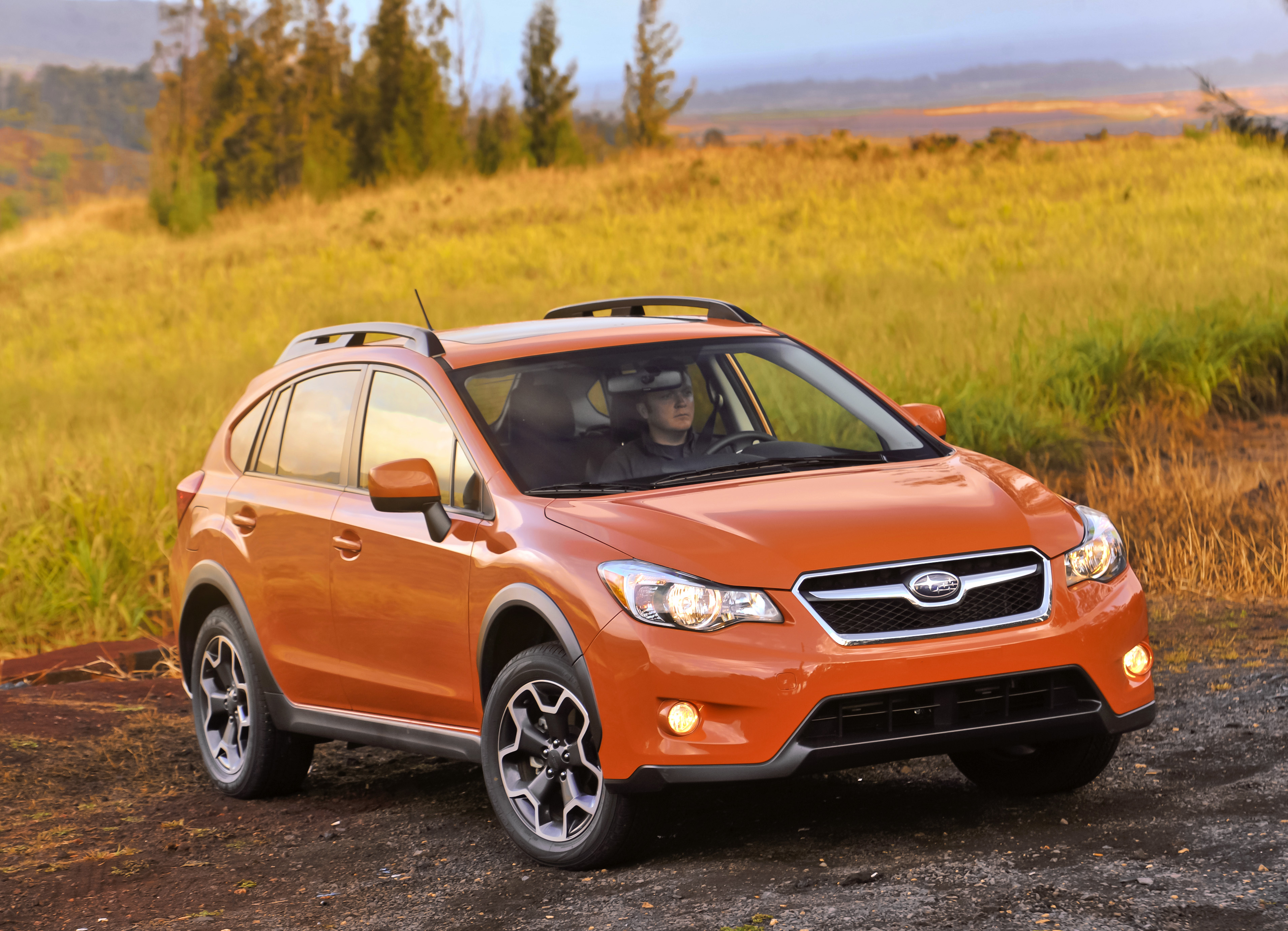 Subaru XV Crosstrek
26/34/29 mpg
MSRP: $21,595
Subaru made a brilliant move a few years ago when it took the compact Impreza and with few alterations converted it into the very popular XV Crosstrek. The small crossover is fun to drive, has good space for four as well as a usable cargo area. With 8.7 inches of ground clearance and full-time all-wheel drive, the Crosstrek is capable while delivering great fuel economy. 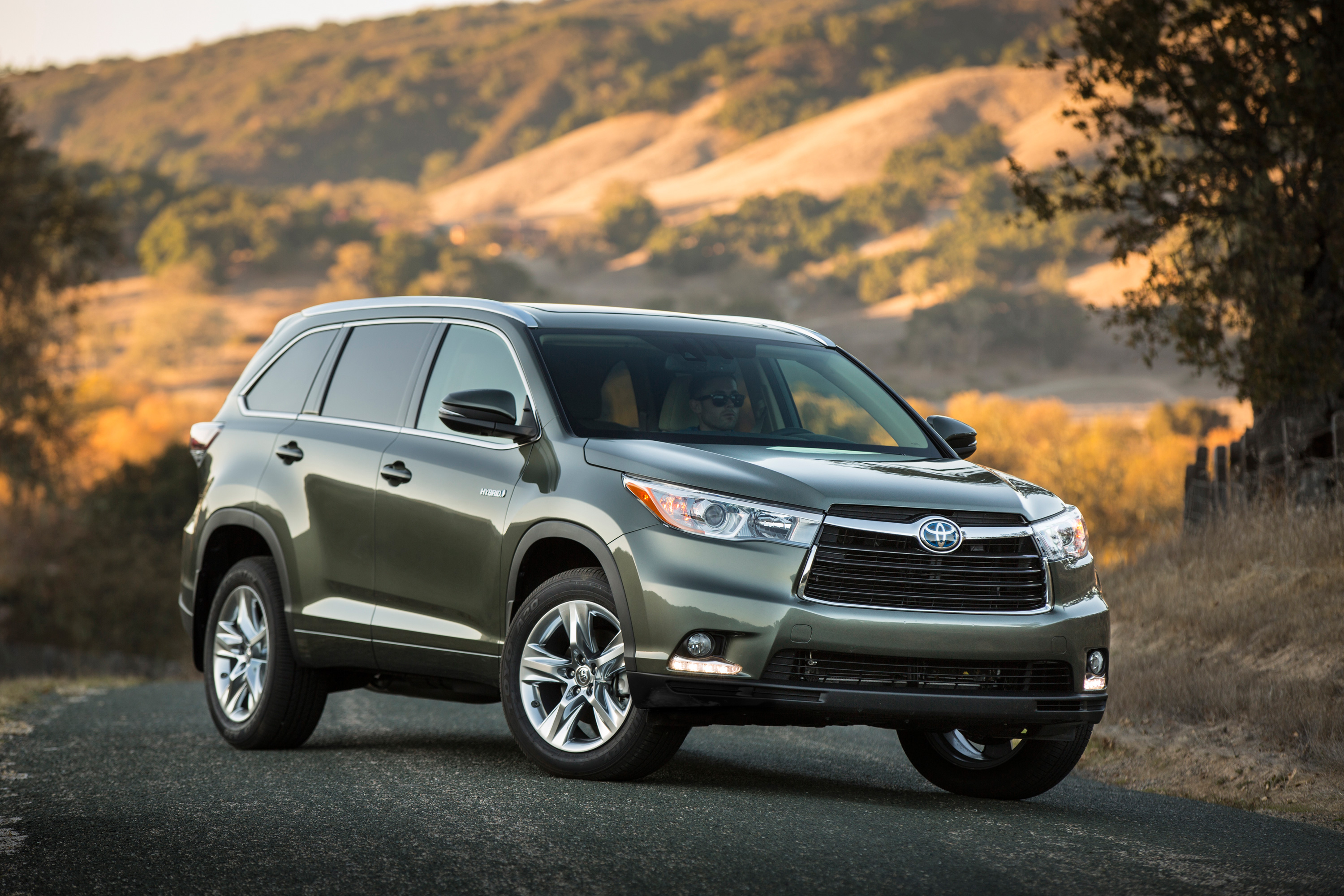 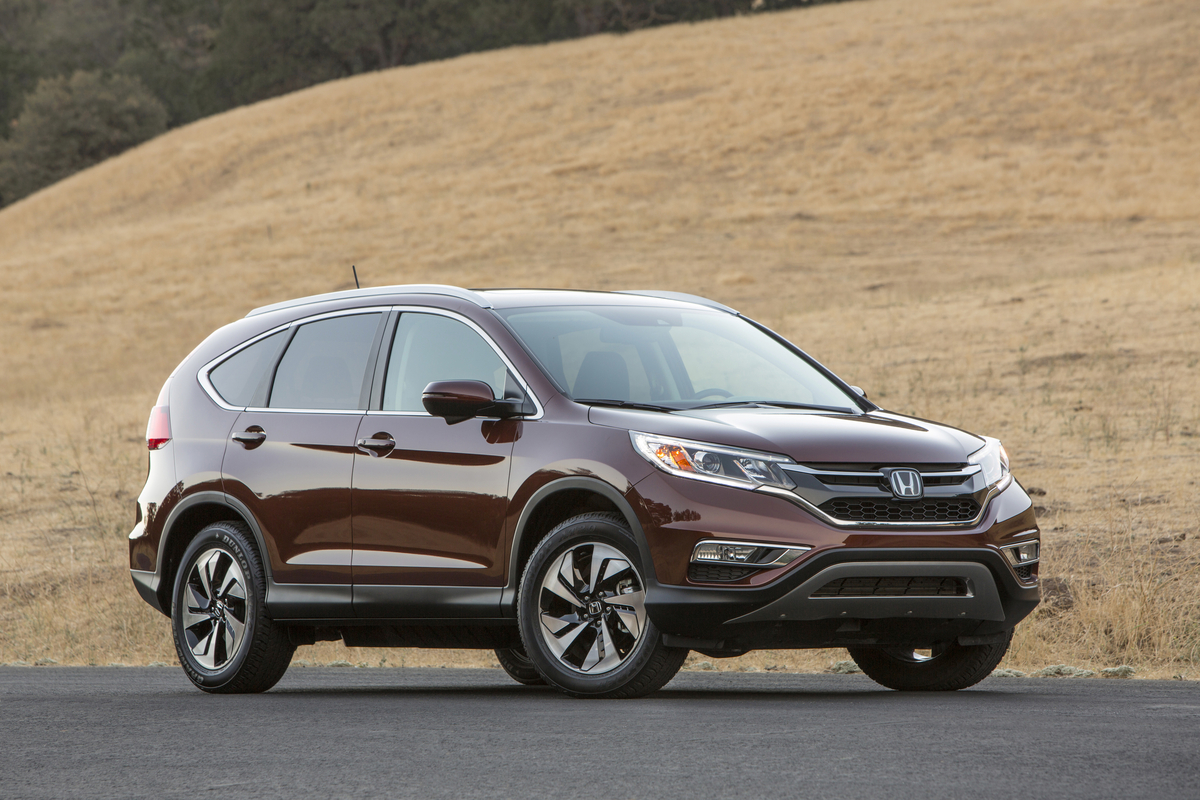 Honda CRV 4WD
26/33/28 mpg
MSRP: $26,670
It seems like 2015 is the year of the SUV — the Honda CR-V is also updated for the new model year with fresh styling and a new fuel-efficient “Earth Dreams Technology” powertrain. The very green-themed engine gets added power and torque as well improved fuel economy over the previous model year. 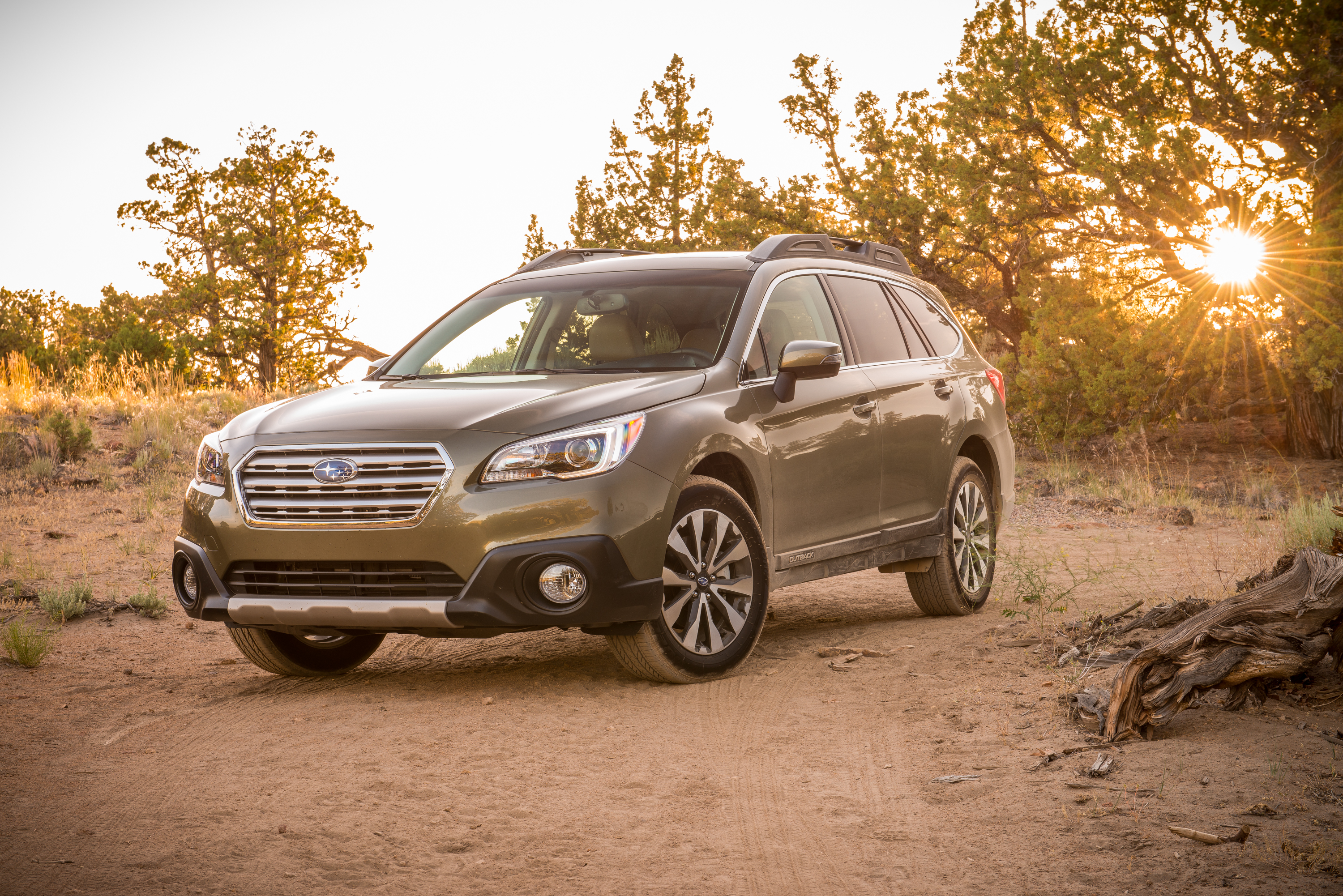 Subaru Outback
25/33/28 mpg
MSRP: $24,895
The Subaru Outback was one of the original crossovers, combining SUV utility with the comfort and convenience of a wagon. Completely new for 2015, Subaru has stayed true to that original formula. And while it is larger with added high-tech features and capability, Outback’s fuel economy remains impressive, especially for such a large vehicle. 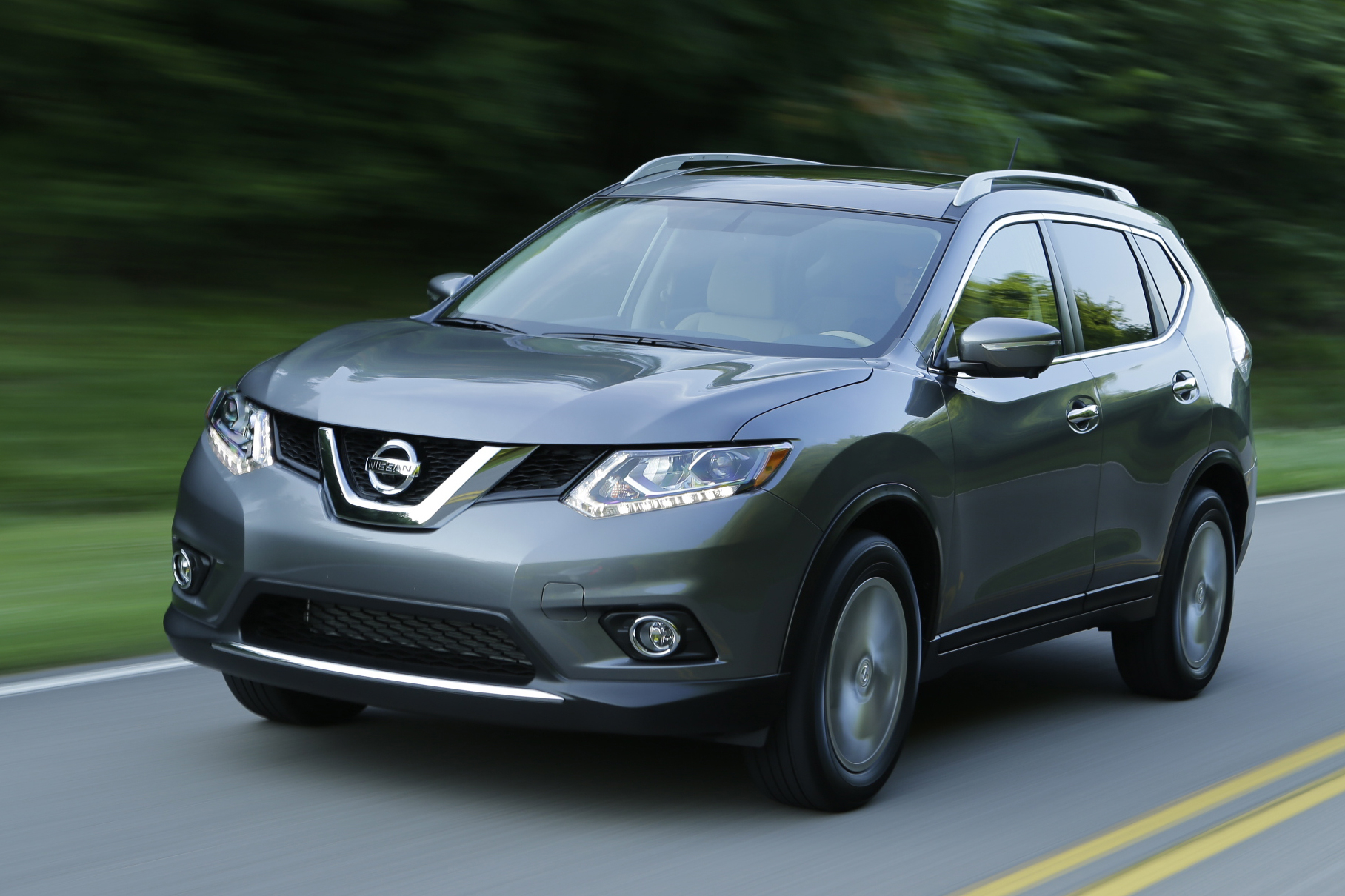 Nissan Rogue AWD
25/32/28 mpg
MSRP: $24,140
Nissan’s most fuel-efficient SUV was completely redesigned last year. With styling that fits in with the rest of the Nissan lineup, the Rogue offers great versatility with “EZ Flex” seating. The small SUV can accommodate to seven or be configured for impressive cargo-carrying ability. Rogue is available with a number of high-tech features — a favorite is the Around View Monitor, which lets the driver see around the car when maneuvering into a parking space. 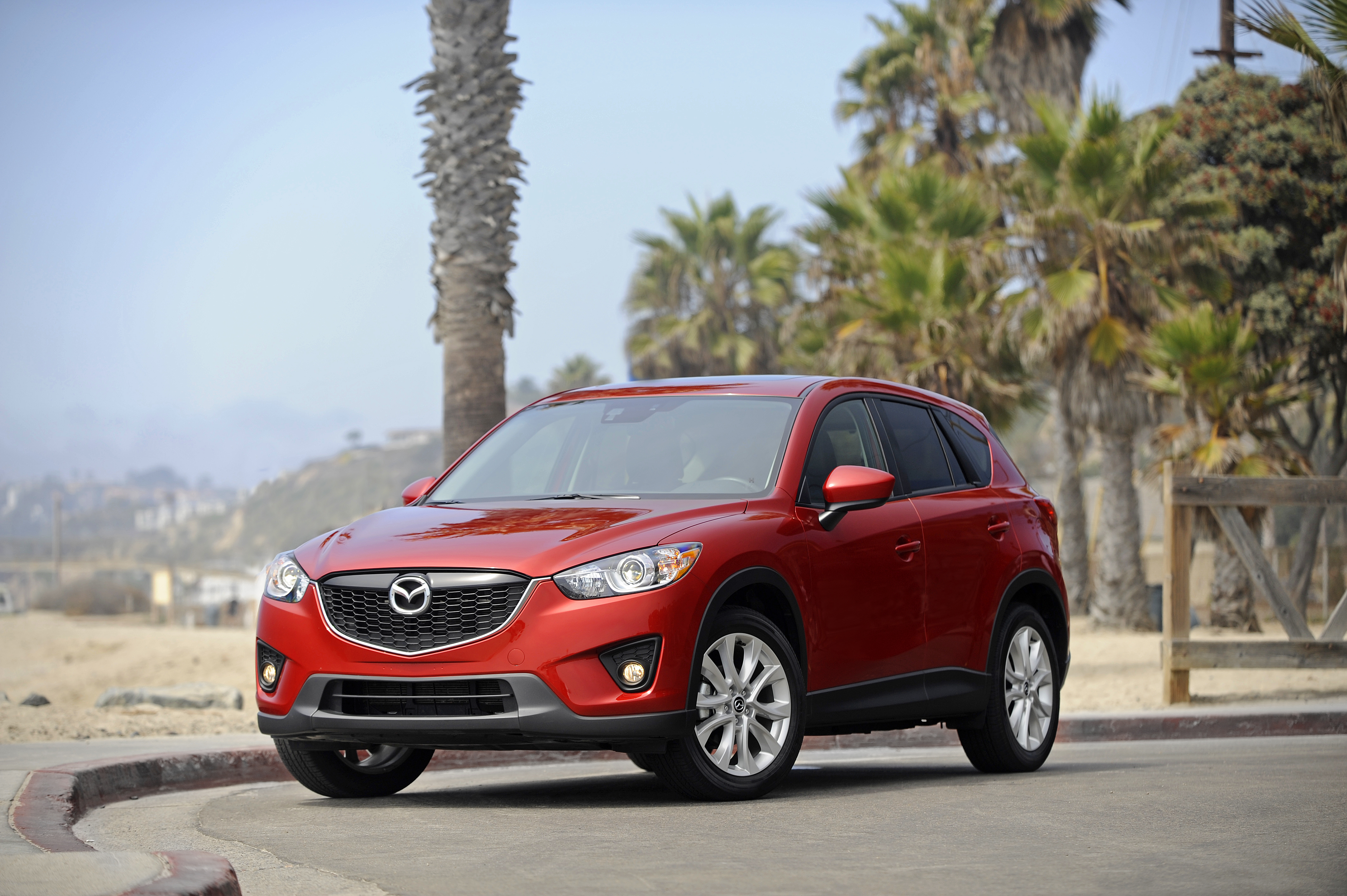 Mazda CX-5 4WD
25/31/28 mpg
MSRP: $24,395
Many years have passed since Mazda coined its “Zoom Zoom” tagline, but it still works for their current lineup, including the CX-5. Part of the overall SKYACTIV technology suite, the 2.0-liter powerplant offers snappy performance as well as impressive fuel economy, which has helped make the CX-5 Mazda’s best-selling SUV. 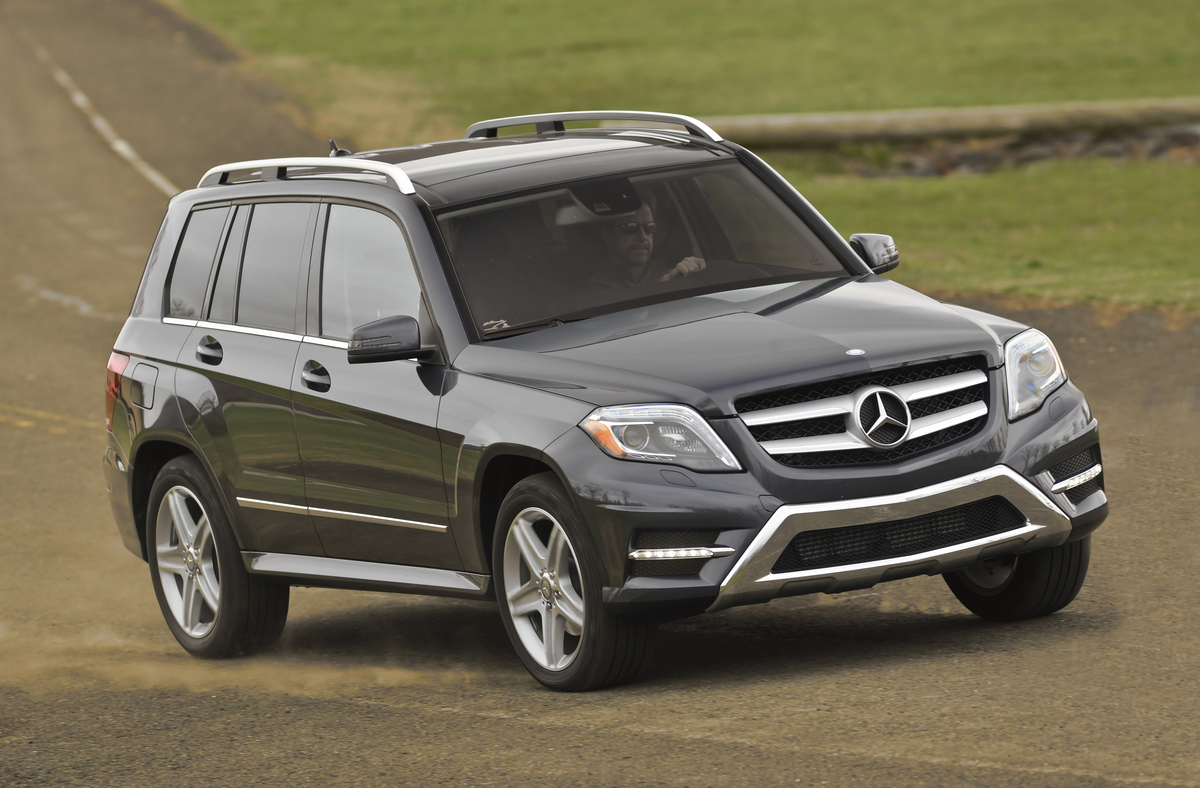 Mercedes-Benz GLK 250 BlueTEC 4Matic
24/33/28 mpg
MSRP: $39,400
Mercedes has had great success producing highly efficient diesel models, and the GLK is no exception. The diesel engine uses two turbochargers that develop a broader range of power and torque while providing the fuel economy expected from a diesel. And in keeping with Mercedes, the GLK is nicely equipped with a luxurious interior and an impressive array of safety technology. The GLK will soon be renamed the GLC in accordance with a new naming system recently announced by Mercedes. 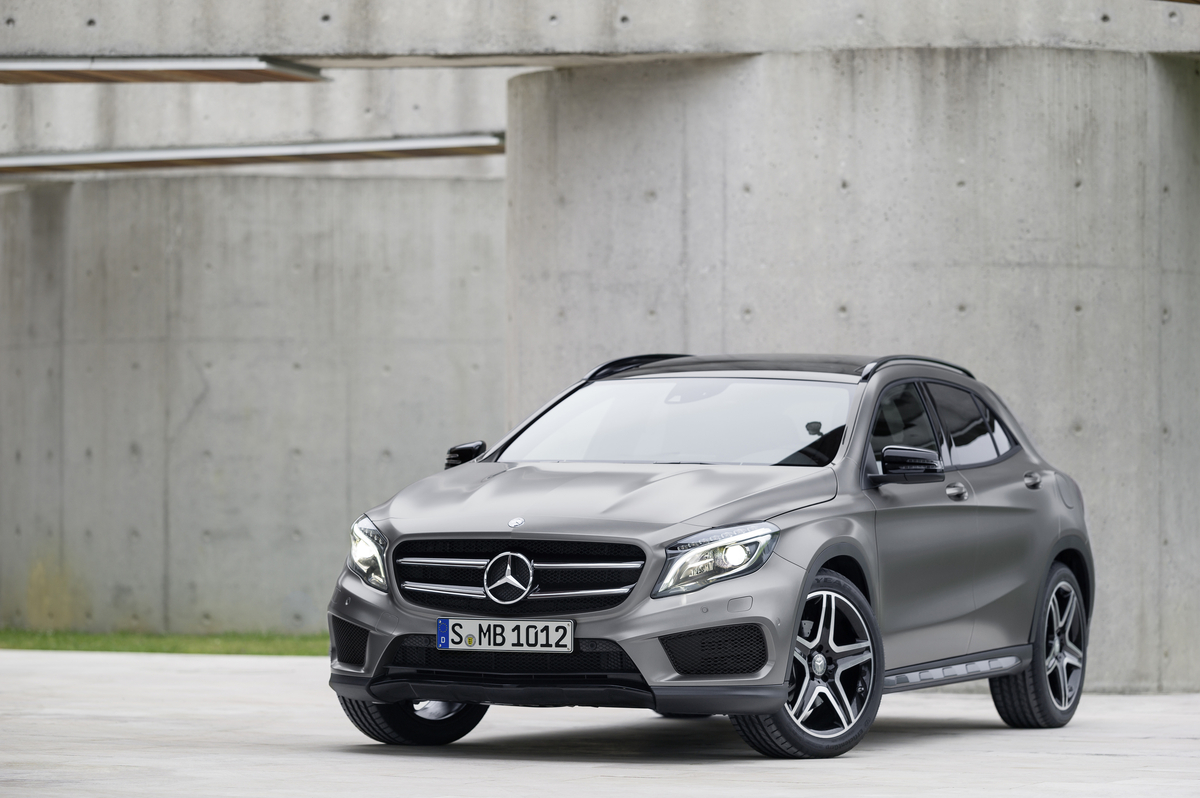 Mercedes-Benz GLA 250 4matic
24/32/27 mpg
MSRP: $39,400
The newest member of the Mercedes-Benz SUV lineup, the GLA seems more car-like than SUV. No matter what you call it, the GLA features a sleeker, more aerodynamic design than the slightly larger GLK. The GLA’s turbocharged and direct-injected 4-cylinder engine generates more than 200 horsepower — which is more than adequate for a vehicle of its size — but at the same time returns fuel economy on par with the company’s diesel offerings. 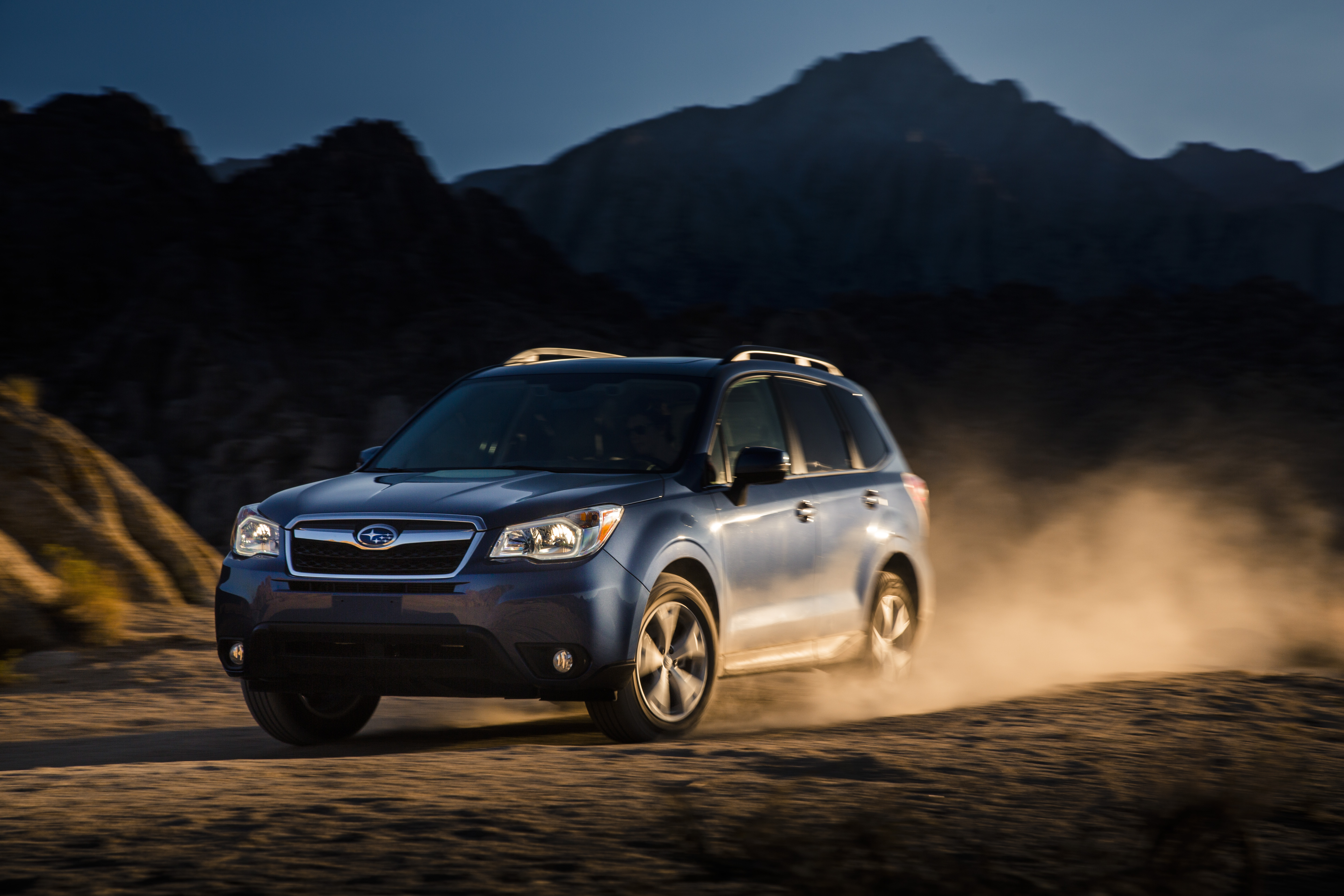 Subaru Forester
24/32/27 mpg
MSRP: $22,195
Forester was all new last year, making the Subaru SUV lineup one of the newest on the market as well as one of the most fuel-efficient. For 2015 Forester earns an IIHS Top Safety Pick+ rating with Subaru’s innovative EyeSight system, which integrates Adaptive Cruise Control, Pre-Collision Braking and Vehicle Lane Departure Warning. 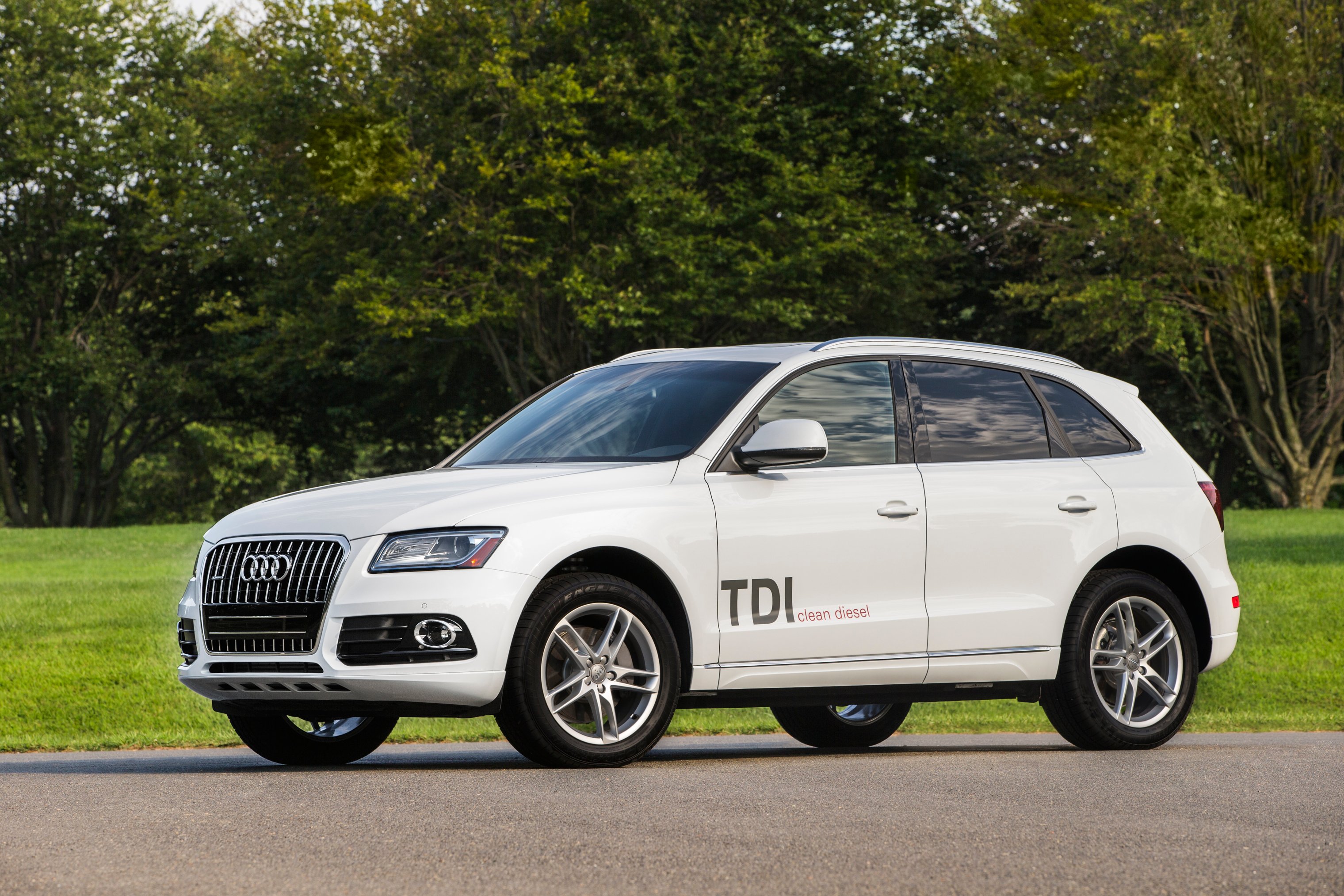 Audi Q5 TDI Quattro
24/31/27 mpg
MSRP: $38,900
Audi is well known for its legendary quattro all-wheel drive system as well as its efficient diesel powertrains. Last year the company put both into its compact Q5 SUV. The Q5 is already a sporty, fun-to-drive luxury crossover, but the diesel offering adds considerable oomph to the tune of 428 ft-lb of torque. With diesels offered in compact SUVs from Audi, BMW and Mercedes, the luxury crossover buyer suddenly has some rather fuel-efficient options in the market. 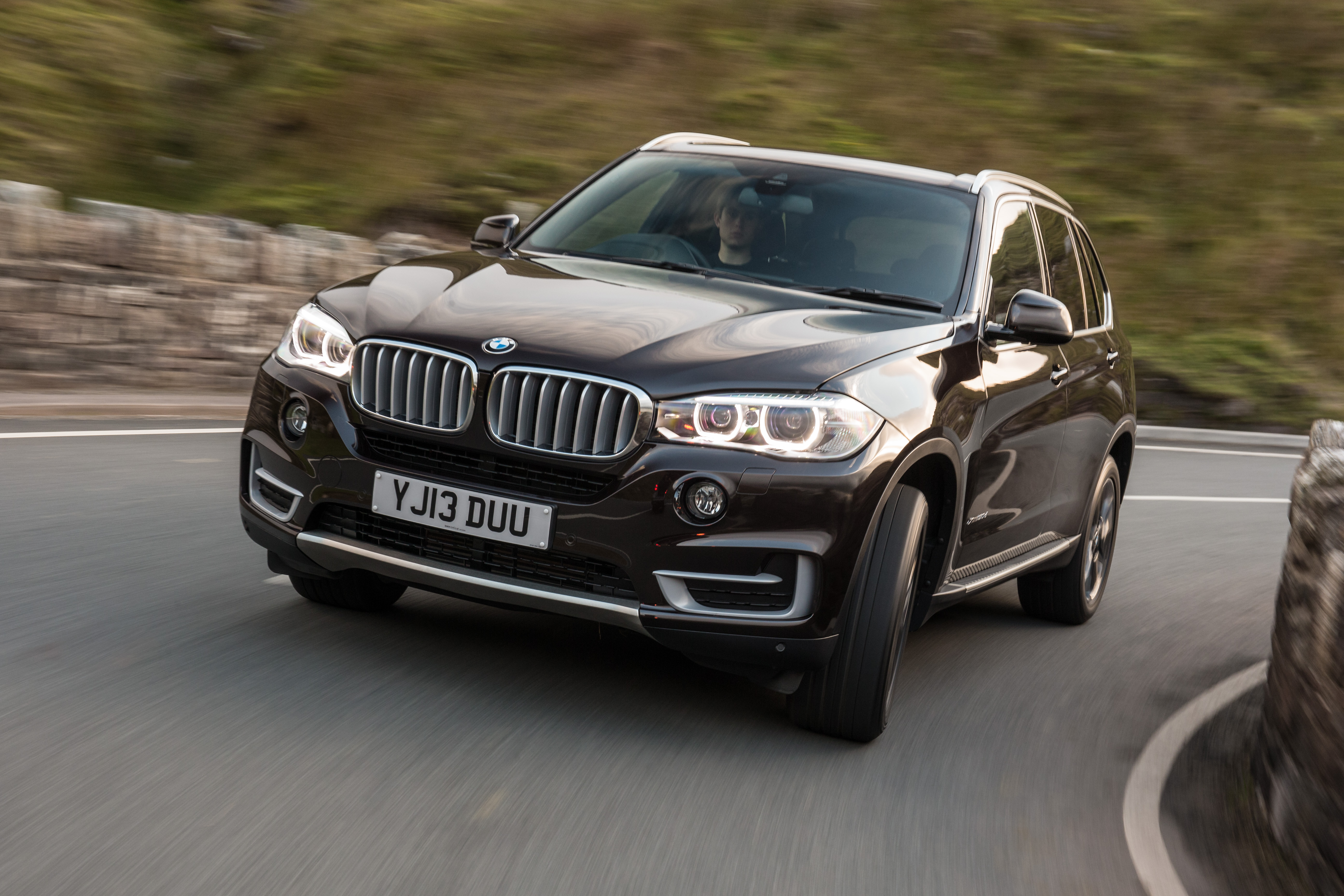 BMW X5 xDrive 35d
24/31/27 mpg
MSRP: $57,000
If you’re shopping for a BMW X5, the 35d is easily one of the smartest choices in the lineup. Possessing the same high level of amenities and safety equipment as other X5s, the diesel not only improves fuel economy by 4 mpg on the highway and 6 mpg in the city, it also puts out more than 400 lb-ft of torque to give the sporty SUV excellent performance. 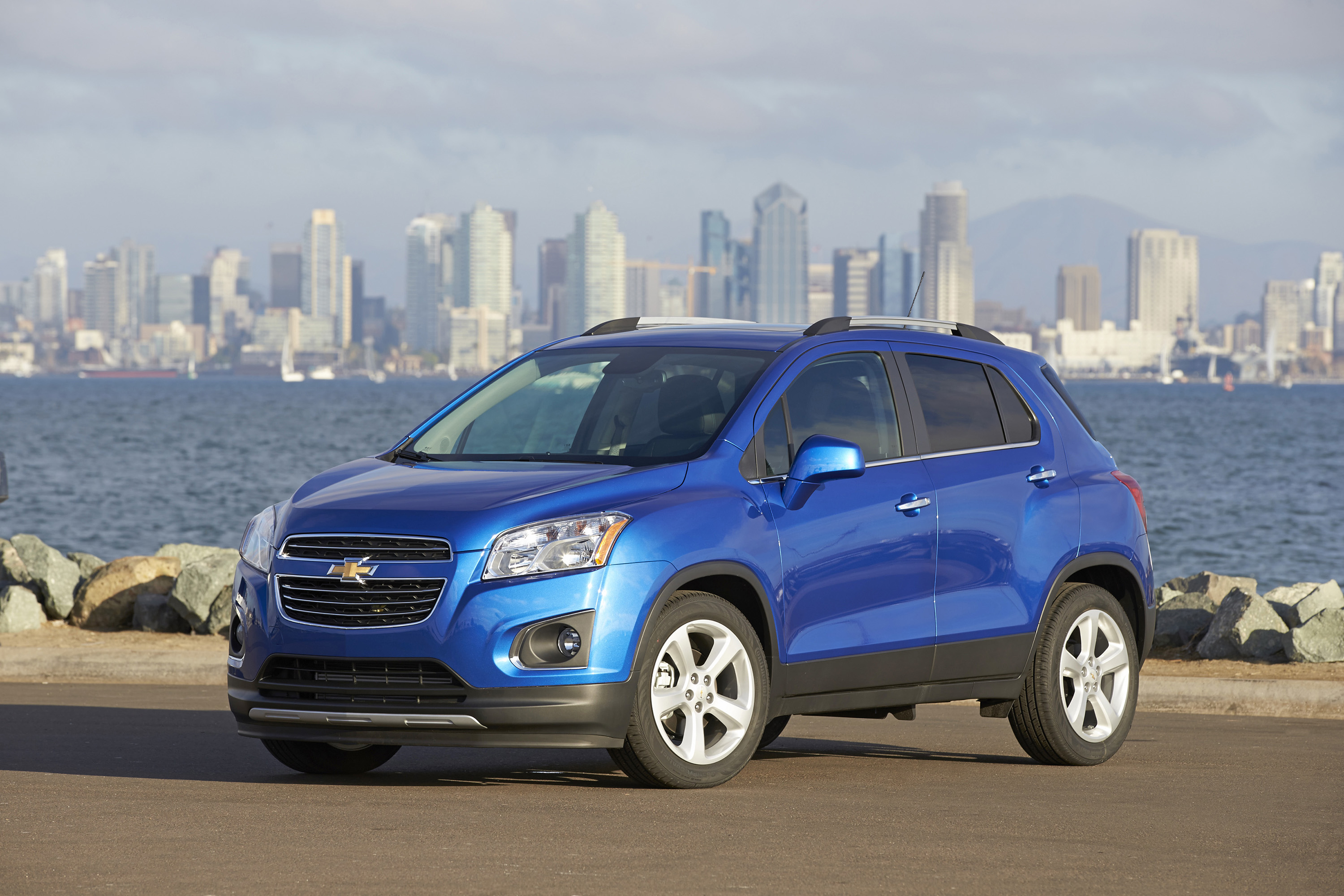 Chevrolet Trax AWD
24/31/27 mpg
MSRP: $21,540
As the compact crossover market continues to grow, American car shoppers are being introduced to the Chevy Trax, which is already on sale in 66 global markets. Trax seats five, and the split-folding rear seat adds considerable versatility to the small crossover. It also comes standard with GM’s latest tech offering — OnStar with 4G LTE and a built-in Wi-Fi hotspot. Power comes from a rather small 1.4-liter turbocharged engine producing 138 horsepower. 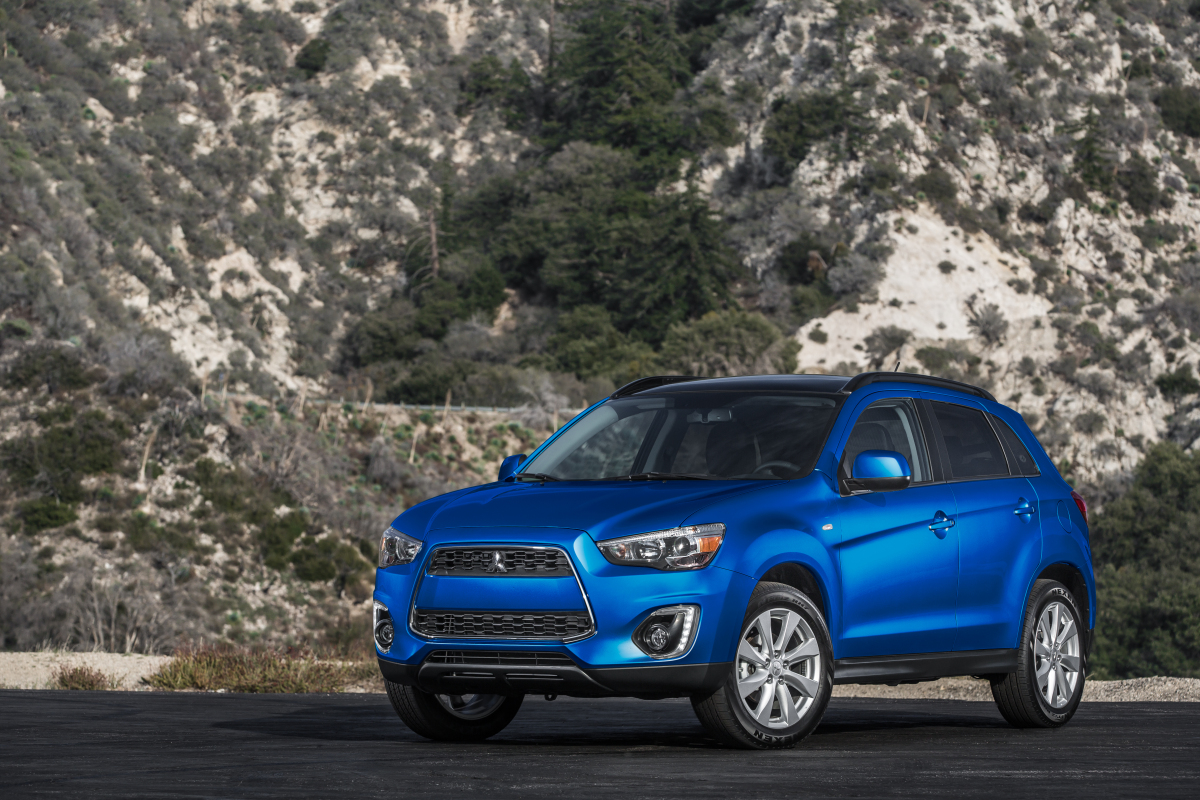 Mitsubishi Outlander Sport 4WD
24/30/27 mpg
MSRP: $24,195
Mitsubishi has been paring down its lineup over the last few years, but the Outlander Sport is still worth consideration. The small crossover is Mitsubishi’s best-seller and features the company’s “All-Wheel Control” four-wheel-drive system as well as a continuously variable transmission (CVT). The CVT features programmed steps so it acts like a 7-speed automatic but still returns good fuel economy. Also standard is a Reinforced Impact Safety Evolution (RISE) patented safety body construction system that absorbs energy, providing better protection to occupants in case of an accident. 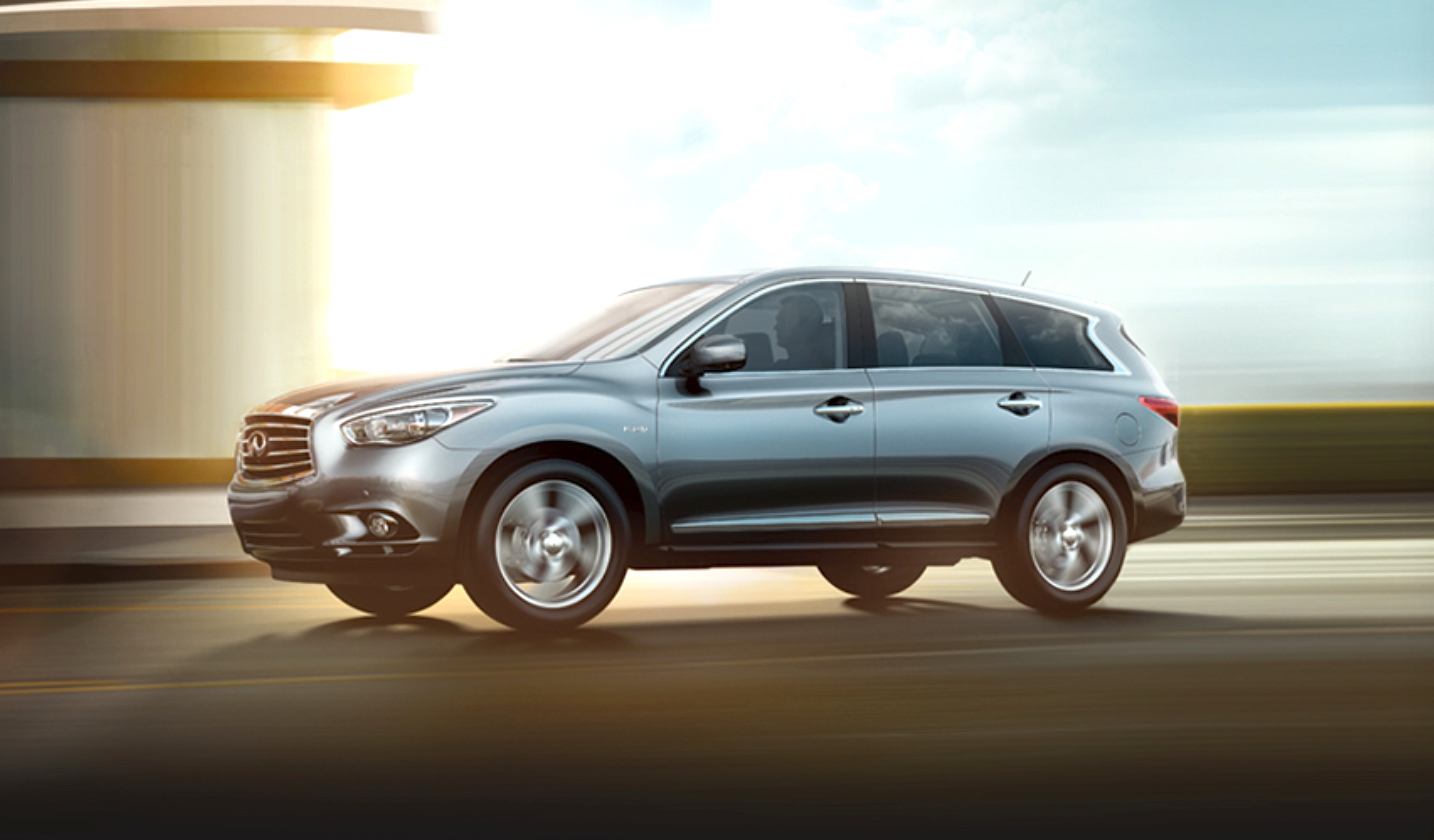 Infiniti QX60 Hybrid AWD
25/28/26 mpg
MSRP: $46,800
The QX60 Hybrid is the third hybrid in the Infiniti lineup and offers all of the luxury amenities of the standard QX60 SUV but with fuel economy improved by 24%. The combined grunt of the gas engine and electric motor is 250 horsepower, and with as much as 28 mpg on the highway, the QX60 Hybrid can travel more than 500 miles between fill-ups. 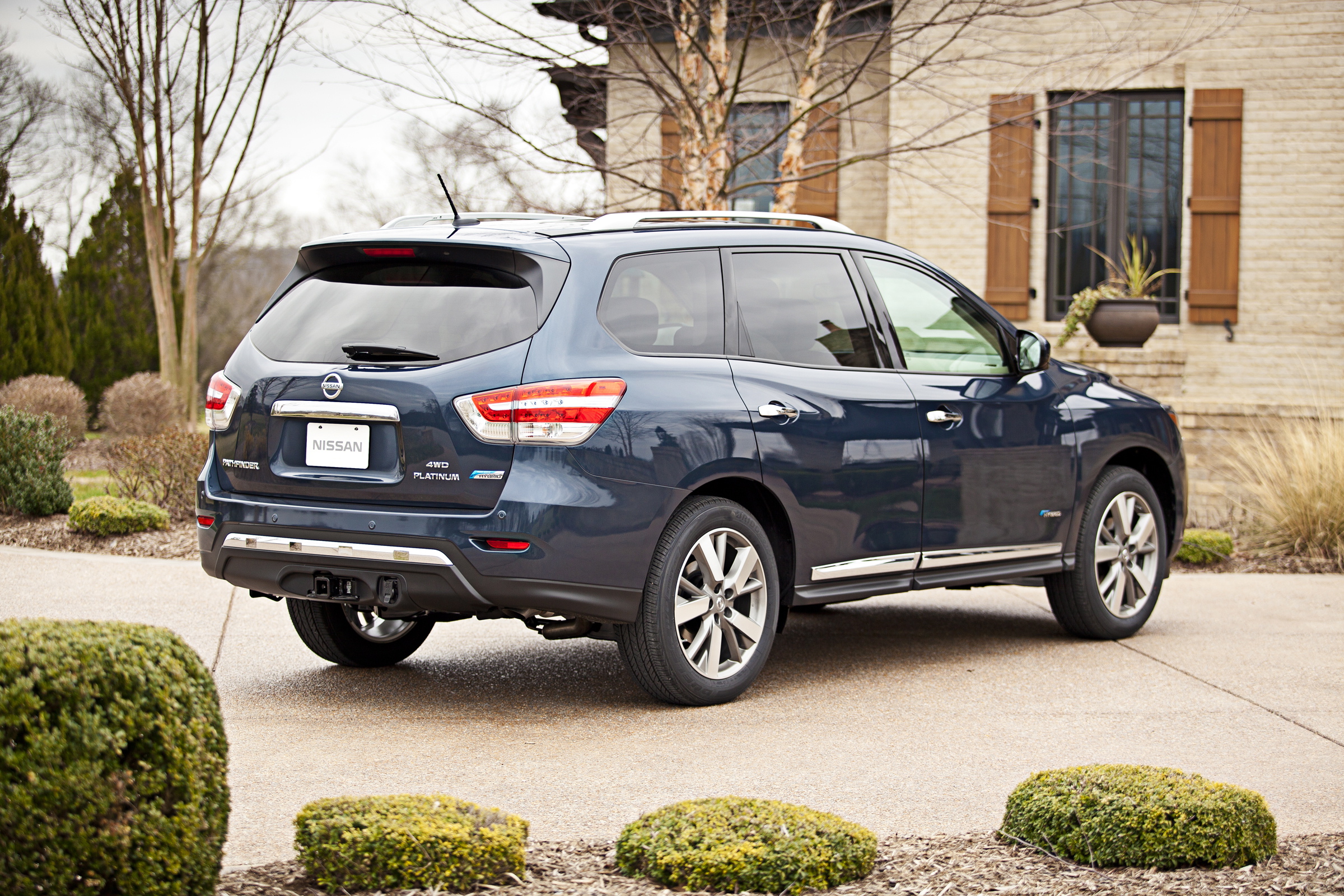 Nissan Pathfinder Hybrid 4WD
25/27/26 mpg
MSRP: $43,100
Nissan’s Pathfinder was completely redesigned for the 2013 model year, and for 2014 the company introduced the hybrid version of the 7-passenger SUV. Pathfinder Hybrid is powered by a 2.5-liter gasoline engine combined with an electric motor for a net of 250 horsepower. The hybrid is also capable of towing up to 3,500 pounds. 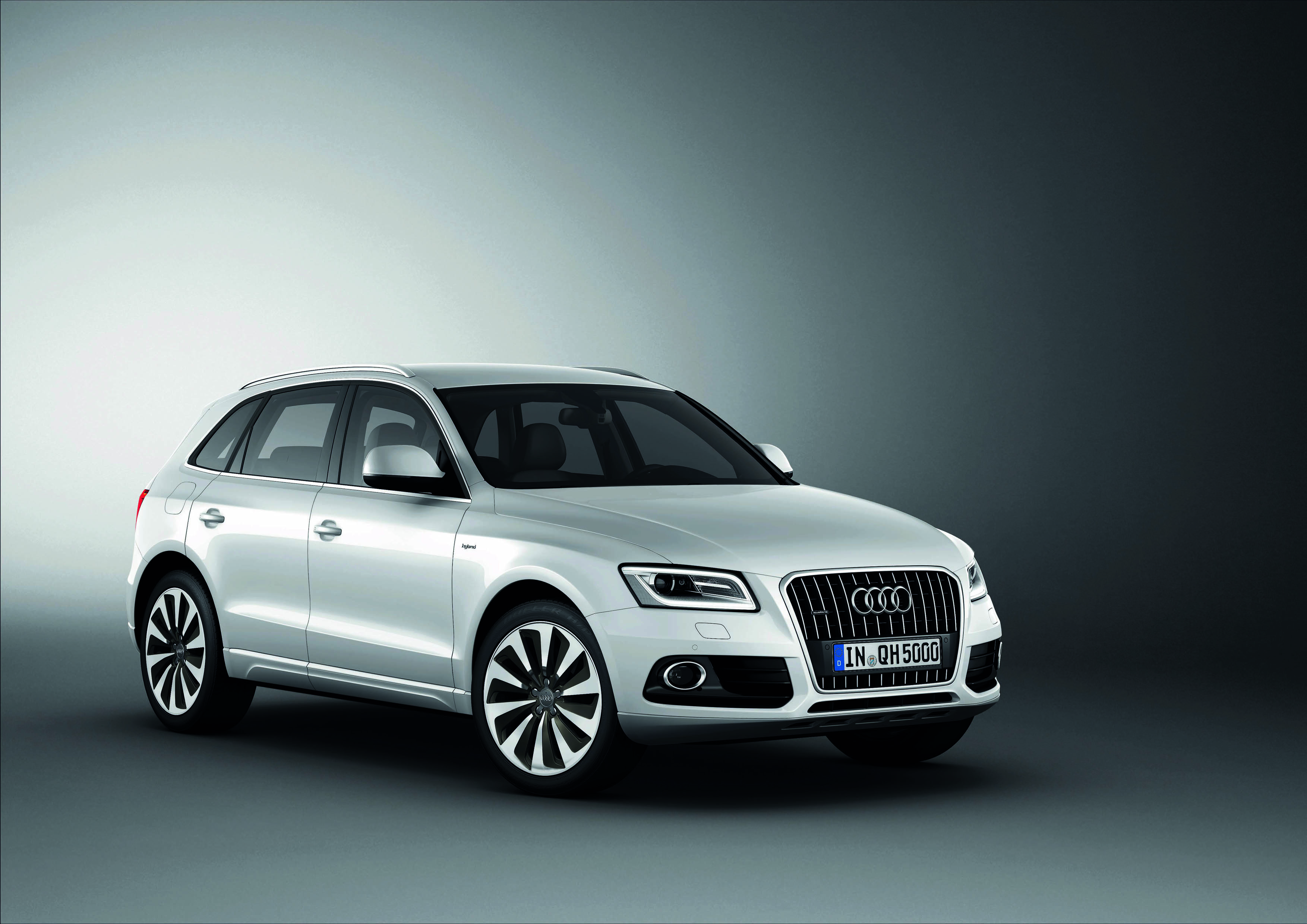 Audi Q5 Hybrid Quattro
24/30/26 mpg
MSRP: $51,900
Fuel-efficient Audis had always utilized the company’s miserly diesel technology, but with rising demand in America for hybrids, it made sense for Audi to create a hybrid version of the popular Q5. But unlike many hybrids that are built with only fuel economy in mind, this one uses the hybrid system for performance as well. With the 2.0-liter engine combined with a powerful electric motor, the Q5 Hybrid puts out a total of 245 horsepower and 354 lb-ft of torque.